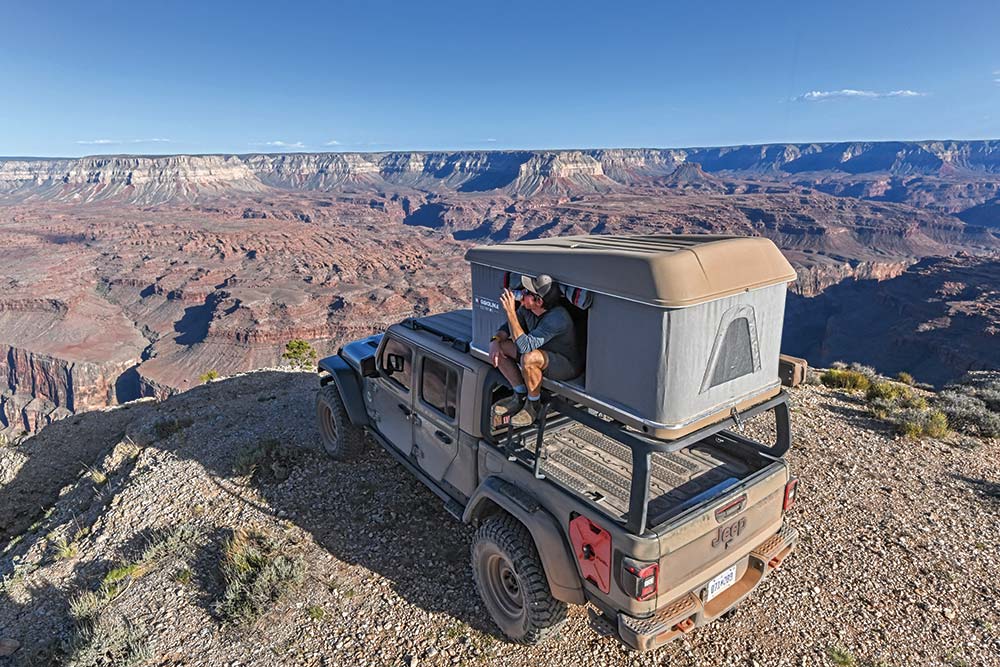 The Ultimate Way to Overland the Grand Canyon

The moment one looks over the edge and out to the horizon at the Grand Canyon is always an emotional one, whether it’s the first time or the tenth. However, looking over the edge and out to the distance from the North Rim away from all structures and people is both centering and life-changing. Immediately one understands why the Grand Canyon is one of the Seven Natural Wonders of the World, and why it’s the ultimate overlanding destination.

When asked if I’d be interested in joining a small group of overlanding journalists on a trip through the North Rim Grand Canyon to Overland Expo West, I couldn’t say no. I’ve been to the Grand Canyon once before with my family, doing the tourist South Rim trip. While it included a fun train ride where we were “robbed” by bandits, the North Rim trip blew that one out of the water. Removing walls and information plaques for spatial awareness and careful stepping was a no-brainer and an experience I will cherish.

The trip was organized for our group to test out the newest features on the OnX Offroad app and the latest Dometic GO products. There is no better way to test any product than a hands-on experience in the field with colleagues. 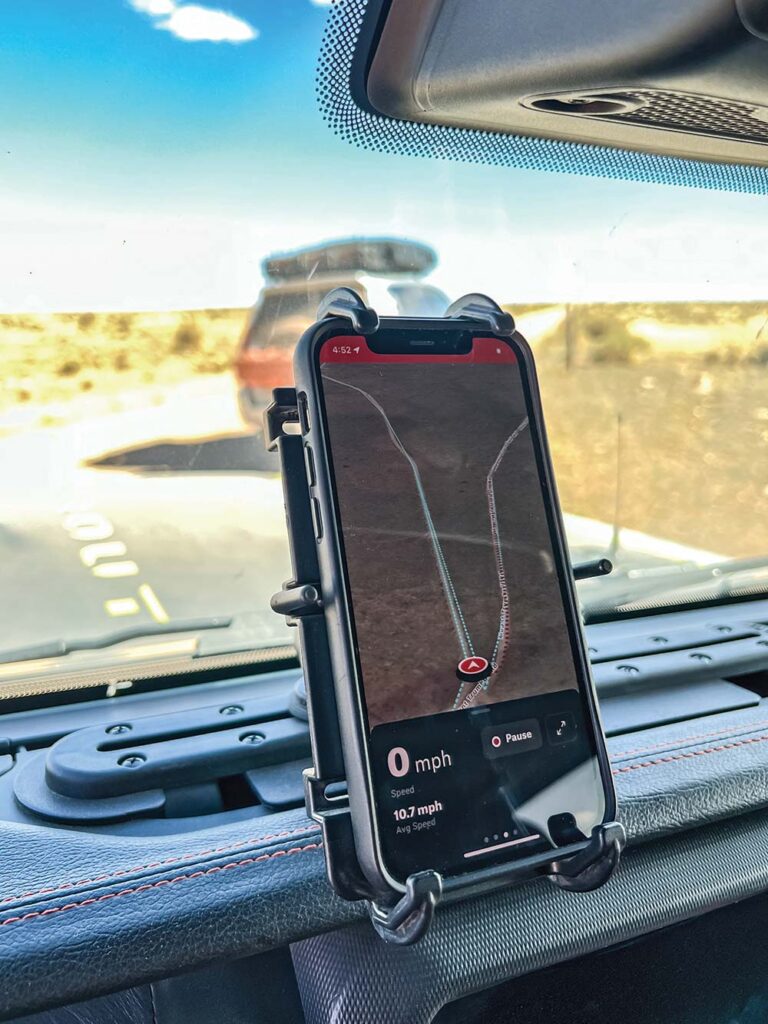 The group met up outside of St. George, Utah, to immediately hit the dirt. We were asked to bring up the OnX Offroad app on our devices so our leader could share the trip waypoints, one of the new features. With the touch of a button, the waypoints notification showed up in my phone, and I excitedly accepted them. They quickly saved to My Content where I could reference them over the next few days.

Now if you haven’t used OnX Offroad before, it’s definitely worth checking out. While many of my friends use other mapping software/apps, OnX Offroad came out at just the right time for my appreciation. From the jump, I found it user-friendly and easy to navigate. I can move around the map within the app to get an idea of an area before I travel there. And I really like the ability to download maps of areas I know I’m traveling through to access them when my phone is offline. Add in another new feature, tracking, and it just keeps getting better.

Before we took off from the meeting spot, I turned on the tracking and off we went. While the tracking recorded, I could still see the trail on the map and my exact location. And going back now to the saved track, I can see our elevation changes, distance traveled, time spent, average speed, and more. Unfortunately, I left it on all night while at camp, so the timing is off. 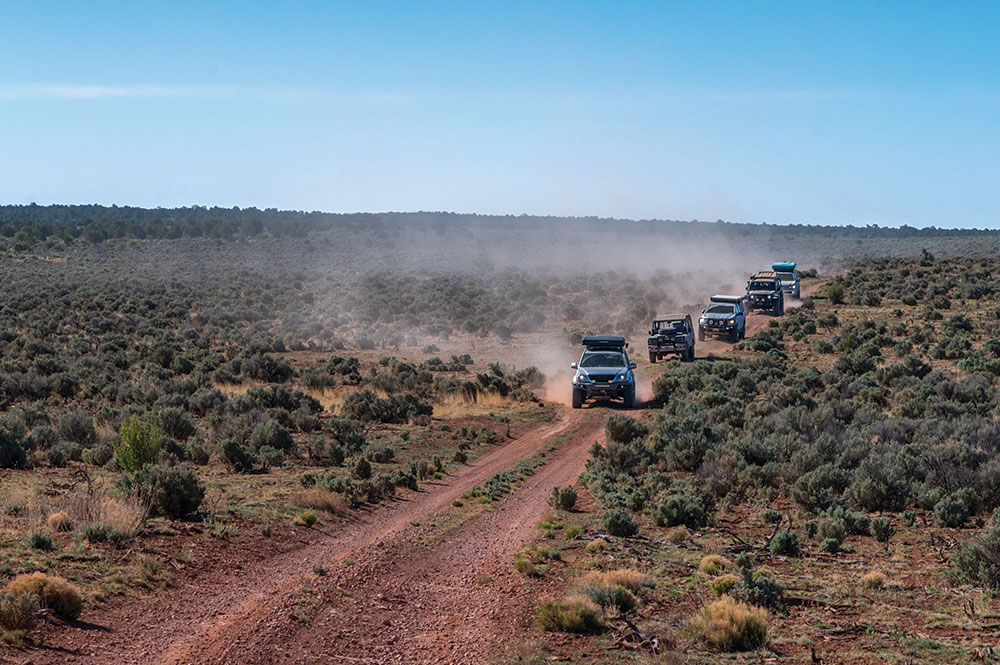 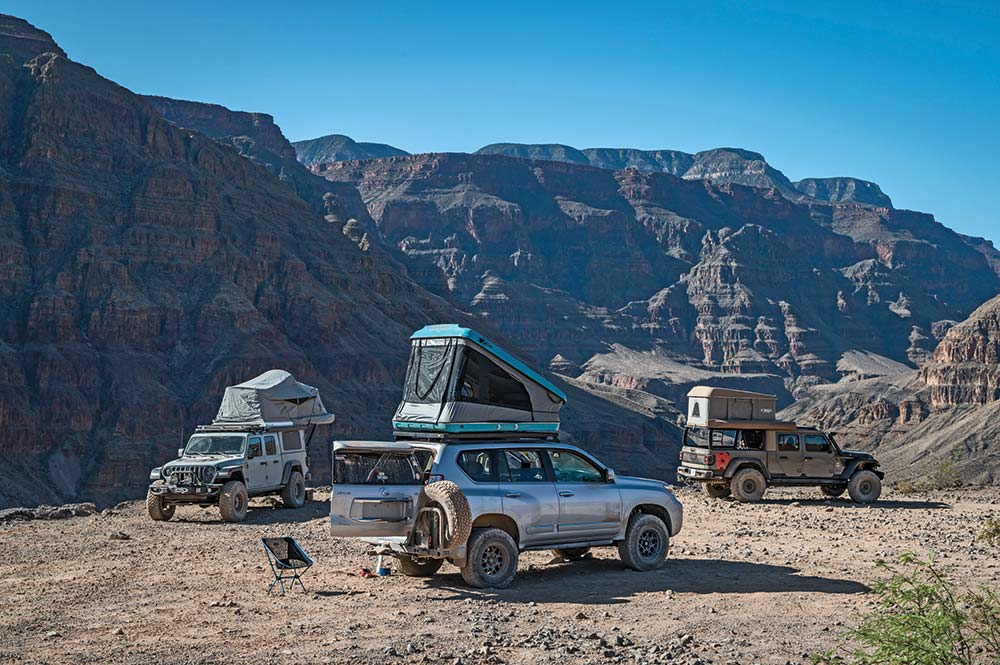 Comfort With A Grand View

We reached our first campsite at night, but you could tell that we were going to be amazed with an epic view when we woke up. Spaced out just enough to be on even ground and feel like we had personal room, we set up camp and cooked dinner. I got a first-hand demonstration of the new iKamper Disco Series where Matt Glass cooked us up some delicious stir fry.

We set up the Dometic GO camp chairs, bench, and tables and commented on how they were more comfortable than expected. We washed our hands using the Dometic GO Water Faucet hooked up to the water jug. I was impressed with the versatility allowed for the water faucet with the magnetic puck. Owen, Dometic GO’s engineer, made use of a RAM mount to extend the Water Faucet out a bit from his Land Rover Defender, Sarge. It provided the perfect spot to wash hands, fill up a pot, or anything else that needed water access. The water jug remained tucked away in the trunk and fresh water flowed with a simple finger touch.

When we awoke in the morning, we truly experienced the Grand Canyon. The view from our camp spot was unbelievable. We enjoyed breakfast while watching whitewater rafters get helicoptered out of the canyon to Barton Ranch. Six passes of that helicopter never got old, as it emerged from the rim of the canyon, then up and over our heads. Camping right at the edge of the Grand Canyon made that morning’s coffee taste a tad better than usual, but we didn’t want to delay packing up as the heat of the day was quickly approaching.

Matt Swartz enjoys a refreshment with a view. 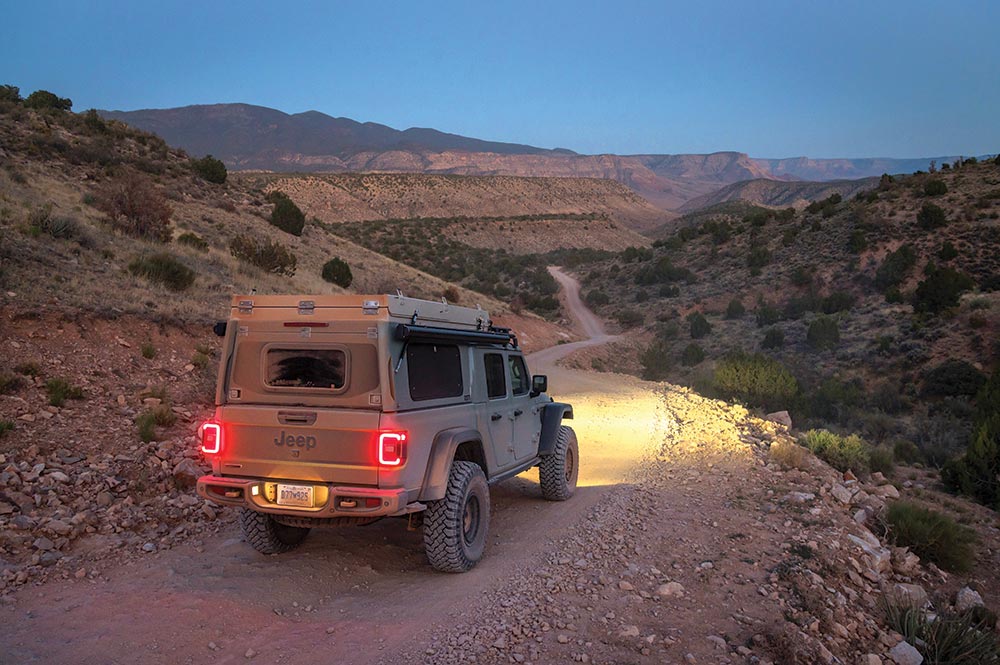 The Jeep Gladiator Farout concept makes its way along the trail to the campsite.

Back in our vehicles, we went and off to our new campsite we headed. We backtracked a bit to the old schoolhouse where we pit stopped for lunch and a rest. The dogs wandered the grounds, while the guys compared this spot to their experiences in Australia. Apparently tin awnings and men in cutoff jean shorts seem to be a popular sighting Down Under.

Our next stop was next to a beautiful field where we got a lesson on water sanitization and an explanation of how the design of the new Dometic GO Water Jug adheres to sanitation practices. Filtered water poured straight into the jug is kept safe and clean for the entirety of its use, a great feature. The design and size of the jug allows for two to stack perfectly and fit in a space made for a jerry can holder, giving the user 22 liters of fresh water in an easy-to-clean vessel. 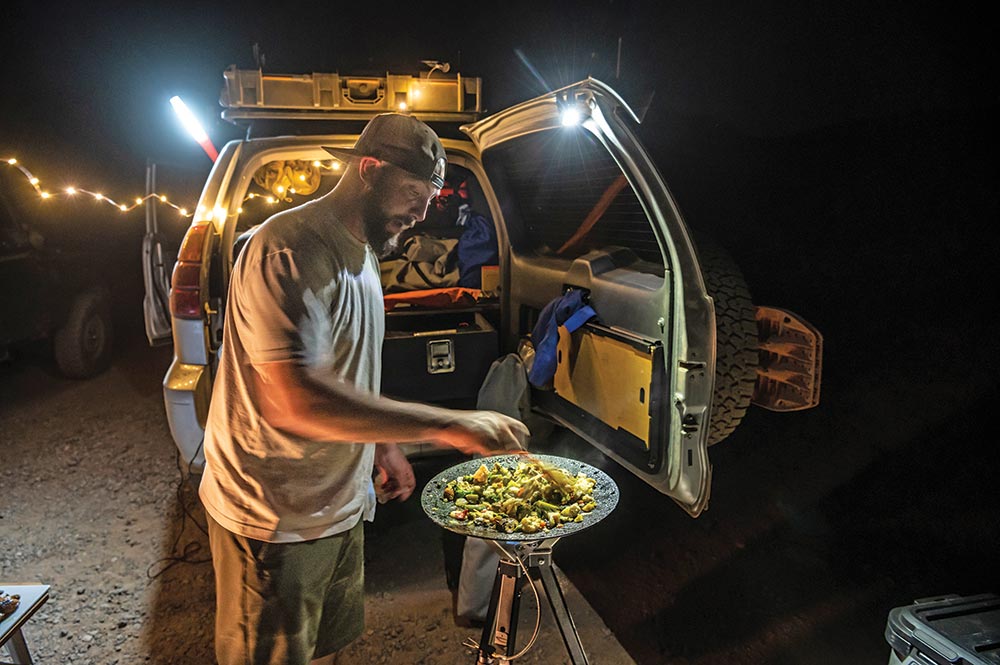 Matt Glass cooks up stir fry for dinner on the iKamper Disco Series.

From that area we continued on our way down dirt roads to our next camp site. Now while we were still along the North Rim, this second spot had a view that could not compare. We camped right up at the edge where we could put the chairs at the canyon’s rim and gaze off into the distance at the Grand Canyon in all its glory. Not a single other person around created feelings of how early pioneers and the natives of the land may have felt. Cameras were out, and everyone worked towards getting amazing shots of their vehicles with an unbelievable backdrop.

Luckily we got to the second spot with the sun still up, so we got to enjoy the view here for much longer—and it never got old. The sunset provided an orange sky to capture more epic shots of our camp before we enjoyed some tacos for dinner and a few cold ones. I even got my first exposure to Starlink on the edge of the Grand Canyon. I wouldn’t want it any other way. The guys all called home to check in with their families, while some of us texted friends and loved ones to share some of the bewilderment experienced. While we were a bit concerned with the wind picking up, it was never a problem, even on the exposed cliff we picked for our campsite. 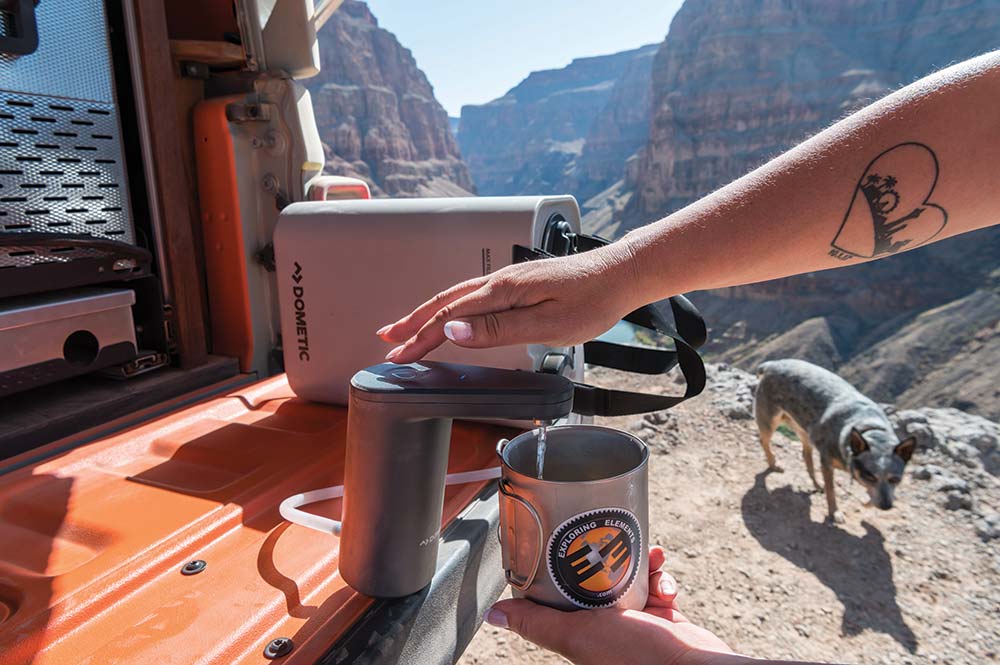 Author, Kelly Nomura, serves herself some water from the Dometic Go Water Faucet.

Waking Up To Mother Nature’s Beauty

My greatest takeaway moment from this trip was waking up that next morning in my rooftop tent to look out the window and see the most epic view of the Grand Canyon – that is what overlanding is all about: an unforgettable view away from all civilization, shared with friends and good company.

I didn’t want to leave, but we all needed to get into town to wash rigs before they went into booths at the Overland Expo West. So after some coffee and quick bites, we packed up and headed out to hit the highway on time. While we left clouds of dust behind us, we forged ahead in our day, taking with us memories of one of the most epic cliffside views. From that spot on the North Rim, it is quite evident why the Grand Canyon is one of Nature’s Seven Wonders of the World and one of the ultimate overlanding destinations. 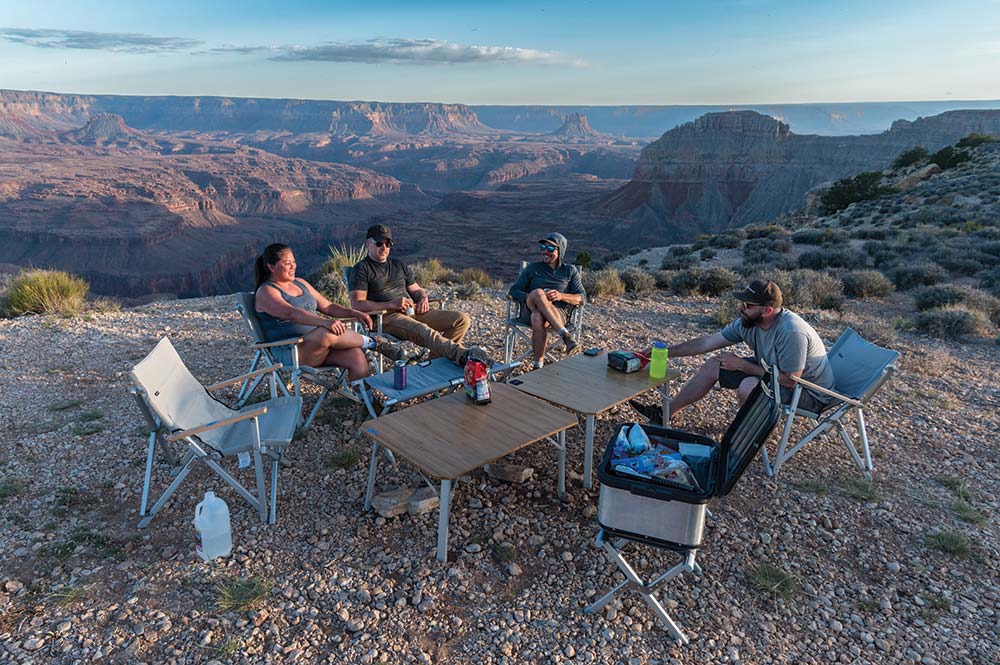 The group enjoys some afternoon snacks at the second campsite on the North Rim Grand Canyon. Sarge, the old military Land Rover Defender, needed extra fuel before we made it out of the park. Luckily, the spare fuel container was full and put to use. 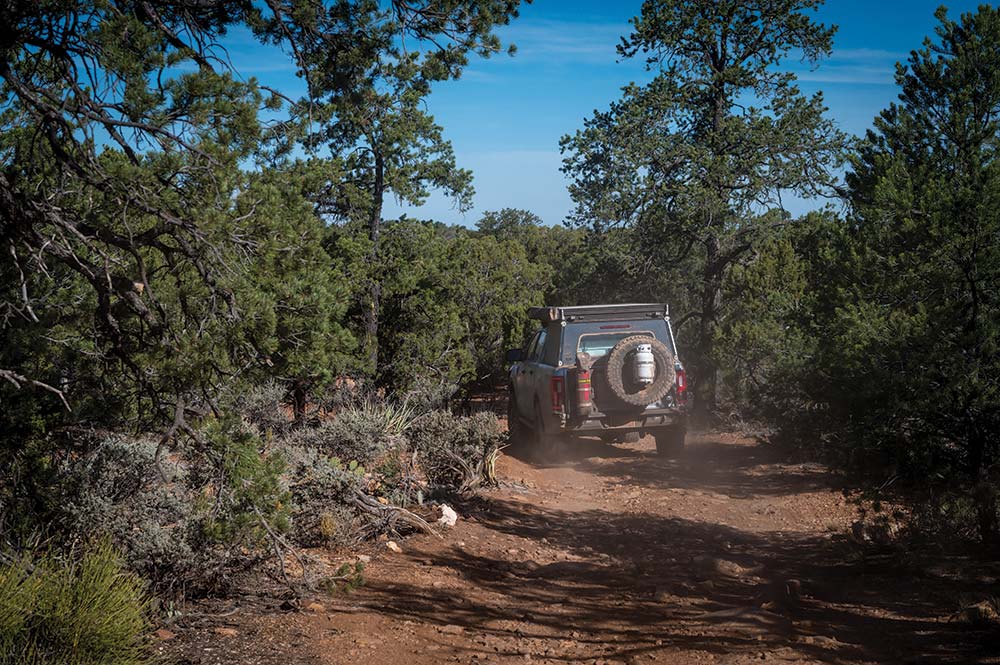 The trail to the second night’s camp twisted and turned, tight with trees on both sides.

Everyone has heard of the Grand Canyon. With its ancient geological formations, this great canyon has captured the attention of humanity for more than 10,000 years. From native tribes sharing their oral traditions to the comments of President Teddy Roosevelt himself, the Grand Canyon has always been a fixture in America.

Roughly 5.9 million people visit the Grand Canyon every year, making it the second most visited National Park in the country. But did you know that there’s an entire portion of the park that only 10% of tourists ever visit?

The North Rim of the Grand Canyon is more remote, less trafficked, and wilder than its southern counterpart, making it a haven for overlanding. Despite being only ten miles away from the more popular South Rim, reaching the North Rim presents some challenges. The canyon itself is more than a mile deep and stretches over 277 miles. This means that to get to the North Rim from the South Rim, there are only two options.

The first is to make the 215-mile, 5-hour journey from one side to the other by car. This route takes you east, around the canyon. The other option to get to the North Rim involves a 21-mile “Rim to Rim” hike that is not for the faint of heart. This trek involves an overnight hike; one that takes trekkers from the top of the South Rim, down to the Colorado River, and then back up to the top of the North Rim. That means a 4,860-foot elevation loss on the way down to the river, and a 5,850-foot gain on the way back up. To really be successful and get the most out of this hike, it’s a good idea to train and prepare in advance.

Inside the park, the North Rim Lodge is one of the main lodgings. The entire North Rim has a shorter summer-only season than the South Rim, but the lodge offers both rooms and cabins. For stargazers, the Grand Canyon Lodge is the perfect place to come and stay. The lodge is fully committed to Grand Canyon National Park’s efforts to protect the landscape from light pollution. Excessive lights like those found in bright cities negatively impact nocturnal wildlife and diminish any view of the night sky.

Scenic Drives on the North Rim

On scorching hot days or when you’re just looking to relax, the North Rim has the ultimate scenic drive. On this sprawling drive with pullouts, there’s no end to the vistas and sights to see. Notably, the North Rim Scenic Drive can take you to both Point Imperial and Cape Royal.

Point Imperial is the highest point on the North Rim, at an elevation of 8,803 feet. This outlook overlooks the Painted Desert, where you can see even more layers of red and black Precambrian rocks. The eastern end of the canyon is on display beyond Point Imperial.

Cape Royal also provides unlimited vistas and panoramas of the Grand Canyon. With spectacular sunrises and sunsets and views of the Colorado River and Angels Window, you’ll be sure to take in the full scope of the canyon’s beauty.

With campgrounds available for RVs and winter camping available with a backcountry permit, the North Rim of the Grand Canyon has something for everyone—everyone who is willing to take the journey.

January 16, 2023 is one of five free admission days to all United States National Parks in 2023! Find your park and get exploring!

Editor’s Note: A version of this story previously appeared in the Tread September/October 2022 issue.