→ Submit your rig and win a Tread magazine feature of your truck! ←
Get the Magazine
Features, Trucks, Vehicles
Story by Mark Porudominsky

Overland(ish) Chevy Does It All 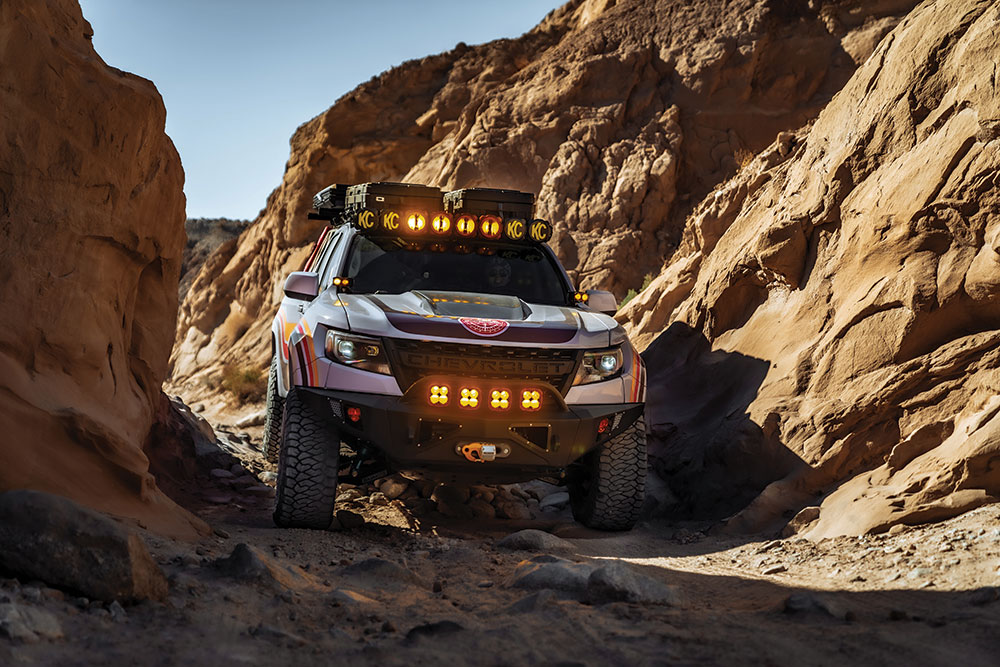 It’s a crawler, it’s a pre-runner, it’s…an overlander? At first glance, this wild Chevy Colorado looks like some sort of race truck or maybe a tricked-out rock crawler. Then, you realize… this truck has a long bed, a roof top tent, gear cases on the cab roof, and it’s is packed with enough gear to go off grid for months. This thing is an overlanding rig. Or, well, Overland(ish). 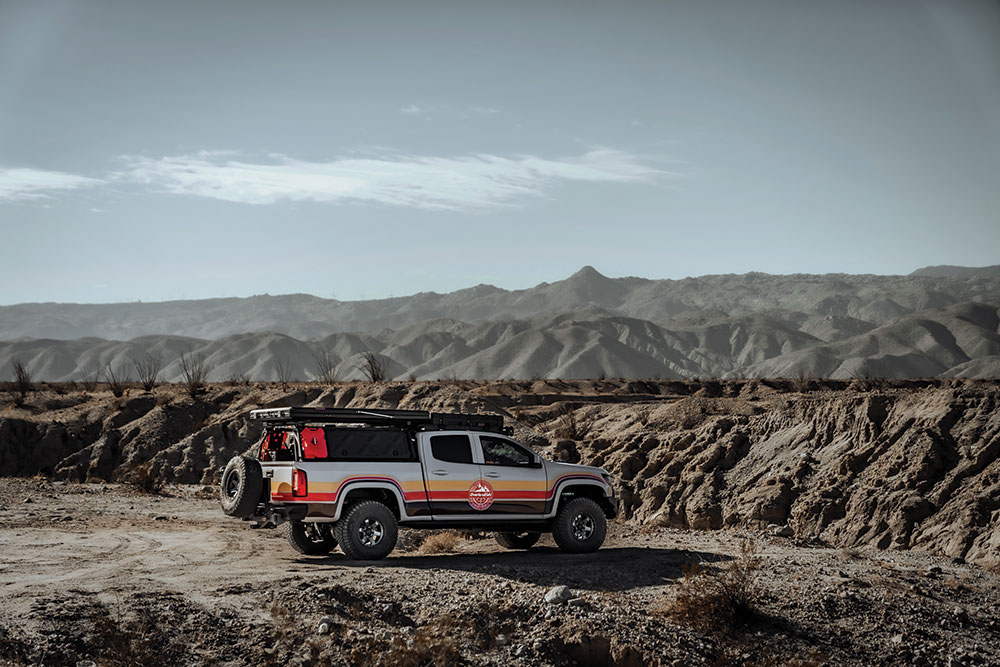 Ready for adventure, the Chevy Colorado uses a Leitner Designs Forged Active Cargo System and GearPods to store plenty of gear for any destination.

Pronounced [OH-ver-LAND-ish] (adj.), it comes from the Germanic language and describes an overlander who identifies as a pre-runner or rock crawler but still dons a roof top tent and packs their pour over coffee, skottle, full-size hibachi-style grill, and all of the creature comforts of home.

“Does that race truck have a shower on the back of it? That’s the most Overland(ish) thing I’ve ever seen.” 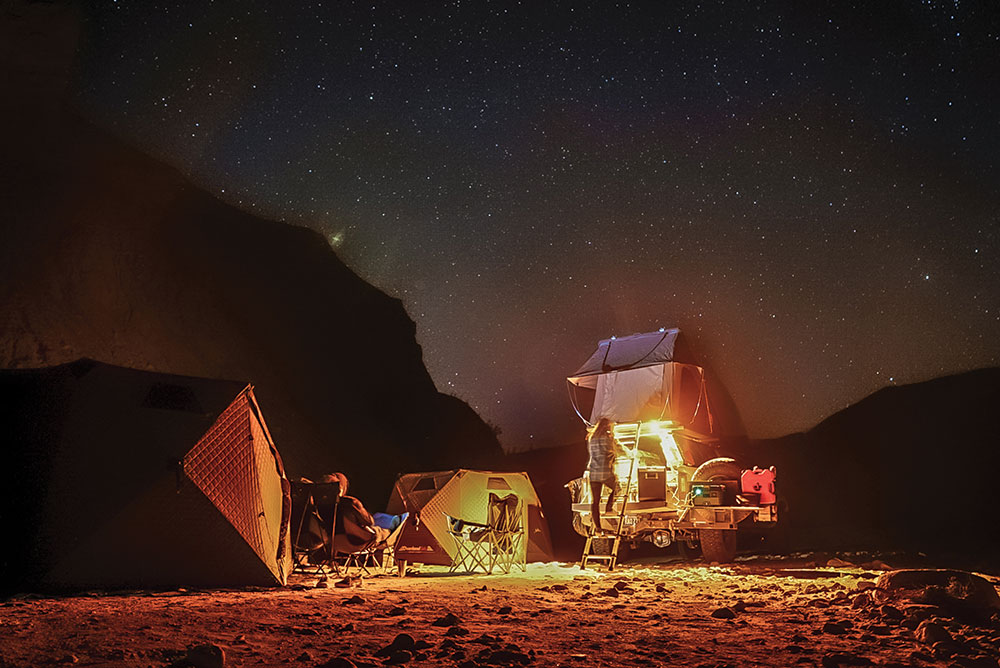 Owning a tent company helps when camping with friends. While Girgis and his family sleep in the rooftop tent, they can set up the ground tent for others.

One might think the builder of this creation is confused or just can’t make up his mind, but in fact, Matthew Girgis knew exactly what direction he was going when he went full tilt with this build. Girgis wanted a rock crawling, desert running, overlanding rig that can still act as a reliable daily driver.

So what does Matt consider himself? To answer that, all we have to do is check out the bright livery and logo on his truck for the tent company he co-owns. You will see “Overland(ish),” which perfectly describes the amalgamation of styles all wrapped into one.

Being an overlander, though, means that Girgis has all the essentials. This includes tons of storage in his twin 83L Roam Adventure Co. rugged cases and a Leitner bed rack with dual Gearpod XLs with an Overland(ish) Summit roof top tent on top. 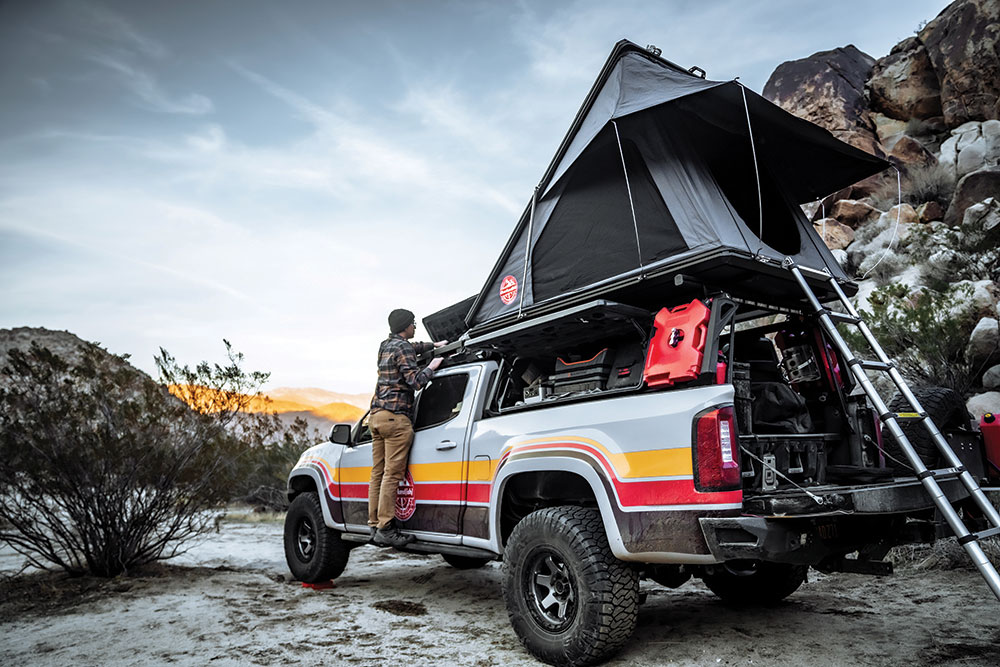 An Early Love for Camping

From the first time Girgis hit the dirt in Anza-Borrego, California, as a kid with his dad, he was hooked on off-roading and camping with his family; it’s only logical he got into the overland world. While his dad inspired him to go off-road, it was Girgis’ passion for travel and photography that pushed him to build such an extreme rig.

Following in the footsteps of his father, who owned a Chevy, he jumped into a 2017 Colorado and went nuts. He made an incredibly versatile overland vehicle that can camp for as long as he likes, and then turn around and run the desert at high speeds. Girgis loves the feeling of the suspension articulating and tackling the rugged terrain of his favorite spots, like Anza-Borrego. 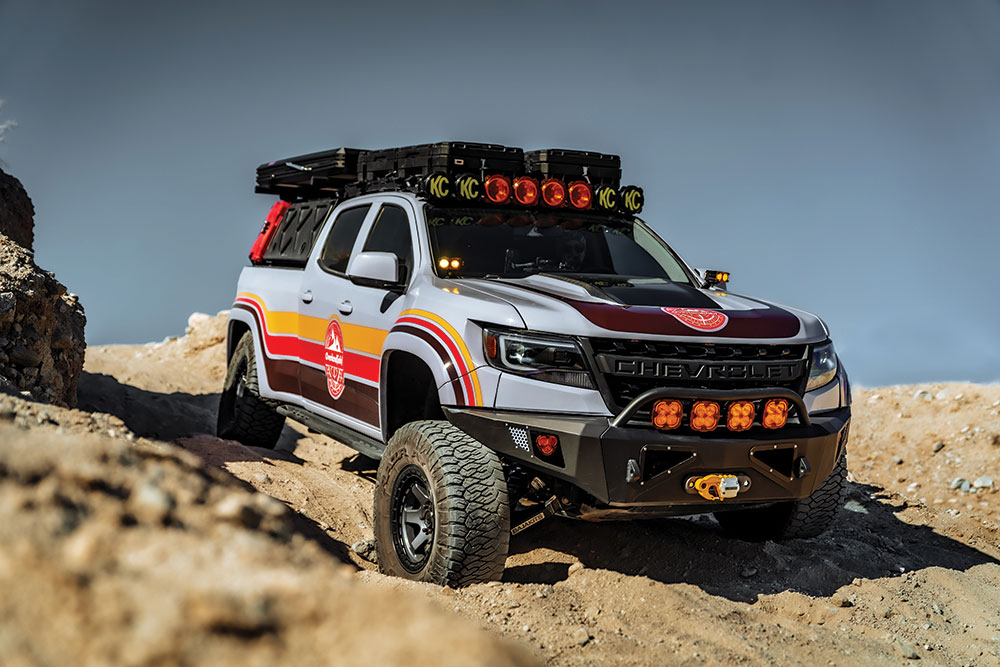 Girgis’ passion for off road combined with his passion for photography and videography came together in 2020, when he co-founded a small company called Overland(ish). Girgis says, “The true identity of Overland(ish) is rooted in just having fun, being goofy, making fun of ourselves and overall just having a good time.” He continues by saying, “We make content that doesn’t take itself too seriously and gear that does. We made so much fun of ourselves for having all these amenities from home that we ended up making tents that seem more like hotel rooms for the outdoors…what could be more Overland(ish) than that!”

Along with running Overland(ish), Girgis also lends his photography skills to outlets like Tread, industry partners, and Sprinter Overland Trips. Tread has used his talents for several features; it helps when the photographer truly understands his subject matter. Girgis can capture the right look and vibe of an overlander or off-road enthusiast because he is one himself. As lead photographer with Sprinter Overland Trips, this same notion applies. He captures Sprinter owners enjoying their time in the outdoors, challenging themselves with tougher terrain, and having a great time with friends and family.

When you look at Girgis’ creation the first things you notice are the lights, the wrap, and the wheel and tire combination. KC Hilites is responsible for the truck pumping out more lights than the Vegas Strip. Controlling those lights are two SwitchPros 9100 series controllers that Girgis set with custom settings. Josh Daley of Daley Visual was able to take inspiration from an iconic ‘80s race car and make a striking wrap that blows minds and gives that nostalgic look that makes us smile when we see it.

The 17×8.5 Fuel Block wheels wrapped in 35 x 12.5 Maxxis RAZR A/Ts finish off the look and give this wild ride its style and its grip. King shocks and secondary bypasses paired with Baja Kits and Timbren give this beast its ability to rip through all the whoops in the desert like a bat outta hell. An MBRP full exhaust gives this truck its rumble, and the custom wide Fiberwerx fenders let Girgis stuff those big Maxxis 35s in there and get that coveted stance every off roader strives for. The Baja Kits suspension provides enough long travel and up travel to ease the Z71 over rough terrain. 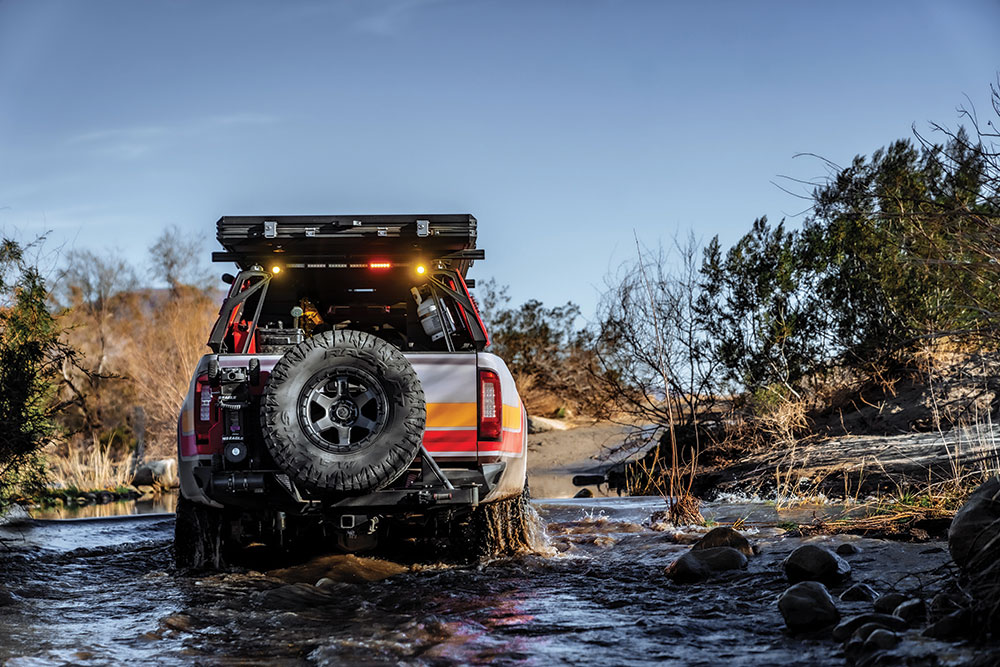 Anza-Borrego , California, offers plenty of scenic terrain and is one of Girgis’ favorite destinations.

Being an overlander, though, means that Girgis has all the essentials. This includes tons of storage in his twin 83L Roam Adventure Co. rugged cases and a Leitner bed rack with dual Gearpod XLs with an Overland(ish) Summit roof top tent on top. In the bed, Girgis uses the Decked drawer system for all of his photo gear and more. On top of that is his Overland(ish) Basecamp insulated tent along with his full camp kitchen, all the way down to the kitchen sink, or in this case an EZ-sink.

The Cement color paint on the truck offered a clean look, and would better hide the inevitable pinstriping from the tight off-road trails ahead. A Midland MXT500 is mounted on the side for easiy accessiblity, while also being  tucked away. The SwitchPros 9100 control is also at arm’s reach. For recovery, Girgis has a 12,000-lb. DV8 Offroad winch mounted to his DV8 steel bumper, a full Deadman Off Road setup paired with some goodies from Factor55. His spare is mounted on a Rigd Supply Ultraswing with all the overlanding accessories, including a kitchen table. Also, in case the need arises, Girgis has a Pro Eagle 1.5-ton jack on deck. For underbody protection, Girgis has a full set of CBI Offroad skid plates and rock sliders, an AEV differential skid plate, and 589 Fab shock skids so he can romp on the rocks worry free. His engine mods include an engine tune from Trifecta Performance and a cold air intake from S&B filters. A set of R1 Concepts brake pads and rotors provides his stopping power. A fullsize spare is mounted on the Rig’d Supply Ultraswing. 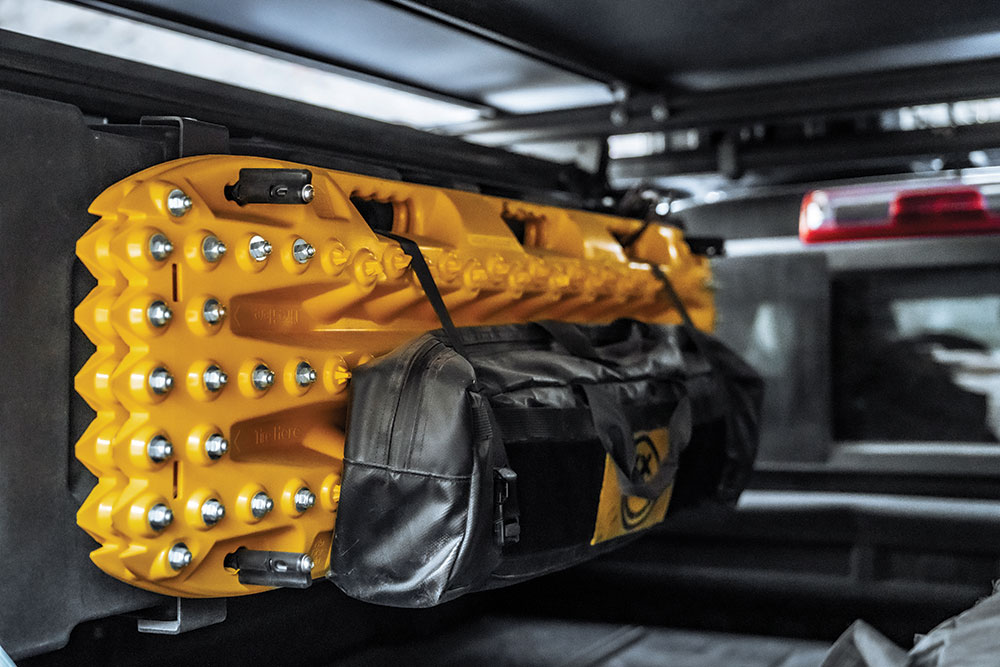 Behind the Leitner Designs GearPods, the Deadman from Deadman Offroad is securely mounted to Actiontrax recovery boards.

The overland goodies don’t stop with the outside of this crazy Chevy Colorado. Girgis uses Midland’s MXT 500 Micromobile Two-Way Radio, MXTA25 3dB Ghost Antenna and a pair of Midland handheld radios to communicate with all of his buddies. For interior storage he uses a ColoradoCanyonEnthusiast rear attic system and a set of Grey Man Tactical rear seat MOLLE panels. On the dash he uses a ColoradoCanyonEnthusiasts dashboard tray and 67Designs phone mount with carbon fiber arms and a 55 series rail. For extra power he has, not one but two, Blackfire portable batteries, one 500 watt and one 1000 watt, and a solar panel to charge them. They come in clutch when he is off grid and needs some extra juice to run his Dometic CFX3 45 all day. Hey, a guy needs a cold beer and maybe even an ice cream after running the desert all day. 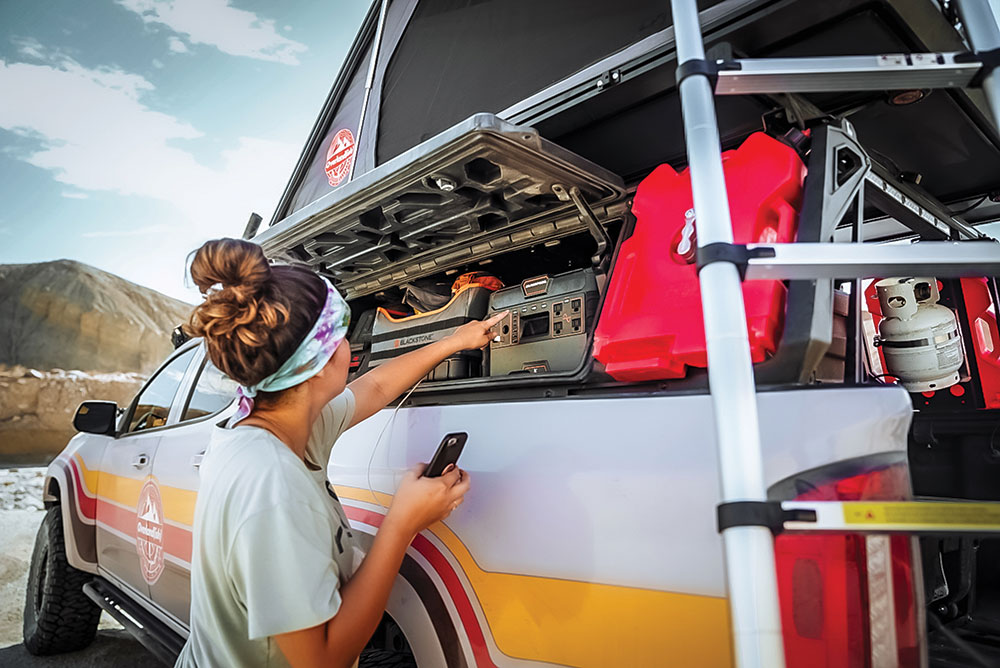 Sarah Girgis uses the Blackfire Portable Powerstation to charge her cell phone, just one of its many uses.

While his dad inspired him to go off road, it was Girgis’ passion for travel and photography that pushed him to build such an extreme rig.

Both Chevy prerunners and Girgis’ family camping trips inspired his plans for this 2017 Chevy. What came from that was this Frankenstein’s monster you see before you. Just like a real race truck, when something breaks (something always breaks) Girgis doesn’t just fix it, he upgrades it. Girgis puts in the wrench time himself, doing most of the installations.

He gets some help from Toys For Trucks, who installed his Baja Kits long travel setup, and DNA Wheels and Tires, who mounted and balanced his tires and keeps his truck aligned. Brandon from 1T4 Fabrication, who is responsible for keeping Girgis’ truck on the road (and off), rounds out the team. These shops and fabricators did some impressive things to Girgis’ truck, but there is more to come. His future goals and plans include a four-link suspension and full cage. Now that sounds like something we want to see!

To see more of Girgis’ overland rig doing its overland “ish,” be sure to check out his Instagram @Rad_Z71. Or visit his company page @Overland.ish. Matt and Sarah Girgis enjoy a campfire to keep warm with their Pug, Gus.