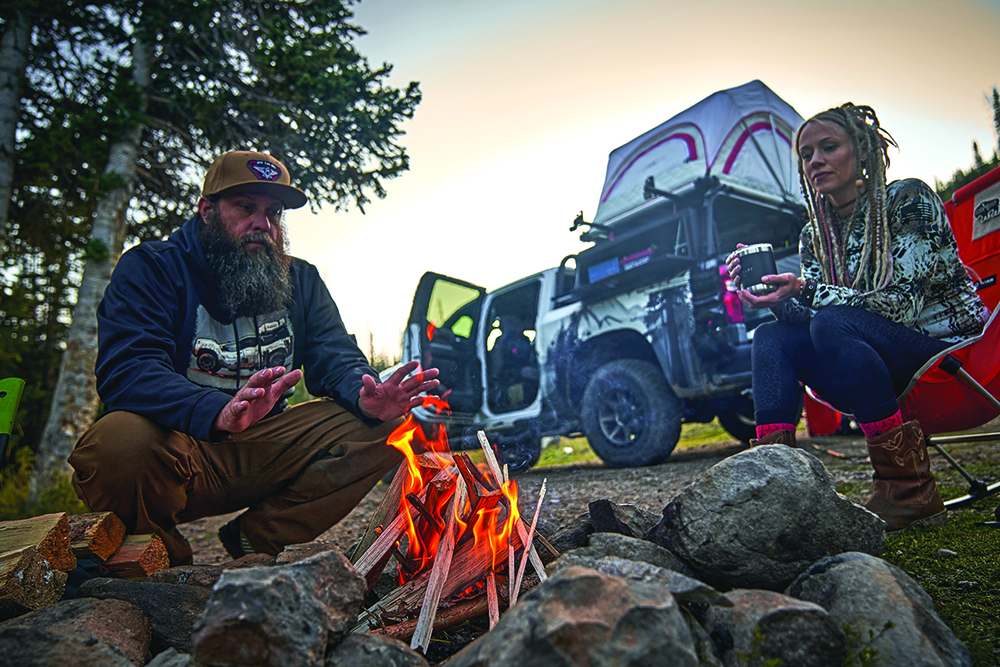 What happens when one of the biggest off-road aftermarket accessory manufacturers teams up with one of the “baddest” builders in the country? Well, you get an amazing build in the form of this 2020 DeeZee Chevrolet Silverado 1500HD Z71 4×4, built by the one and only Yeti Norvell. 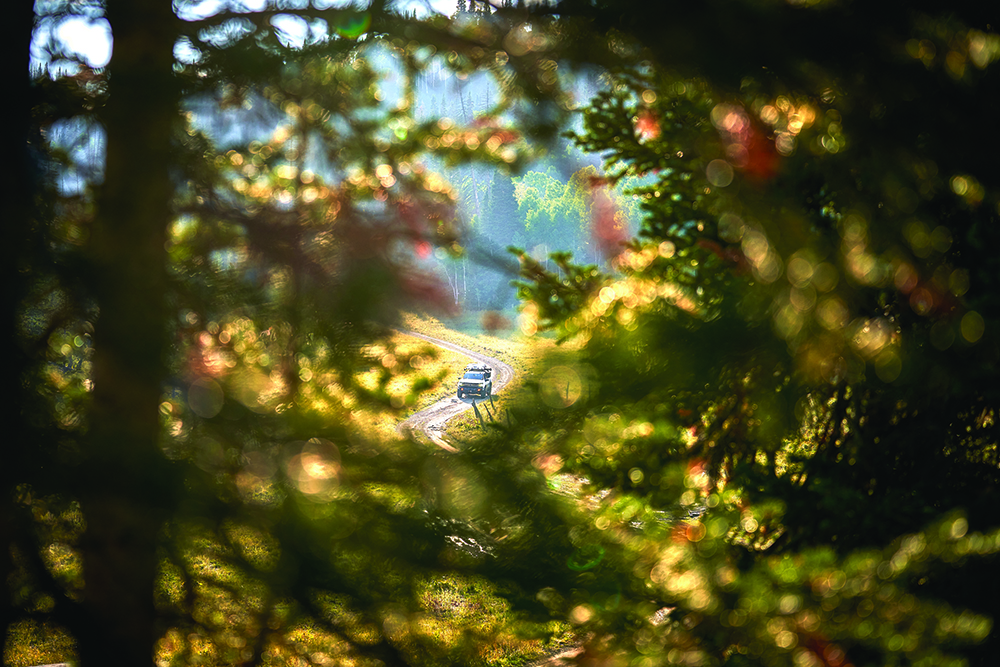 While Yeti grew up as a West-Coaster, he’s really come into his own with his blue-collar, country-boy lifestyle. A true adventurist, Yeti grew up doing yearly cross-country road trips in pickup trucks with campers, as well as tons of off roading and outdoor activities. This led to his true calling and lifestyle as an off-road, outdoor adventurist, developed over the last eight years. He and his lady, Yolo, set off pretty regularly to live out of their vehicles for months at a time.

“[The DeeZee Silverado has] traveled through 25 states—from exploring the high-altitude peaks of the Colorado Rockies and chasing after hot springs to bombing the Southwest to go bass fishing out of kayaks. It has also toured all the backcountry roads in the Midwest.” 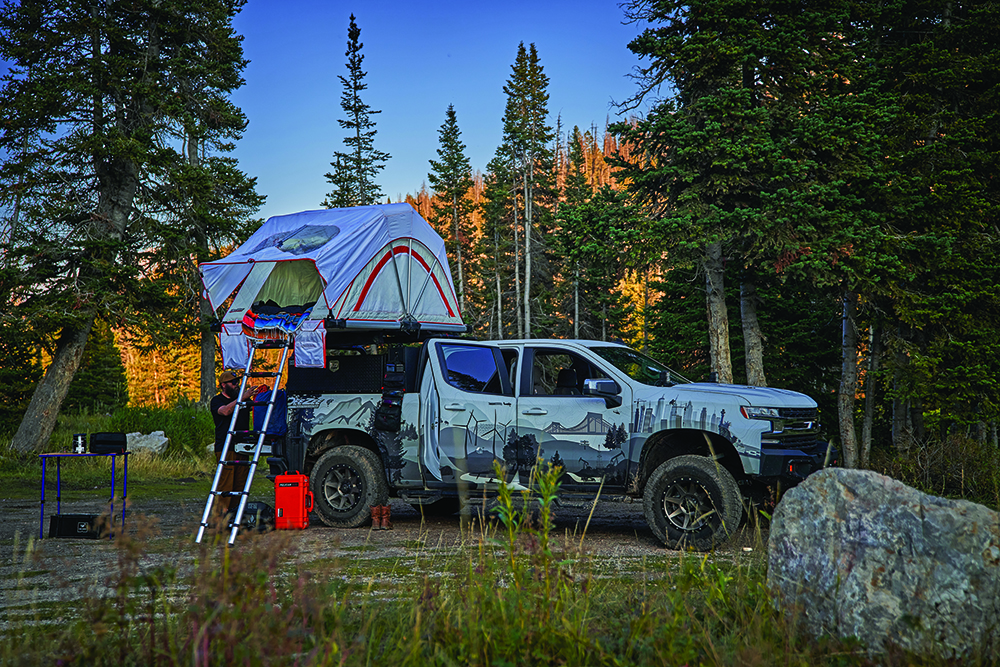 Yeti and Yolo have learned over the years how to pack efficiently, taking only what they need, even when they’re away for weeks.

Yeti Norvell found himself a life partner who loves the outdoors as much as he does. Since they met, Yeti and Yolo’s lives have been one long adventure, and it doesn’t look as if they’re slowing down anytime soon. You can catch them from coast to coast at many overland events—sometimes together, sometimes separately. But both will leave you with a lasting impression and a warm feeling.

The Man, the Myth, the Yeti

Yeti and Yolo call Montezuma, Iowa, home. There, Yeti set up a workshop in which he and Yolo both live and work. It’s also where this off-road “mad scientist” comes up with all of his wild ideas. For some of those ideas, he gets to partner with amazing companies to bring us standout builds. Many people know his epic dream builds, and the DeeZee Silverado Z71 is no exception.

“The truck was built, start to finish, in just three months by Yeti and his apprentice, Tony Lang, along with Josh and Bart from DeeZee.” Exploring Utah’s backcountry reminds Yeti and Yolo why they love the life they live. 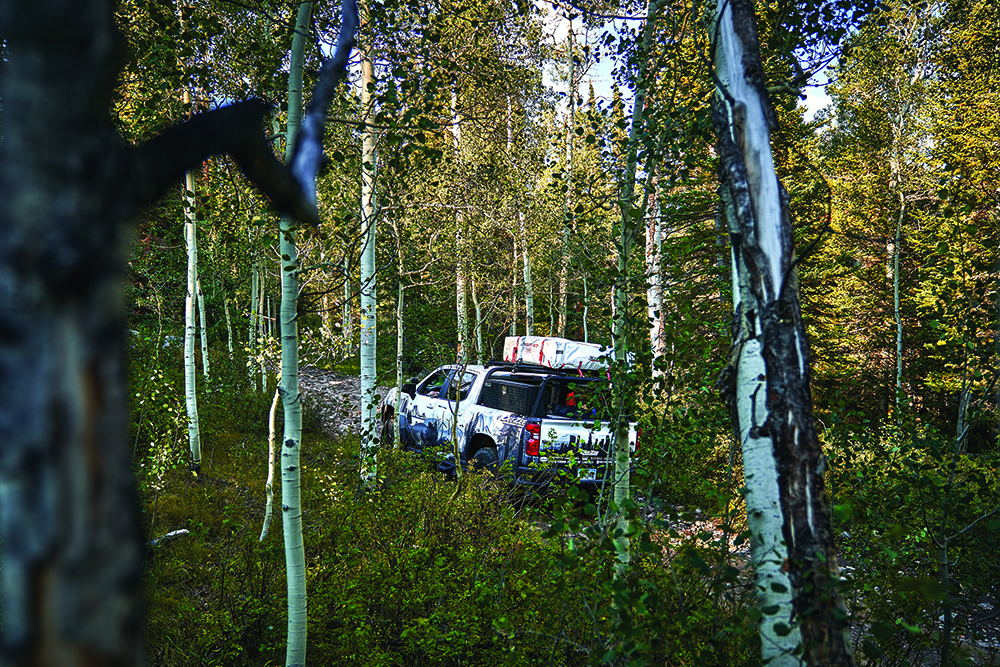 The Silverado hides among the trees and eases down the trails

The truck was built, start to finish, in just three months by Yeti Norvell and his apprentice, Tony Lang, along with Josh and Bart from DeeZee. With the motto, “Work Hard, Play Hard” as inspiration, the Silverado was built to be a workhorse and family vacationer. This jobsite hero also has the dual purpose to go hard on the trails and set up to be a sweet camping rig on the weekends, thanks to the modularity of the DeeZee product line. A proper cell phone holder to use the OnX Offroad app helps keep Yeti and Yolo on track to their desired destinations. 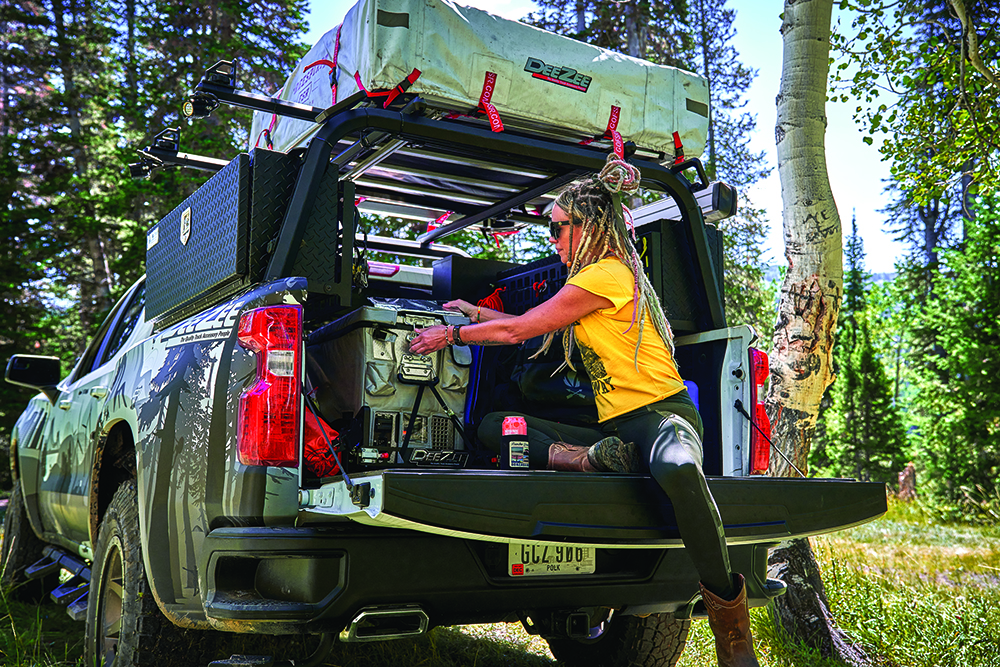 Yolo can easily accesses the fridge during a quick pitstop.

Not only do the DeeZee storage systems work hard on the jobsite, they also help Yeti play hard on weekend getaways or long-haul road trips.

The DeeZee Top Siders provide storage on the bed rack system, while the under-seat storage box holds more gear. The bed of this truck allows for sleeping, food storage, power and gear storage, thanks to the versatility of the DeeZee products. So far, everything has shown itself to be functional and useful on its adventures. 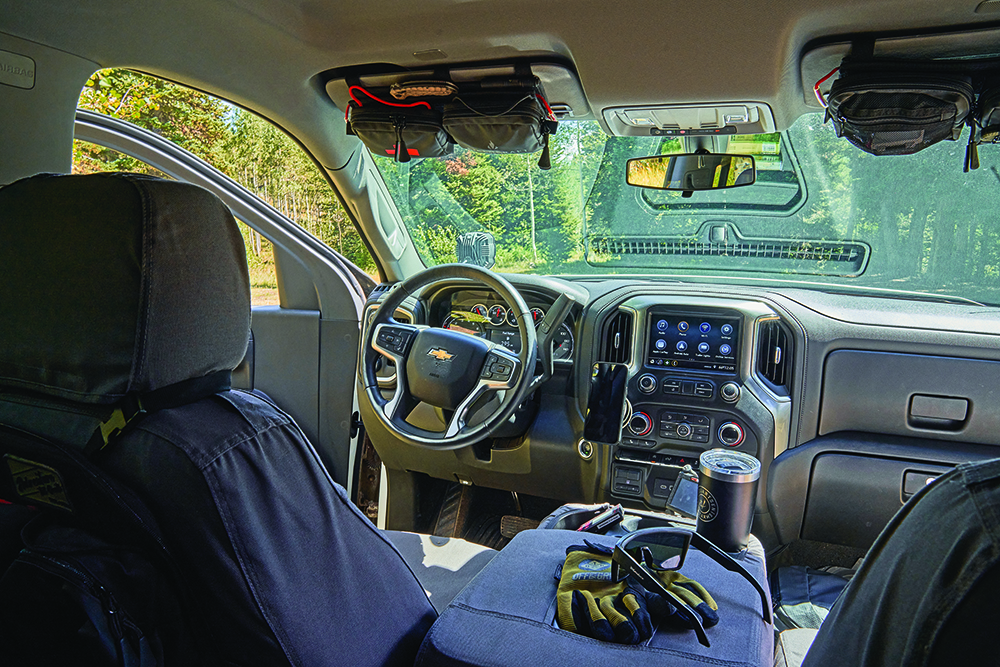 Since the DeeZee Silverado was built, it has proven itself a few times over already. It’s traveled through 25 states—from exploring the high-altitude peaks of the Colorado Rockies and chasing after hot springs to bombing the Southwest to go bass fishing out of kayaks. It has also toured all the backcountry roads in the Midwest. 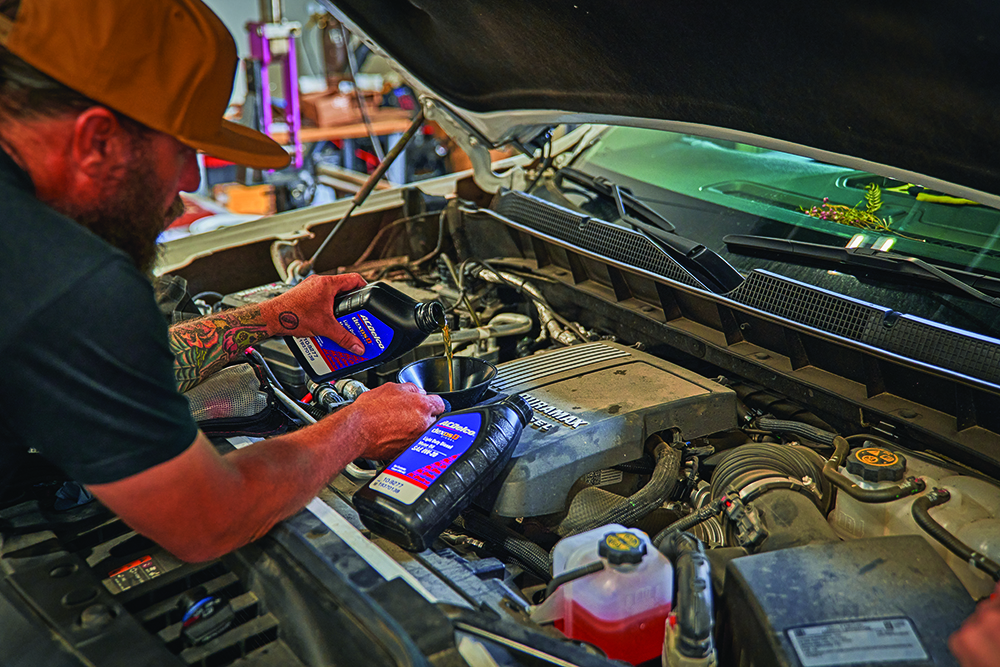 And, when Yeti gets home, it goes back to its daily duty as his work truck … that is, when it’s not flexing for DeeZee as a promo vehicle.

So far, this rig has already done multiple coast-to-coast trips. One of these comprised a 13-state, cross-country trip over four weeks that took them through Iowa, Missouri, Kansas, Oklahoma, Texas, New Mexico, Arizona, California, Nevada, Utah, Colorado, Wyoming and Nebraska.

The new, 3.0L turbo-charged Duramax, fondly called the “Baby D,” supplies huge amounts of torque out of a pretty small package. It keeps this half-ton sporty and nimble, both on and off road, all while keeping the MPGs reasonable. 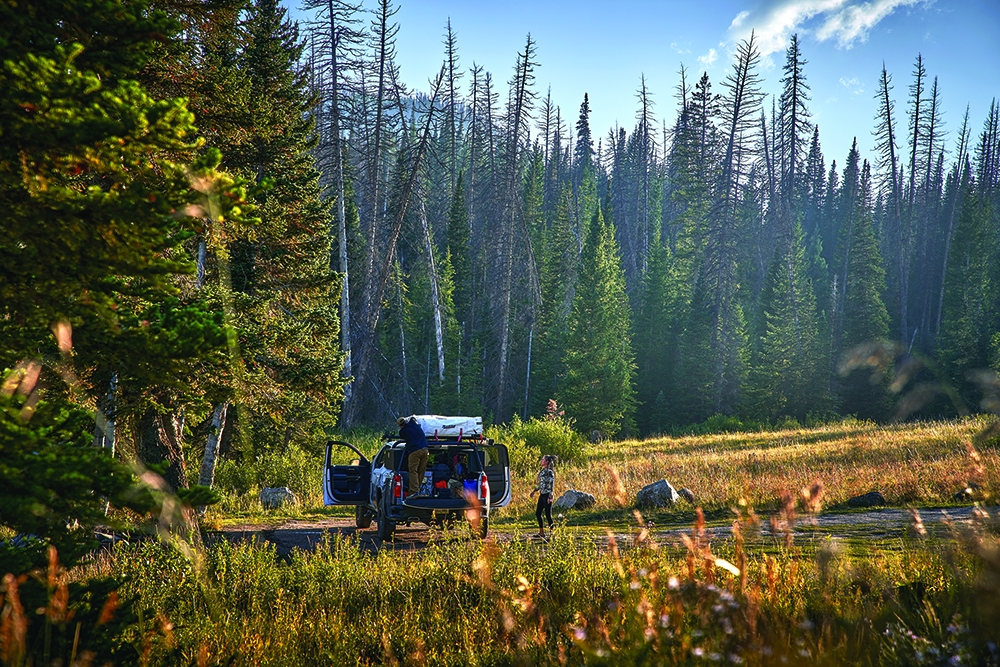 Yeti Norvell and Yeti pack up their DeeZee Silverado

This well-mannered road trip adventure rig, with its Covercraft/Carhart-trimmed interior, might be plush, comfortable and easy to drive, but that doesn’t mean Yeti goes easy on her. This particular Silverado is built for abuse. She’s wide—really wide. Thanks to the FiberWerx widebody kit and Icon Stage 4 extended-travel suspension setup, she performs. The included billet upper control arms and 2.5-inch shocks with remote reservoirs and adjustable CDCV coilovers perform well on all types of terrain. This long wheelbase rig really shines in the desert—in large part because of the extra-width, Yeti-fit Bronze 17×8.5 Icon Alloy Compression wheels wrapped in a set of Toyo 315/70/17 Open Country A/TIIIs. 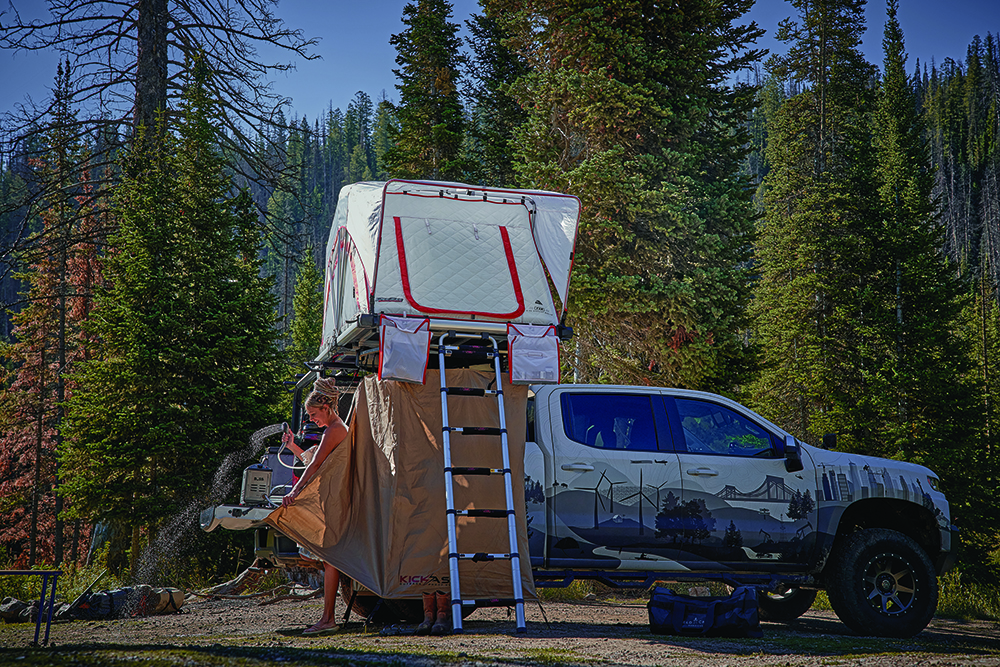 Yeti Norvell and his girlfriend Yeti shower next to the truck.

To light up the night, Yeti chose a bit of classic Americana in his full KC HiLites setup that uses the brand-new Flex Era 4s on the pillars. A set of Flex singles acts as his rear light setup for scene and work lights. An sPod controls it all. A WARN VR Series winch was included to get the truck out of sticky situations, just in case Yeti goes too hard. Plus, a DeeZee transfer tank was installed to make sure this baby diesel gets to the next gas station on its long hauls across the country.

What really sets the DeeZee Silverado apart, though, isn’t just its wide fenders, awesome stance and “sick wheels”; it’s the wrap. It’s a complex image of locations that span the entire country, depicting notable work locations, as well as adventure locations—all the way from New York City to the Pacific Northwest. The wrap is a true testament to Yeti’s love of his country. (Bonus: If you look really closely, you’ll see a bunch of Easter eggs hiding in the graphics too.)

At the end of the day, Yeti Norvell is just like you and me. He’s the guy who makes building incredible stuff a reality. He’s wildly talented; he’s a good man; and he’s humble.

He builds some of the coolest rigs and inspires all of us to build big and dream bigger while he and Yolo travel the country, searching for more epic adventures. Yeti is an example of a good human and a great American. If we had more people such as Yeti, our world would be a better place.

“The new, 3.0L turbo-charged Duramax, fondly called the “Baby D,” supplies huge amounts of torque out of a pretty small package. It keeps this half-ton sporty and nimble, both on and off road, all while keeping the MPGs reasonable.” Ready for the next project or adventure, Yeti and Yolo keep life both fulfilling and exciting.

The future is bright for him as his build list grows. We can’t wait to see what’s next or where his talents take him. We love watching his and Yolo’s adventures and will continue to follow them through their journey in the off-road automotive space.

He calls himself the “Blue-Collar Adventurist,” but many of us call him “friend.”

If you haven’t done so already, look up Yeti and Yolo online @amancalledyeti and @thewildyolo. Check out all the amazing projects they’ve built. And, if you ever have the opportunity to meet them, make an effort to do so. You won’t be disappointed.