→ Submit your rig and win a Tread magazine feature of your truck! ←
Get the Magazine
Features
Text and Photos by Bryon Dorr 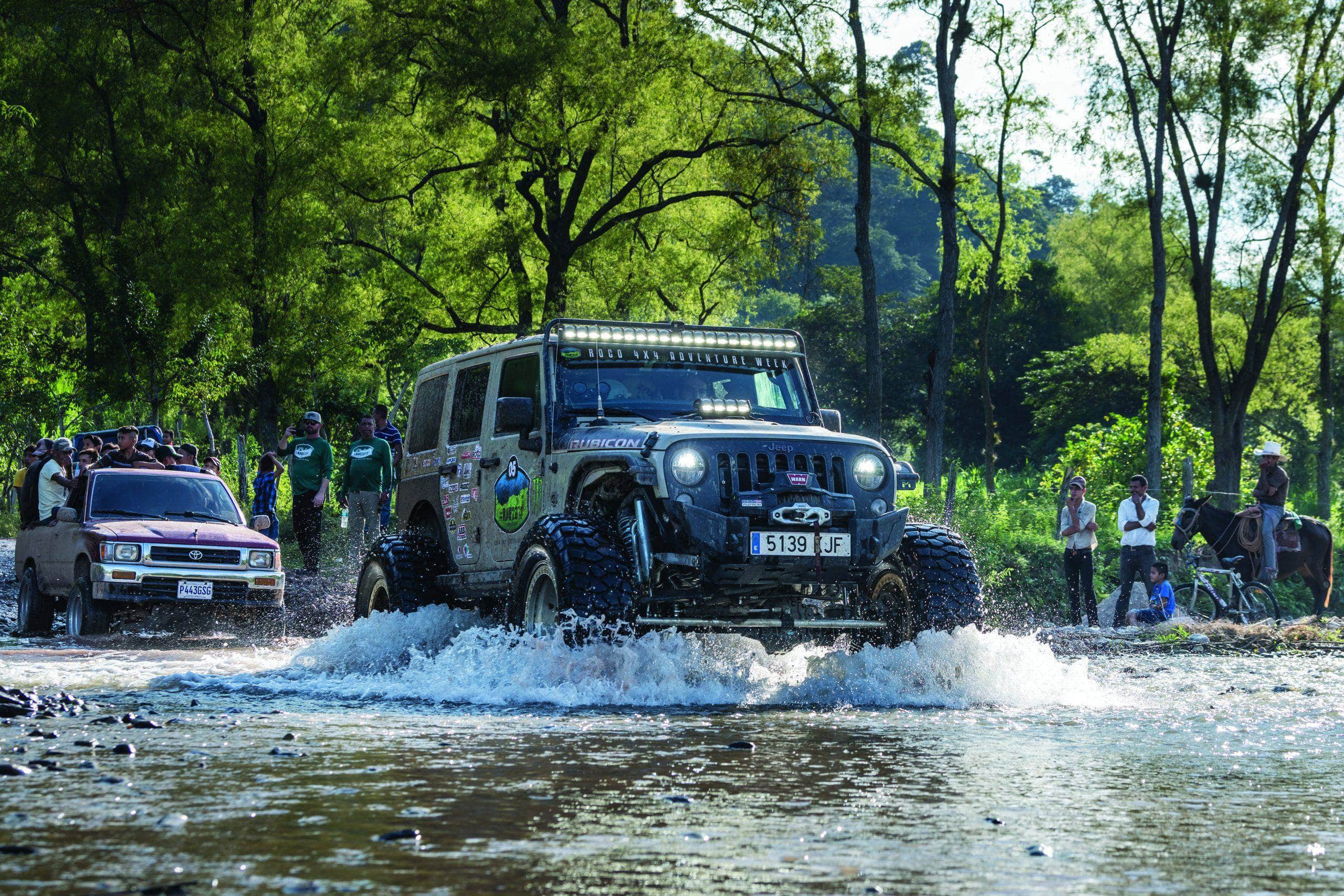 What do you do when you roll over your custom Jeep in an off-road competition in Spain and total it? Even worse, you’re planning to ship the Jeep overseas for another big adventure only three weeks later. If you’re Jose Gayoso, the owner of Roco 4×4 Spain, you go to your local dealer and buy a brand-new 2018 Jeep JKU Rubicon Recon. Three days later you stuff it into a shipping container headed for Miami—for the ultimate makeover.

This Jeep is quite possibly the ultimate JKU. It has very little stock Jeep left from the factory, as everything has or will be upgraded. It was built in just two short weeks, and completed just a few hours before being stuffed into yet another container, this time headed for Honduras.

Gayoso managed to roll over his custom 2017 JKU Rubicon Recon during the 2018 Open Iberico de Navegacion-Roco 4×4 off-road race. The Jeep understeered more than expected on one of the sharp turns on the course, which sucked the driver-side front tire into a ditch. The Jeep smashed into the nearby cliff and the frame was so bent it was deemed a total loss.

Roco 4×4’s world headquarters in Miami, Florida, is where Gayoso shipped the stock replacement Jeep. He flew to Miami once the Jeep landed and got to work on it with the rest of the team at Roco 4×4. In two short weeks, they were able to change it from a stock Rubicon Recon into this insane off-road Jeep monster. The time frame was so tight because the build needed to be ready for the Roco 4×4 Adventure Week in Honduras.

The first order of business was getting this Jeep rolling right. The Jeep was fitted with massive 42-inch BFGoodrich Red Label Krawler sticky tires, but that required some serious work. Those big tires would be wrapped around Raceline forged double beadlock 20×10 wheels, for the ultimate low-pressure off-road performance.

Fox 2.5-inch coilovers are fitted at all four corners, along with triple bypass 3-inch custom valved Fox shocks at each corner, as well.  This setup allows for a whopping 14 inches of rear wheel travel and 12 inches of front wheel travel. The remote reservoirs for the rear shocks are even tucked up into a cavity built into the trunk of the Jeep, in order to allow full rear axle articulation and travel. The suspension is completed with a full BDS Long Arm Kit and Currie Anti-Rock Swaybars.

“This Jeep is quite possibly the ultimate JKU. It has very little stock Jeep left from the factory, as everything has or will be upgraded.”

To handle the massive wheels and tires, and the off-road obstacles this Jeep is built to tackle, Ultimate Dana 60 axles where installed at both ends. The axles have 5.38 gears, in order for the Jeep to work well both on an off road. The axles also came with an upgraded big brake kit, an important upgrade in order to stop those massive tires and the fully built Jeep.

In order to make turning possible in tough off-road situations with those massive tires, a full steering system overhaul was performed. A Redneck Ram Assist Kit, along with RPMFAB aluminum steering tie rod and Currie heavy-duty draglink make the system work efficiently in any scenario.

Not much had to be done under the hood— except the install of a massive supercharger. A Sprintex Stage 2 supercharger was fitted, putting out around 440 hp. That is plenty of go juice to roll this big-tire, heavily armored beast. An Optima battery and a drop-in K&N air filter were also fitted underhood. A MangaFlow Rock Crawler series after-cat exhaust was also installed to allow the engine to breathe easy.

Of course with those massive tires and big suspension come some serious modifications to the body of the Jeep, so the suspension can work properly without tire rubbing. After a bunch of trimming, low-profile Metalcloak Overline steel tube fenders were fitted.

Custom Proline Bumpers were installed at both ends of the Jeep. They provide impact protection, solid recovery points, and improved entry and exit angles. The front bumper also provides a solid mount for the Warn Zeon Platinum 12-S winch. Both for body protection and easy entry, Rockslide Power rock sliders were used. A rear door mounted Poison Spyder tire carrier was fitted, but even that had to be modified to allow it to carry a 42-inch spare tire.

Lighting is fully upgraded with LED Rigid headlights and some serious off-road driving lights. A massive 50-inch Rigid Adapt LED light bar is mounted above the windscreen on a custom bracket. A Rigid 10-inch Adapt LED light bar is mounted on the hood using a Rigid bracket. The Adapt lighting can not only project a ton of light for nighttime off-road missions, but can change to a wide variety of colors for those times when you just want to impress your friends or get a cool photo.

While the inside of a top spec Rubicon Recon edition JKU is already super nice, the team at Roco 4×4 had to take it to the next level. The first thing you’ll probably notice is the thumping Alpine audio system. It features massive speakers and the Alpine Restyle infotainment head unit system that dominates the center of the dash. There is even a massive Alpine cooler in the back with built-in speakers, which is mounted on a custom slide-out system.

This Jeep is made to be used on truly tough terrain, so an upgraded rollcage system is a necessity. Because of regulation in Spain, the rollcage had to be removable with just a few bolts. Because of this, a Poison Spyder Sport Cage was installed.

To finish off the interior an sPOD was installed to control all the aftermarket lighting. A 60-watt waterproof Rugged Radio system keeps communication open on the trail. A GEN3 Carbon Lorance GPS system is mounted by heavy-duty RAM mount suction cups on the passenger side of the Jeep for off-road navigation.

The Jeep build was buttoned up just in time to catch a container ship to Honduras for RAW 2018. A 10-day extreme overland adventure ensued all across Honduras. Everything from big boulders, to deep mud and long highway miles were part of the adventure. The Jeep needed some tuning and adjusting along the way, but never let Gayoso down. Is there a more appropriate shakedown trip for this ultimate JKU build? (Be sure to take a look back at the March/April 2019 issue of Tread Magazine for the full story on RAW 2018.)

This impressive JKU is already adventure proven and built to the nines, but there is always more that can be done. Roco 4×4 already has plans to upgrade the transfer case to an Atlas four-speed unit. To really take this build into the stratosphere a Hellcat engine swap is also in the works.

“The Jeep build was buttoned up just in time to catch a container ship to Honduras for RAW 2018. A 10-day extreme overland adventure ensued all across Honduras.”

While this beastly Jeep has spent most of its life in the USA so far, it will soon be shipped back to Spain. It will be the showpiece for the Roco 4×4 Spain shop and be on dispaly at a local car museum. It’s had a short, full life already; however, with RAW 2018, Jeep Beach 2019, and off roading in the Ocala National Forrest, where will Gayoso take this monster next?