→ Submit your rig and win a Tread magazine feature of your truck! ←
Get the Magazine
Features, Trucks, Vehicles
Story by Mercedes Lilienthal
Photos by Curtis Reesor

Yearning for the Great Outdoors in Reesor’s Tacoma 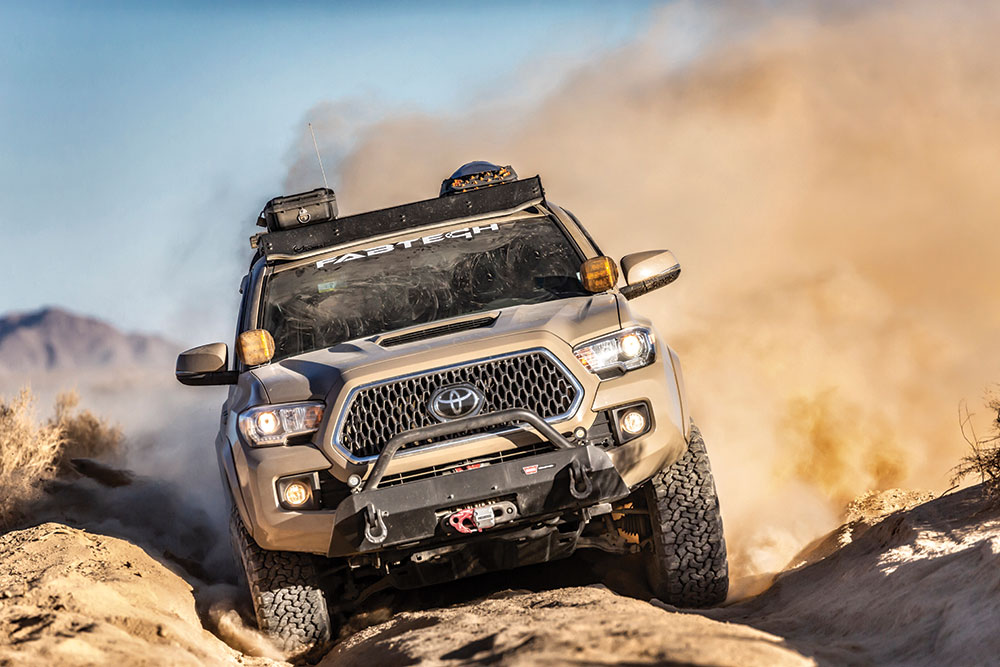 Curt Reesor yearns for the great outdoors; he loves exploring remote backcountry with his family. They camp near breathtaking landscapes and enjoy the life of solitude together. “For me, the Toyota Tacoma is the classic overland rig,” Reesor stated. “It’s reliable and capable, both on and off the pavement. I’ve spent most of my life living in California and Oregon, two states I know well and have enjoyed very much,” he said. “My Toyota is key to getting out beyond the crowds.”  This led them to purchase Reesor’s new 2019 double cab Toyota Tacoma TRD Sport. He promptly hooked up the couple’s Wisconsin-made XVENTURE XV-3 off-road trailer and traveled from Oregon to Anza-Borrego, a stunning area approximately 20 miles from the Mexican border. There, they celebrated by exploring Mother Nature, detaching from everyday duties.

The Reesors camp near breathtaking landscapes and enjoy the life of solitude together.

Returning to Your Roots 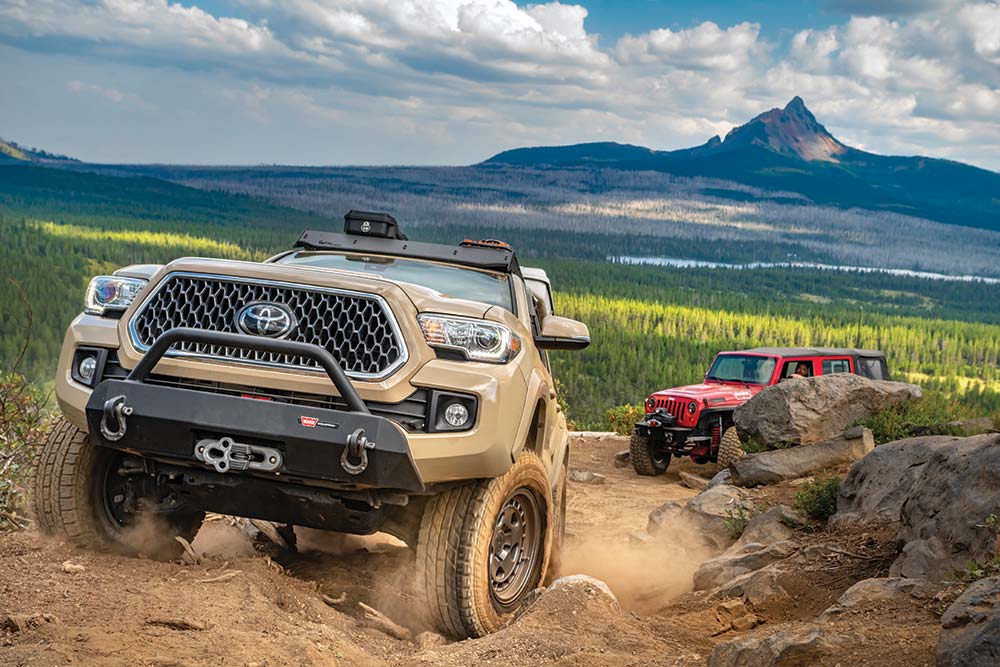 This TRD Sport isn’t an overbuilt wheeler, rather it was outfitted enough to get Reesor to the places he wants to visit.

Although Curt Reesor owned other 4x4s, he always appreciated Toyotas. His first new truck was a 1988 Toyota single cab 4×4 boasting a 22RE four-cylinder engine and manual transmission. His Toyota was bombproof, giving Reesor years of reliable service, including thousands of miles off the beaten path. To him, that truck was built to last. He kept his storied ’88 for several years until they had a child, suddenly they didn’t have enough room. Sadly, they had to let it go. Departing from his Toyota, Reesor deviated from the brand and owned two Jeep Wrangler TJs, a Ford F-150, and a Ram truck. However, the memories of his ’88 Toyota brought him back to the brand.

Reesor and his wife Erika frequently visited the Colorado and Mojave deserts and places along the Eastern Sierras. They even took his beloved Toyota on their honeymoon via dirt roads spanning the entire state of Oregon, from the California border to the Columbia River.

…Reesor knew they’d have adequate storage and off-pavement capability with their new setup, coupled with their XVENTURE trailer.

Reesor purchased his 2019 Tacoma for the extra space it offered. With it, he can easily carry cargo and extra passengers. However, Reesor opted for a short bed instead of the longer version. He didn’t want a “land yacht.” The Reesors purchased the TRD Sport versus the TRD Pro Series Tacoma, as they didn’t plan to visit places where a rear locker was needed. The couple compromised, knowing they’d have adequate storage and off-pavement capability with their new setup, mated to an XVENTURE trailer. “My vehicle is a backcountry camping machine. Besides that, it’s my daily driver,” Reesor explained.

‘My vehicle is a backcountry camping machine. Besides that, it’s my daily driver,’ Reesor explained. 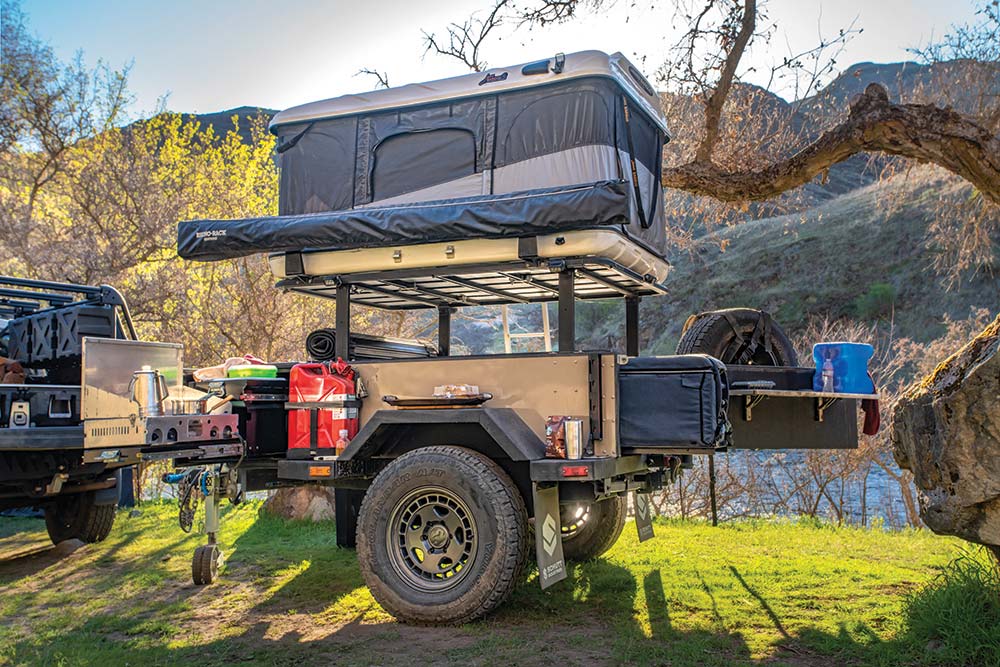 Reesor’s home away from home is this outfitted XVENTURE XV-3 trailer. It’s complete with everything he and his wife need for camp, including the James Baroud rooftop tent.

The customization of the Tacoma and XVENTURE trailer were strategic. For the rig to travel thousands of dirt-filled and tarmac-topped miles, it can’t just be a rock crawler. While capable in stock fashion, it’s ready for when the trails got more difficult and to store more stuff. 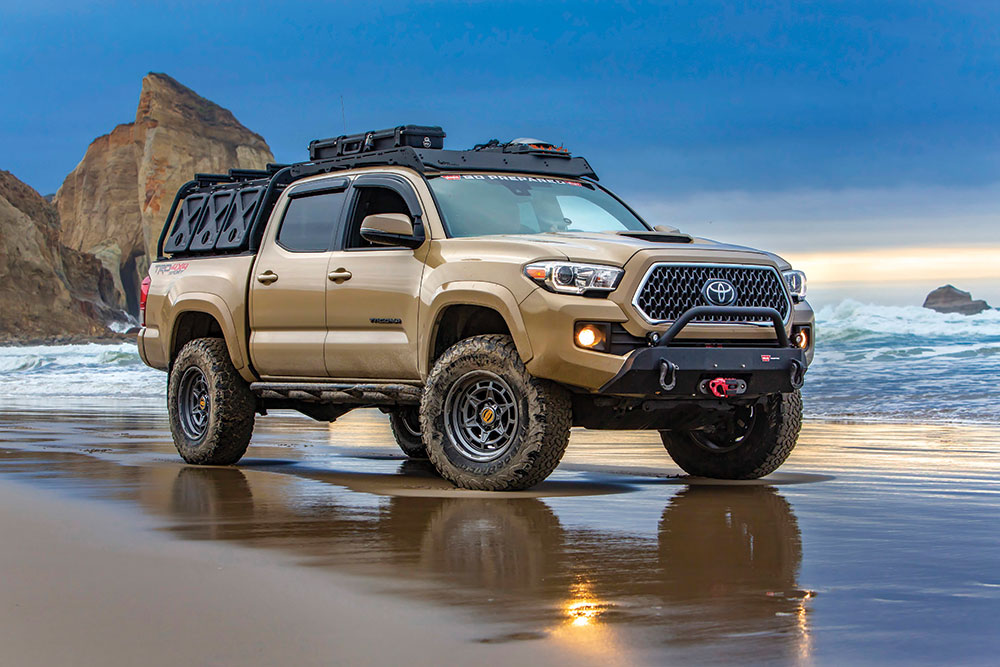 “I’m drawn to blank places on the map with bad roads,” Reesor said, “places that most people have not even heard of, which are becoming harder to find.” His current favorite? The three corners region of Oregon, Idaho, and Nevada. 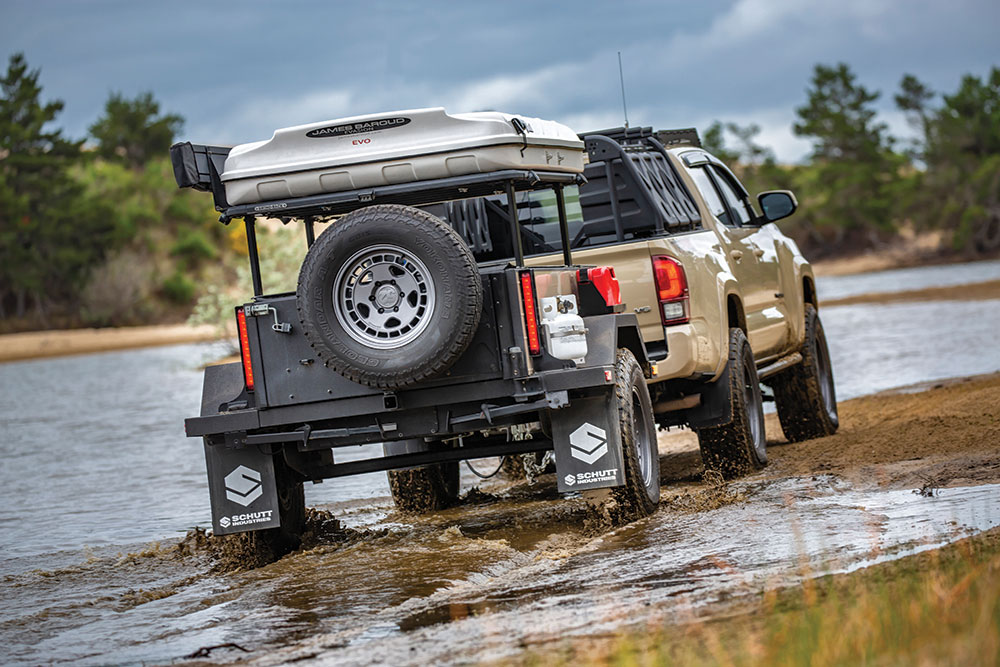 The American-made XVENTURE XV-3 trailer has a matching wheel and tire setup that allows for plenty of capability but doesn’t require carrying a dedicated trailer-specific spare. “The Fabtech kit feels rock solid on and off the road, giving me extra confidence that it’ll hold up to extended beatings the truck may take,” Reesor explained, “when heavily loaded on long backcountry journeys.”

There are times when Reesor travels to remote locations without a companion vehicle or a cell signal. He needed the extra confidence of a winch to get them out of potential trouble. He incorporated a WARN ZEON Platinum 10-S winch, mounted within a WARN Semi-Hidden winch bumper, creating a low-profile look. It respects the Tacoma’s front-end design. Reesor didn’t build this 2019 Tacoma to be a hardcore wheeler, but the vehicle has enough capability to get to many remote places.

“The winch is mounted out of sight, behind the bumper,” Reesor stated. “It fits perfectly within the generous open space of the Tacoma’s lower front end.” To minimize weight, Reesor opted for the ZEON Platinum with a lightweight synthetic rope. “I wanted the Platinum’s remote clutch, which makes it easy to engage and disengage the winch’s freespool clutch, even when the winch is completely tucked away behind the steel bumper,” he said. The factory supplied WARN winch hook got an upgrade to the Factor 55 UltraHook. With this change, Reesor added a great dal of confidence of the company’s closed loop system. 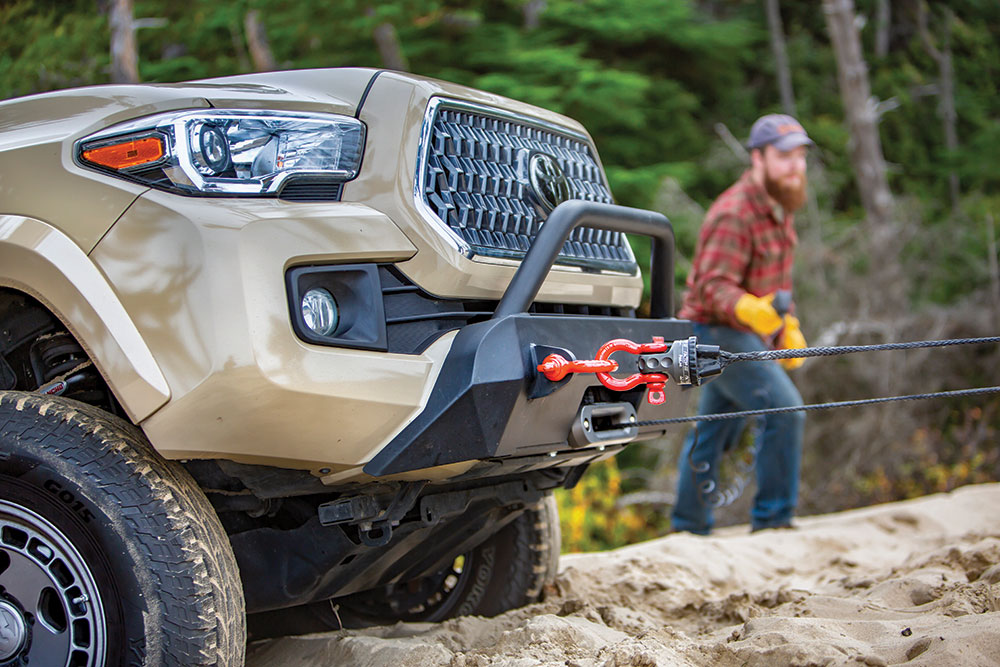 The combination of a WARN winch and bumper and Factor 55 rigging equipment makes this Tacoma ready for recovery. 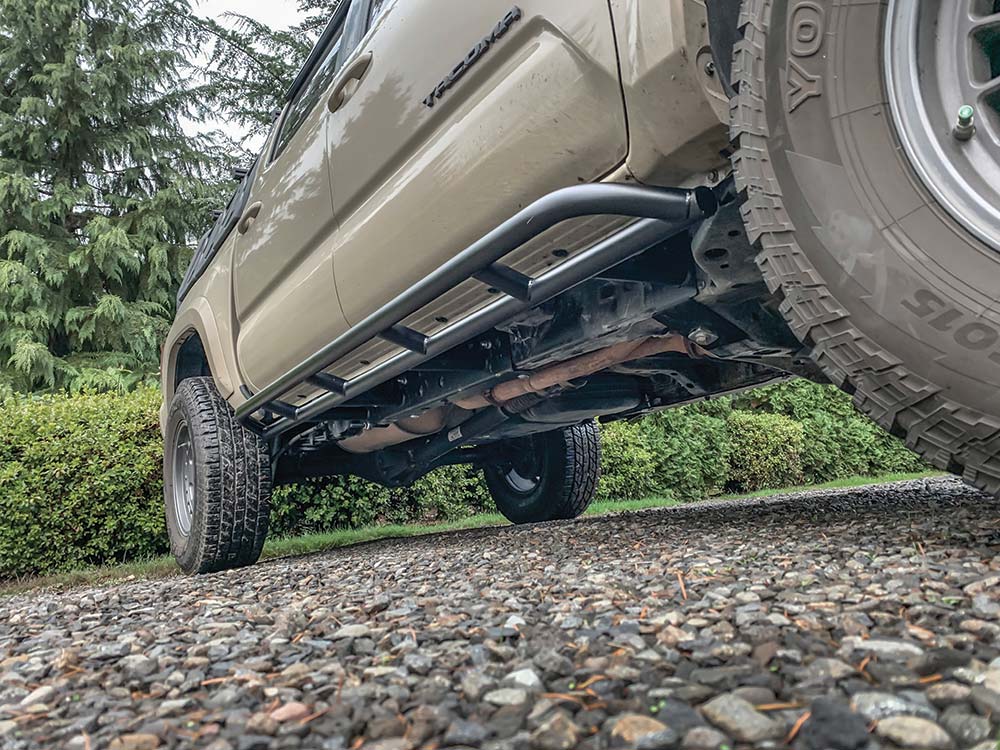 Rock sliders from CBI help to protect the Tacoma’s rocker panels from trail hazards such as stumps, boulders, and logs when venturing off the pavement. 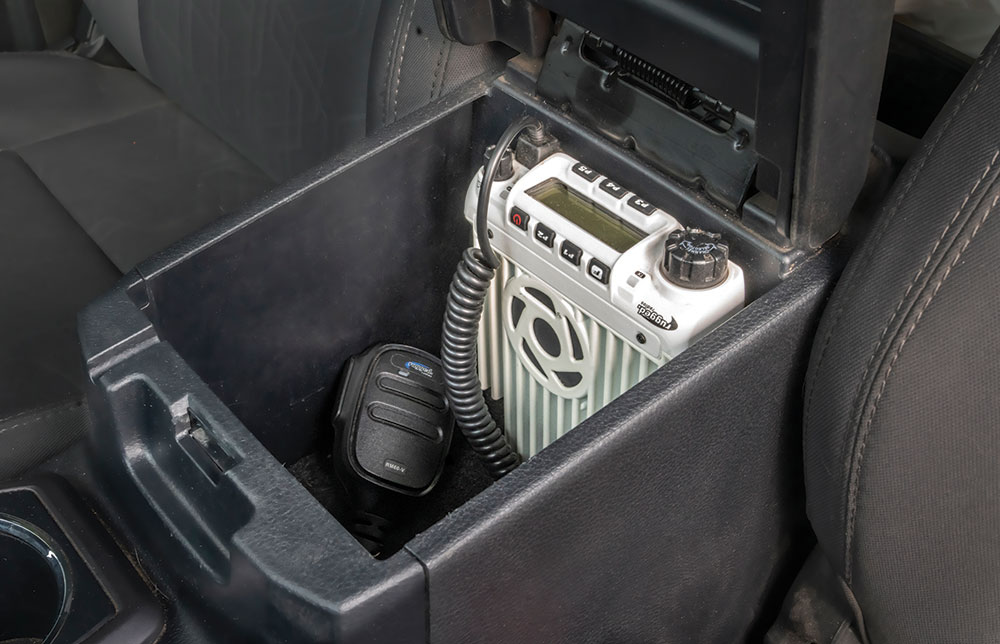 A Rugged Radio is secretly stashed in Reesor’s center console, and the magnetic roof antenna helps amplify the radio’s reach. A Prinsu Cab Rack is at the ready for any extra storage opportunities that may arise. One of Reesor’s most memorable experiences with his new Tacoma? Camping on the edge of a remote cliff overlooking a sweeping view of the Utah Canyonlands. “The drive in was an adventure; we had this world-class location to ourselves,” he said. “It was unbelievable. It would not be possible without a capable rig and some careful planning.” The Tacoma and XVENTURE trailer setup have been a great combination for Reesor and his wife to explore the western part of the U.S.

Along for the ride is their trusty sidekick, an XVENTURE XV-3 trailer. It’s an American-made, military-proven cargo hauler incorporating the couple’s kitchen, water and propane, additional cargo area, shade, and sleeping quarters. Its all-aluminum weldless Huck bolt chassis making it an ideal tow-behind companion. It surpasses the weld-together competition by decreasing chassis fatigue and vibrations.

For Reesor, the XV-3 tracks well behind his new 2019 Tacoma TRD Sport. It is gives them wonderful balance and is the perfect mate to their new adventure machine. Since their TRD Sport came tow-ready, fully wired with a hitch, they’ve increased their adventure potential. “The XV-3 gives us the ability to set up a multi-day base camp while keeping the tow rig free to explore the surrounding areas,” Reesor said. “We appreciate the XV-3’s smaller dimensions and extreme off-road capability. It’s light and easy to tow. It can go literally anywhere the Tacoma goes.”

Set up and breakdown is fast and easy. The couple enjoys the convenience of full-perimeter lighting, an electric ARB fridge, and on-demand hot water. Solar panels allow the couple to power accessories when parked for extended stays—perfect for solidifying Reesor’s outdoor adventures. The advantage of having a roof top tent on the trailer is that he can leave the trailer and tent setup at camp and take the Tacoma out to explore on its own.

Editor’s note: A version of this article previously appeared in the print issue of Yota Winter 2022.