→ Submit your rig and win a Tread magazine feature of your truck! ←
Get the Magazine
Hiking, Outdoor Adventures
Story and Photos by Ryan Lee Price Learning how to use a traditional compass and map to find your way is as paramount as knowing how to change a tire or liberate a stuck Jeep.

Described by one off-road enthusiast as being “in dreadful condition,” the Morrison Jeep Trail rises sharply up the precipices overlooking Clark’s Fork of the Yellowstone River north of Cody, Wyoming. Though not as treacherous as the Fordyce Creek Trail in Truckee, California, nor as technical as the famed Rubicon nearby, the Morrison Trail features 27 very tight switchbacks on the main ascent to the top of Beartooth Plateau. There are breathtaking views of Sugarloaf Mountain to the west, Bald Peak across the river to the east and White Mountain to the south.

What’s special about the Morrison Jeep Trail is that it has the distinction of not being on your rig’s navigation. In-car navigation systems are great as long as there are roads and cardinal directions to keep you pointed in the right way (and you have it updated regularly), but as soon as your wheels roll off the map, your navigation system is just a pretty green picture providing no help except to point north. But what if that stops working? What happens if your vehicle’s battery drains to zero or your phone goes dead? Or you don’t have cell service? You’ve got nothing left but good old map and compass navigation.

What Kind of Map and Compass Navigation?

There are road maps, resource maps, physical maps, and political maps, but the kind you always what to carry with you are topographical maps. John Wesley Powell, the director of the United States Geological Survey (USGS) from 1881 to 1894 once remarked: “A government cannot do any scientific work of more value to the people at large than by causing the construction of proper topographical maps of the country.”

There are a few websites that will sell map and compass navigators a topo map of any area in the country and even Google offers its cartography services that you could print out. However, the best, most accurate and most widely used are the topographical maps provided by the USGS, a program started in 1884 and updated regularly by the government. The first thing necessary is to familiarize yourself with the scale of the map. Though most quadrangle maps made after World War II are 7.5-minute in size and at a scale of 1:24,000—meaning that one inch on the map equals 24,000 inches of real-world land—there might still be some out there in a different scale.

Called a quadrangle, these topographical maps are drawn to 1:24,000-scale and contain 7.5 minutes of latitude and longitude (1/32nd of one degree), where one inch equals 24,000 inches of real-world land. It wasn’t until 1991 that the USGS completed mapping the entire lower 48 states in this scale. The coverage includes an impressive 55,000 7.5-minute quadrangle maps. The map’s real qualities lie in its colors, lines, and details.

The USGS included on its topographical maps almost 200 different features separated into five color groups. Cultural features, smaller roads, buildings, and man-made things such as trails are printed in black; main roads and political boundaries are in magenta/red; woodland areas and other vegetation are green; rivers, lakes, glaciers, and water features are blue; and contours lines, depressions, and mountain features are printed brown. If you see purple, that means it is an update from a previous version (though it’s a color no longer used by the USGS).

The various colors make map and compass navigation, but there’s a skill required to see a topographical map as it was intended: real-world terrain. Once mastered, by merely looking at a topo map, you’ll visualize the terrain as if you were standing before it. It is a skill that takes some experience. 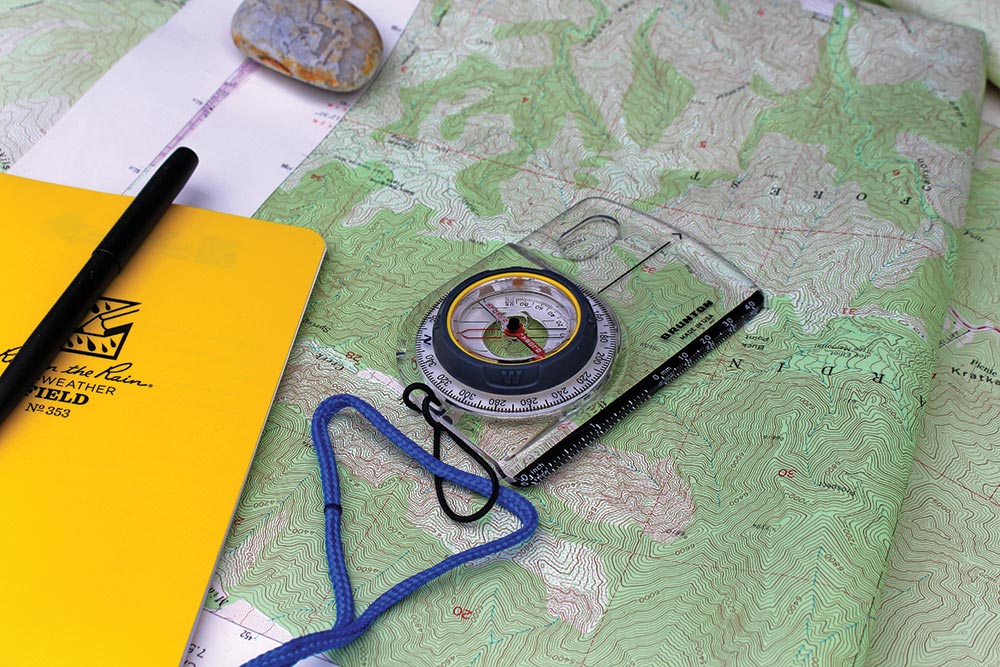 Reading and orienting a map is a very important skill to master for anyone who plans to spend any amount of time in the backcountry. By coordinating a compass with a map, you’ll be able to match the features of the map with features in the real world, allowing you the ability to navigate toward any destination on the map.

The closer the spacing of the contour lines, the more rapid the elevation change of the feature. This is important when traversing an unknown region, as a steep hill or deep gorge would have contour lines close together, while widely spaced contours indicate a gentle slope.

The compass always points north. The problem is that the compass doesn’t point directly to the North Pole. Instead, it always points to the magnetic north pole, which is currently somewhere in northeastern Canada. The map, however, points directly toward true north, and you need to know the difference in the real-world situation you’ve found yourself in.

It is common practice that all maps are oriented with true north at the top. At the bottom of the map, a symbol of arrows pointing to the geographic North Pole (shown by a star), magnetic north (MN) and grid north (GN). By coordinating a compass with a map, you’ll be able to match the features of the map with features in the real world, allowing you the ability to navigate toward any destination on the map. 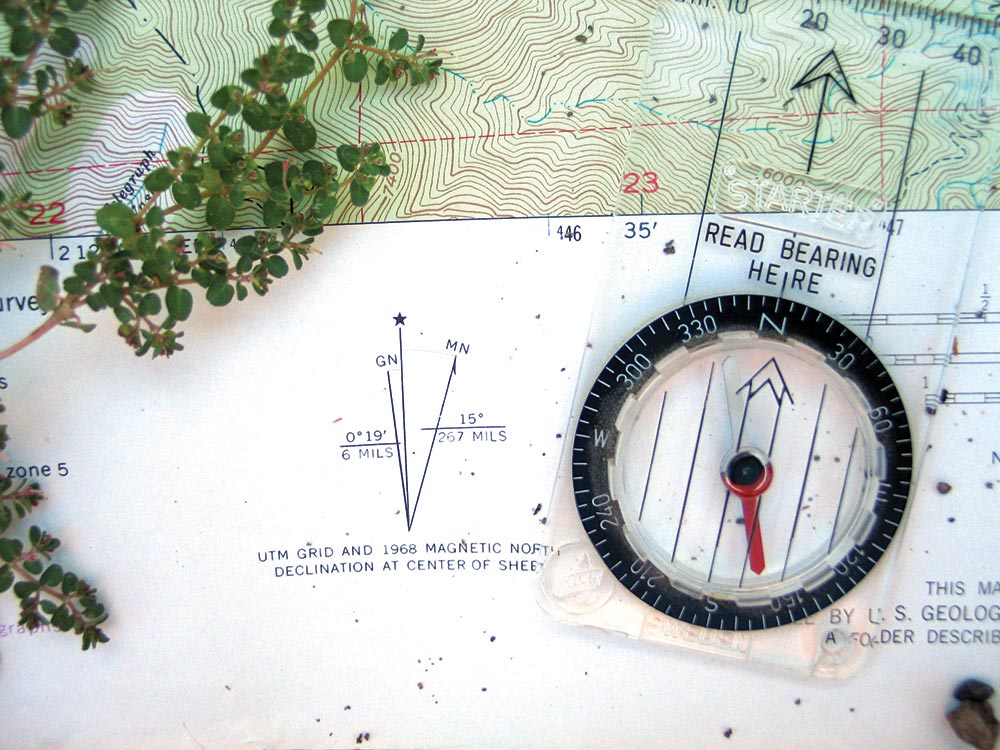 Basics of Map and Compass Navigation

To orient your map, place the compass on the map so it is parallel to the north-to-south border of the map, known as the “neat line.” 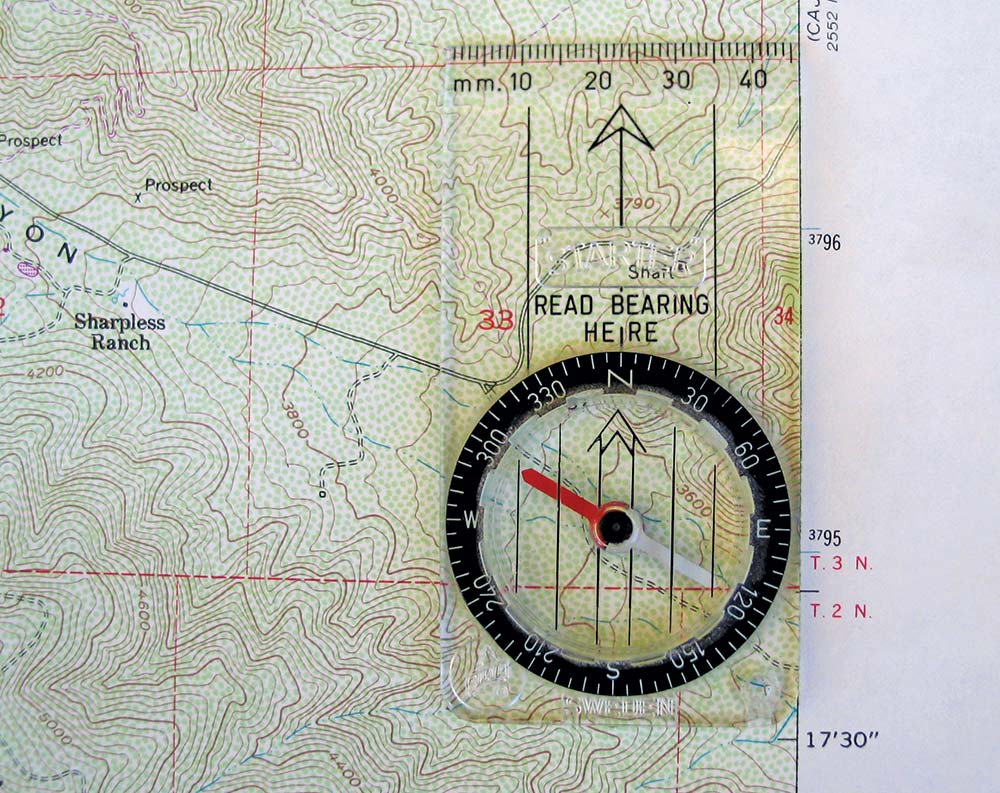 Holding the map and compass steadily together (the compass should still be on the north-to-south map “neat line”), rotate the map and compass at the same time until the red magnetic needle orienting arrow on the compass face line up. Your map and your compass are now oriented to true north. Look around and compare the physical features around you with your map; they should be an exact match. 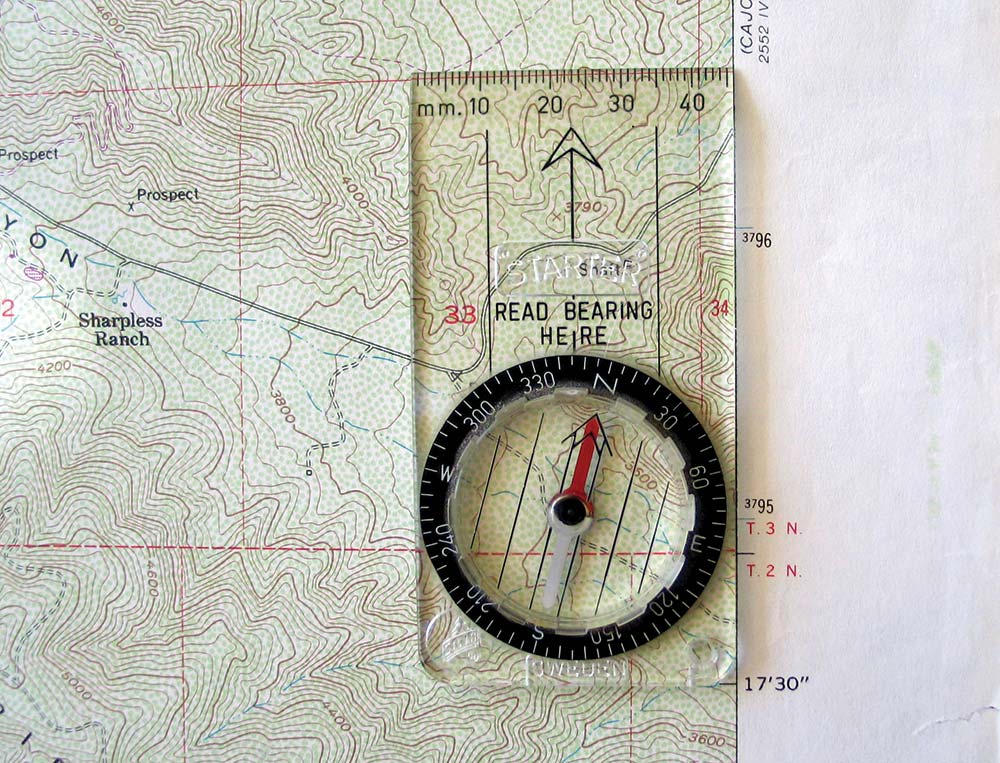 The most reliable backup for a navigation system is a quality paper map of the area and a traditional compass.

What if your compass breaks? You take a spill down a hill, and you lose it, or worse, it breaks on a rock. What then? How will you know where you are going or which way you need to go? You’ll have to orient your map based on what you can see, and this is easier if the area you are in has definite features like a tall mountain or a deep ravine. If you are in an area with little to no reference points, like on the plains, in sand dunes or in the rainforest, it will be considerably more difficult—but not impossible.

Hold the map in front of you and look around. Are there mountains? A cliff? A river? Can you find it on the map? If so, which direction is it in? Turn the map so it faces in that direction and then look for something else to cross-reference or a defining feature on the first object to further your orientation. Map and compass navigation is never an exact science, but at least it will help you head in the right direction.

The Features on a Topographical Map

The examples here are from the Waterman Mountain and Fontana quadrangles in Southern California, about 10 miles north of Pasadena in the Angeles National Forest and about 40 miles east of Los Angeles in the San Bernardino Mountains, respectively. The mountains north of Los Angeles offer a wide range of topography that well illustrates the various elements of a typical topographical map. This stuff is critical knowledge for all map and compass navigators. 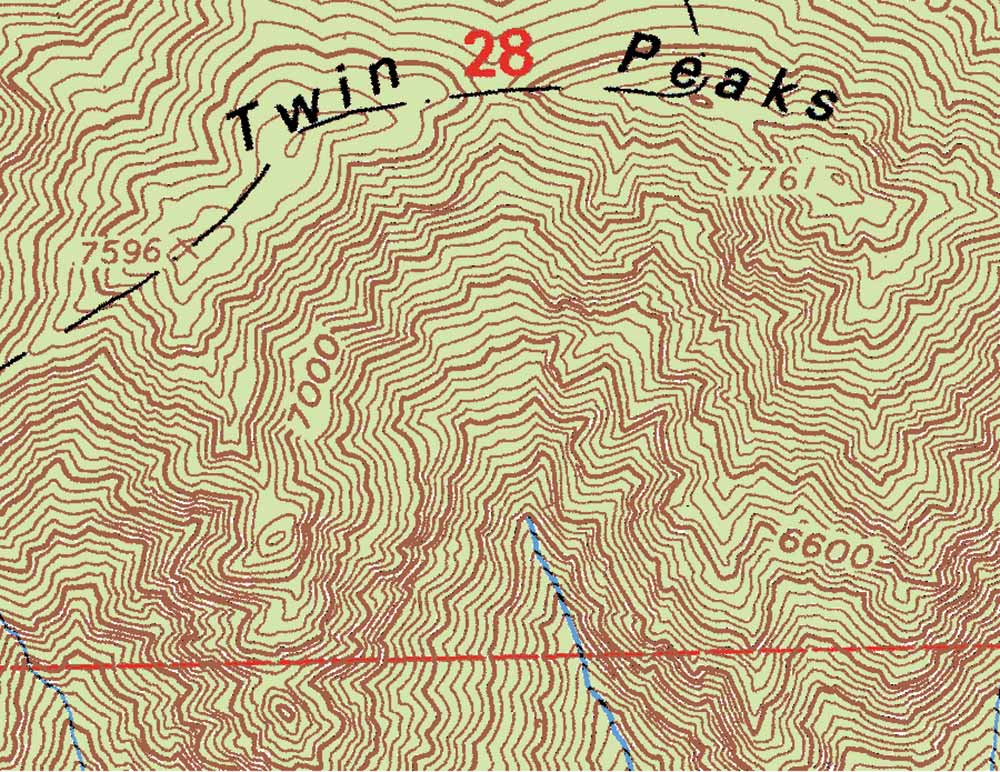 Just south of Twin Peaks is a narrow canyon, where the west fork of the Bear Creek originates. The contour lines here are close together, signifying steep terrain on both sides of the stream. Based on the 6,600 elevation, a good navigator can determine how deep the canyon is versus its the highest peak (7,761). Every index contour line represents 200 feet, so the stream is roughly 1,761 feet below the east Twin Peak. This would not be an easy climb. 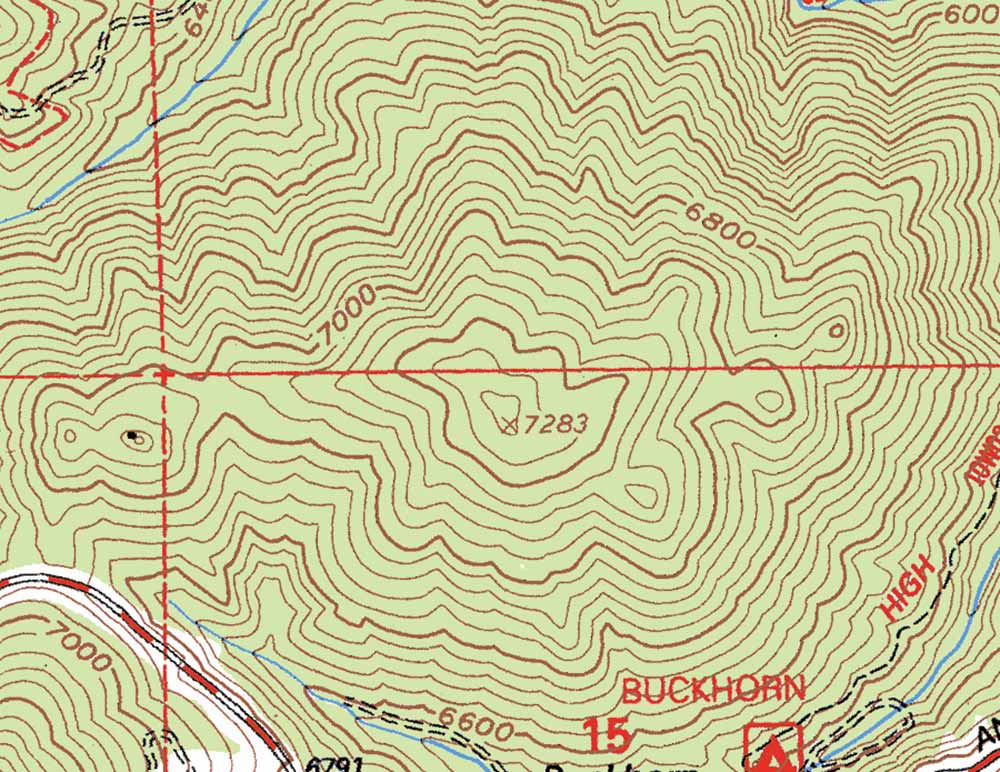 One of the highest points on the Waterman Mountain quadrangle map is this 7,283-foot peak, easily seen by the contour lines circling around each other. All the way around, the mountain has a steady rise and has the appearance of a rounded pyramid in shape with several sub-peaks on the southeast face. The red and white striped line in the lower left is Angeles Crest Highway. 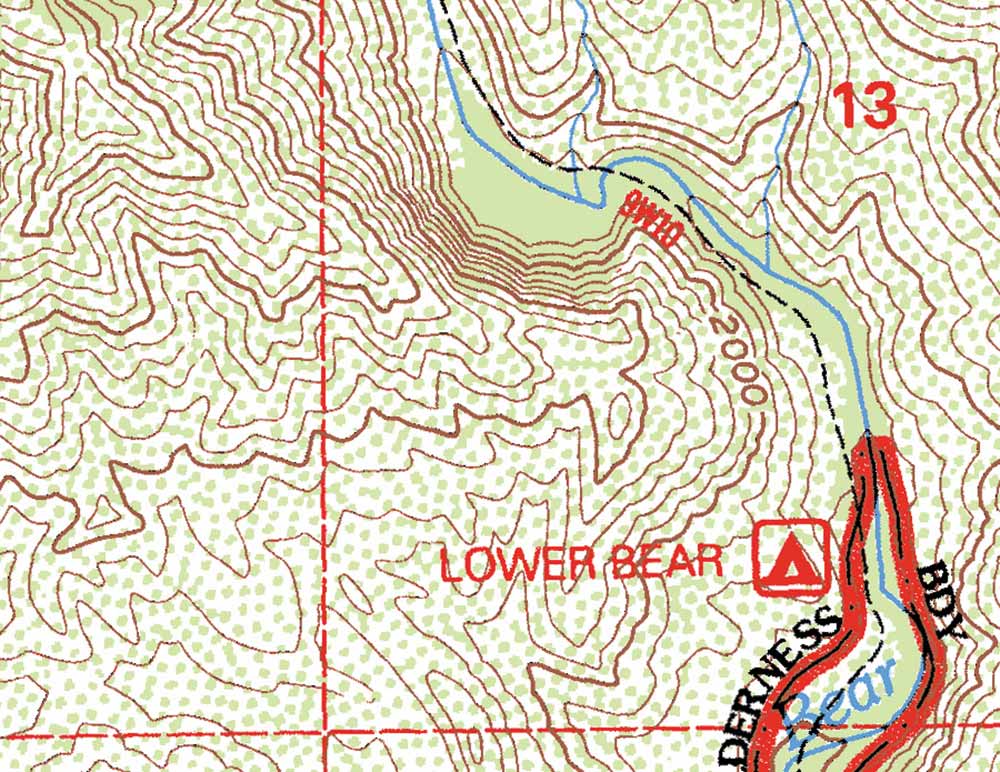 The campground to the west of Bear Creek is on a relatively gentle east-facing slope. If you were to leave Lower Bear Campground and head east, you would climb up to the crest of a 2,200-foot hill (with an elevation change of only 280 feet. Heading north will provide a wonderful view of a rock-littered river bed via a relatively steep precipice to the north. Because the contour lines are so far apart (in the center of this picture), that represents somewhat level ground. 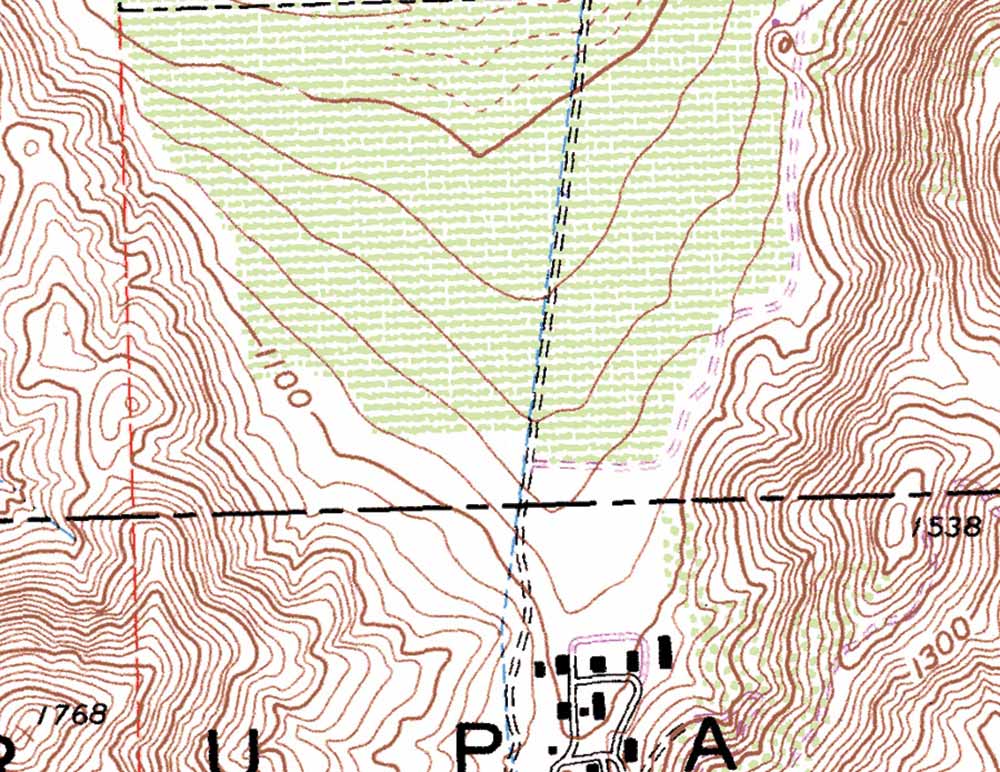 The widely spaced contour lines  show a typical alluvial plane gently descending north from steadily narrowing canyon. At the bottom, the map lists the interval at 20 feet. At the base of that canyon are several buildings in black. To the east, the walls of the canyon rise sharply, from 1,100 feet at the bottom of the natural amphitheater to 1,538 at its peak. The green shading shows that this flat canyon has a road (dotted line) following a natural steam (blue line) through the middle of it. 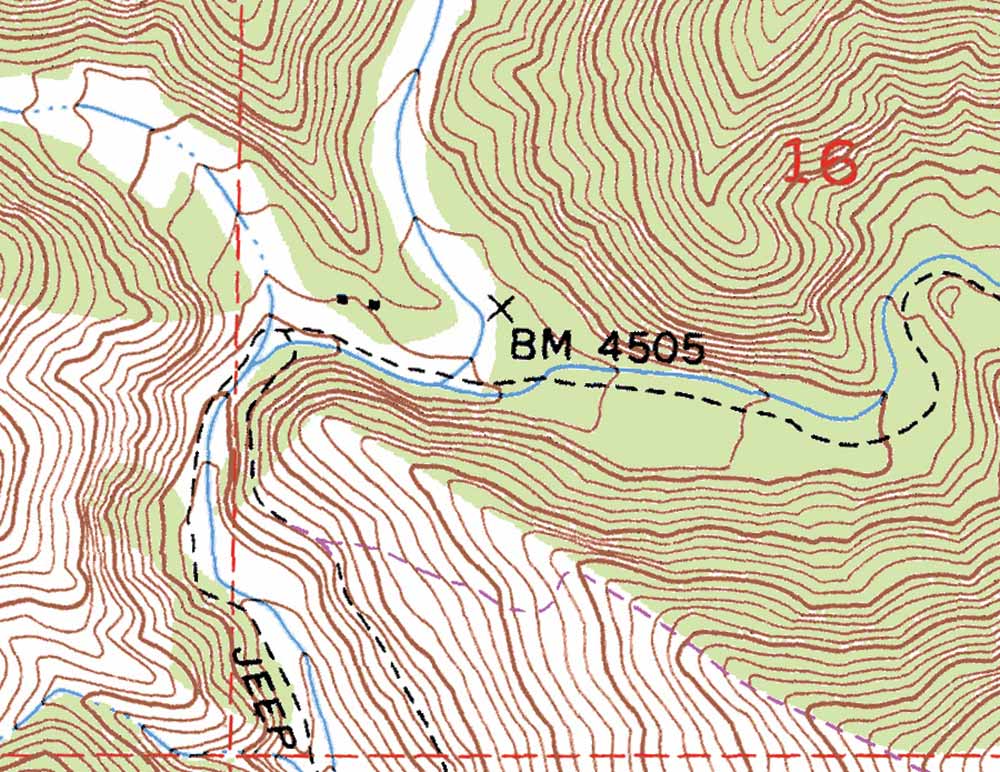 This is a particularly beautiful spot on the convergence of three canyons in the Mt. San Antonio quadrangle, Vincent Gulch from the north, Mine Gulch from the west and Prairie Fork in the east. A Jeep trail (dotted black line) runs through the canyon. The dotted blue line through Mine Gulch indicates a narrow wash, most likely dry, while the v-shapes of the contour lines in the various gulches point towards upstream. The “BM 4505” is a four-inch copper marker that the original surveyor of the area places in concrete.

Various symbols depict features such as building, campgrounds, springs, water tanks, mines, survey markers, and wells. Names of places and features generally appear in the color corresponding to the type of feature. Different colors and particular symbols more or less represent their parallels in nature. The difference between a sand beach and a gravel beach, for example, is the size of the dots representing the grains of sand.

Though there are around 200 symbols used on the 55,000 topographical maps currently in use by the USGS, these are a representation of the more popular symbols you’ll need for map and compass navigation. Editor’s note: A version of this story previously appeared in YOTA Winter 2022.