→ Submit your rig and win a Tread magazine feature of your truck! ←
Get the Magazine
Features, Jeeps, Vehicles
Written by Danny Korecki
Photos by Matt Girgis

This 2015 Jeep Wrangler Rubicon will get you your coffee—no matter where it needs to go.

The quest for perfection in the off-road world can be a long journey. Many off-road builds seem to have humble beginnings that spiral into rigs that give up daily driving duty and take on weekend trail duty. For Jim Hart of Ground Pounder Coffee, that’s exactly what happened to his 2015 Jeep Wrangler Rubicon.

The quest for perfection in the off-road world can be a long journey. Many off-road builds seem to have humble beginnings that spiral into rigs that give up daily driving duty and take on weekend trail duty. 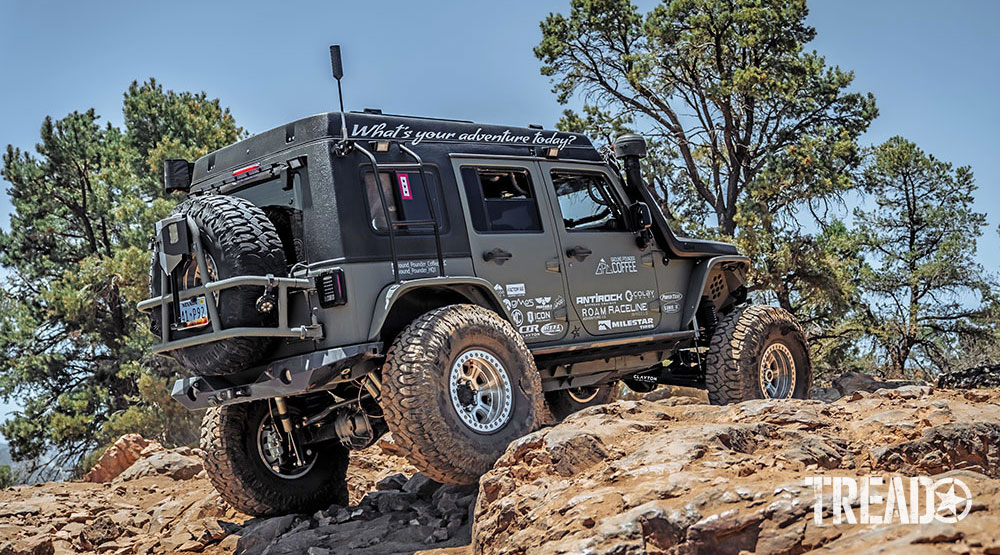 A pause at the top of a rocky uphill climb allows HQ1 to take a moment to shine.

Outside of maybe the first vehicle or two after getting his license, all of Hart’s vehicles have always been heavily modified. He believes it all started when he was off-roading with his dad in his modified 1970 Chevy Blazer.

‘It doesn’t matter if it’s a parking lot or the top of a mountain, people have to have their coffee, and this rig will bring it to them.’ 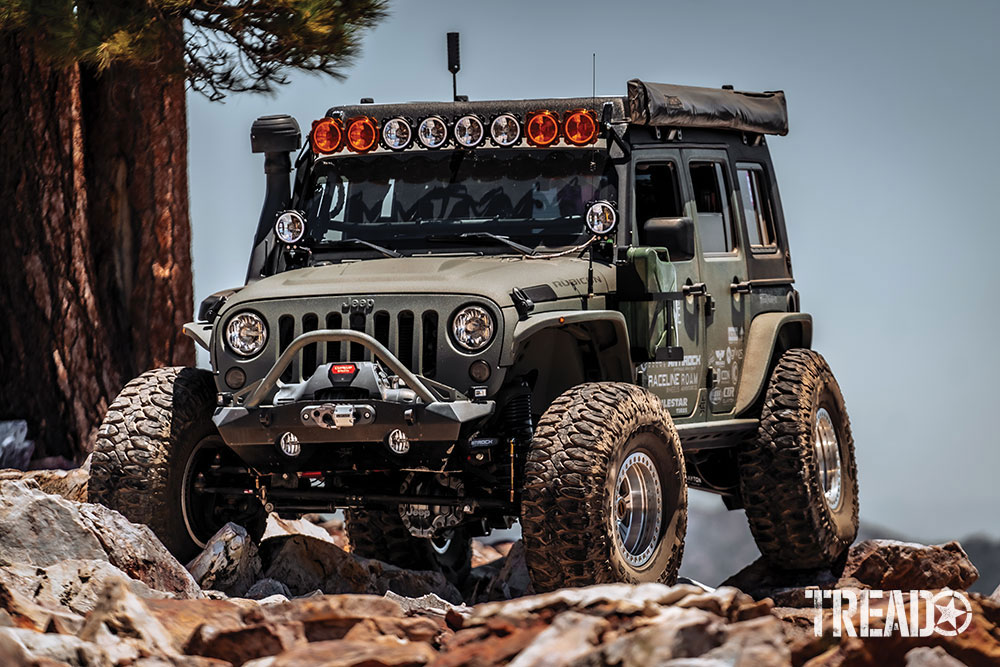 The suspension upgrades get HQ1 through the toughest of obstacles.

“I can remember off-roading with my dad and his friends as a child and loved it! I can remember him working on his rig while he had me holding the flashlight or handing him tools. I learned everything I know from my dad and thank him for instilling in me his attention to detail,” says Hart.

Hart got everything he learned from his dad. All the experience of modifying—knowing what would and wouldn’t work—was knowledge from his father that he took to his own build. 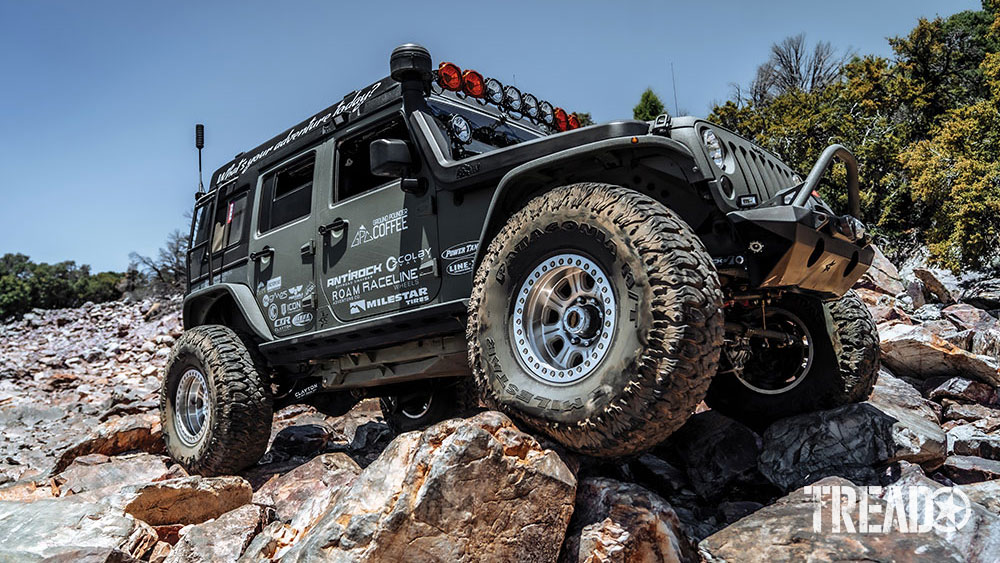 The two-valve system on HQ1 allows Hart to air down to less than 10 psi when needed.

Hart’s rig is a 2015 Jeep Wrangler Rubicon, which, in its current phase, he nicknamed “HQ1” for “Headquarters 1” for his business, Ground Pounder Coffee. HQ1 started its life as “BUGOUT6” with the purpose of being an overlanding vehicle, but Hart found himself getting into a bunch of situations that required the vehicle to have a bit more rock-crawling capabilities. He then shifted gears on the build and went toward more-rock-crawling mods. 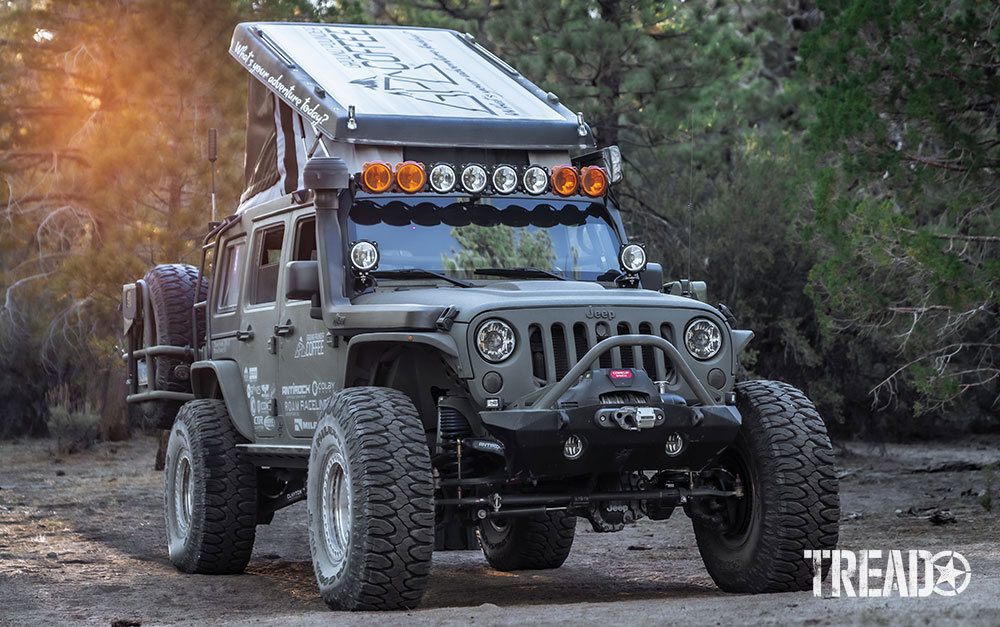 The Ursa Minor pop-up tent makes setting up camp a breeze, especially in the rain.

“The bug-out aspect has always been part of my thinking while building HQ1. Therefore, we have folding solar panels, water purification, a very comprehensive medical kit and several other survival related items inside HQ1,” says Hart.

The rig doesn’t just feature Hart’s Ground Pounder Coffee branding for fun. He uses it to transport coffee, no matter where an event is being held. As Hart would say, “It doesn’t matter if it’s a parking lot or the top of a mountain, people have to have their coffee, and this rig will bring it to them.” 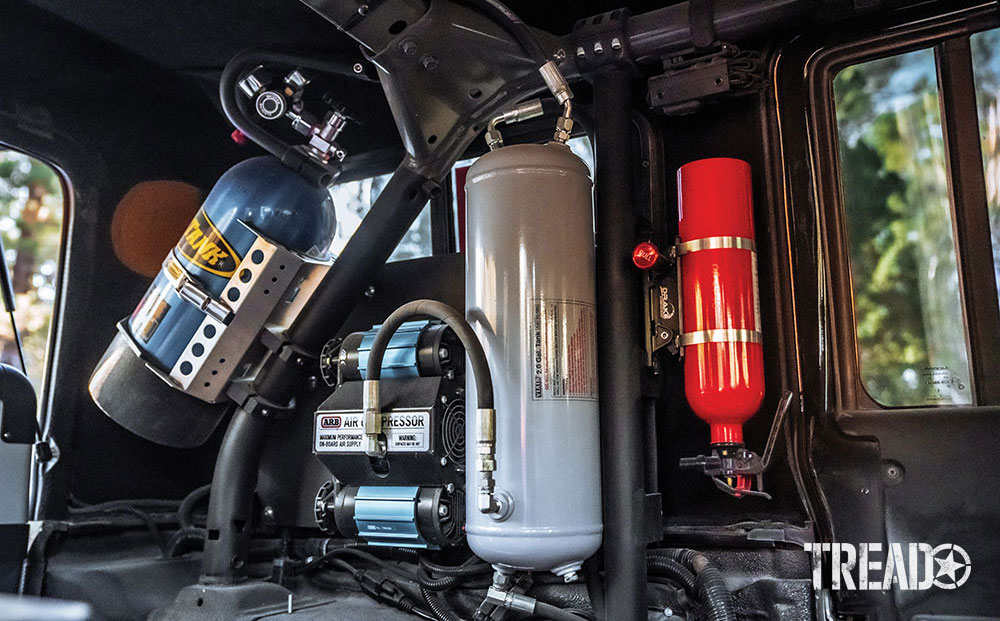 The custom mounts for the Power Tank, Viair air tank and ARB compressor are seen here near the custom D pillar.

He doesn’t trailer the rig to those locations either. It drives to every trail or any city for an event. The HQ1 Ground Pounder Jeep has been all throughout California, Arizona, Nevada, Colorado and, of course, through Baja, Mexico. Only using quality products on his rig now, Hart learned the value of a good investment. Learning through the process, Hart cycled through parts until he found those that work best to share his experiences with others. 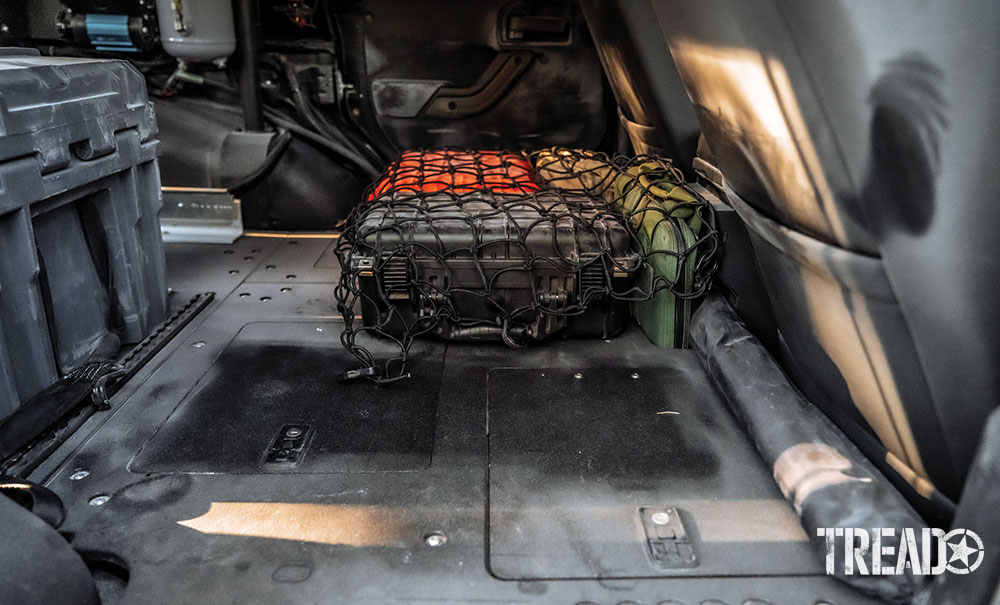 The Goose Gear seat delete provides a platform to easily pack gear for a long trip or store gear below in the compartments.

It took Hart a little more than four years to get the build to where it is now. He performed most of the work himself in his own driveway. Following his dad’s advice, he wouldn’t know or learn until he tried. And try he did, diving into the build full force. With a solid understanding of mechanics and tools to get the work completed, there wasn’t much holding Hart back. The major modification work would have Hart borrowing some space in his buddy, Andy’s, shop. Eventually, RockTech in La Habra, California, did the final look-over of the vehicle. 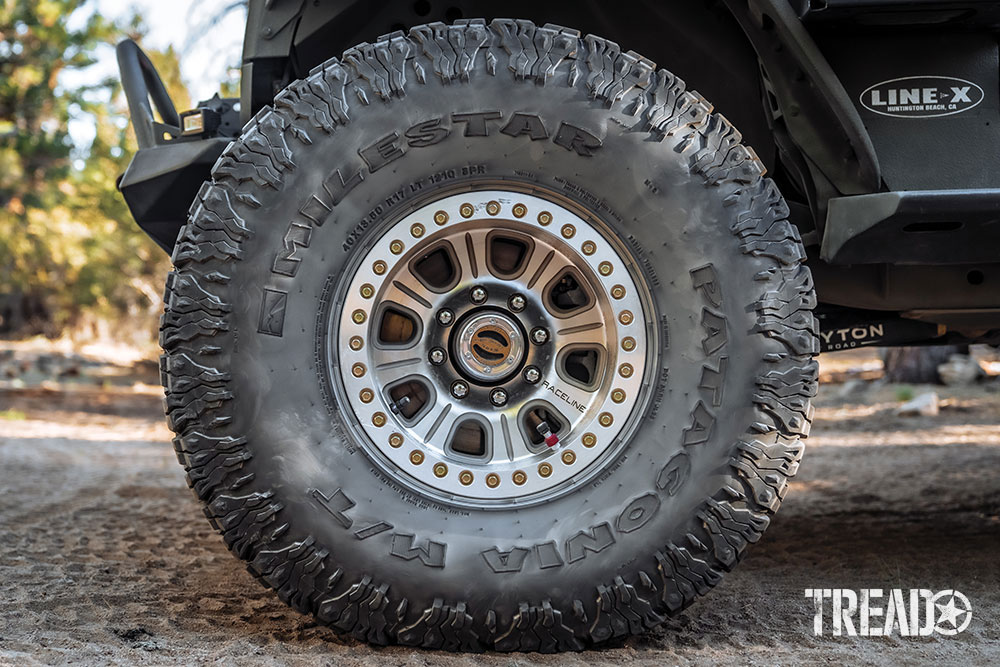 Telling you what it’s tackled and where it’s gone is one thing, but judging what it can handle is in the parts—and HQ1 has a serious parts list. A whole article could be dedicated to just reading the list.

It features Dana 60 front and rear axles that, along with the 17-inch Raceline RT233 Monster Beadlock wheels wrapped in 40-inch Milestar Patagonia M/T tires, allow the rig to carve and climb any terrain it may come across.

“Telling you what it’s tackled and where it’s gone is one thing, but judging what it can handle is in the parts—and HQ1 has a serious parts list.” 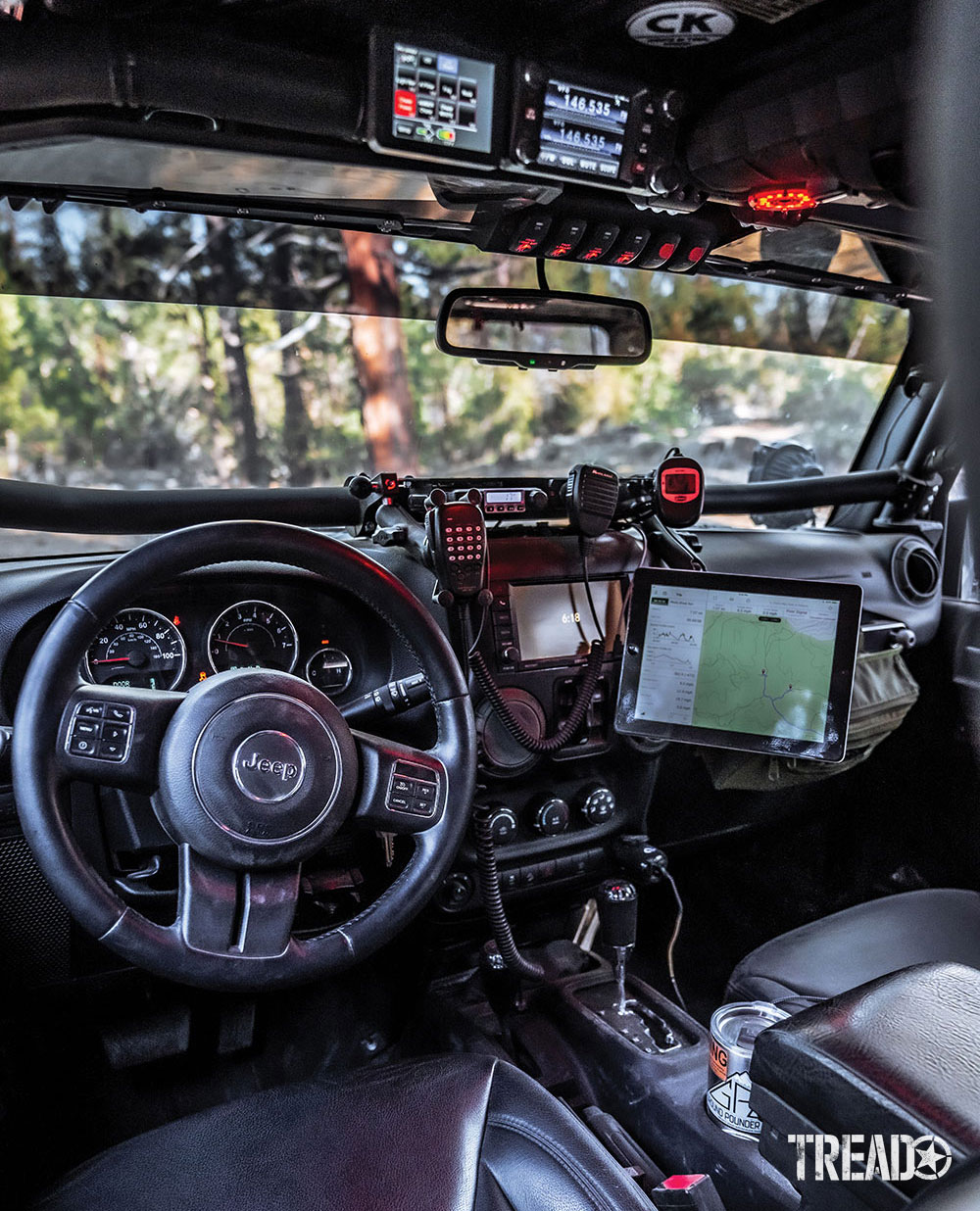 The cockpit of HQ1 shows all the comms needed and the rocker switch panel to control lights and more.

A unique feature on HQ1 the Ground Pounder Jeep that impressed us is the two-valve system. The wheels are modified to have both Colby Onyx valves and Power Tank Monster valves. The Colby Onyx valves replace standard Schrader valves where Hart hooks his ARB twin compressor to air up after a day on the trail. When he doesn’t want to spend the time filling up or airing down the monster-sized tires, the Power Tank Monster valves save the day. Hart can air down his 40s from 37 psi to 10 psi in only three seconds per tire, taking only two minutes total to do all four. Combined with the Power Tank CO2 inflation, the Power
Tank Monster valves also make airing back up a cinch.

A lot of the vehicle, particularly the Clayton Off Road kit, required customization—for which Hart’s welding skills were more than up for the challenge. He removed the original control arm mounts in front and rear and welded new control arm brackets to the frame himself.

Another place Hart’s welding and customization skills are on display is with his unique air compressor setup. HQ1’s C and D pillars on the driver’s side house an ARB twin compressor and Viair 2.5-gallon tank. In addition, a Power Tank is mounted on a D pillar on a custom-built rack.

Rock Jock 4×4 AntiRock sway bar kits are installed in front and back to provide stability when extra flex is needed on the trail. The AntiRock sway bars happen to be Hart’s favorite parts on the rig. “The AntiRock Sway Bars made such a profound difference in how HQ1 traverses any off-road obstacle. They have made HQ1 much more stable, nearly eliminated body roll in rocky terrain and greatly reduced the side-to-side ‘bouncy’ feeling when traversing rocky terrain. In conjunction with our other modifications, the AntiRock Sway Bars have truly brought the entire system together,” says Hart.

Another modification to help with traversing the rocky terrain is the Icon Vehicle Dynamics 4.5-inch 2.5 Omega shocks, paired with AEV 4.5-inch, high-capacity springs fitted to HQ1. This combination provides the travel Hart wanted for his rock-crawling needs on any terrain thrown at HQ1. 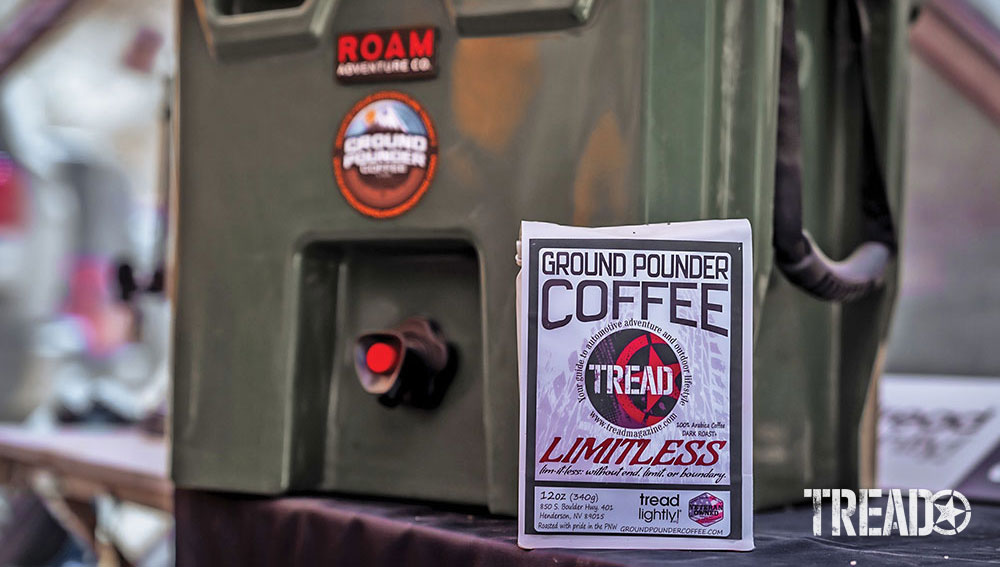 Ground Pounder Coffee collaborated with Tread to bring you a medium blend called Limitless. A $1 for every bag sold is donated to Tread Lightly!

Not to be missed is the armor on this vehicle. HQ1 is highly protected and has skid plates galore. Underneath, it has Clayton Off Road skids for the gas tank, transfer case and engine. Along with the skid plates, HQ1’s front and rear are ready to take on anything. Crawler Conceptz (now Icon Impact Off-Road Armor) rounds out the protection with its Pro Series Body Armor and Slider Kit, Pro Series Front Bumper Recessed Winch, Pro Series 2 Rear Bumper and Pro Series standard-width front and rear fenders, along with Modular Front Fender Finers. 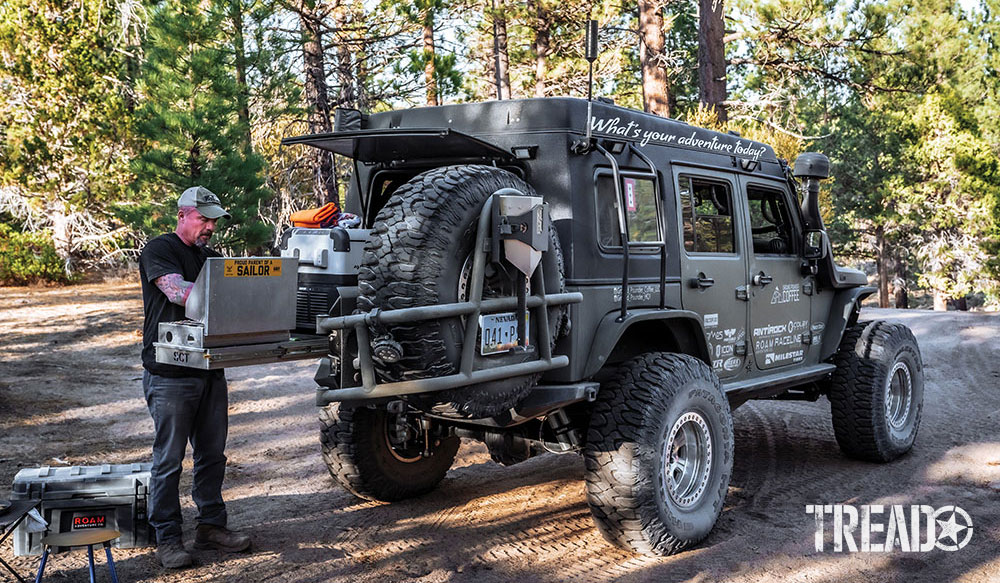 Hart prepares a meal on his stove, which is housed on a fridge slideout.

There’s Always More to Be Done

As with all Jeep builds—and really any build—you’re never done. However, Hart feels he’s nearly there … outside of the one thing everyone (and Tim “The Tool Man” Taylor) wants: more power. And that’s just what Hart plans to add to his HQ1 Ground Pounder Jeep.

“Hart can air down his 40s from 37 psi to 10 psi in only three seconds per tire, taking only two minutes total to do all four.” 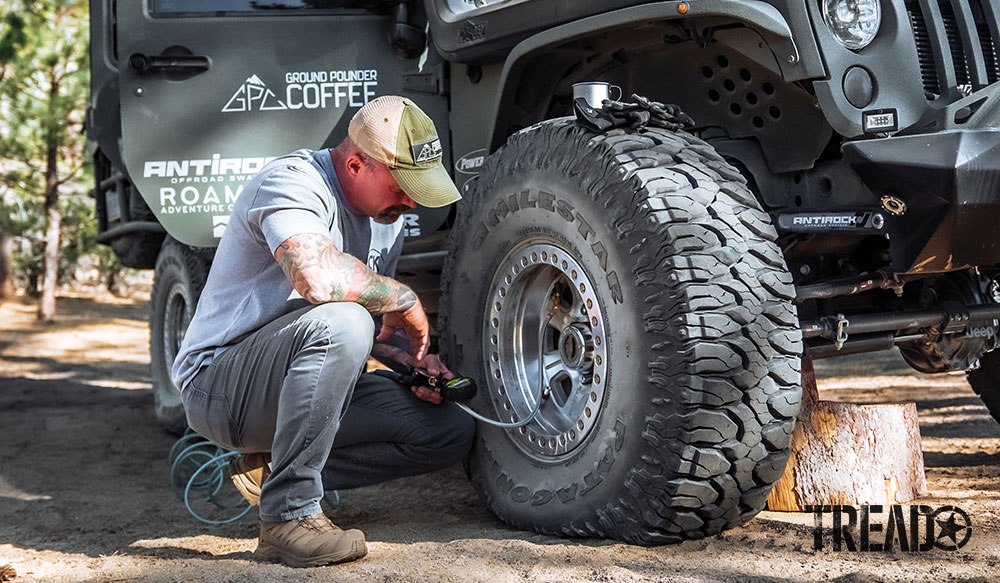 With all the weight of the modifications added, particularly the 40-inch tires, Hart says the vehicle has become very sluggish on the open road. A Ripp XL Supercharger Kit is on its way to help reduce the added weight of all the off-road modifications and should do nicely. He toyed with the idea of doing an engine swap on HQ1, but because swaps are very cost prohibitive, he opted for the supercharger kit. 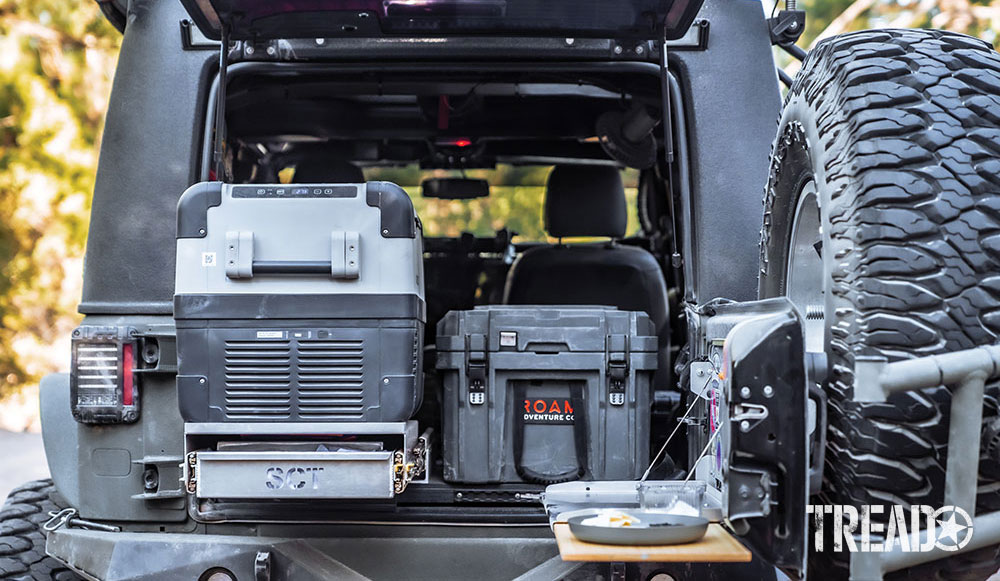 To purchase Ground Pounder Coffee, visit them online. Try out the Tread Limitless brew that donates $2 for every bag sold to Tread Lightly!