→ Submit your rig and win a Tread magazine feature of your truck! ←
Get the Magazine
Jeeps, Vehicles
Written & Photos by Bryon Dorr

A Versatile 2007 Jeep Wrangler Goes From Rocks to Trophies 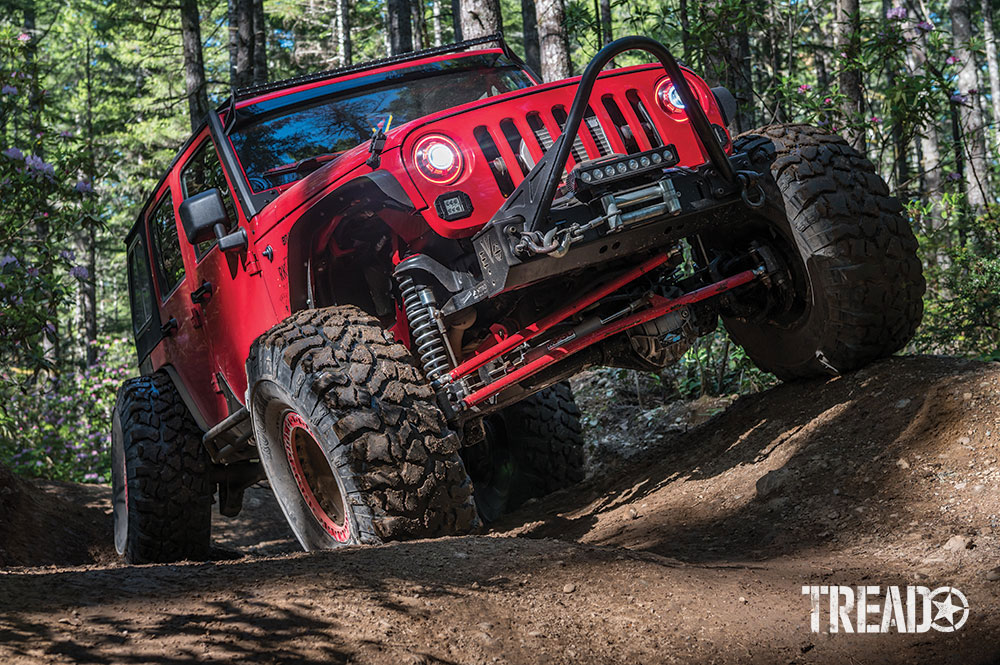 There are car guys, and there are motorheads. Andrew Vun is a motorhead. He likes tinkering, building and enjoying anything with a motor—import tuner cars, off-road machines and even motorcycles. His passion for cars started with the import tuner scene when he was in high school. He went through a number of builds before getting super-deep into a 2004 Subaru WRX. He got so deep into the import tuner show scene that he was winning, but the car was no longer street legal, because of multiple mods … such as the headlight being replaced by a turbo inlet.

With the Subaru off the street, Vun needed a daily driver and a vehicle that could tow. He started searching for something that could handle all kinds of weather, since he lives in Washington. After some Craigslist sleuthing, Vun stumbled upon a 2001 Jeep WJ Grand Cherokee. He knew little about Jeeps, but he figured it would be a good vehicle for his purposes.

Little did he know, this Craigslist find would take him down a new and exciting path.

Vun’s interest in his Subaru show car faded pretty quickly as he found adventure, friends and learned the ins and outs of building a capable 4×4 with his Grand Cherokee. He spent all his free time and a lot of money building up the WJ. However, in late 2014, it had a catastrophic engine failure. Vun thought long and hard about whether to put a new engine in or embark on a new off-road build. Even though he knew he’d never get back the money he had put into the WJ, he sold off the valuable bits and then sold the build in its non-running state.

The modification routes he could go down on a JKU are nearly endless, and that appealed to Vun’s desire for capability and car show attention-to-detail sensibilities. 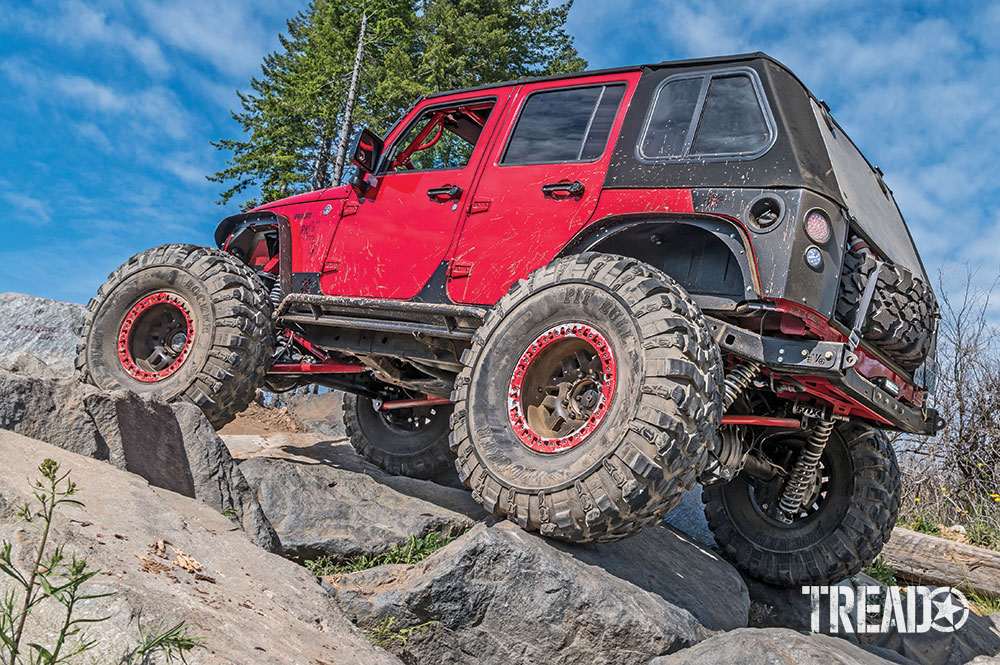 It was time to start from scratch and put the lessons he’d learned to work.

All the options were considered: a Toyota,  an American pickup, an old Land Rover or another Jeep. With the truly massive aftermarket support behind the Jeep JK Wrangler, it was the avenue Vun chose. The modification routes he could go down on a JKU Jeep are nearly endless, and that appealed to Vun’s desire for capability and car show attention-to-detail sensibilities.

In early 2015, Vun purchased a red 2007 Jeep Wrangler Unlimited Sport, and he quickly got to work on the modifications. 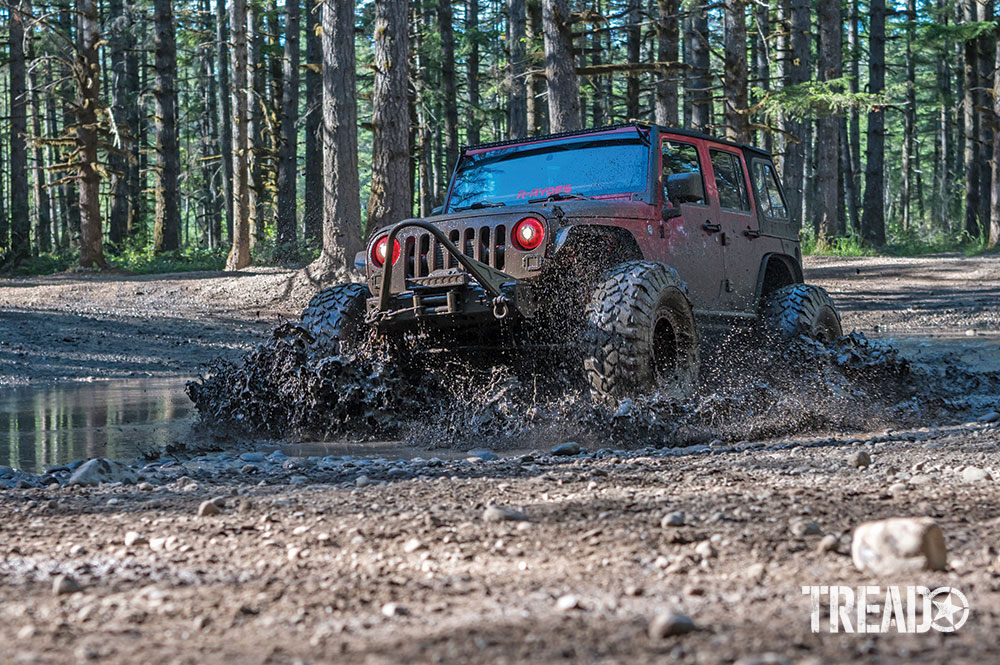 The first iteration of this 2007 Jeep would be a fun and capable “weekend warrior” build. This was the setup you see on most modified Wranglers: 4-inch lift, 35-inch tires, metal bumpers and a winch. Vun enjoyed this setup for some time, progressively tackling more-challenging OHV park trails.

That, of course, meant he was breaking more and more parts and upgrading Jeep components along the way. Just one weekend after Vun had sleeved his axles, he managed to snap his Dana 30 clean in half. Luckily, the sleeve allowed for a trail fix that allowed him to drive the 2007 Jeep home.

As many of us do when parts break, Vun looked at it as an opportunity to take the build to the next level. As many of us do when parts break, Vun looked at it as an opportunity to take the build to the next level.

First up of course, was ditching the stock Dana 30 and 44 axles and upgrading to Rubicon Dana 44s with upgraded gussets and sleeves. Bigger tires are always useful in rough terrain, so 38-inch tires were installed on beadlock wheels.

With all that rolling mass, it was time for proper gearing and more power. The axles were fitted with 4.88 gears, and an RIPP supercharger system was installed. The supercharger, along with a custom tune, bumped horsepower from 230 to about 300 ponies.

Because of this second round of modifications Vun’s friends started prodding him to take the Jeep to car shows. He was hesitant at first because he’d never heard of, or seen, Jeeps at the shows he attended. Mini trucks, lowrider trucks and insanely lifted, street-focused builds were common, but off-road Jeeps weren’t—especially ones that were actually used. In the end, Vun decided it was worth a try and applied his past car show knowledge and experience to his Jeep.

Vun decided it was time to go huge and really build something he could use to tackle any terrain he wanted and then polish up to win shows. 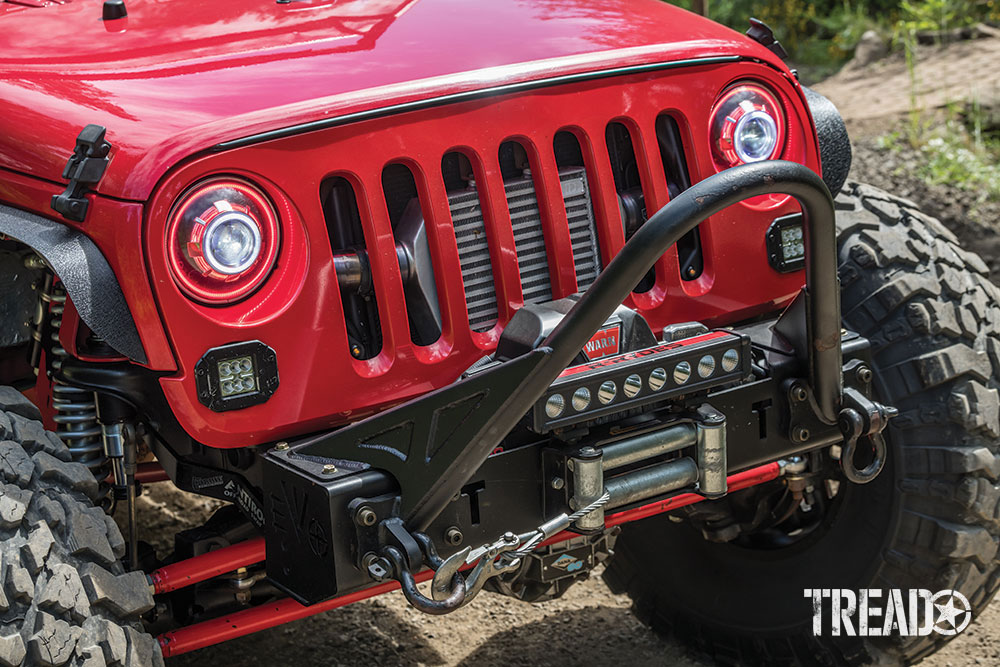 Nearly every part on this JKU has been modified in some way. Details matter— both on the trail and on the show circuit. 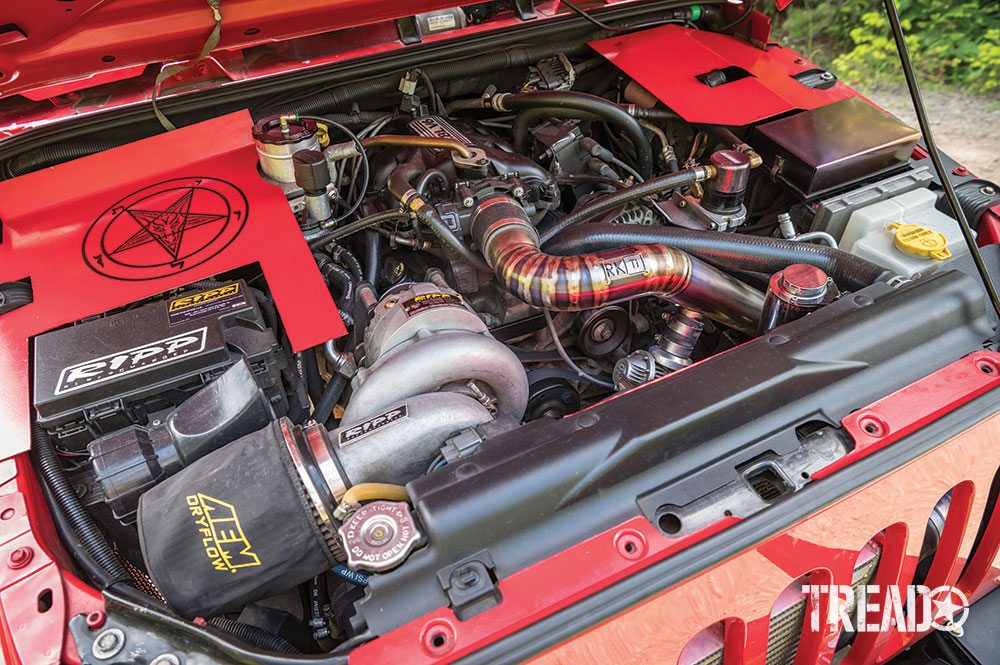 The first shows with the Jeep were just small, local events, but Vun’s build quickly got plenty of attention, because attendees seemed to like seeing something they weren’t used to. The car show judges were also a bit lost on how to judge the vehicle because they’d rarely encountered off-road builds at the import shows. This attention turned into top awards at most of the local shows: Best Truck/SUV, Best Off-Road and even a Best of Show. After that first Best of Show award, Vun was approached by his friend, Rob, to join the highly competitive show team, the “R-Rydes,” all of whose members were looking for a local truck/SUV class competitor. Vun resisted at first: He didn’t want to “baby” his 2007 Jeep JKU just to show it off at shows at a super-high level. Rather, he loved wheeling it hard on the weekends.

Even so, Vun eventually joined the team and found his niche—having an off-road vehicle that’s excessively used as an off-road build and a show build at the same time.

Stepping Up to Show Car Standards

After showing with the R-Rydes team for a year, Vun had learned a lot about the professional show scene. Many people appreciated his build; however, just as many didn’t believe it actually got used to its full capabilities off-road (haters are going to hate). 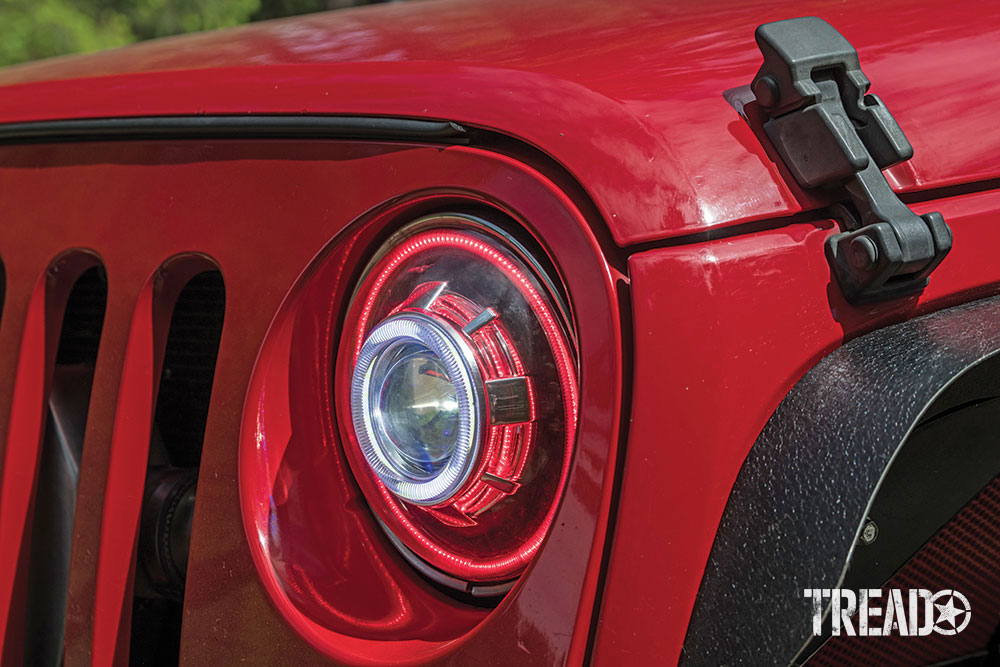 Because Vun’s Jeep gets used hard off the pavement, he doesn’t mind breaking a few parts if it means he can have fun with his friends in the rocks, mud, and steep, technical trails at the local OHV parks. Clearly, this Jeep was built for capability, but Vun also realized that paying attention to every little detail on the build would be the only way to stay competitive at the shows—color-matching, custom parts and so on. As Vun was preparing for the next evolution of this build to stay competitive at the shows and to tackle harder terrain on the weekends, the COVID pandemic shut down everything. Vun was lucky enough to keep his career on track, but he went an entire year without a single car show and with a lot fewer off-road adventures. This allowed him the time to do a deep dive and really plan out the direction for the 2007 Jeep.

Vun decided it was time to go huge and really build something he could use to tackle any terrain he wanted and then polish up to win shows. Of course, this meant big-built Dana 60 axles, 40-plus-inch tires and coilover suspension. The issue with that plan, however, was … the big money required to pull it off. Not to be missed is the quick-disconnect steering wheel—in a Jeep.

After much research and some sleuthing through the classifieds, Vun picked up a Dana 60 out of a 2004 Ford SuperDuty for only $500. After a bunch of time and labor doing fabrication work on that front axle, it was ready to go into the Jeep, along with a hydraulic steering-assist system. With the money he saved on the front axle, Vun was able to put together enough to buy a fully built Ultimate Dana 60 complete rear. He then bought a full Fox coilover suspension setup. Over one weekend, and with the help of some good friends, Vun had it all installed into the Jeep.

Vun’s first plan for the Jeep after the upgrades was to tackle the hardest trails at the local OHV park, Tahuya (which is also where the photos for this article were taken). It was close to home, so Vun figured that in the worst case, he’d have to get the Jeep towed home. That didn’t need to happen, though, because the Jeep’s capabilities were second to none; it easily ate up the hardest trail sections Vun could throw at it. 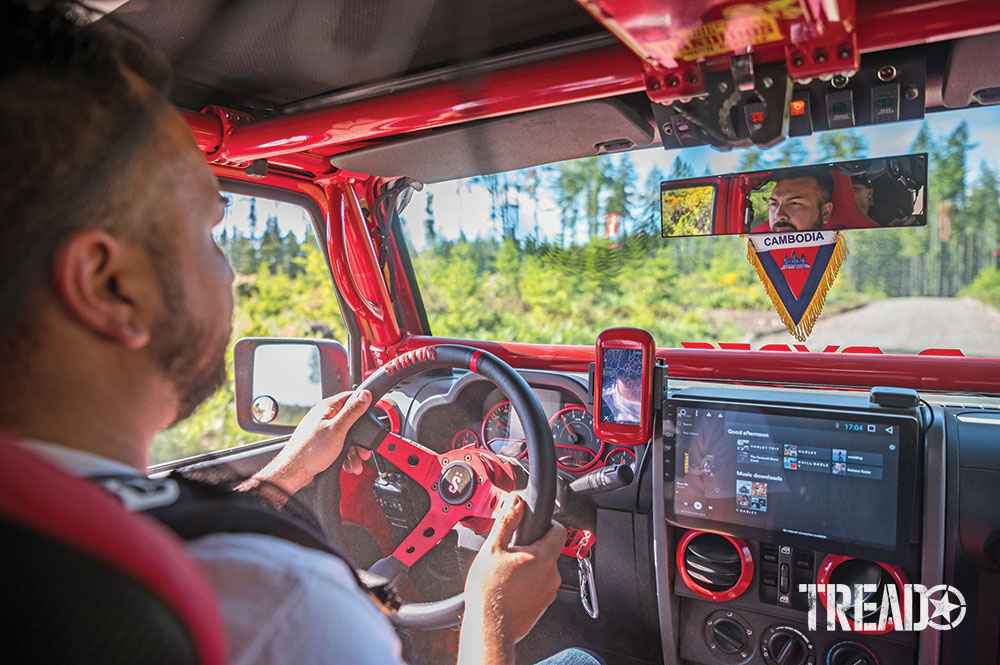 Vun loves strapping into the harness and hitting the trail.

Vun says this one trip changed his style of off-roading forever. As he pushed the jeep to tackle harder and harder terrain, the adrenaline rush was addictive. Whether he was bouncing the Jeep up a rock section or jumping it in mud pits, he just couldn’t get enough. This is how a built rig such as this is supposed to be used, and Vun wasn’t going to baby it just to do well at shows. 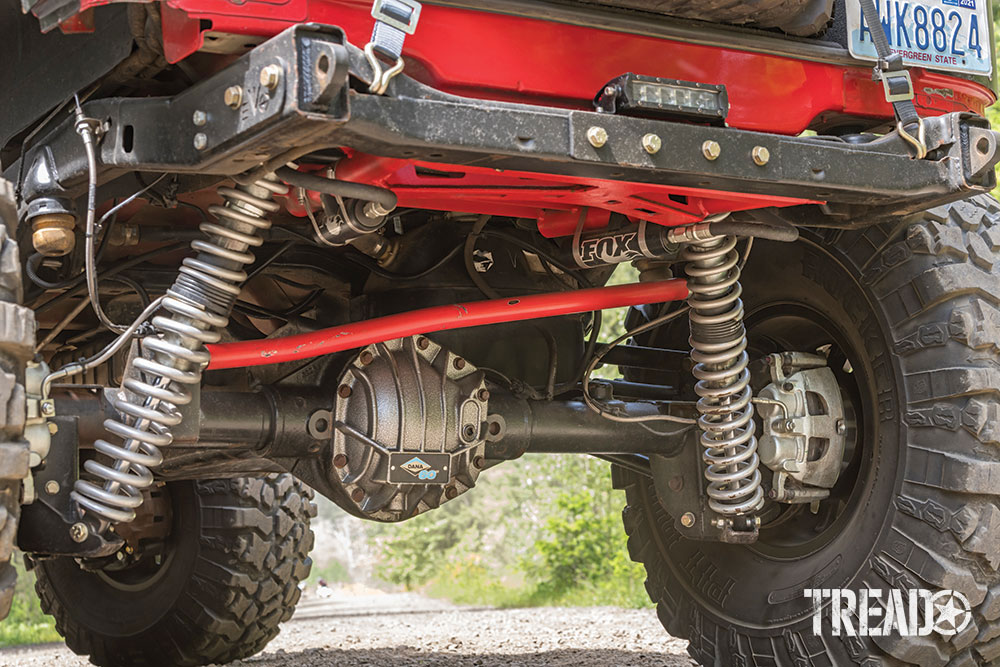 A Dana Ultimate 60 with all the goodies ensures Vun is unlikely to break another axle.

However, this doesn’t mean he wasn’t going to try hard to do well at shows. The first show since the upgrades and pandemic restrictions were loosened earned Vun both Best Truck/SUV and Best Display.

As we all know, builds such as this are never “done.” Vun realizes that while he street-drives this beast now, any more over-the-top mods will relegate the Jeep to a life on a trailer to get to and from both OHV parks and car shows. Vun says this will eventually happen, but for now, he’s enjoying being able to drive the Jeep to and from the local trails and shows. This show vehicle also plays in the local mud pit.

The next evolution of this Jeep will involve more suspension, more power and even more unifying details. Rear long arm suspension, an LS swap and matching rear Braum seats are on Vun’s short list for what’s next.

He Found His Niche

Looking back at his automotive adventures so far, Vun says he would have never expected to be “into” 4x4s. He thought import cars would always be his “thing.” Instead, he’s found his niche with this 2007 Jeep JKU, combining his passion for shows with that of building a capable vehicle to be used as intended: a single vehicle he can enjoy in the mud and rocks, as well as among the shiny, polished vehicles in a car show.

[Vun has] found his niche with this Jeep,combining his passion for shows with that of building a capable vehicle to be used as intended: a single vehicle he can enjoy in the mud and rocks, as well as among the shiny, polished vehicles in a car show. Vun proudly holds trophies for both Best Truck/SUV and Best Display at a 2021 Import Face Off show.

Vun would like to send a special thanks to his fiancée, McKenna, for all her love and support over the years. He also wants to thank his sponsors and those who continually chip in so he can take his build to the next level. At the top of his list are Baileys Complete Automotive, show team R-RYDES and friends Rob K., Ariel S., Brandon H., Brandon M. and Camrin B.