→ Submit your rig and win a Tread magazine feature of your truck! ←
Get the Magazine
Features, Trucks, Vehicles
Written by Mark Purodominsky
Photos by Corey Whitaker 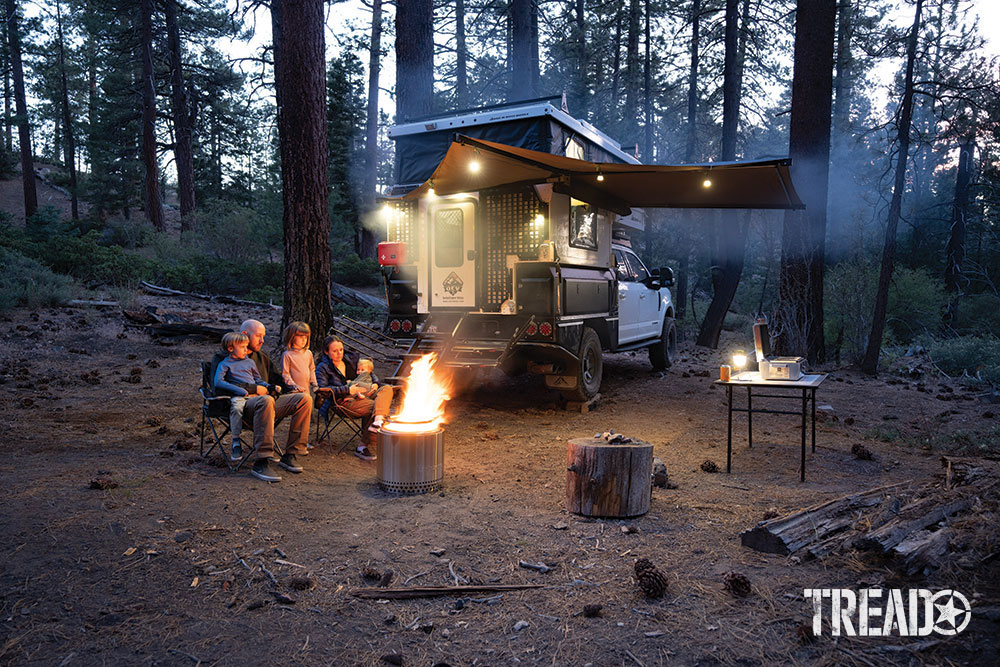 Sometimes, we get to meet really special people who have their priorities in order and their lives in good perspective. This is most definitely the case with Corey Whitaker. Before anything else, he’s a dad and a husband. His role in the family defines everything in his life, even when it comes to building bad-ass off-road vehicles, like this 2021 Ford F250 Super Duty camper. 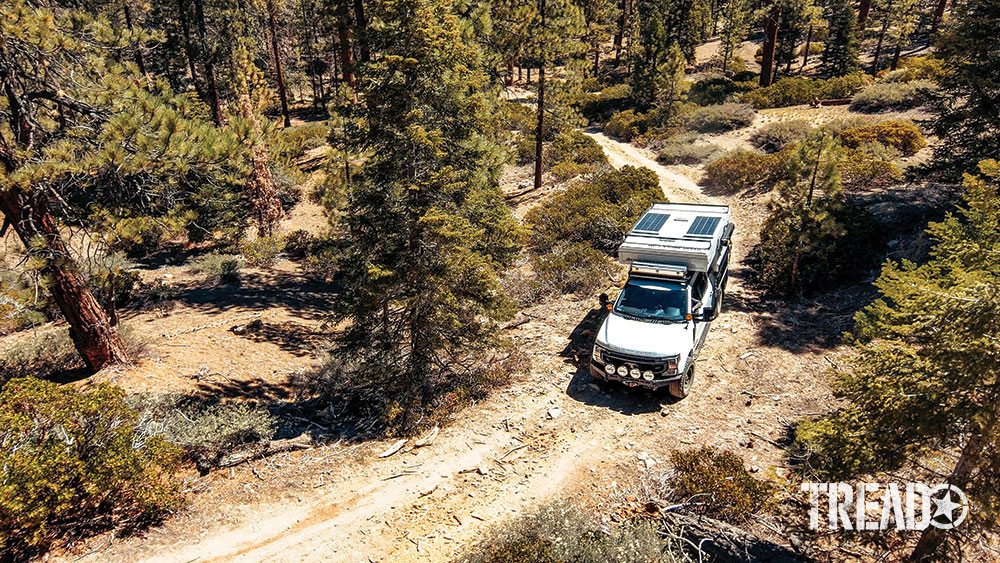 The 180W solar panels, an option for the Camper-X, are mounted up top to extend off-grid adventures.

Corey became interested in nature and camping at a very young age. He explored with his own family since before he can remember, and his wife grew up loving camping too. When he got his first real job, he bought a Scion TC, thinking he could easily take it to the mountains. After a winter of having to use chains to get up to the mountains, he quickly realized that he had made a very bad mistake. He also realized that this vehicle was a huge limiting factor in his outdoor fun. So, he bought a 2008 Toyota Tacoma 4×4 double cab short-bed—the rig that sparked his love for off-roading. 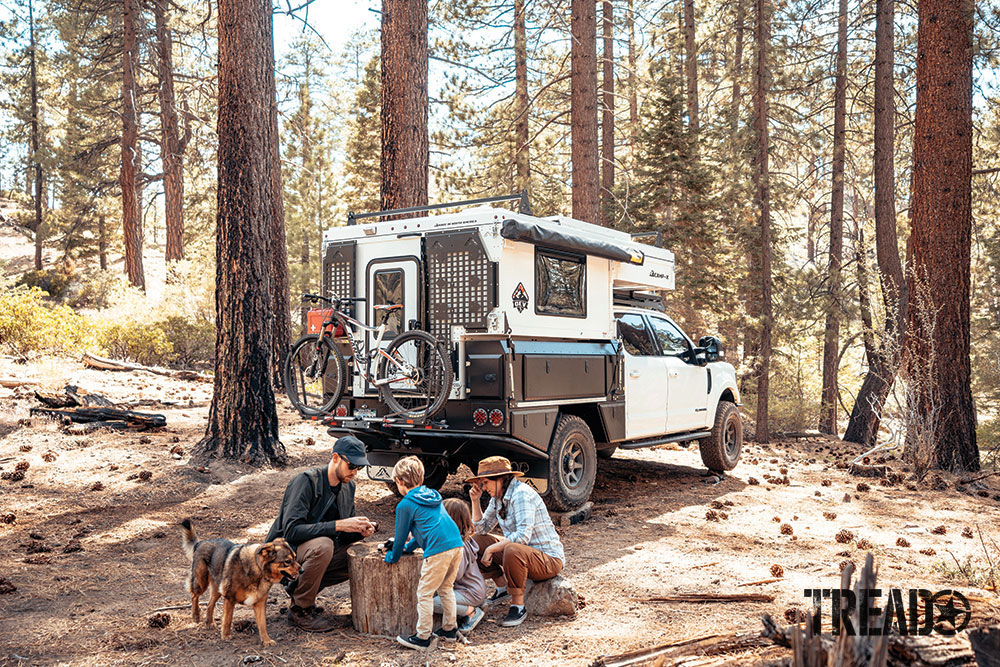 The Whitaker family stops to play on a tree stump while deciding if this area is the best camp spot.

After six or seven years of learning the ropes while off-roading in countless locations, Corey started to take more interest in more-vehicle-based camping using BLM and state land to cover more ground and explore more trails. While wheeling was an activity he did mostly with friends, his wife would come along for the camping.

“As long as I can remember, I’ve been into the outdoors,” Corey says. “I was brought up camping, and so was my wife, Anna.”

Around this same time, Corey and Anna’s lives would forever change: Their twins, Emma and Gavin, were born, giving Corey his true namesake as the “OverlandDad.” He started a new Instagram account dedicated to documenting the family’s adventures and, of course, truck pictures. While most of his friends didn’t understand the whole truck “thing” or off-roading in general, Corey had found his creative outlet. It became an amazing way to document his beautiful family and their adventurous experiences together. “It’s a creative outlet for me that has become a big part of my identity,” Corey shares. “I’ve met so many of my friends as a result of starting the account and have also met some really awesome and inspiring people along the way.”

The off-road community, coupled with social media, inspired him to start both his Instagram and YouTube accounts, which really fueled his interest in photography and videography. What started as a way to document his family outings turned into a creative process that continues to inspire people all over the world.

Out With the Old, in With the Bad-Ass F250 Camper

While Corey has had a couple of cool rigs, the first one that really stood out was his incredible 2016 Toyota Land Cruiser 200 series. It was decked out with all the goodies necessary to take his whole family off-grid for days. It was also one of the only long-travel LC 200s in the world—and a massive inspiration to the entire JDM off-road community. Unfortunately, it was also a prototype suspension kit that brought a lot of its own issues. The Axial remote truck provides plenty of entertainment for the kids when camping.

On a trial run at the Gorman suspension test track, Corey’s CV took its final turn before it exploded.

Now imagine: Your vehicle is inoperable, and you’re waiting for a tow truck in the pitch-black night with two small children. Most normal parents would freak out, but Corey was prepared with hot cocoa, fruit snacks and mac-and-cheese. His kids barely even noticed anything was wrong. The tow truck came, and off went the Land Cruiser.

Even though he has the ability to house an army, Corey still wanted to be able to get to his favorite, super-remote camping spots. With this monster of a build, he still can. 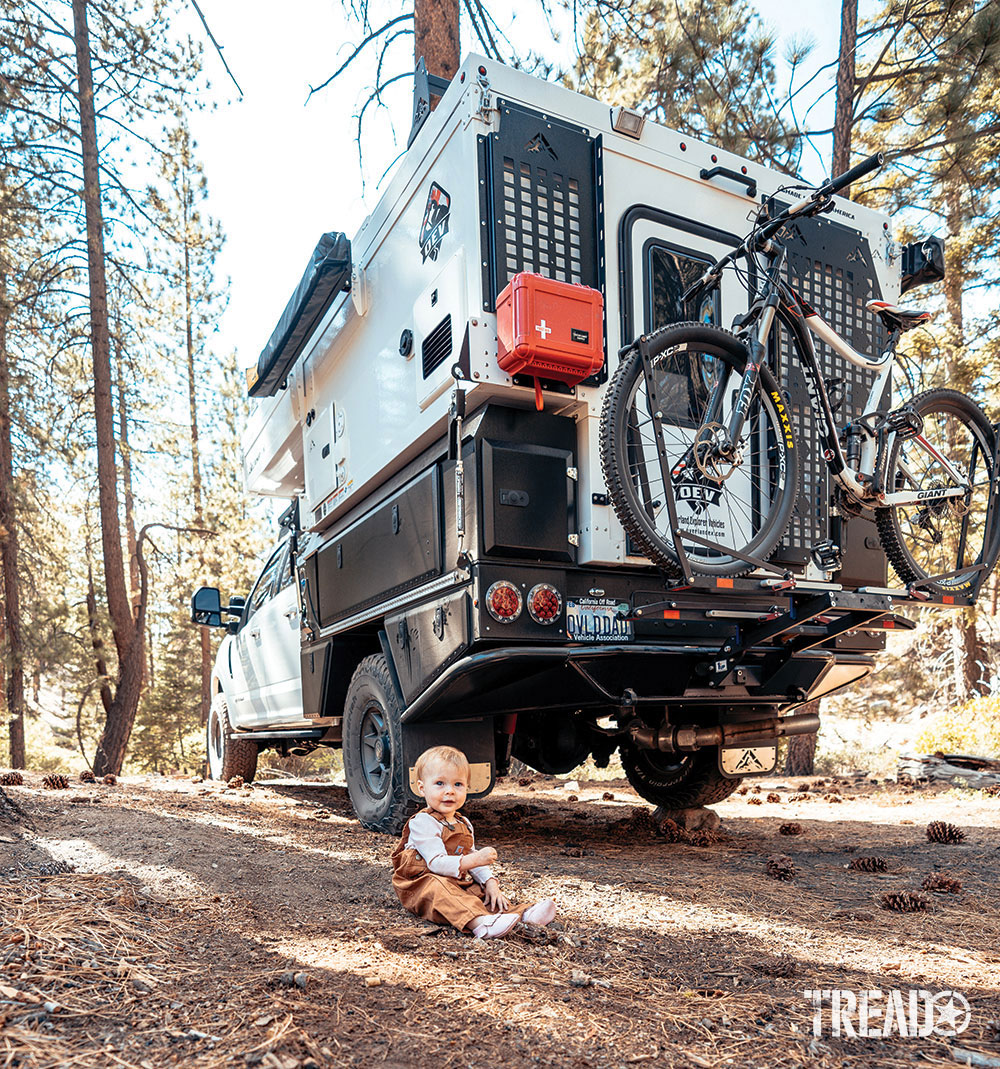 The stairs to the X-Camper discreetly fit in the headache rack behind the cab.

That whole suspension debacle gave Corey an excuse to start letting his eyes wander into the distance for a potential next build. At this point, their third child, Sierra, was well on her way.

Corey says, “It was around that time that we realized we needed a bigger vehicle if we wanted to be comfortable on our adventures.” 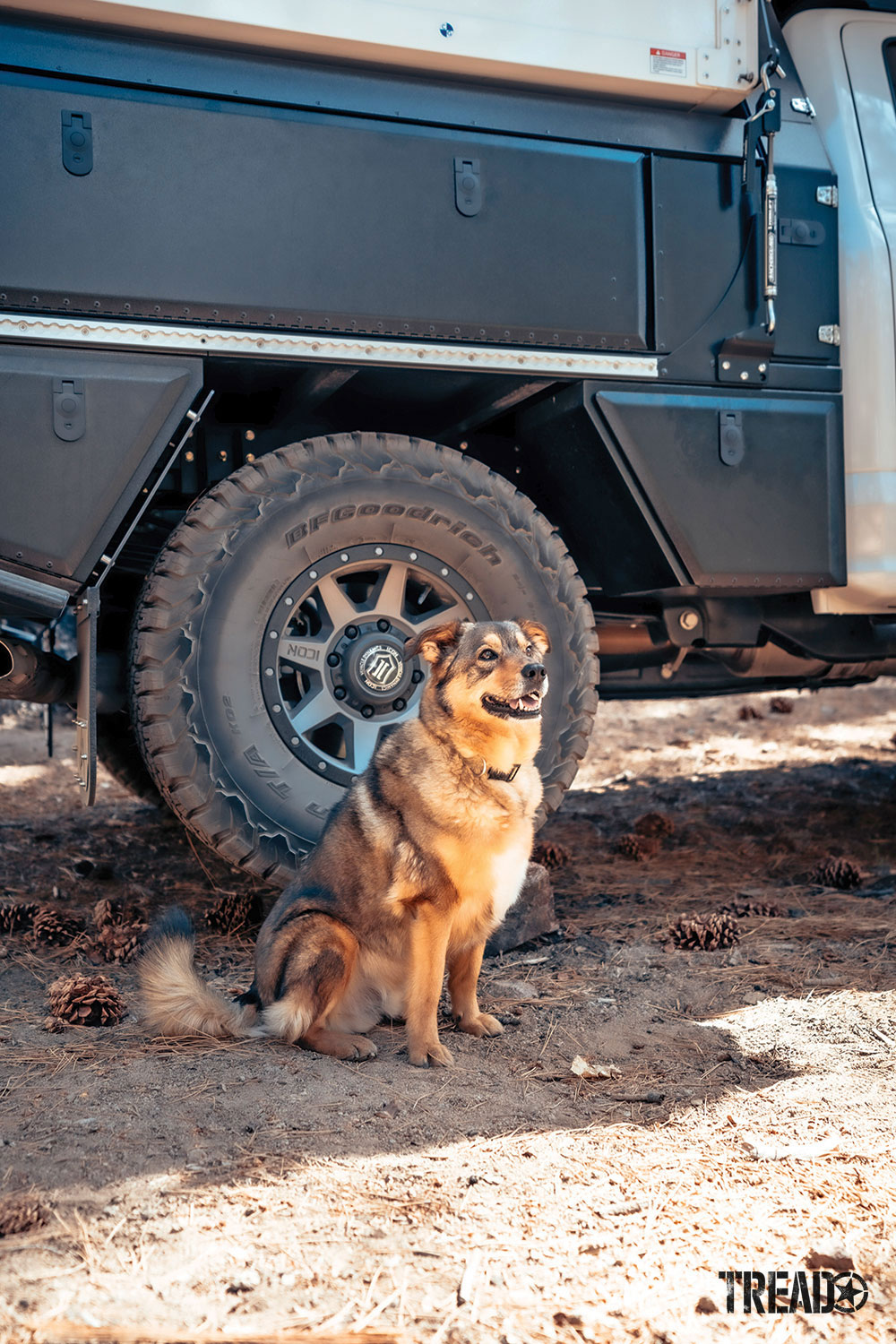 So, Corey decided to “shift gears” and move into the next build: He shot for the moon and purchased a 2021 Ford Super Duty F250 Tremor 6.7L Turbo Diesel. This monster of a truck puts down 475 hp and 1,050 lb/ft. of torque (yes, you read that correctly: 1,050 lb/ft. of torque), and he needs every bit of that power to take this beast of a truck to the most remote of mountaintops. 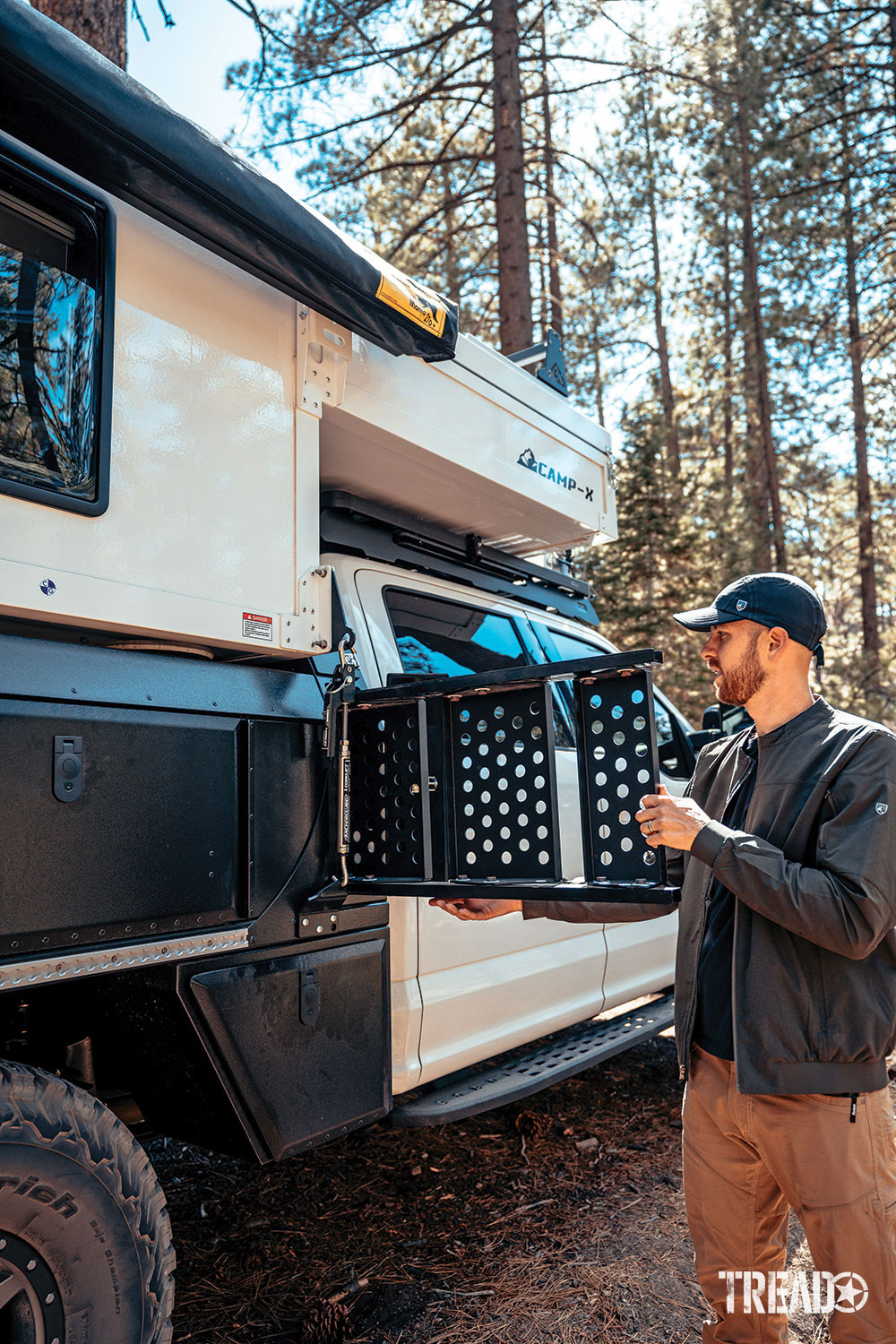 The 1up bike rack easily attaches to the trailer hitch, allowing Corey to bring his bike on camping adventures.

The Ford F250 Super Duty Camper build also comes with a list of priorities to keep his wife and kids content. After a few well-planned, thought-out rig builds under his belt, Corey felt super-confident about his experience and started this insane F250 Super Duty Camper build. He and his wife made a plan and started with their list of absolute priorities.

“Corey and Anna now have three kids … and they get filthy. Keeping them clean before bedtime was incredibly important.” 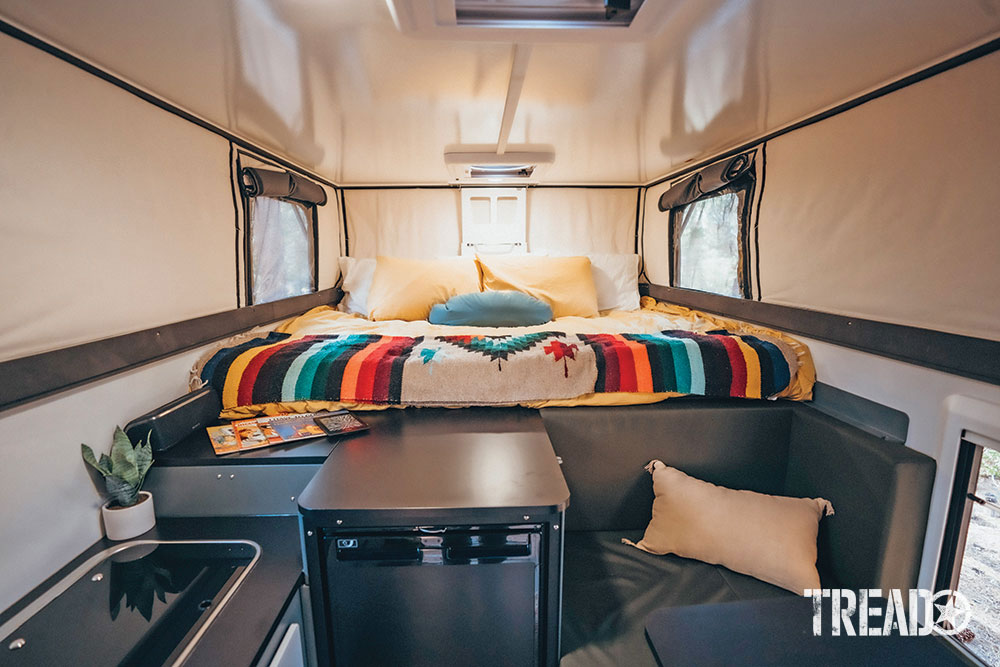 The queen-sized bed can also be easily converted into a king.

Running hot water. When there are five people, dishes tend to stack up fast. Nobody wants to wash dishes in the freezing cold—with freezing cold water—in the dead of winter. Also, after a long day of hiking or snowboarding there’s nothing better than a hot shower. In addition, Corey and Anna now have three kids … and they get filthy. Keeping them clean before bedtime was incredibly important.

A place to unwind. When the weather gets bad, it’s always nice to have a place to retreat to. Rooftop tents don’t always cut it, especially when you have an “army” of kids. Too many bodies in a rooftop tent is not a place to relax and unwind, let alone sleep well. The camper gives them a decent-sized space to entertain the kids and be a family, all while out of the elements. The kitchen area is complete with a sink, cooktop and plenty of storage below.

Low-profile camper build-out. Building a cabin-on-wheels is tough. Keeping it as low profile as possible is even tougher. And, it must also be able to avoid low-hanging branches and juts in rock walls. Being able to explore some of the more remote places of this country and the simple ability to rip through a fast-food drive-through come with their requirements. The OEV Camp-X does just that for Corey and his family. The OEV Camper-X allows plenty of space for the twins to hang out inside while Anna prepares a delicious meal.

Off-road capability and agility. While Anna couldn’t care less about the vehicle’s power, performance or articulation, they were all important to Corey. He wanted to be able to cover some of the more gnarly and technical terrains. Even though he has the ability to house an army, Corey still wanted to be able to get to his favorite, super-remote camping spots. With this monster of a build, he still can.

Corey purchased this vehicle in February 2021, and in just three or four short months, he pretty much got himself one of the coolest off-road rigs in the country.

The guys from OEV made an amazing pop-top camper. It, along with the Aluma Tray, was installed by Pop-Top Overland. Ben from Dissent Off-Road built and installed the front bumper and a WARN Zeon 12-s Platinum winch. 1T4 Fabrication’s Brandon designed and built the rear bumper and made a custom hitch to raise it 6 inches for the ultimate departure angle. Tucker from Frontrunner Outfitters provided and installed the roof rack.

“This monster of a truck puts down 450 hp and 1,050 lb.-ft. of torque … and he needs every bit of that power to take this beast of a truck to the most remote of mountaintops.” 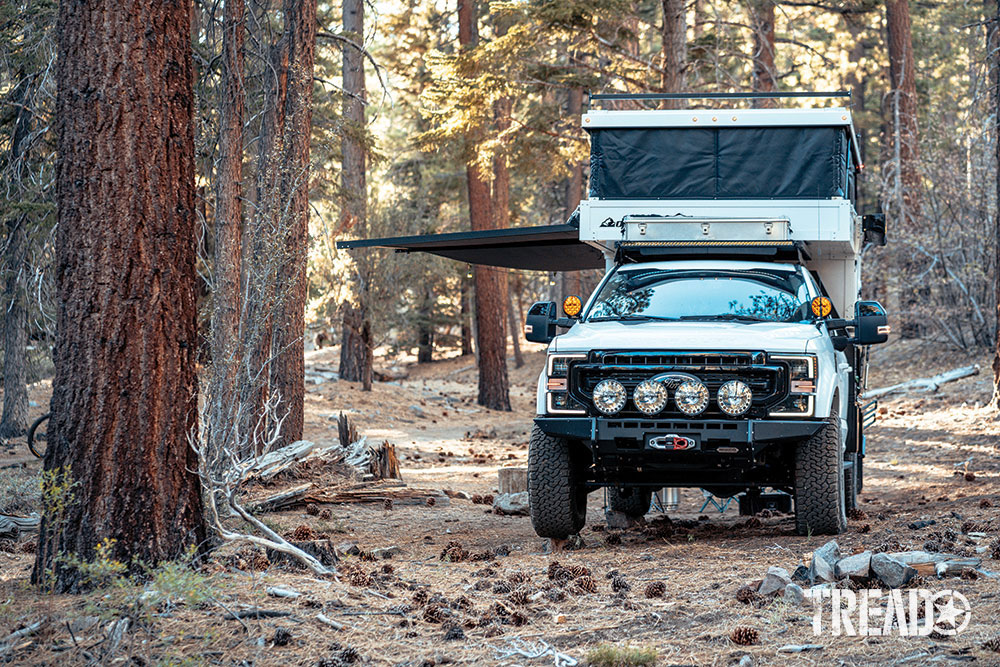 Corey, himself, did all the wiring for the Lightforce lights all over the truck, including four HTX2 lights on the front bumper, a 50-inch, single-row lightbar, two Venoms on the A-pillar, two Venom amber spot covers and nine ROK9 lights (under-truck lights).

This bad boy sits on a set of 17×9 Icon Rebound HDs wrapped in a set of 37-inch BFGoodrich TA KO2 tires. Soon, it will articulate beautifully, thanks to a full Carli Suspension setup specifically tuned for the extra weight of the camper, which includes a torsion sway bar, a track bar, high- and low-mount steering stabilizer, adjustable radius arms and a full progressive leaf spring. 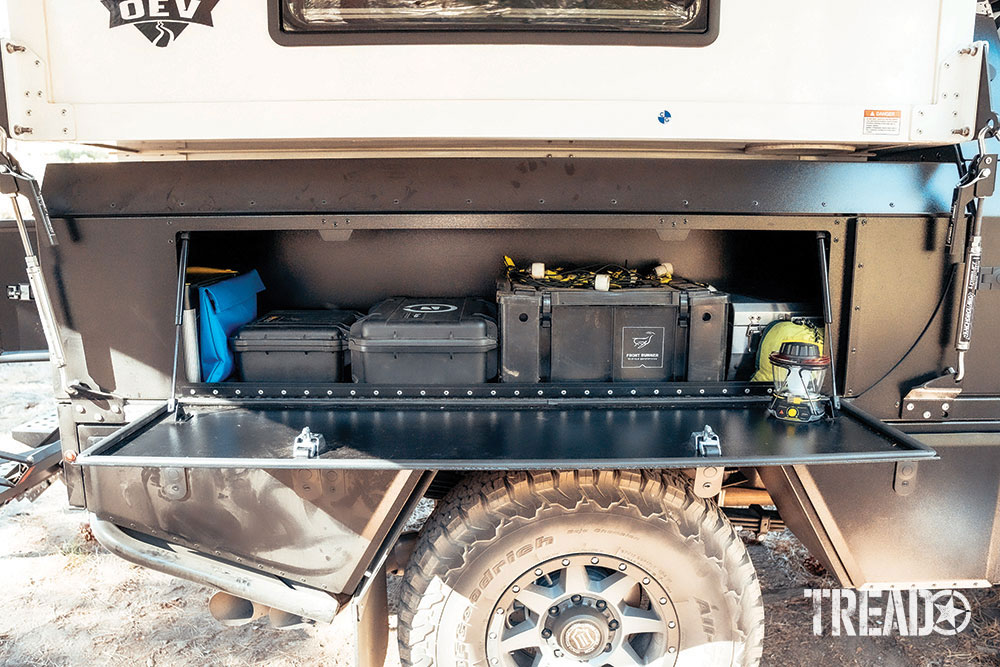 The Overland Explorer Vehicles Aluma Tray provides extra storage on the outside of the vehicle—perfect for Corey to store recovery gear and more.

Lastly, there are also some awesome overland accessories in the form of an Eezi Awn K9 shower cube, an Eezi Awn Manta awning and a 1up bike rack.

To handle all the communications and make sure Corey stays the course and in touch, he installed a Garmin inReach Explorer+ in conjunction with a Yaesu FTM 400XD. Dealing with the power management, Corey called upon RedArc Australia to bring in the big guns in the form of a Manager 30 power management kit. Inside the cabin, holding up all the important stuff—including phones, screens and radios—are Ram mounts attached to a Built Right Industries dash mount. Lastly, the most prominent interior mod on this behemoth is car seats—lots and lots of car seats. In the cockpit of the F250, comms are easily within reach.

This is a brand-new rig for Corey and his family. In fact, the photo shoot for the images you see here spawned the family’s first trip. The Whitaker kids will have myriad stories to tell about their childhood adventures. Those memories won’t only be fun to reminisce about, they’ll also be able to relive them for many years to come.

“Nothing beats seeing your wife and kids having the time of their lives in the country’s most remote locations, building priceless memories for the rest of their lives.” 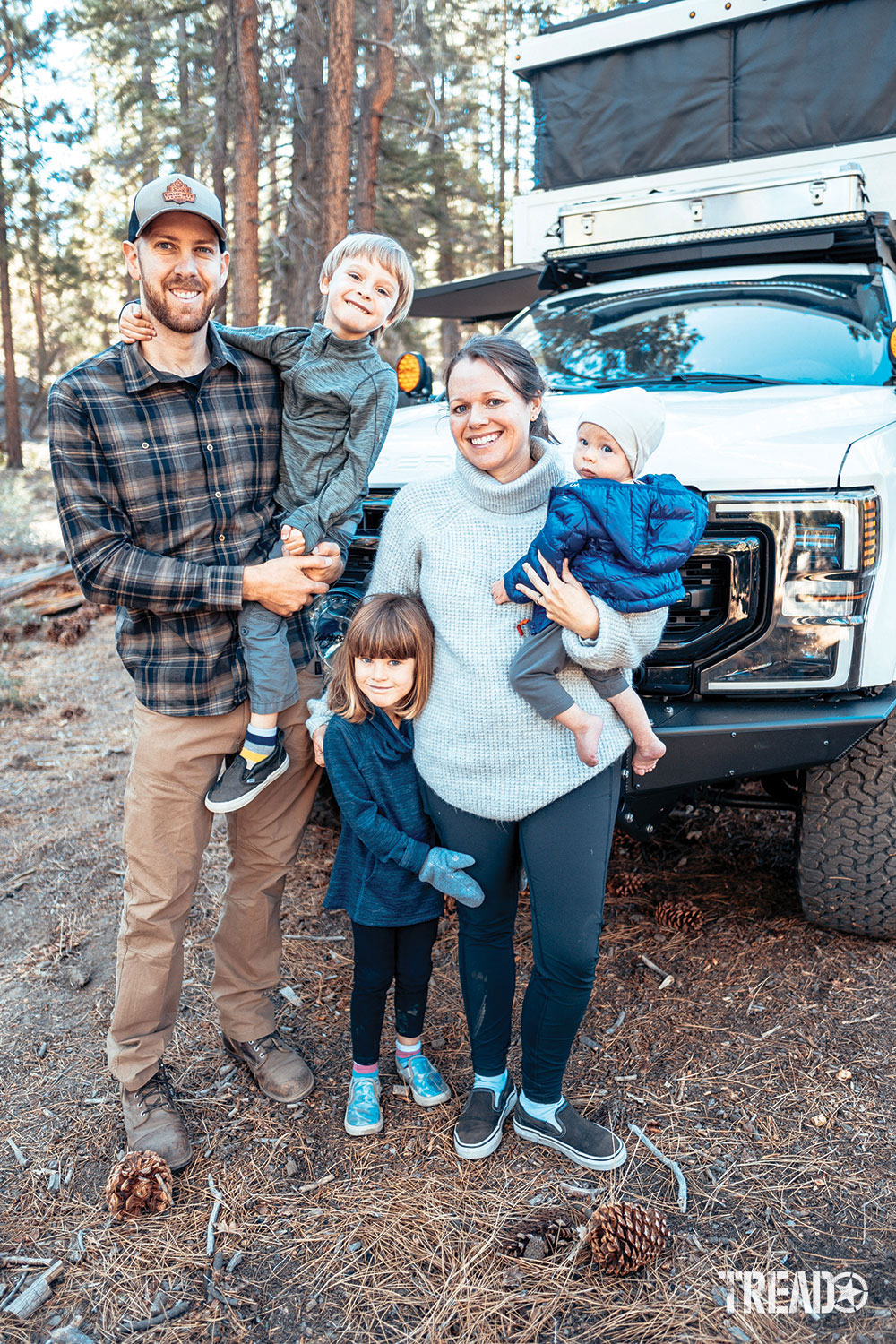 The smiles upon smiles seen on the faces of the Whitaker family are a sign that the F250 X-Camper is a hit.

The Price of Happiness

One of the questions people ask is, “How much did it cost?”

While we, the public, will never truly know, Corey knows it’s all money that’s well spent. He’s kept track of everything to the penny because as an accountant, keeping track of every, last penny isn’t just his job, it’s also his obsession. The Eezi-Awn Manta awning provides 270 degrees of shade around the truck.

Who could ever put a price tag on happiness? Corey can, but he’ll never complain because, for him, this is what life is all about. Nothing beats seeing your wife and kids having the time of their lives in the country’s most remote locations, building priceless memories for the rest of their lives.

The future is bright with this build. Corey has plans to take it all the way to Alaska for one of his many planned long trips, along with as many day and weekend trips as time allows.

Follow along on Corey Whitaker and his family’s adventures @OverlandDad.