There’s a reason so many people call California home. From the proximity to the ocean to the year-round great weather, but for Florida transplant Rafael Rubio, living in California provided an opportunity to satisfy his urge to travel and explore. Several failed attempts at road trips, due to overpriced hotels, led him to discover the growing overland movement, and he hasn’t looked back since.

The economic downturn forced his previous employer in Miami to go out of business in 2011; it was then that Rubio began a search for a new job. The search brought him to the annual SEMA tradeshow in which he was able to land a position at TSW Tires in California. Rubio and his then-girlfriend (now wife) packed up their belongings and headed west. The couple began to enjoy their new surroundings and their explorations would lead them further and further off the beaten path, which would require a vehicle that was more capable. 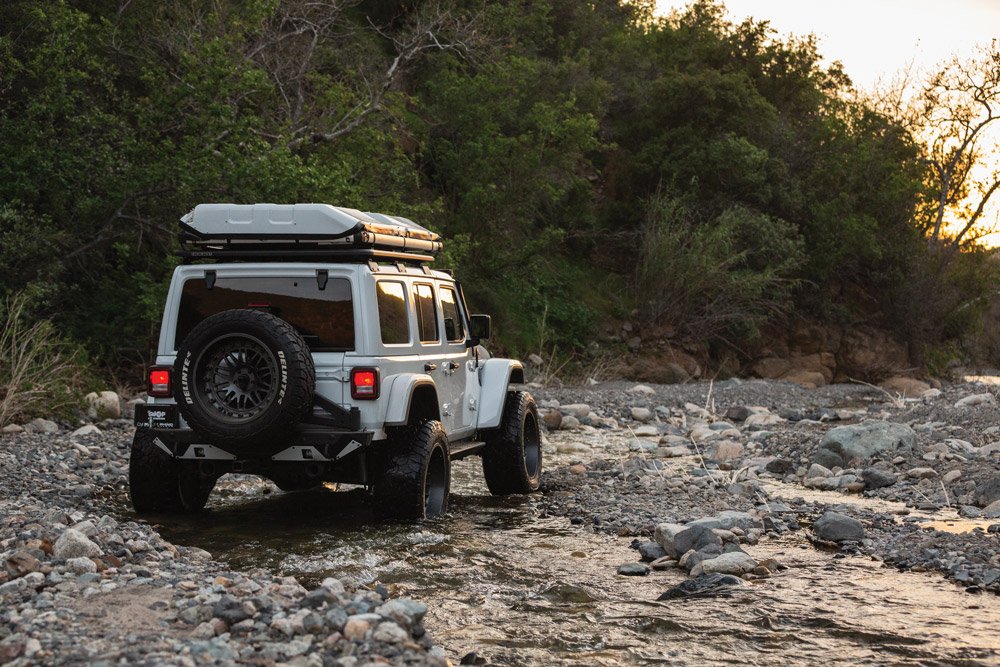 This also led him to research the perfect vehicle to help him satisfy his wanderlust. He decided on the Jeep Wrangler for its durability and reliability. He would come to find his dream vehicle at JStar Motors in Anaheim, California. The Jeep was brand new with 0 miles—which wouldn’t stay that way for long. 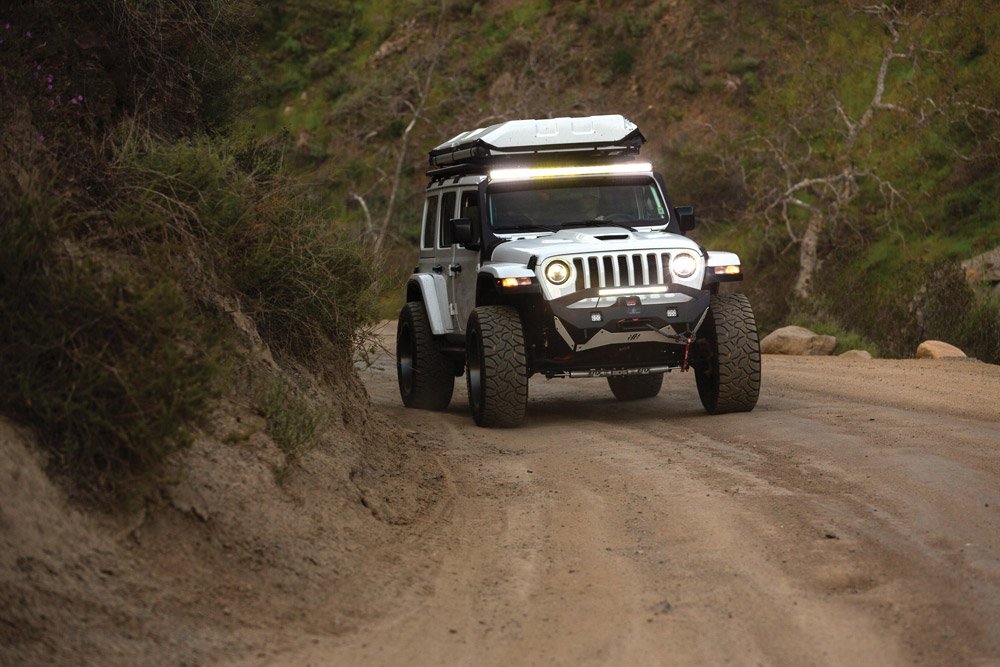 This Jeep was brand new with 0 miles when Rubio bought it. It wouldn’t stay that way for long.

The build process then began. One of the main reasons he wanted a Jeep was the ability to discover new areas and spend time outside, so immediately the first modification would be an upgrade to the stock suspension. He looked to BDS Suspension and their 4.5-inch lift kit paired with new Fox shocks to tackle the terrain. A BDS dual steering stabilizer helps improve the steering and handling, while a Steer Smarts Yeti XD adjustable front track bar was added to help keep the ride comfortable after the lift, as it is designed to correct the track bar geometry. 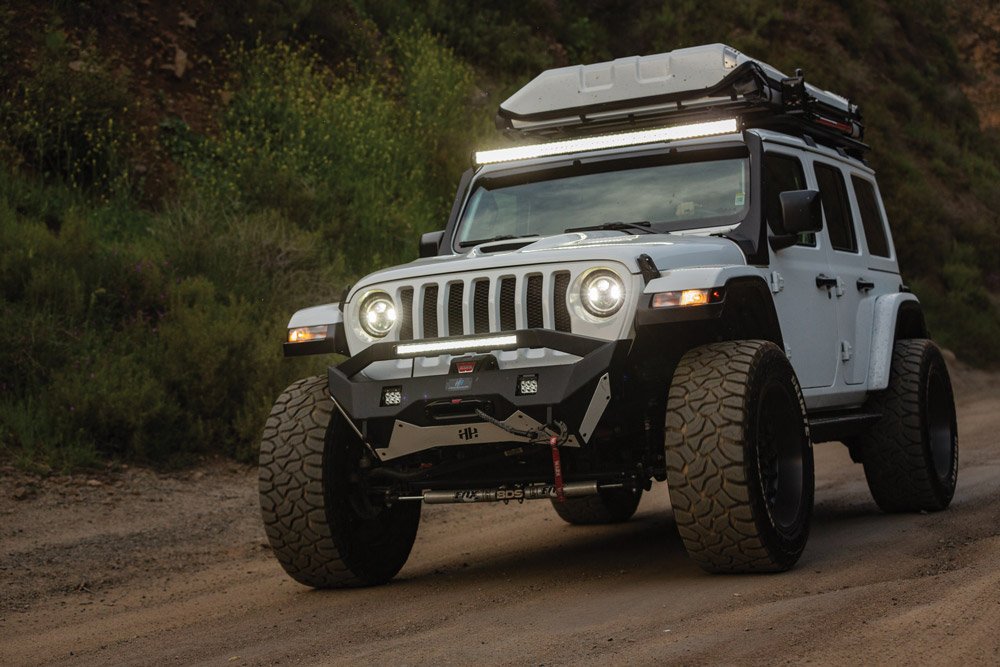 Being employed at TSW Tires has its perks; he had the opportunity to select from an assortment of wheel styles and decided on 22×11.5 Black Rhino Fury wheels in matte gunmetal. Having made a few friends within the auto industry, he reached out to a friend at Delinte Tires and let him know that he took possession of the new Jeep. The timing was perfect as they were in need of a vehicle to showcase at SEMA that year. After outfitting the Jeep Wrangler with Delinte DX12 R/T Bandit Tires in 22×13.5, the decision was made to go all out and build his ultimate rig to unveil it at SEMA only a few weeks away.

See more of this Jeep. 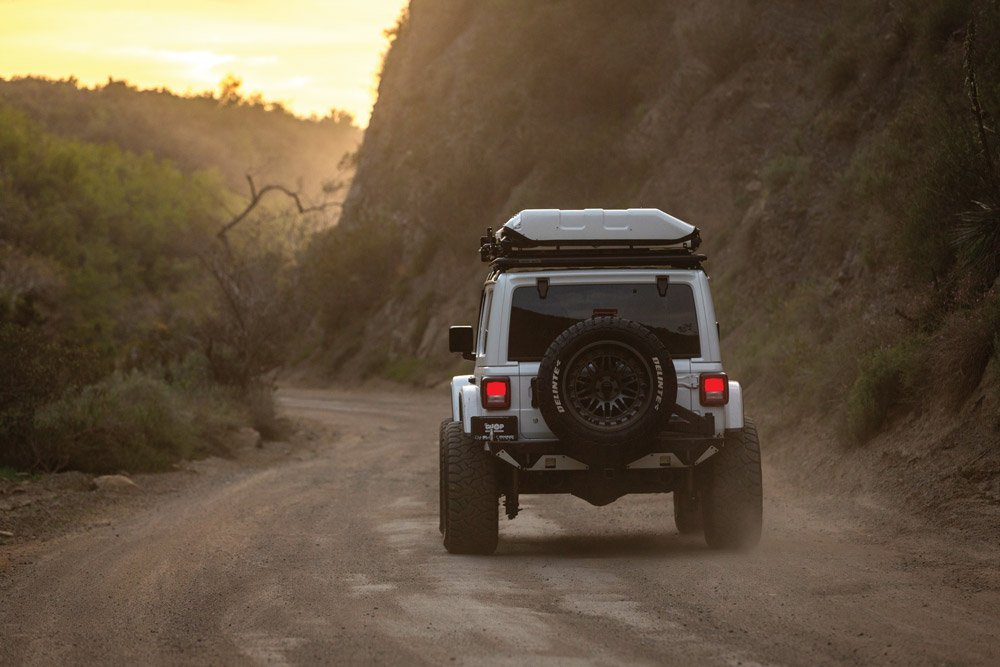 Rubio turned to The Shop OC to help him meet his extremely tight deadline. The next modification would be both for looks as well as protection. Hammerhead supplied the project with a front bumper, rear bumper, and side steps, which he had the accent plates painted to match the white factory paint. The heavy-duty front bumper is built to protect the vehicle from damage and punishment that may occur during the various outings, and it is also winch capable. 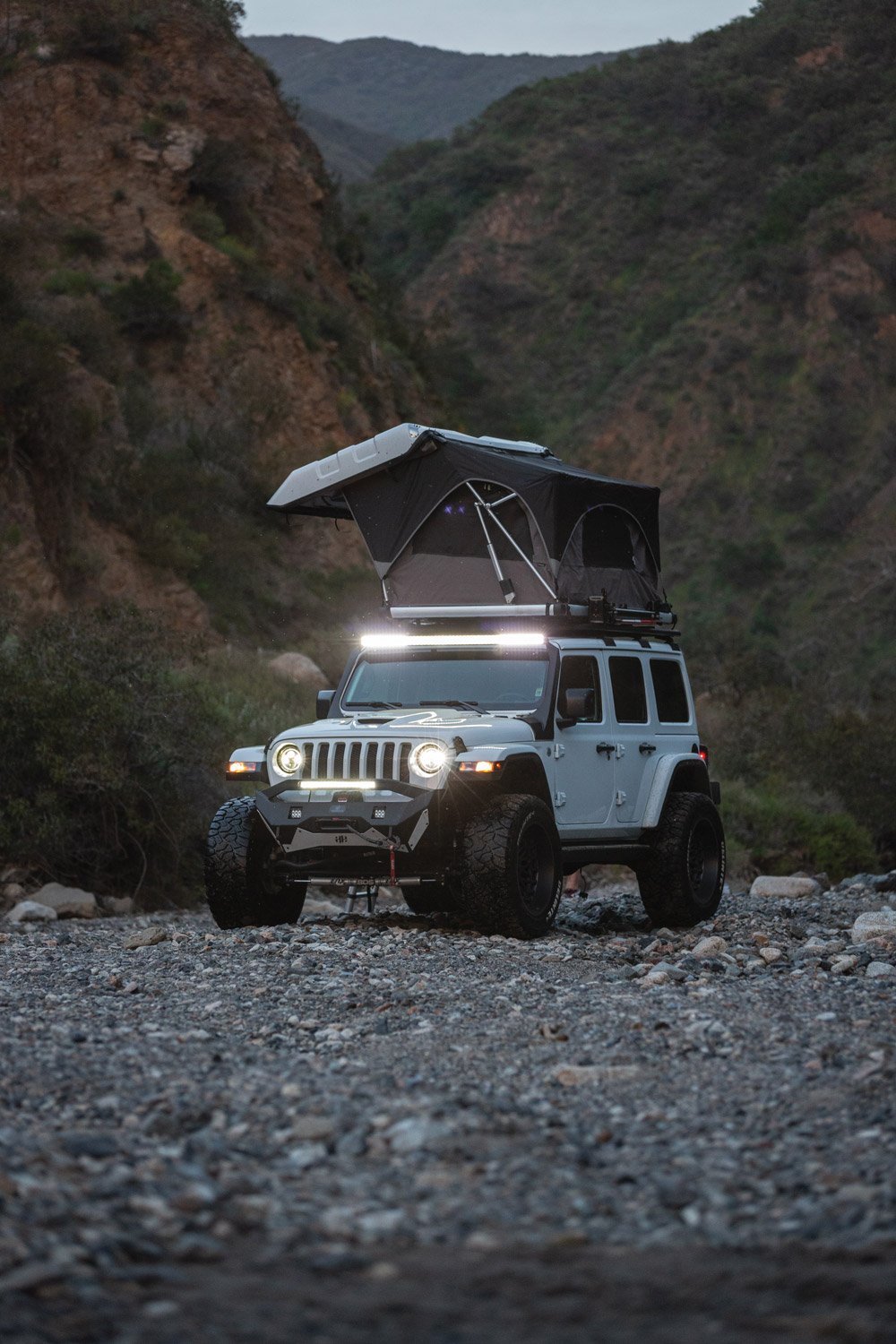 A Warn winch was installed for recovery purposes. In fact, the winch came in handy during the shoot of this vehicle as a stock Tacoma we came across had been high centered. Rubio came to the rescue and pulled the truck back to safety.

“Rubio was happy with the results, especially after such a quick build time frame …”

“No matter where I end up or how long it takes me to get there, I know that I have all the tools of the trade to get me through the expedition.”

An all-white Stormtrooper theme would go into effect to help the Jeep stand out at the massive convention. The Shop OC had the carbon-fiber Extreme Dimensions Hellcat Hood painted to match the exterior along with the shell of his electric roof top tent from Freespirit Recreation, which he had to disassemble for the paint booth. This proved to be a challenge, but well worth the extra effort. 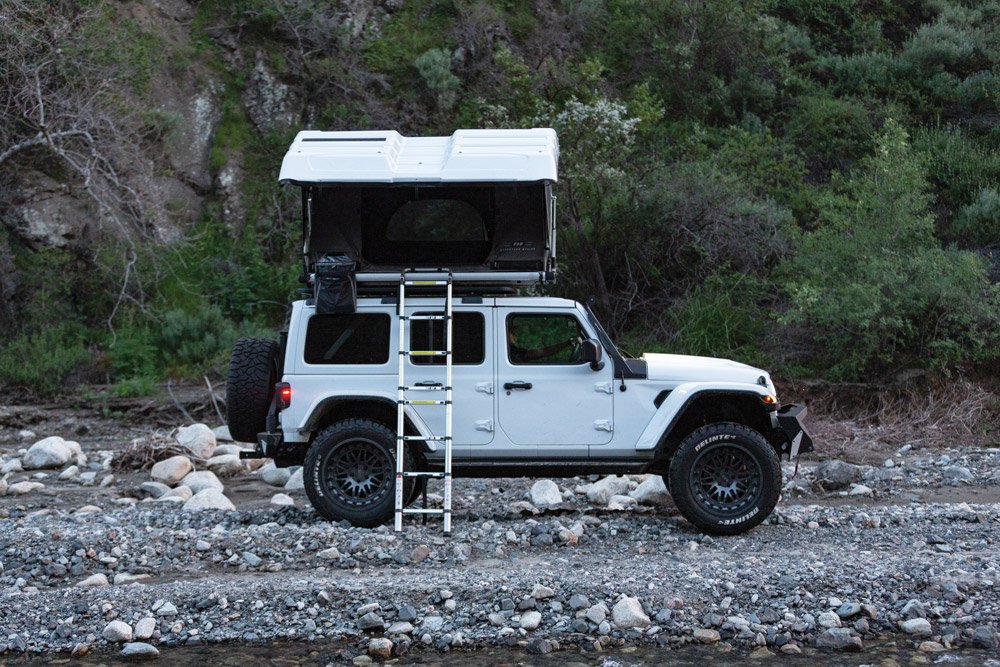 Both the carbon fiber Extreme Dimensions Hellcat Hood and shell for the Freespirit Recreation roof top tent were painted to match the Jeep Wrangler’s exterior.

He chose the electric Freespirit Recreation RTT for the ease and speed that it takes to set up and the opportunity it provided to sleep under the stars, rather than in overpriced hotel rooms that would take him away from the trails.

“Avec light bars on the roof and bumper light the way when the sun goes down.”

“It’s all about the journey, not the destination. A quote I’ve heard many times, but not a concept I really understood until I joined the Overlanding scene. Overlanding gave me the ability to explore different areas near and far, on my own pace, all while having the necessary resources for overnight stays located just on the roof of my Jeep JL.”

He soon came to realize that his adventures would require more modifications and he elected to install a K&N intake paired with a MagnaFlow exhaust to improve the performance and free up some power from the engine. 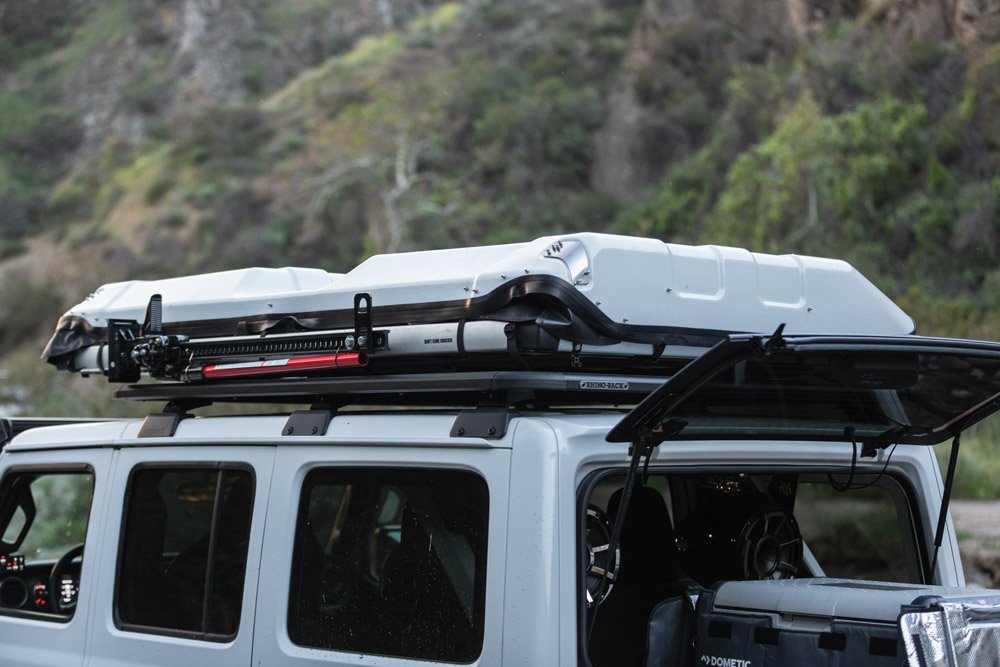 His overnight trips and remote area exploration would require more powerful lighting. So he had installed an Avec light bar on the roof and an Avec bumper light bar for visibility in the dark. He also upgraded his headlights with Quake LED headlights to ensure his daily nighttime driving had extra visibility for safer drives.

The main purpose of his build would be for recreational activities, such as camping, trips to the beach, and for tailgating. He installed a Dometic compact refrigerator and a Coleman camp stove on a custom retractable tray system built by MG Audio Design in Anaheim to keep his drinks and food cold and have the option of cooking on the spot. The sliding tray system makes it convenient to access the fridge and pull out the stove.

He also installed a ViAir high-speed Jeep JK Bolt-on system that includes two high-output compressors mounted to a 2.0 gallon, five-port air tank to air his tires back after deflating to get more grip on rocky roads, place air in his mountain bike tires, and also has his Hornblaster attached.

“The couple began to enjoy their new surroundings and their explorations would lead them further and further off the beaten path.” 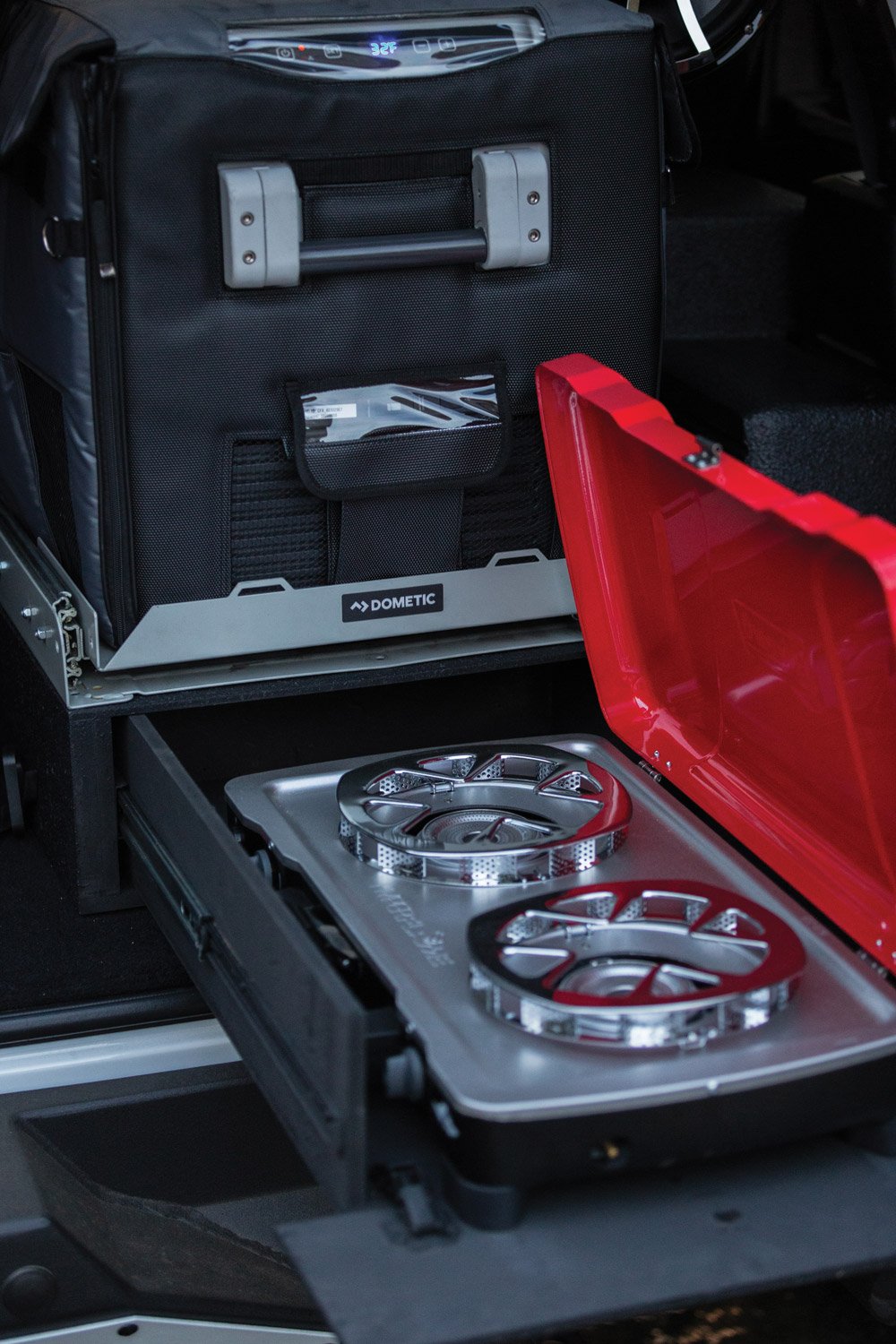 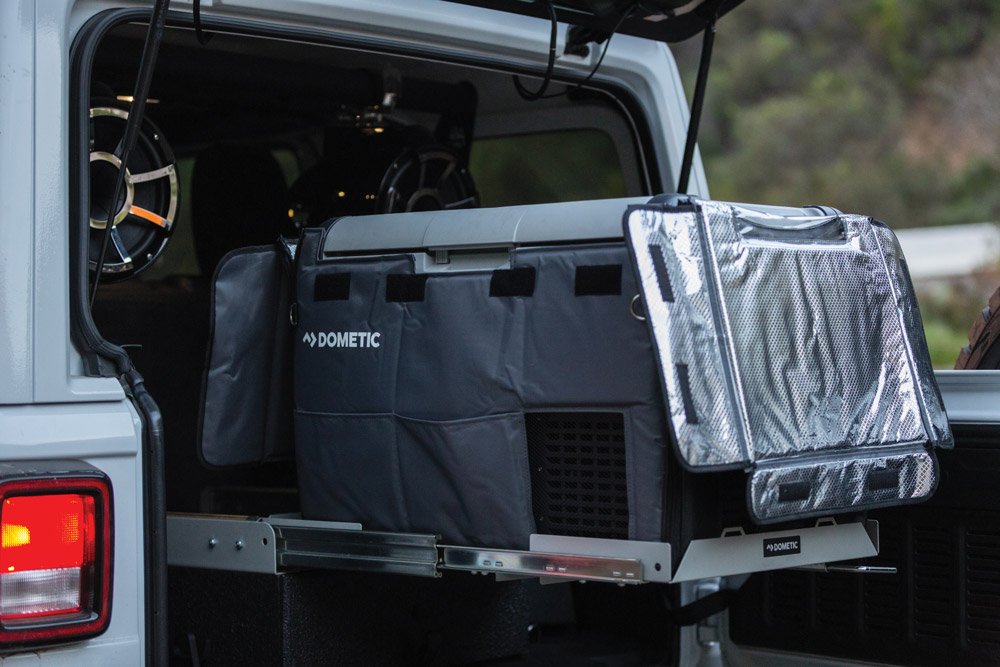 A Dometic compact refrigerator and a Coleman camp stove on a custom retractable tray system, built by MG Audio Design, pull out to form an easy to set up kitchen system.

For entertainment, he required a hard-hitting and bass-heavy sound system ­— after all he is from Miami. He had a full Wet Sounds system installed including two 1,400-watt amps, four 6.5-inch coaxial speakers, a pair of 6.5-inch speakers in a custom box, and two 10-inch subwoofers for extra bass built inside a custom enclosure. Two large Rev 10 tower speakers were installed to his rollbar to complete the sound system. An Optima YellowTop battery replaced the factory battery to handle the extra requirements of the sound system. 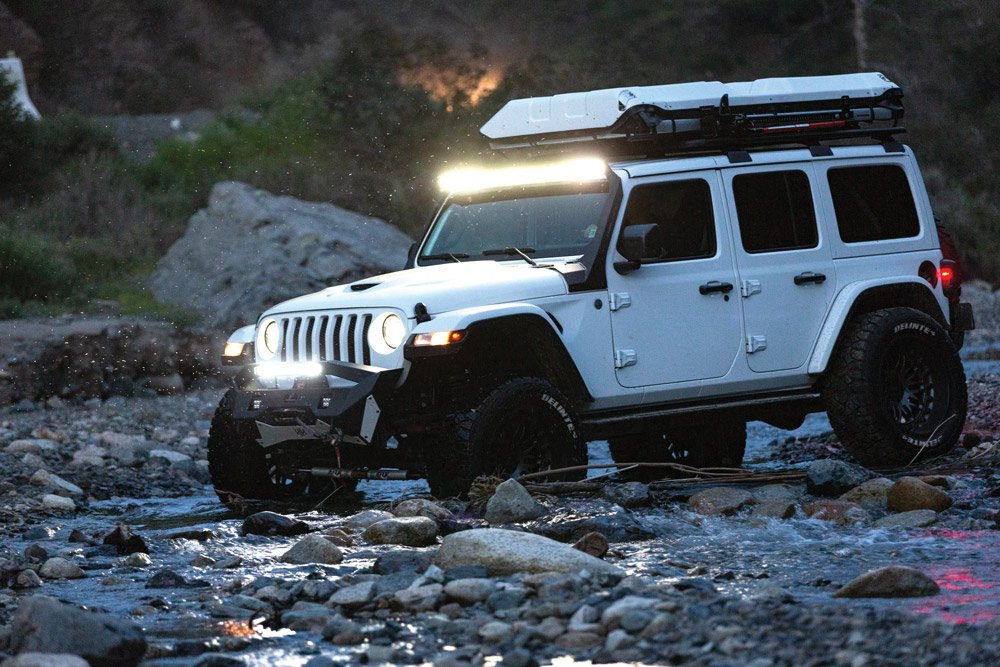 The main purpose of his build would be for recreational activities such as camping, trips to the beach, and for tailgating.

For daily driving and longer trips, Rubio installed a pair of Corbeau Trail Cat seats for extra comfort as well as the low thigh bolsters make it easier to get in and out of the lifted Jeep Wrangler, while still preventing shifting during the drive.

“… for Florida transplant Rafael Rubio, living in California provided an opportunity to satisfy his urge to travel and explore.”

The Jeep Wrangler made its debut at SEMA and was well received. Rubio was happy with the results, especially after such a quick build time frame and was excited to put the Jeep Wrangler to the test. Immediately following the show, the couple made their first trip by taking a detour to Big Bear on the way home from the weeklong convention to enjoy the completed project vehicle and test it in the outdoors. Since then, the longest trip for the couple was a short excursion to Yosemite, in which they promised to return to soon. For now, the Jeep has become an extension of their home in California, providing all the comforts they require and giving them the ability to escape and explore as their heart desires. 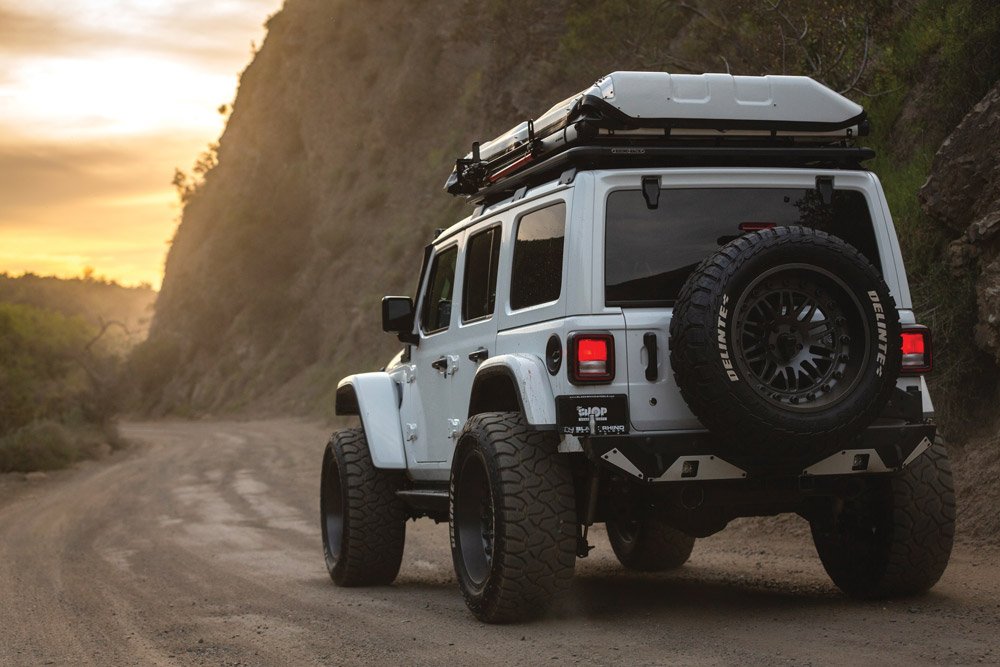