It took Thomas Tucker about 2½ years to build and evolve this 2018 Jeep Wrangler to what it is today; and he’s quite happy with it … for now. With 55,000 miles on the clock through more than 13 countries (about half of that traveling off-pavement), this Jeep is dialed in and ready for more adventures, and ready for more Tents + Treads gatherings.

“ … COVID happened, and events of all types died down, so the in-person Tents + Treads gatherings have been on hold during the pandemic.” 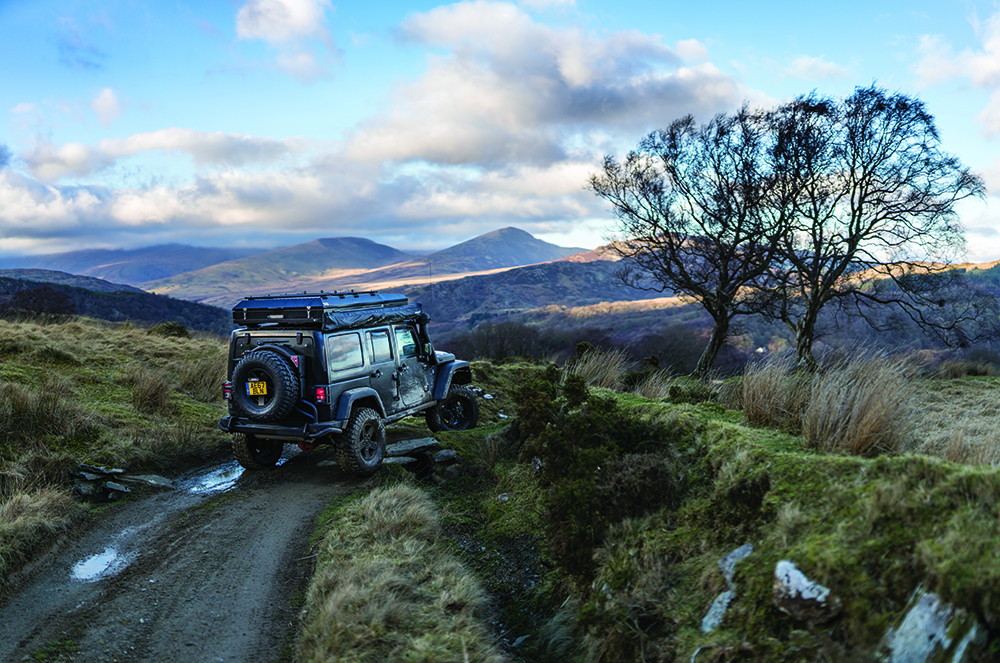 Leaving camp and taking in the sights on a trail in Snowdonia National Park, Wales

Tucker has spent the past nine years on overseas duty with the U.S. Air Force. In late 2017, he used some deployment funds to buy this Jeep and had it shipped directly to his station in England at the time. He’s since spent a lot more deployment money upgrading this overland machine and dialing it in for his style of travel. In fact, he’s gone through three RTTs, multiple front bumpers and four stoves and is on his third drawer system. Clearly, he likes to test and fine-tune his systems. 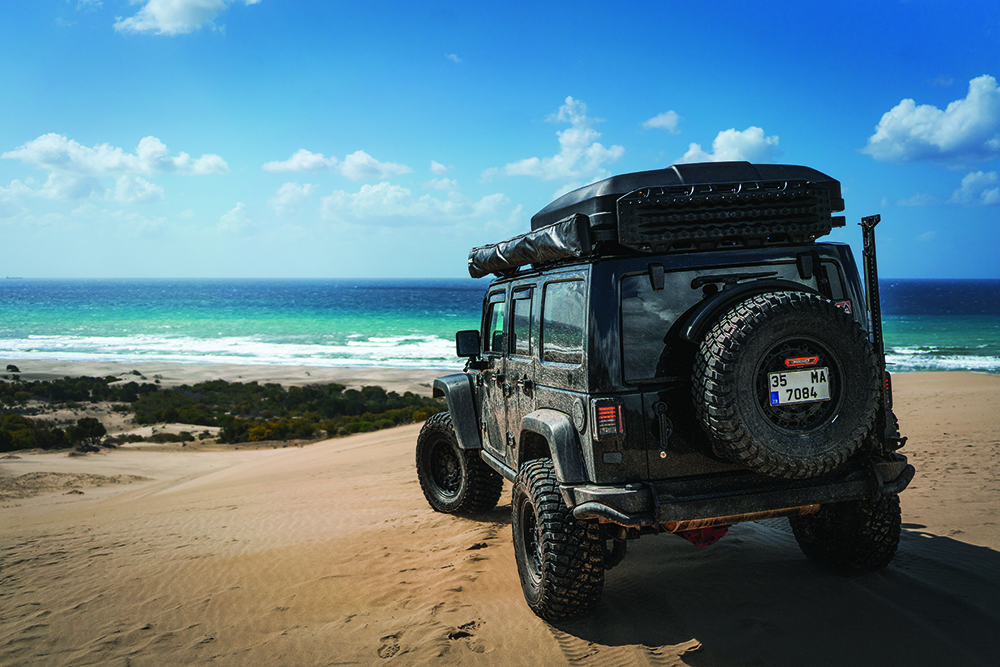 Tucker and his wife soak in the dunes and sunshine during a two-week camping trip down the western coast of Turkey.

The first mods to this Jeep were a roof rack and RTT. Tucker then embarked on a variety of trips all over Scotland and England. A 500-mile trip to the northern tip of Scotland over two weeks solidified Tucker’s passion for 4×4-vehicle-based overland travel.

“ … Because Tucker is now stateside, he plans to start up the gatherings here, in the United States, while his other friends/founders reinvigorate what they started in England and Italy.” 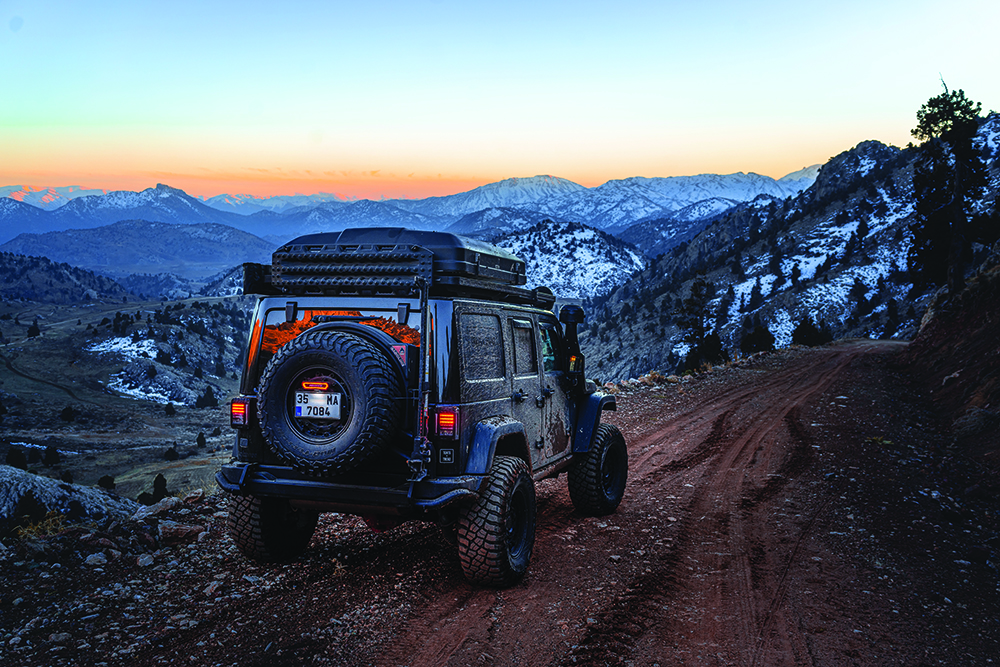 After catching the overland bug in the U.K., Tucker set his sights on some even bigger adventures across Europe. First up was a 10-day winter blitz across France to see Mont Blanc, through Switzerland to see the Matterhorn and Grindelwald, and then through Germany, Austria, Italy and about five other countries. Tucker wild-camped in the Jeep the entire trip, even through harsh winter conditions, as he refined his vehicle systems for even bigger adventures on the horizon. 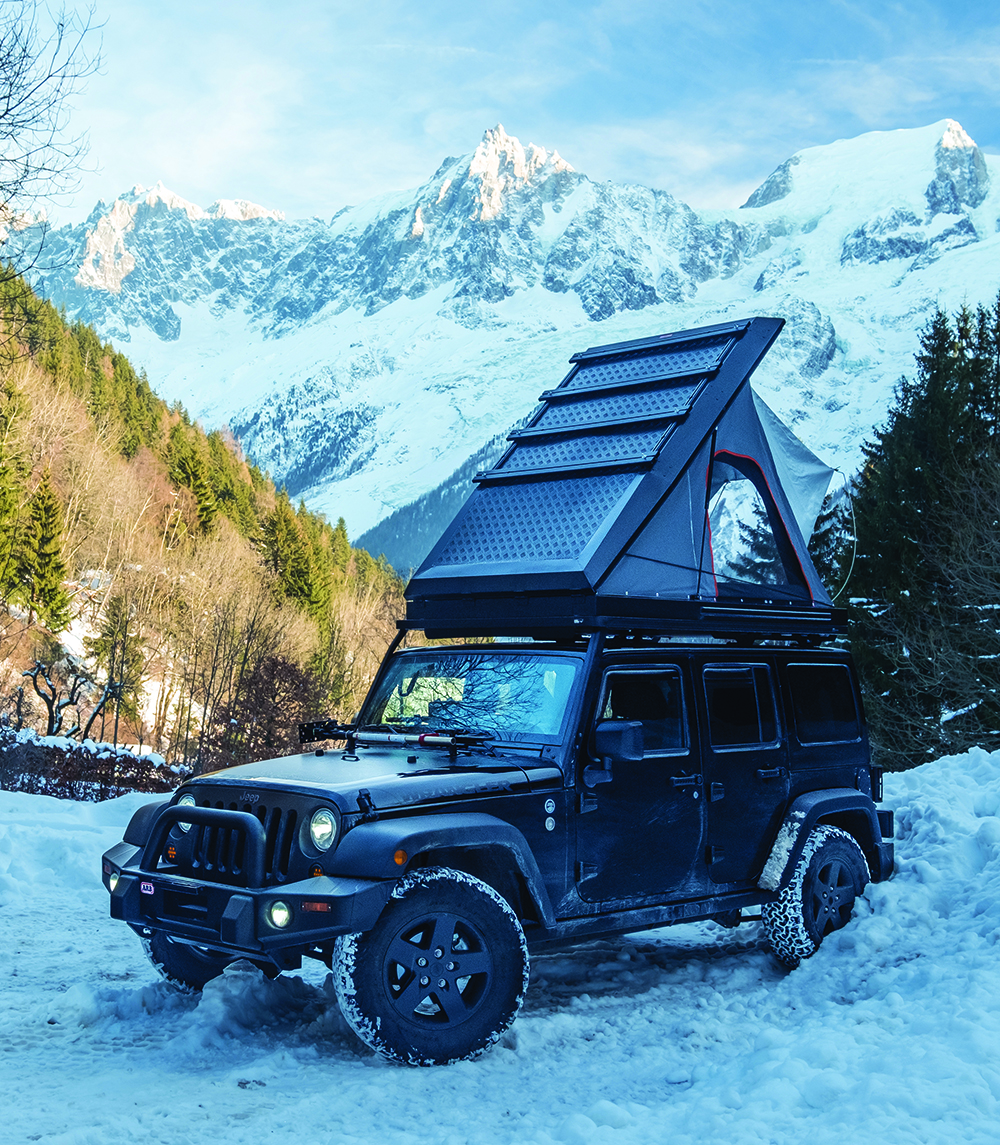 Next up was a 4.5-inch lift and 35-inch tires as Tucker set his sights on more-aggressive terrain. A month-long summertime trip with family and friends, taking on the big, off-road trails through the Alps and Pyrenees, proved that the additional ground clearance and tires were good investments.

The trip ended by crossing Spain from east to west—mostly off-road. Wild-camping again for this entire trip and still being stoked after a month in the Jeep let Tucker know that the overland lifestyle was something he was going to pursue even more. 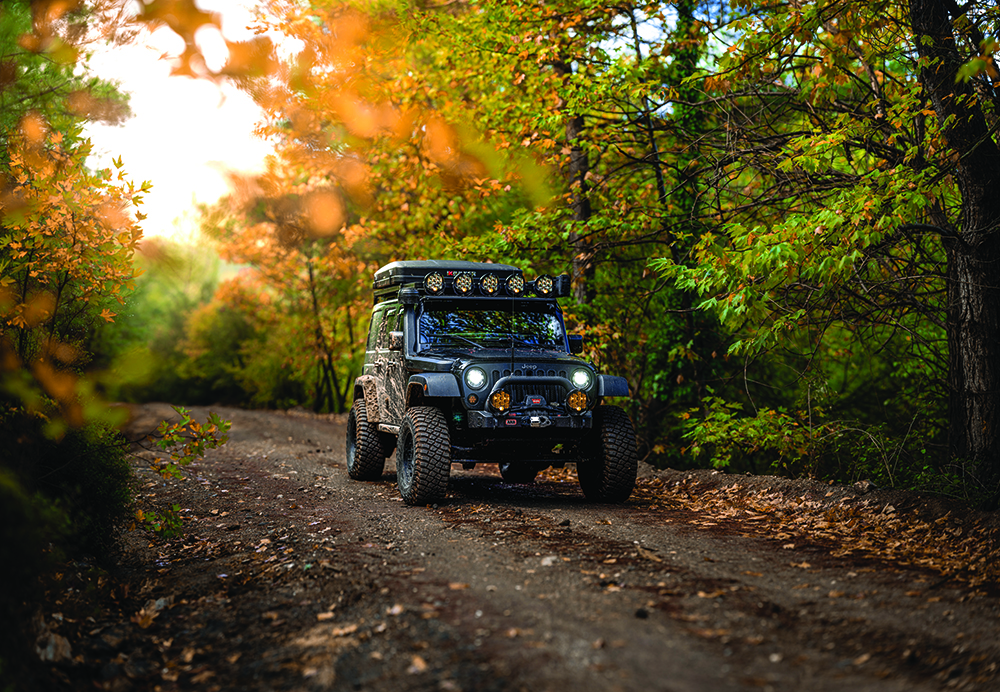 Rushing through trails across Izmir Province in Turkey in the autumn

Next up was getting a bit more organized in the Jeep by way of a rear seat delete and custom drawer system. This new setup was tested with weekend trips to nearly every off-road trail on offer in the U.K. and attending the massive Abenteuer Allrad overland show in Germany.

At the overland show and similar smaller and much-less-organized parking lot car gatherings, Tucker and his friends found that they weren’t loving the contrived urban locations and the focus on products. Instead, they wanted to hang out with those like-minded people in more-remote wild-camp spots and tackle off-road trails together. From this idea, they founded Tents + Tread. 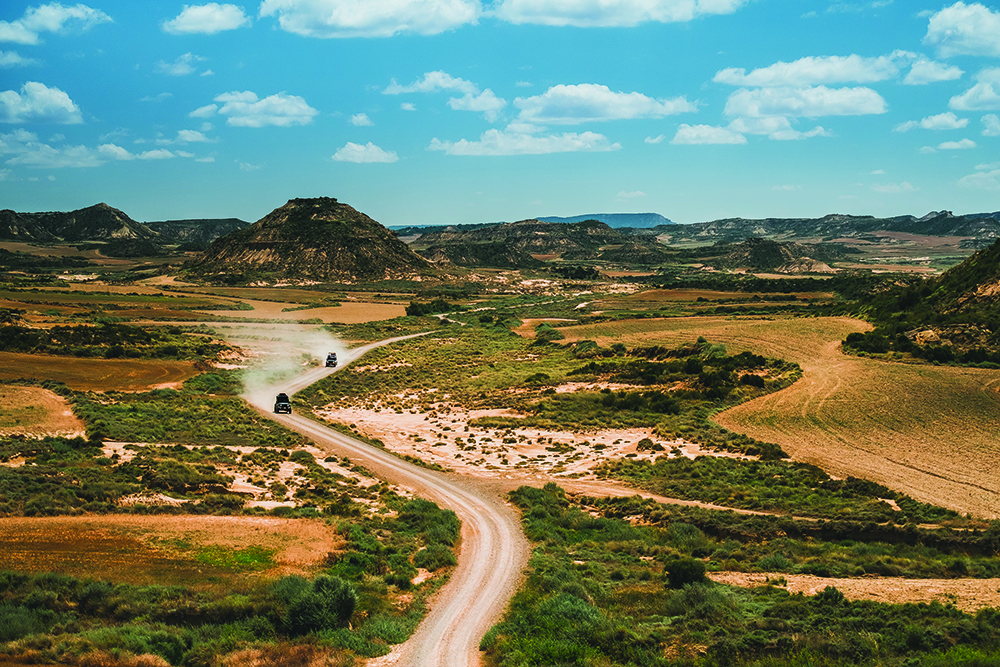 Tucker’s Jeep and a Defender 110 zip through the Spanish Bardenas Reales area.

Tents + Tread is “a collective for all who enjoy the outdoors to share, plot, engineer and pass on their expertise,” according to Tucker. The group has no fees and is inclusive of all vehicle makes and models and people from all corners of the globe. The idea is to offer an international community of like-minded adventurers and local meet-ups at cool adventure locations.

“After Catching the overland bug in the U.K., Tucker set his sights on some even bigger adventures across Europe.” The collective has gotten some traction, and even on a typically wet, miserable English weekend, it can attract about 40 vehicles and 70 adventurers.

Tucker saved up some funds from a deployment in Africa and added a bunch of finishing touches to his Jeep, including a plethora of Baja Designs’ off-road lights, an ARB fridge, Maxtrax, Rhino Rack batwing awning and more. All these upgrades were in preparation for two months on the road, the first month of which was guiding seven trucks in Morocco over a 2,500-mile route. The second month was devoted to exploring the off-road terrain in Slovenia through to Turkey, where he was now based for work. 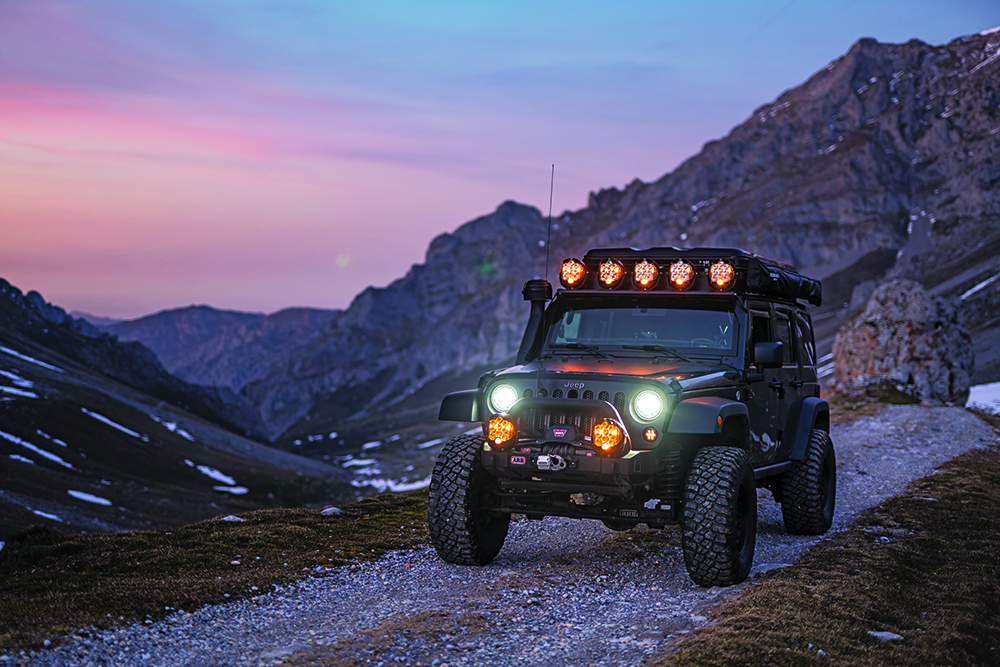 After taking the ferry to Spain in early March 2020 on his way to Morocco, Tucker camped out in the remote Picos de Europa, where there was no cell service. Exiting the trail the next day, his phone was full of messages. The world had changed overnight: COVID had locked down borders across Europe. So, instead of guiding in Morocco, Tucker began a five-month journey around Europe while living out of his Jeep. 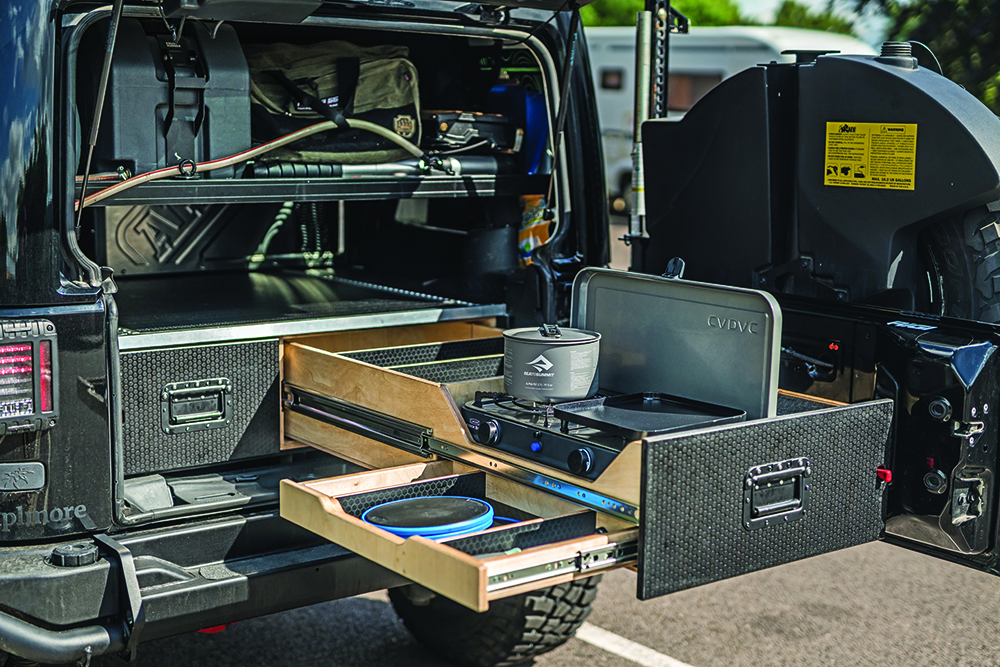 The third iteration of the sleep platform/ drawer system was fitted into the rear of Tucker’s JK—complete with a cooker.

Eventually, Tucker returned to his duty station in England, because COVID restrictions wouldn’t allow him to proceed by road to his final European duty station in Turkey. He then flew from England to Turkey and shipped the Jeep there.

Over the next year, Tucker filled his time when he wasn’t working by exploring the remote tracks up and down the Aegean and Mediterranean coasts of Turkey. He explained that Turkey is full of amazing people, great off-road trails, impressive historical sights and is a favorable place to travel on the U.S. dollar. 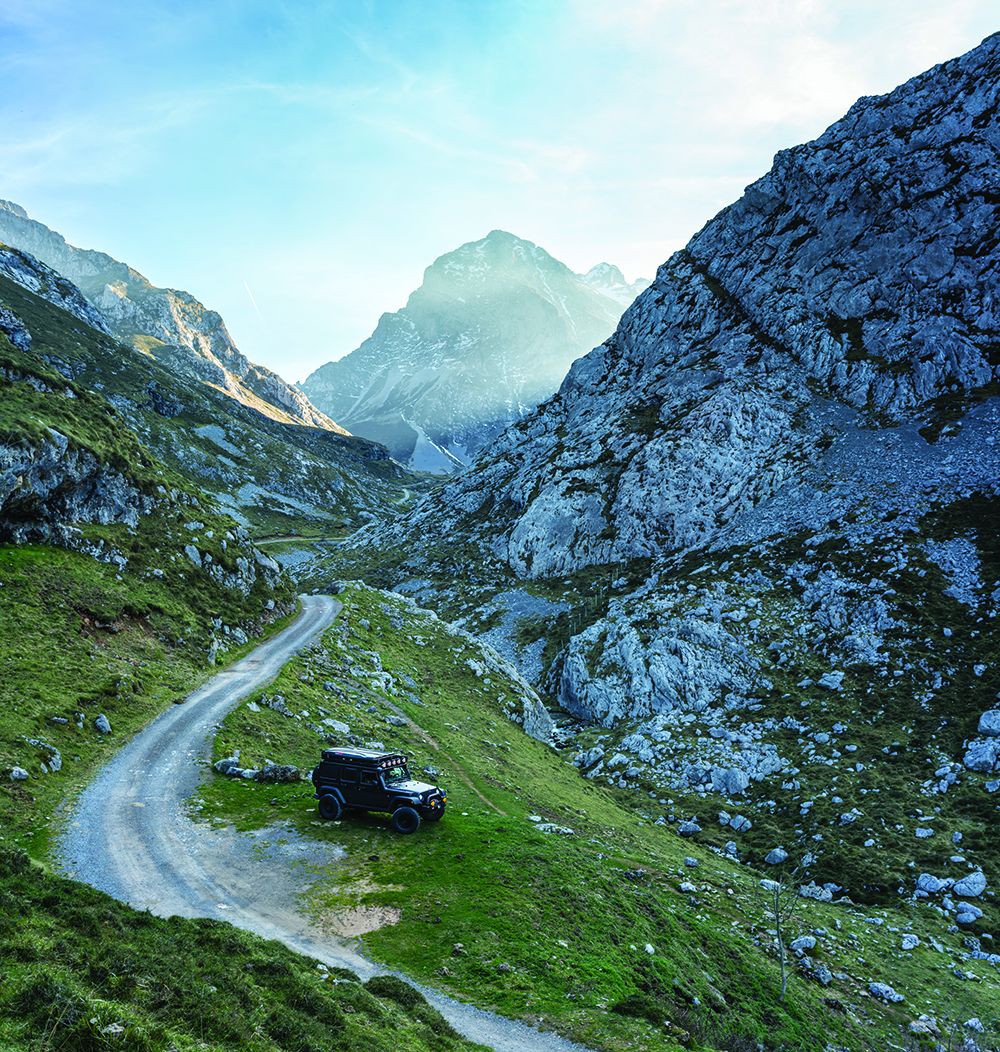 To Jeep or Not to Jeep

Having recently returned home to the United States from his overseas assignments, Tucker is excited about what’s next. One big thing for him and his wife: They’re expecting a baby this coming winter. What that means for his beloved overland Jeep is either some more modifications … or finding it a new owner.

If Tucker keeps the Jeep, he’ll have to re-add a rear seat, along with a Goose Gear drawer/platform system. He’d also add some solar panels, rock rails, skid plates, an extended-range fuel tank and some updated comms gear.

wild-camping again for this entire trip and still being stoked after a month in the Jeep let Tucker know that the overland lifestyle was something he was going to pursue even more. Tucker and his wife chase sunsets across Cesme’s beaches along Turkey’s Aegean coast.

Because there’s a hot market for used vehicles right now, Tucker is also tempted to sell his Jeep and build a slightly bigger, family-friendly adventure vehicle. His first choice would be a Gladiator with a PCOR flatbed setup. Another option could be a new Bronco—although he’s worried about the Bronco’s width and being able to fit down the international trails he likes to travel. And, the year-long-plus wait to get a new Bronco isn’t exactly appealing either. A fantastic camping weekend with his then-girlfriend (now wife), Hannah, in the English Lake District

Whatever vehicle Tucker ends up within the next year, he’s sure to set out on some overland adventures with his growing family. He’s got plans in the works for Iceland, Alaska and/or Central America. Obviously, work, family, politics and pandemics will influence the direction in which he points his overland rig in 2022.

Of course, COVID happened, and events of all types died down, so the in-person Tents + Treads gatherings have been on hold during the pandemic. However, because Tucker is now stateside, he plans to start up the gatherings here, in the United States, while his other friends/founders reinvigorate what they started in England and Italy.

“Whatever vehicle Tucker ends up within the next year, he’s sure to set out on some overland adventures with his growing family.” Thomas Tucker and his wife, Hannah, enjoy a weekend away, camping with friends in the English Peak District.

Check out TentsAndTread.com to become a part of the collective and possibly catch up with Tucker at a remote campsite gathering soon.