This beautiful 1985 Land Cruiser Troopy has lived a hard life, but has been given a new lease through Martin Reginato’s passion for well-sorted overland vehicles. Debuting at the 2019 SEMA Show, Reginato turned heads with this eye-catching rig in the iKamper booth. It goes to show how a passion for building off-road vehicles shines through in impressive work over the years, as Reginato has exemplified.

“With only 10 days to get it to the show, Reginato’s friends and family rallied to get the Troopy worthy of being displayed.”

Reginato runs a property management company—a family endeavor—and a 3-D mapping and drone photography business in Salt Lake City. He says that he does “lots of off-road adventures alone, and with my kids, so I look for vehicles that are unique and super capable to take me to impossible places and be able to bring me back home safely.” Reginato developed a passion for remote, off-road adventures as a teenager growing up in the mountain town of San Carlos de Bariloche, Argentina. This lakeside mountain town in the middle of Patagonia is full of Land Rover Defenders, Mitsubishi Monteros, and Toyota Land Cruisers. Those pinnacle vehicles were out of reach of Reginato’s budget growing up, but that didn’t slow him down.

His first adventuremobile was a Citroen Furgoneta 3CV. This little front-wheel-drive car that was used like a truck by most, was designed and built after World War II in Germany. It was rugged, easy to fix, and dependable. Reginato says that it was able to take him to the tops of mountains and cross 4-foot-deep rivers. His passion for off-road vehicles was truly solidified by his “beloved Citroneta.” 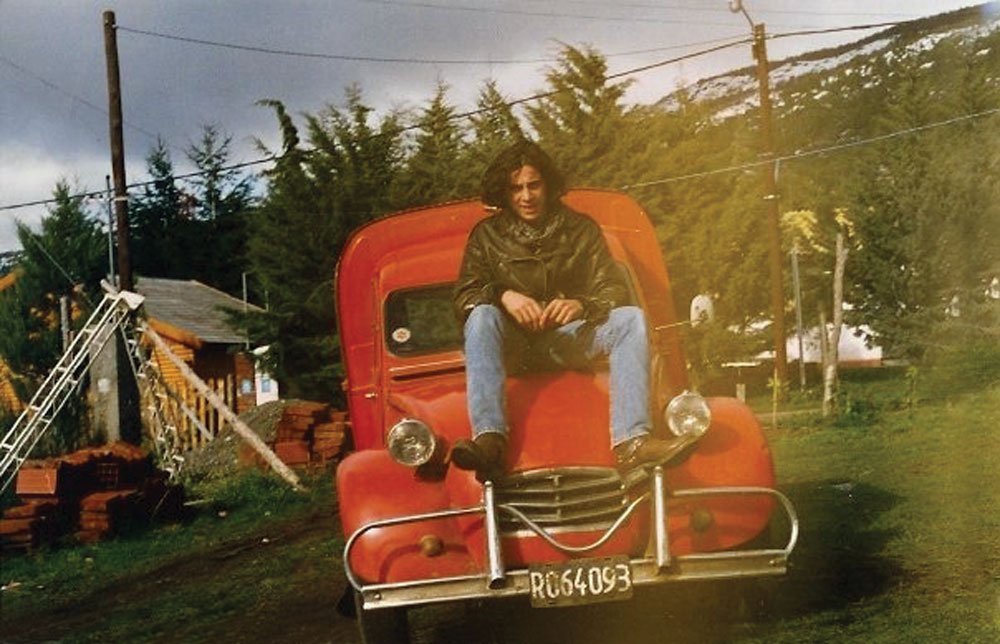 A young Reginato with his “beloved Citroneta” (Citroen Furgoneta 3CV) in Argentina.

Reginato has owned a wide range of off-road machinery since then, including several Toyotas. One of the most memorable is a Bandeirante OJ55 that he imported from Brazil into the U.S. after moving here in 1998. The Bandeirante OJ55 is essentially a Toyota Land Cruiser 40 series single-cab pickup made in Brazil for the South American market. He fixed it up and gave that old pickup his personal touch.

“This beautiful 1985 Land Cruiser Troopy has lived a hard life, but has been given a new lease through Martin Reginato’s passion for well-sorted overland vehicles.”

The old truck sold the very same day this Troopy came up for sale. Reginato sent his friend Jared, from Planet Sales Toys, to buy it that day in Miami. He then sent his friend Flub that same day to drive it back to Utah for him. Reginato says that when it arrived he “was in love; a tear dropped when I saw it.” 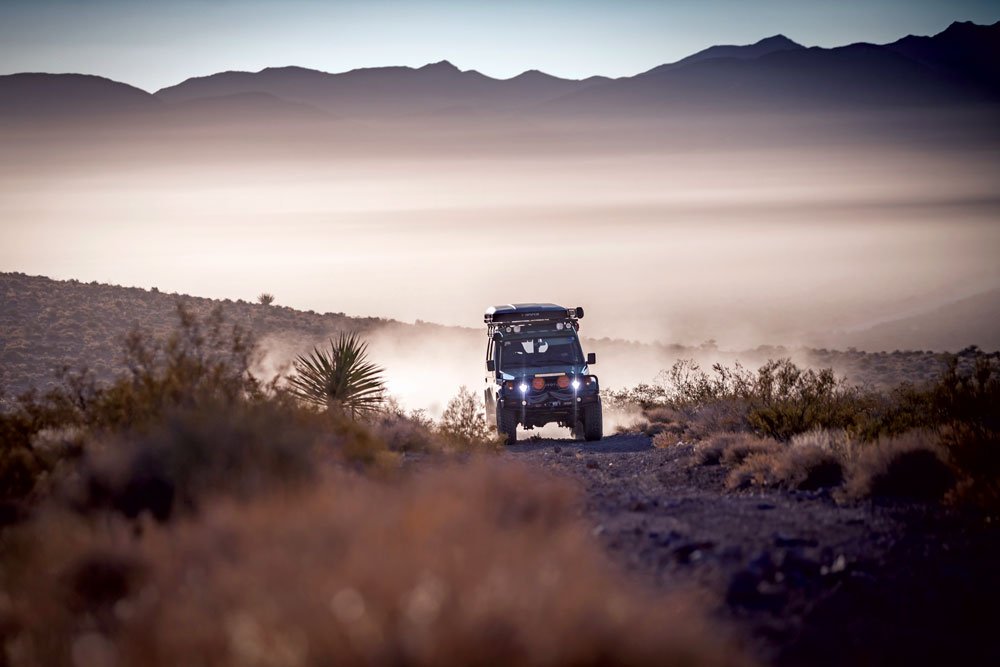 This Troopy has been built for remote, off-road, overland adventures. 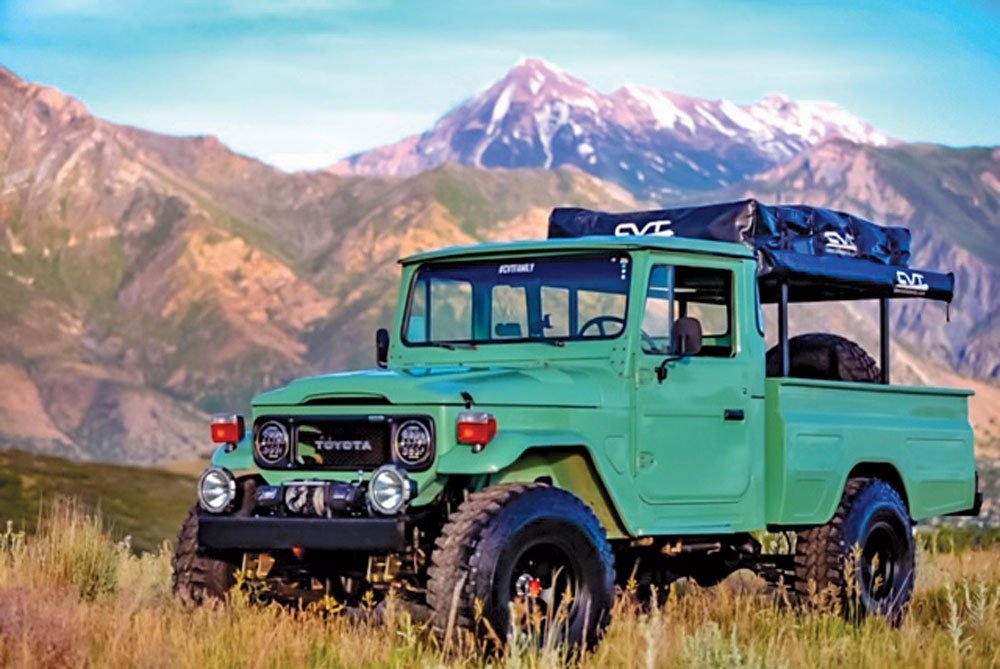 Brazilian Bandeirante OJ55 that Reginato imported into the U.S. in 1998 and gave his special touch.

This Troopy was in rough shape when it finally arrived in Utah. It needed a full overhaul from top to bottom. While the paint looked good from far away, even it was a poorly done respray. Luckily Reginato’s brother-in-law, Daniel, from Unique Body Shop, was able to fix the paint issue with this deep olive green paintjob.

With the help of Dustin from State Automotive and Kurt from Cruiser Outfitters, Reginato was able to get all the pieces and work done to give this old Land Cruiser a new life. It took over a year to get everything put together properly, as it was an extensive refurbishment.

Some engine work, front end repair, and interior were just the beginning. The dual gas tanks were rebuilt and new fuel lines installed. A new radiator, carburetor, A/C system, and all-new brake system were also fitted. The carburetor alone took a full six months to dial in correctly on this Troopy.

Since the suspension was already shot and Reginato planned to use this truck off-road, an Old Man Emu 4-inch lift kit was installed. With the lift he was able to fit aggressive 35-inch BFGoodrich KM2 tires wrapped around 16-inch aluminum Pro Comp 69 wheels. 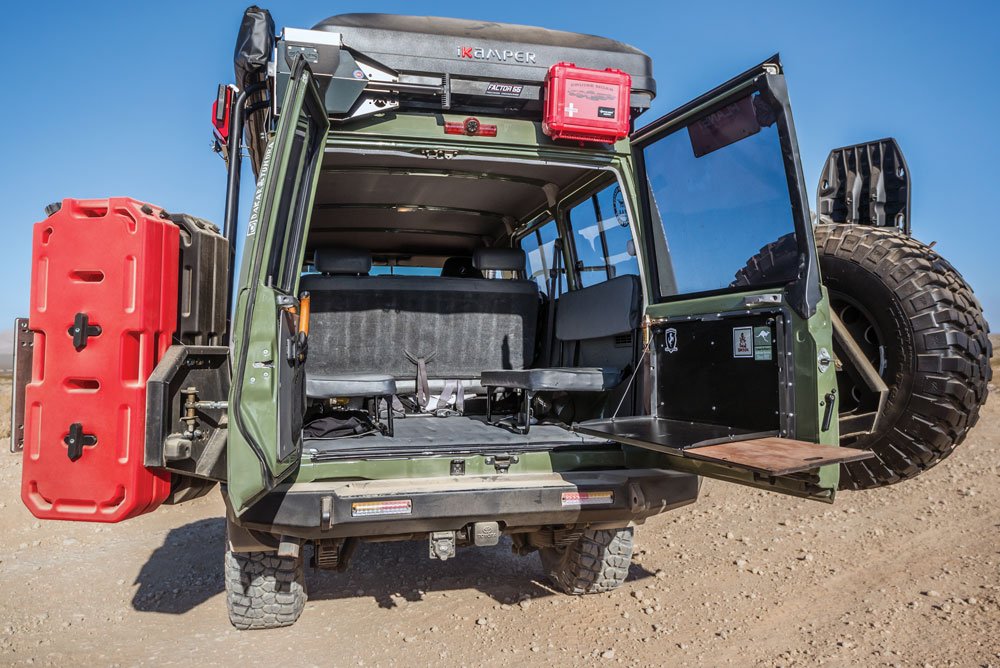 This Troopy is still set up to haul a lot of people, with rear jump seats still in place. Up front an ARB bull bar is well appointed with lighting and recovery gear.

Once the truck was running right and looking right, it was time to dial in some overland adventure upgrades. First up was a custom roof rack and rock sliders/side-steps, created by Dan Cressal. Welder and designer Noah Tayler then built a custom side ladder to more easily access the rack.

An ARB bull bar was fitted up front, along with a 12K Smittybilt winch, Factor55 UltraHook, and some Hard Korr lights. Out back a Cruiser Outfitters dual-swing-out rear bumper was fitted. It features a spare tire on one side and Expedition One Rotopax holder on the other. Also fitted to the spare tire are a set of Maxtrax and a Deadman Off Road recovery system.

While the inside of a Troopy is usually quite spartan, Reginato upgraded this one substantially with some top-quality Dynamat Dynaliner sound deadening throughout and a pair of super luxurious Corbeau Trailcat seats up front. A full Alpine audio system, with integrated accessory switching done by Alan at California Audio, rounds out the interior. 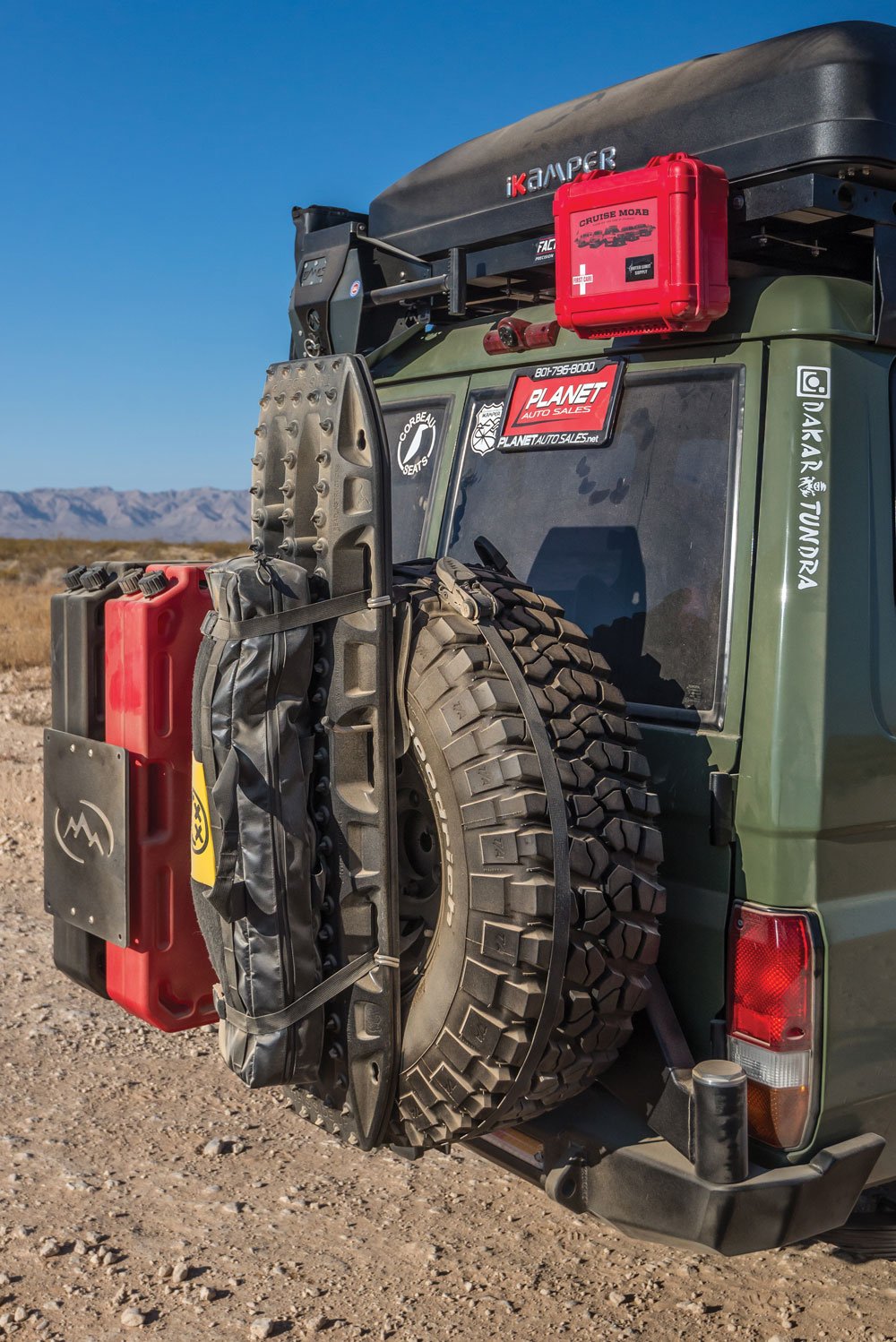 As Reginato dug through this truck he found a number plate on the dash that indicates that it was an ex-Peace Corp vehicle. The original paint on the vehicle was white as well. After some research he thinks that this Troopy was owned by the Peace Corp based at the U.S. embassy in Russia. While he hasn’t been able to fully verify this backstory, it is a fun one to go along with the vehicle. A clue as to this Troopy’s Peace Corp origins.

Less than two weeks before the 2019 SEMA Show, Reginato got a call from his friends at iKamper. They had been building a truck to display in their booth at the show that had a major engine failure. Without enough time to get it ready, they needed another eye-catching, impressive overland build to showcase their RTTs and get people into the booth.

“This Troopy was in rough shape when it finally arrived in Utah. It needed a full overhaul from top to bottom.”

Getting this Troopy show-ready was no easy task, as it was well used off-road and needed some serious TLC, including some more paintwork because of some serious pinstriping. With only 10 days to get it to the show, Reginato’s friends and family rallied to get the Troopy worthy of being displayed. As you can see from these photos, taken just after SEMA, the truck came out amazing.

“I took it off-road several times and to date it’s been the best off-roader I ever had—better than any newer truck or SUV. I think the simplicity, easy-to-fix, power, and gear ratio are the best. There is something in the simplicity that attracts me; maybe that’s the connection with my Citroen. Simple, reliable, dependable, strong, and lovable,” Reginato says. The 1FZ-F petrol 4.5L inline six-cylinder is the heart of this beast. 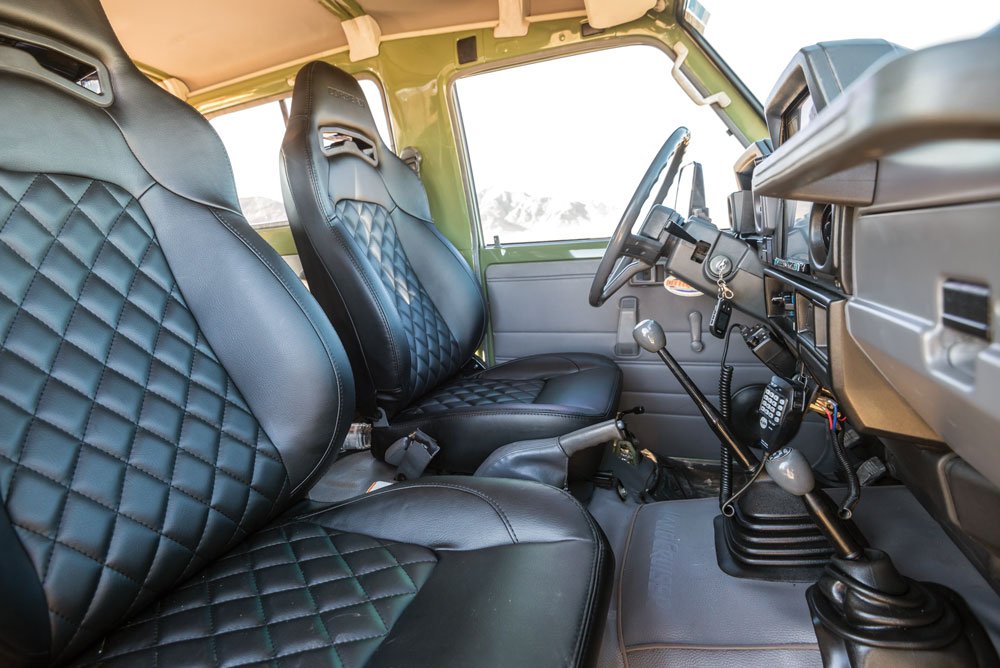 Comfortable Corbeau Trailcat seats are a huge upgrade over stock. 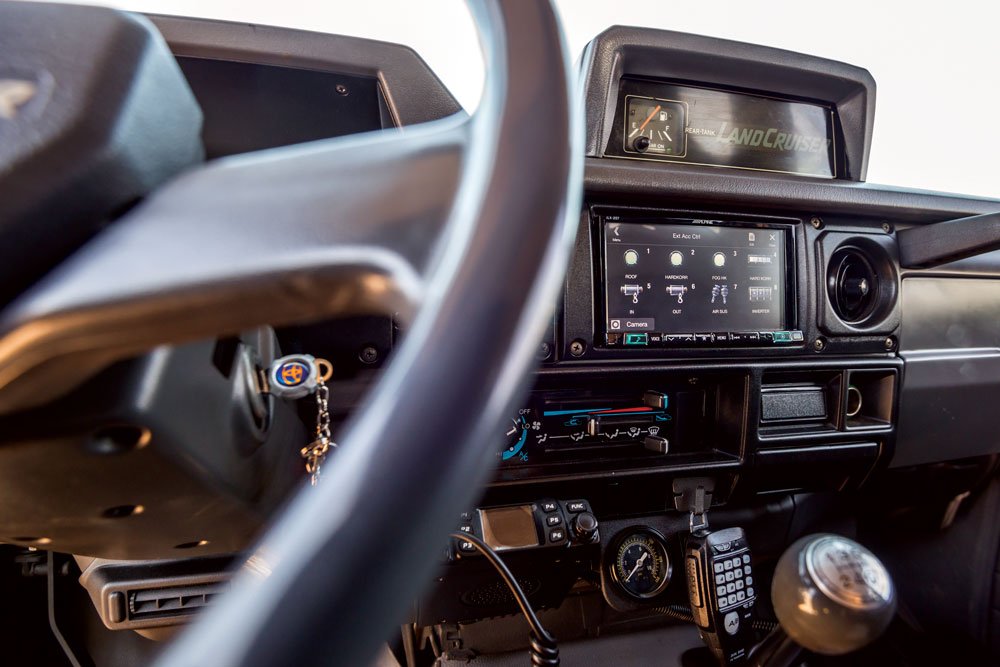 A full Alpine audio system, with integrated accessory switching rounds out the interior. 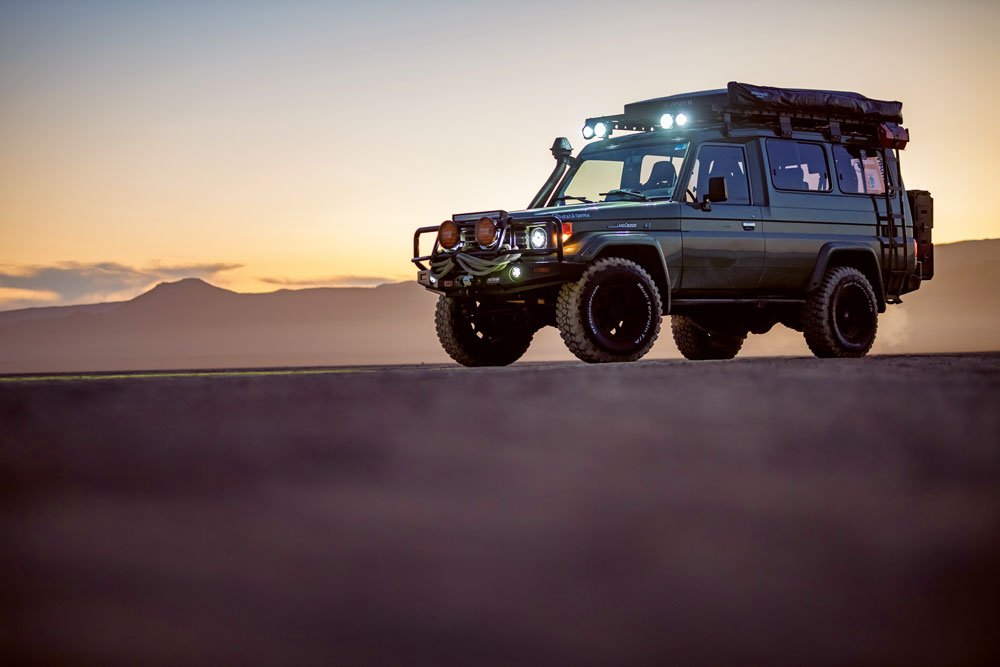 Night or day this Troopy is ready for adventure.

Soon after SEMA this beautiful Troopy moved onto a new caretaker. It is now roaming somewhere in the great state of Texas. Not to worry, however, as Reginato already has another Troopy project in the works, as well as a Defender 110 on the way, and continues to explore in his well-appointed Toyota Tundra.

“I took it off-road several times and to date it’s been the best off-roader I ever had—better than any newer truck or SUV. I think the simplicity, easy-to-fix, power, and gear ratio are the best. There is something in the simplicity that attracts me; maybe that’s the connection with my Citroen. Simple, reliable, dependable, strong, and lovable.” -Martin Reginato

The funds from the sale of this beautiful Troopy will go directly toward a big South American overland trip in 2021. Reginato plans to prepare two FJ40s in Brazil for the big adventure. Reginato is most looking forward to showing off his beloved Patagonia, where he grew up, to five of his close friends who will be on the adventure with him. Reginato would like to send a shout-out to all the amazing companies and people behind them who helped him put this build together. In particular: iKamper, Dead Man Offroad, Factor55, Hard Korr Lights, Corbeau Seats, Maxtrax, DMOS, Overland Bound, Rhino-Rack, Smitybuild, Expedition One, Cruiser Outfitters, Outer Limit Supply, Snomaster, and Hive Trailers. He also wants to send out a heartfelt thank you to his wife, Veronica; kids; and parents-in-law, James and Maria Dean, for all their help and support. 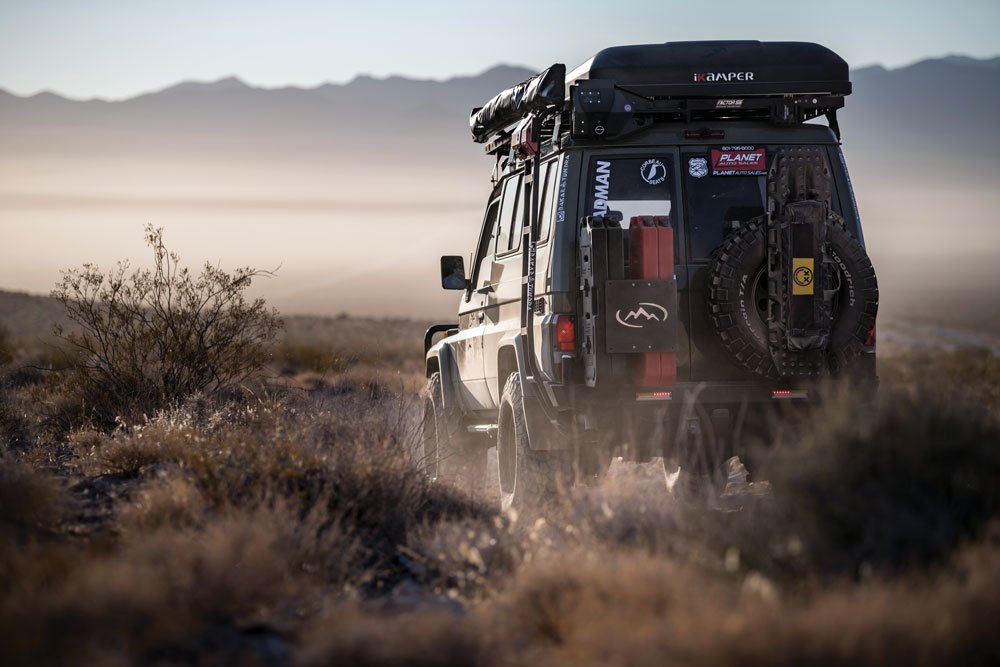 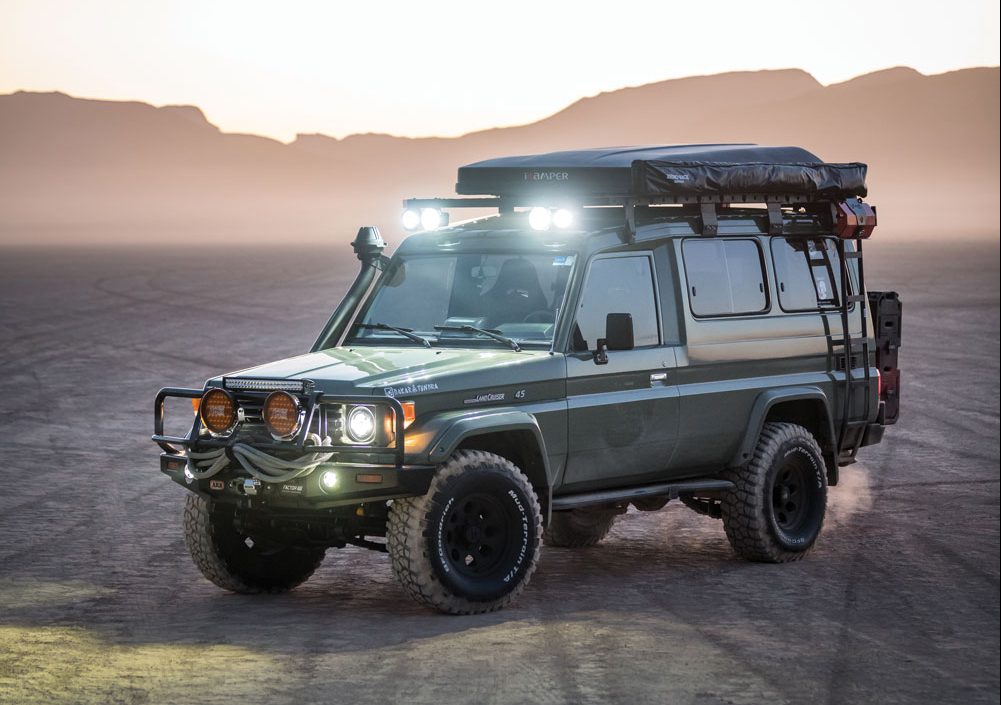