→ Submit your rig and win a Tread magazine feature of your truck! ←
Get the Magazine
Features, SUVs
Text and Photos by LINHBERGH NGUYEN 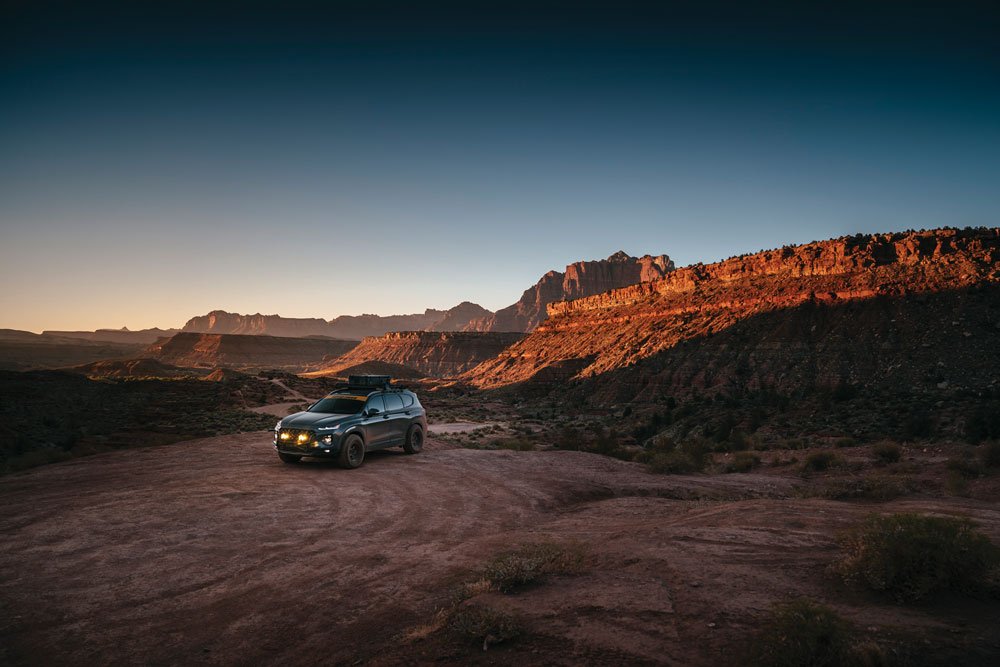 Comfortable Enough for the Family, Rough Enough to go Just About Anywhere

There’s a big problem with camping these days. With a vast ocean of different products out on the market, those who want to get into adventuring are intimidated to start by its perceived price of entry and vehicle choice. It doesn’t help seeing people on social media post their well-curated camping setups. It’s a stigma that only education will be able to wipe away. People see social media influencers with their $4,000 roof top tent, $800 puffy down jackets, and brand-new-off-the-lot, most-couture-edition-ever 4×4 adventure rigs dressed up to the nines and immediately recoil back thinking, maybe, just maybe, outdoor adventuring simply isn’t for them.

“All you need is the burning desire to get outside, potentially get lost, and a few of life’s basic necessities with just about any vehicle.” The two big stopping points for most of these would-be aspiring adventurers is a place to sleep and the vehicle to travel in. The term “softroader” is becoming popular as a bridge to gap the more avid hobbyists to those wanting to just get started. These “softer” vehicles aren’t as capable as a full-blown off-road 4×4, but they’re a step above “normal” cars due to their increased ground clearance and tire upgrades. They are great for everyday use with the family, but also capable enough to take on some dirt, gravel, and snowy roads on those days off. In comes John Pangilinan. He’s been working in the automotive scene for decades. He’s been lucky enough to have worked with Hyundai and other automotive brands for years, building different vehicles in their respective lineups for SEMA. For Hyundai, he’s built his own visions of the Veloster, Genesis R-Spec, Sonata, Tucson, and previously a 2013 Santa Fe Sport, which he had as a daily driver for many years. As he’s gotten older, and as his family grew, his car choices changed. When the opportunity to build another Hyundai Santa Fe for the 2019 SEMA Show came about, he hopped on the chance to bring his own vision of outdoor adventure to the platform. Thus, the ACV was born. From Alabama Hills to southeast Utah, this unsuspecting Hyundai Santa Fe proves its worth.

The “All Conditions Vehicle” (or ACV for short) was Pangilinan’s inner sneakerhead drawing inspiration from Nike’s ACG (All Conditions Gear) line of outdoor apparel and footwear. The Nike apparel wouldn’t be used for a Mt. Everest expedition or summit K2, but it’s versatile enough to be stylish enough for the city and also handle light outdoor adventures. The concept of the ACV was a hybrid between Pangilinan’s older Santa Fe Sport and his previous Hyundai Tucson project that was light trail and camp ready. The goal was to create something unique on an unconventional platform, such as the Hyundai Santa Fe, to show those aspiring adventurers that the outdoors can be enjoyed with pretty much any vehicle. Pangilinan’s goal was to build the Santa Fe to be comfortable for daily driving and commuting yet capable enough for easy, off-road trails to campsites and for other outdoor recreational activities with his family, such as road trips, surf outings, and in the mountains for snowboarding and the occasional sledding sessions. 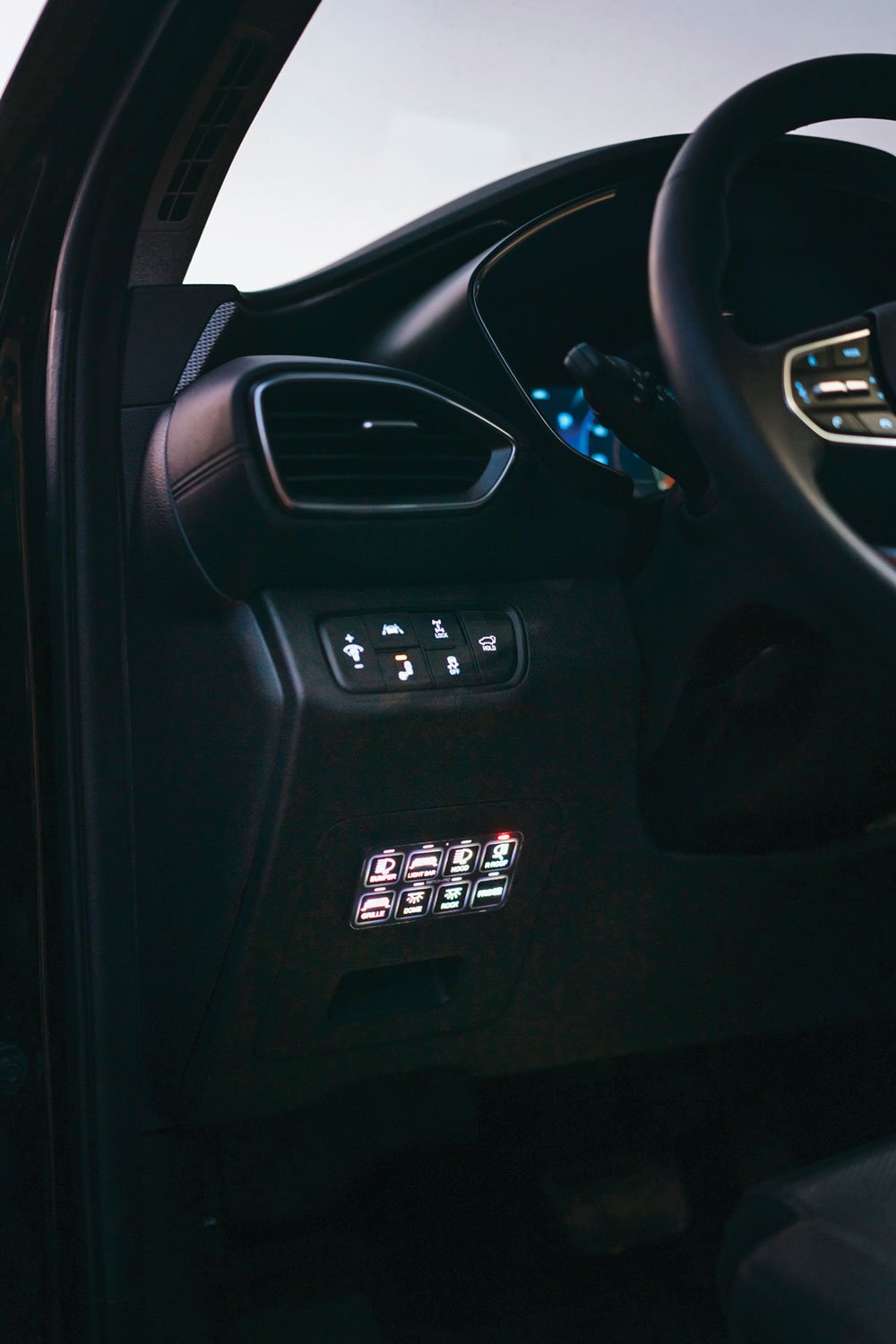 A tap on the Switch Pros controller activates the Baja Designs lights around the ACV. 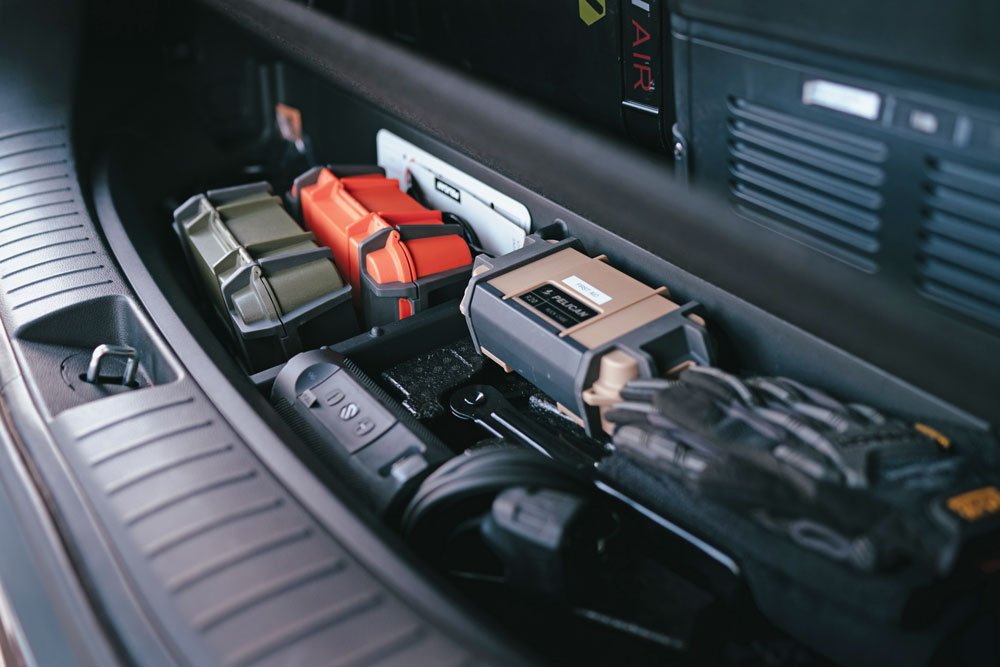 Pangilinan took delivery of his 2020 Hyundai Santa Fe a mere three weeks before the start of the 2019 SEMA show. Three. Flippin’. Weeks. That’s an incredibly short amount of time to get any vehicle “show ready.” But this problem was compounded due to the fact that Pangilinan was working with a car that barely had any aftermarket support for off-the-shelf parts. Almost everything had to be custom built. 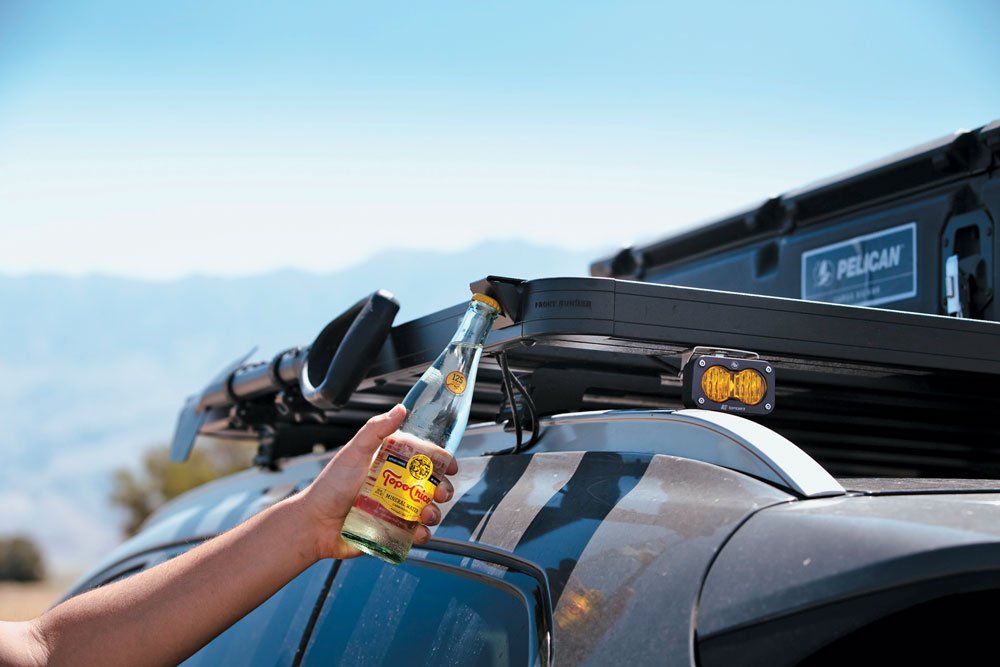 The Front Runner Outfitters rack brings smiles and opportunity to open a cold one after a day on the trail.

Luckily, this wasn’t Pangilinan’s first foray into the extremely tight timelines of the SEMA Show. While he was waiting for the vehicle to arrive, he created a schedule and communicated with all the brands and partners on the build. Pangilinan has garnered wonderful relationships within the industry over the years and each brand offered their support and shipped parts to him before the vehicle arrived. 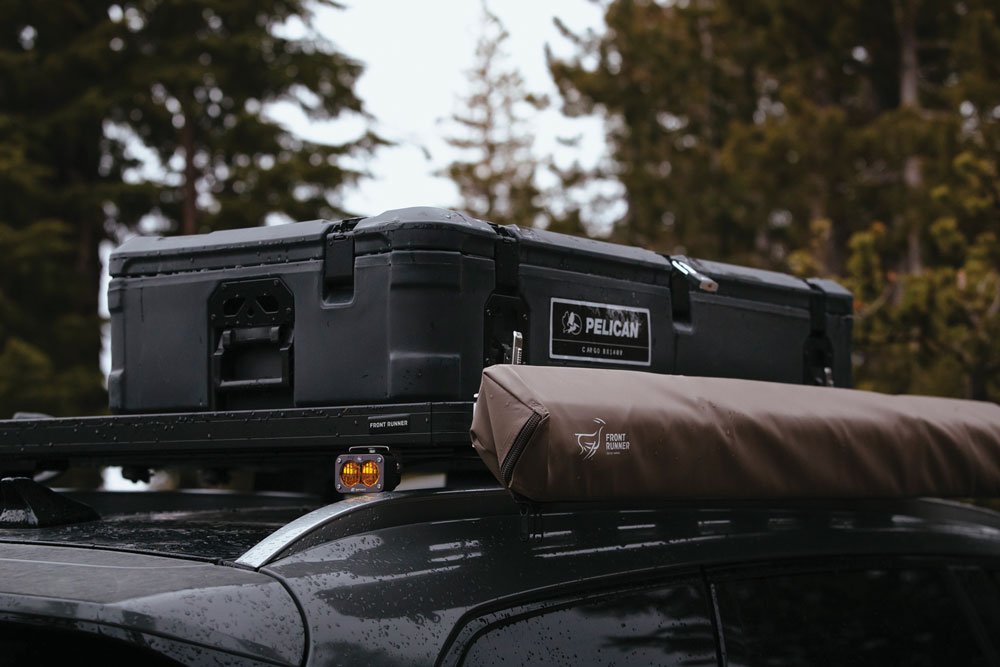 With so little time, Pangilinan did what he could to manifest his vision of an ACV and kept things stock if it didn’t need to be touched. The Hyundai 2.0L turbo engine was untouched. There’s this saying around the overland circles that the more you do to the engine, the less reliable it will be. This resonates with a lot of adventure vehicle builders since nobody likes getting stuck in the middle of nowhere with engine problems. Pangilinan did however have CATuned Off Road, an off-road fabrication shop based in Sacramento, California, modify the front and rear suspension with a custom coilover system with height adjustability. To round out the performance end of things, Pangilinan put on a set of Asphalt Black fifteen52 TurboMac HD 16×8 wheels that were wrapped with a full complement of 265/75R16 Toyo Tires Open Country ATIIIs. If there’s anything an aspiring outdoor enthusiast should do first with their car, it’s definitely worth it to change out to a set of all-terrain tires. Off-road capability—and driver confidence—jumps leaps and bounds with a set of AT tires!

“The goal was to create something unique on an unconventional platform, such as the Hyundai Santa Fe, to show those aspiring adventurers that the outdoors can be enjoyed with pretty much any vehicle.” 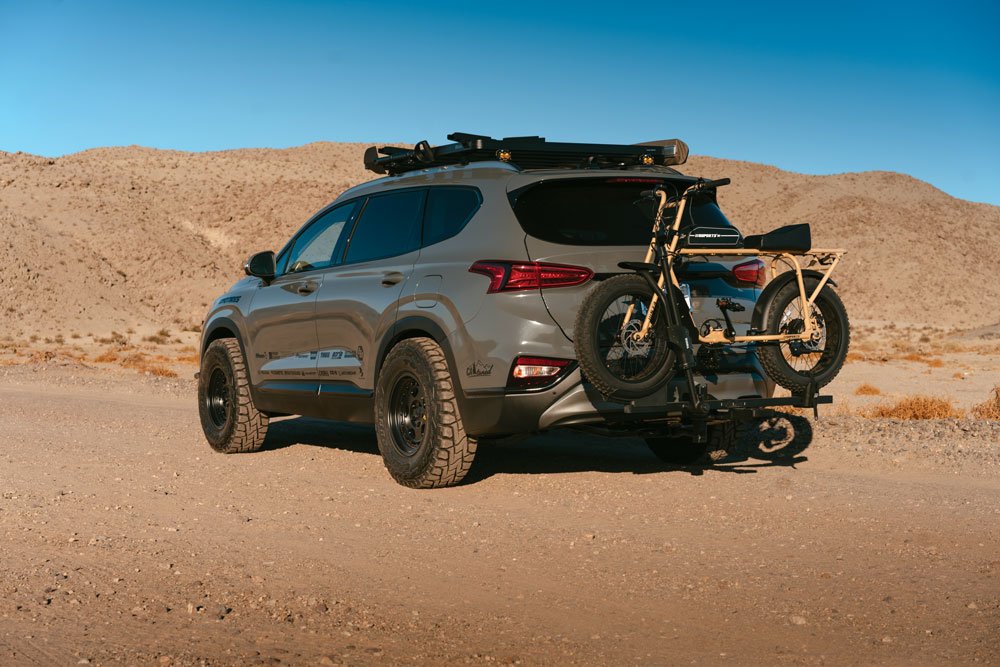 A Curt Hitch Receiver holds the Thule T1 bike rack, so even an e-bike can be taken on fun travels.

For the outside of the car, Pangilinan wrapped it at BP Autosound with a gray vinyl. He had a Front Runner Slimline II roof rack installed. This rack featured a shovel mount, surfboard rack, a Front Runner awning for that shade when the sun gets a little too much to handle or when the weather gets a little wet, and, most importantly, a beer bottle opener. A whole suite of exterior LED lights were also mounted to the Santa Fe, including the LP6 Pro amber spotlights, Squadron Sport amber driving LEDs, and S2 Sport spotlights to light up camp. A custom front bumper bar was fabbed up by CATuned Off Road. A WaterPORT Day Tank was also mounted to the rack. It’s a pressurized water tank to keep the kids clean and showering after a morning of surfing with the custom-made Blackbird Surfboard. Finally, a Curt Hitch Receiver was installed to accommodate a Thule T1 bike rack.

“As he’s gotten older and his family grew, his car choices changed.” 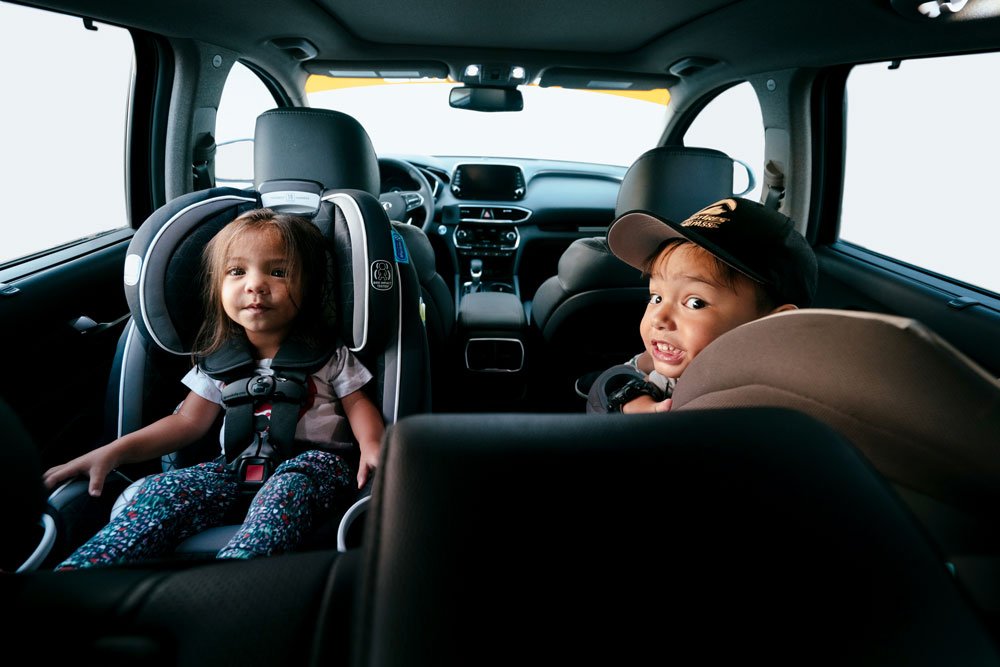 Strapped in and ready for adventure, the ACV provides enough room for the kids and their car seats.

The inside of the car didn’t need too much, since it was more of a daily driver than a dedicated adventuremobile. Pangilinan did have a set of Weathertech floormats put in and a Switch Pros controller to control all his external Baja Design lights. He had his OEM sound system upgraded to a Pioneer system by Ivan at BP Autosound. Ivan also wired up all the Baja Design lights. A PowerTank Crossover Tire air-up and repair kit was also added for those air-down and air-up moments. And the biggest camp cherry on top, he had a Dometic fridge put in, which is powered by the Hyundai’s 12V power plug in the trunk area. 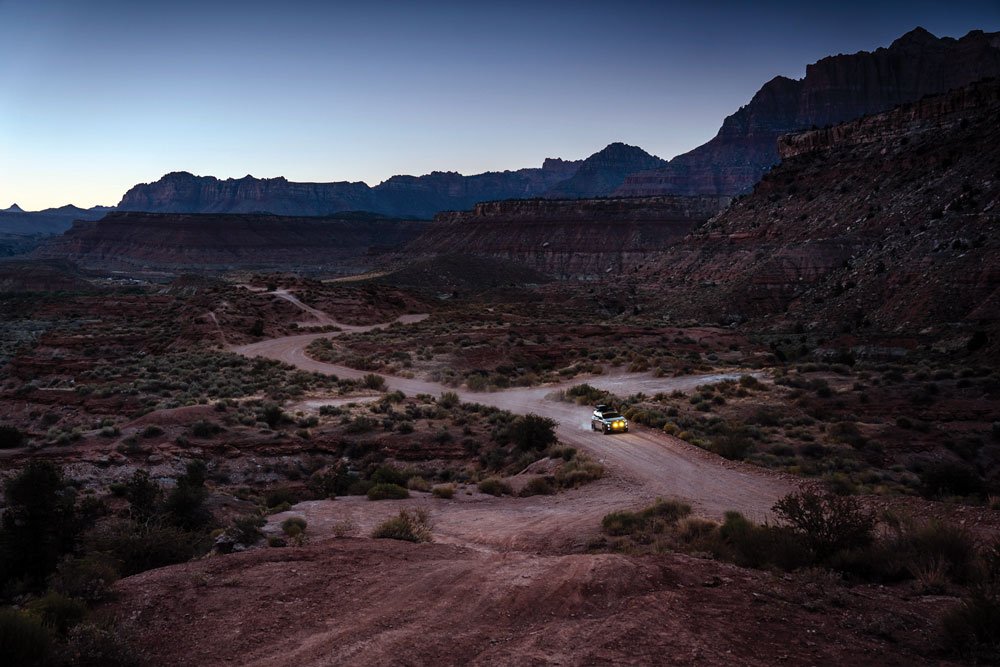 Exploring Utah, the ACV seems right at home amongst the red rock.

Since the ACV was mainly a daily driver, Pangilinan needed a storage system that was easily removable. He went for a full complement of cases from Pelican. On top of the rack, he had a Pelican Cargo BX410 mounted. On the inside, he decided to go with a Pelican 1535 Air with Trekpak for camera and accessories, a Pelican Ruck R60 for straps and other items, a Pelican Ruck R20 for multi-tool, knife, extra batteries, flashlight, and a Front Runner Wolf Pack for food and pantry storage. Badged the ACV (All-Conditions Vehicle), this Santa Fe proves that adventure can be sought after by even the most unassuming vehicle.

Due to the COVID-19 pandemic crisis, Pangilinan hasn’t had much time or opportunities to take out the ACV. However, he was able to take his family on a trip to Big Bear, California, right after a successful SEMA Show to celebrate his birthday. Though there was no snow on the road, he still had a wonderful time with his family outdoors and took the kids sledding.

“Pangilinan’s ACV proves that you don’t need much to get started. You can have a daily commuter that moonlights as an adventure rig.” 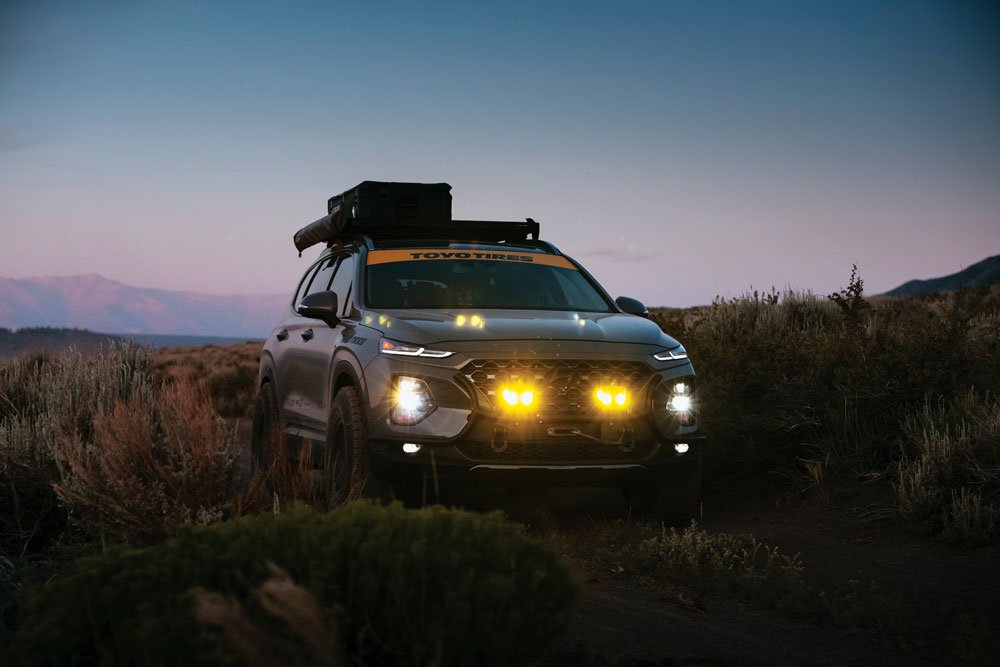 Pangilinan was also recently invited to participate in a new Toyo Tires commercial campaign, which will have aired by the time this article runs. Not only was this his first long-distance, multiple-day trip in the Hyundai, but it was his first time traveling during COVID-19. The commercial took him on a 1,000-mile romp in California through spots, such as the infamous Alabama Hills, Lone Pine, Olancha Dunes, and Shaver Lake. He even made his way to southern Utah. It was a very memorable experience for Pangilinan as it was his first time visiting many of these iconic places. He and the Toyo Tires crew experienced everything Mother Nature could throw their way. They experienced over 100-degree heat, a thunder and lightning storm, and even a 6.0 magnitude earthquake on the first day of filming! It was a wonderful time with incredible people. Especially since he got time to spend with friends and other Team Toyo members who he had only previously known through social media.

“With so little time, Pangilinan did what he could to manifest his vision of an ACV and kept things stock if it didn’t need to be touched.” 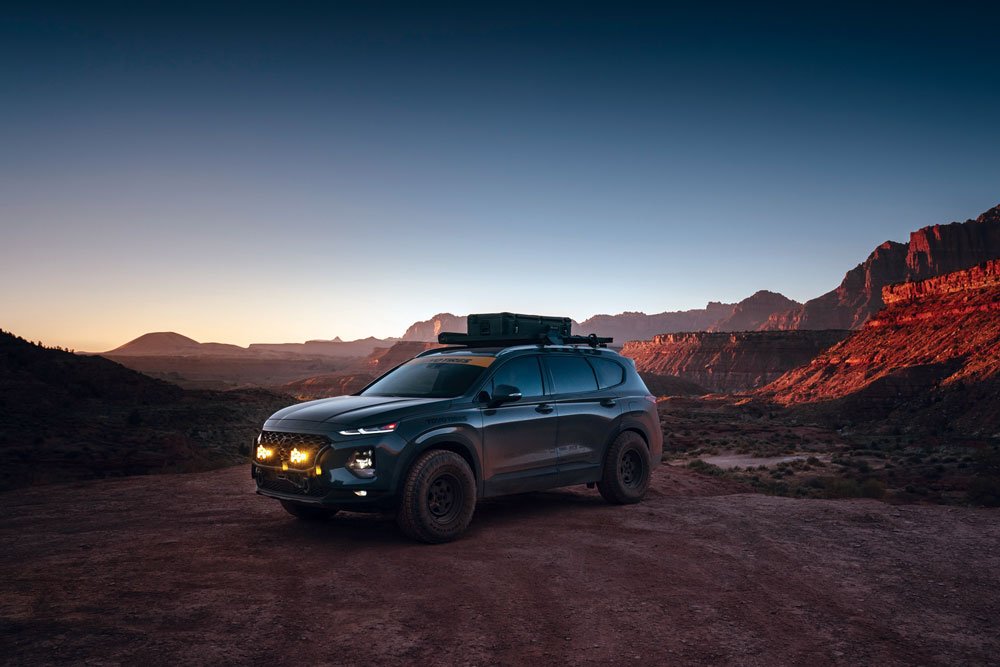 The LP6 Pro Amber spotlights fixed to the custom CATuned Off Road bumper help guide Pangilinan as the sun sets in Utah.

The perceived price of entry to self-sustained vehicle-based exploration can be intimidating to those who want to start. Pangilinan’s ACV proves that you don’t need much to get started. You can totally have a daily commuter that moonlights as an adventure rig. Every major thing people see on social media is added-on luxury—including the rough and tumble, checkbook-emptying, monster 4×4 overland builds. All you need is the burning desire to get outside, potentially get lost, and a few of life’s basic necessities with just about any vehicle. The ceiling isn’t dictated by the material things to do it with, but instead, by what a person thinks they can and cannot do.