→ Submit your rig and win a Tread magazine feature of your truck! ←
Get the Magazine
Features, SUVs, Vehicles
Story by Kelly Nomura
Photos by Leo Cuomo 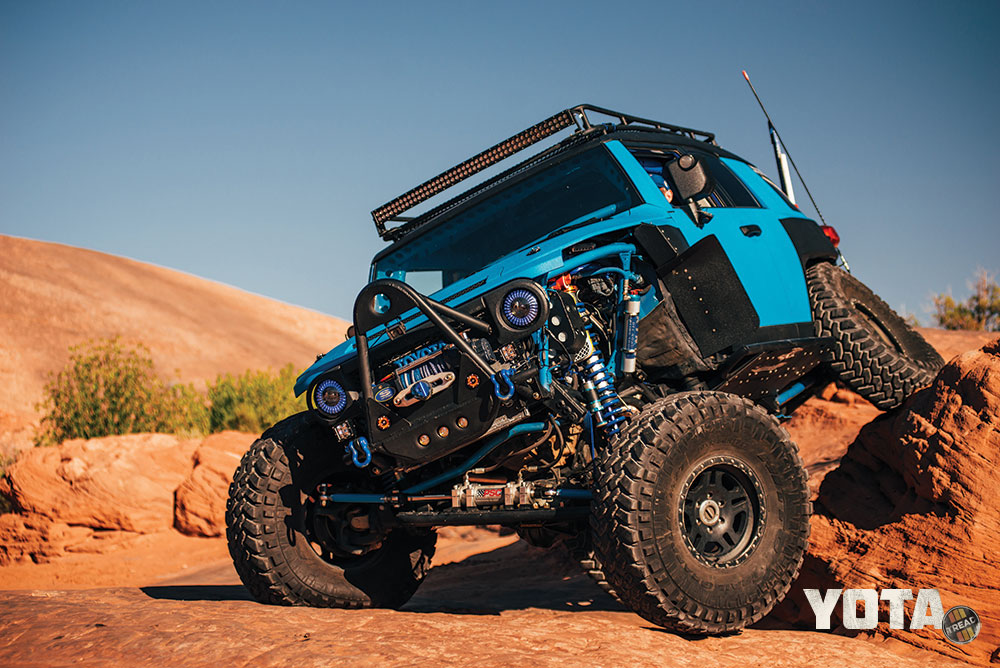 For many who off road and overland, all it takes is one time out on the trail and that person is hooked. A new found hobby is formed and many adventures soon follow. Once that trail-seeking bug bites, many of us see various iterations to their beloved 4×4. That is exactly what happened with this extreme rock crawling FJ Cruiser. After only one trail ride with a friend, a new hobby ignited and the desire developed for owner Sean Voruz to push his trail running limits.

With an SAS FJ Cruiser like this one, you’d be amiss to not get the most bang for your buck on a several-state-spanning trip. 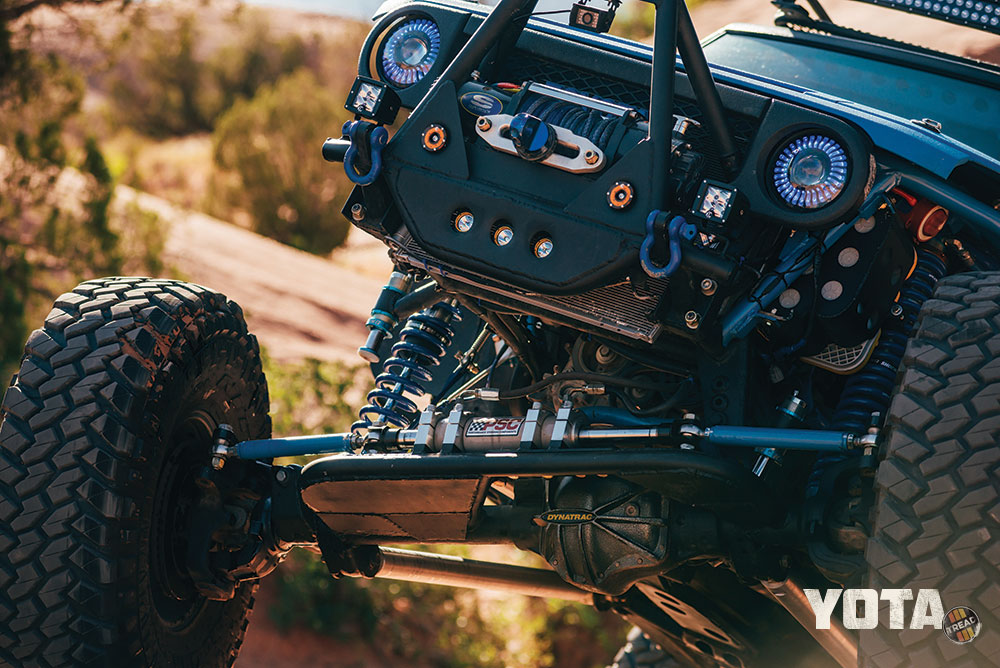 The solid  axle up front combined with the King  2.5 coilovers give this blue beast flex for days.

The 2007 FJ Cruiser started out as a 4WD option to get around the snowy streets during Wisconsin’s winters. However, after a move to Colorado, the FJ Cruiser started a whole new life as an off-road adventure machine. Voruz took the FJ on a trail run with a friend who owned a Jeep. From that point, Voruz was hooked. Inspired by the trip, he Immediately decided to lift the FJ and installed a 3-inch Toytech lift. He also added a 1-inch body lift, a full set of skid plates, aluminum front bumper with a winch and a roof rack, all within a 6-8 month period. 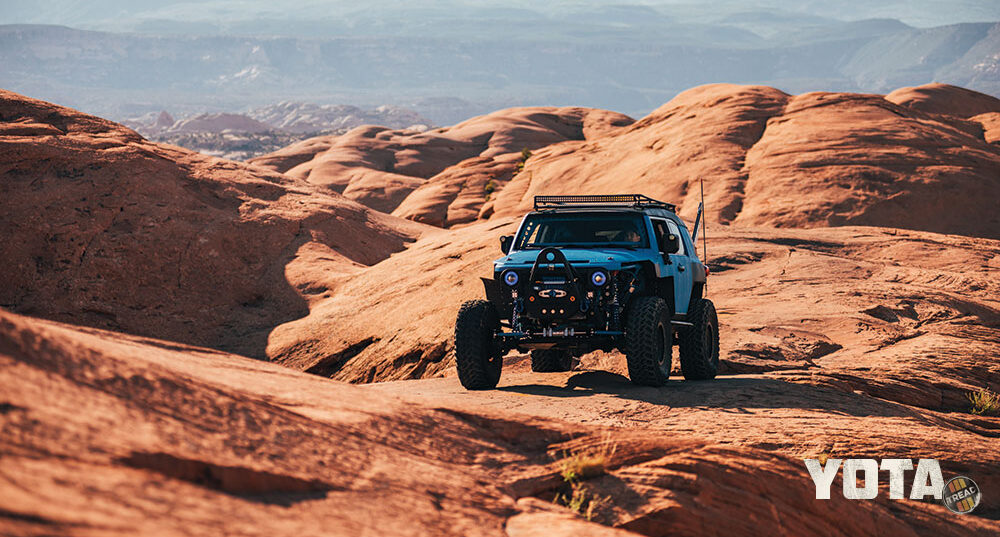 Hitting the trails in Moab is exactly where this FJ Cruiser is meant to be.

This rendition lasted about a year until Voruz wanted to go on more difficult trails. He took the FJ Cruiser out on most weekends and got plenty of time behind the wheel. The more he left the pavement for dirt, the more he felt the need to challenge himself. One harder trail lead to another harder trail, and Voruz knew it was time for another upgrade to the FJ Cruiser.

“It’s that attention to detail that caused him to do most of the custom work himself.”

Seeking advisement from professionals in the off-road community, he was originally talked out of a solid axle swap (SAS) and installed a long travel suspension setup instead. That didn’t last long. Along with a Total Chaos suspension, he added an ARB air locker and took out the FJC’s A-trac. He also installed a Dana 60 in back. The upfitted FJ Cruiser rode like this for about a year until a torn CV boot convinced Voruz it was time to do the solid-axle swap.

Voruz has always been very involved in the FJC’s build. If he didn’t do the work himself, he was definitely there helping out. He completed the SAS with Rock Solid Toys in California, making several trips from Colorado to California to help out and learn how to perform the swap. After it was finally finished, Voruz jumped in the SAS FJ Cruiser and drove straight to 2017 FJ Summit to put it to the test. 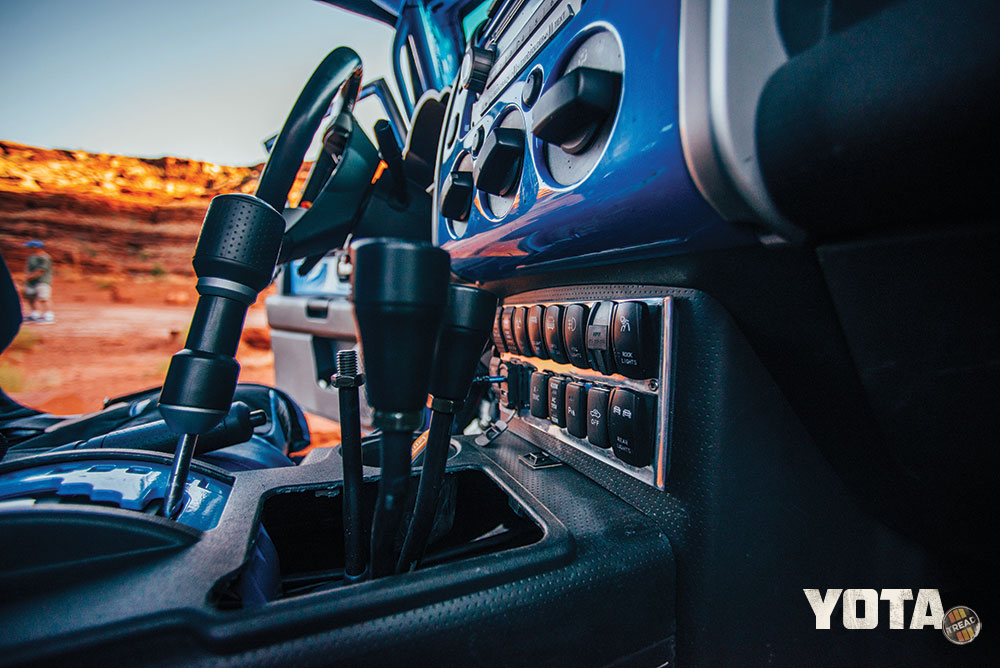 All the gear shifters can not be missed when climbing into the passenger seat. They control his front and rear axles, plus a lower gear option that changes the gear ratio of both axles.

Tackling trails with this setup was thrilling, and Voruz kept it this way for three years. During that time he experienced one of his most memorable trips. In 2018, Voruz and his friend drove the SAS FJ Cruiser on a trip that marked over 2,000 miles out to the Rubicon in California. They pit stopped in Tonopah, Nevada, to pick up his friend’s father and some guys from his off-road group. Together they all drove out to Rubicon Springs and did the famous Rubicon trail in two days. After a couple more days of camping out in Nevada, Voruz and his friend headed home, but not without a quick stopover in Moab to run some hard trails on their own. With an SAS FJ Cruiser like this one, you’d be amiss to not get the most bang for your buck on a several-state-spanning trip.

One harder trail lead to another harder trail, and Voruz knew it was time for another upgrade to the FJ Cruiser. 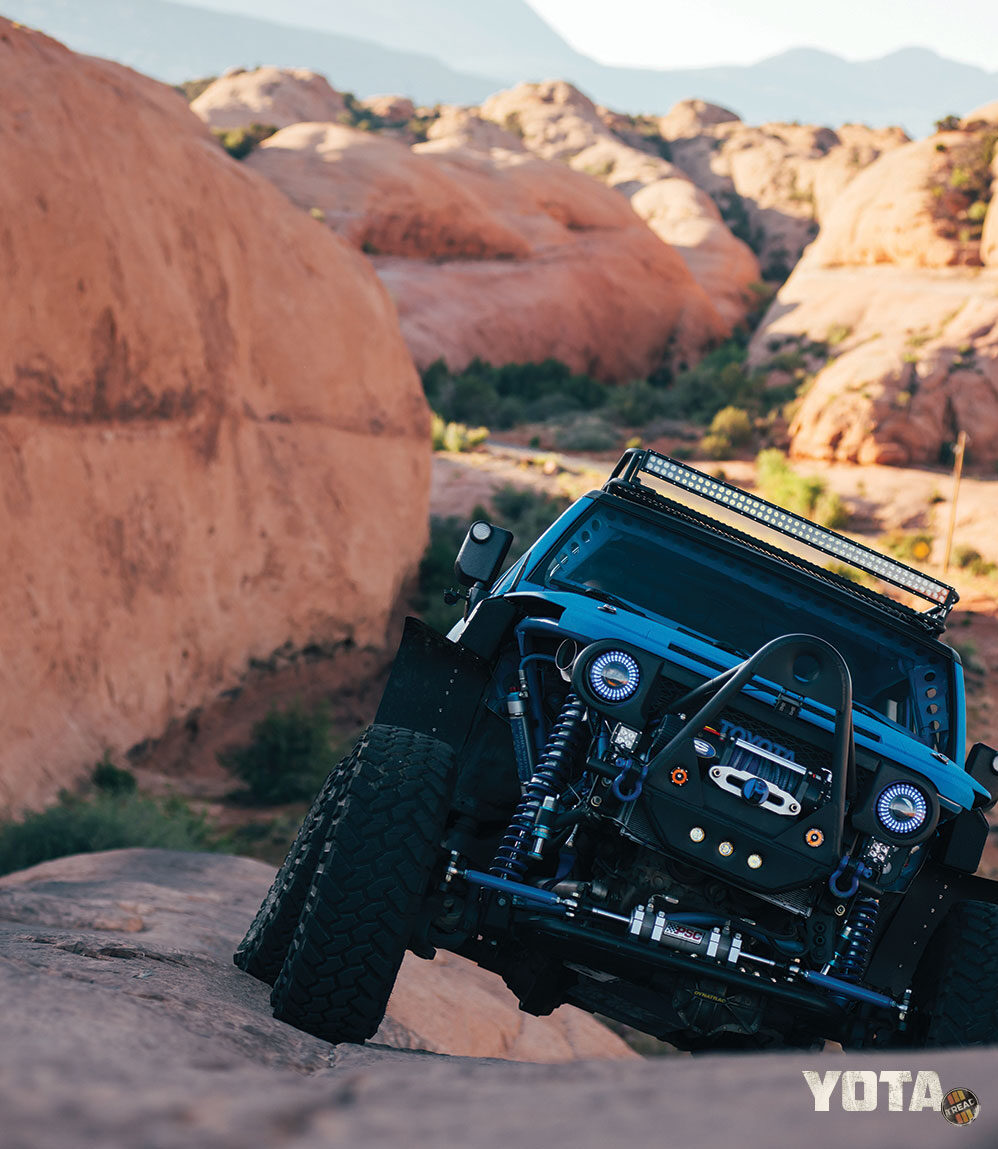 The unique front end of this adventure rig stands out in a crowd and proves its off-road prowess.

The weekend trail warrior drove this build version for a few years until he eventually modded it some more. At the time, there wasn’t enough up travel with the larger 40-inch tires. They were hitting the fenders, much to the dismay of Voruz. So back under the knife went the FJ Cruiser and the front and rear fenders were removed.

“My whole thing was to only cut off the front end and get rid of the fenders. Nothing else, just that.” Voruz shares. “But I got the tube cage in the front started, built the frame, and since I had it all torn apart, figured I might as well just strip everything out.”

He then removed the entire interior, took out the insulation and rubber matting and cleaned it up. Then he sprayed the interior with a ceramic heat barrier and lizard skin, a sound deadening rubber spray. At that point, he also fabricated and installed a roll cage since everything was out and he wanted one eventually. 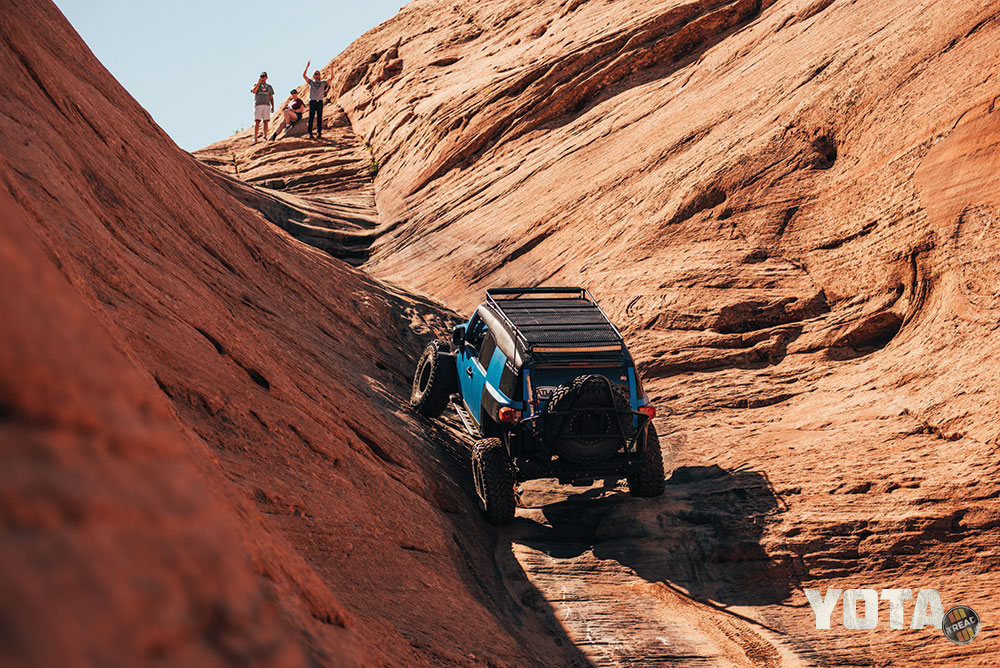 We got the chance to ride in this blue beast out in Moab. Not only did it make an impression on us, but also on others we ran into on the trail. Onlookers had to get a closer inspection no matter where we stopped. All were impressed with the hard work Sean Voruz has invested into his off-road rig. Impressing the Moab locals and those who also build their own rigs is exactly what Voruz wants. Mission accomplished. One Moab trail guide even commented, “He did it right,” A nod to the dedication and attention to detail used on this extreme rock crawling FJ Cruiser.

It’s that attention to detail that caused him to do most of the custom work himself. When asked to name his favorite modification, Voruz replied, “The tube chassis and cage because it looks crazy and I love it. It makes it unique. There’s not another FJ out there quite like mine.” Definitely the attention grabber of the build, people always ask him about it, and Voruz proudly gets to tell people he built it himself.

Voruz took the FJ on a trail run with a friend who owned a Jeep. From that point, Voruz was hooked. 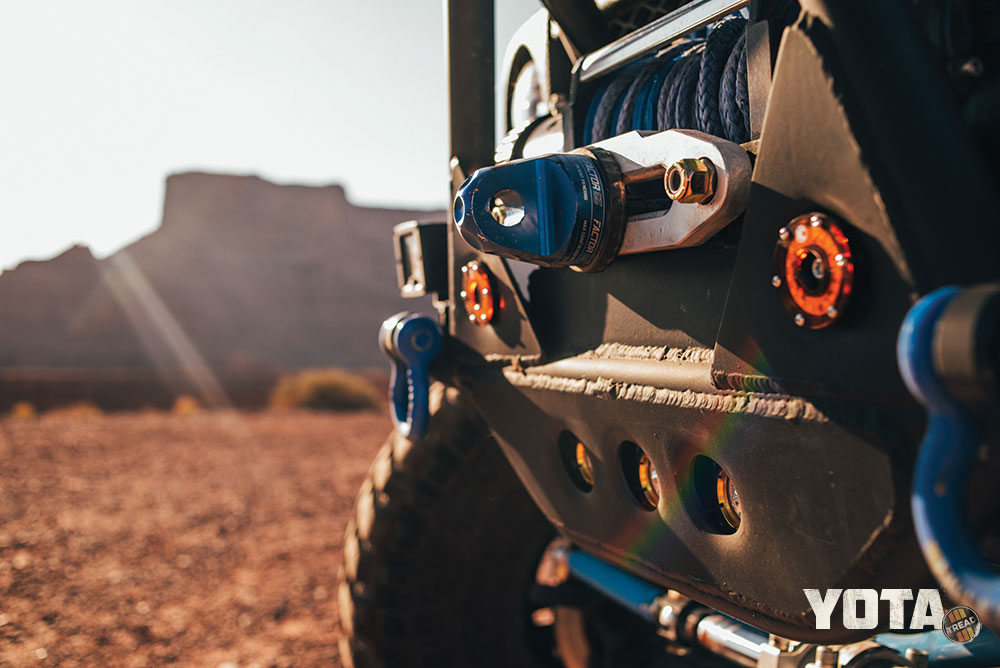 A Super Winch is available for use when the FJ gets stuck, or to help others on the trail. 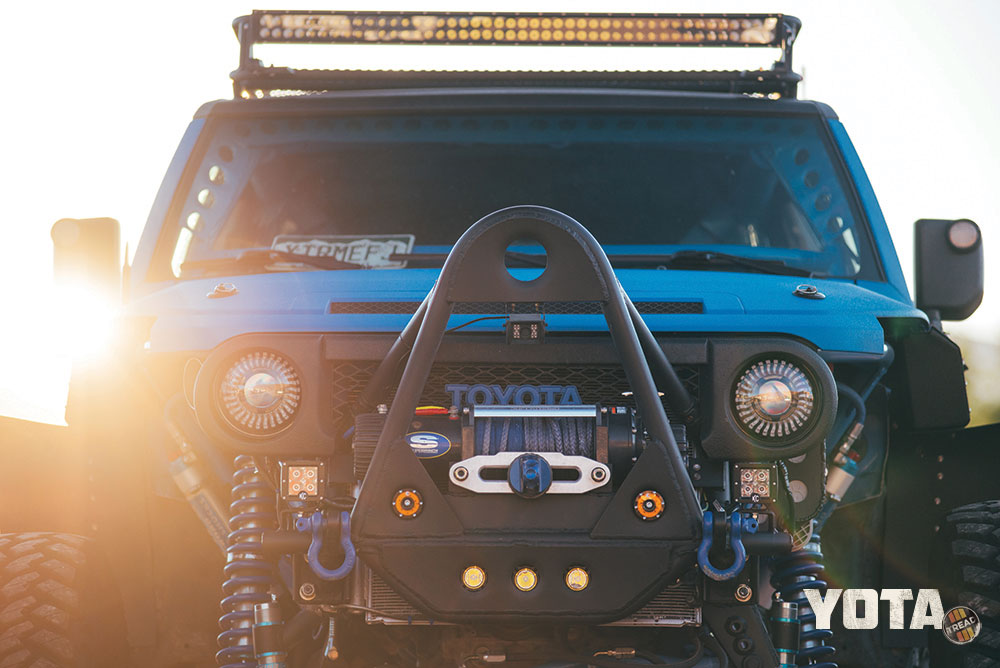 Finally at a point where he’s happy with the capabilities and proud of his work, the only thing he would change now is adding fender tubing armor on the rear quarter panels. And well, that would have been a solid addition for the exciting tip over we experienced with him in Moab. Experienced driving got us back upright and damage was minimal. However, the rear quarter panel armor may have saved his rear window. Should he have another sideways incident or possible rollover, Voruz doesn’t mind. He told us, “And if ever it rolls, the FJ top comes off.” At that point, the SAS FJ Cruiser would mirror the Jeep that started it all.

On it’s fourth iteration, this rock crawling FJ Cruiser is always ready for an adventure.

You can see more of the SAS FJ Cruiser build and the Sean Voruz’s adventures on Instagram and Facebook @seanvoruz.