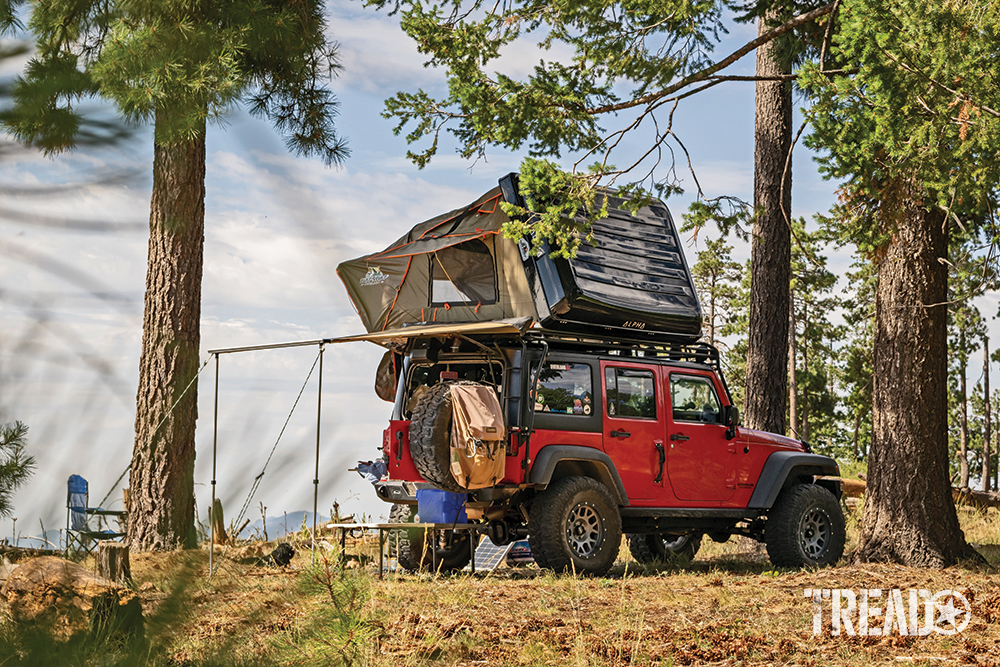 No matter if you’re adventuring in the remote wilderness or dashing across the country with your family, having a fuel tank boasting long-range fuel capability is important. It minimizes fuel stops, and it’ll get you to your end destination more quickly.

However, if you’re tired of constant fill-ups and want to expand your vehicle’s capacity, adding an extended-range fuel tank could be the perfect answer. Some vehicles, such as Toyota Tundras, have stock tanks ranging from 26.4 to 38 gallons, but many other automakers offer much less than that.

Case in point: the 1991 right-hand-drive Mitsubishi Pajero my husband and I own. Our minuscule OE bladder offered 250 miles per tank—at best. Our 1994 Mitsubishi Delica Space Gear’s tank wasn’t much better … not good when you’re spending remote nights in the middle of nowhere or running a 5,120-mile-long Arctic road rally in the dead of winter.

Camping up on the Mogollon Rim, outside of Payson, Arizona offers expansive views while nestled in the pines of Arizona’s high country. (Photo: Josh Roelle)

We hated dealing with jerry cans. While they do work, they can often be messy, smelly, and lead to frustration. Plastic containers can discolor or leak; metal ones can dent or rust … not to mention the constant venting to release pressure built up within them. We wanted a better solution for our travel-fueled, long-range woes.

What are the alternatives? Installing an auxiliary or replacement fuel tank could double your adventuremobile’s capacity, as opposed to that of its OE holder—giving you endless opportunities to explore Mother Nature. Not only do they offer an increased range, but they’re also safer and more secure—no more jerry can “eye candy” for thieves to steal.

Large-capacity fuel tanks also come in handy when foul weather hits, giving you peace of mind should a wildfire break out or floods encroach on your surroundings. Lastly, auxiliary or replacement tanks can cut fuel costs by allowing you to fill up when you want (such as when cheaper fuel is nearby) and not necessarily when you have to.

We spoke with representatives from two companies that specialize in making long-range fuel tanks.

Idaho-based Long Range America (LRAM) is the exclusive U.S. distributor that imports replacement and auxiliary long-range tanks from Long Range Automotive (LRA), based in Australia. Founded in 2015, LRAM has imported these tanks for a variety of vehicles, including models such as Lexus GXs, Toyota Tacomas, Mercedes Sprinter vans, and even Mitsubishi Delicas.

Installing an auxiliary or replacement fuel tank could double your adventuremobile’s capacity, as opposed to that of its OE holder—giving you endless opportunities to explore Mother Nature. 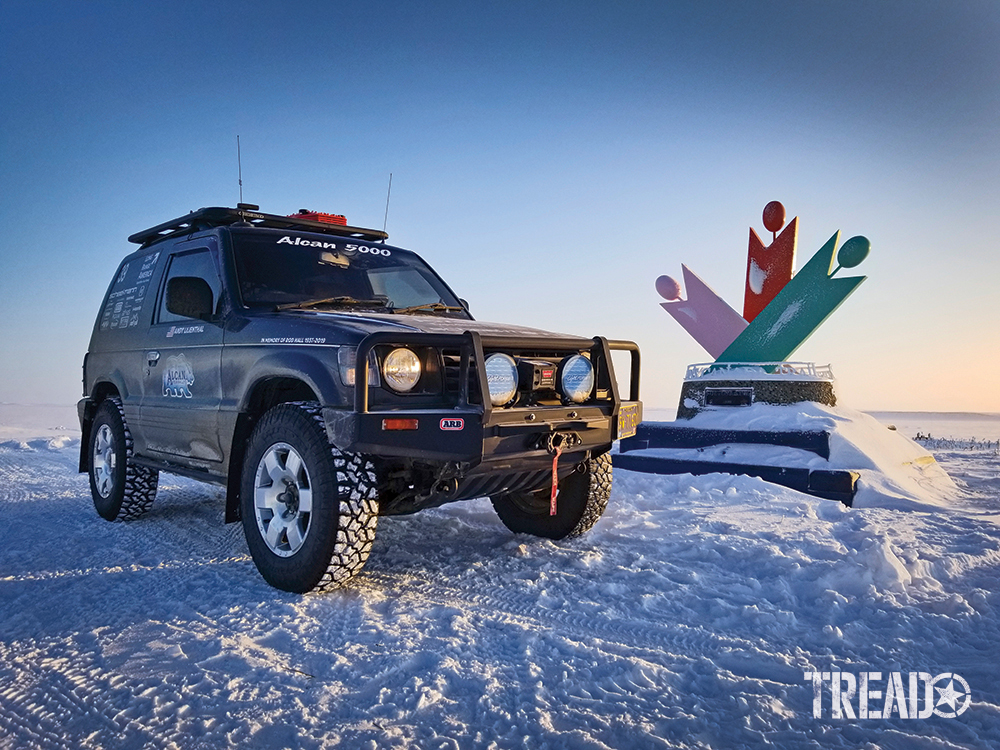 The author’s Mitsubishi Pajero successfully navigates its way to the Arctic Ocean during the 2020 Alcan 5000 Rally. (Photo: Mercedes Lilienthal)

An auxiliary tank, otherwise known as a “transfer” or “add-in” tank, is an extra fuel tank that works in tandem with a stock OE fuel tank. Most of the time, an aux tank will be mounted beneath a vehicle—as with our Pajero—but it can also sit on top of one if it’s a truck bed transfer tank, such as models offered by TITAN. Both LRA and TITAN auxiliary tanks offer a unique opportunity to “fill on the go.” With a simple press of a button, the add-in tank will start transferring fuel into the main tank, no matter if your vehicle is touring through town, tackling trails, or sitting silently in a parking lot. 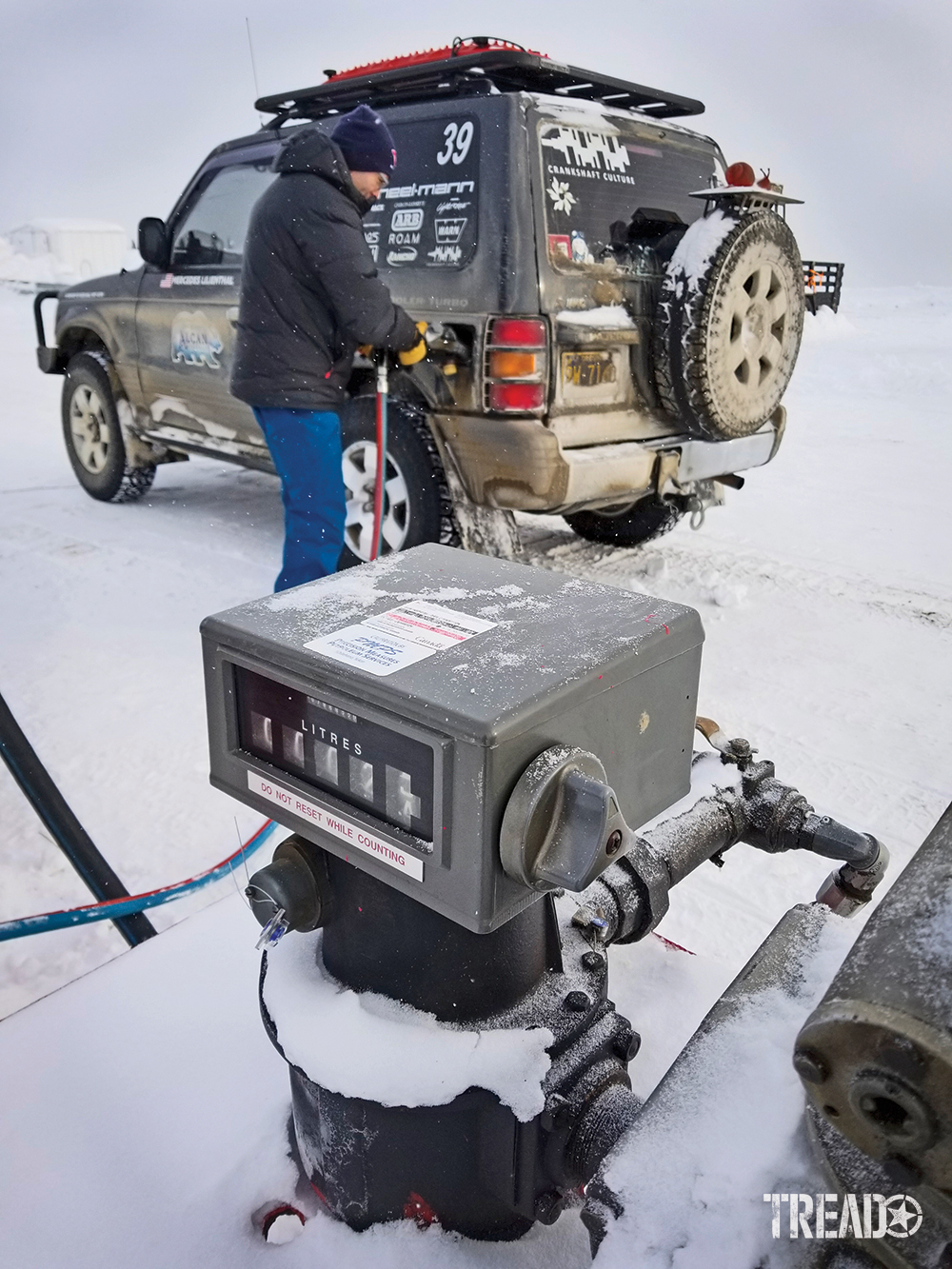 An add-in or transfer tank taps into a vehicle’s main OE tank is connected to its fuel system and has a transfer pump that initiates fuel transfers after a user presses the system’s button. Both LRA and TITAN aux tanks boast an in-cabin fuel gauge with a start/stop button that can be mounted in various locations; however, other manufacturers could vary. We had the Pajero’s gauge that monitored the LRA aux tank mounted in an empty knock-out switch plate on the vehicle’s dashboard. 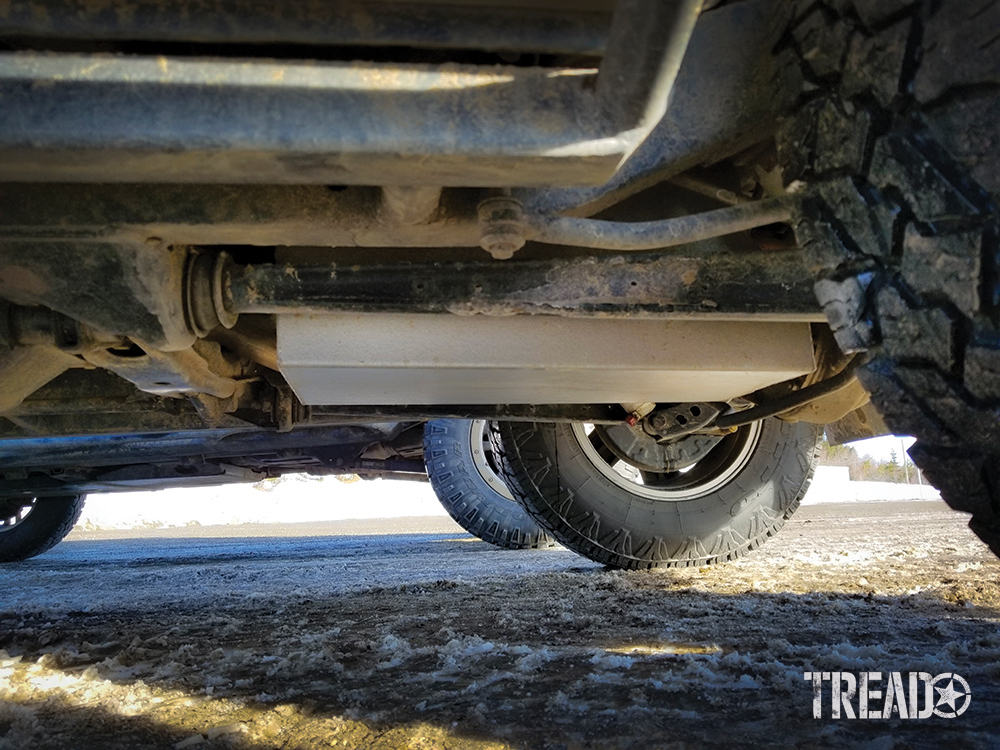 The LRA aux tank performed flawlessly during the 5,120-mile Alcan 5000 Rally. Temps down to -40 (F) didn’t deter it from transferring fuel when necessary, and it functioned as intended. (Photo: Mercedes Lilienthal)

Not only do auxiliary tanks significantly increase capacity, but they also have a separate fill neck (aside from the OE opening). Behind the Pajero’s fuel door are two holes: one for the stock tank and another for its aux add-in counterpart. Once the puny Pajero bladder was upgraded with the extra tank, it boasted a robust, 500-plus miles of range. 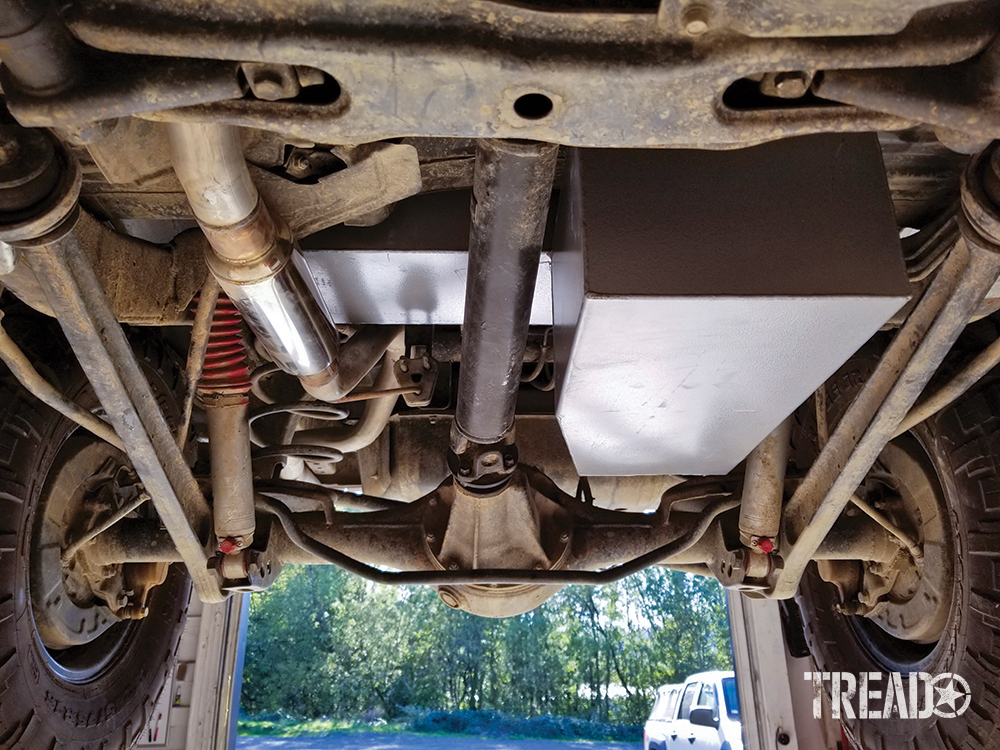 An LRA aux tank taps into a vehicle’s main OE tank. It’s connected to the vehicle’s fuel system. The tank has a transfer pump that transfers fuel. (Photo: Mercedes Lilienthal)

Aux, add-in or transfer tanks come in many shapes and sizes. They increase the range to nearly double the OE capacity. Check range statistics on the tank you want before purchasing it. If you know your way around your vehicle, are skilled with wrenches and have appropriate tools, you might be able to install an auxiliary tank yourself. About a quarter of TITAN customers install their own tanks. Alternatively, it could be installed by a trained professional. LRAM requires this for most of its models.

Another option to up your range is a replacement fuel tank—out with the old, and in with the new. Similar to aux tanks, replacement tanks can provide up to twice the range capacity when compared to stock tanks. Again, check the range statistics of the tank you’re interested in before purchasing it. 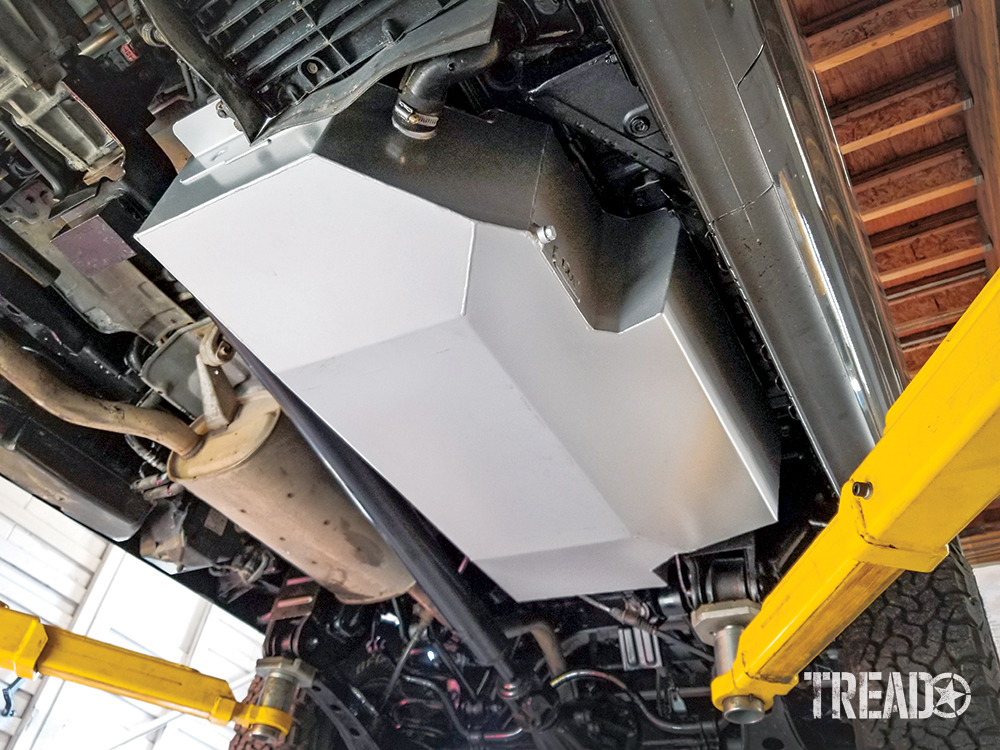 It is a happy day after having another LRA long-range tank installed for the author’s 4×4 fleet. It is for her Delica Space Gear van. (Photo: Mercedes Lilienthal) 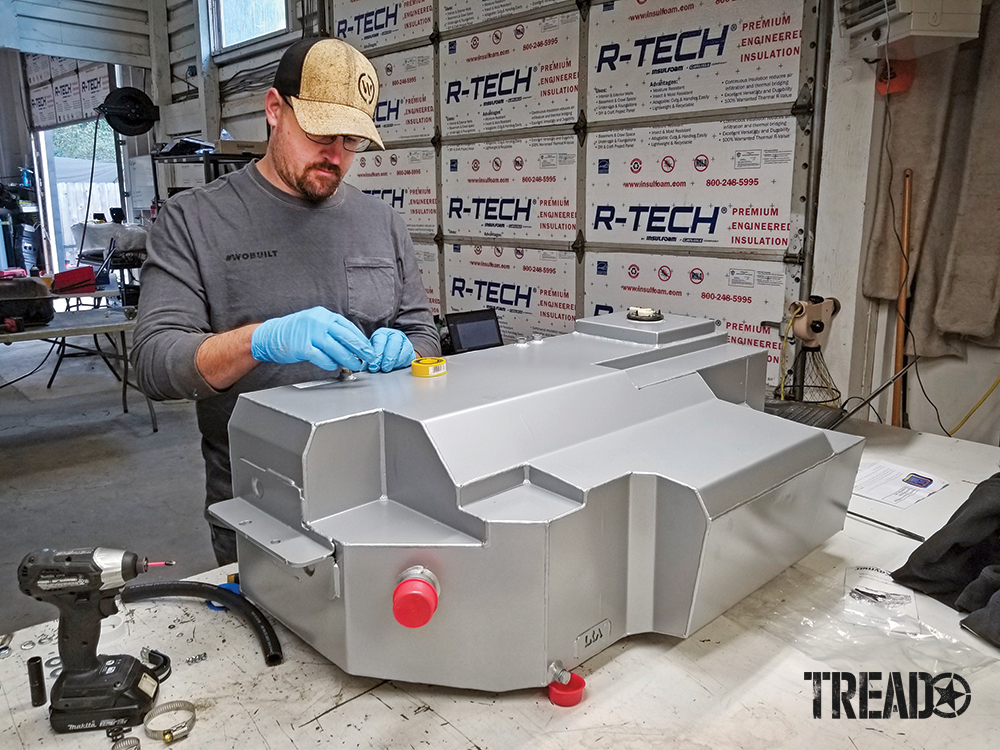 Wanderlust Overland, an approved LRA install shop, recently upgraded the Delica van with an LRA replacement tank. Installation was a snap and took just a few hours. Unlike the Pajero aux tank, the Delica tank doesn’t showcase an extra fill opening or interior fuel gauge and switch. Instead, it uses the stock fuel gauge, light and OE fill neck. (Note: The van’s gauge drops slowly now because we doubled our capacity to an impressive 33 gallons. This gives us approximately 600 miles with one fill.) 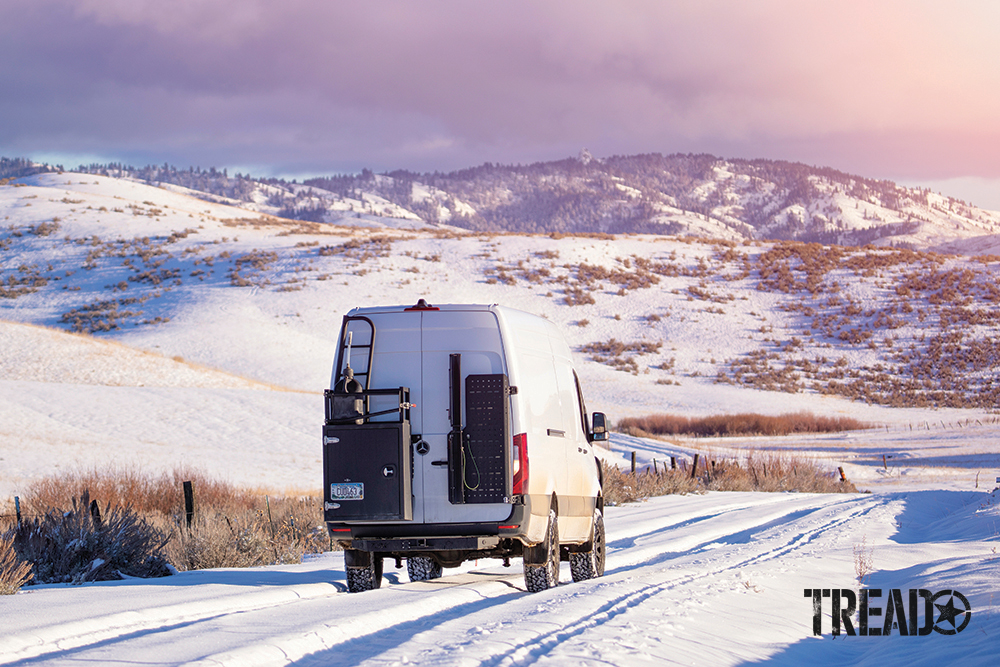 This third-gen Sprinter van is equipped with a 39-gallon LRA replacement tank in the wilds of Idaho. (Photo: Amanda Allard Photography) This Jeep peers out over the red rocks of Sedona Arizona along the Broken Arrow trail. It is a popular destination for off-roaders, hikers and sight seekers. (Photo: Josh Roelle)

“The state requires an executive exemption from the California Air Resources Board (CARB) for aftermarket replacements or add-in accessories that might affect fuel storage or emission systems,” explains Ward Harris, co-owner of the company. “We’re working toward an exemption for each of our more popular kits to satisfy the state’s reasonable interest in compliance with new vehicle evaporative emission standards.”

Aux, add-in or transfer tanks come in many shapes and sizes. Even so, once installed, they could up the range to nearly double the OE capacity. LRAM fits a wide variety of gasoline and diesel adventure rigs for recreational, commercial, and specialty uses. They boast a 36-month warranty on tank parts and materials—with no mileage cap.

Conversely, TITAN Fuel Tanks sells replacement polymer-based tanks for diesel and gasoline vehicles in the state. In addition, the company backs its polymer tanks with an unlimited lifetime warranty. 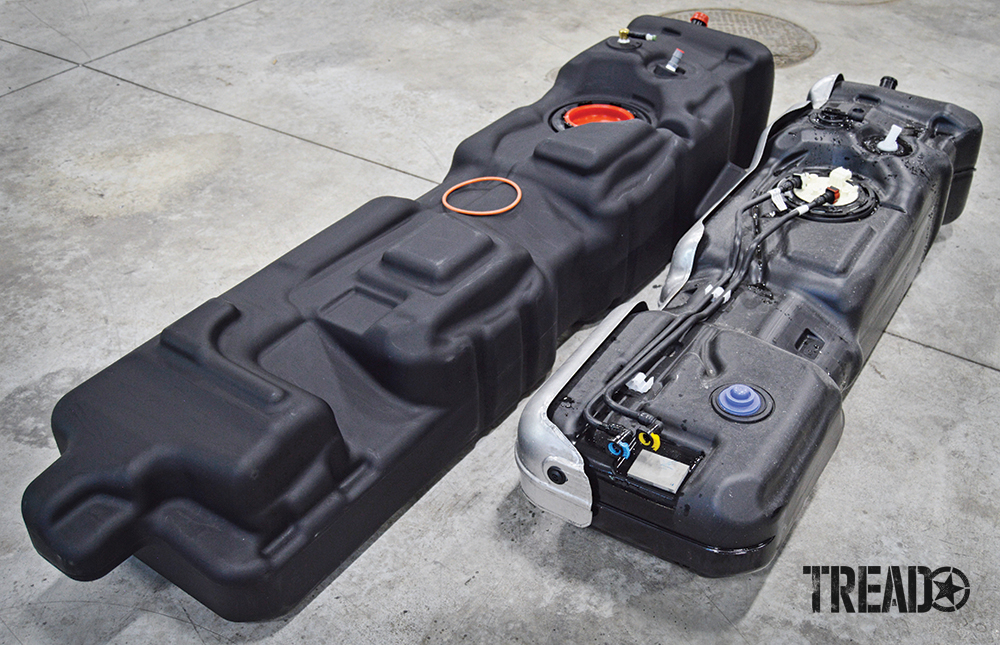 “All of our tanks are 50-states-legal; they meet and exceed all EPA and CARB regulations,” points out Mike DeFord, marketing manager of the company.

(CARB is updating its procedures about how the application and review process might change. Time will tell if Californians will get additional long-range tank options in the future.)

We’ve never looked back since we installed an LRA Pajero aux tank for the Alcan 5000 Rally. A simple push of a button fueled us up. Others filled OE tanks with jerry cans in temps of -20 (F) and below. The aux tank worked so well that we opted for a long-range LRA replacement tank for the Delica van. This doubled our mileage for future #vanlife adventures.

“Our tank works so well, you don’t even know it’s there!” exclaims Andy Lilienthal. “Having a long-range tank also ‘spoils’ you for vehicles with regular tanks. Now, we stop more for bathroom breaks than fill-ups. I wish LRAM could increase my bladder size!”