As darkness sets in, temperatures plummet to -30 degrees. Blackness quickly surrounds everything as crisp snow squeaks under heavy-duty boots. Your mind is weary, body hungry, as you slowly grab the first load of gear from your rally rig. The rear door creaks begrudgingly as you shut it and trudge your way into warmth.

“Our little Pajero went from the one that possibly could to one that did. We stayed on route for all TSDs, finished the rally strong, and completed all extreme controls.”

The lack of sleep and constant concentration sears deep into your body. You’re here in the middle of the frozen Arctic tundra. You’re here to challenge yourself and your vehicle beyond anything you’ve ever done before. Almost hitting a wolf on the Dempster Highway, winching your rally rig out of a snowdrift at the Arctic Circle, and narrowly being sideswiped on the Dalton Highway by an oncoming big rig—these were just a few of the hair-raising moments we faced during our Arctic adventure. This was the 2020 Alcan 5000 Rally. 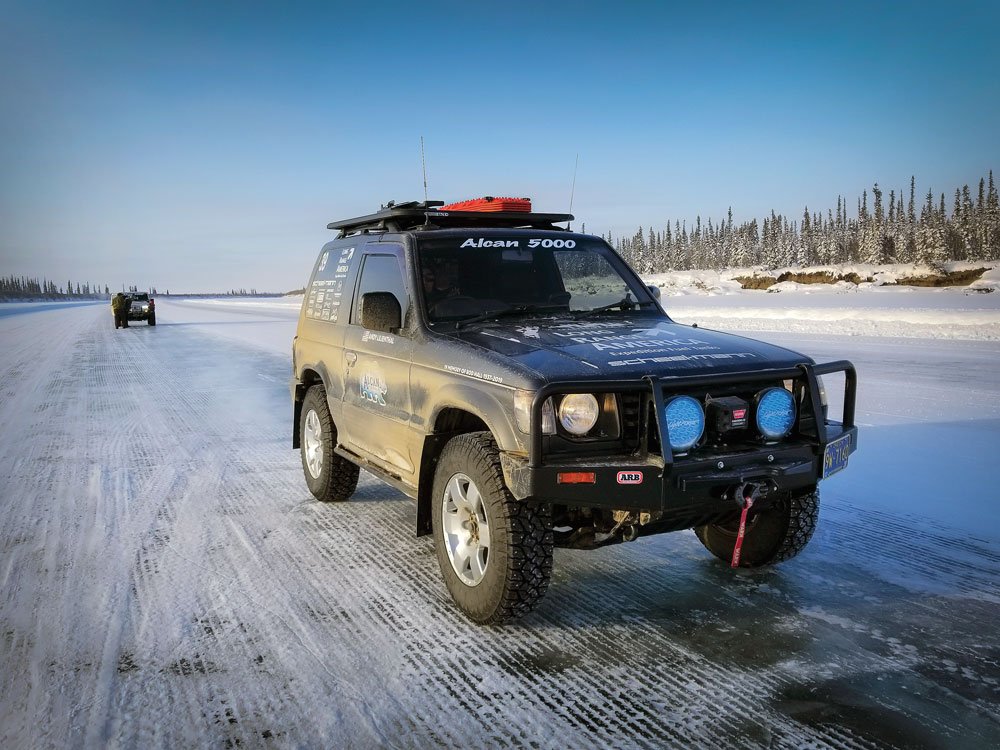 A bucket list item, driving 146 miles of a legitimate ice road to get from Inuvik, NWT, to Aklavik, NWT, and back.

This event showcased extreme weather conditions, long hours of navigation, and driving over ice- and snow-covered roads, as well as body damage and pitted windshields. Additionally, several time-speed-distance (TSD) sub-rallies were held within the main competition—all while covering over 5,120 miles of remote terrain within 10 days.

My husband, Andy, and I were one of nearly 40 teams from across the country vying for the ultimate adventure of snow, ice, and bitter cold. Vehicles of all shapes, sizes, and abilities showed up to rally. Mini Coopers, Subarus, Porsches, Toyotas, and even Jeeps came out to play. A few unique and oddball rigs showed up as well: a 1973 Ford Capri, a 1988 BMW 325ix, and also two Mitsubishis (one of which was our 1991 JDM diesel-powered Pajero 4×4). Each was outfitted with three-peak-rated or winter tires, extra fuel, emergency gear, and auxiliary lights. 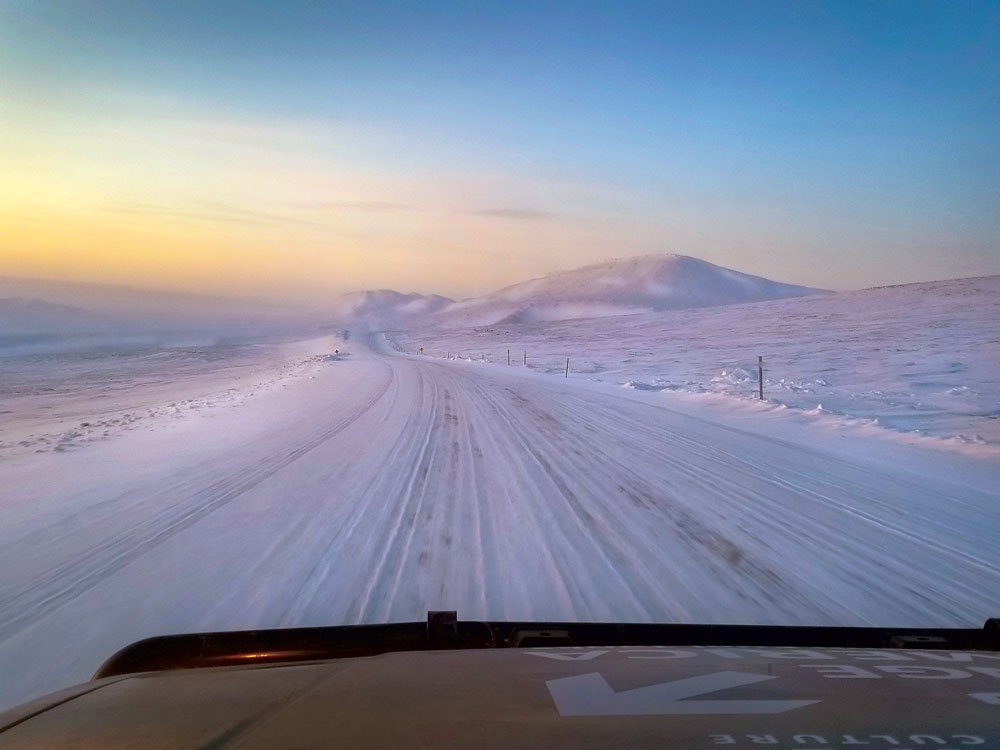 Words can’t describe the pastel beauty of an Arctic sunrise.

This year’s Alcan 5000 Rally started in Kirkland, Washington, and wound its way around remote villages, traveling due north through all of Canada (British Columbia, Yukon Territory, and the Northwest Territories). Ralliers then reached Inuvik, a small city near the top of the world. Then, we dipped south to Whitehorse, the capital of the Yukon Territory, over to Fairbanks, Alaska, and finished in Anchorage, where entrants enjoyed the ceremonial start of the 48th annual Iditarod dog sled races. Additionally, rally competitors could even partake in a fun and festive pre-Iditarod race called the Running of the Reindeer (Garrett Arendt from Team 40 did). Costumes and belly laughs were abundant, as random reindeer scampered through running contestants. 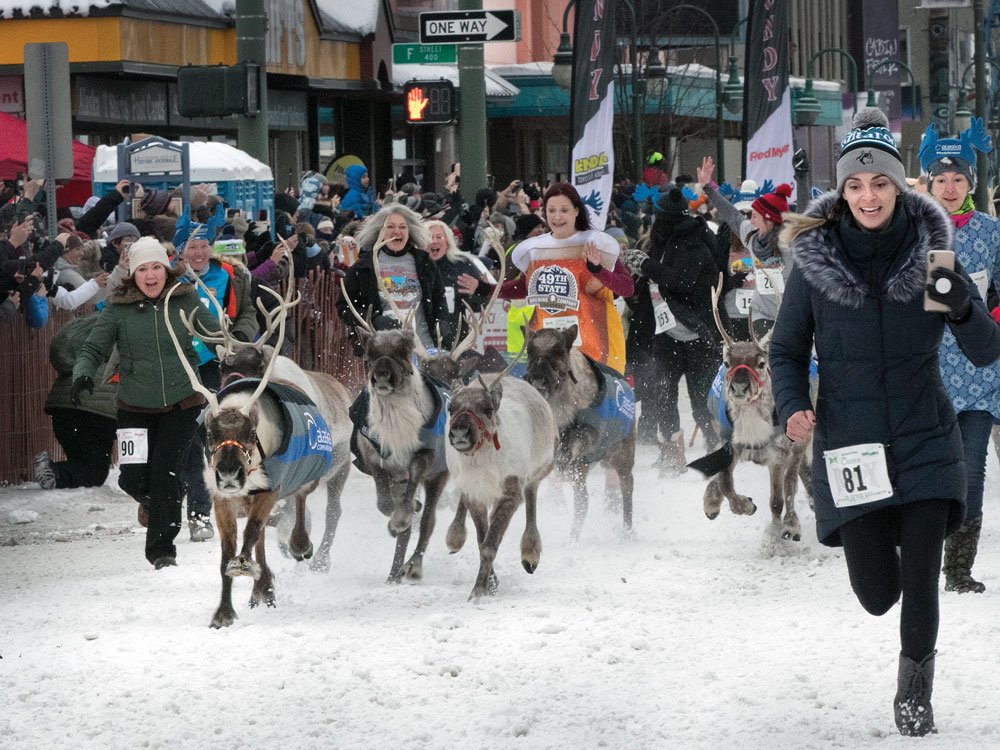 The Running of the Reindeer took place to start the Iditarod race in Anchorage, Alaska.

As each day of the Alcan 5000 progressed, the daily grind from normal life became a distant shadow in the night. Gone were the days of work emails and house chores. Here were the days of variety, extreme challenges, and amazing rewards. Teams were waking up before dawn, suiting up with several layers of clothing, and heading out to rally the unknown.

“The lack of sleep and constant concentration sears deep into your body. You’re here to challenge yourself and your vehicle beyond anything you’ve ever done before.”

Even though our Pajero was slow, we completed all optional trips dubbed “extreme controls.” These included tricky treks from Inuvik to Tuktoyaktuk and the Arctic Ocean, from Fairbanks north to Coldfoot—driving 500 miles on your day off just to get fuel and turn around—and 146 miles via a legitimate ice road to get to the sleepy town of Aklavik, Northwest Territories, and back. Participants completing all extreme controls were awarded the Go Farther accolade. 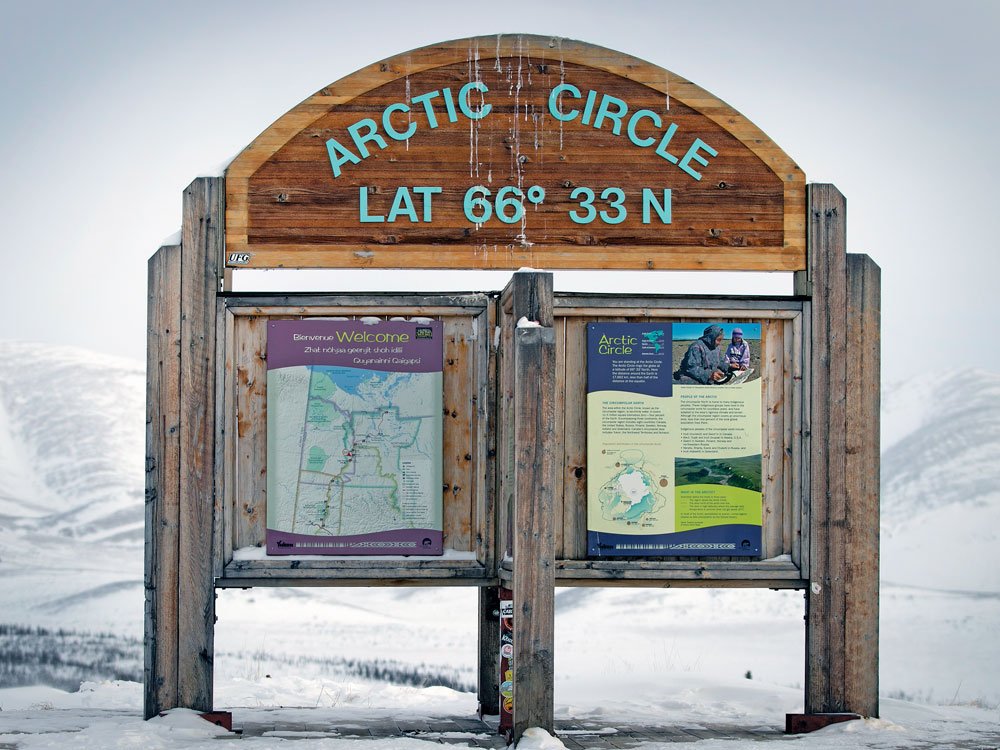 Established in 1984, the Alcan 5000 Rally is held every other year, switching seasons (summer, winter, summer, and so on). Even though this road rally started over 30 years ago, it’s little known, yet one heck of a difficult competition. Different from races, road rallies, or TSD, competitions are typically mandated to run at or below posted speed limits and are held on open public roads. No racing nor carelessness found here—or you’ll be booted from the event. 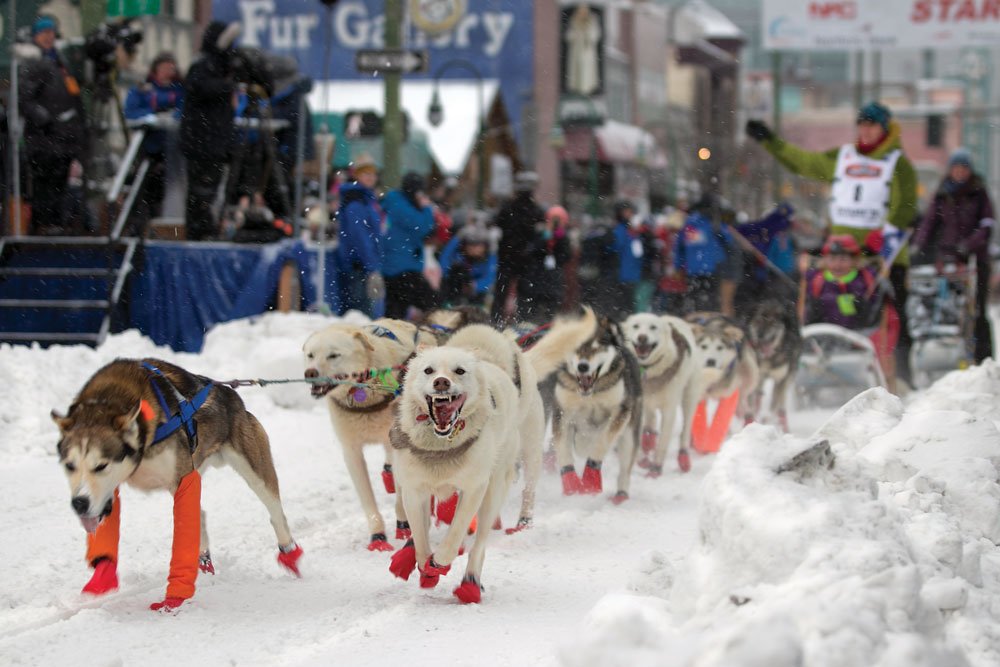 The 48th annual Iditarod dog sled races was an exciting experience to watch.

In addition to our four-wheeled companions and two-legged, sometimes kooky, rally personalities, an abundance of wildlife accompanied our adventure. A herd of big-horn sheep grazed in a valley near Summit Lake (being Alaska Highway’s highest area of elevation). Dozens of wood bison pushed snow aside with their muzzles to feed on morsels below. Moose were everywhere. Thankfully we didn’t see a moose in the road right before a white-out snowstorm, but Team 27, Johan Cardenas and Joe Salvadori, did. “We were having trouble seeing when driving and all of the sudden … boom! We saw a gigantic moose walking very slowly on the roadside,” Cardenas exclaimed. “I literally froze and couldn’t stop staring at it; very exciting to see it in real life!” A red fox, wild caribou, deer, a wolf, and a martin were also witnessed—it was challenging to keep our Pajero on the road while watching for Arctic critters. 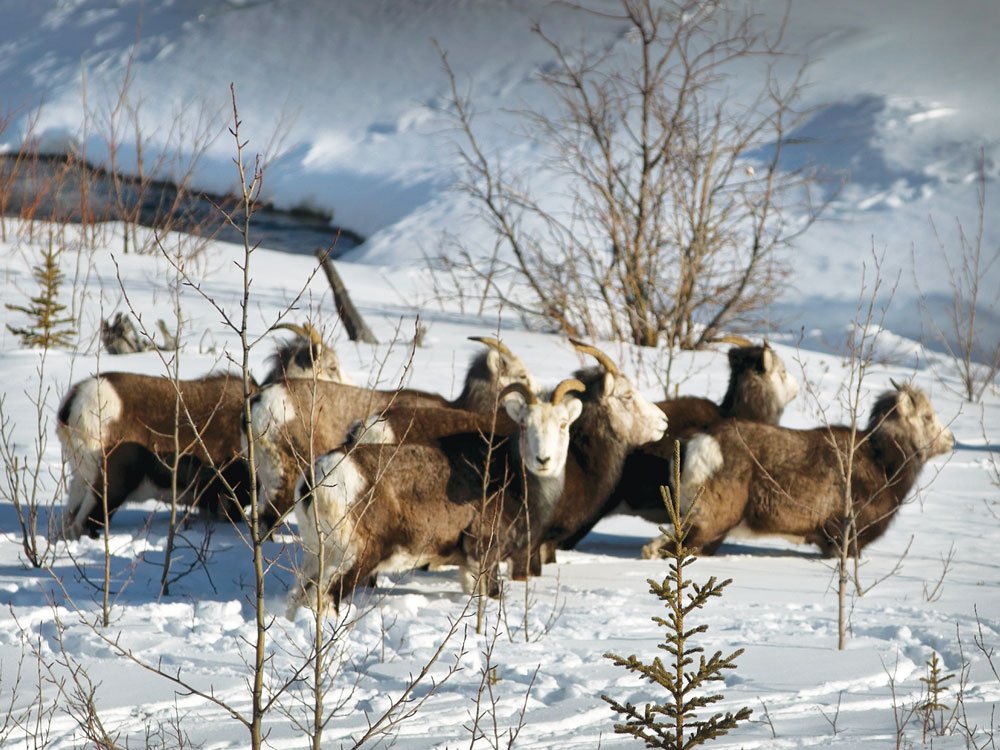 Near blizzard conditions were seen on the Dempster Highway, but thankfully all the ralliers got through before the road closed.

Our Mitsubishi Pajero, aka the “Terra Tractor,” isn’t fast. Admittedly, it’s pretty slow at highway speeds so we mounted a 3-D printed snail atop our rear spare tire for the rally. Even though it lacked speed, it didn’t lack in reliability and personality. Hailing as the only righthand drive of this year’s rally, our Pajero proved solid, steady, and safe. Armed with upgrades like dual Optima RedTop batteries and Webasto Thermo Top Evo programmable coolant heater, our vehicle demonstrated daily starts that rivaled those of a normal day. 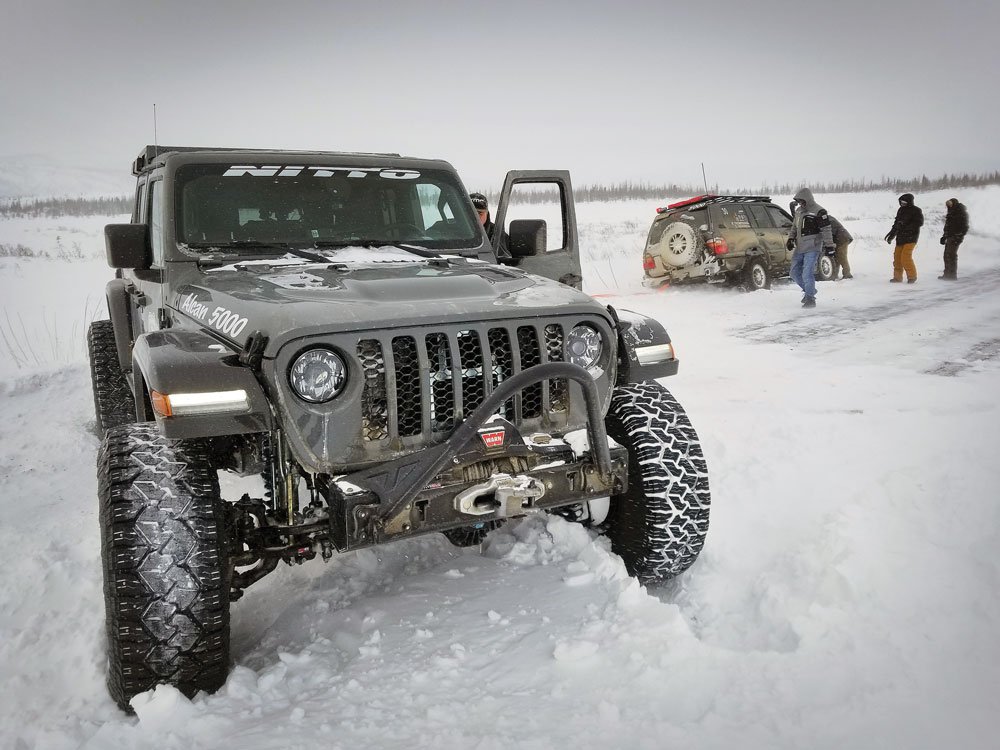 Having proper recovery gear and knowing how to use it helped many get un-stuck during the competition.

In addition to emergency triangles and road flares, the Terra Tractor was equipped with a customized cold weather medical kit from Chiron Remote, a robust Warn recovery kit, along with a Rhino Rack Pioneer roof platform that housed four Maxtrax recovery boards and a DMOS shovel. A heavy-duty ARB winch bumper and Warn M8-S winch adorned the Pajero’s front end for recovery opportunities, and Lightforce auxiliary lights topped it off for improved visibility. Team 30 getting help with recovery on the Dempster Highway.

“Here were the days of variety, extreme challenges, and amazing rewards.”

Fuel range was paramount. Teams were encouraged to have a minimum range of 300 miles between fill-ups. Oregon City, Oregon’s Wanderlust Overland installed a Long Range America Automotive auxiliary tank for us. After the install, the Terra Tractor boasted a mighty 500-mile range. As other teams stopped to empty jerricans in sub-zero temps, we simply pushed a button to allow for 13-plus extra gallons to flow into our main tank while driving. 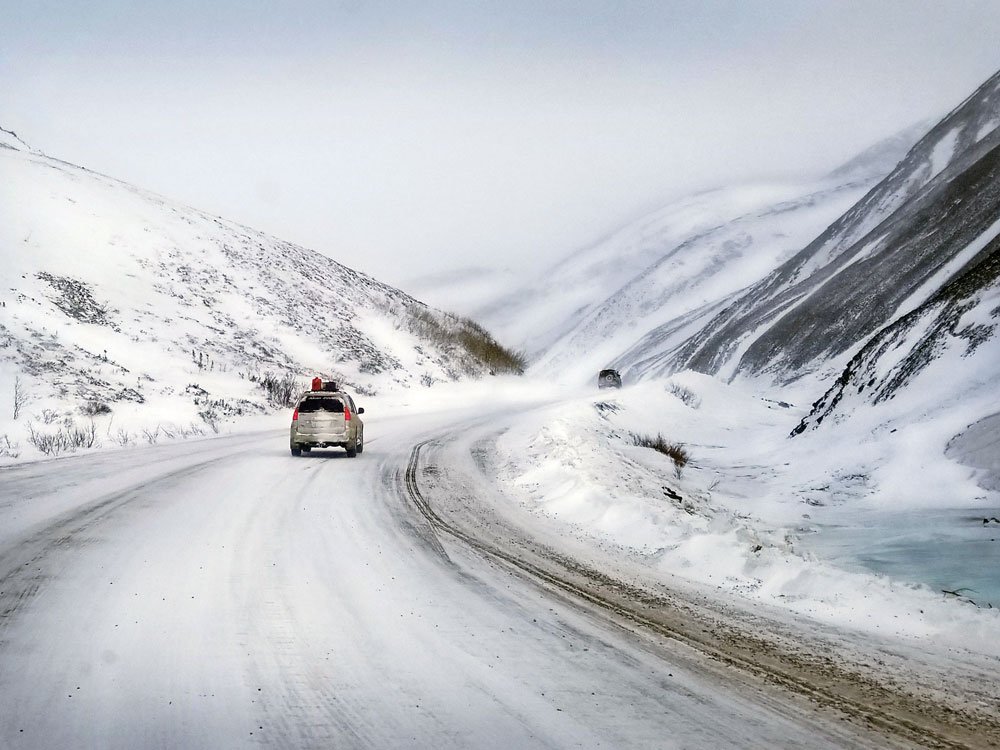 Teams drove through mysterious mountains along route north to Tuk.

Our little Pajero went from the one that possibly could, to one that DID! We stayed on route for all TSDs, finished the rally strong (and in one piece), and completed all extreme controls successfully.

Other competitors fulfilled their dreams: seeing the Northern Lights and the Arctic Ocean, driving on an ice road, witnessing the soft pastels of Arctic sunrises, reaching Tuktoyaktuk and the Arctic Circle for the first time, understanding what -40 degrees actually feels like, as well as experiencing Alaska and the famous Iditarod dog sled races.

Life up north is very different. Vast expanses of nature surround giving, kind, hard-working people. The locals we encountered were very friendly. From the carving artist at the 70 Mile House General Store to the Alaskans who helped us locate the Iditarod race course, it was the people who truly made this trip special. Between the rally group, the locals, and Andy, it was an epic adventure I won’t soon forget. 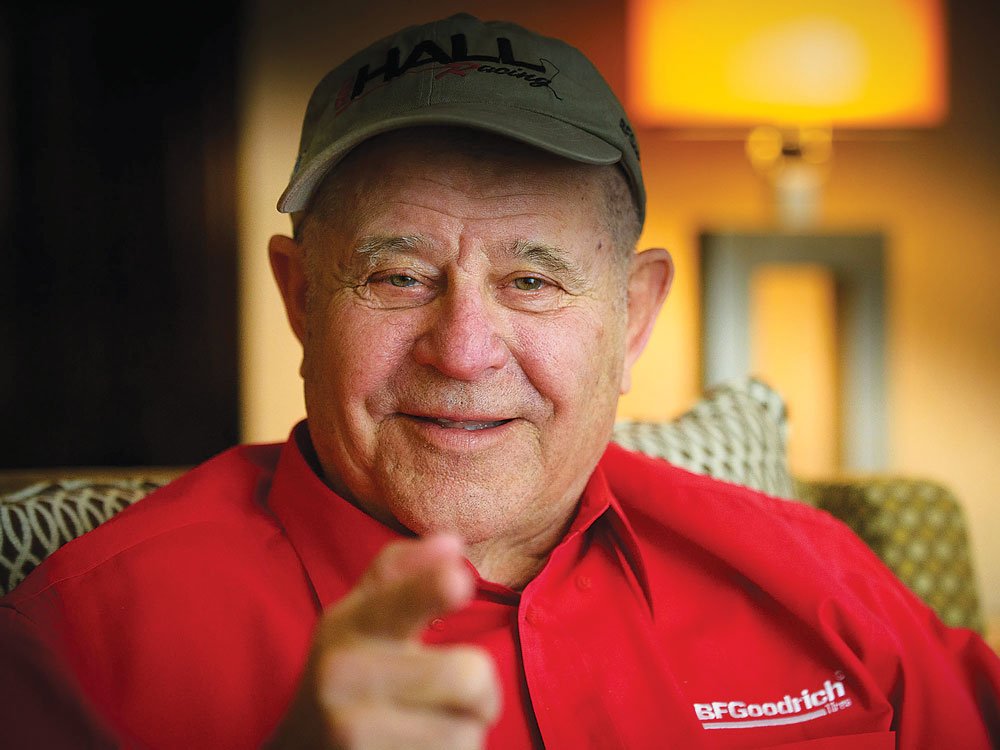 This year’s rally was dedicated to notable racers and Alcan 5000 friends whom were recently lost: Gary Bockman, Jim Elder, Greg Misbach, Paul Oskamp, Steve Richards, Steve Skogmo, Ramey Stroud, and the legendary off-road racer Rod Hall, whose career included approximately 180 race wins with a streak of 35 back-to-back victories in the ’80s. Rod Hall was the only person to race 50 consecutive Baja 1000s. Whereas other teams have a 50 percent chance to finish a race, Hall’s percentage was 50 percent to win that race.

In 1986, Rod Hall competed in the summer Alcan 5000 Rally in a Mitsubishi-built Dodge Raider, similar to the Mitsubishi Pajero we piloted in 2020. Hall’s team was one of only five teams to reach Inuvik, Northwest Territories, that year. 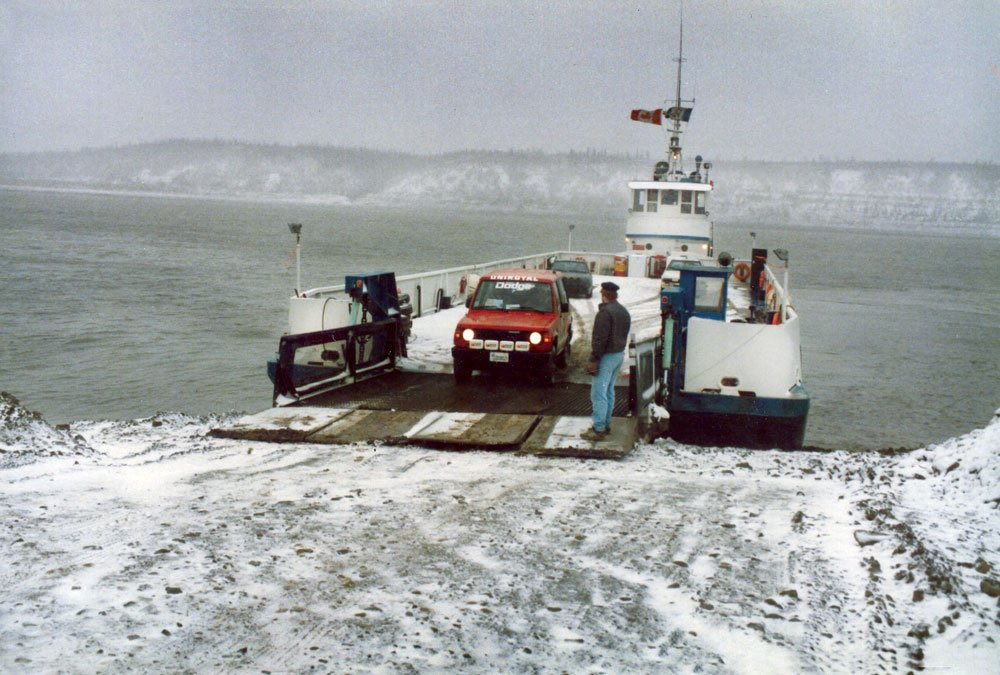 Special memories were shared through this old print photo from 1986 of Rod Hall and the Dodge Raider on a ferry. Another Alcan 5000 competitor shared it with the author and her husband, Andy, at the Anchorage banquet. Photo by Rod Sorenson.

Since Hall’s death in 2019, rally owner Jerry Hines asked if we’d compete in his memory. Humbled, we said yes, and did our best to represent him. Day 5 was dedicated to Hall’s run and after a brutally cold morning, we triumphed and accomplished the same trek he did 30 years earlier.