→ Submit your rig and win a Tread magazine feature of your truck! ←
Get the Magazine
Hiking, Outdoor, Outdoor Adventures, Photography, Uncategorized
Written by Alyssa Gutierrez

It’s National Parks Week, and the best way to celebrate is by showcasing National Parks from around the United States! Today, Denali National Park takes the spotlight. Alaska is the largest state in America, and home to some of the wildest National Parks and Preserves. It’s proximity to the arctic circle has made for some breathtaking and relatively uninhabited terrain that is home to a vast array of wildlife. Denali National Park, which is perhaps the most recognizable park in the state, is located about 240 miles north of Anchorage. 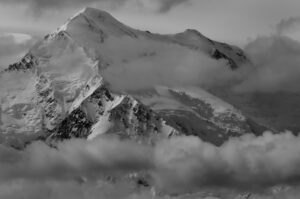 Denali National Park is home to the tallest mountain in North America. Once called Mount McKinley and now known as Denali, this towering mountain provides both breathtaking views, and a distinct challenge for serious climbers. In fact, attempts to summit Denali are well regulated, and mountaineering in Denali National Park comes with serious warnings from the National Park Service. This undertaking is only for those who have extensive experience with climbing mountains, and those willing to take on the challenge as part of a weeks long expedition.

The Power of a Name; From Mt. Mckinley to Denali

The debate over the name of our nation’s tallest peak (and the park it resides in) has dragged on for many decades, since before Denali National Park even existed. As with many natural features in the United States, the mountain had long been named by the native Athabascan people who have lived in the area since long before settlers arrived from the lower 48 states. When the park was established in the early 20th century, two of the main supporters for it’s formation wanted to honor the name given to the peak by the native community, hoping to call it Mt. Denali National Park.

Unfortunately, by this time attempts to climb the peak had been happening for over a hundred years. Americans already new the mountain as Mt. McKinley, which was one of many names the mountain was known by to non-native people in the area. In order to capitalize on that recognition, the park was christened Mount McKinley National Park in 1917.  It would take nearly a hundred years to change the name of the mountain back to Denali. Over the years many supporters of the traditional names for the mountain spoke out. People lamented the dismissal of native traditions. Ultimately, the name was restored in 2015. The Secretary of the Interior was able to officially change the name of the mountain to Denali.

The Big Five and so Much More: Wildlife in Denali National Park

Aside from the views, one of the biggest draws for visitors to Denali National Park is the chance to see spectacular wildlife that remains mostly undisturbed in its natural habitat. There are five mammals in particular that visitors usually hope to see as they travel through the park: 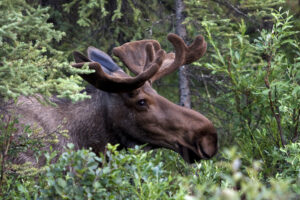 It is very possible to see any of these species while touring the park. Wolves are heavily studied throughout the park, with more and more being understood about the species each year. In fact, this species is so well documented in Denali National Park that you can find an abundance of information about them on the National Park Website. Everything from population data, to audio transcripts of a wolf pack howling, to maps of pack territories throughout the years is available to explore.

Unlike wolves, the bears in Denali are solitary omnivores, who travel together only when a mother is raising her cubs. Visitors can see bears along the road in areas where food sources are accessible. This makes it necessary for guests to be careful and aware of bear safety when they visit the park. Caribou and moose live in their different habitats throughout the park, with moose living mostly near bodies of water in forested areas. Up in the higher elevations, Dall sheep live up on ridges and slopes, where they are also studied by park officials.

Know Before You Go 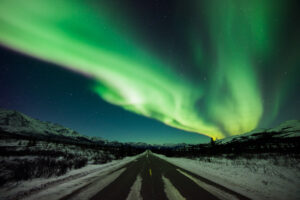 Before you decide to visit Denali National Park, there are a few things to know. In many national parks, visitors are able to drive the roads in their own personal vehicles. While this allows guests to have more autonomy within the park, it also increases the risk of issues with wildlife and traffic jams. In Denali, there is only one road which is usually open in the summer season; from May 20th-mid September.

The road stretches 92 miles into the park, and is only paved the first 15 miles. The paved section leads from the entrance of the park to an area called Savage River. From Savage River onward, visitors can travel deeper into the park on buses, or by hiking or biking. Bus trips are a great way to see the views in the park, while also benefitting from commentary provided by drivers who expertly traverse the road. Be sure to check conditions before you arrive as there may be closures due to weather conditions, rock slides, and Covid-19.

In the Alaskan wilderness, Denali National Park remains both wild, and ready to explore. Respectful visitors willing to tour the park while being sure not to disturb the wildlife are in for the trip of a lifetime. There are vistas to discover, wildlife to view, and new experiences to be had in this arctic-adjacent environment. From boreal forests to the alpine tundra, this relatively untouched wilderness will dazzle visitors from the lower 48 states. It definitely deserves a spot on your bucket list!