ONE MAN’S DREAM: THE MUSEROAMER 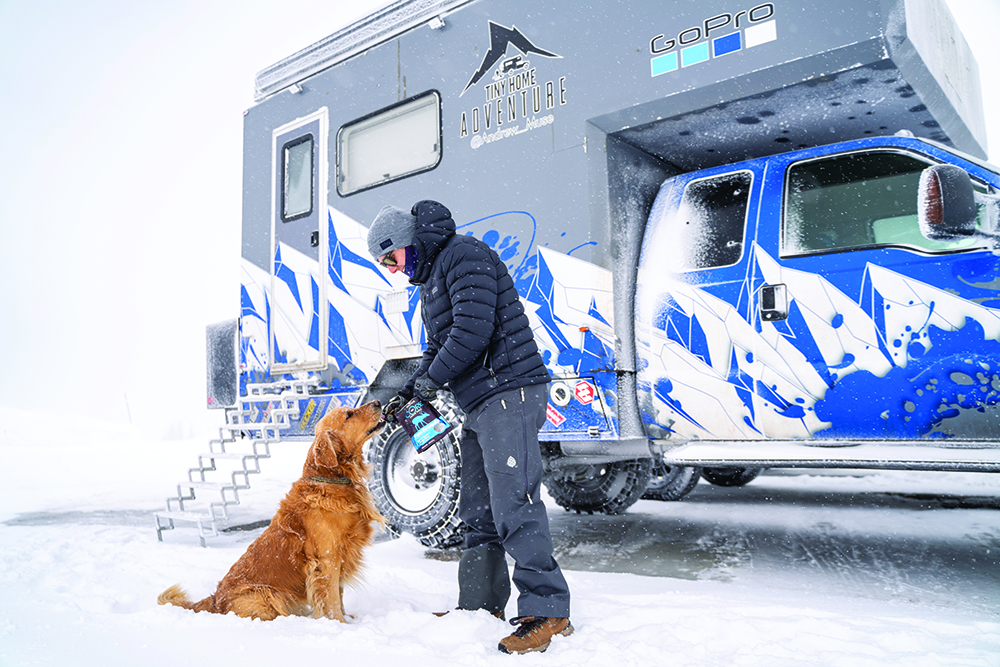 Living a life receiving steady paychecks and owning a house with a white picket fence is the ideal happy life for some. The security of well-known surroundings and money in the bank envelop them as they lead their lives in familiarity.

But, for others, living on the road offers random happenings, unexpected challenges and meaningful moments beyond their wildest imagination.

Andrew Muse is one of these. He’s proof that letting loose from the everyday grind can be more fulfilling.

“It started with a $200 VW Golf a co-worker sent me. Then, a Chevy Astro van for which I built a platform for a small bed and storage and a Nissan Titan with a 1976 truck camper that I bought for $500,” Muse said. What followed was a Ford E350 4×4 and the self-built MUSEROAMER, equipped with a Ford F-550.

After graduating from a high school in Massachusetts, Muse moved west.

I wanted to build the absolute best vehicle for my needs. I took the EarthRoamer concept and tried to pull it off for a $30,000 budget. “I’ve always loved pushing myself physically and being in the mountains. It’s also something I’ve been naturally good at,” he mentioned. In fact, most of the major decisions he’s made in life have revolved around “high-elevation adrenaline.”

After careful thinking, Muse headed to Utah in pursuit of living at high elevation locations.

“I got a job ski-patrolling in Park City,” he stated.

In order to live on a ski patroller’s wage, Muse, along with his adventurous spirit, ended up living in the cheapest accommodations he could find. Inevitably, it meant living in a vehicle to save money for gear and experiences.

“I was inspired to build the MUSEROAMER because I’ve been living in vehicles off and on for the last 15 years now,” Muse explained. “I wanted to build the absolute best vehicle for my needs. I took the EarthRoamer concept and tried to pull it off for a $30,000 budget.”

After a progression of vehicles, he discovered the reasons he liked living out of them.

“I’ve grown a lot living out of my vehicle. I learned how to live efficiently.” During that time, he realized he didn’t need “a bunch of stuff all the time.” 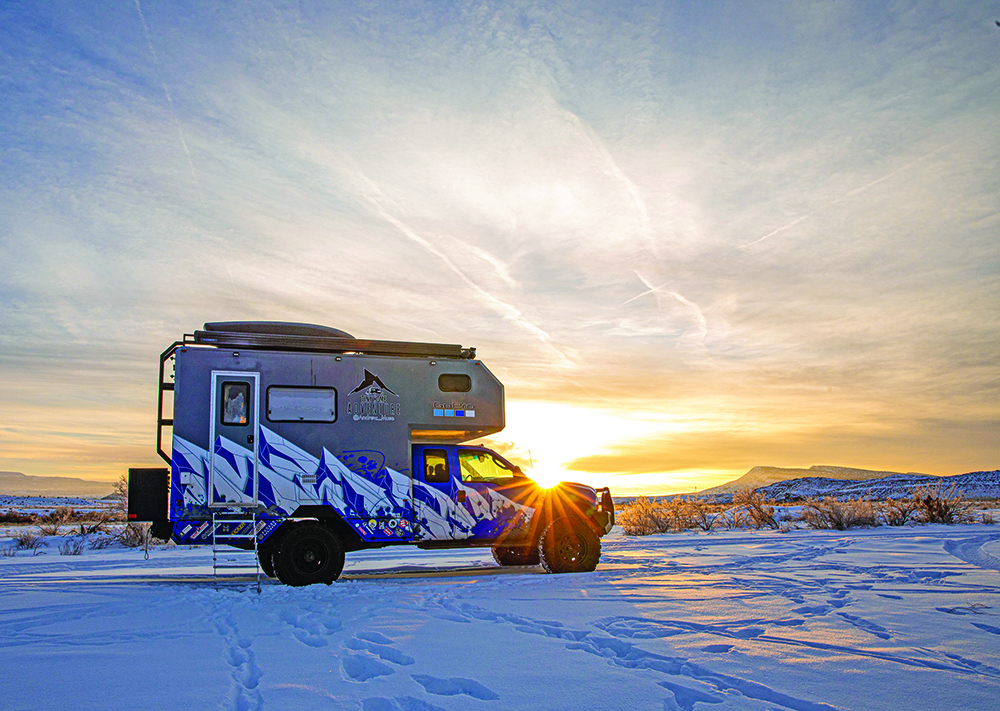 Sunrise after the first proper night in the roamer was cold and crisp!

It took nearly two years to finish the MUSEROAMER. The initial project duration of three months and 16-hour workdays quickly went by the wayside as his effort more than doubled in dollars and took more than six times longer than anticipated.

As a result of all that time, money and effort he poured into his mobile basecamp, Muse has a lot to be proud of with the MUSEROAMER. One of his favorite modifications is the pass-through opening from the F-550’s cab to its camper shell.

“The building process kicked my butt. I was delusionally optimistic on timelines the entire way,” he noted. “At times, little things I thought would take a couple of hours took days.”

Over his budget and past his deadline, Muse consulted with his girlfriend and inner circle of friends on the project. “They said that it was going to cause more headaches than it was worth,” Muse stated.

Against everyone’s advice, however, he completed the project … and has had no issues ever since.

Muse’s 2004 F-550 is equipped with a custom-built camper shell and pass-through. It features a multitude of modifications and updates.

Its 6-liter, Navistar turbo-diesel engine produces 325 horses and has had a good amount of maintenance work done to keep it in tip-top shape.

The MUSEROAMER also has many upgrades. For instance, Buckstop springs with Fox shocks round out the front suspension, while the rears include a 4-inch Buckstop lift and Bilstein shocks. 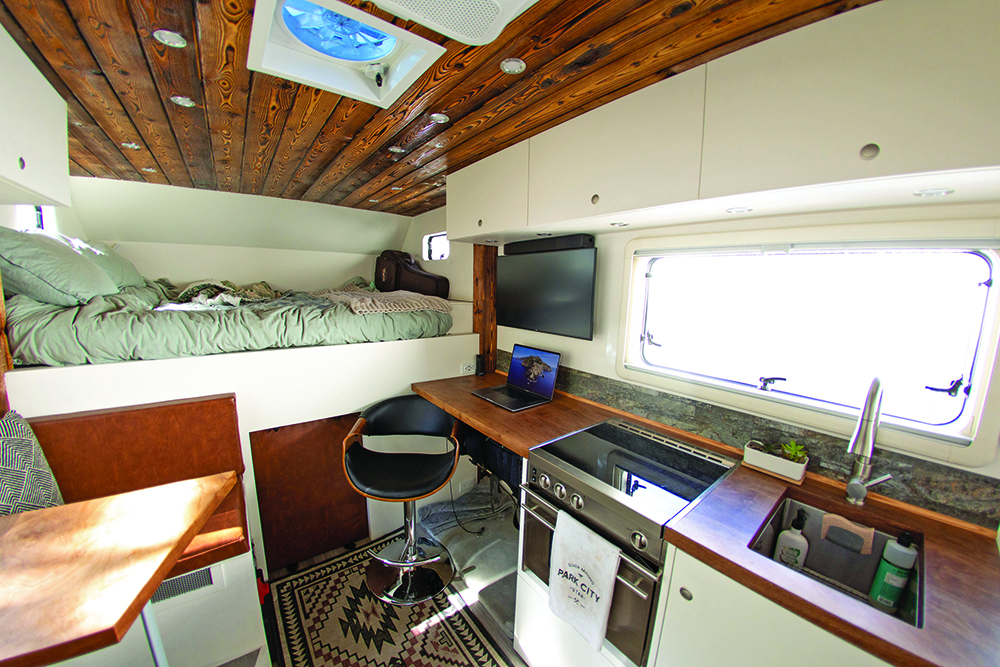 The desk space is one of Muse’s favorite features of the MUSEROAMER’s living space.

“The MUSEROAMER is my home and mobile command center,” Muse said. (He runs a production company and is a full-time traveler.) “I wanted something in which I could bring along as much gear (camera/toys) as possible while living comfortably and working efficiently,” he explained.

“I have gear for kiteboarding, surfing, climbing, mountain biking, paddleboarding, skateboarding, snowboarding, paragliding and speed flying, as well as a unicycle (although Muse admits he doesn’t yet know how to ride it).”

The only thing Muse would have changed on the MUSEROAMER is to have radiant floor heating installed.

“The water tanks are in the subfloor—which is fine, because it’s very well-insulated, 2-inch foam board. But once it gets below about 10 degrees, I start to get freezing issues.”

Muse learned he needs to be around people but often needs “alone time” in the mountains.

“Snowboarding has taught me to stay calm and focused, even when the moments ahead are critical to my safety,” he said.

Muse’s favorite places to take his adventure 4×4 are anywhere that will let him camp nearby. Nevertheless, he’s most excited to take his vehicle to Alaska’s Thompson Pass. It’s a 2,600-foot-high gap in the Chugach Mountains northeast of Valdez, making it the snowiest place in the state.

It took nearly two years to finish the MUSEROAMER. The initial project duration of three months and 16-hour workdays quickly went by the wayside … 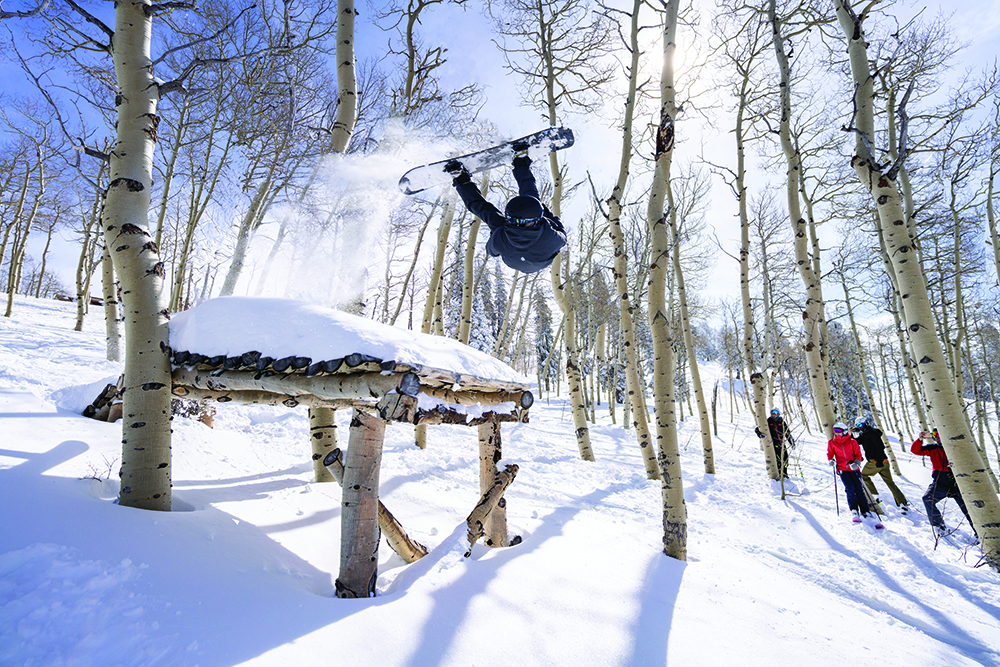 A step-up to a front flip at Powder Mountain, Utah

“Thompson Pass is an incredible mountain pass that has access to some of the wildest mountains in which you can park and play,” Muse said with a grin.

Along with Thompson Pass, Muse loves to check out other areas. “Powder Mountain still has mom-and-pop, East Coast vibes with super-fun terrain features.” Even though the resort doesn’t allow overnight parking for RVs, Muse discovered that if he keeps a small footprint, people don’t seem to care. 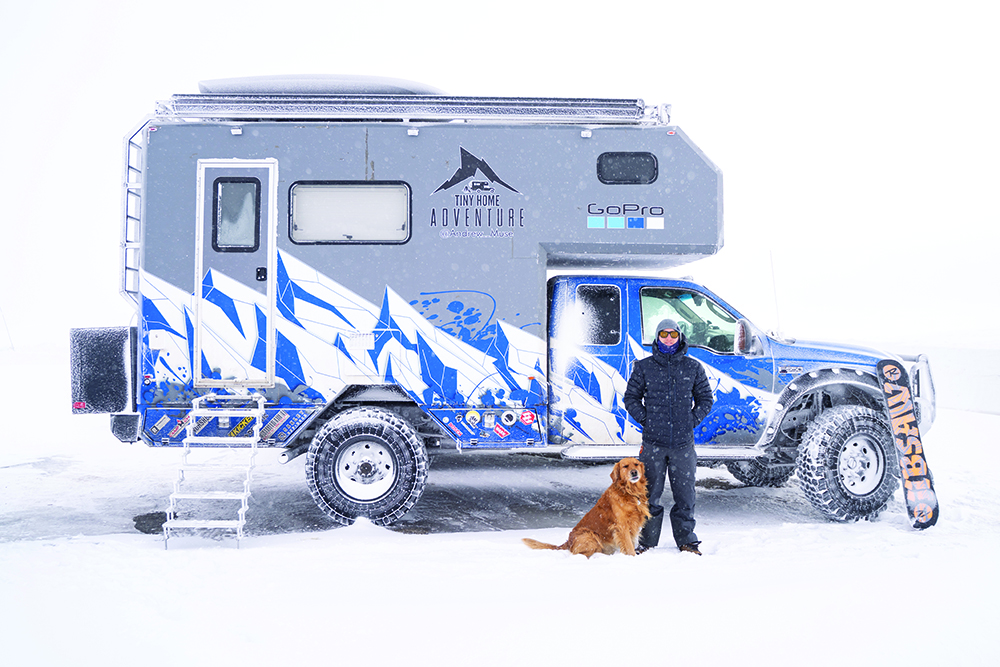 Camping at Skyline Drive for some skiing

“I was camped just a two-minute drive from the main lot, made a solid breakfast and coffee and was in the lift line before the first chair,” he stated. “We got about 10 inches of snow overnight, which made the riding phenomenal.” Muse, once an athlete for Rossignol, was riding the company’s Jibsaw snowboard—“a really fun, all-around board,” he pointed out. 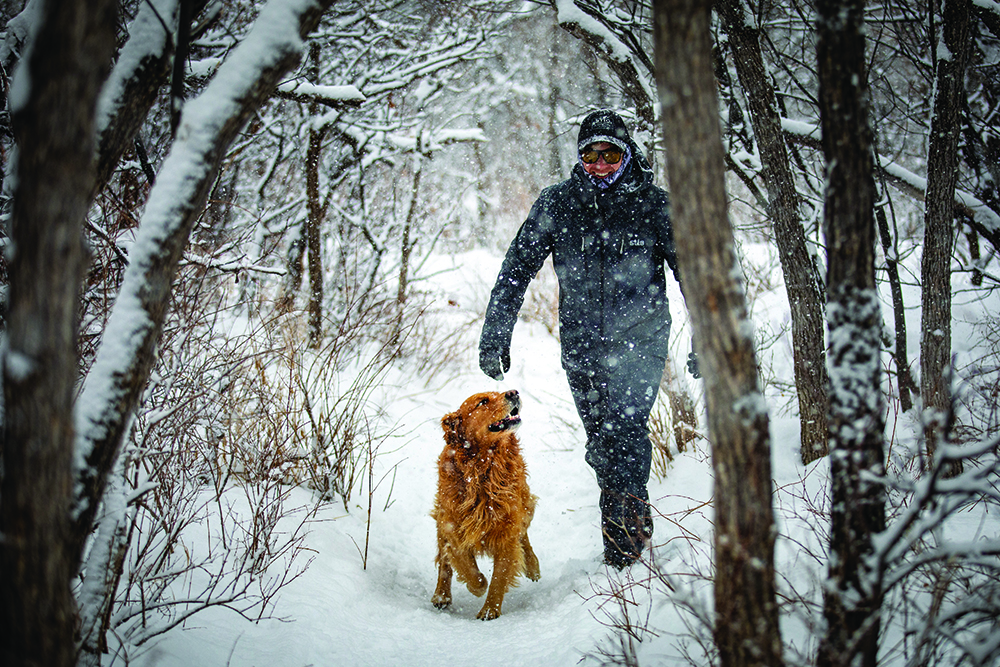 Muse and his golden retriever, Kicker, often go for a nice walk through the woods, no matter the conditions. (Photo: Ashley LaMarre)

To Muse, there’s something nice about not having to battle traffic up a mountain pass in the morning. He most appreciates being able to wake up, make food and go ride.

Not All Fun and Games

It’s not as easy to “park and ride” as one might think. Muse says it can be very challenging to find places to stash his rig in a ski town.

However, the biggest issue was breaking his leg just two weeks after finishing the roamer and two weeks before heading to Alaska.

‘I wanted something in which I could bring along as much gear (camera/toys) as possible while living comfortably and working efficiently.’ 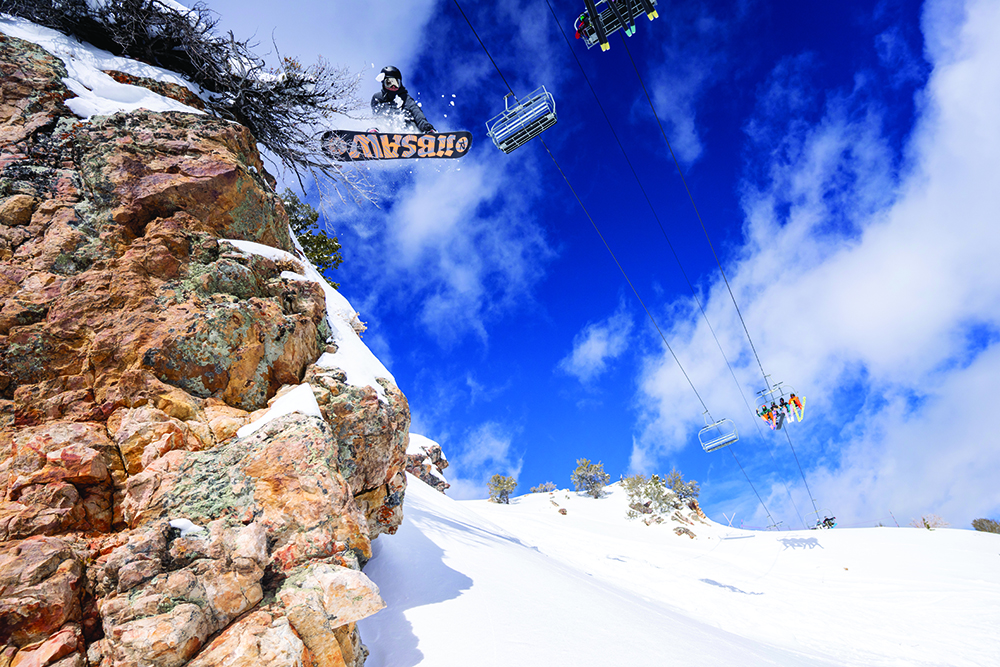 “After two years of working my butt off to build the roamer, it was pretty devastating not to be able to go,” Muse said.

He also traveled with another filmmaker, who helped him with his production work.

“Unfortunately, my girlfriend of three years and I recently split up after about one and a half years living in the MUSEROAMER together.”

Right now, his travel partner is his dog, Kicker, a 5-year-old golden retriever. 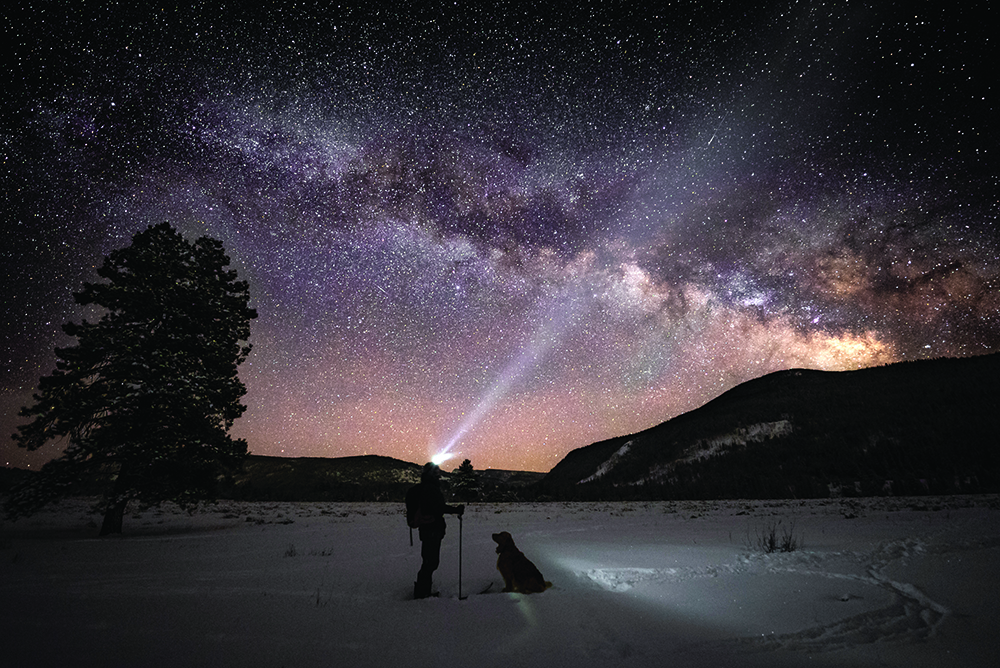 This place is very special to Muse. It’s where he buried Booter, his first dog. 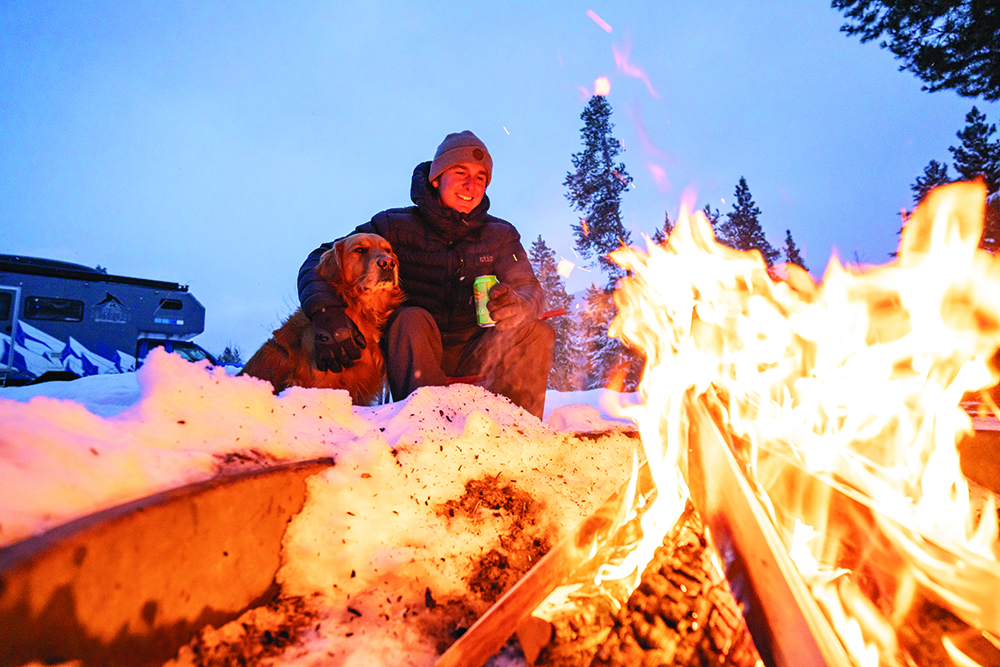 “I got him when I was living in the E350 van, just before driving to Alaska for three months. He’s incredible!” Muse exclaimed. Kicker has been “solid” in the mountains and is very calm, kind and loves living in the MUSEROAMER.

Muse has the following advice for those who want to pull up roots and experience a nomadic lifestyle, especially to enjoy winter sports: “You only live once. If you want to make it happen, you need to work hard, save money, and actually make it happen. The hardest part is having dry clothes … but there are all kinds of creative ways to make it work.”