For those who chase adventure and the rush of adrenaline, California becomes a natural place to call home. For Ohio native Mark Krumme an opportunity to ride motorcycles, race cars, and experience what California had to offer became too good to pass up. In 2012, a friend of his had a room available to rent in the highly sought-after city of Venice. Located only an hour or so away from a racetrack gave enough reason for Krumme to make the trek out West.

With his trusty Acura Integra Type-R and 1992 BMW 325IS in tow, he spent his time at the local racetracks honing his skills behind the wheel. Motorsports isn’t a cheap hobby and as his savings started to dry up, he knew it was time to find a job. He was quickly offered a position at a local automotive dealership, but just as he was about to take the position, a text came through that would change the trajectory of his life. The text was about a job opening at the suspension company, Eibach—a great opportunity that felt perfect for him.

“He wanted a lightweight and adaptable vehicle that was prepared and capable for an off-road excursion at a moment’s notice.”

All the time spent at the racetrack wasn’t wasted. During his time there, he had met a few of the guys from Eibach who realized Krumme’s background and profound knowledge of suspension lent him to be a great fit for the company. He began the next stage of his career as a sales rep for the suspension brand, and in 2017 he worked his way to the position that he holds today as the North American head of marketing.

He immediately knew he wanted something that could keep up with his Jeep buddies through the trails, but he had a few specific needs. The goal with the truck was to build something he could drive daily, capable to tow his race cars and transport his motorcycles, as well as have strong aftermarket support. Having previously owned Tacomas, he knew exactly what configuration he wanted and the hunt began. 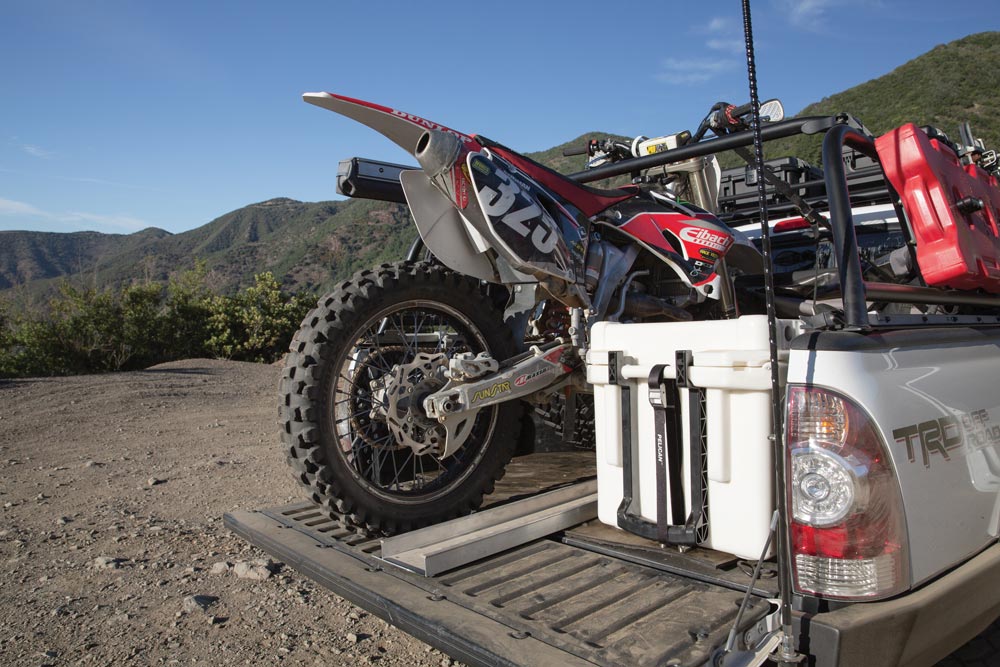 This pickup is built to handle the grind of a daily commute, weekend off-road adventures, as well as the occasional tow.

Krumme was on the lookout for a 2012 or newer Tacoma double-cab, shortbed, 4×4 TRD Off-Road with reasonable mileage in white. These specs proved hard to find at a fair price, especially in California. All of the vehicles he found had high miles, were in bad condition, or were simply out of his budget. As luck would have it, while leaving Road America in Wisconsin for an event and on his drive down to his parents’ home in Cincinnati, he decided to do a search in the Midwest and at a Chevy dealership in the middle of Kentucky he found his truck—a 2014 Toyota Tacoma TRD Off-Road. He convinced his parents to drive him to the dealership as it was just the truck he was looking for. Krumme adds, “It’s perfect. It’s got 40,000 miles. They wanted 25 grand for it and everything lined up perfectly.”

He skipped his flight home and drove the newly acquired truck back to California to begin the build process to create the ultimate “do anything truck.” He would soon find a way to keep the truck versatile enough to perform and function as a daily driver. He wanted a lightweight and adaptable vehicle that was prepared and capable for an off-road excursion at a moment’s notice. 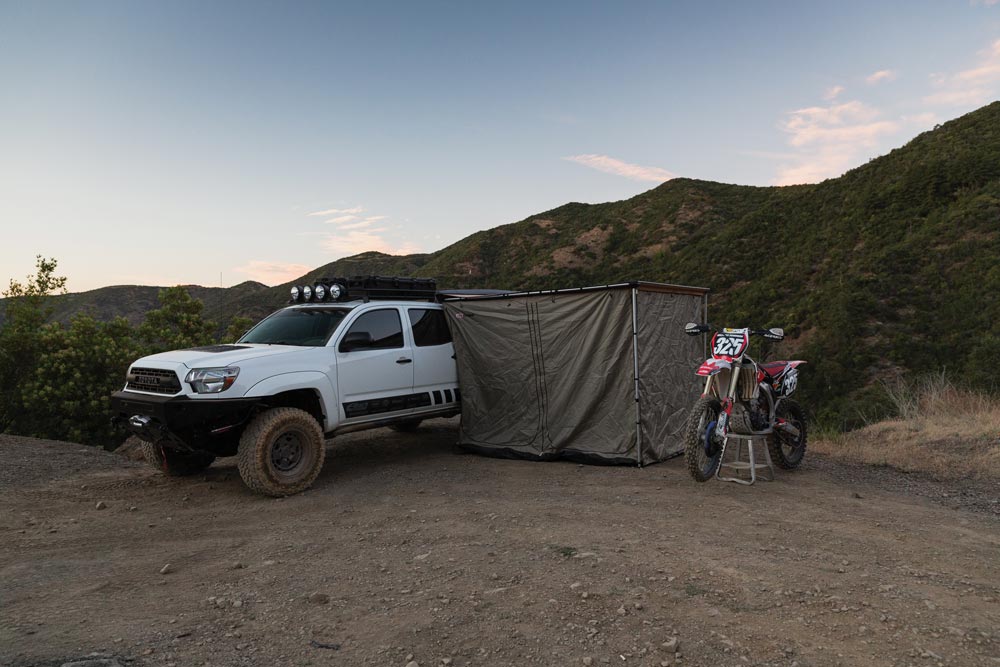 Mark Krumme utilizes an ARB awning and awning room in lieu of a rooftop tent.

The first modification was to install the Magnuson MP90 supercharger system paired with a URD “Stealth” 2.85-inch pulley for the additional power needed for towing and tackling the trails. Even more horsepower is provided via an AEM 340LPH fuel pump and host of AFE parts, including a GT intake system, twisted steel headers and Y-pipe, and a Mach Force-HP exhaust. An HP Tuners MPV12, provides the ability for scanning, diagnostic, logging, and calibration for increased performance.

“Because this truck is built to handle everything, I had to come up with a solution to allow maximum travel and compliance on the trails, but also control the truck on the road when loaded and towing,” Krumme explains.

Part of his job requires him to help facilitate development on Eibach product, which includes the use of his own truck. Through development and testing, he was able to install a set of prototype 2.5-inch remote reservoir coilover shocks with just the right amount of rebound and compression to control his vehicle over g-outs, while keeping things plush over the rough terrain. He paired this with Eibach ERO coilover race springs. Dirt King Fabrication ball-joint upper control arms were installed to reduce the stress on the joints due to the lift and allow for proper alignment and improved handling. 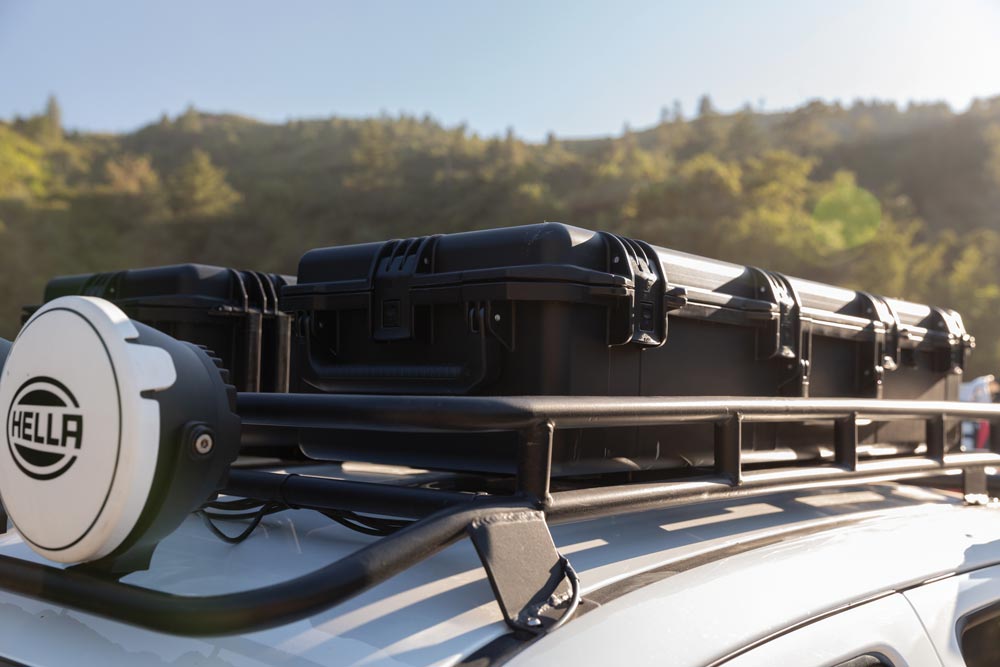 The rear suspension was not ignored and a SumoSprings system was installed for towing and hauling and can be replaced for a smaller Wheelers Superbump for full articulation when it’s time to hit the trails without the need for any special tools, lifting the truck or even crawling underneath it. Additionally, Icon RXT Multi-Rate Leaf Springs were installed to help increase ride comfort.

Krumme adds, “Most people know Eibach as a lowering spring company but we’re so much more than that. We’ve been playing in the dirt for over 30 years, winning championships across the globe. What was once just off-road springs, has now become a full line of truck shocks and coilovers. We engineer, test, and manufacture our parts here from start to finish and I get the opportunity to put them through the wringer.” 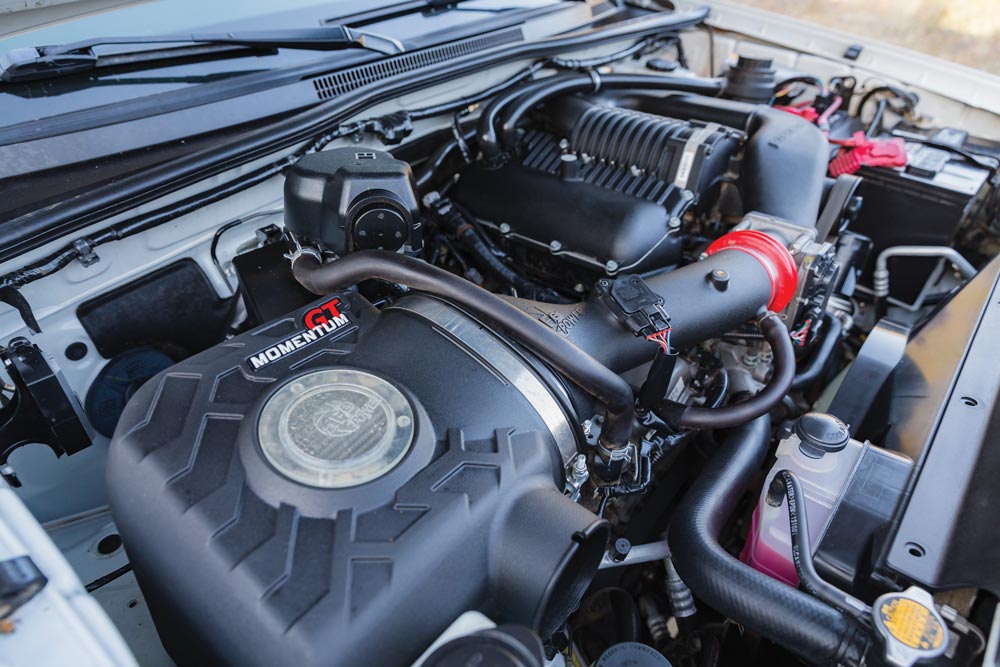 A Magnuson supercharger system coupled with an AFE Momentum GT air intake add plenty of oomph to the Tacoma’s powerplant.

Krumme certainly is an expert in suspension and understands the balance between modifications. One update to a component can affect the performance of another in either a positive or negative way and each setup varies for daily driving, off road, and even for towing. He opted for a set of 16×8 fifteen52 Turbomac HD wheels wrapped with 265-75R16 Nitto Trail Grappler M/T tires. For enhanced traction, he elected to install ARB air lockers and an ARB twin air compressor. 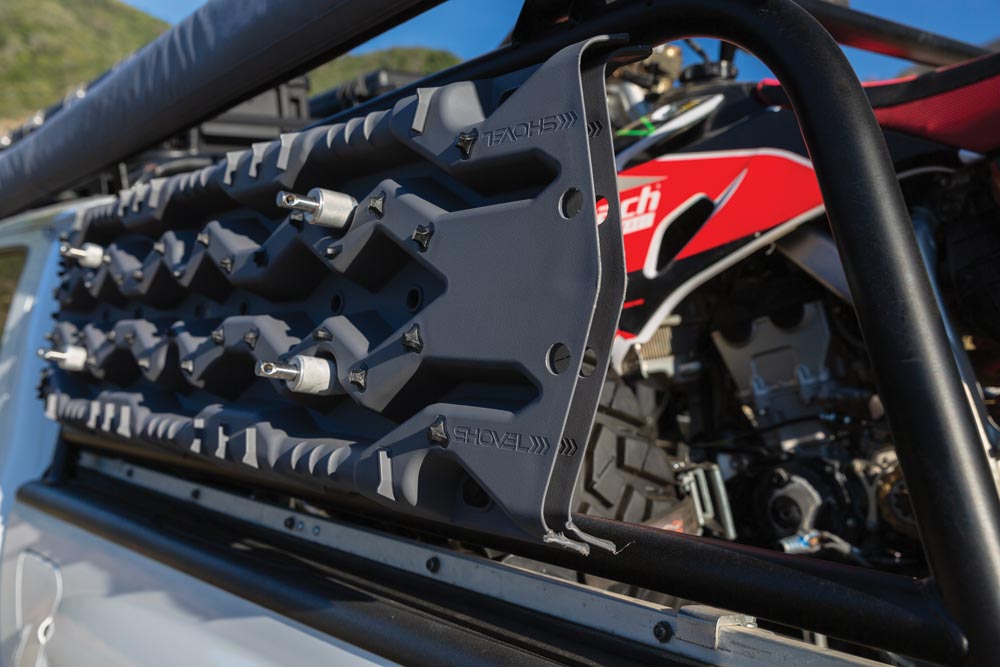 Off-road essentials such as a set of ARB Tred Pro recovery boards conveniently mount to the bed rack.

For protection while he’s out crawling, a Pelfreybilt aluminum front bumper was installed along with a pair of Hella Micro 70 LED lights and a Warn 9.5XP-S winch and Epic winch hook. A Pelfreybilt hi-clearance rear bumper and Demello Offroad sliders aid to protect his vehicle. A host of recovery products complete his preparedness, including an ARB recovery kit, ARB Tred pro-recovery boards, and a Hi-Lift X-treme jack.

For extra lumens, at night, a Hella Rallye 4000 Compact LED bar has been added to the BB Fabworks custom roofrack. The roofrack also houses a Pelican iM3220 Storm long case for tool and gear storage.

The Tacoma was fitted with a set of prototype 2.5-inch remote reservoir coilover shocks to keep the ride plush over rough terrain.

The cabin has been outfitted with an Autometer boost gauge and ES wideband PRO AFR gauge housed in a Cravenspeed Flexpod gauge mount. He also custom-mounted overhead a Switch-Pros SP9100 Power Panel System. Hidden in his armrest is a Midland 1001Z CB Radio, a Pelican R20 Ruck Case, and Pelican headlamp. He’s also added a Pelican R40 Ruck Case and Pelican 1500 EMS Protector Case in the rear seat compartment to store his belongings for trips.

“The first modification was to install the Magnuson MP90 supercharger system paired with a URD ‘steath’ 2.85-inch pulley for the additional power needed for towing and tackling trails.”

One problem that Krumme faced with his all-purpose vehicle was the need to haul a motorcycle in the bed, safely store supplies in the bed, including a Pelican cooler, while still having an overnight camping option. He couldn’t fit a rooftop tent in the bed due to the motorcycle and didn’t want to mount one on the roof as its the highest point of the vehicle and would negatively affect the suspension and vehicle dynamics. So, he opted for an ARB awning and awning room. He needed a bed rack to mount it on, but still required the full use of the bed. He put on his design hat and sketched a rack with a quick release, removable crossbar to help hold the motorcycle in place, and allow the Softopper to fit. Brent at BB Fabworks brought the sketch to reality.

For Krumme the joy is in the challenge and showcasing the capabilities of his TRD Off-Road. With a few trips planned, including attending his first FJ Summit event, he’s sure to get his adrenaline fix much like the story he told of one of his most memorable experiences. 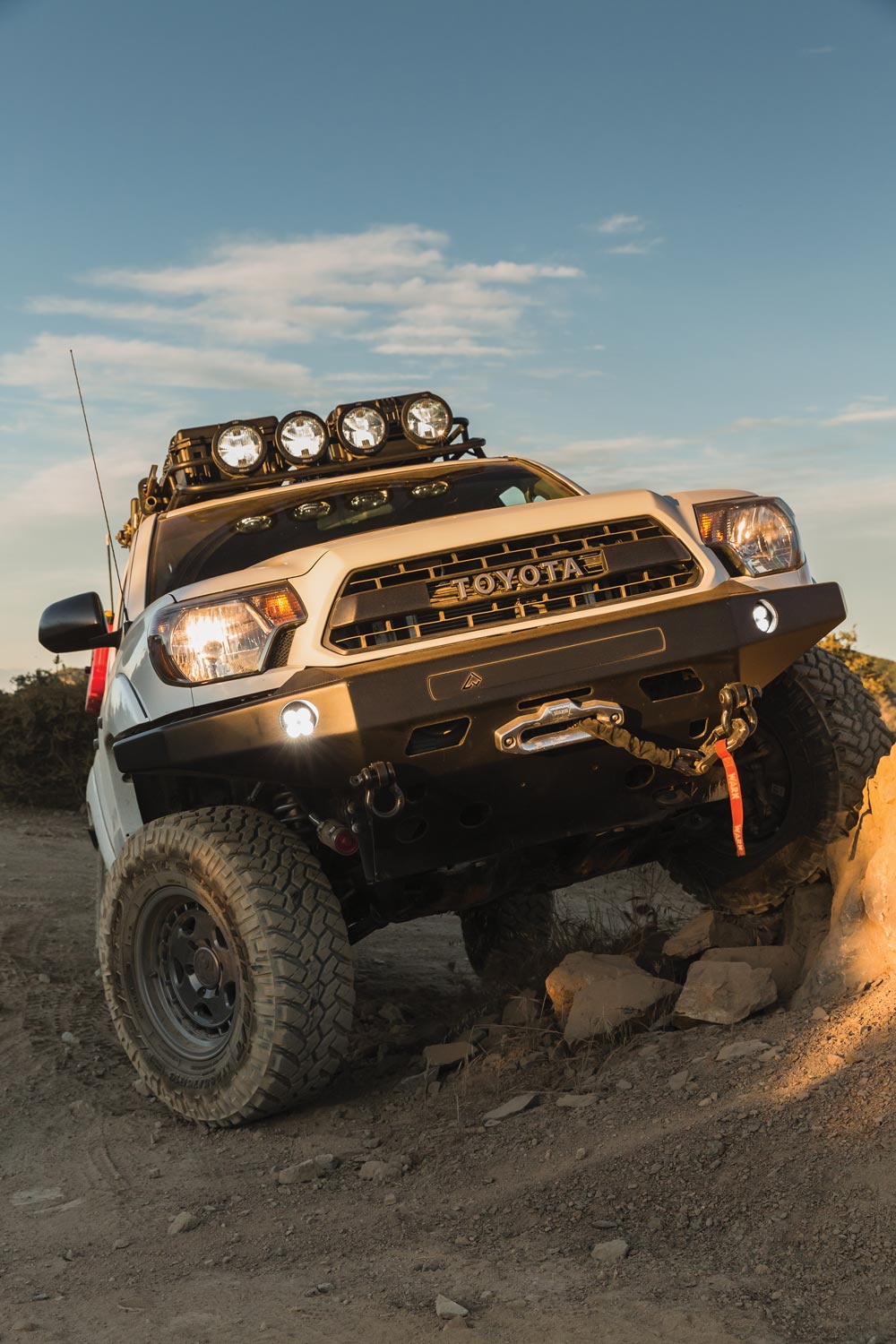 “[Eibach] organized a trail run for a group of customers, team members, and industry friends. I was the leader of the first group, and as we came up on the first obstacle there were a few rigs already doing their best to make it up. As they were blocking the path, all we could do was watch until they made it up, or decide to skip the obstacle. After a few tries, he conceded and gave us space. It was my turn and I was confident I could make it up with no issue. As I pulled up to the obstacle, he came over to the window and said, ‘You’re going up this?’ I replied, ‘Yup’ … without hesitation or even a slip of the tire, I started climbing the obstacle. Slow and smooth we worked our way to the top. We could hear his spotter at the top asking his buddy what was on the truck, then making fun of him for not making it. The Tacoma impressed that morning.”

“Krumme certainly is an expert in suspension and understands the balance between modifications. One update to a component can affect the performance of another in either a positive or negative way and each setup varies for daily driving, off road, and even for towing.” 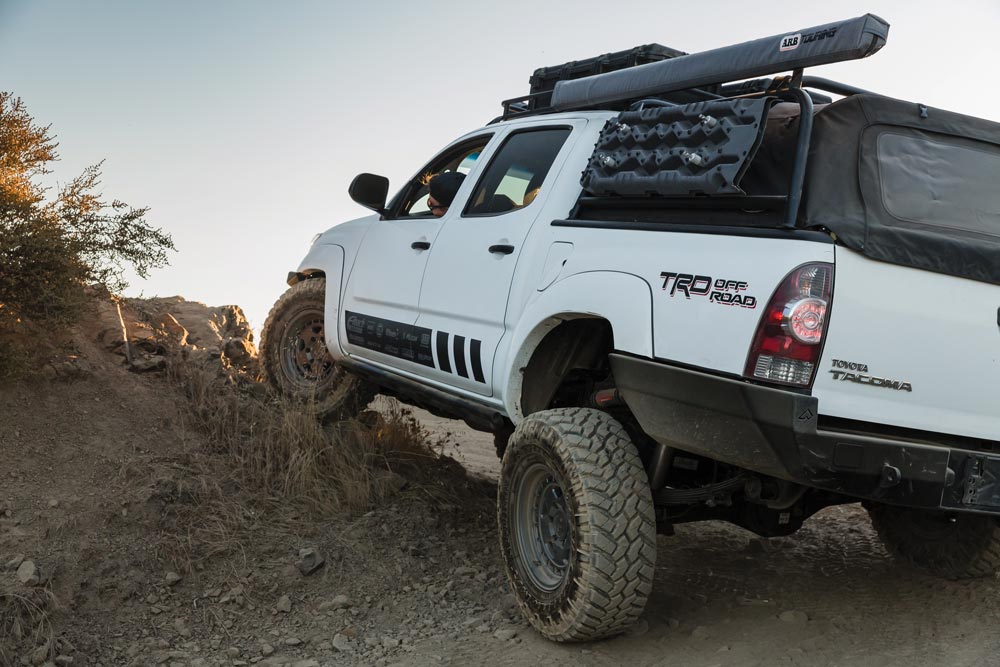 Krumme enjoys showcasing the suspension capabilities of his Tacoma.