→ Submit your rig and win a Tread magazine feature of your truck! ←
Get the Magazine
Camping, Features, Outdoor Adventures, Overlanding
Written by Ashley Giordano
Photos by Joanie Pépin

“Where must we go, we who wander this wasteland, in search of our better selves.” —The First History Man, Mad Max: Fury Road

Sunlight filters through the dusty remnants of broken windowpanes, streaming into an abandoned power station in northern Chile. Graffiti marks dust-covered turbines that were retired from operation long ago. 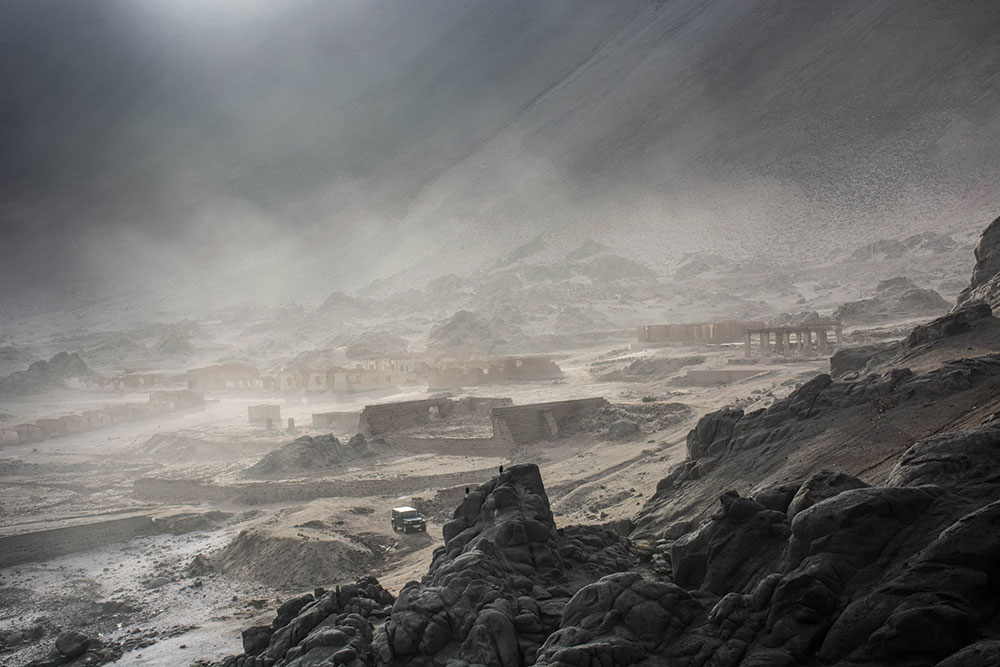 The fog that rolled in from the ocean in northern Chile created an eerie atmosphere in this abandoned village.

Footsteps interrupt the eerie quiet as a violet-haired Canadian walks beneath a loop of chains dangling from a rusty overhead beam. Behind her, a timer counts down. Click. The camera shutter opens, its sensor capturing the image. She circles back, grabbing the camera and tripod before exiting the building and returning to a black Jeep parked outside. It’s time to go. The rest of the Pan-American Highway awaits.

“When she first started road-tripping, Pépin brought a small point-and-shoot camera to capture landscapes along the way. Looking to improve her skills, she watched online tutorials about photo composition and editing.” 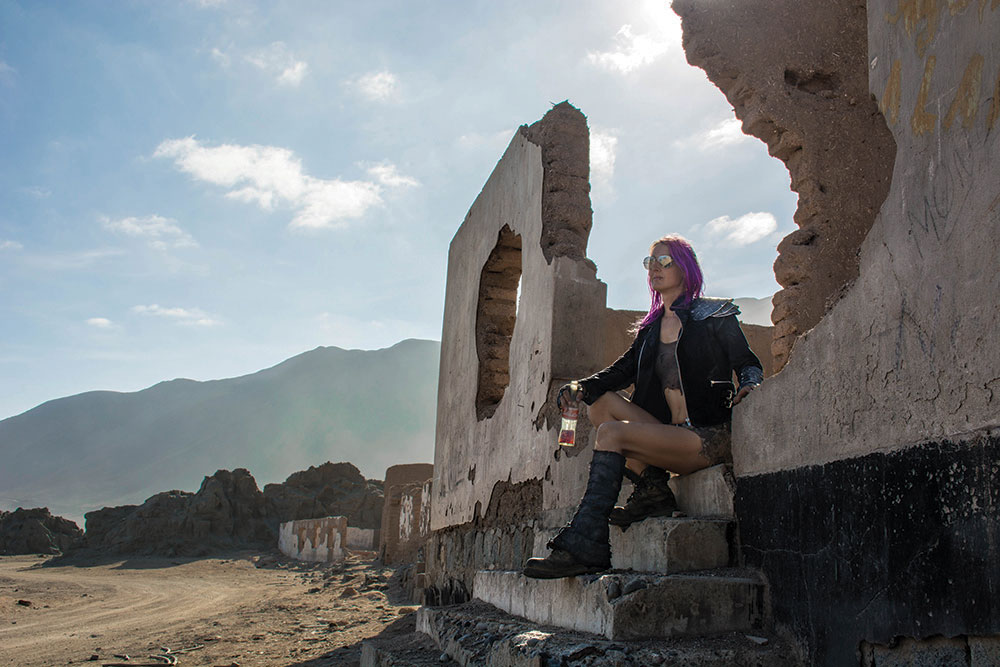 Northern Chile offers some of the best urban exploring in South America, with many ghost towns that are free to explore.

From the International Car Forest in Nevada to the train graveyard in Uyuni, Bolivia, Pépin sought out the sand-swept and desolate, visiting ghost towns and post-apocalyptic scenes, which helped create a unique and cinematic feel to her photographs.

After nearly two years of travel, Pépin arrived in Punta Del Diablo, Uruguay, just as the COVID-19 pandemic broke out, forcing her to abandon shipping Beauty to Europe. She returned home to Montréal, resumed her full-time career as a programmer in the gaming industry and waited for her Jeep to arrive in Florida. An abandoned dam in northern Chile

With a classic French-Canadian accent, Pépin tells me that the transition from full-time overlanding in South America to strict lockdown in the city has been challenging. We’re chatting over Zoom—her signature purple hair recognizable from the photographs I’ve seen on Instagram—reminiscing about past trips and what inspired them. It’s a welcome relief for both of us.

Pépin’s lust for travel began with a weekend-long road trip in the neighboring province of Ontario.

“A friend was supposed to tag along, but she had to cancel at the last second. The ‘old’ me probably would have canceled the whole thing and stayed home, watching Netflix. But, for some reason, I decided to go alone,” she explained.

Although she’d never traveled on her own before, Pépin set off nonetheless—with no set destination, minimal camping gear and an “IDGAF” attitude. It turned out to be one of the best weekends of her life.

“After 28 years, I’d finally discovered that I could actually do things on my own,” she shared. “So, the next weekend, I decided to go on another ‘date’ with myself; then, again and again.”

By the fall of 2013, Pépin had driven to both coasts of Canada and to parts of the United States, including New York, Rhode Island, the Florida Keys and Louisiana.

“By that point, I didn’t really think I could go farther until one day, in a glorious act of procrastination, I wondered if it were possible to drive to South America,” Pépin said.

To the End of the World

The first blog she stumbled upon was Dan Grec’s “The Road Chose Me.”

“The fact that he did it with a Jeep, which I already had, pretty much convinced me that this was within my reach,” she pointed out. With that, she implemented a strict budget and modified her Jeep … with the intention of driving to the end of the world. 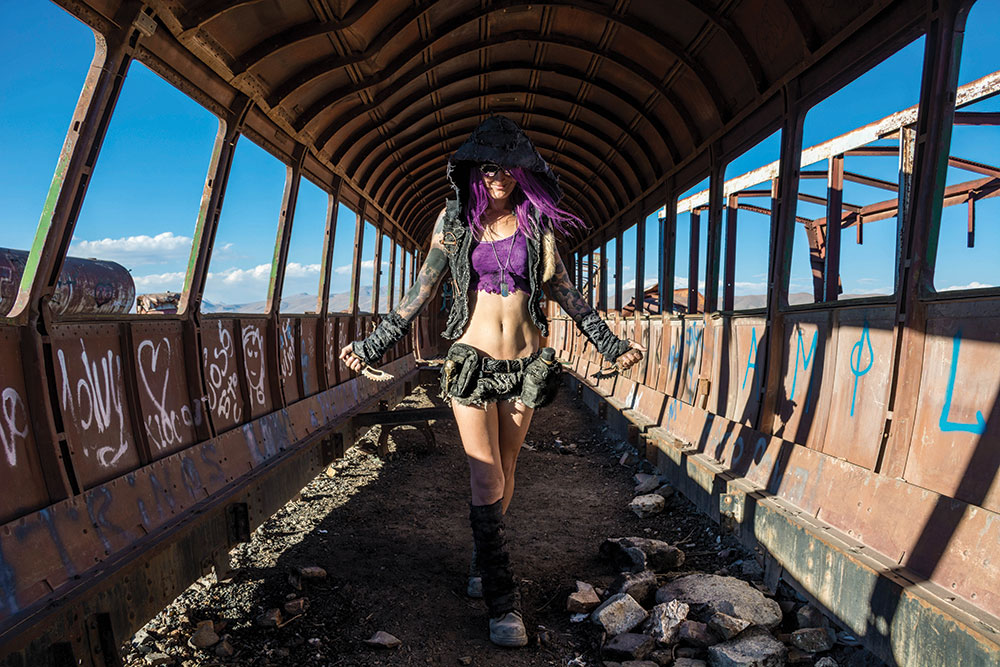 Pépin spent a week studying the lighting at the train graveyard in Uyuni, Bolivia.

Pépin has been drawn to the uneasy feel of deserted buildings since her teenage years.

“There was a school in my town that was abandoned, and I loved going there. I like when nature takes over an old building and there’s vegetation all over the walls. It’s kind of pretty—in a weird sense.”

When she first started road-tripping, Pépin brought a small point-and-shoot camera to capture landscapes along the way. Looking to improve her skills, she watched online tutorials about photo composition and editing. Eventually, as she gained experience, she purchased a Nikon 5200 DSLR camera body and later, a 50mm lens. 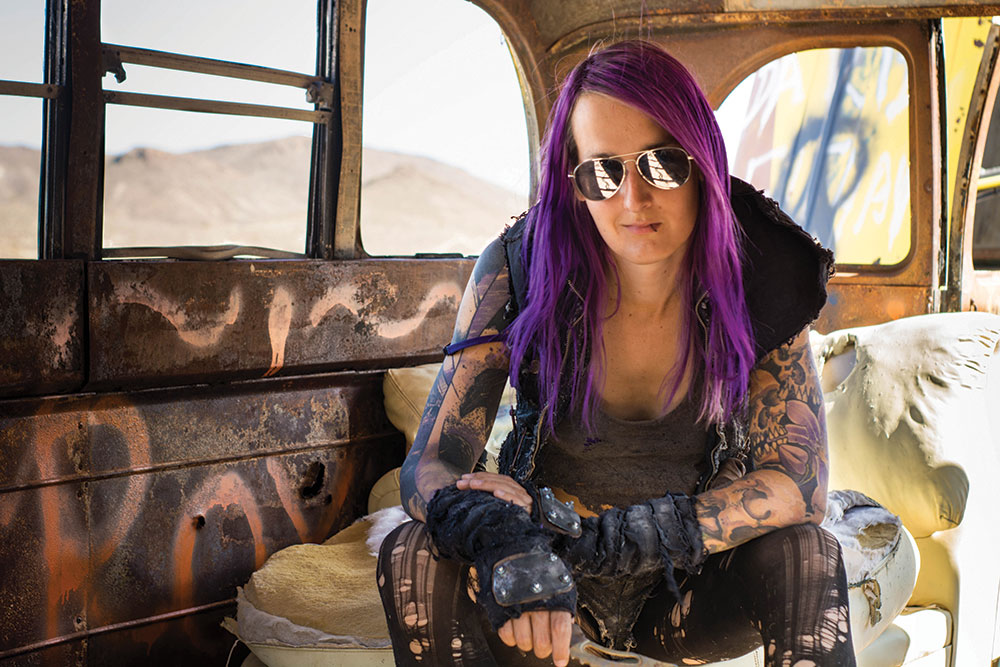 This is Joanie Pépin’s first photoshoot of her journey—the International Car Forest in Nevada.

Combining her passion for urban exploration with photography seemed like a natural fit. Because she traveled alone, Pépin added a tripod and a remote to capture herself in photographs. She made props and costumes to fit the apocalyptic style she was drawn to.

The Pan-American Highway abounds with accessible abandoned structures, which inspired much of Pépin’s trip. Pépin poses with the picturesque red dirt of southern Utah.

“Overland journeys are very vehicle-centric, and Ushuaia loves to claim that it’s ‘the End of the World,’ so I figured I could merge this trip with my great interest for the Mad Max movies (which are also very vehicle-centric and take place after the end of the world) and my passion for costumes to make my own crazy adventure,” she explained.

“I’ve always encouraged other people to try traveling alone, because so many of those occasions are just magical.” 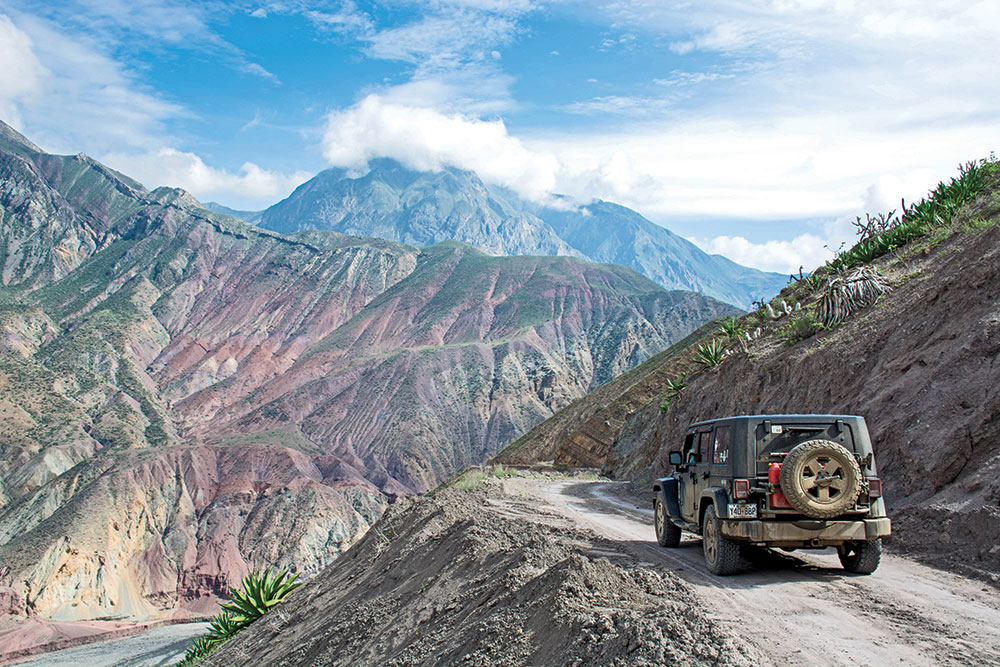 Pépin took the long way around Perú, enjoying the majestic views of the Andes along the way.

Preparing for the Adventure

Pépin spent two years planning her trip to the “end of the world,” during which time she learned about basic vehicle maintenance from her father, removed the back seats from Beauty and, after a lot of Googling, built a wooden platform for storage and a bed on top. 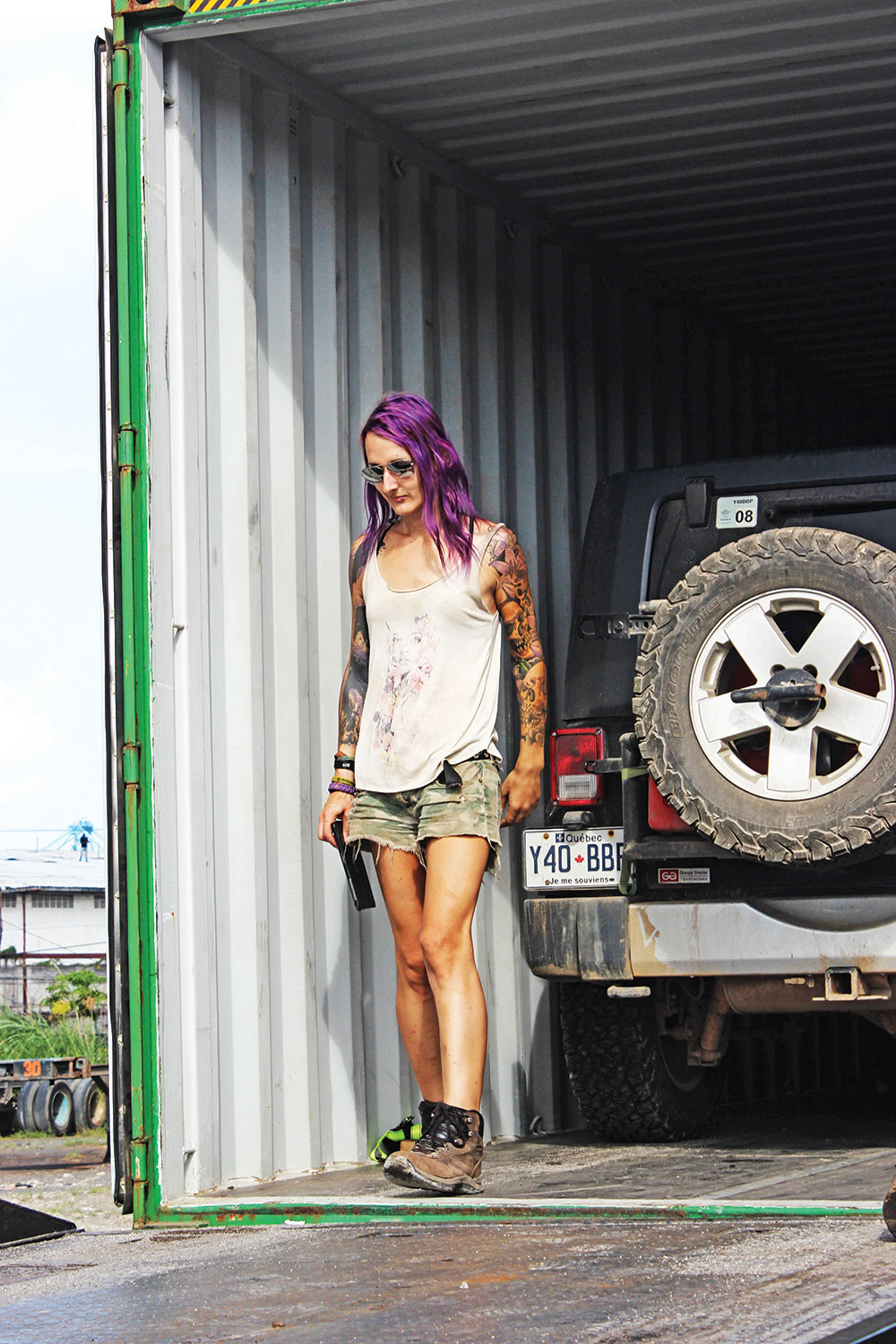 “Most people think you need a big setup to go overlanding. Many people travel in high-end rigs filled with gadgets; and while that’s all good if you can afford it, it can sometimes send the message to those who can’t afford it that they need to invest a lot [of money] before they can get on the road.”

Pépin says she added about $400 (Canadian) worth of modifications—mostly DIY. “It’s all about spending money on what really matters for you.” 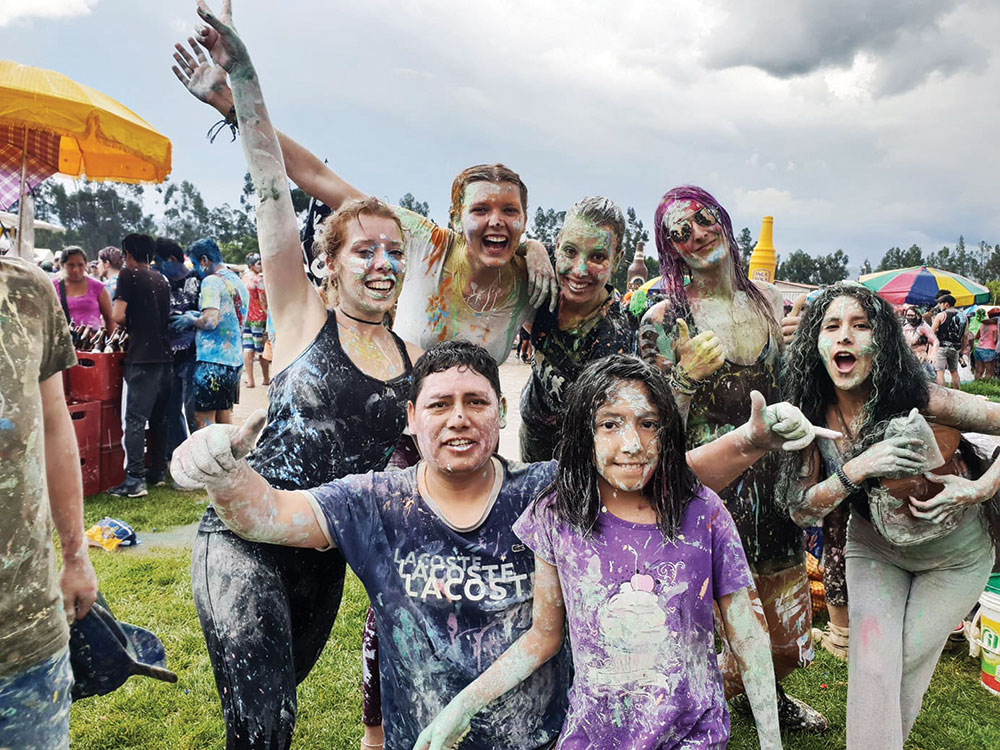 Pépin had a blast with other travelers at the paint wars carnival in Cajamarca, Perú.

A self-proclaimed introvert, Pépin acknowledges that solo travel has helped boost her confidence and overcome her shyness.

“For me, it’s very hard, but when you’re traveling alone, there’s a point when you have nothing to lose [by speaking with a stranger]. There’s also a point when you need social contact, and it forces you to reach out—even if you don’t speak the language.”

For instance, while in Guatemala, the alarm on Pépin’s Jeep went off and couldn’t be disabled. But the local people helped her and reached out to those they knew for a solution. In La Serena, Chile, she helped two Argentinians construct a bar. She made fast friends in Whitehorse during her drive through the Yukon, spent the summer solstice with a group of overlanders in Tuktoyaktuk, and was invited by locals in Dawson City to events and get-togethers.

“I’ve always encouraged other people to try traveling alone, because so many of those occasions are just magical,” she commented.

“Although solo female travelers outnumber their male counterparts, traveling does come with its own challenges [for women],” Pépin pointed out.

For those worried about safety, she recommends starting with small trips and building confidence from there: “I didn’t start with South America. I started by traveling to national parks and nearby cities. When you’re a kid, you don’t start running right away. You take baby steps. It’s the same thing.”

“‘overland journeys are very vehicle-centric, and Ushuaia loves to claim it’s the end of the world, SO I figured I could merge this trip with my great interest for the Mad Max movies … and my passion for costumes to make my own crazy adventure.’” 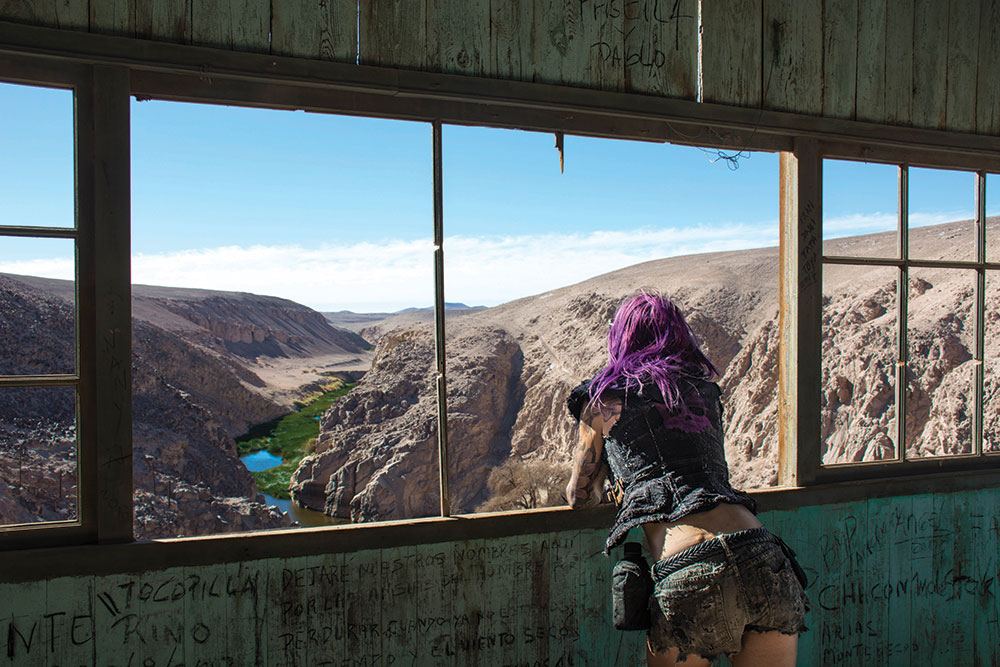 A view of the river from an abandoned house.

When it comes to safely parking for the night, Pépin recommends stealth camping.

“No one can hurt you if no one knows you’re there. Always park your vehicle facing the exit, and keep the keys close at hand.” In busy areas, she suggests places populated by families or older adults. The main takeaway: “I always say to trust your gut. Avoid walking around alone at night. And, despite what your parents taught you, it’s okay to lie. Tell them that your husband is off fishing, or you’re just doing some errands.” 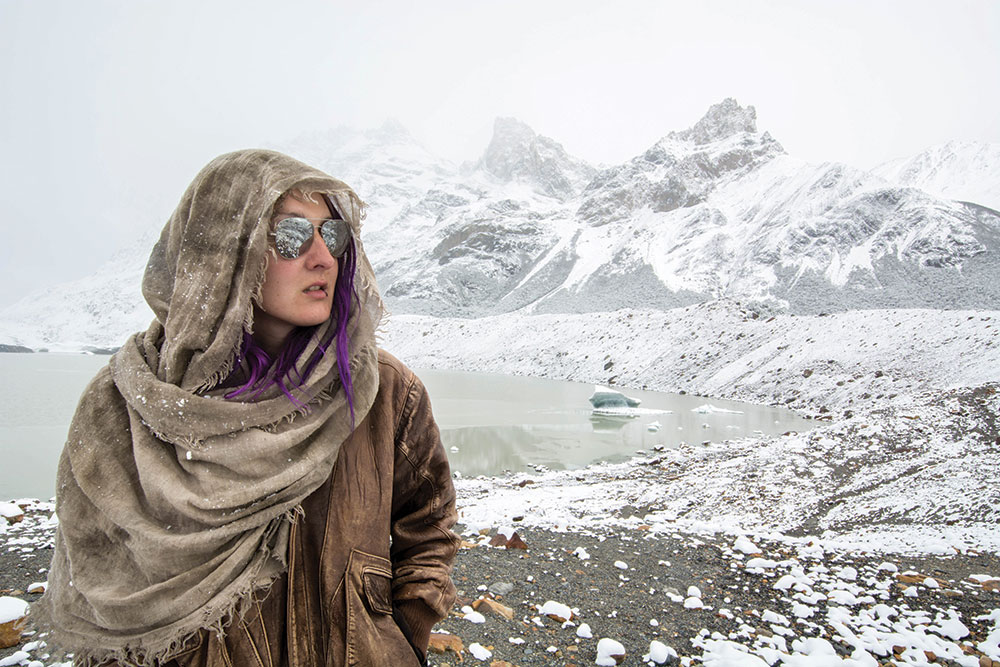 After many months in a hot climate, Canadian Pépin returned to cooler temperatures in El Chaltén, Argentina.

Until restrictions ease and borders open in North America, Pépin dreams of the open road; of Mad Max-inspired photo shoots in the dunes; of watching fog rolling in from the ocean while an abandoned village disappears into the haze.

A photoshoot among the dunes around Huacachina, Perú

Here’s to hoping that, like The “First History Man” in Mad Max: Fury Road, we’ll all find our better selves when we’re back to wandering.

EDITOR’S NOTE: A version of this article appeared in Tread September/October 2021.