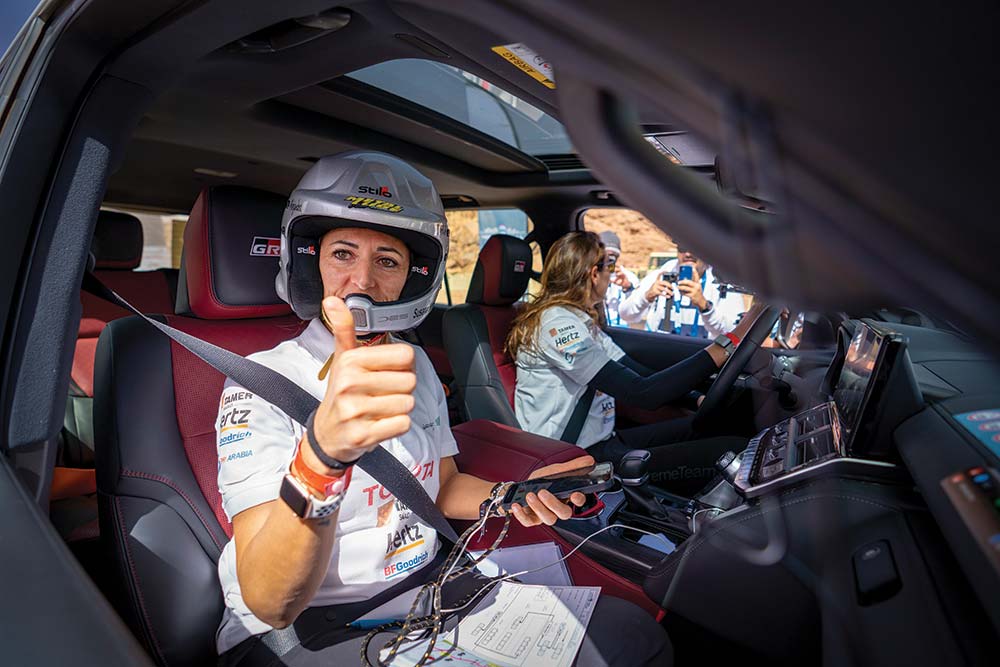 Women in Saudi Arabia have only been allowed to drive a car beginning just four years ago. Announced in September 2017, it wasn’t until June 24, 2018, where women in the Kingdom of Saudi Arabia got behind the wheel. Fast forward to March of 2022, and the first-ever all-women’s off-road competition in Saudi Arabia and the Arab nation was held: Rally Jameel.

This three-day event took competitors from Hail to Saudi Arabia’s capital Riyadh in bone-stock 4x4s and all-wheel-drive vehicles. Not only did they tackle soft sand and challenging terrain, but they tried to keep the exact speed, time, and distance while finding various waypoints required by the rally’s roadbook. This is called a time/speed/distance rally, or TSD rally.

Women in Saudi Arabia have only been allowed to drive a car beginning just four years ago.

Rally Jameel competitors rallied past various historical and notable sights but didn’t have the chance to stop at them. (Photo: Rally Jameel)

Hassan Jameel is a supporter of Rally Jameel. He is a Saudi businessman and the Deputy President and Vice Chairman of Abdul Latif Jameel, which includes Abdul Latif Jameel Motors, a subsidiary working with Toyota since 1955. He and the company helped fund the rally and supplied stock Toyota vehicles for some of the Rally Jameel competitors to use.

“Under the guidance of the Saudi Automobile & Motorcycle Federation (SAMF), the collaboration of Abdul Latif Jameel Motors with legendary rally driver Abdullah Bakhashab made the vision of Rally Jameel a reality,” Mr. Jameel said, “setting a new benchmark and a new first for women’s motorsports in Saudi Arabia and the region. It was a remarkable success, with 34 teams and 68 drivers from 15 countries taking part.”

Yes, they had their challenges and tough moments, but they all fought through and achieved something very special.

An avid motorsports enthusiast and accomplished racer, Abdullah Bakhashab, is the general manager of Bakhashab Motorsports. Mr. Bakhashab started rallying in 1992 and worked his way up to regional championships, winning the 1995 Middle East Rally Championship title. 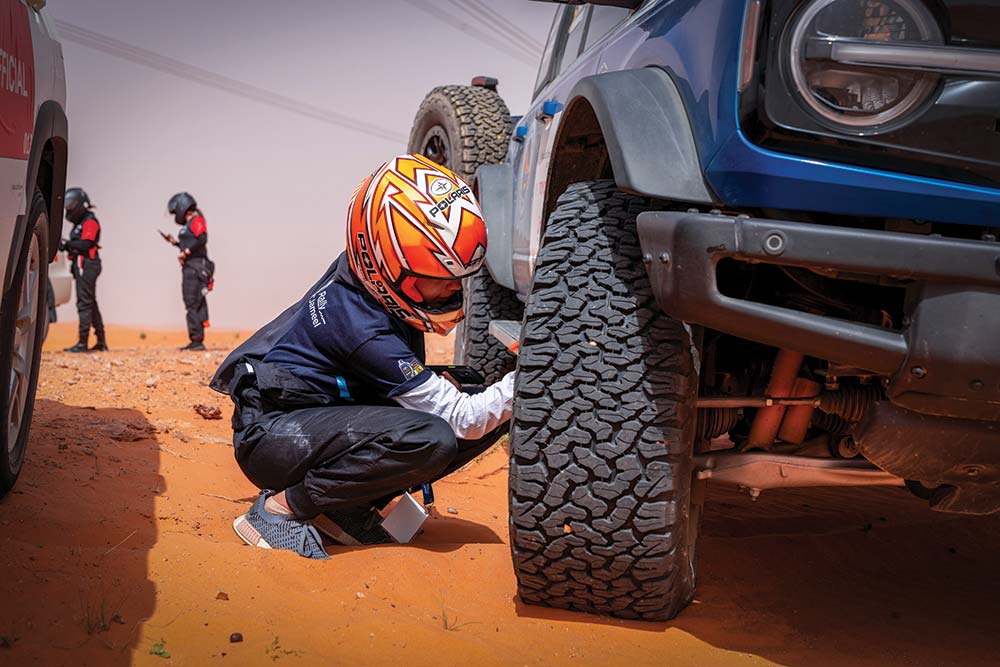 “I then moved on to the World Rally Championships, or WRC as it’s better known, racing from 1998 to 2002.” During that time, Mr. Bakhashab won the well-known Acropolis Rally in Greece.

“I was brought into the project due to my background in motorsport,” Mr. Bakhashab explained. “Although Rally Jameel wasn’t a speed race, it still shares the same organizational challenges as a traditional road rally and so takes a lot of planning.” 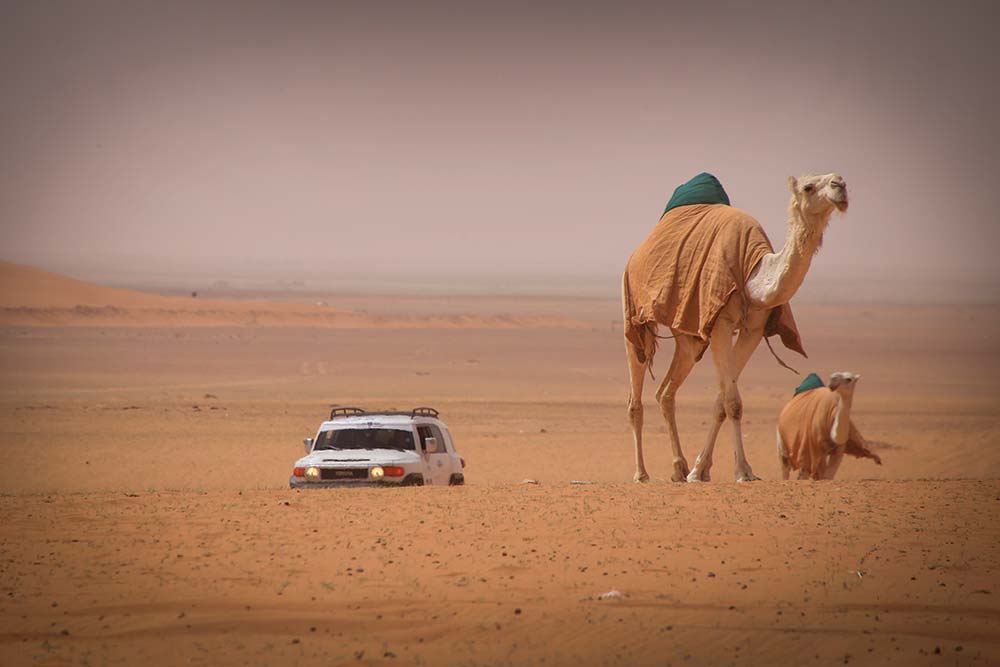 Roaming camels were a common occurrence during Rally Jameel. That’s something certainly not seen in the United States. (Photo: John Rettie)

We got the opportunity to interview members of three teams who competed in Rally Jameel. It was inspirational to hear their experiences of competing in an off-road navigation rally, especially in a country where women have only had the right to drive for less than five years. 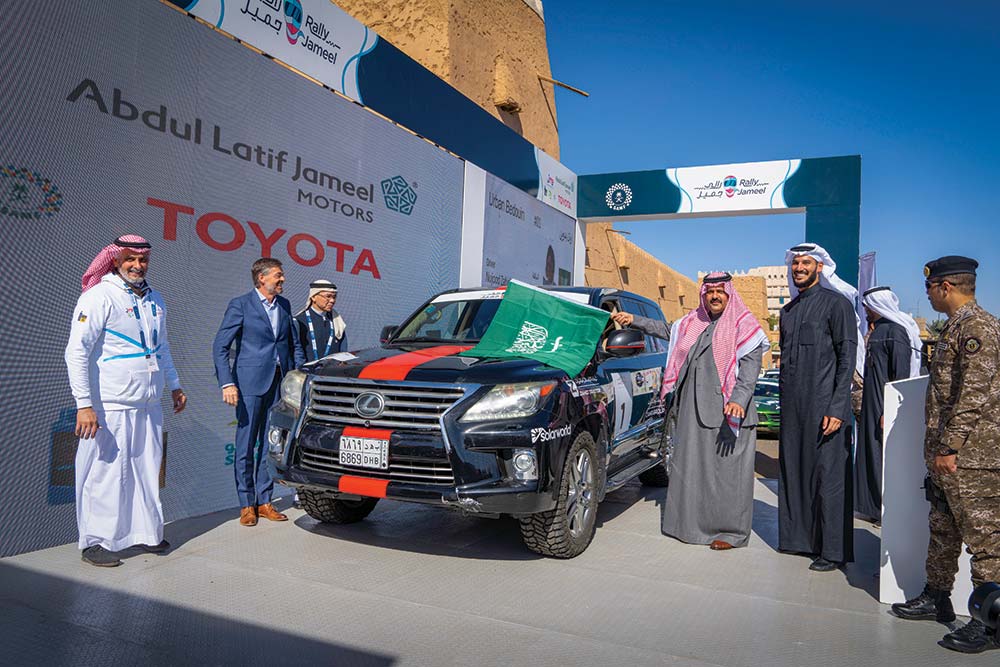 Nujood Zahid, a Saudi woman and driver of team #1, Urban Bedouin, along with navigator and fellow Saudi, Dalya Islam, excitedly waited as the green flag dropped for them to start the competition. (Photo: Rally Jameel)

Nujood Zahid, a Saudi woman and driver of Team #1, Urban Bedouin, has driven summers in the desert since 2015. However, when it became permissible for women in Saudi Arabia to legally drive a vehicle, she started driving every chance she got. She, along with navigator and fellow Saudi, Dalya Islam, jumped at the chance to partake in this inaugural event. Zahid shares her thoughts about the rally.

Author: Why did you compete in the rally with your co-driver?
Zahid: Driving off-road was something that I had planned on doing in the future. When I found out about Rally Jameel I knew that I wanted to be a part of this landmark event, so it expedited my target date. My co-pilot joined as she has a love for adventure and enjoys puzzles and thinking games, so navigation seemed to be a good fit.

Author: How did you feel when driving the Lexus LX 570 S for the rally?
Zahid: I literally would put my hand out the driver’s seat window and would say to my car “good girl!” The Lexus 570 drove like a champion.

Author: How well did your teammate do being the co-driver?
Zahid: Given that my navigator had never done this before I think she did very well in understanding the discipline of navigation and communicating directions.

Author: What would you tell other women that want to drive in the sand or dirt, any words of advice?
Zahid: Get to know your vehicle very, very, well—every button and lever—know when to use which option, that will be the difference between getting stuck in the sand or not, having to change a tire or not. 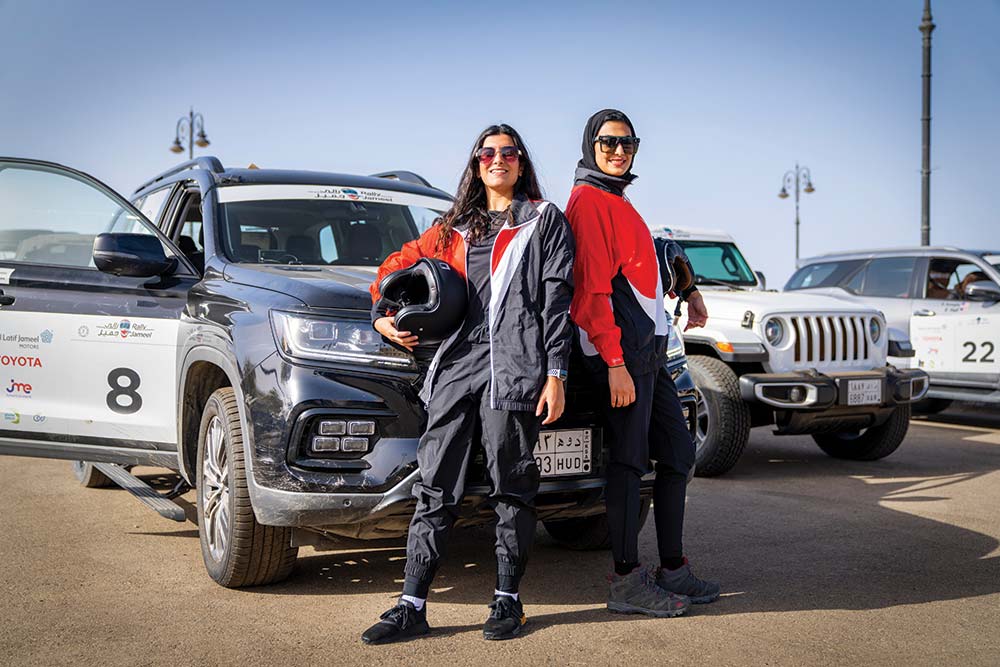 Sisters Samar Rahbini (driver) and Walaa Rahbini (navigator) were great supporters of each other throughout the rally. To driver Rahbini, they competed as a team and finished the rally as a team. She also added the following:

Author: What did it feel like when you first drove a car?
Rahbini: The feeling is quite liberating. You get to experience the thrill, engagement with the car, and get an overall feeling of excitement.

Author: Tell us about one or two good things that happened during the rally.
Rahbini: Seeing myself and women around me taking part in this race has had a positive [effect] on us all. Taking part in the rally itself was a good thing, in addition to, of course, the experience as we passed through.

Author: Would you compete in the rally again?
Rahbini: Yes, I would. I’d always love to relive such an experience again.

Author: How did your sister and you feel when you finished the rally?
Rahbini: The feeling is indescribable, to be honest, and surreal. This is all mainly due to the uniqueness of the journey we’ve been through and the challenge we have taken. 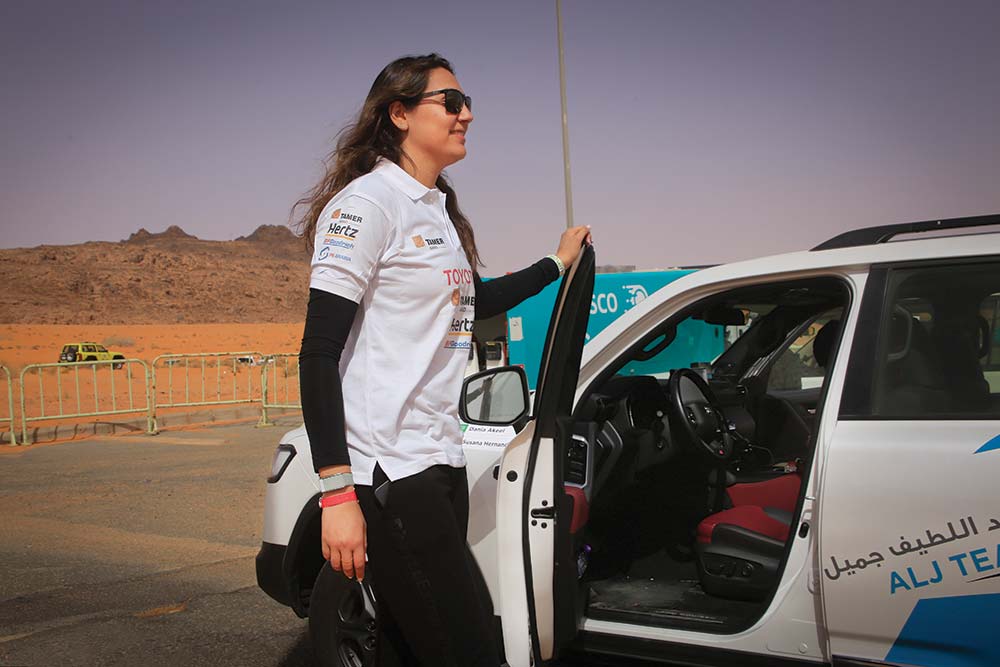 Rally champion and racer Dania Akeel said it would depend on her “full calendar” if she would participate in Rally Jameel again. “I would prioritize races which are not navigation centered.” (Photo: John Rettie)

Rally champion and Saudi Dania Akeel, along with her teammate and navigator from Spain, Susana Hernando, commandeered a 2022 Land Cruiser GR during Rally Jameel. A decorated racer, Ms. Akeel won the 2021 World Cup for Cross-Country Bajas of the T3 category, and also drove in the grueling 2022 Dakar Rally (where she finished in the top 10 of the T3 category, arriving at 8th place of 48 participants). Akeel recalls specific moments of Rally Jameel:

Author: How long have you been driving a car and what did it feel like when you first drove a car?
Akeel: I got my driver’s license in the United Kingdom when I was a student there in 2006. I still remember the wonderful feeling of the first time I drove on the highway. It felt like freedom and ownership.

Author: How did you feel when driving the Land Cruiser GR for the rally?
Akeel: It is a great vehicle. I felt comfortable, light, and safe.

Author: Tell me about one or two good things that happened during the rally.
Akeel: I learned how important the role of the co-driver is. I’ve always respected their job although Rally Jameel was my first navigation rally, so the driver’s role was not as vital as the co-driver. I understood more about the challenges they face and how accurate they must be to finish well. Also, I learned to support my co-driver and understood the importance of trust and providing confidence to your teammate in order to increase your chances of success.

Author: What would you tell other women that want to drive in the sand or dirt, any words of advice?
Akeel: Enjoy every kilometer, it is a blessing to be able to discover countries in such a stimulating way. 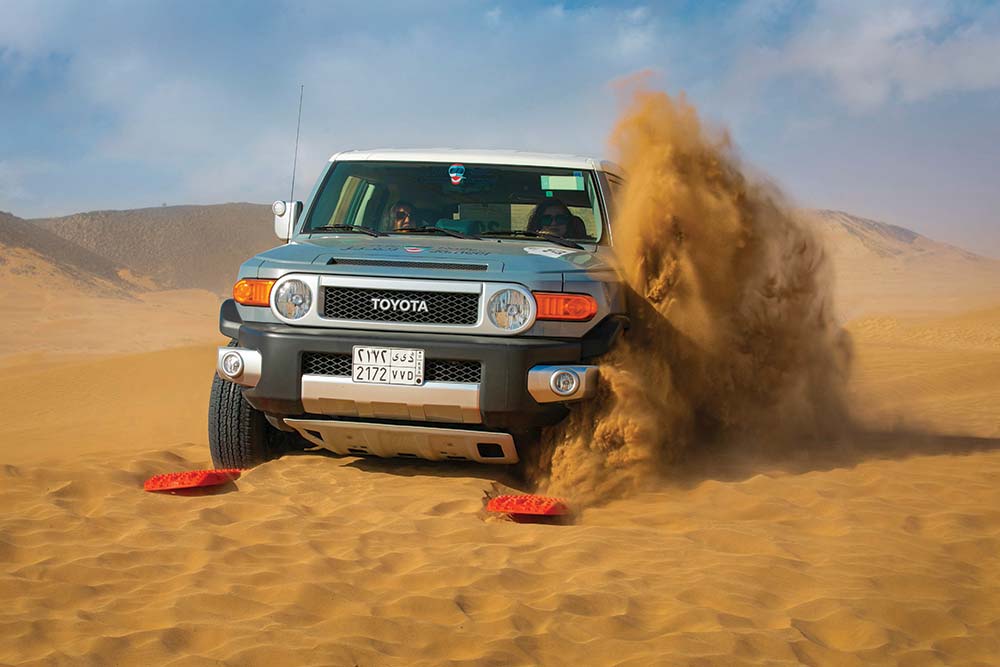 Rally Jameel competitors drove stock Toyota Land Cruisers, Prados, and Fortuners. They also piloted other makes and models like Ford Broncos, Jeep Wranglers, and even a Porsche Cayenne and Macan. Teams from across the world met up for three days of challenges and comradery, including three U.S. teams. Others made the trip from far-flung distances like Spain, Oman, Germany, and Britain.

“The best part by far was being part of such a historical event but also witnessing the emotions of the competitors throughout the event,” Mr. Bakhashab pointed out. “Yes, they had their challenges and tough moments, but they all fought through and achieved something very special.” 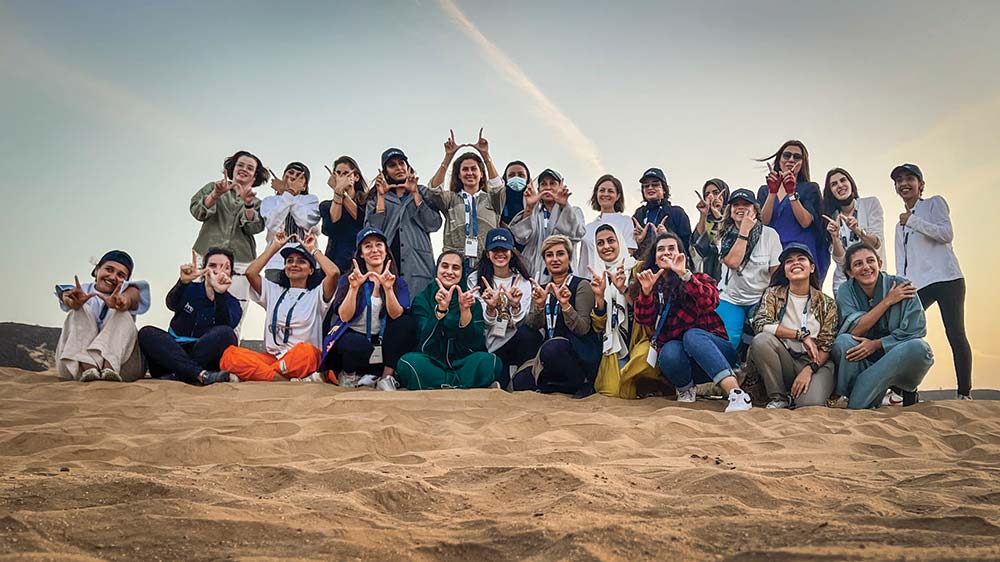 Although weary and challenged, Rally Jameel competitors boasted huge smiles and connected with each other over the three-day event. (Photo: Rally Jameel)

Editor’s Note: This story originally appeared in the November/December issue of Tread Magazine.