→ Submit your rig and win a Tread magazine feature of your truck! ←
Get the Magazine
Features
Written by Ashley Giordano
Photography by Richard Giordano

THE PATH LESS TRAVELED IN PERU 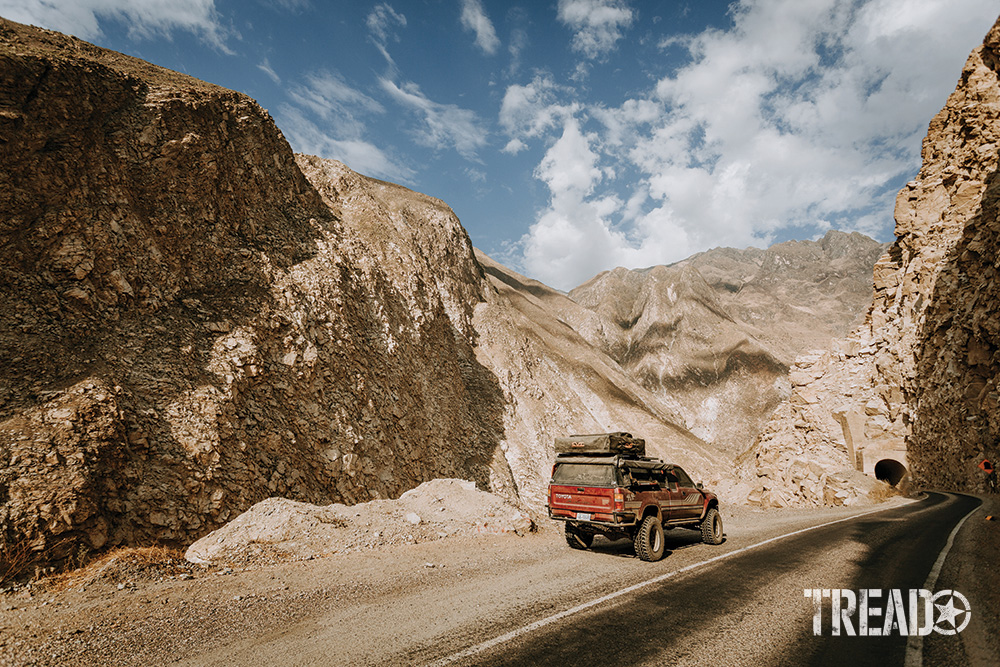 An Overland Journey Through Northern Perú

Like clockwork, the familiar feeling of hesitation mingled with excitement creeps in prior to each and every border crossing. Preconceived notions about a country swirl through your mind—a mix of reports from other travelers, captivating photographs in earmarked guidebooks and details from blog posts you’ve read.

But now you are here, at the frontera. Stamps are pressed into the pages of your passport, and paperwork is filled out, granting you the freedom to exit one country and enter another.

The day had come for us to step into the unknown: Perú.

To be honest, we weren’t sure what to expect. Fellow travelers had spun tales of jaw-dropping landscapes but lamented the rundown towns, piles of trash strewn along coastlines and unfriendly encounters with locals. 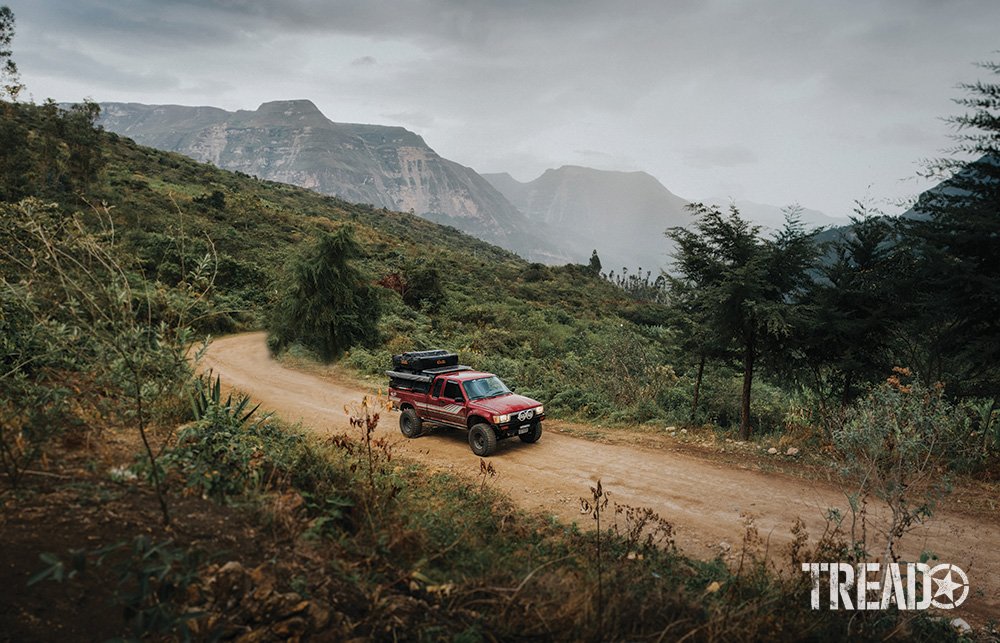 Cruising along Ecuador’s Highway 682, we eventually crossed the border into the mountainous Cajamarca region of Perú. We then did what we do best: We put aside any presumptions about the country and set out to discover it for ourselves.

However, before we set off in search of Perú’s delights, we first had to remedy the ear-shattering roar of our 22RE engine that was bellowing from a busted exhaust pipe. A tin can and a few gear clamps made for a temporary solution as we continued along the smooth, paved roads between the border and our first Peruvian town of San Ignacio.

Our arrival was loudly announced by our exhaust pipe problem (“the Canadians are here!”); and, more than once, a handful of Peruvian kids stood on the side of the road with both hands covering their ears and grimaces on their faces.

We camped in the gated, grassy parking lot of The Gran Hotel San Ignacio, tossing and turning throughout a lively karaoke night, which continued well past 2:30 a.m.

“We then did what we do best: We put aside any presumptions about the country and set out to discover it for ourselves.” 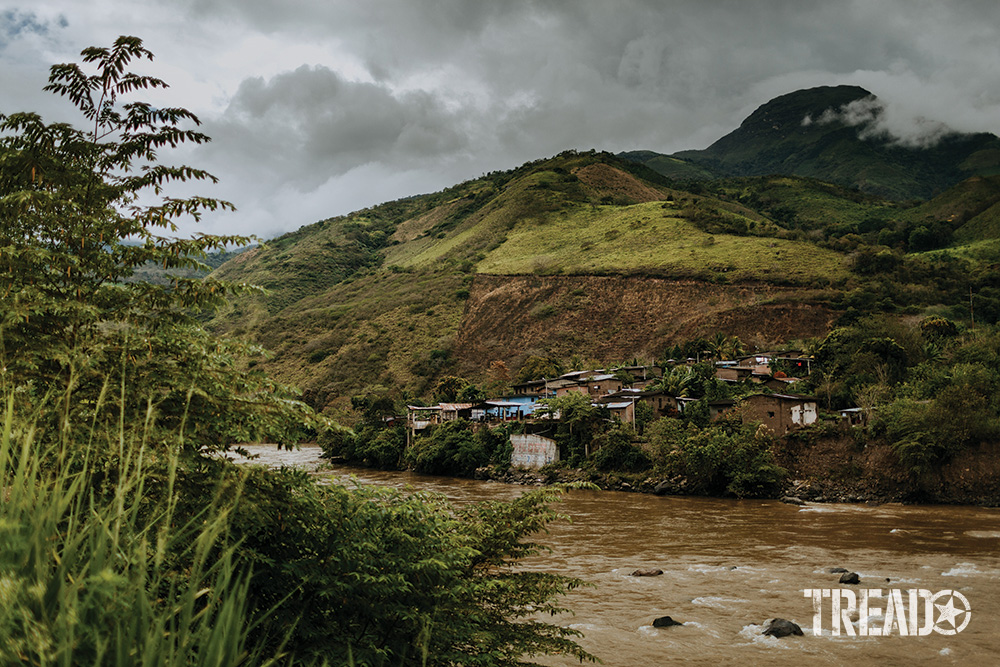 The scenery of northern Perú, close to the Ecuadorian border, reminded us of Southeast Asia.

This northern region of Perú offered up some of the most spectacular and ever-changing scenery of our trip. We passed brilliant-green, multi-tiered rice fields, curving canyons, steel-gray rivers and large mud bricks lying out to dry in the sun. We felt a bit confused, because the scenery reminded us so much of Southeast Asia. Korea Motors “tuk tuks” (called “moto-taxis” in South America) roamed the roadways, and Chinese food restaurants popped up around every corner. Old Toyota Hiluxes littered the streets, so we figured we could find the exhaust parts we needed at some point. 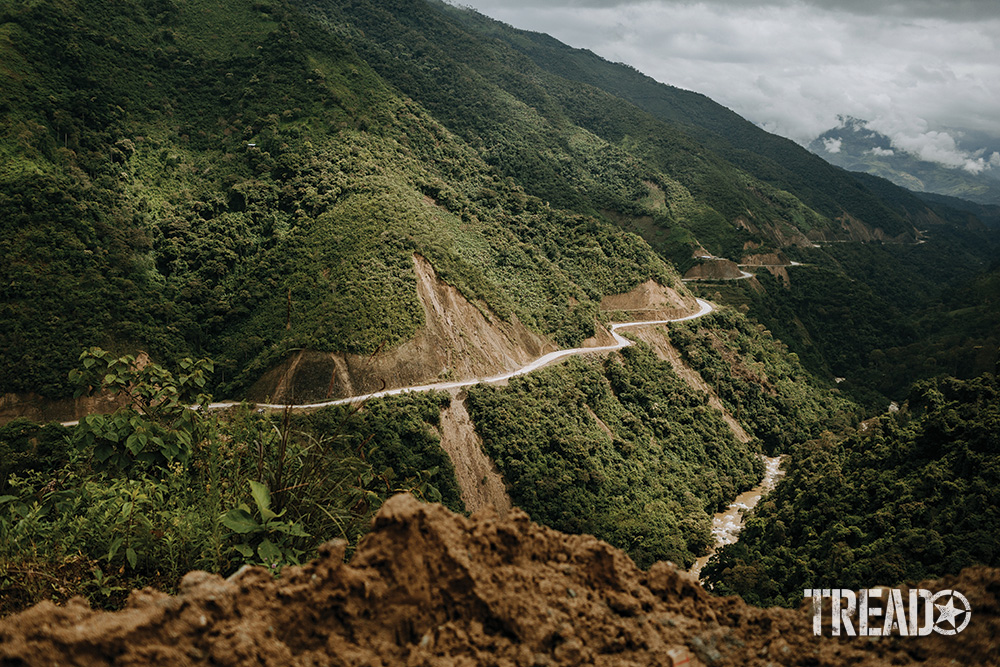 Northern Perú offered up some of the most spectacular and ever-changing scenery of our trip.

Unfortunately, our search in the town of Jaén proved fruitless, so we continued on, taking in the 2,530-foot (771-meter) Gocta Waterfall before exploring the cliff-side tombs of Pueblo de los Muertos and the fortress of Kuélap, both built by the Chachapoya people between 500 and 1493 A.D., before they eventually succumbed to the Inca in the 15th century. Because this area of northern Perú hasn’t seen the massive influx of tourism the south has, we casually sauntered through the ruins by ourselves for a couple of hours.

Continuing toward the Andean town of Celendín, we struggled to find a suitable camp spot for the night. We parked at the end of a soccer field in the small village of Dos de Mayo and then approached two elders, who were watching an in-progress game. Asking for their permission to pop our rooftop tent for the night, we were met with big smiles as the ladies replied, “Of course!” It didn’t take long for a little crowd to gather around our pickup for an impromptu volleyball game.

The town mayor explained to us that this small village was formed by a group of families who’d left the city of Cajamarca, located in Perú’s northern highlands. They’d selected Dos de Mayo for its fresh water supply, because the local water sources had become contaminated from the Yanacocha, which is the largest open-pit gold mine in South America. Here, in Dos de Mayo, lives a tight-knit community, and everyone gathers around the fútbol field to play, chase the dogs, knit, watch the kids … and apparently, play volleyball with a few North American overlanders. 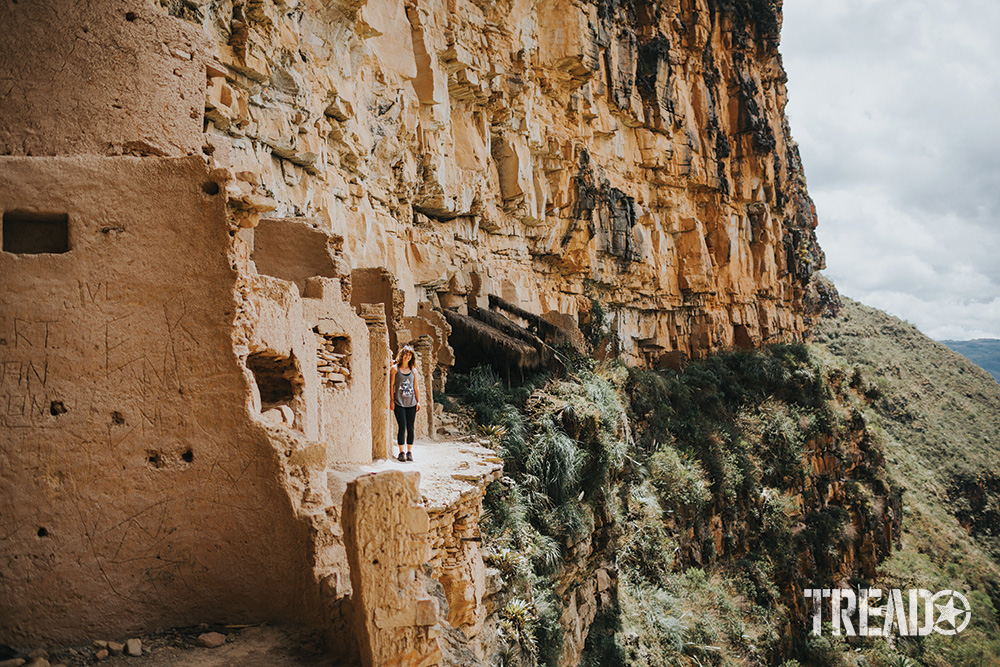 Because Pueblo de los Muertos has been disturbed by grave robbers, visitors must obtain the key from the local tourist center.

The mayor dropped off a couple of bags of dusty brown potatoes as a gift before we left in the morning. We certainly felt welcomed with open arms in Perú.

We were becoming quite proficient with the term, tubo de escape (exhaust pipe), and a mechanic in Celendín offered to handcraft the exhaust part we needed from scratch with some steel water pipe. Our fix would have to wait. 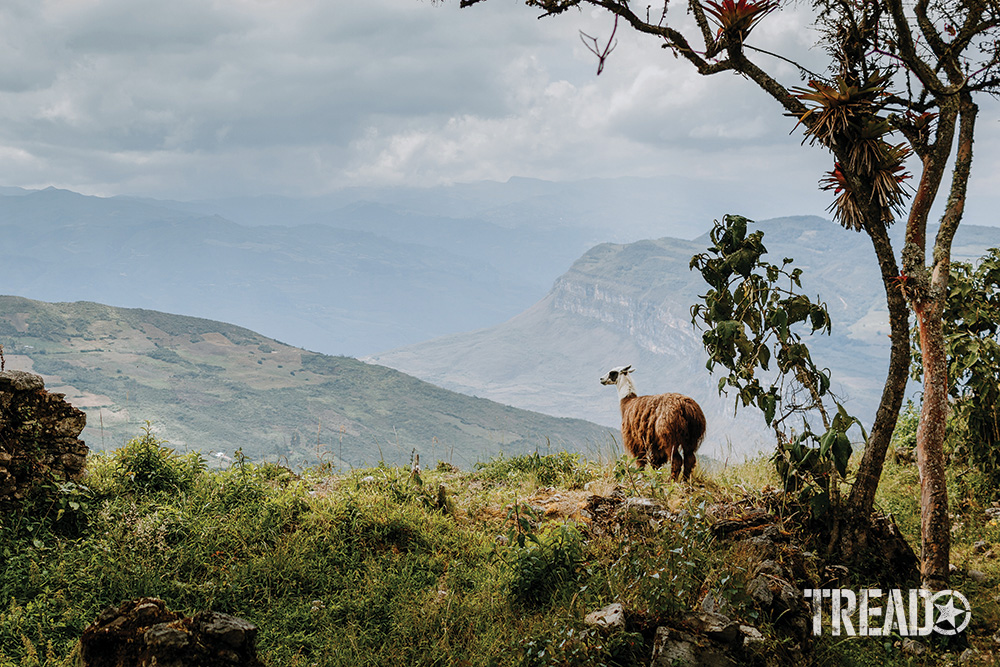 A llama enjoys the view from Kuélap, an archeological site that’s older than Machu Picchu.

In the meantime, we enjoyed all that the Peruvian food markets had to offer, strolling past a good variety of bagged spices, huge barrels of olives soaking in brine and a ton of dried fruit and nuts, along with gnarled ginger, turmeric root, and fresh fruit and vegetables displayed on cobalt-blue plastic tarps. Chatting with the vendors was equally as fun. They always looked surprised to see green-eyed foreigners browsing the produce section, and we had a few laughs with many of the ladies who were sitting behind the tables piled high with goodies.

Leaving Celendín behind, we set our sights on Perú’s Áncash region. Home to the spectacular Cordillera Blanca and Cordillera Huayhuash mountain ranges and the well-trodden tourist town of Huaraz, we entered the Áncash via the renowned Cañón del Pato (Duck Canyon), a 45-kilometer stretch of dirt road interrupted by 35 single-lane tunnels and gorgeous, high-mountain-pass scenery. 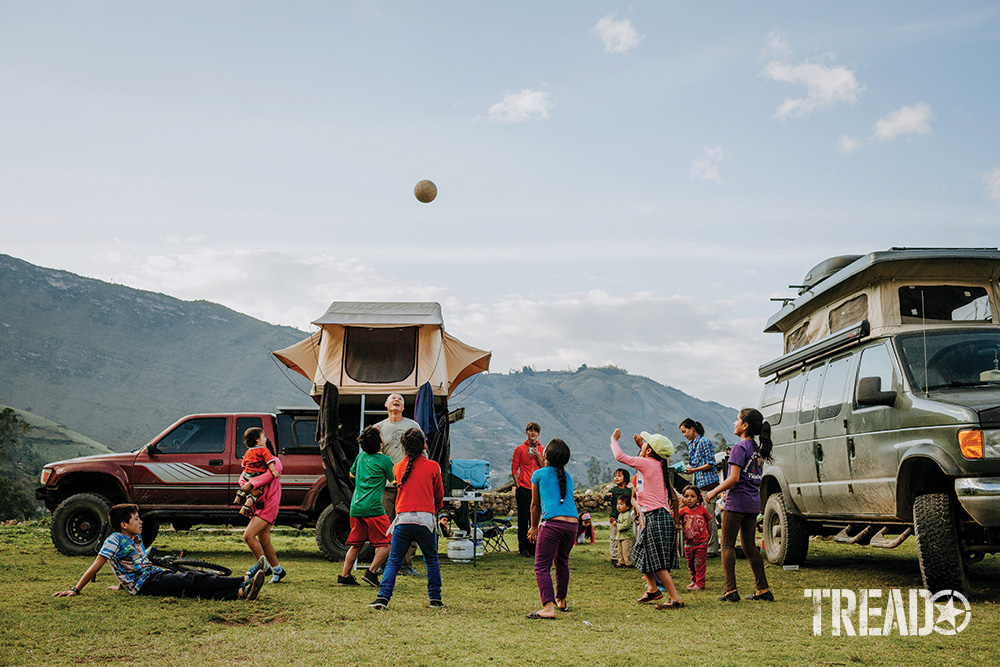 An impromptu game of volleyball in Dos de Mayo We arrived at Camping Guadalupe in Caraz a tad hard of hearing, because our trusty tin can contraption only muffled so much of our bellowing exhaust, which echoed off the canyon and tunnel walls as we slowly made our way through.

“ … we entered the Áncash via the renowned Cañón del Pato (Duck Canyon), a 45-kilometer stretch of dirt road interrupted by 35 single-lane tunnels and gorgeous, high-mountain-pass scenery.” 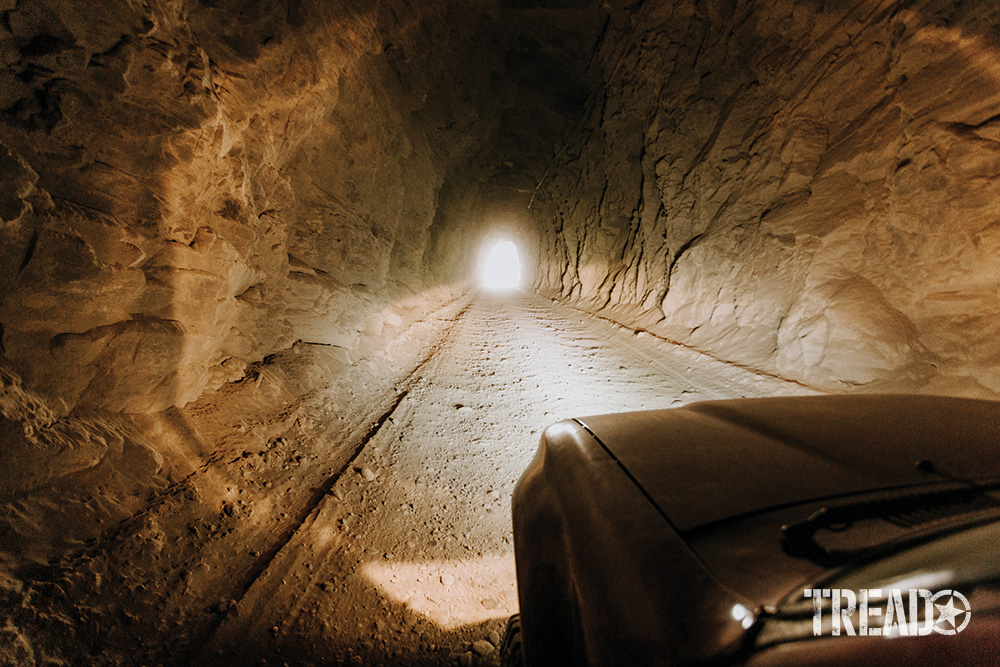 Located at 13,632 feet (4,155m) of elevation, Laguna Parón left us out of breath after climbing even the smallest of inclines. Nevertheless, we were rewarded with its aquamarine waters, purple wildflowers and snow-capped peaks. We continued our acclimation process at the Llanganuco Lodge, owned and operated by British mountaineer and expat Charlie Good. Swinging in hammocks under the shade, we sipped cups of coca tea while perusing Charlie’s large collection of survivalist and apocalyptic-themed books, enjoying a break from playing fetch with his two Rhodesian Ridgebacks.

“After nearly a month in northern Perú, we were sad to leave a region so rich in culture, history, food and scenery.” While bumbling around the lodge one day, we spotted a gray, 1994 Toyota 4-Runner pull up into the camping area. We walked closer, peering at the vehicle to see who was inside. A quick inspection revealed Virginia license plates. A typical dirt road leads to one of many hiking trailheads in Perú’s Cordillera Blanca range.

We hadn’t seen or met any North American overlanders in quite some time, so when Chris and Mallary popped out, we eagerly ran up to them and immediately decided we were going to be friends. Sharing a taxi early the next morning to the Laguna 69 trailhead, the four of us put boots to the trail, undertaking what was the most scenic hike we’d ever done. Swimming in the glacial waters of Laguna 69

After nearly a month in northern Perú, we were sad to leave a region so rich in culture, history, food and scenery. But, as each day passed, we became more nervous about the rusty tin can and gear clamps that held our exhaust pipe together. The fix would just have to wait for our arrival in Lima, the bustling capital city of Perú.