With 15,000 miles on the odometer, Daniel Kuttner’s Iglhaut Allrad up-fitted Mercedes Sprinter has already proven itself on and off road. From cruising the autobahn at 110 mph to crawling the rocks of Moab, this beast has done it all with composure and confidence.

“Allrad” is German for all-wheel drive, and the Iglhaut Allrad system has transformed this basic two-wheel-drive Mercedes Sprinter into the ultimate off-road van. Your eyes aren’t deceiving you, this beast is rolling on massive 37-inch tires.

Let’s start at the beginning. Fritz Iglhaut was a truck driver in the ’50s who had a dream of building his own trucks, a dream shared by two of his four sons, Friedrich and Hans. They built their first truck in a clay mine after hours. By the ’60s, Fritz and Friedrich had built several trucks and Hans had become a master technician at Mercedes. 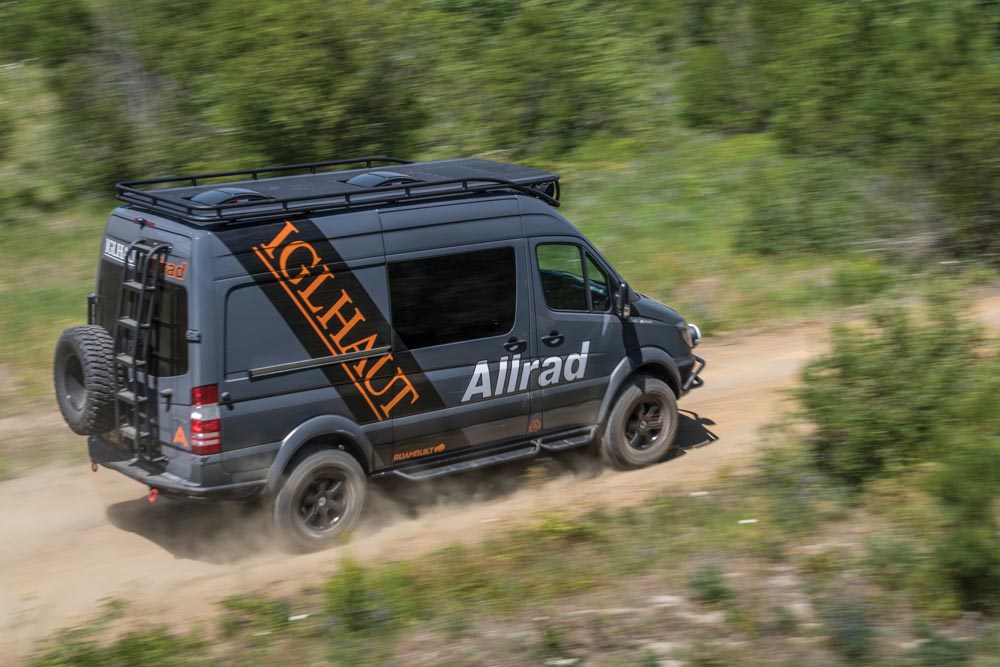 The first Iglhaut Mercedes dealership opened in 1965 in Marktbreit, Germany.  The dealership quickly gained a reputation for superior quality and craftsmanship, and a can-do special projects ethos. The business continued to grow, and in 1979, Iglhaut’s automotive fabrication division moved into its own facility.

In 1983, Iglhaut was commissioned to build an all-wheel-drive Mercedes 207D for an alpine hotel owner, which proved to be so good that two more were ordered. This was the first AWD conversion on a Mercedes commercial vehicle, and led Iglhaut down the four-wheel-drive conversion business model they have today. 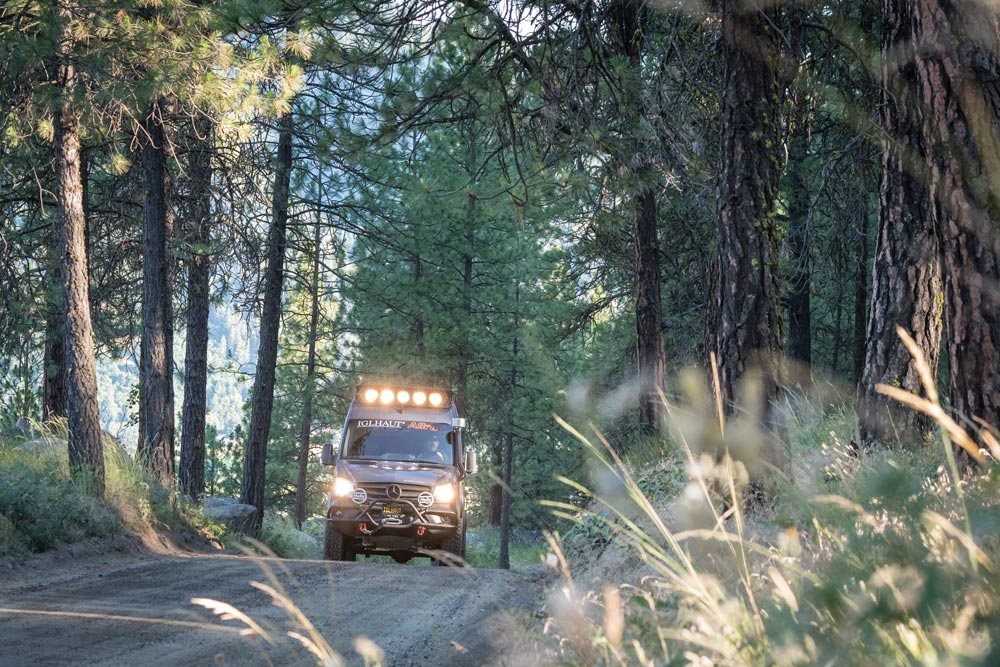 Any terrain, any time. The Iglhaut Allrad Sprinter is ready to explore.

By 1985, third-generation Michael Iglhaut was a Mercedes-certified automotive technician and working alongside his father, Hans, when an invitation arrived for the Liberty-Raid Rally, which went from Cologne to Khartoum to Cairo. Hans told his son, “You’re doing this.” With no rally experience and in his own creation, Michael came in Second. This impressive performance helped make Iglhaut a world-renowned name in the off-road community.

While Iglhaut has kept busy in Europe, and has had special projects around the globe, they haven’t ever had a presence in North America. That all changed after Daniel Kuttner fell in love with a 1990 Mercedes 410 with Iglhaut AWD system.

Kuttner has been fascinated with Mercedes vans for a long time, importing, daily driving, and selling many over the past 20 years. It all started with Mercedes firetrucks, which live their lives indoors, have low miles, and are constantly serviced and driven by professionals. In order to import them into the U.S. they had to be 25 years old, which is about the time German Fire Departments look to replace a vehicle regardless of miles or condition. Kuttner considers this a “match made in heaven.”

“Being well-versed in the logistical nightmare of importing vehicles, Kuttner figured out how to make the ultimate Iglhaut 4×4 Sprinter a reality for U.S. customers—Iglhaut Allrad USA was born.”

The last firetruck Kuttner owned was a 1990 Mercedes 410, the precursor to the Sprinter. The 410 was up-fitted with an Iglhaut AWD system. He purchased it in Switzerland with only 7,000 original miles on it. He drove it to the Abenteuer/Allrad Expo, the largest overland gathering in the world. At the show, he approached Iglhaut about opening the U.S. market for their awesome product. 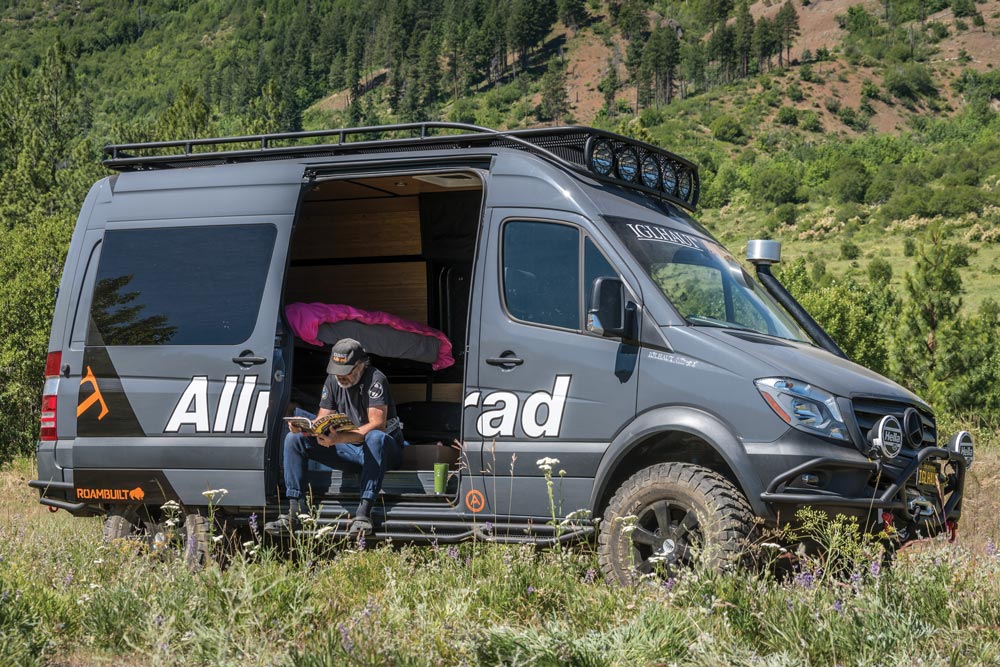 Kuttner thought, if he was to spend top dollar on a Sprinter buildout, why not start with the ultimate platform. He was tired of hearing, “All the cool stuff is in Europe,” at the North America overland shows. Being German himself and speaking the language opened the door for Kuttner to work out a deal with Michael Iglhaut for exclusive U.S. distribution of Iglhaut products. Of course, the deal was hashed out over some bratwurst and beer. 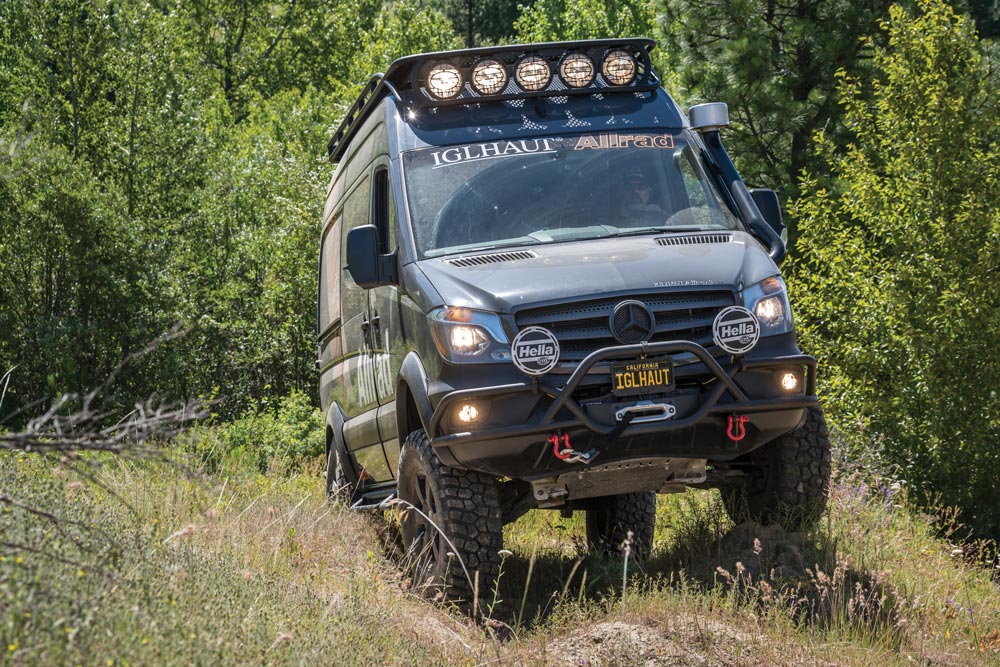 Being well-versed in the logistical nightmare of importing vehicles, Kuttner figured out how to make the ultimate Iglhaut 4×4 Sprinter a reality for U.S. customers—Iglhaut Allrad USA was born. The first order of business was building his own show truck as a proof of concept.

For the U.S. market, the process begins by sending a U.S. specification two-wheel-drive Sprinter to Iglhaut in Germany. It then takes Iglhaut a few months to complete the 4WD conversion. The process is done completely within their facility in order to ensure top-quality control. Turnaround times, from van purchase to delivery, right now for a U.S. Sprinter 4WD conversions is five to six months.

“Finishing off the Iglhaut upgrades is a rear door spare tire carrier and a centrifugal snorkel, which makes the van sound like a fire-breathing dragon.”

Basic all-wheel-drive Sprinter conversions start at approximately $50,000 and can go all the way up to $95,000. That price includes all logistics, shipping and the conversion itself, but not the base van. That means that a U.S. Iglhaut converted Mercedes Sprinter will cost from about $90,000 to about $145,000.

As a side note, Iglhaut also converts the Mercedes Metris van to permanent all-wheel drive with up to three locking differentials. Ultimate off-road minivan? 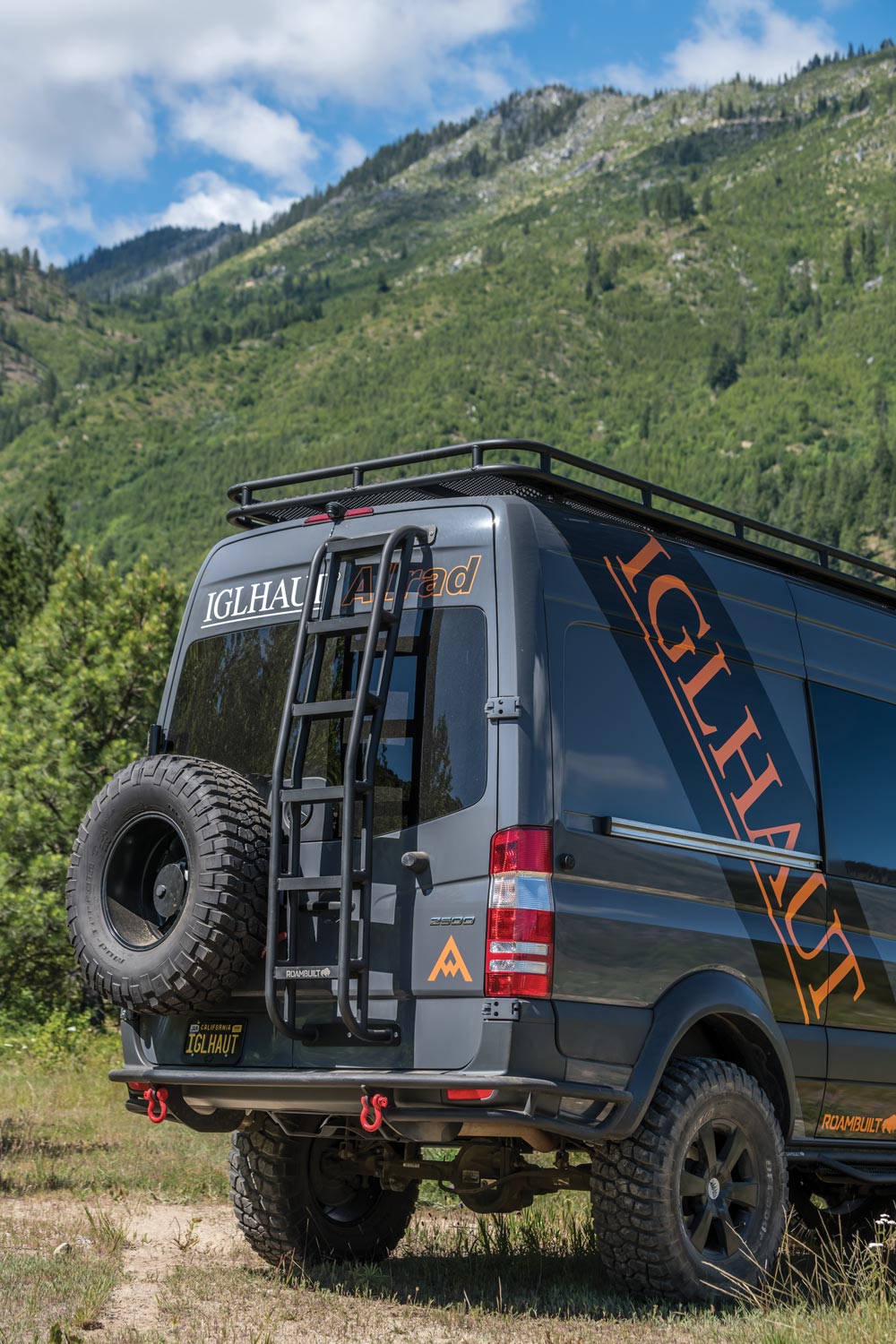 Iglhaut is a Worldwide Mercedes Van Partner and therefore their conversions are able to retain the factory Mercedes warranty on the base vehicle. Iglhaut also provides a two-year warranty to private owners and one-year for commercial clients.

Kuttner’s U.S. show truck started life as a 2017 Mercedes Sprinter Crew two-wheel drive. Now it has everything Iglhaut offers. The star of the show is, of course, the permanent 4×4 system with 50/50 power split and a 1:2.5 ratio selectable high/low transfer case. Three electronic differential locks make this beast nearly unstoppable off road. Under the truck you’ll find bigger front brakes, upgraded leaf springs, and a full host of steel skid plates. Thirty-seven-inch BFGoodrich M/T tires are fitted on 18-inch alloy wheels, which takes some serious wheelwell enlargements and custom fender flares to accommodate. Finishing off the Iglhaut upgrades is a rear door spare tire carrier and a centrifugal snorkel, which makes the van sound like a fire-breathing dragon.

Besides all the quality Iglhaut upgrades, this van also has a full complement of exterior metal from Roambuilt; specifically, Roambuilt’s brand-new Safarirack 2.0 roof rack, rear door ladder, rear tube step bumper, side steps, and front winch bumper. The rack is fitted with five Hella 4000 rally lights, while the bumper is fitted with two Hella lights and a Warn Zeon 12-S Platinum winch.

The main use for this remarkable Sprinter is as the showpiece for Iglhaut Allrad USA. This means that Kuttner travels to a wide range of shows all across the country to drum up sales. This has led him to make the van comfortable, both while traveling and around camp. The hard parts on, around, and under this Sprinter truly make it adventure ready.

While the living area in the van is still a work in progress, Kuttner chose Adventure Wagon’s New 2.0 Interior Conversion Kit as the base for the build out. The system features sound dampening insulation, dual Maxxair fans, Lumicoin LED lighting, bamboo wall and ceiling panels, a wiring loom, and lots of L-track. The Adventure Wagon interior system uses a powdercoated subframe to which the anodized L-track is attached. The system provides tons of tie-down possibilities and makes sure nothing comes flying off the wall while going down tough trails. This kit has great sound dampening and insulation and offers tons of overhead storage bag and bed system options. 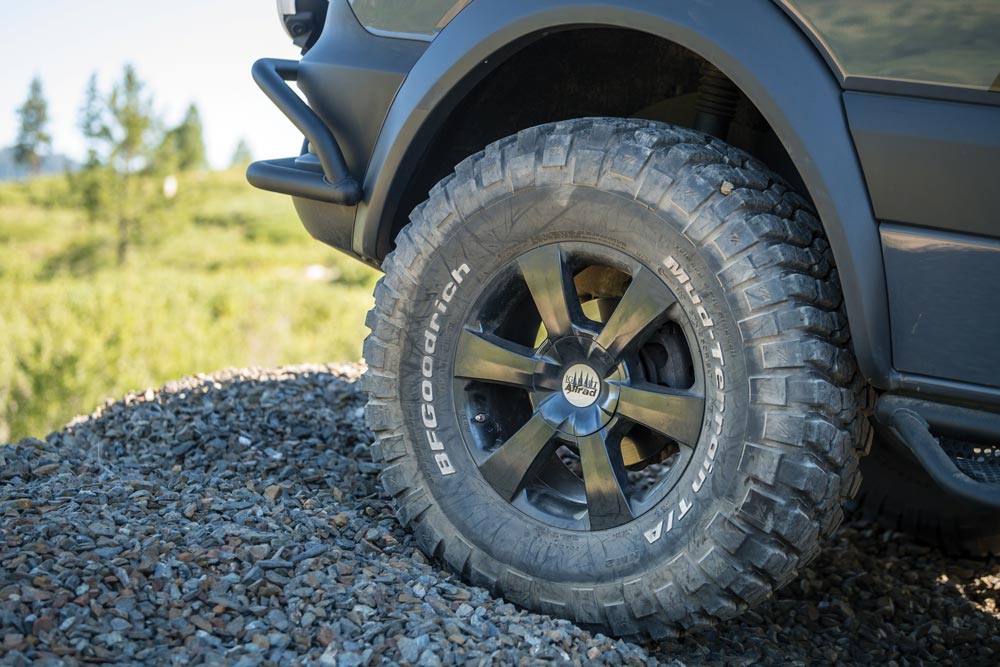 Yes, those are 37-inch tires on a Sprinter van. 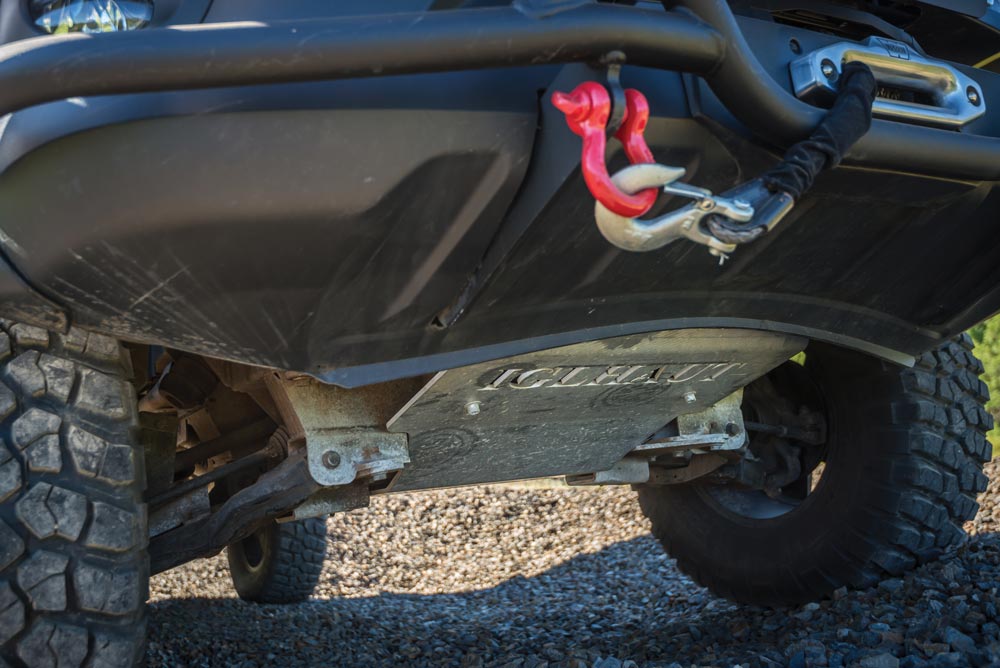 Eventually, Kuttner plans to completely build out the van with diesel heat, hot water, and a cooktop, for a completely one-fuel system. A kitchen galley with sink and fridge, an Adventure Wagon auxiliary battery system, an sPOD system, and a Goal Zero power station are also in the works. Kuttner has even envisioned a Japanese soaking tub and Japanese sliding doors separating the cab from the camper area for the ultimate boondocking van life setup.

Kuttner’s show van has all the bells and whistles Iglhaut offers, except a 48-gallon aluminum fuel tank option, which replaces the 28-gallon OEM tank. Kuttner is trying to stay one step ahead and has a second van coming back from conversion in Germany this summer: A 2018 144-inch Cargo Sprinter in light gray with every option available from Iglhaut. Since Kuttner can only drive one van at a time, one of the two will then be available for sale later this summer. Besides taking individual orders, Kuttner is also dreaming up his next big build. He’s currently dreaming up plans for a 2019 Sprinter or a Sprinter 4500 Chassis Cab with a BoXmanufaktur Expedition box. We’re stoked to see what he brings to America next. 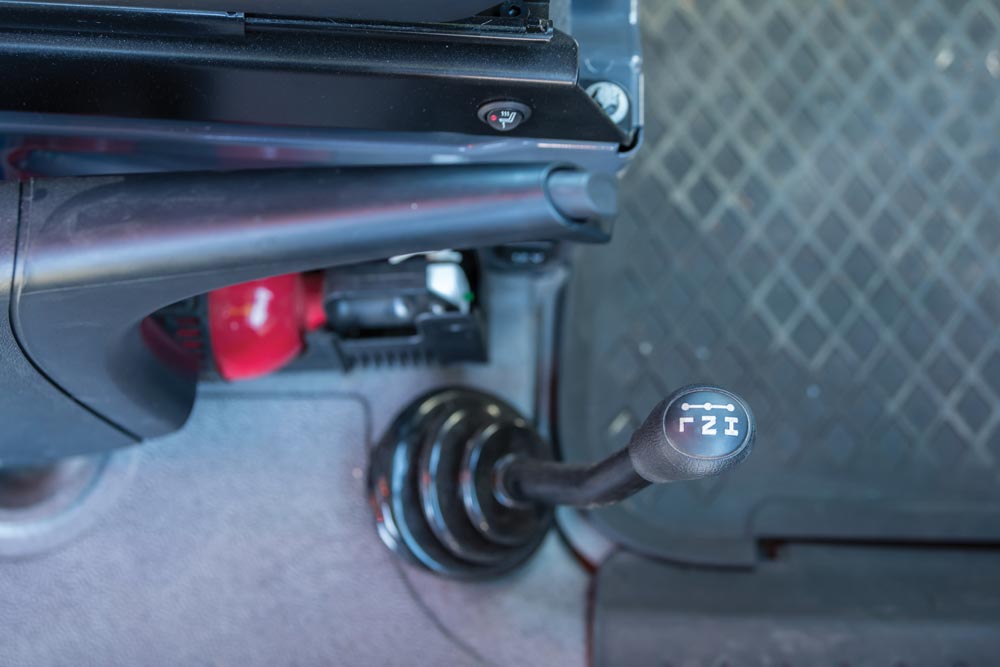 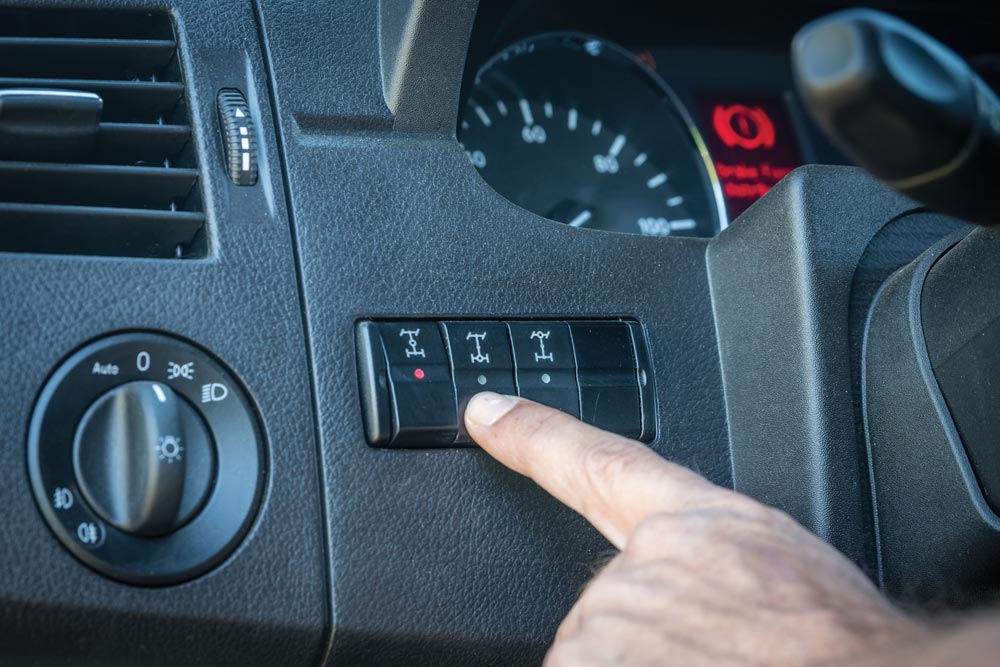 “The first Iglhaut Mercedes dealership opened in 1965 in Marktbreit, Germany. The dealership quickly gained a reputation for superior quality and craftsmanship, and a can-do special-projects ethos.”