→ Submit your rig and win a Tread magazine feature of your truck! ←
Get the Magazine
Features, Vans & Campers, Vehicles
Story and Photos by Joshua Elzey

Vintage Sunrader Gets A Renewed Life 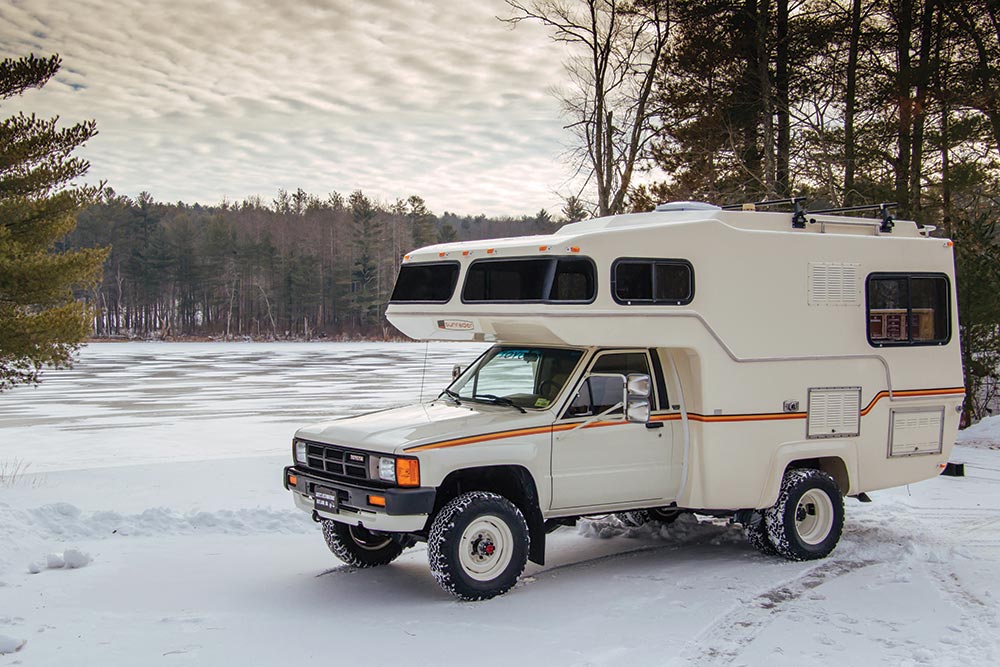 A 35-year-old Sunrader, Restored to Relaible for a Long Adventure

Nick Scheibel purchased this vintage 1984 Toyota Sunrader “factory 4×4” freedom vessel camper in 2020 from a gentleman named C.J. who was just down the coastline from  Massachusetts in New Jersey. C.J. didn’t want to sell the Sunrader to just anybody with cash, as he had owned the Toyota for several years. He was happy to pass ownership onto Nick, knowing that he’d take care of the Sunrader and eventually put it back on the path to restoration.

While many other motorhomes are known to leak over time, the Sunrader’s fiberglass robust design for the cap shell prevents this type of damage, making it very desirable. As an added perk, maintenance is greatly reduced.

Nick was in the market for something to take out west during the winter months to live out of while traveling to different mountains to snowboard and ski. The Toyota, already at a very low mileage given the age, came to Holden, Massachusetts, to start its next leg of life for a journey yet to start.

It was no surprise that he would reach out to local Greg’s Restorations in Rutland, Massachusetts, being one of the few shops in the country to specialize in classic Toyota pickups and vintage Land Cruisers. Nothing like having your new project in good hands just a few miles away. Talk about a win-win.

Greg’s Restorations owner Greg started out restoring classic Land Cruisers at his shop, which later gave him the opportunity to restore the Holy Grail black 1985 Toyota pickup from the Back to the Future franchise. That put him on the map for these classic pickup restorations.

The truck was originally brought into Greg’s facility to have the typical work that any restoration would start with, getting it tuned up and mechanically sound. In this case, the vintage Sunrader needed to be reliable to make the first big upcoming journey, one it had not done in many, many years. His first trip was to travel cross country from Rutland to British Columbia, Canada, to spend the winter living out of the truck while traveling from mountain to mountain, chasing fresh snow to go snowboarding with friends. Nick certainly did not want to worry about the truck’s integrity.

…the vintage Sunrader needed to be reliable to make the first big upcoming journey, one it had not done in many, many years. 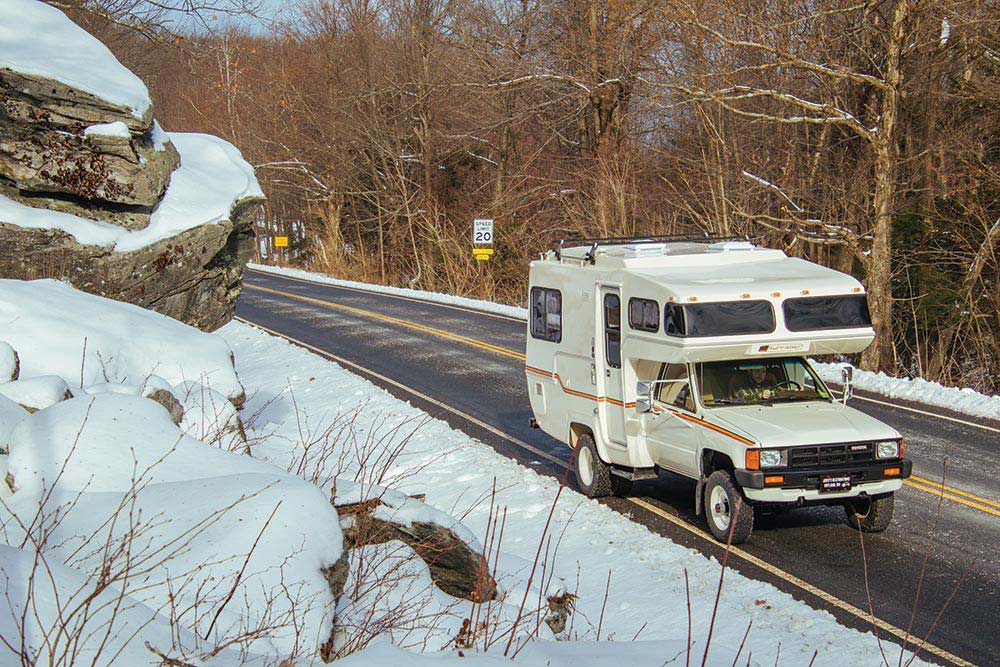 The color of the camper is 033 Factory Toyota White. Greg’s Restorations used a single-stage Sherwin Williams automotive paint on the camper body and ultra-series basecoat / clearcoat on the cab and fenders.

After he made the 6,000-mile trip cross country and back, the Sunrader needed some much-needed love due to being 35 years old and never restored. Everything had been thoroughly gone through and made reliable to keep this vehicle on the road for many years. Luckily, the vehicle only had just over 80,000 miles on the odometer.

After Nick made the 6,000-mile trip cross country and back, the Sunrader needed some much-needed love due to being 35 years old and never restored. 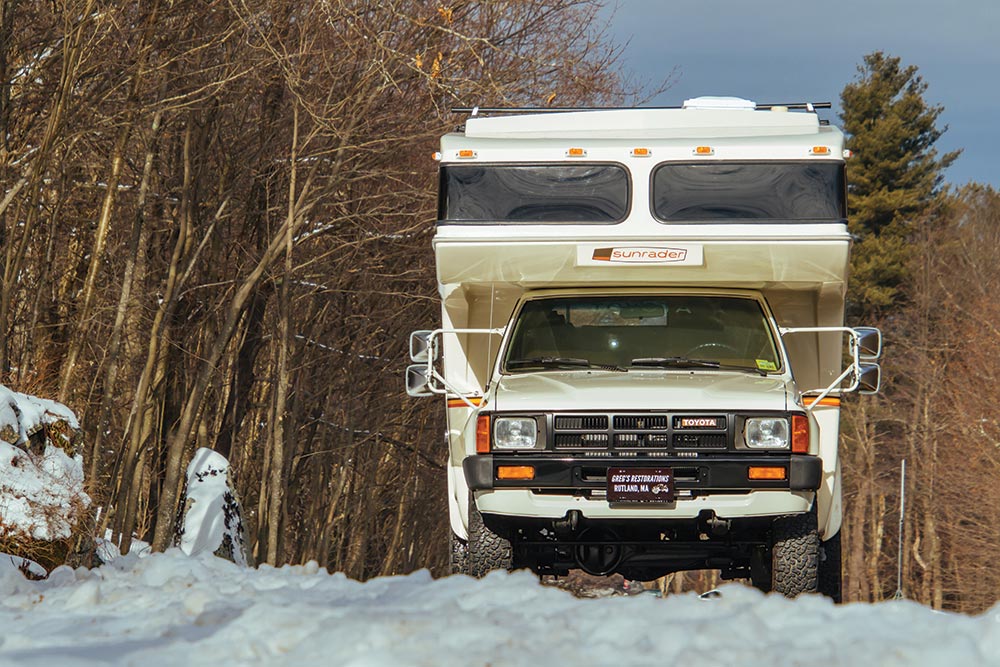 The side mirrors were restored to original as they started to rust. The shop found NOS marker lights for clearance lights, although they had to buy from 10 different vendors to get enough.

The vintage Sunrader is surprisingly capable offroad, perfect for any hard-to-get overlanding-type places that most two-wheel-drive trucks with cabovers or vans could not reach. Despite how cumbersome it looks, the Toyota Sunrader packs a lot for the size of the camper. And with four-wheel drive, this retro camper is perfect for snow seeking adventures.

What Makes a Sunrader Special?

While this vintage camper is not as rare as the on-screen Marty McFly special, this Sunrader is only 1 of 17 in existence for this generation pickup (1984-1988) and may be one of only a few left for the 1984 model year. Sure, they made plenty of the two-wheel-drive models from various different brands (Dolphin, Sunrader, Huntsman, Winnebago, and so on), but this is by far the rarest because it came from the factory with four-wheel drive and a lift kit. There are many conversion enthusiasts who switched the two-wheel drive to not only four-wheel drive but also to dually versions; however, this dually came from the factory. As the tiny home trend adopted the more nostalgic camper motor homes, it also led to current trends and expectations, as seen with the Toyota concept debut at SEMA 2021, Tacozilla, that is all the rage. 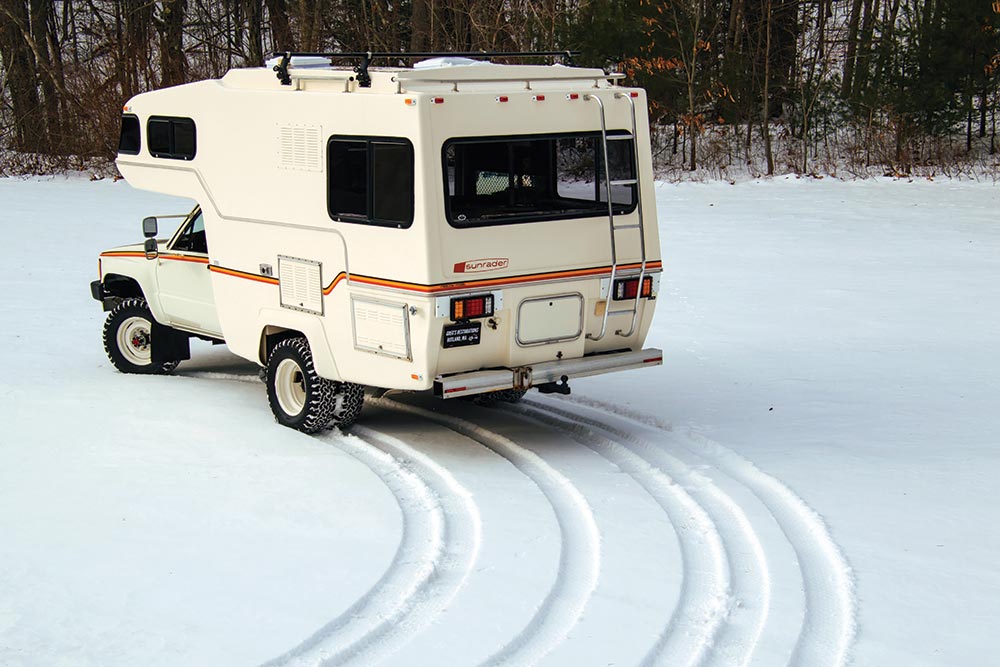 The fiberglass was in need of restoration, and paint, Greg’s Restorations reapplied the decal designs. They also upgraded the roof vents to have electric fans for better air transfer throughout the body after a long day of skiing. 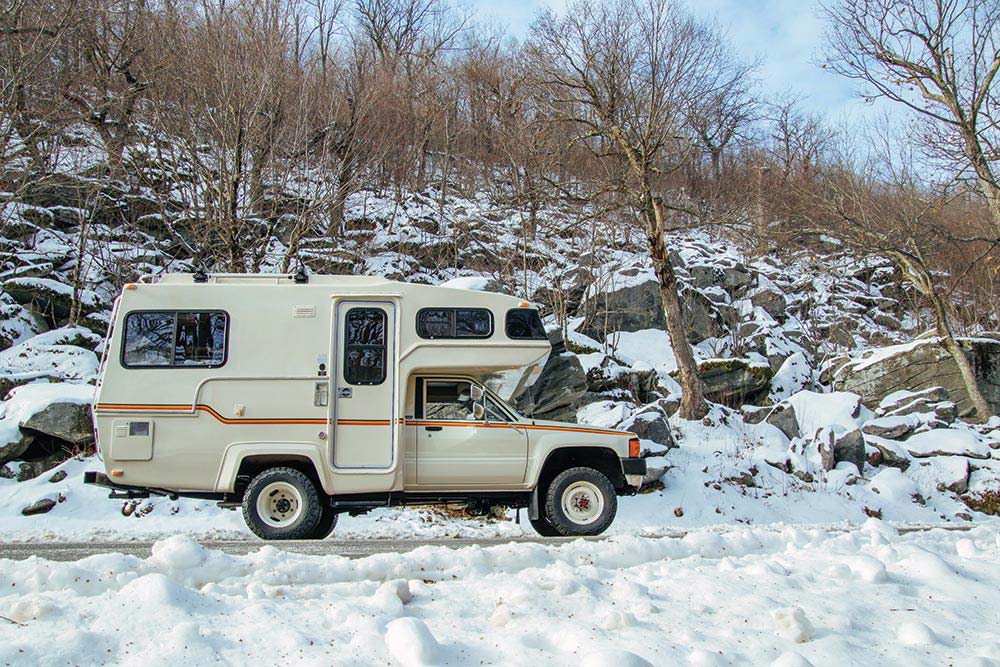 The Sunrader makes an ideal ski bum vehicle and was noted as such by many during the photoshoot near the Wachusett Mountain slopes.

How about the Performance?

This camper is about as stock and out of the factory as you can get. They have upgraded the engine to an LCE performance header and free flowing ceramic-coated custom exhaust. This required upgrading the stock radiator to an aftermarket larger aluminum radiator with electric fan setup to help keep it cool while pulling its own weight up hills.

The camper came stock with a solid front axle with closed knuckles and disc brakes, which is one of the key features everyone loves about this generation truck. 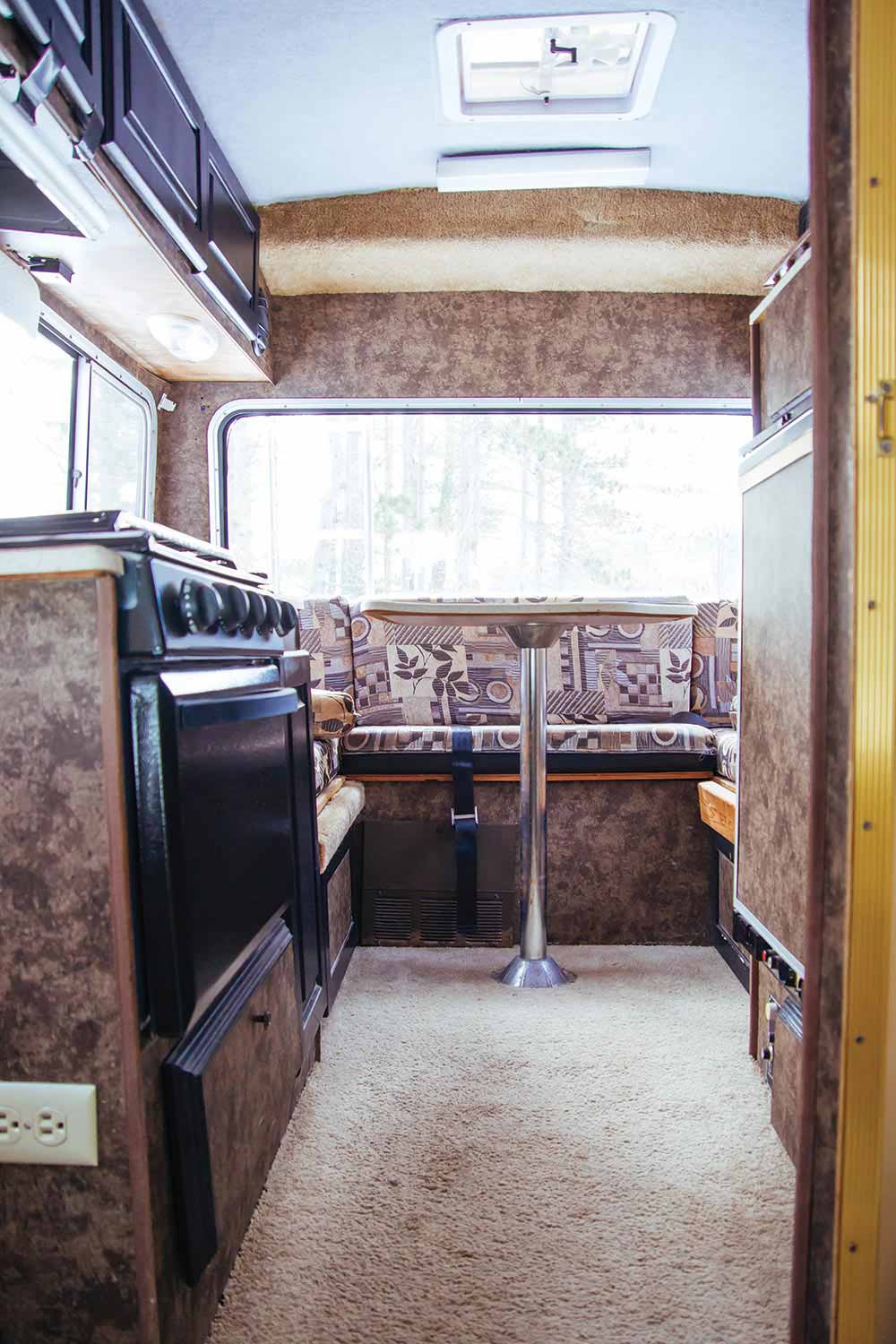 The camper holds a shower/toilet just behind the driver seat, while further back is a kitchenette with a stove/oven. A propane heater with a thermostat allows for hot water and cooking. The rear dinette converts to a bed surrounded by windows for a great view of the mountains as well as a top bunk over the cab itself. There is even an upgraded sound system.

The engine is a stock 2.4L 22R Toyota engine with about 100 hp out of the factory. The 1984 pickup models only had carbureted engines. It wasn’t until 1985 that they introduced the 22RE with fuel injection. The 22R was well-known for a strong block with large displacement; however, it is not great for high-revving applications.

The vehicle has its stock drivetrain with leaf spring suspension, disc brakes in front, and drum brakes in the rear. The camper came stock with a solid front axle with closed knuckles and disc brakes. (One of the key features everyone loves about this generation truck.) The models switched over to IFS suspension in 1986 while trying to compete with other competitors for ride quality. Also, this truck has a W56 factory five-speed manual transmission with 4:10 gear ratio in the axles.

The Body Was in Need of TLC

Amazingly, the body on the Sunrader was in decent shape considering the vehicle’s vintage, which made it a great start to restore in the first place. Over time, the body got some cracks and gouges in the fiberglass and even some surface rust, but it was in great shape overall. Due to having a factory flaw that required re-work, the side door was the biggest job on the camper. Then, they updated all the weatherstripping in the doors and seal between the camper body and metal cab. 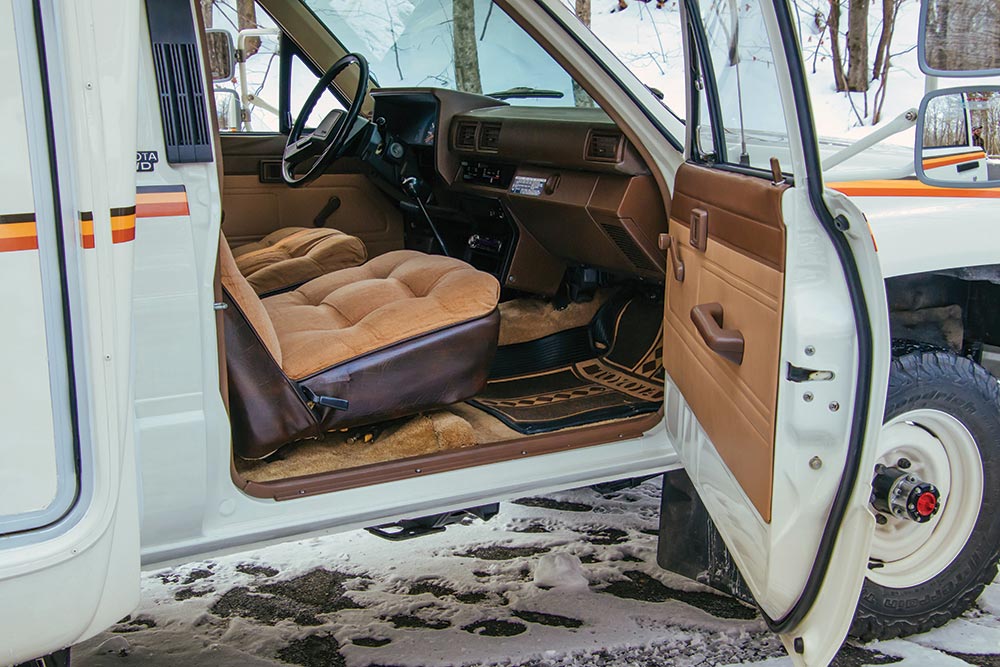 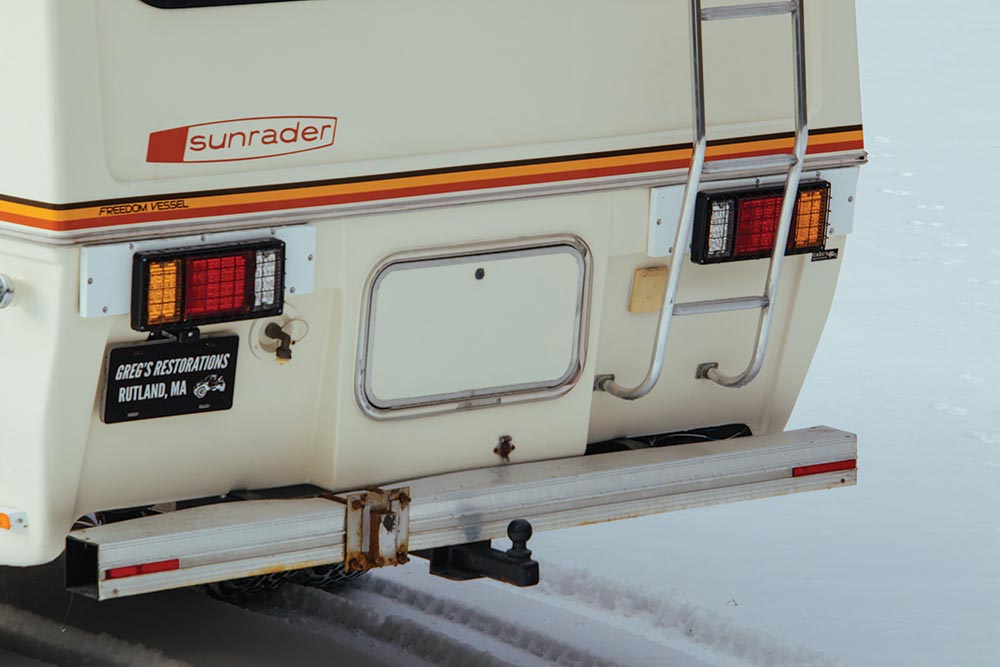 The taillights were upgraded to LED with metal off-road guards for an overland look.

Since no one provides a reproduction of the gasket between the cab and body, Greg’s Restoration had to improvise with a white garage door bottom seal they sell at the big box stores. 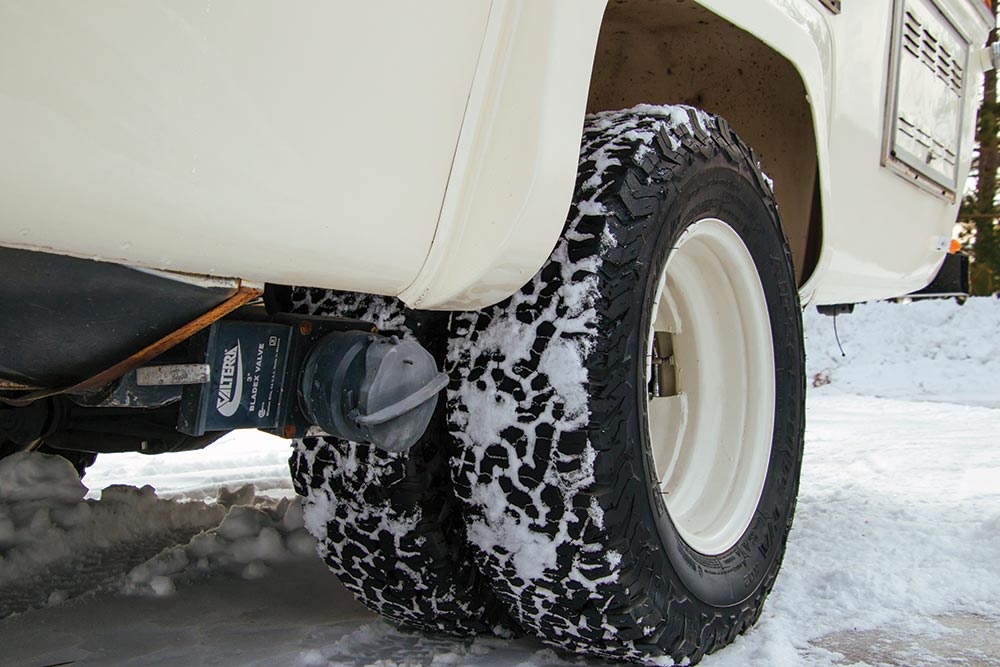 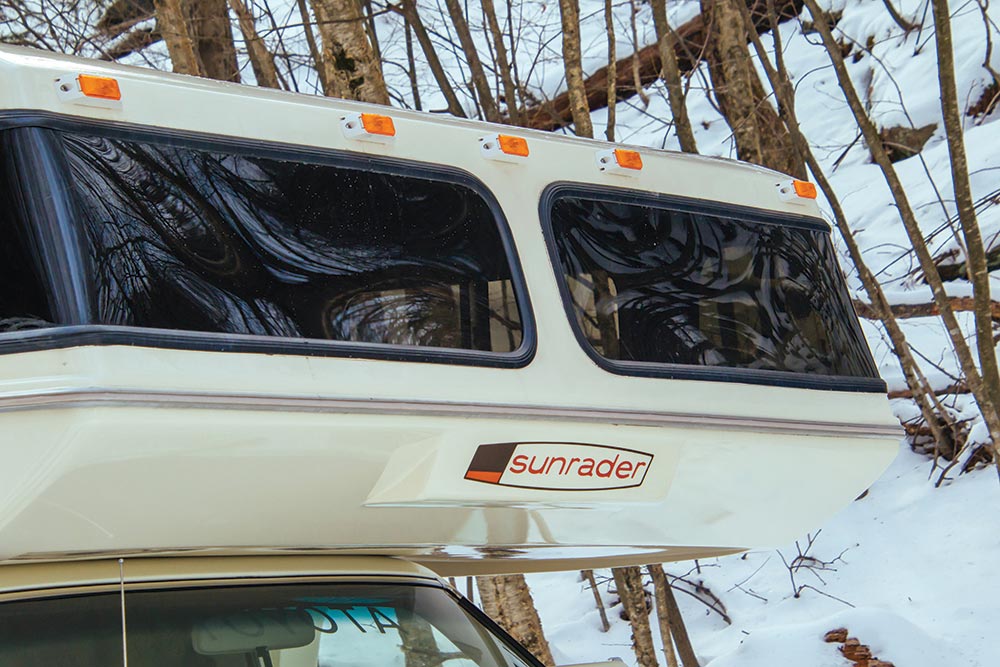 Which Way to Go for Paint and Design?

The color of the camper was originally two different whites, which was not too uncommon back then. Some would fade differently pending exposure to the sun. Greg thought it would be better to have the entire camper match. This required several employees to push Greg around on scaffolding to cover so much surface area with nearly three gallons of paint. Not only did they paint-match after the fiberglass repair, but they also reproduced the factory decals on the side of the vehicle. While updating the design was on the table, given the rare heritage, they decided that keeping the factory look was the best option.

This Toyota Sunrader overland camper is definitely a time capsule and brings anybody right back to the early 1980s. 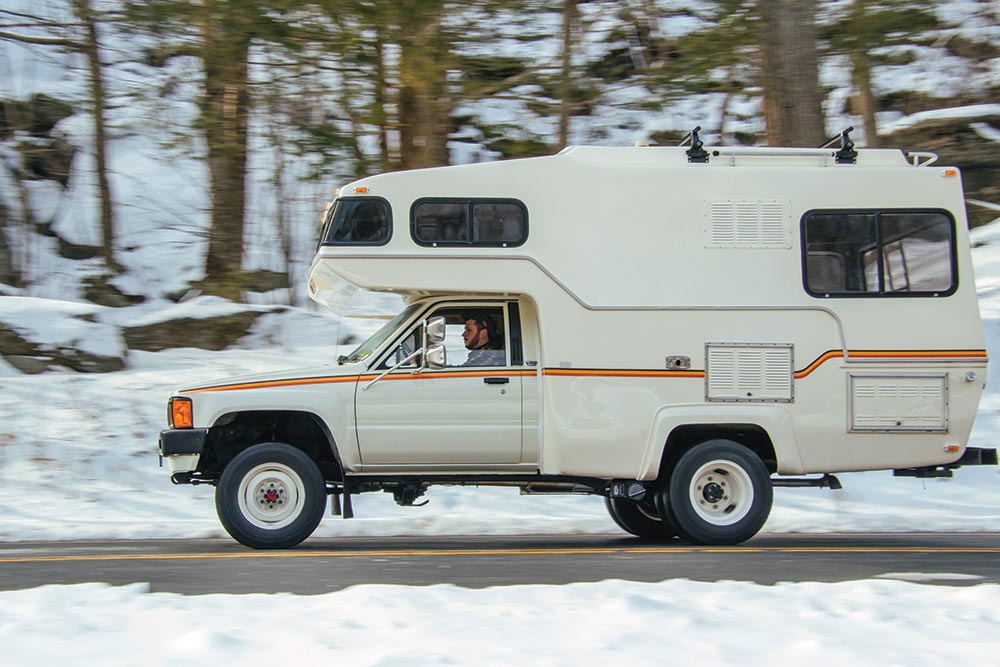 Soon to come is a full interior restoration, which had been on the backburner because of its good condition.The interior comes with many of the creature comforts one would need to just drive to a location, park, and enjoy the fresh powder.

This Toyota Sunrader overland camper is definitely a sweet vintage time capsule and brings anybody right back to the early 1980s.

Nick has already taken it on his adventures to chase bluebird days this winter and plans to use it more as he gets out this summer.