→ Submit your rig and win a Tread magazine feature of your truck! ←
Get the Magazine
Features, Trucks, Vehicles
Story by Kelly Nomura
Photos by Matt Girgis 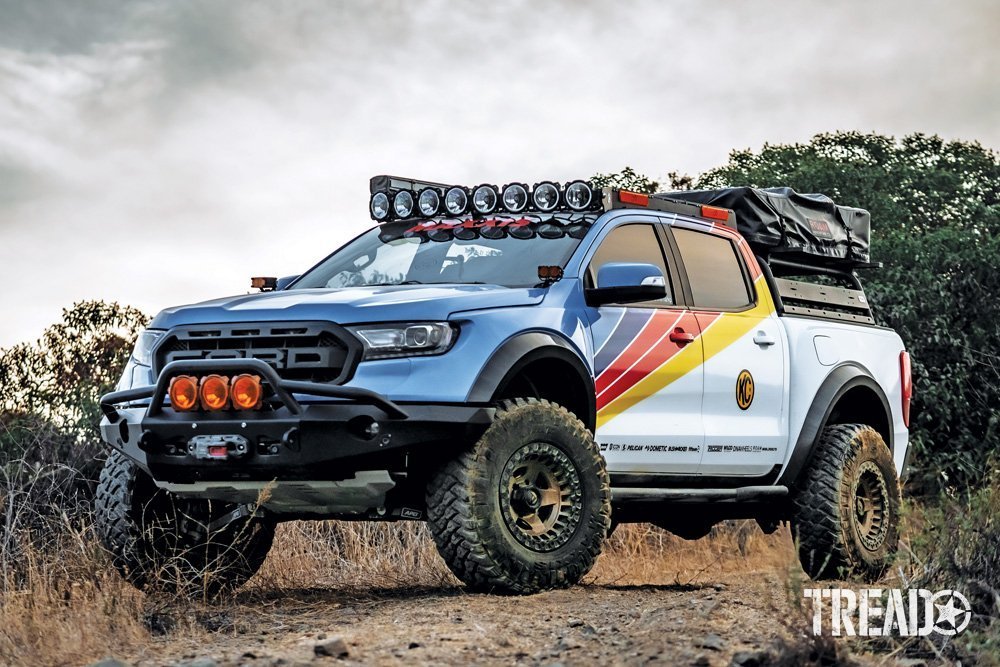 Creativity fuels style and the desire to stand out from the crowd. Whether it be fashion or a vehicle, most like to put an individual spin or a personal touch to a look. Such is the case with the 2019 widebody Ford Ranger owned by Mark Porudominsky. His initial vision came together pretty quickly after inspired at his first off-road/overlanding event.

Of course, those who have artistic sense running through their veins aren’t necessarily happy with just one go-around. Especially those coming from the automotive enthusiast world. Within a year, the Ranger would see a second version. His individuality took over and creativity took hold when he stopped at APG to pick up a part. Instead, that visit was the catalyst to what you see now, version two of “Rainbro Ranger.”

We are very much into the performance of our vehicles and want to continue to exceed the limits that our vehicles keep finding. —Mark Porudominsky. 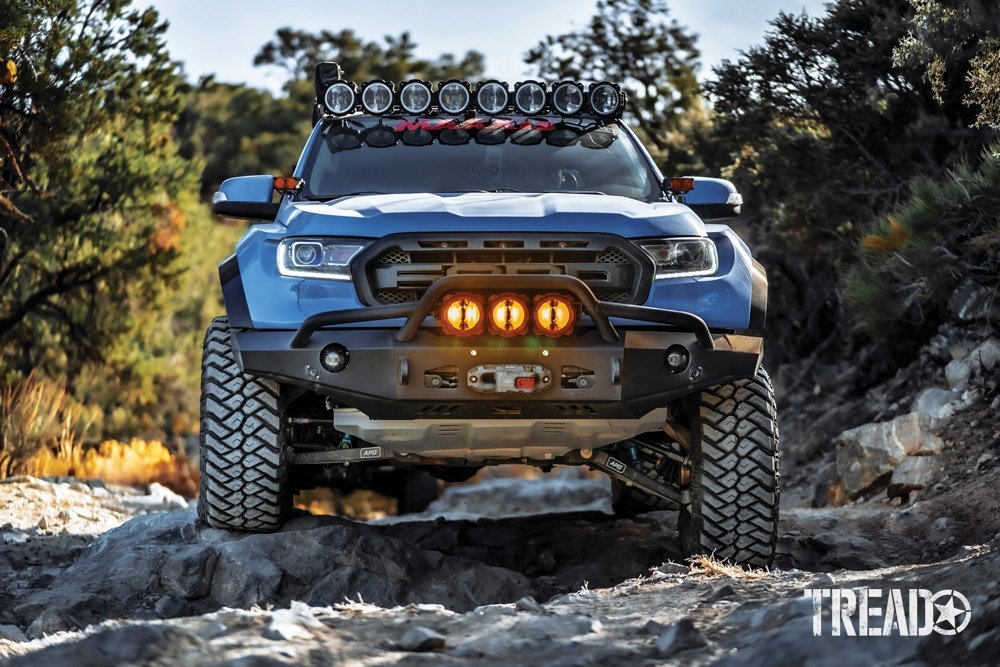 A head-on profile shows off the new widebody look and the APG lower control arms and suspension doing work.

Inspiration and the Road to SEMA

Like many before him, Porudominsky made the shift from the motorsports world to the land of adventure and dirt. As more of his friends became involved in the off-road and overlanding lifestyle, it was natural for him to follow suit. All it took was a trip to his first off-road event put on by KC HiLites, Summer Camp 2019. There he met many new faces whom he now considers family. It was also where he met Yeti and Yolo. They arrived in the Danger Ranger, an older-generation Ford Ranger that uses an old race livery to make it stand out. Porudominsky took to the look and wanted the same loud-yet-classic livery to also pay homage to Walker Evans. It was then he got to work on a rendering and jumped into a SEMA build. 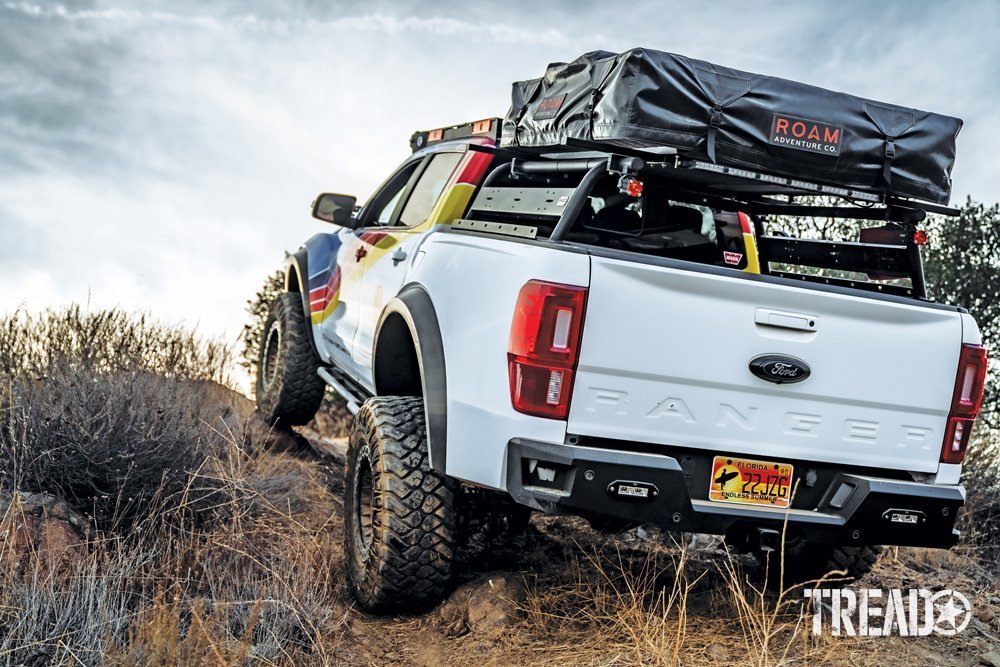 Hill climbs happen with ease while on the way to find and get to the best campsite.

Building a top-notch SEMA Show vehicle was not a new endeavor for Porudominsky. The previous year, he also had one of his vehicles builds shown, a well-known 800-plus horsepower Golf MK4 R32. The work, dedication, and fast timeline were no match for Porudominsky. He hopped on the phone to call upon industry friends and acquaintances to help him get this new Ranger vision completed in time. And as you would have guessed, the pieces fell into place. He was able to get the Ranger into the Maxxis booth at the 2019 SEMA Show.

We got the opportunity to meet Porudominsky right before the SEMA Show. We were already impressed with the truck. The Ranger is a daily driver, but that doesn’t stop him from taking it on the trail every chance he gets. In fact, by the time we saw him again a few months later, he was out almost every weekend with his new toy. If there is someone who took a SEMA vehicle build, turned around, and put it to good use, it was Porudominsky.

I now walk over obstacles that used to be a challenge. I will now out perform any midsize truck out there. 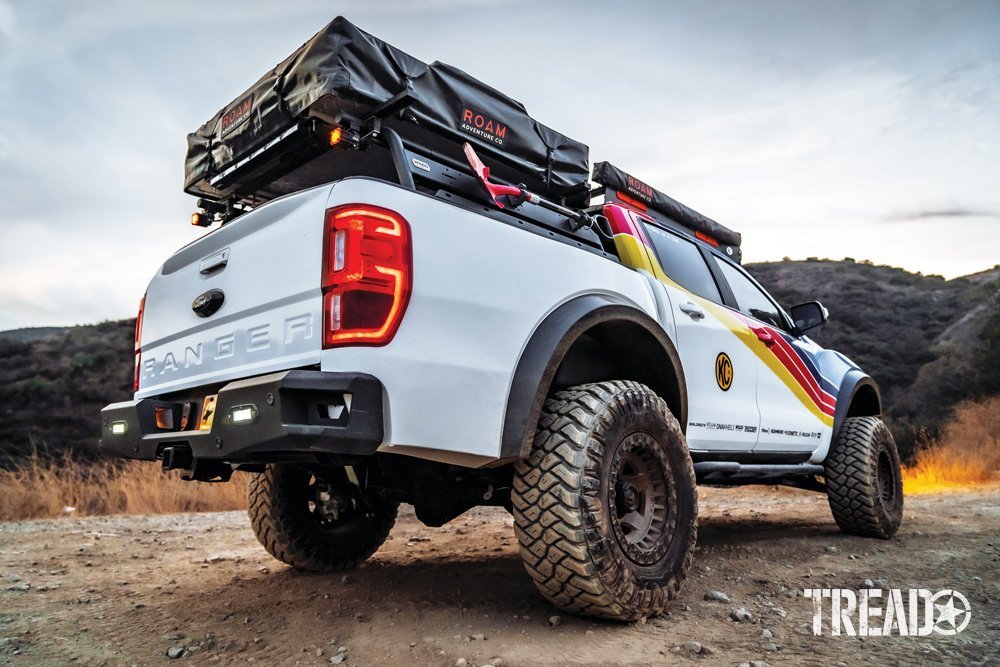 The Ranger holds its own out on the trails. It is protected from injury underneath by Shrockworks underarmor all the way to the transfer case and sliders. A Warn Ascent bumper and Zeon 10-S winch up front give it extra protection with the ability for recovery should the truck get stuck.

Meanwhile, solid traction and forward movement are provided by Fuel Offroad Warp beadlocks. They are 17.9×5, with -15 offset wrapped in size 35×12.5 Maxxis Razr MT tires mounted. The set-up was balanced and aligned by DNA Wheels OC in Orange, California. Sunset and night runs are no problem for the 2019 Ford Ranger, which keeps going with help from KC HiLites. Around the truck, you’ll see KC HiLites Pro 6 light bar up top, 10 LED C Series, two Flex Duals, a set of Flex Singles as dust lights, and a Chase Bar. He installed a Trigger Controller Six Shooter to help control his electrical, and switches for all that lumen. Fully loaded with all the gear and ready for anywhere Porudominsky goes.

What usually catches the eye when you see this truck is the colorful wrap, or as Porudominsky calls it the livery design. Installed by Mike’s Tint Shop the orange, red, yellow, and blue design is what led to the truck’s nickname, Rainbro Ranger. With the newest additions, the design pops much more. In fact, Porudominsky shares with us a memorable experience of some parking lot admirers.

As he explains it, “One day I pulled up to the mall in the Ranger. It was barraged with a bunch of little kids who could not believe they were seeing a real-life toy truck. One kid said, ‘If I dreamt up a truck to drive forever, this would be it.’” With the parents’ permission, he took them for a spin around the parking lot. “I’ve literally never seen a bunch of kids so happy. That really made my day,” Porudominsky says.

The essence and overlanding lifestyle is evident with this 2019 widebody Ford Ranger. This house on wheels is complete with Wilco bed rack holding the Roam Adventure Co. rooftop tent. It is used on his overnight trips to his favorite destinations. Places such as Anza-Borrego, with its amazing views and all the terrain, aren’t too far away for a weekend trip. He’s also traveled from California to Arizona and back through Utah and Nevada, but an Alaska to Patagonia trip is on his bucket list. 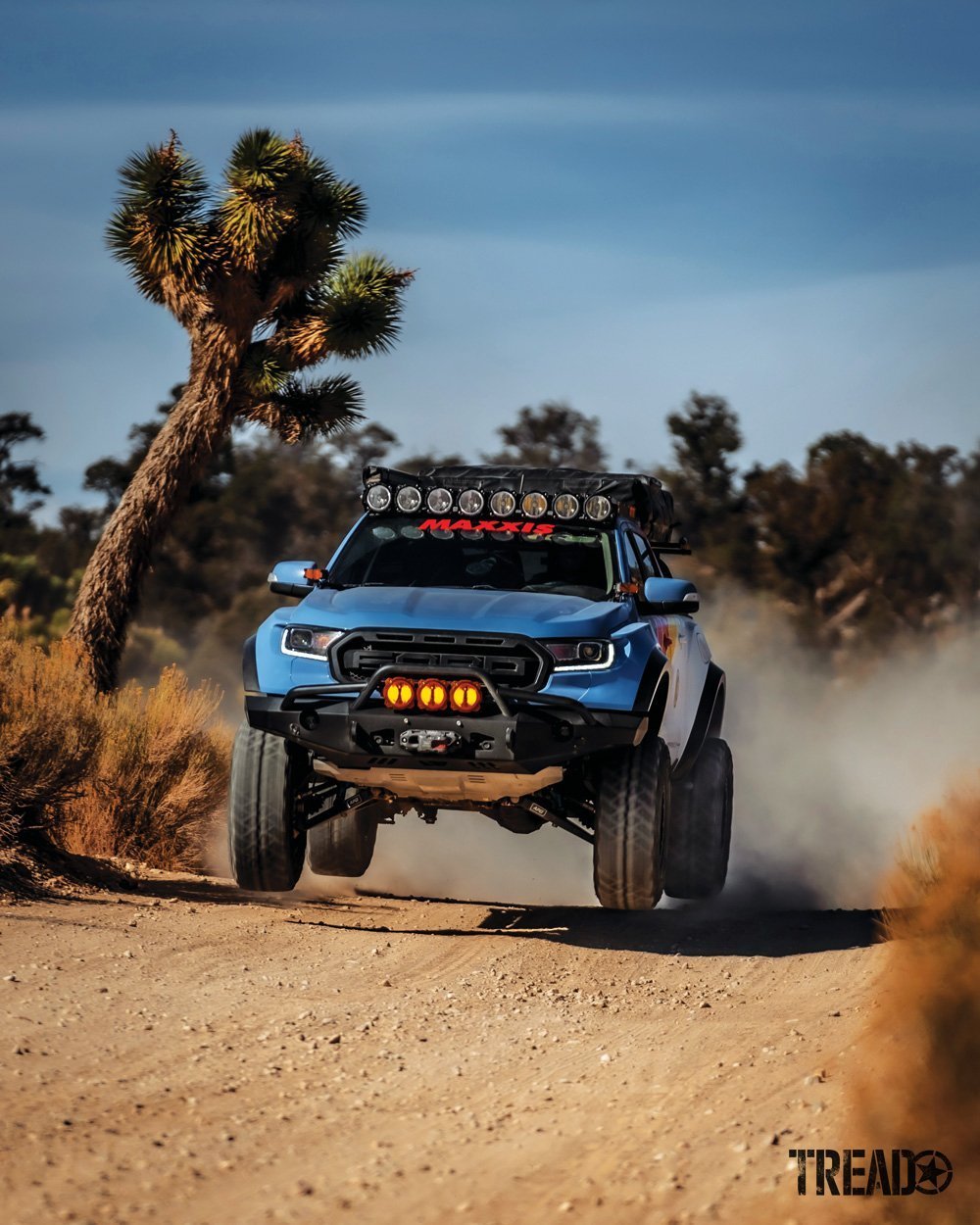 A Roam Adventure Co. rooftop tent and awning protect Porudominsky from the elements when out in the elements.

It’s trips like these that sparked the idea of Overland(ish), where Porudominsky and friends poke a little fun at the community and lifestyle they love so much. He comes from the rock climbing world. One packs light and as efficiently as possible, Porudominsky revels in the opportunity to throw everything in the back of his truck. In fact, they like to say that rather than being overlanders, they are more “overloaders.”

The 2019 widebody Ford Ranger is a daily driver, but that doesn’t stop [Porudominsky] from taking it out on the trail every chance he gets. 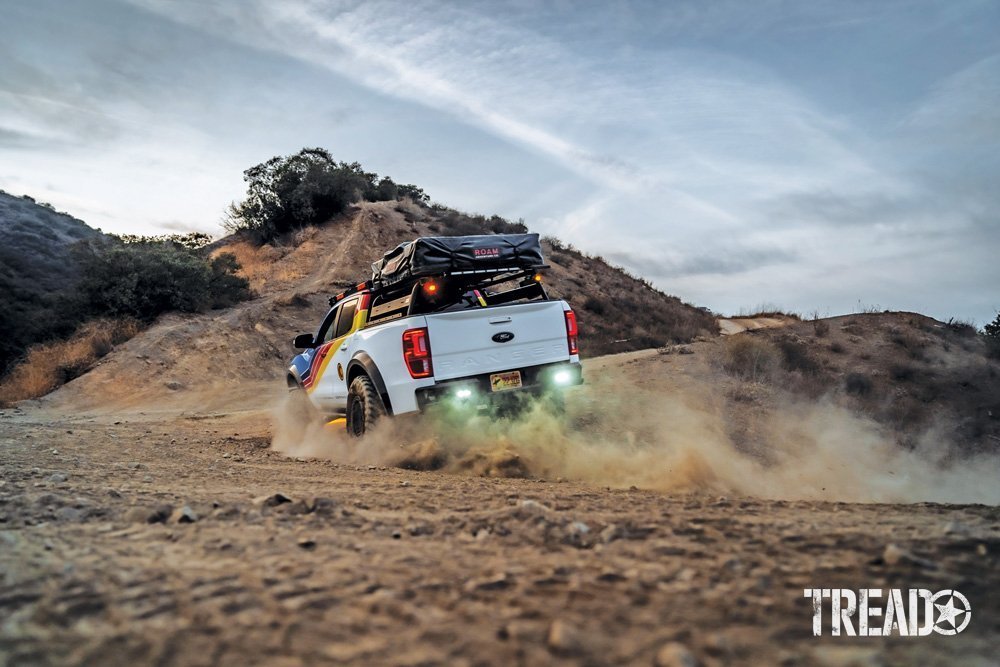 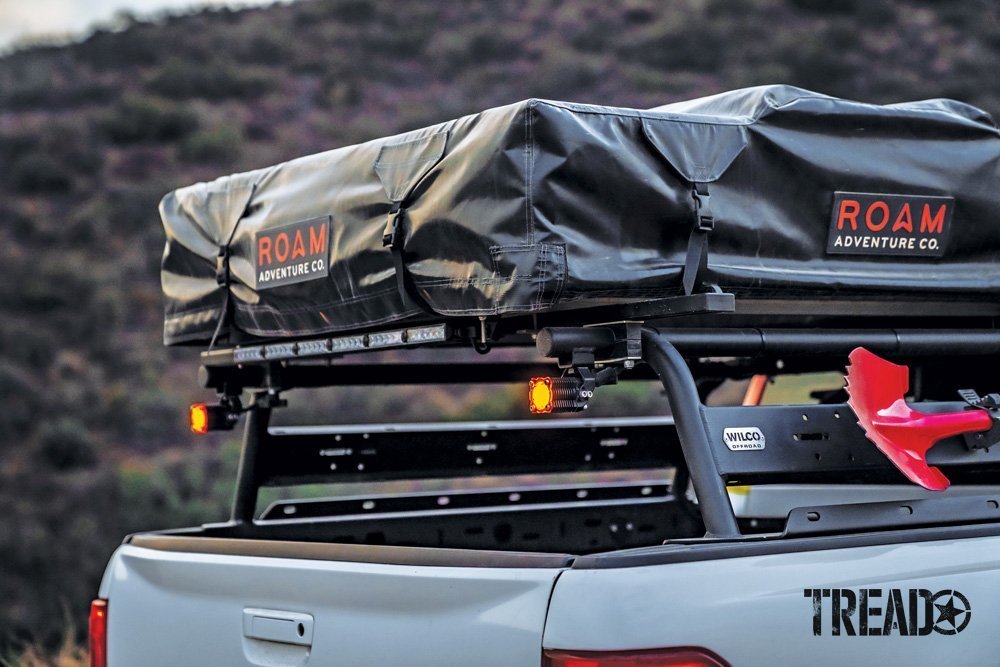 KC HiLites Chase LED lightbar and amber Flex singles help those behind him see in dust or dark.

With all the gear and equipment to go anywhere, they’ve been doing just that. Unlike other truck owners, Porudominsky stores his Dometic CFX3 55IM in the back seat, along with Pelican storage cases and gear. More storage is in the bed, but he doesn’t stack things too high to allow for more driving versatility. Not to be forgotten is that background and desire for performance.

“We are very much into the performance of our vehicles and want to continue to exceed the limits that our vehicles keep finding,” Porudominsky says. And that’s how Version Two came to be.

What he thought would be a quick errand, turned into a meeting with George and a tour of the establishment where he got to see molds and the plugs and carbon-fiber pieces in process, along with trucks being built. Porudominsky left mesmerized and convinced that that would be his next modification. He thought, “This was the ultimate version of the Ranger and anything else was just not good enough.” 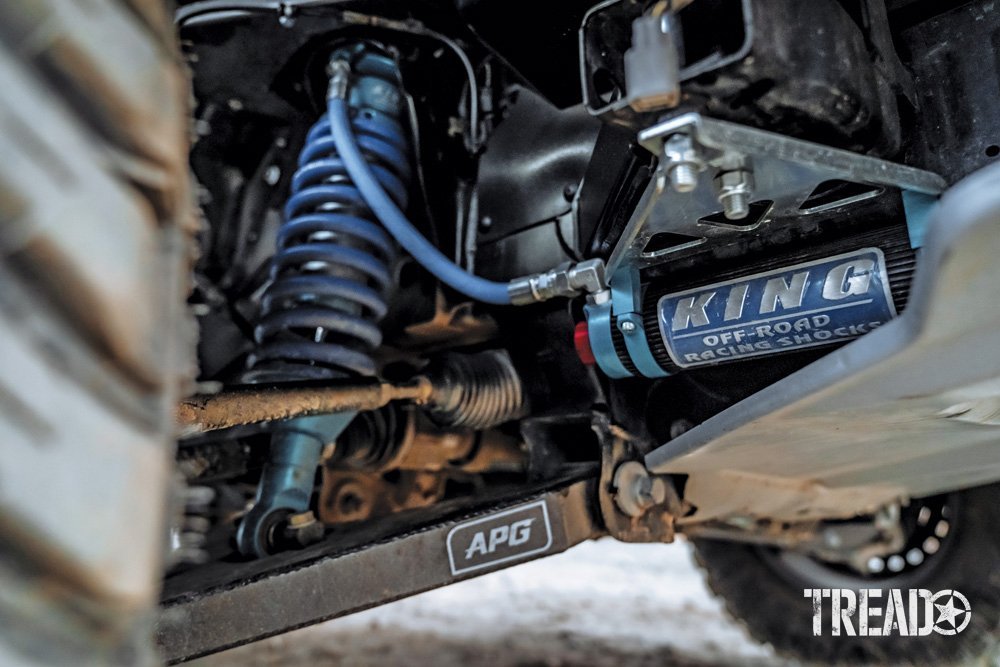 The suspension magic of APG is seen, complete with King Shocks. (Right) The Trigger Controller remote is mounted out of the way below the radio and climate control. Remote is also portable for ease of use. 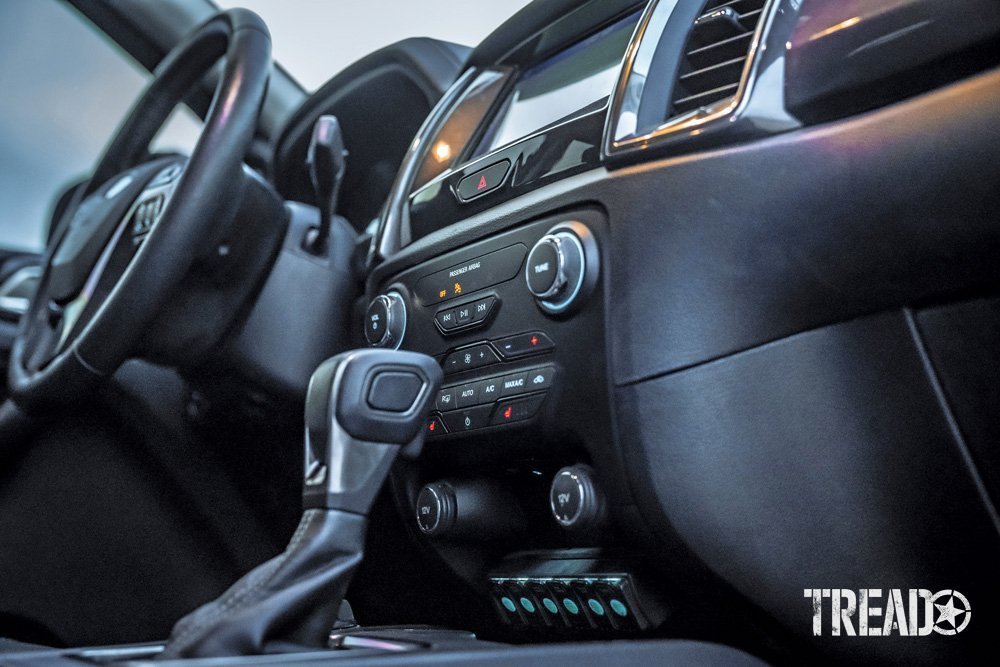 A KC HiLites Gravity Pro6 lightbar keeps the Ranger on the trail after the sun goes down.

Originally seventh in line to go under the knife, he waited to be ninth simply to match his favorite number and bring some positive mojo. The icing on the cake to this build is the APG widebody and suspension upgrade. They paired their in-house engineered upper and lower control arms with a set of long travel King Shocks suspension with external reservoirs for a match made in heaven.

They added axle extensions, tie rods, and a set of APG/Deaver rear springs. The fenders and bedsides were replaced with widebody carbon-fiber versions. APG even modified the Warn Ascent bumper to fit the new look. 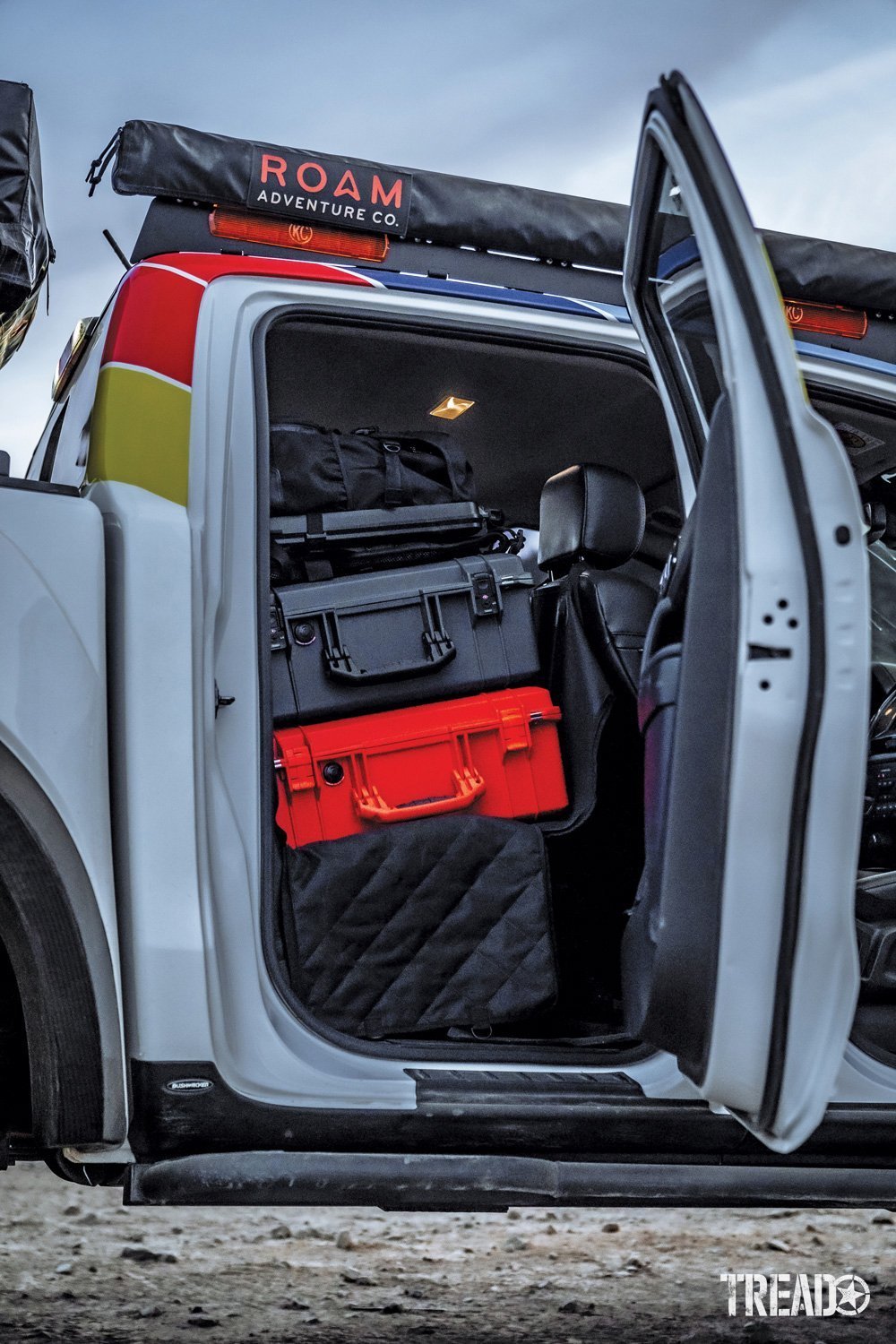 Pelican storage cases hold gear stacked in the back seat, and the Dometic fridge with ice maker sits behind the driver seat. Front and rear fenders, along with the bedsides, were replaced with carbon-fiber widebody components.

Coming from the rock climbing world … Porudominsky revels in the opportunity to throw everything in the back of his truck. In fact, they like to say that rather than being overlanders, they are more ‘overloaders.’ Porudominsky says, “I now walk over obstacles that used to be a challenge. I will now out-perform any midsize truck out there. For the need of a $50 OEM part, I am now one of the most modified Rangers on the planet!”

There are still some future plans for this 2019 widebody Ford Ranger. Remember, Porudominsky’s goal is to take it on a trip from Alaska to Patagonia. Within the next few months, it will undergo a rear seat delete and buildout, solar setup, and dual battery system. His plan is to not need a hotel on that big expedition. Additionally, he wants to be able to go off-roading in places not meant for trucks like his. Ultimately, Porudominsky wants the most capable version of the Ranger; where he can sleep in it, eat from it, shower from it. Basically, be Overland(ish).

For the need of a $50 OEM part, I am now one of the most modified Rangers on the planet!—Mark Porudominsky 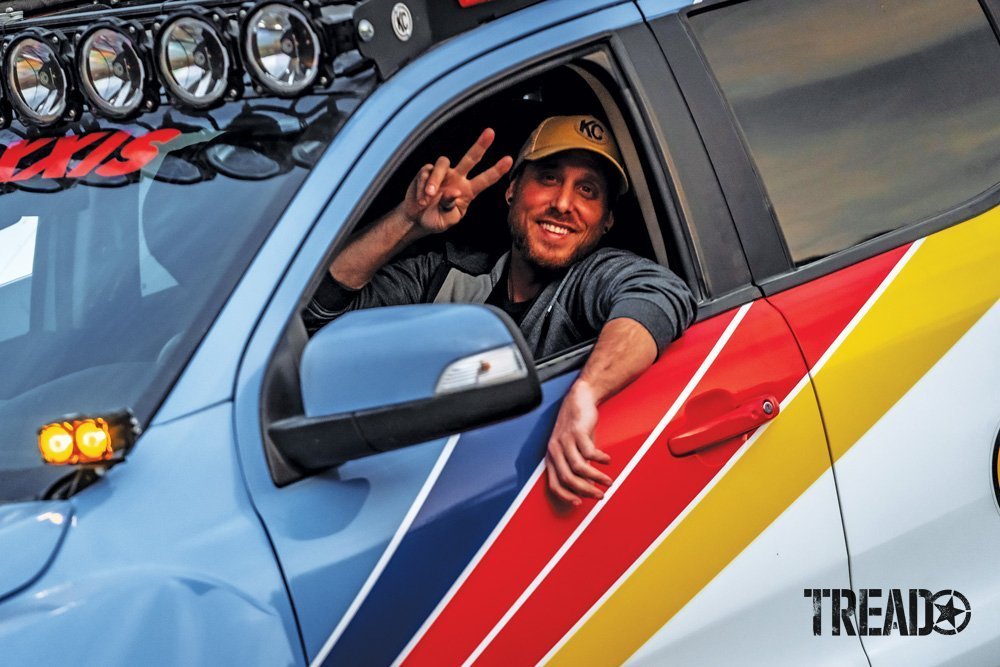 (Editor’s Note: A version of this story appeared in Tread March/April 2021.)