→ Submit your rig and win a Tread magazine feature of your truck! ←
Get the Magazine
Features, SUVs, Vehicles
Story by Mercedes Lilienthal
Photos by Nick McKay 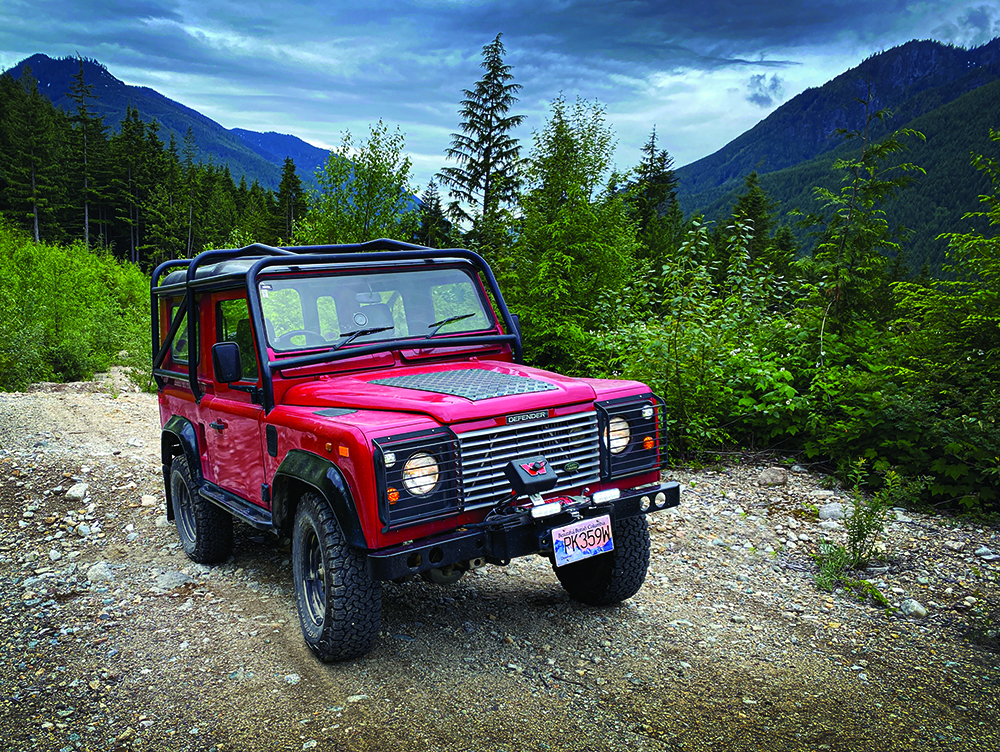 An imported Land Rover Defender 90 finds a new home with Canadian Nick McKay as his next customized off-roading adventure vehicle.

McKay caught the off-roading bug while attending Washington’s 2014 NW Overland Rally, after being a passenger on his first off-road trail run.

He recalled a feeling of extreme excitement when the 1998 Land Rover Discovery I he was riding in slipped into a deep V-notch, showing its underbody. After other overlanders checked on him as well as the vehicle’s driver, Spencer Whitney, they righted the vehicle and winched it back to safety.

Before he had even recovered, McKay had a smile the size of Alberta on his face: he was hooked.

After his unexpected adventure at the NW Overland Rally, McKay bought a “well-loved” 2008 Nissan Xterra. Four months later, he nicknamed it “Ourea,” and has been going on adventures in it ever since. Since then, the 34-year-old adventurer, along with his wife, Tina Rahn, has piloted many off-roading excursions with it.

McKay’s intention was to purchase an imported D110, put a sleeping platform in and use it as a base camp, ‘but when you’re on a limited budget, beggars can’t be choosers.’ 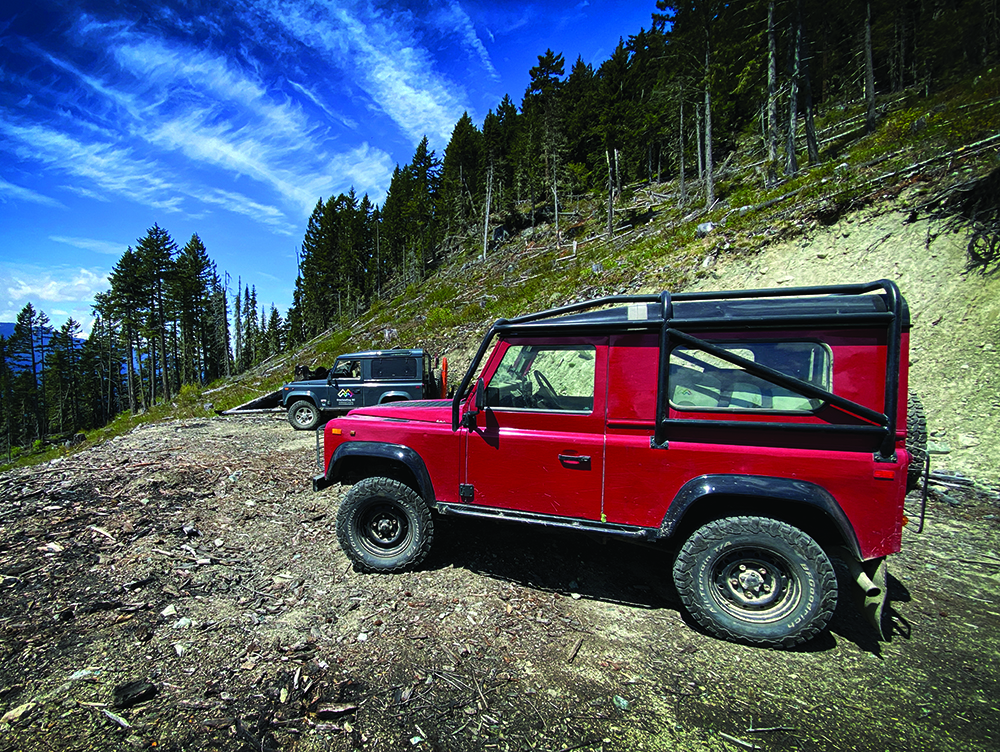 This is the Big Silver run of the river project up Canada’s Harrison East forest service road. It was the first time the truck was away from home without backup. It performed flawlessly. (Photo: Tina Rahn)

McKay’s lifted Xterra showcased a beefy front bumper with a WARN winch and rock sliders for side body protection. He wired the interior to power the ARB fridge, communications and auxiliary lights.

From Moab to Whistler, McKay and Rahn toured together in the 4×4, until she eventually called Ourea her own. 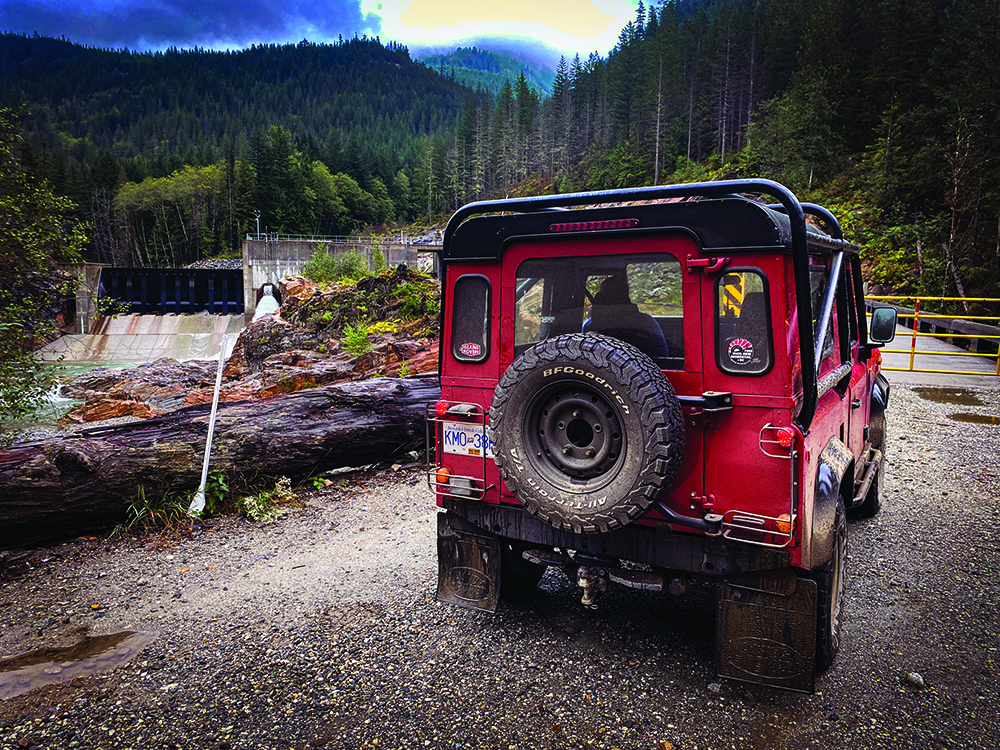 A pair of Defenders are on an adventure in Lillooet, B.C. In the background is Chris Walker’s 1996 Defender 90 (from Overland Training Canada).

“During the winter of 2018, I came to a realization that my wife had stolen my truck from me,” McKay said. “If I wanted to go on my own adventures, I would need to buy one of my own.”

The couple discussed various vehicles for their next overlanding rig. McKay wanted to stray from the typical Jeep or Toyota build, because he sought something unique.

Whitney, who piloted the aforementioned Discovery, had ordered a Defender 130 from the United Kingdom a few years earlier. He offered McKay the chance to drive it … and the rest was history. McKay decided then and there: he wanted a right-hand-drive diesel Land Rover. 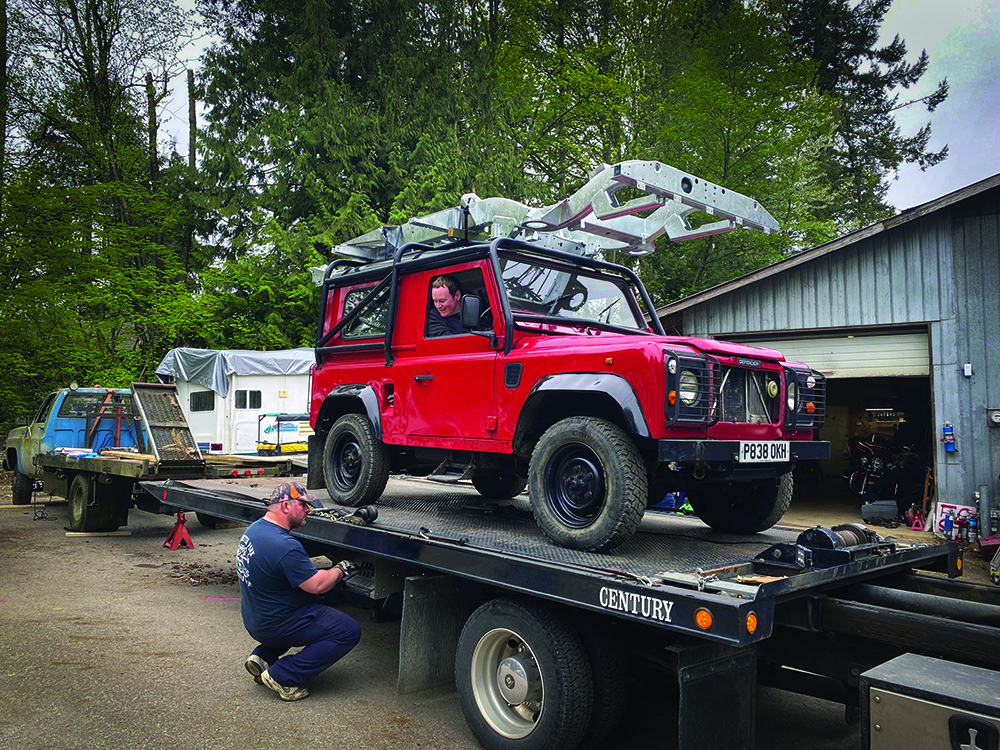 This is how the D90 truck rolled out of the container. (Doesn’t everyone carry a spare chassis on their vehicle’s roof?)

McKay, who is employed as a peace officer for the Federal Law Enforcement Agency of Canada, researched how to purchase a Land Rover from the U.K. When he learned that “Spencer [Whitney] had a trip planned to go to England,” McKay asked him if, while he was there, he could keep his eyes open for a truck for McKay.

The duo pre-planned which Land Rovers Whitney should look at, as well as what condition and price McKay could afford.

Every truck Whitney looked at was “good in the pictures; not good in real life.”

“It had a galvanized chassis and recent work to fix a multitude of problems. It needed more work, but the game-changing issues I’d been seeing weren’t there,” McKay said. The truck will eventually tow McKay’s little off-road trailer and tent. It’s better to keep the trailer and weight behind the truck instead of up high.

With a short negotiation and a thorough inspection by someone he trusted, “Spencer [Whitney] dropped the 500 British pounds I’d sent him with, and I went to the bank to wire transfer the rest.”

From there, they drove the D90 to a chassis-building company called KD Land Rover, located in Stockport. KD assisted McKay and Whitney in “stuffing the truck, two pallets of wheels, two frames, one Honda motorcycle and a miscellaneous box of parts from Britpart and Mud-UK into the container.”

Together, the two prepped the red Land Rover D90 for the long journey from Southampton to Montreal, Canada, by boat, and then Montreal to Surrey by train.

Why a Land Rover Defender 90?

McKay’s intention was to purchase an imported D110, put a sleeping platform in and use it as a base camp, “but when you’re on a limited budget, beggars can’t be choosers.”

However, when Whitney discovered the red D90, it fell into McKay’s lap. “I had to change some plans, but I’m very much appreciating the truck’s ability to get into places not all trucks can get into.”

This is how “Iggy,” the red Land Rover D90, came to be. “It’s ‘Iggy’ when he’s misbehaving,” McKay said with a smile, “and ‘Ignatius’ when he’s being all prim and proper.”

Over the last 16 months, McKay’s diesel-equipped Land Rover has been lovingly restored and built up to explore remote areas. Taking a truck camping is a challenge, especially one with only 89 inches of wheelbase. The ARB 37QT fridge helps save space. Removable aluminum airline boxes are ideal for storage and sorting stuff when you get to camp.

“It’s a machine that can get into places larger rigs might not be able to,” he said. This includes various old Canadian fire lookout towers to which the roads aren’t smooth—or even there. According to McKay, Land Rover Defenders are a few inches narrower than the average Jeep or Toyota. In addition, the 89-inch wheelbase means it’s nimbler in tight spots.

This is how ‘Iggy,’ the red Land Rover D90 came to be. ‘It’s “Iggy” when he’s misbehaving,’ McKay said with a smile, ‘and “Ignatius” when he’s being all prim and proper.’ A right-hand-drive Defender might seem glamorous, but it’s the most basic vehicle you can own.

This vehicle sold for $32,000 Canadian (approximately $25,400 U.S.). Brigade Overland and Overland Training Canada (formally Overlanding BC), Land Rover Direct and Land Rover Workshop all had a hand in making this build possible. Friends and family, along with McKay’s wife, Rahn, gave their time and expertise to give this well-used Land Rover D90 an improved life.

“Almost nothing can be sourced locally, so everything needs to come from England, with the exception of parts shared with the Discovery and NAS Defenders produced for the North American market,” McKay explained. “I appreciate that I can order individual parts, but I hate that almost nothing comes in a kit.”

The engine, mated to a new turbo, was in good working condition when McKay received Iggy. Despite this, McKay completed a lot of maintenance on the D90. For instance, the 300Tdi engine got a lot of love by having the EGR removed, tappets switched out and almost all the gaskets replaced.

“When I’m going to renovate or rebuild a specific piece, I come up with every part I can think of that might fail, be stuck or need replacing before I begin, because I hate waiting a week for parts,” McKay explained.

With this in mind, McKay thoroughly inspected and cleaned the diffs, and checked the tolerances. He also replaced the vehicle’s differential seals. McKay and Whitney rebuilt the LT230 transfer case and replaced the center differential cross pin with a stronger version. They refreshed bearings and the main shaft, adding a reinforcing bushing to prevent future leaks—a common occurrence on these transfer cases. Additionally, they added on new input and output flanges and new transmission brake shoes. 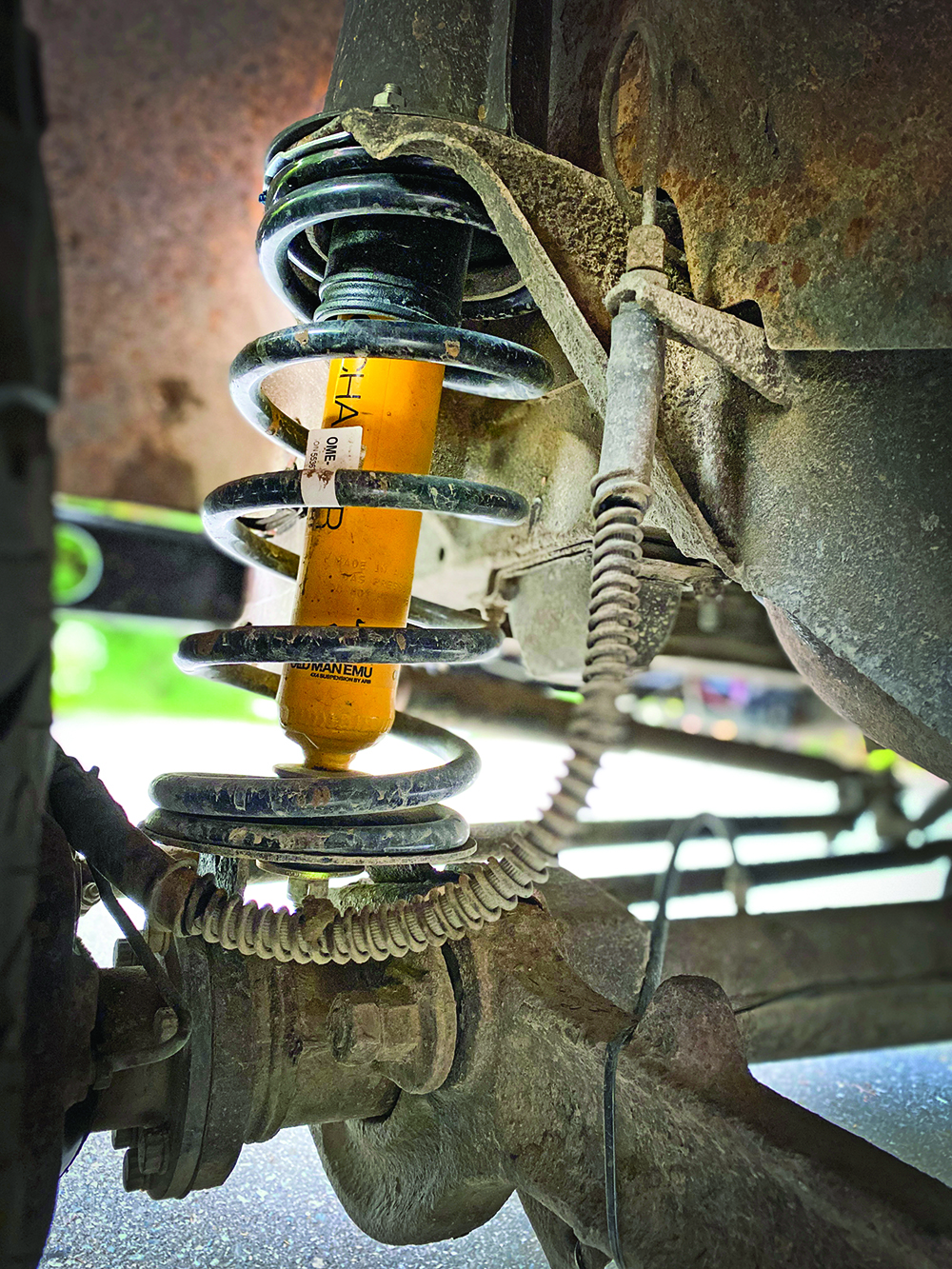 Old Man Emu HD shocks and springs were massive upgrades to the Britpart pieces on the truck. The OME kit lowered the truck but increased the ability for the suspension to droop when needed. They’re massively comfortable on the road during long drives.

Tires and wheels also got an upgrade: McKay mounted BFGoodrich KO2 245/75R16 all-terrain tires to Britpart Wolf Style 16×6.5-inch black steel wheels. (Tip: Although heavier, steel wheels—or “steelies”—are durable and easy to touch up. They can also be repaired in the field should damage occur.) 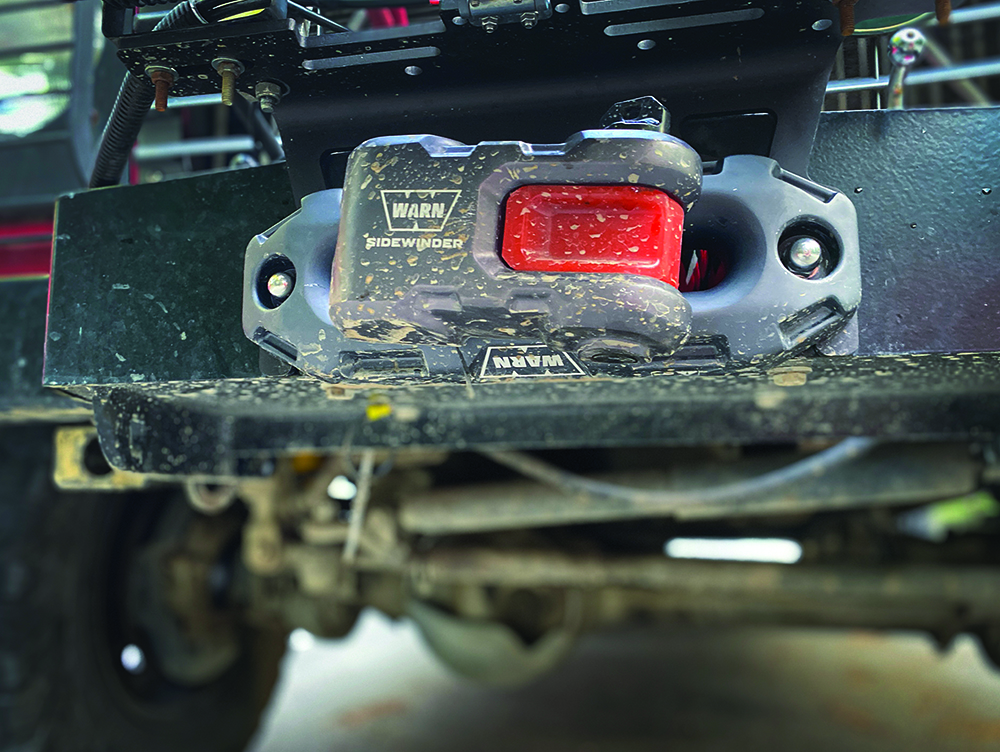 A WARN Epic fairlead and Sidewinder are perfect companions. McKay didn’t know how good they were until he used them. 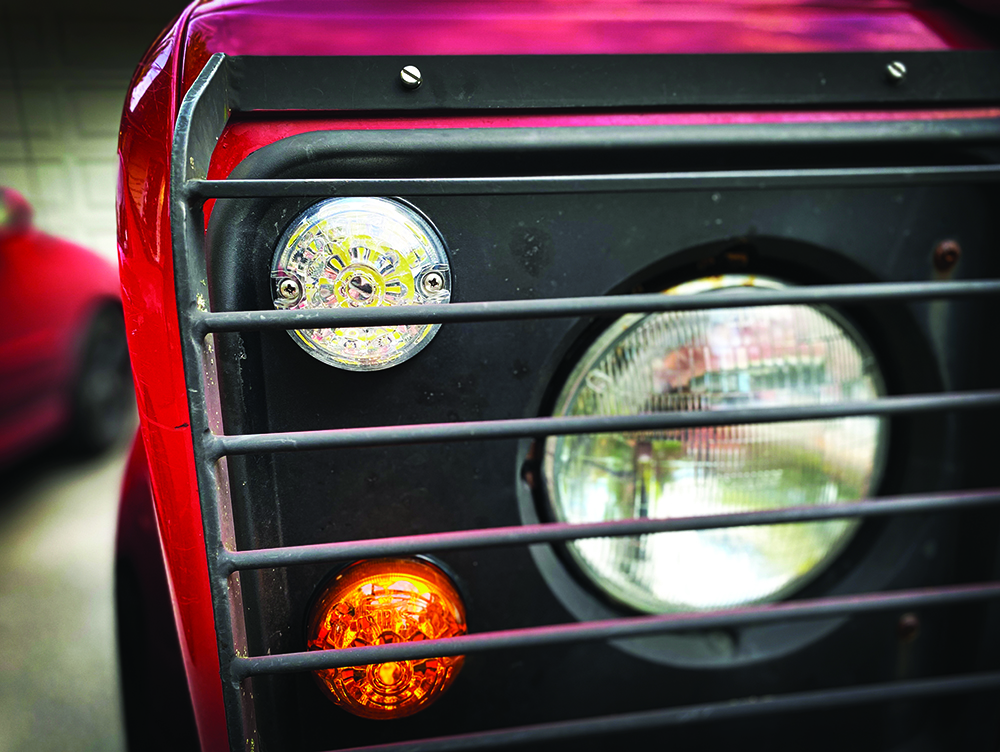 If you own a Defender and you haven’t replaced your signals with WIPAC LEDs, stop what you’re doing and buy them right now. It’s by far the best upgrade the D90 has received. 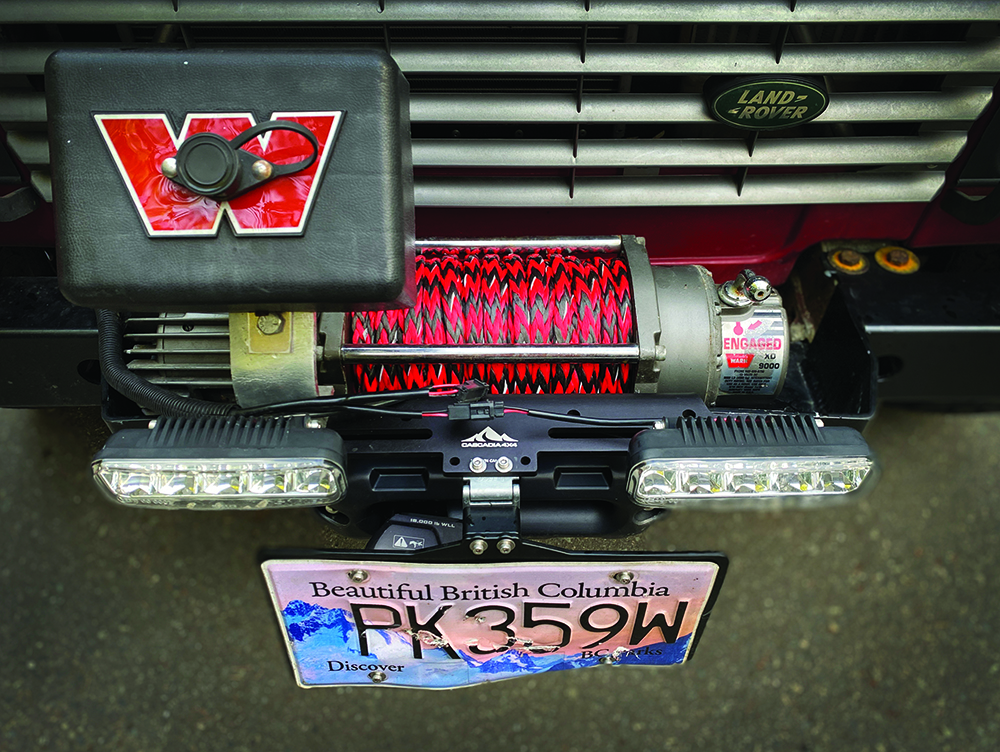 A Cascadian 4×4 flipster license plate holder and LED mount allows a WARN winch to hide behind it when it’s not in use. A WARN xd9000i is paired with a Spydura Nightline reflective winch line—waiting to be called into action.

One of McKay’s biggest triumphs was when the D90 moved under its own power for the first time after he rebuilt the axles and brakes.

“This truck makes you work hard for every, single win, so every broken bolt or rusted-out component fights you until the bitter end,” he explained. “It seems like a massive win when you compare it to the struggle it took to get it there.”

‘This truck makes you work hard for every, single win, so every broken bolt or rusted-out component fights you until the bitter end,’ [McKay] explained. ‘It seems like a massive win when you compare it to the struggle it took to get it there.’ McKay discovered a beautiful side road during a recent camping trip. Sometimes, the right turn leads you to amazing places.

The first time McKay piloted Iggy off-road, the truck “just climbed over the obstacles without ever losing grip,” he said. “I like driving standard. It gives you more connection to the trail and the challenge of having to think ahead about gear changes.” 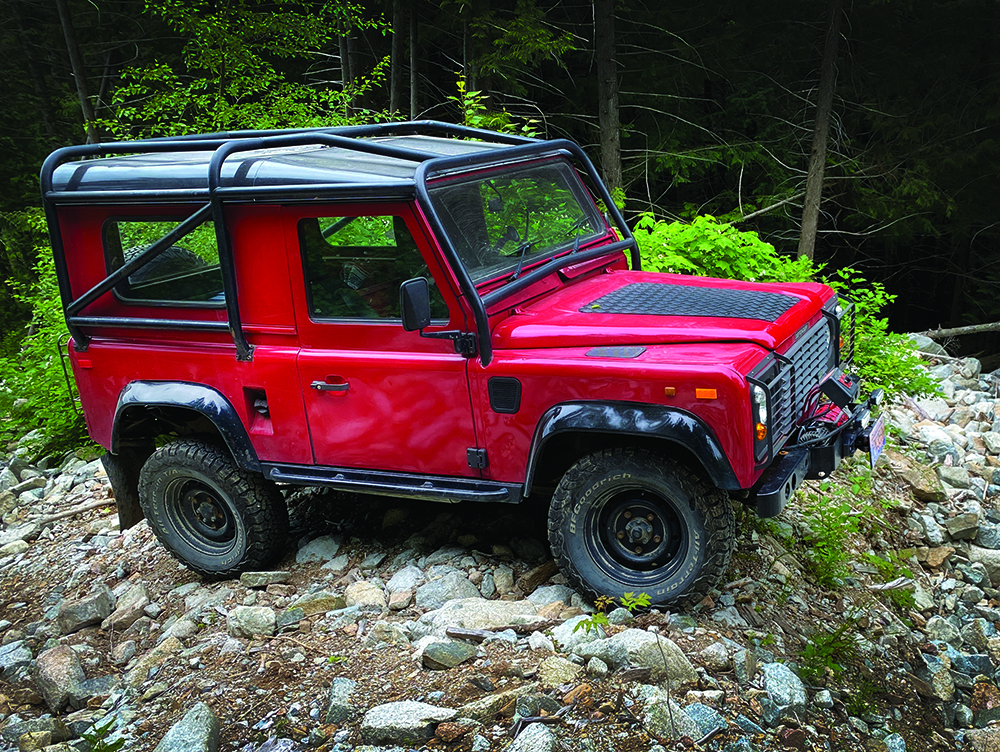 Had McKay pushed farther over the trail, he would’ve been nose deep in a 10-foot-deep creek bed on the Trail 6 Feet Under via the Norrish Creek forest service road. Sometimes, it pays to walk the trail ahead of an obstacle.

The D90 helped him gain confidence in its capability and where its limits are.

Since then, McKay’s taken the D90 on various trips that total more than 250 miles—and it hasn’t missed a beat. McKay poses with the D90 after the truck first touched Canadian soil; it took two tow trucks and four hours to move the truck from the container. (Photo: Maisie Lucas)

“We went up Kookipi Pass and Nahatlatch lookout. It’s also been up Harrison West and in and around Lytton and Lillooet Lake.”

To McKay, Iggy, his newly imported, right-hand-drive diesel Land Rover D90, has now proven its worth and earned a place among his four-wheeled 4x4s. Driving the D90 truck puts a smile this size on McKay’s face every time.