→ Submit your rig and win a Tread magazine feature of your truck! ←
Get the Magazine
Features, Overlanding, SUVs, Trails & Tales, Vans & Campers
Story and Photos by Mercedes Lilienthal 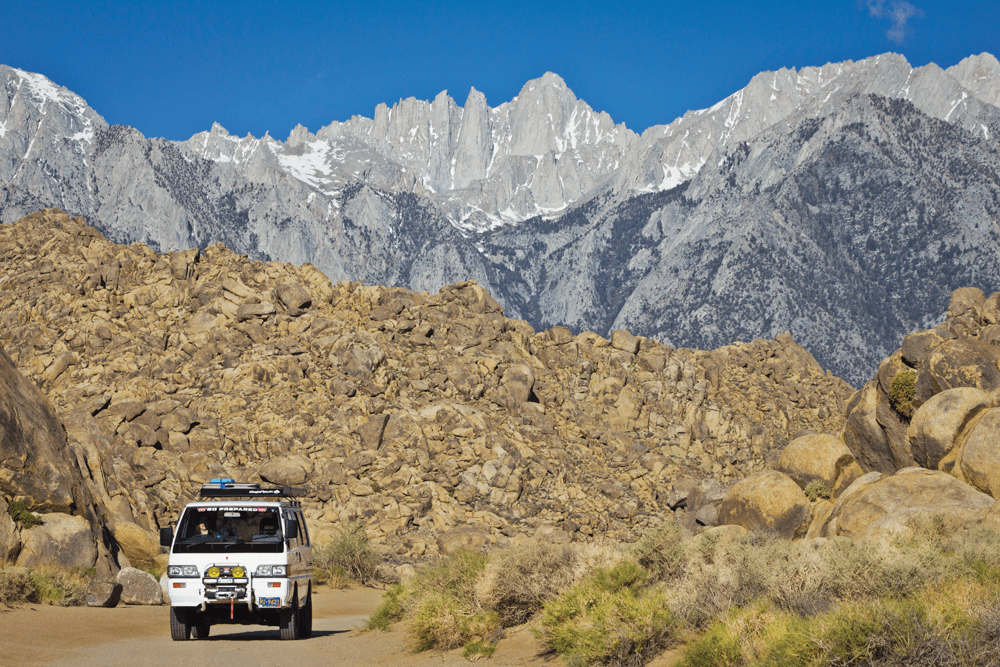 Wanderlust has taken a stronghold; its grip strengthens as each day passes. From wintertime doldrums to COVID-19 and beyond, we’re ready to get out. We’re excited to explore new territory, especially remote areas that boast a variety of terrain and off-roading challenges. Sand, dirt, rock, and more; if you’re craving out-of-the-way areas showcasing a plethora of stunning landscapes you’re in luck, U.S. highway 395 provides those opportunities. 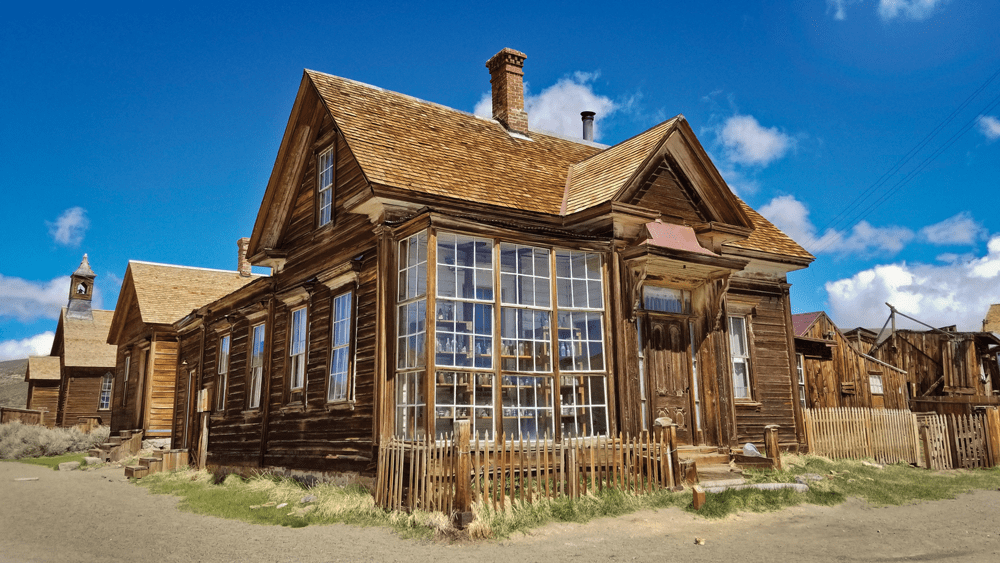 Designated a National Historic and State Historic Park, visitors can reach Bodie via 395 to Highway 270 (mostly paved) or nearby off-road tracks linking to the town from the opposite direction.

U.S. Highway 395, particularly in California, has a lot to offer. From Death Valley’s vast remoteness to Alabama Hills and its rugged rocks and rounded boulders, a multitude of off-roading trails and overnight adventures are waiting to be had. Hidden gems and bizarre oddities await visitors. Hundreds of miles of off-pavement tracks, crevices stuffed with old women’s shoes, and even an old-time ghost town—California’s 395 is where it’s at.

Stretching 1,305 miles, US 395 spans from California’s Mojave Desert at Interstate 15 near Hesperia and works its way up to the Canada/U.S. border near Laurier, Washington. Highway 395 travels the entire West Coast through four states: California, Nevada, Oregon, and Washington.

The California section of 395 gives access to several places worth visiting, including Alabama Hills, Death Valley, and the carefully preserved ghost town of Bodie.

During the late 19th century, Bodie boasted a population of nearly 7,000 people and approximately 2,000 buildings. Businesses flourished as the search for gold became profitable. Banks, churches, saloons, and even a local newspaper and school lined the streets. Bodie was booming. 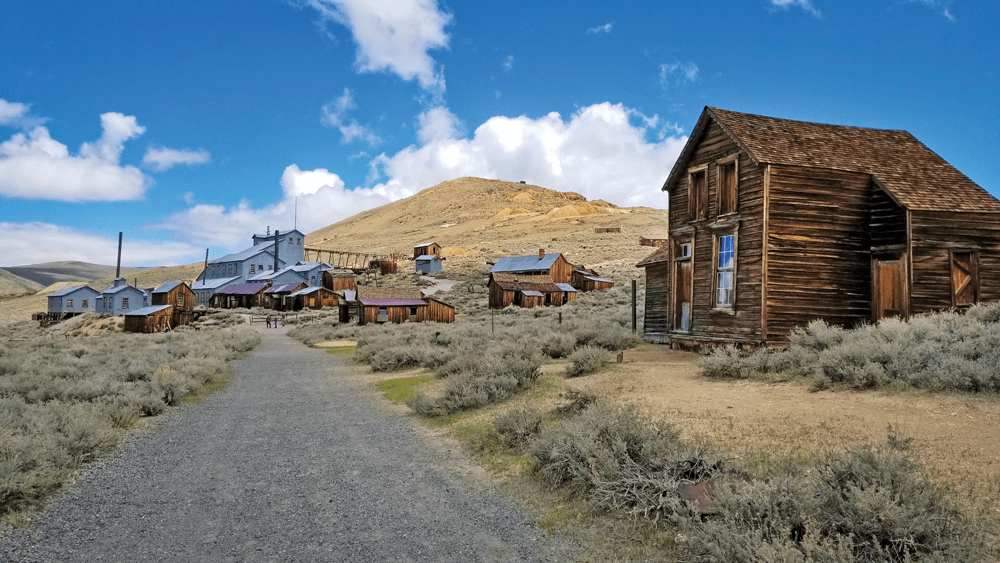 Bodie once boasted a population of nearly 7,000 people and approximately 2,000 buildings—a wonderland of wandering opportunities. What’s left isn’t much, but is carefully preserved for visitors.

However, a few years later, Bodie started to decline as other get-rich-quick communities popped up. A gold rush settlement morphed into a mining town that dug for ore. Bodie kept going as a railroad connected the town to essential materials and equipment. A hydroelectric plant was also built—which was one of the first carriers of electricity to areas that needed it.

As other mining towns lured residents away, the population drastically declined. The 1880 census indicated the population was more than halved at 2,712. Ten years later it halved again. By 1930 only 228 people called Bodie home, and by the time 1950 rolled around, the town stood empty. Mines closed shop and the town lost its existence.

Luckily, Bodie survived as a preserved ghost town. It was designated a National Historic Landmark in 1961 and a State Historic Park in 1962. Visitors can visit Bodie via 395 (which is mostly paved) or off-road tracks linking to the town from the opposite direction. Note: Some trails may be rough or impassible; research ahead of time to ensure the path you’d like to take will get you there. 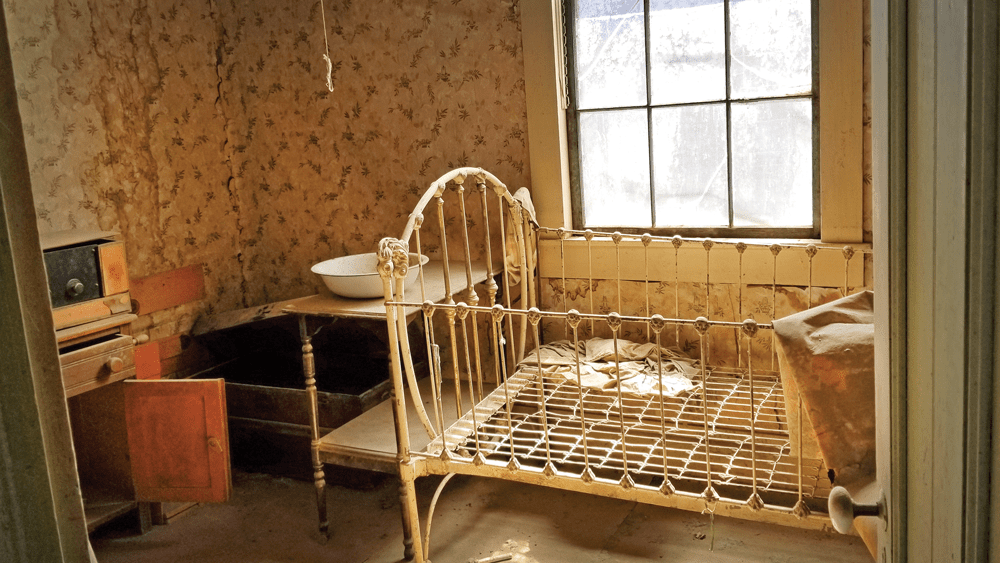 Over 100 buildings still stand. Visitors can peer through each building’s windows but aren’t allowed to go in.

Approximately 110 buildings still stand, with interior accoutrements like bed sheets, dishes, and books still intact. Visitors can stroll through the streets and peer through each building’s cloudy windows but aren’t allowed to go in. Scads of rusty truck parts and broken china can be found throughout the grounds—inviting onlookers the chance to imagine life as it once was.

Today, the Bodie Foundation carefully looks over the park. They ensure structures are safe, fire extinguishers are charged (they were switching them out when we visited), and the overall grounds is safe to visit. They’re continuing to keep Bodie recognized as the boom town it was in its past, but also a preserved ghost town for its future.

You may have seen Alabama Hills without knowing it. Alabama Hills, famous for its orange- and peach-colored bulbous boulders, is a popular film location for a variety of shows—especially old westerns. Rounded rocks of all sizes adorn the landscape and twisting trails curve each corner. Stout pillars of grandeur starkly contrast the sharp edges of the mighty Sierra Nevada mountain range behind it. 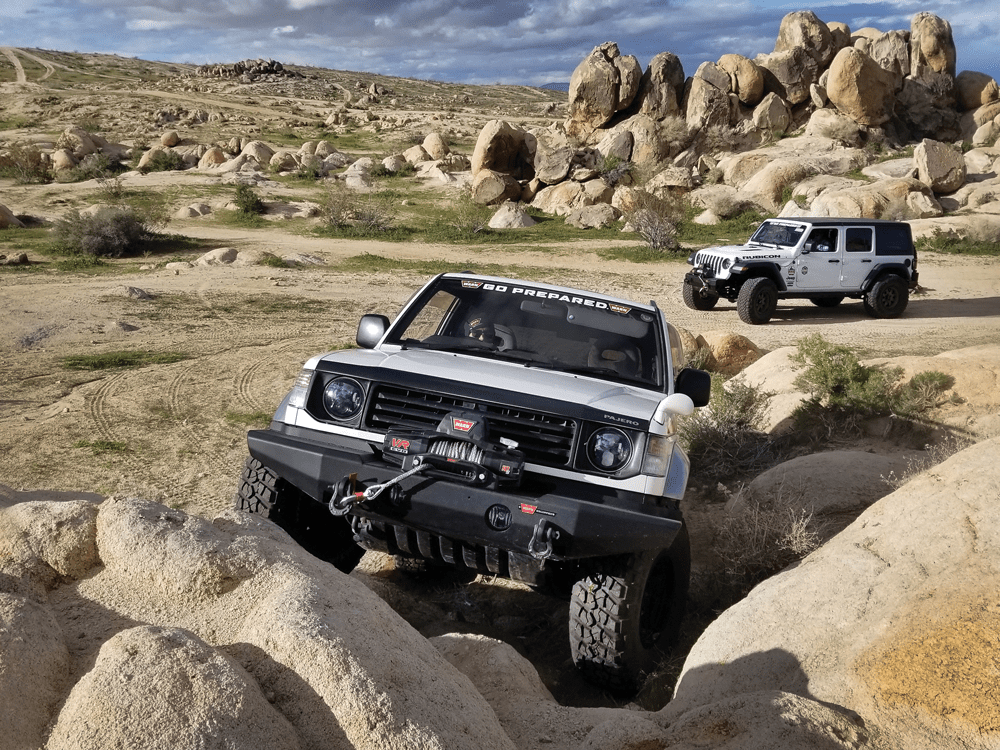 Located just west of Lone Pine, California, Alabama Hills quickly seduces you into wonder. Each angle is vastly different from the first; each rock formation massive. Managed by the Bureau of Land Management (BLM), this area was recently designated as a national scenic area. Winding dirt trails guide visitors around its landscape. An abundance of primitive camp spots can be found, with rougher 4×4 trails noted as such.

Once there, visitors can set up their home base and hike, bike, or venture around. Numerous rock arches adorn the landscape and hidden pockets of jaw-dropping viewpoints are everywhere. It’s a place to camp, relax, and contemplate life.

Located approximately an hour away from Alabama Hills and Highway 395 is one of the gateways to Death Valley, a tiny town called Panamint Springs. Not much more than several buildings and an obscenely expensive fuel stop, it’s one of the most popular entrances into the heart of Death Valley. Pro tip: Purchase your food, drinks, and extra fuel before you get to Death Valley, as prices can triple once within the park.

“From old mining towns to boulders the size of your house, each region is vastly different from each other, yet completely inviting.” 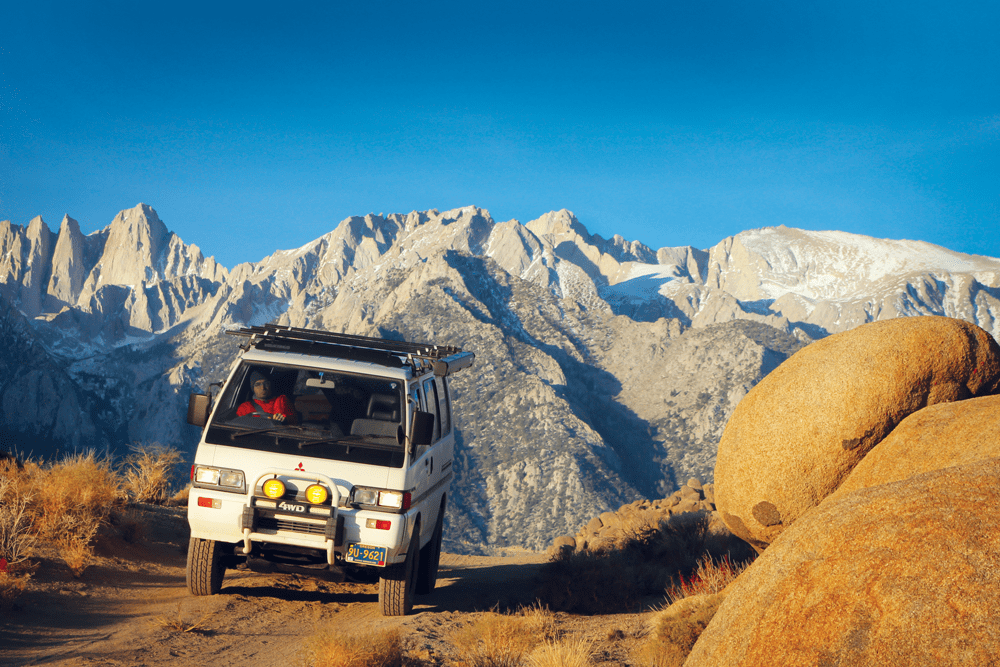 An abundance of primitive camp spots can be found at Alabama Hills, rougher 4×4 trails to get to them are noted as such. The author’s ’89 Mitsubishi Delica Star Wagon was at home traversing dirt to get to them.

Badwater Basin, sitting 282 feet below sea level, is the lowest point in North America. Not too far away lies Dante’s View, a unique vantage point where on clear days, both the lowest and highest points in the Lower 48 can be viewed: Badwater Basin (lowest) and Mount Whitney (highest, part of the Sierra Nevada range). 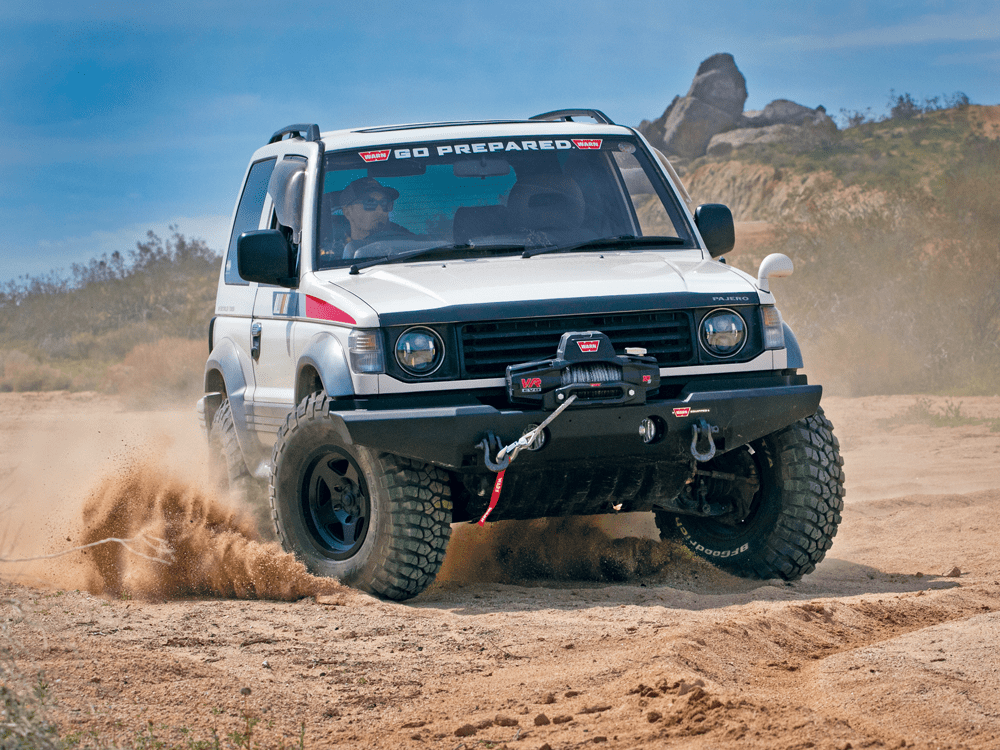 In addition to rocks and dirt, Spangler Hills boasts dried river beds to play in.

Death Valley can be seen via paved roads and off-tarmac trails. Pack extra food, fuel, water, clothing—and patience. Bring a first aid kit, recovery supplies, and spare parts, too. Most importantly, have a way to communicate with the outside world. Breaking down in the middle of Death Valley can mean the difference of life and death if folks can’t locate you should an emergency arise. Talk to your forest service rangers before you go; they know road and weather conditions best and can tell you where you can and cannot primitive camp.

Although difficult washboarded roads and dozens of slow-going miles separate the Racetrack Playa from visitors, it’s worth checking out.

Our favorite Death Valley areas to access via off-tarmac trails were Racetrack Playa and Lippincott Pass Road. Racetrack Valley Road, a 26-mile stretch of unimproved gravel and washboarded road to the Racetrack Playa, invites flat tires and fatigued bodies. Be prepared! Airing down your tires before visiting the Playa will help save your ride and greatly increase occupant comfort. Pack in, pack out, and tread lightly. 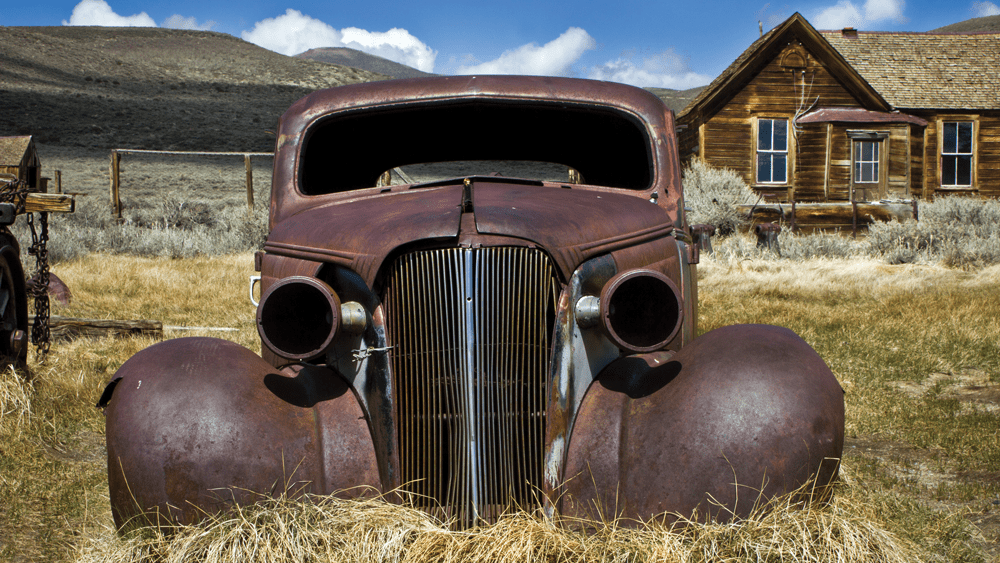 A plethora of rusty mining and truck parts litter Bodie’s grounds. They speak to the town’s heritage and a bygone era.

Lippincott Pass Road, a gnarly 4×4 trail that lets drivers know to “enter at their own risk,” is approximately 8 miles long. It’s a narrow, rocky, and steep descent from Racetrack Valley Road down to the valley floor, known as Saline Valley. This stretch will take you much longer than you think and no tow services are available for this remote stretch should you break down. Lippincott’s tight quarters and ever-changing terrain will make you wish for solid ground after you finish. Death Valley road conditions and weather can change on a dime, it’s best to contact forest service rangers before attempting any off-road travel in the park.

To Sum It Up

California’s Highway 395 and its surrounding areas offer a multitude of off-pavement activities and opportunities to explore. From old mining towns to boulders the size of your house, each region is vastly different from each other, yet completely inviting. It’s worth carefully planning your trip, however, as popular attractions and remote destinations can be in the middle of nowhere and difficult to get to. Getting outside assistance could be tricky. But, by packing the right supplies and gear, talking to local rangers before you head out, and letting family or friends know where you’re adventuring to, an excursion to these areas is exciting and memorable.

“Stout pillars of grandeur starkly contrast the sharp edges of the mighty Sierra Nevada mountain range behind it.” 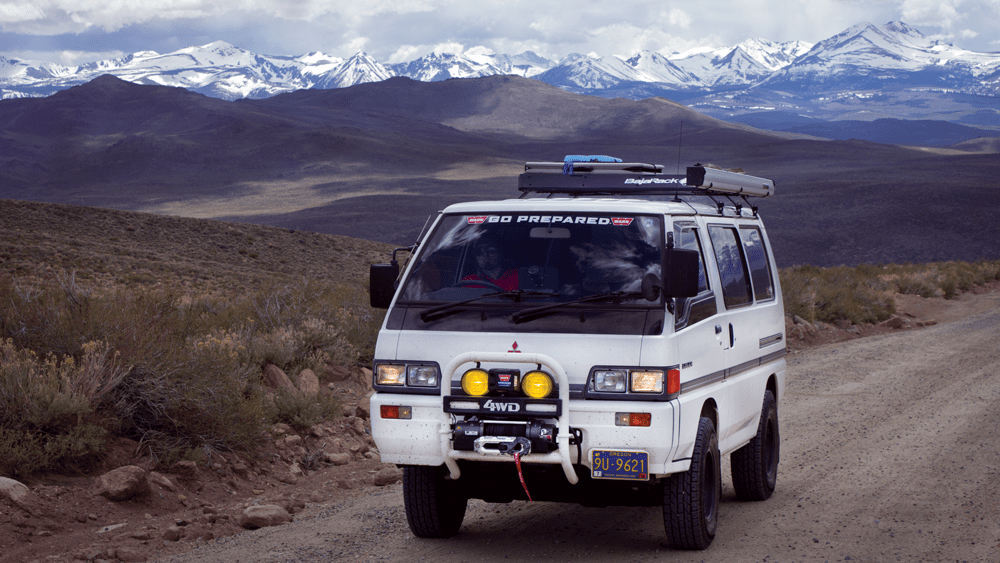