Get the Magazine
Fishing, How-To's
Text & Images by RANDY HYNES 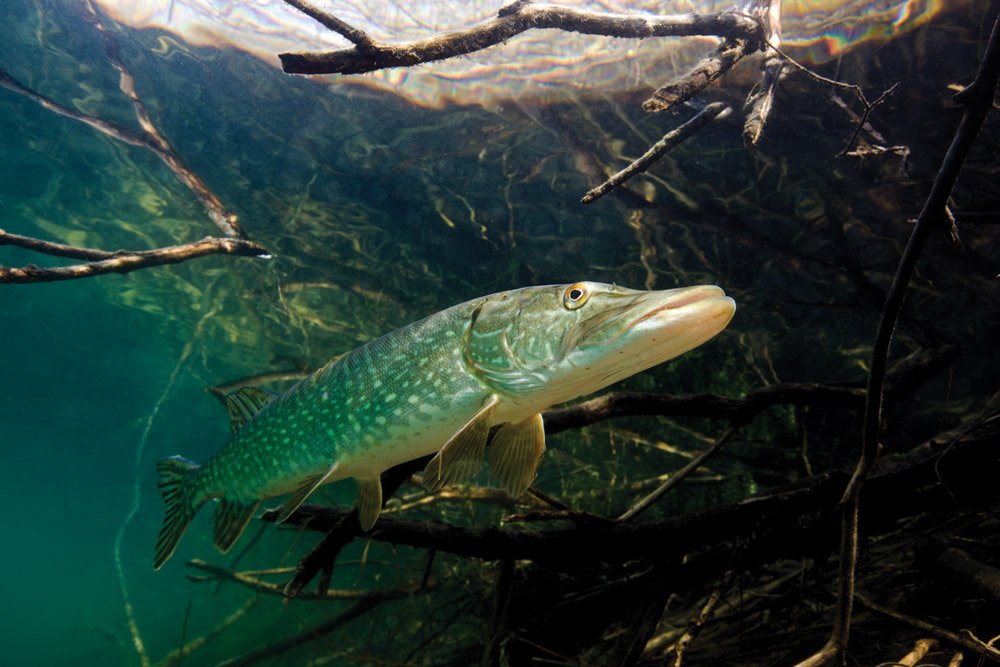 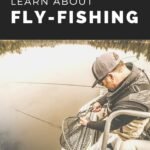 If You’re Looking for an Ill-Intentioned Fish With a Reputation for Delivering Dynamic Eats, Give Fly-Fishing for Northern Pike a Try

Gone are the days when fly-fishing was limited to pursuing delicate trout with flimsy rods and small flies. Modern fly gear has made it possible for anglers to chase a myriad of freshwater and saltwater species of fish. Whether sharks, tarpon, giant trevally or muskie, the list of sport fish that can be caught on a fly includes almost anything that swims.

One of the species growing in popularity among fly anglers is the northern pike. Known for its predatory instincts, penchant for large flies, and savage eats, this toothy fish can be found across North America, Europe, and Russia. From Saskatchewan to Sweden, pike have created a global sensation for fly-fishers looking for vicious action on the fly. 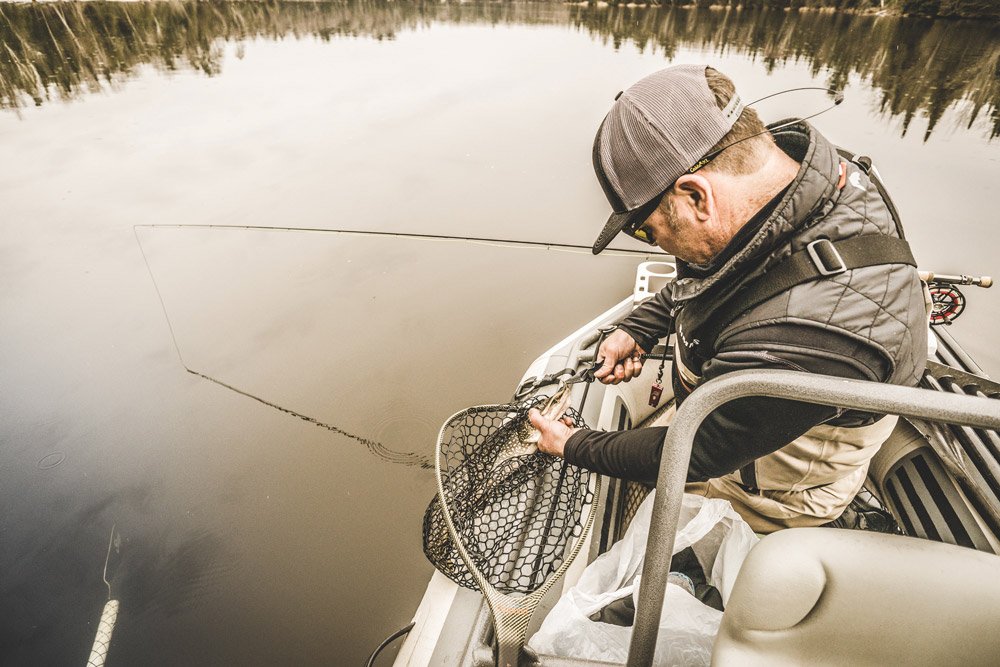 Spring and fall are typically when big pike are most vulnerable to the fly angler. These ill-mannered eaters can be found around likely ambush spots, such as drop-offs, ledges, sunken timber, and weed edges.

With a face only a mother could love, northern pike resemble a mutant alligator—part gator, part fish. A wide, flat head and yellow eyes give them an intimidating appearance, while strong jaws, big teeth, and a lean body allow pike to be the ultimate predator. These fish are known for lying in wait and granting a death wish to a host of unsuspecting prey. A pike’s menu may consist of frogs, snakes, ducks, mice, muskrats, and fish, such as perch, walleye, bluegill, and even other pike. 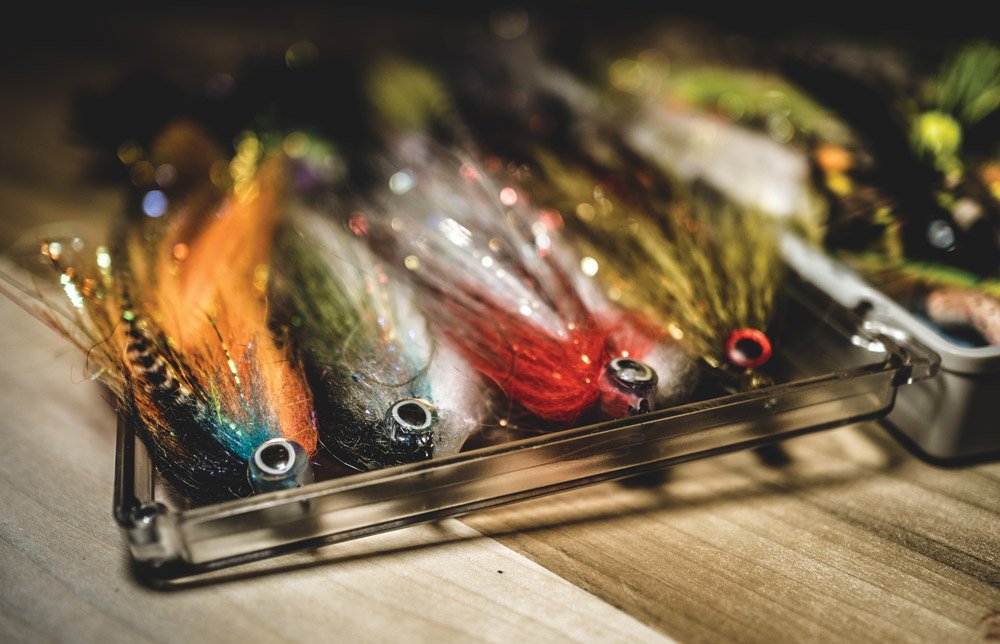 Unlike trout fishing, you won’t need multiple fly boxes full of various types of flies. A handful of confidence flies are enough to get you started on the quest for hungry pike.

Though stalking fish this size requires a departure from traditional fly gear, it’s good to know that whether you’re targeting hammer handles in the Midwest or 20-pounders in Manitoba, the gear and the methods remain essentially the same.

Choosing a Rod and Reel

One look at a northern pike and it’s easy to see it’s no trout. They are lean, green, fly-eating machines built for ambushing baitfish. As a result, a stout, fast-action fly rod suited for chucking large streamers is a must. An ideal pike rod generally ranges from a 7-weight to a 9-weight. Depending on the size of pike found in your local waters, a 7-weight might be more suitable. If fishing for pike measuring in the 40-inch range, an 8- or 9-weight would be preferred. 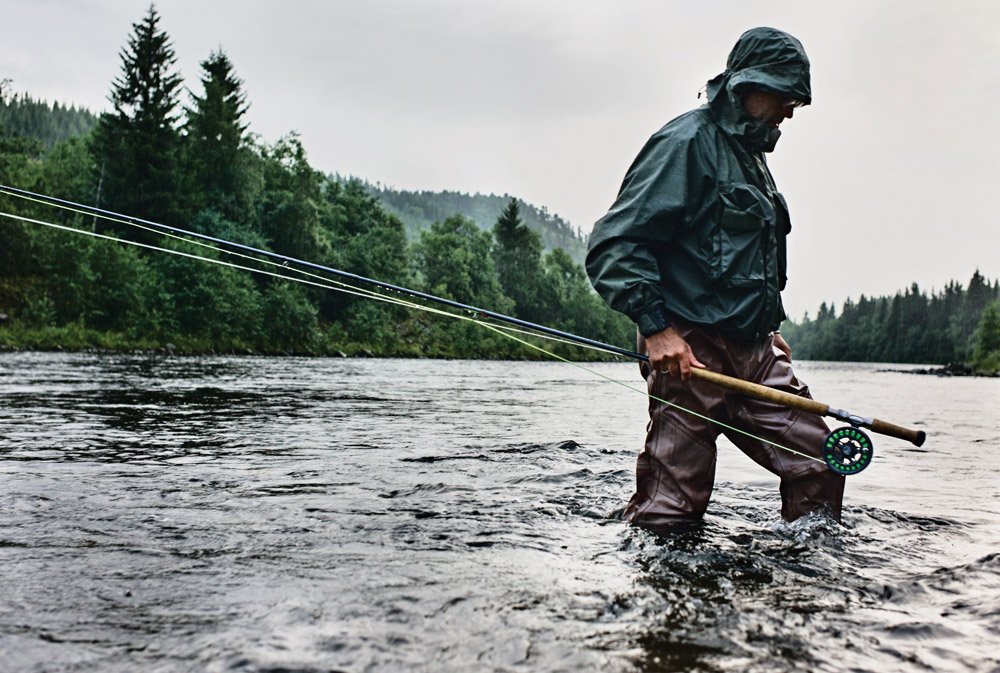 The size of the fly is a determining factor when choosing a rod. Since most pike flies average between 6 to 8 inches in length an 8-weight rod can handle them without issue.

The size of the fly is also a determining factor when choosing a rod. Large, wind-resistant flies require a fly line that will load the rod properly, turn over the fly, and deliver the fly to its intended target. Since most pike flies average between 6 to 8 inches in length an 8-weight rod can handle them without issue. If you plan on throwing flies in the 10- to 12-inch range consider a 9-weight. Especially if wind is a factor you may want to choose a heavier-weight rod. My choice for an all-around pike rod is an 8-weight, which can also be used on large trout and bass.

When considering what fly reel to purchase remember northern pike are more like a bulldog than a bonefish, they’re happy to fight, but don’t often run. Any large-arbor reel capable of holding the proper weight fly line plus 100 yards of Dacron backing will be more than sufficient. As long as it holds line and is courageous enough to wrestle with a river wolf, it will bring a pike to the net.

The Perfect Line and Leader for Northern Pike

A quality fly rod and the best of flies won’t do much good without the proper line and leader. While it’s enchanting to watch a big fish eat a big fly, getting that fly to the fish shouldn’t be a challenge. Modern fly line technology has come a long way since horsehair and silk, today’s fly lines make it easier than ever to cast big flies. 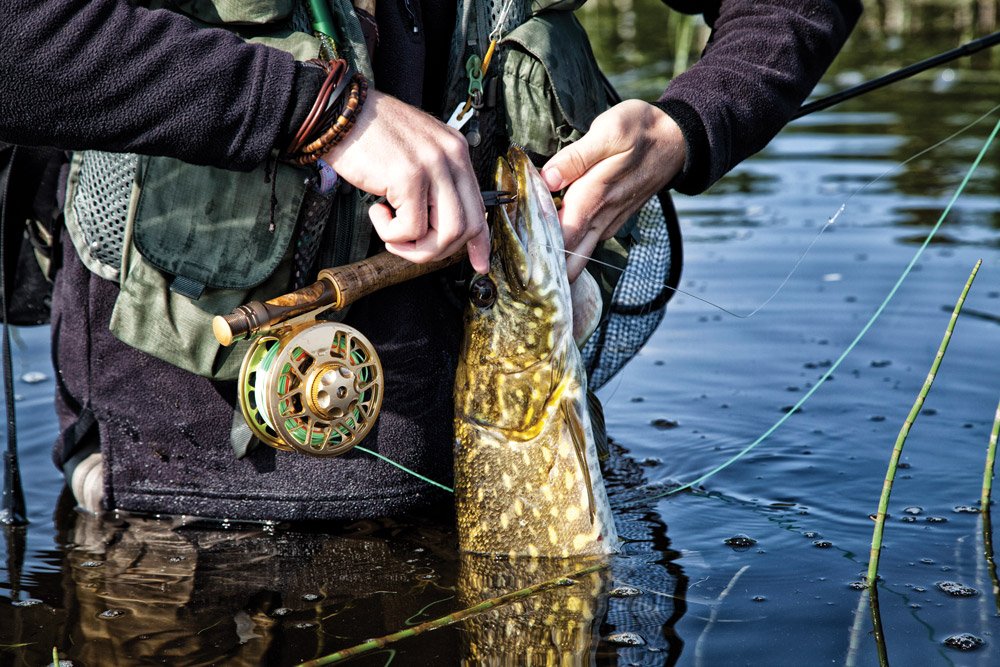 When choosing the proper fly line there are three types of line to consider: floating, intermediate, and sinking. Floating line is ideal when northern pike are in shallow water or in the mood to chase topwater tackle. Scientific Anglers has designed a floating line that is ideal for both applications in the form of their Titan taper. This line is available in the Mastery Series and features an aggressive, compact head (concentrates the weight in the front of the line) and short belly, ensuring a powerful but smooth turnover. Paired with the right rod, this style of taper will make it relatively easy to fling a fly that looks like it required half a chicken to tie.

Intermediate lines, on the other hand, offer an advantage when targeting fish in medium-deep water. They can also be used in deeper water when fish are suspended higher in the water column. Intermediate lines sink at slower rates than fast-sinking lines, yet allow for a natural presentation below the surface. When fished with a strip-pause retrieve, intermediate lines allow the fly to emulate a suspended baitfish just waiting to become dinner for an apex predator. As with their floating line, Scientific Anglers has also designed an intermediate line in their Sonar series that features a Titan taper. 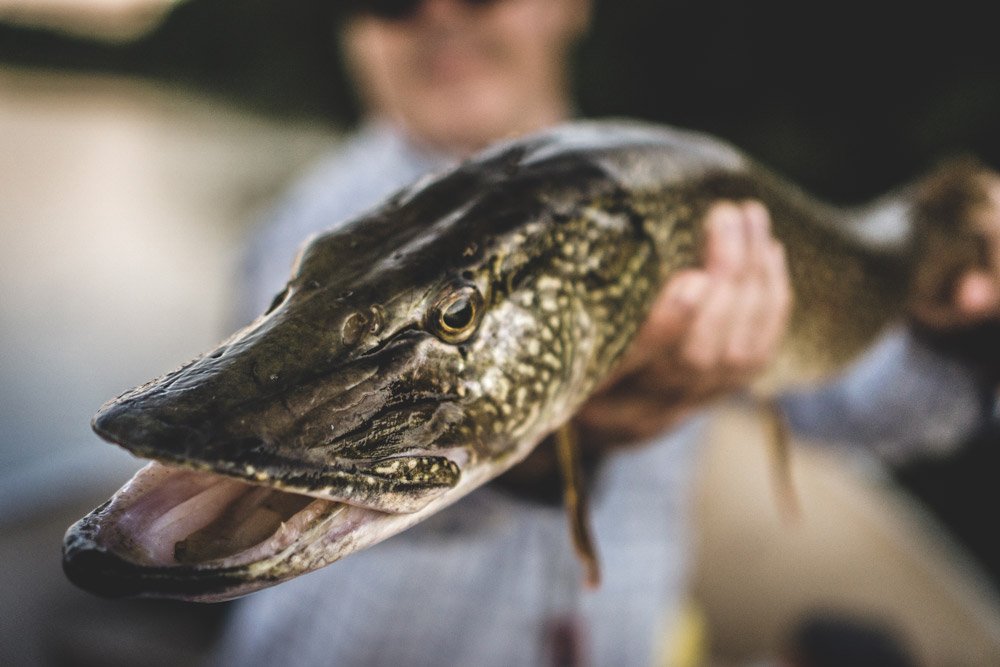 During the dog days of summer and pre-ice winter, fast sinking lines may be the only way to get down and dirty. When pike decide to hide in deeper water, sinking lines will get the fly in front of their ugly faces. Fast sinking lines allow natural presentation in deep water and a horizontal retrieve of the fly. Sinking lines are available in a selection of sink rates making it easy to choose a line best suited for the depth of water you’ll be fishing in.

When it comes to leaders, the sharp teeth of a pike make it imperative to use wire. While some fishers prefer to make their own, the fastest and easiest method is to buy a leader that’s pre-packaged and expressly designed for pike. The Scientific Anglers Esox Special Leader is a great choice and is well-capable of handling a member of the Esox family. With its nickel titanium wire section and snap closure you have insurance against a sharp tooth or gill shearing off your fly.

New northern pike enthusiasts may be excited to know that, unlike trout fishing, you won’t need multiple fly boxes full of various types of flies. While your inventory will undoubtedly grow over time, a handful of confidence flies are enough to get you started on the quest for hungry pike.

Pike flies are drastically different than a trout fly—think big, real big. Whereas a standard dry fly may use a size 14 to 16 hook, a pike fly may be tied on a size 2 through 4/0. Most pike flies are designed to either be an attractor pattern or imitate baitfish. I’m of the school that believes big flies attract big fish, a flashy 8-inch streamer may look more like a Christmas decoration than a fly, but often it’s these flies that provoke pike to charge through the shallows and deliver a violent strike. From topwater patterns designed to represent a mouse or frog, to streamers made from a plethora of feathers, pike flies vary in design. When choosing a fly never think to yourself, “A pike will never eat that.” Some of the most effective fly patterns fall into the category of big and ugly. Big eyes, gaudy material, and plenty of color isn’t a bad thing, pike are known to like flash and will target the eye of their prey when delivering a debilitating bite.

Patterns such as Andreas Anderson’s Deliveryman, Paul Beel’s Bearded Wonder, Matt Grajewski’s Yard Sale, Pat Cohen’s Manbearpig, or flies like the MEGA Jerk by custom tier Gunnar Brammer are sure to get your rod bent. There’s a host of great tiers and just as many pike flies that will catch fish. Having a selection of both topwater flies and streamers in different sizes and colors will give you an option if for some reason the pike decide to be stubborn—and it happens. If wondering what fly to use in a particular body of water, consider what is most likely going to resemble the size, silhouette, color, and action of the forage fish. If a fly looks like eatable prey a pike is very likely to eat it.

Presentation of the fly is just as important as choosing the right pattern. It is imperative to retrieve the fly with strike-inducing action. A jerk-strip–style retrieve that makes the fly act as if it’s trying to swim, while pausing like an injured bait fish, will often be the retrieve that gets the aggressive and merciless strike. Normally, pike are not difficult to catch, but there may be times when it’s necessary to coax a lazy fish into eating. If and when this happens, go deeper and slow down your retrieve.

Spring and fall are typically when big pike are most vulnerable to the fly angler. These ill-mannered eaters can be found around likely ambush spots, such as drop-offs, ledges, sunken timber, and weed edges. After warmer weather arrives and water temperatures climb significantly, pike can be found lounging in deeper sections of lakes or rivers seeking cooler water. To find these predators, become one. Hunt for their hideouts and fish them intentionally. If the first cast doesn’t result in an eat, cast again and change the speed of your retrieve. These fish are not difficult to catch, but they may require some patience.

If you want to see an ill-intentioned fish eat with no table manners, try fly-fishing for pike. This is one species that doesn’t require delicate presentations or classy casts, but the rewards are both visual and dynamic, reasons that keep pike fishers searching for the next big eat. Just one bite and you’ll find there are few freshwater fishing experiences more gratifying than catching a pike on the fly.