→ Submit your rig and win a Tread magazine feature of your truck! ←
Get the Magazine
Features, Fishing
Text and Images by Randy Hynes 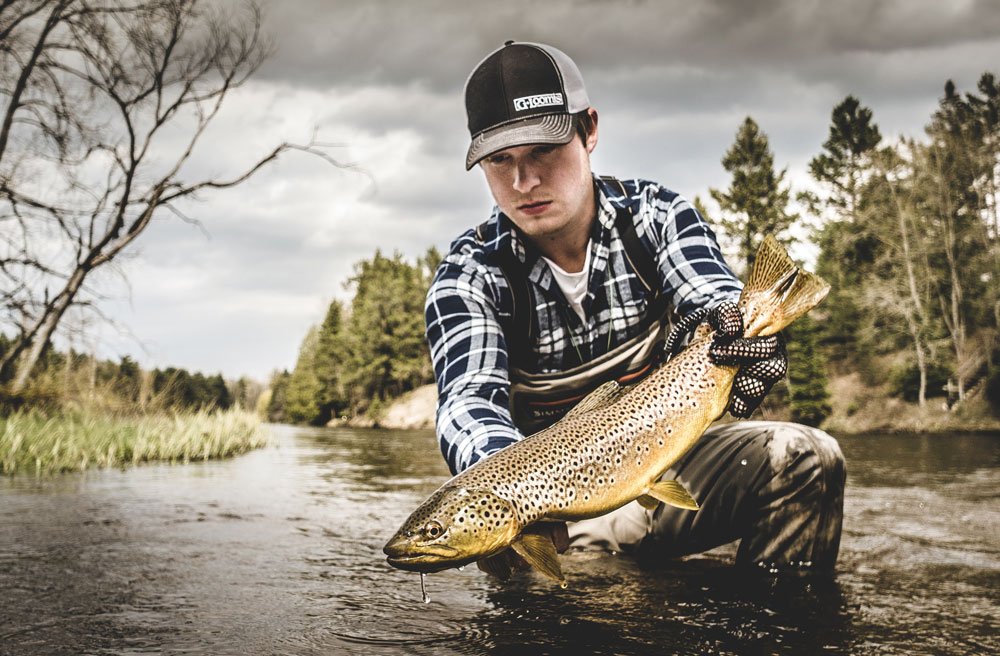 The Ghost With a Blue Halo

She preferred a remote dwelling. Off the beaten path where large, hardwood logs randomly tucked themselves along an undercut bank in the river. Crudely built by the high water of spring, her hovel was humble but sturdy. This was her fortress. In the shadow of these naked logs she’d hole up for days. A recluse, withdrawn from others like her.

Maybe it was her European descendants that were to blame for the shyness; whatever the reason, she had a reputation for being ghost-like—refusing to leave her riverside home until after sundown. As one might expect, this type of demeanor birthed a myriad of rumors.

Her reputation became tainted, stained by those who assumed truth without fact. Some thought her to be foxy; deliberately playing those who pursued her. Others claimed she was genuinely flirtatious but extremely coy. Unfortunately, the majority of these narratives reduced her to fictitious, nothing more than local folklore of Paul Bunyan proportions.

Those who believed in her were different. You could always tell who supported her by the way their story would unfold; the truth was found in what they wouldn’t say. Most noticeably they didn’t laugh when others mocked. These few knew something the majority didn’t; there was a common thread in their recollections.

Those who claimed to have courted her spoke distinctly of three things: her physical appearance, her preference to dance after dark, and that she was deviant. And without exception the “few” claimed she’d rudely snub the finest meals and most delicate presentations. Their mix of emotions made it clear, although ardent, she’d left a number of suitors standing waist deep in a cocktail of frustration wondering if the encounter was real or did she belong among the cryptids? 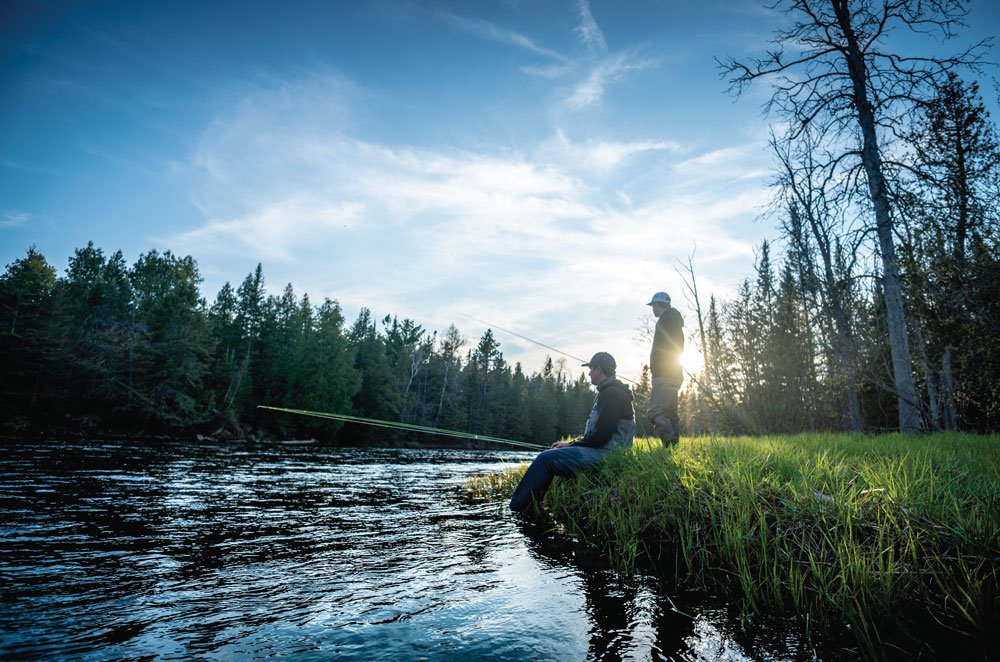 Due to their unpredictability, catching brown trout requires plenty of patience.

I’ve never been one to believe in spooks or embrace mythos, but it’s hard to ignore the obvious. There was something to these accounts. An element of truth ran through each of them. The stories of the river dweller were more than superstition and saga.

To find the truth I began name-dropping. I’d bring her up in local fly shops, with strangers—male and female alike. You could tell if they believed or not simply by a facial expression. Some smiled, others shook their head and said nothing. The most revealing information came from those who’d get a faraway look in their eyes.

The strategy played out well and it didn’t take long to uncover the facts.

The fisherman was barely in his twenties, just the mention of her provoked the lucky angler to take out his phone and show me her picture. Like a teenager ogling at the best-looking girl in school, I found myself staring. This wasn’t an optical illusion. The fish wasn’t extended at arms length to within a foot of the camera—this was a true “giant” of a brown trout.

At that moment any thought of her legend belonging in the cryptozoology file was erased. Neither Bigfoot nor the Lock Ness Monster had a similar image to champion their cause—the picture wasn’t blurred and hadn’t been manipulated in Photoshop. 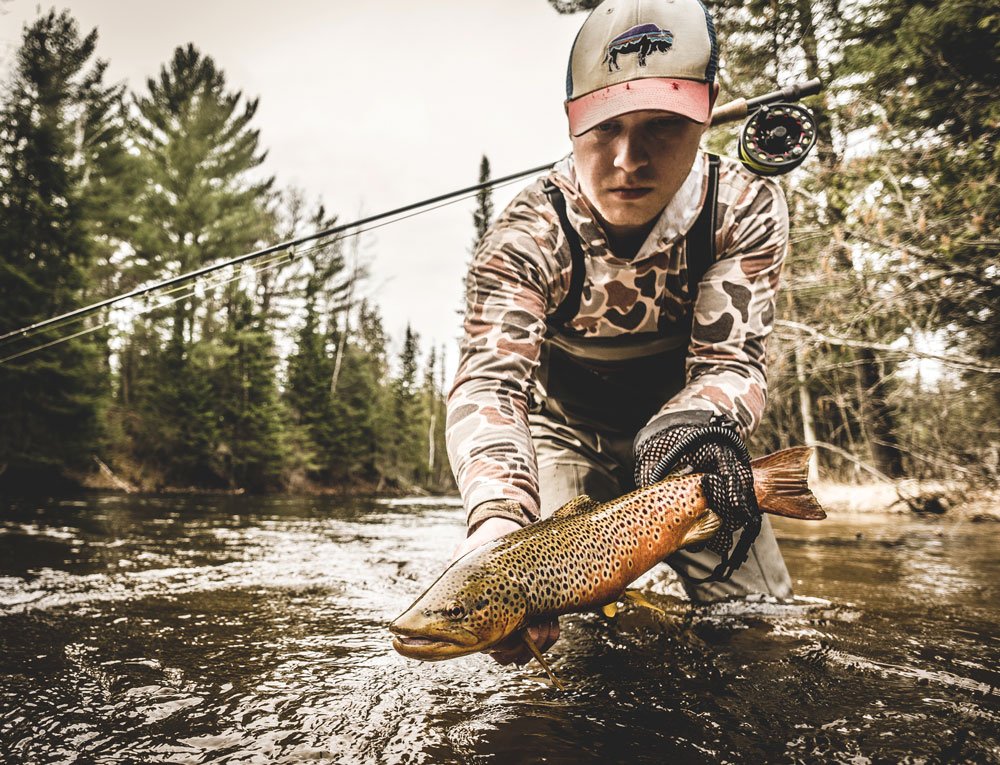 Brown trout can grow to be as big as 30-plus inches long and weigh 40 pounds.

Dressed to the nines in an elegant buttery hue with contrasting coral spots—almost sensual—she was a sight to behold. To say she exceeded every expectation and innuendo would be an understatement. She was 30-plus inches, strong and sturdy. Obviously, she knew how to take care of herself.

Instantly, I knew why some refused to mention her name. She wasn’t run-of-the-mill, average, or something you could even imagine living in the river—it was easy to see why some thought her to be an apparition.

“They’re there,” the young man acknowledged with a smile. “Caught her on a mouse pattern late one night.” Polite but curt, his sentences abrupt, the youthful fly fisher was as cagey as the wise old brown trout. He didn’t plan on sharing what he knew and I didn’t blame him—she was a trophy.

The young fly fisher used “they’re,” when referring to the brown trout, a subtle suggestion inferring more than one of these spectacular fish might live in the river. As we continued to talk of brown trout, I switched to the topic of her offspring. They were a rambunctious bunch, many over 20 inches, residing in logjams and known to possess a split personality—similar to the fish he’d been fortunate enough to land. They’d initially squatted in the river, somewhere back in the late 1800s and had thrived ever since. Even Fred Bear, the great archer, came to these parts to fish for them.

The young man soon realized we shared a mutual appreciation for the river and its secrets. We both agreed we’d never seen such prestigious yet contrary fish—a concoction that reveals the very reason many fly fishers are enamored with brown trout. Some days these fish preferred to eat a streamer, other days a dry fly or small nymph. Depending on the day their diet can consist of crawfish, sculpin, their own relatives or even a duckling. Their unpredictability is seductive.

After we parted ways, I couldn’t get the fish out of my mind. Perhaps there was something to these local ghost stories—without a doubt a wary brown trout can humble you like no other. The noble fish is first and foremost an escape artist. I’ve watched them dance to the middle of the river, wrap the leader around the only limb within sight, and break off in a matter of seconds—all with dignity. These types of encounters have forced me to ask: How can these fish mimic the escape acts of Harry Houdini when their brain is the size of a pea? Whether I’ve landed and released, or lost the fish in the process, brown trout have a way of haunting you, forever invading ones memory. 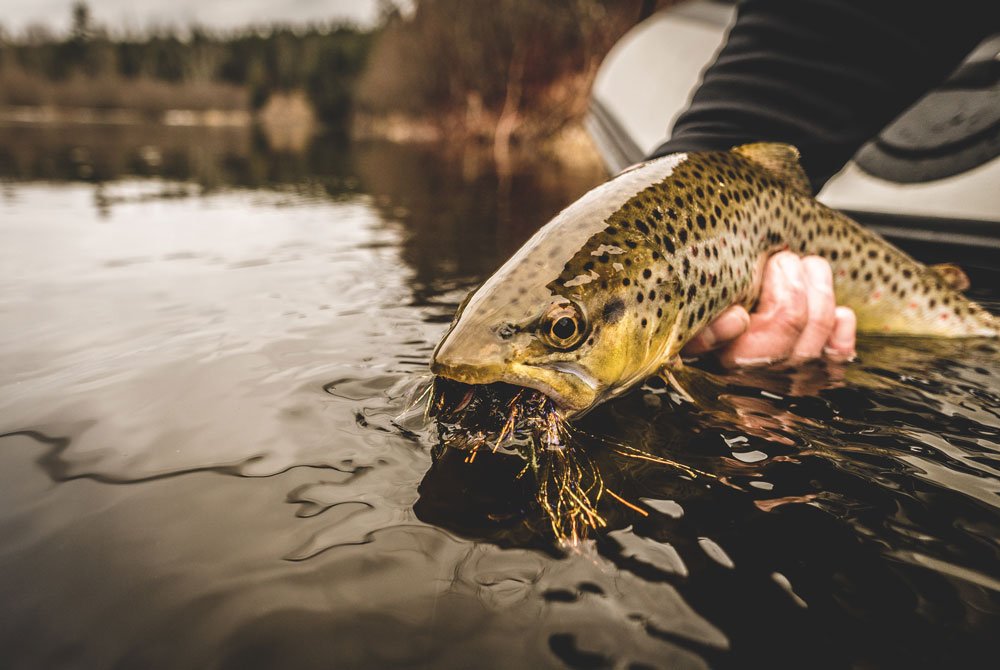 Like the brown trout I hooked last July during a Hexegenia hatch. As the golden rays of last light danced on the water and the large mayflies fluttered overhead, I drifted a hex pattern beside a logjam. I’ll never forget that drift. Without leaving a ripple the ghost sipped the fly and headed forcefully downstream. I remember it with perfect clarity, my rod was doubled under the weight of the fish. Judging by feel, this would have been my nicest brown to date.

It’s all too real to have only imagined it, but unfortunately this fish was far more than my tippet could handle. My son stood on the bank with mouth agape, “How big do you think that fish was, Dad?” How large, I couldn’t tell, but certainly big enough to haunt my memory. I’ve gone back to that same pile of logs in an attempt to find that fish, but with no success. But that fish has come to mind and successfully caught me many times over. You get the gist.

Some days a brown trout will eat with such delicacy it will make you wonder if it was a fish at all; the next moment they can eat with a vengeance. One brown may turn into a contortionist, an acrobat worthy of Cirque du Soleil; the next may not fight much after the take. Some fish erupt from the water, splattering the air with fight and flair; another may run and hide. The only consistency is the inconsistency. One more reason fly fishers have been known to drift, swing, strip, fish an entire day, or days, for a single fish … do whatever it takes to net one of these beauties. Why? Because the satisfaction that comes with beating a wise old brown at its own game is well worth the effort.

And while I haven’t caught or may never catch a 30-inch brown trout, there’s something spectacular just knowing the possibility exists. She’s definitely there, lurking somewhere. I’m obsessed with the mystery.

This summer my son and I waded to a secluded spot in the river in hopes to locate one of these big browns. We fished long after dark wondering if we’d see or land a “ghost.” We caught plenty of fish and some respectable ones, but nothing over 25 inches. As we were wading back to the truck, my son’s headlamp illuminated a large dark body. “Dad, a steelhead!” he exclaimed. A fish every bit of 30 inches swam in the light.

Was it a steelhead? Or was it a ghost? It could have been either. But at least I’ve seen a picture of the ghost.