Tacomabeast: A Truck That Inspired a Community 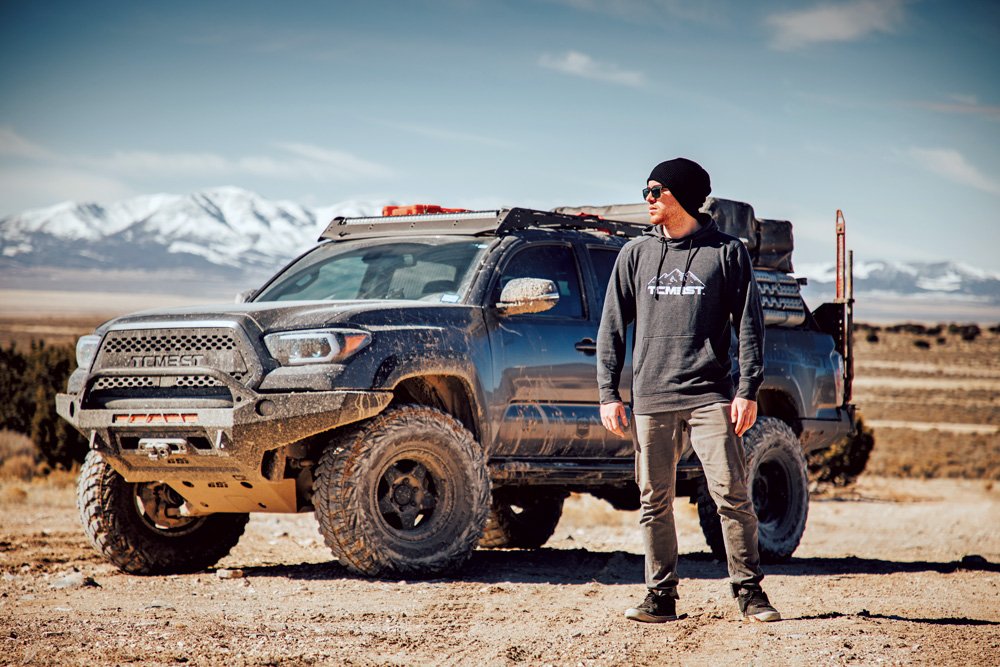 The Tacomabeast, a Flagship Rig That Gets Driven … Hard

If you know anything about Tacomabeast, you know the company is way more than a truck. It’s more than a suave guy from South America behind a phone posting videos to his Instagram account. And, it’s way more than a one-stop-shop, all-things-Tacoma website. It’s all of those things—and then some. 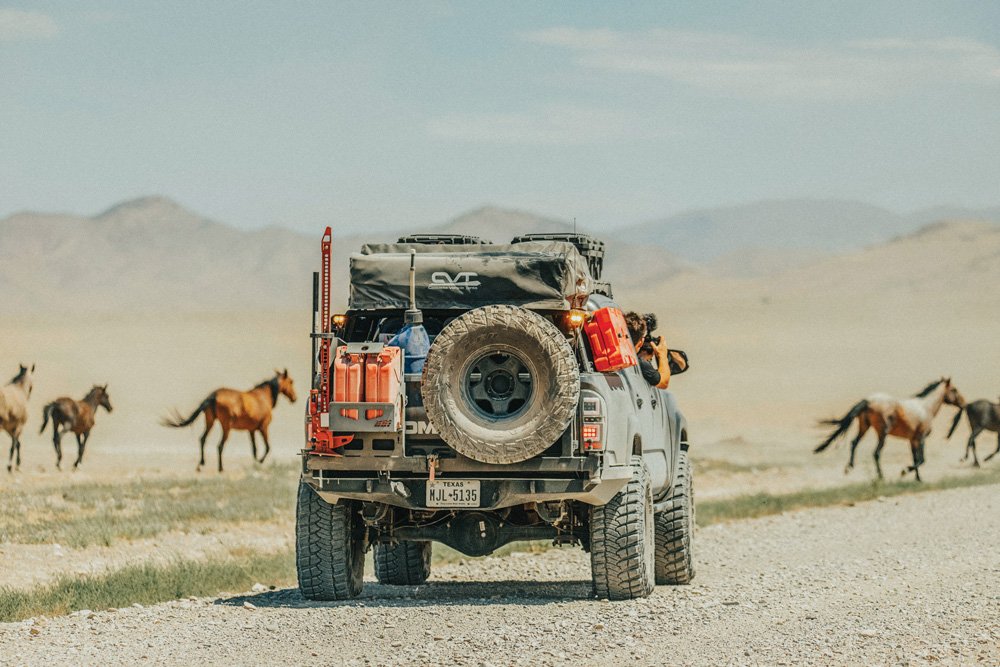 On his recent trip along the Pony Express, they got a chance to ride along with the wild horses.

Roots of the Beast

At a young age, Mateo got his first taste of overlanding with his father in South America. Mateo’s father, Miguel, was the president and CEO of a successful multi-national company. Miguel was a man who loved and respected nature and he impressed that value on his children. But sadly, the overlanding adventures didn’t last long. The Ecuadorian government stepped into Miguel’s company, dismantled it, and essentially took everything from the family.

The Tacoma shows off the CBI Off road rear bumper with spare tire carrier, jerrican holder, and HiLift jack, while the bedrack holds his RTT and Tred Pro.

With only $6,000 to his name, Miguel, a non-English speaking immigrant, relocated his two sons to Florida. Eventually, Miguel rented a small space and started importing and selling automotive friction materials (brakes, clutches, and so on). Miguel was a master at negotiating, but the language barrier impaired his business’ growth. So, he relied on Mateo to help him craft emails, talk to customers and vendors over the phone, and ultimately, negotiate deals as his proxy.

With Mateo growing up around the automotive industry it’s really no surprise he started his own company centered in the same space. However, that was never the plan. In fact, owner of Tacomabeast is miles away from what Mateo was supposed to be.

Back in high school, Mateo faced a difficult life decision; one of those “the fate of mankind is on the line” kind of decisions … get a Jeep or a Toyota? Pressured from his classmates and friends, Mateo opted for a Toyota Tacoma over a Jeep Wrangler. That’s where it all started.

Mateo proudly waves the flag of his company that went from a community social media account to so much more.

As most would agree, entering into this space can be daunting from both a financial and a “Where the hell do I start?” perspective. Mateo found the entry into overland building intimidating and wanted to create a safe place for other people to share their builds, post the newbie questions, get help and guidance, and, ultimately, start a true Tacoma overlanding community. So, that’s what he did. It didn’t come easy and he poured his heart into this project, which had no intentions of becoming a real business. He truly had a desire to share information within the community and inspire others. Eventually, the Tacomabeast page morphed from being just Mateo’s build to featuring other rigs. The likes, followers, comments, and shares started to amass, and this “project” grew legs very quickly.

Decisions Bigger Than a Truck

Mateo eventually graduated from high school and started working on his college degree. He couldn’t wait to get to class every day and decided he would pursue a degree in finance with a minor in business logistics. He kept up with Tacomabeast during his college years. The community started growing and his obsession with it grew even more. 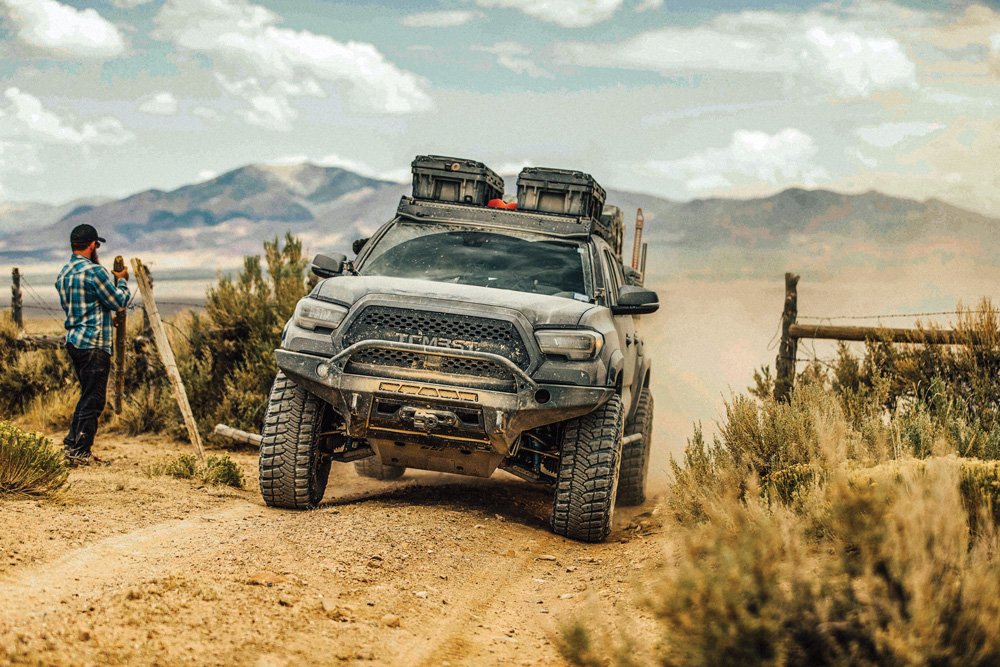 He also started working with his father and the two grew even closer. Mateo knew that as he neared graduation, he was going to have to decide: pursue a career in finance or work side-by-side with his father. Fortunately, Mateo was offered an internship with a large financial institution, and he was excited. Mateo put on his suit the next day, looked in the mirror, and realized he actually had a third option: make Tacomabeast a real company. 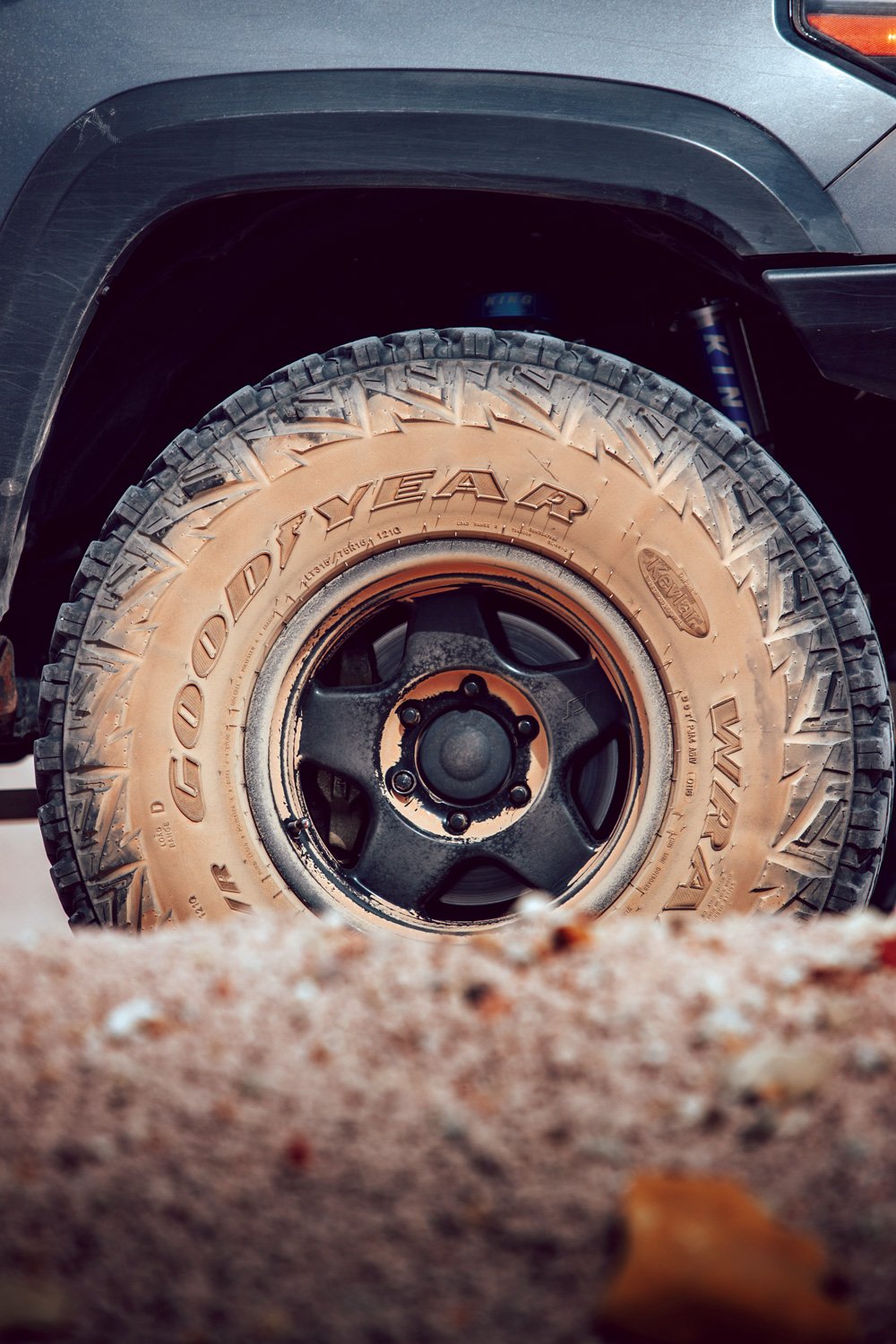 Adventures off-road are no problem with the Stealth Custom Series wrapped in Goodyear Wrangler MT/Rs.

Pursue a career in finance, work alongside his father, or pursue his passion? Concerned about letting his dad down, Mateo still made the decision to go with the least secure of his options and officially launch Tacomabeast. While Miguel was disappointed he would no longer be working with his son, and likely concerned that he’d be throwing away a great opportunity in finance, he gave his support.

With his degree in finance and background in the automotive industry, Mateo officially launched Tacomabeast in 2012. His website, which initially was cobbled together just enough to sell one product, needed some significant maintenance. Keychains, patches, stickers, and shirts were being added to the page and the traffic was growing. His friend, Marcos, who initially helped him build the page, was now managing the website almost on a full-time basis, without pay.

“THE STORY OF TACOMABEAST MIGHT EVEN GO BACK TO A TIME BEFORE MATEO WAS EVEN BORN.” 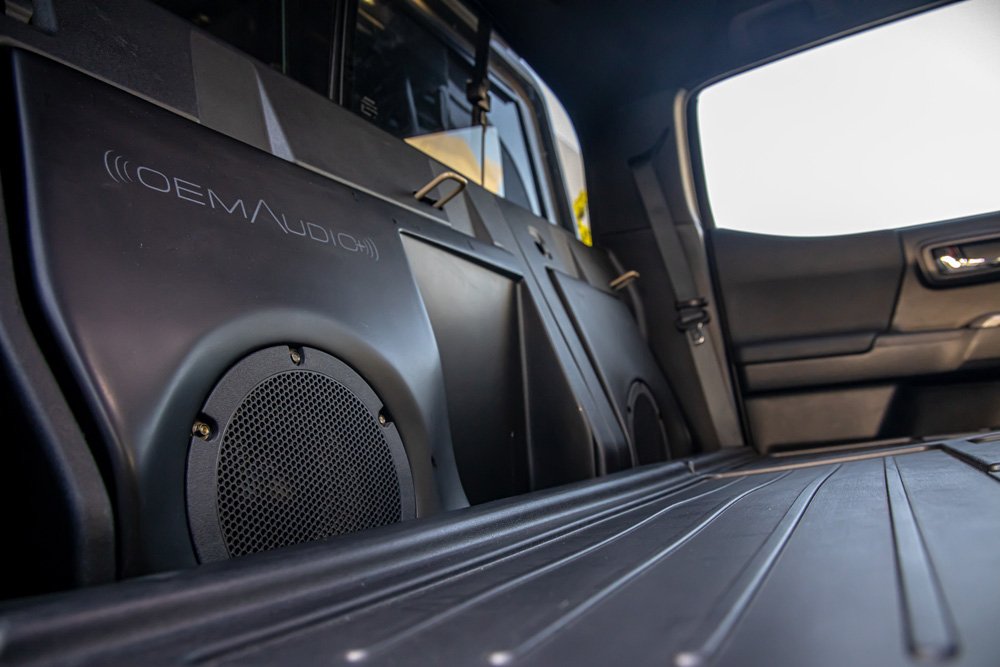 Mateo quickly grew tired of selling apparel and really wanted to get into creating that one-stop shop environment for all things Tacoma. He saw lots of small business owners in the market who were struggling to reach their target audience and saw an opportunity to network together. Mateo approached lots of different manufacturers and fabricators and pitched the idea of becoming partners with Tacomabeast, airdropping orders, and creating that Tacoma ecosystem his followers wanted. He was rejected—a lot. That was until he connected with Mike from CBI OffRoad.

Almost immediately, CBI signed with Tacomabeast and to this day they’re still partners. In fact, Tacomabeast now partners with tons of different fab shops, including C4 Fabrication, Fab Fours, and Relentless Fabrication. The company sells a wide range of first- through third-gen Tacoma-specific and universal off-road and overlanding gear, all in Mateo’s dream ecosystem.

What About the Flagship Rig?

Mateo is now on his second Tacoma, a 2018 third-gen. The truck has taken approximately two years to build, but as we all know, our builds are never really done. Lots of organizations contributed to the current Tacomabeast flagship rig, including Prinsu Design Studio, Heretic Studio, Goodyear, Decked, Spyder Auto, Nitro Gears, and, most recently, Magnuson Superchargers. 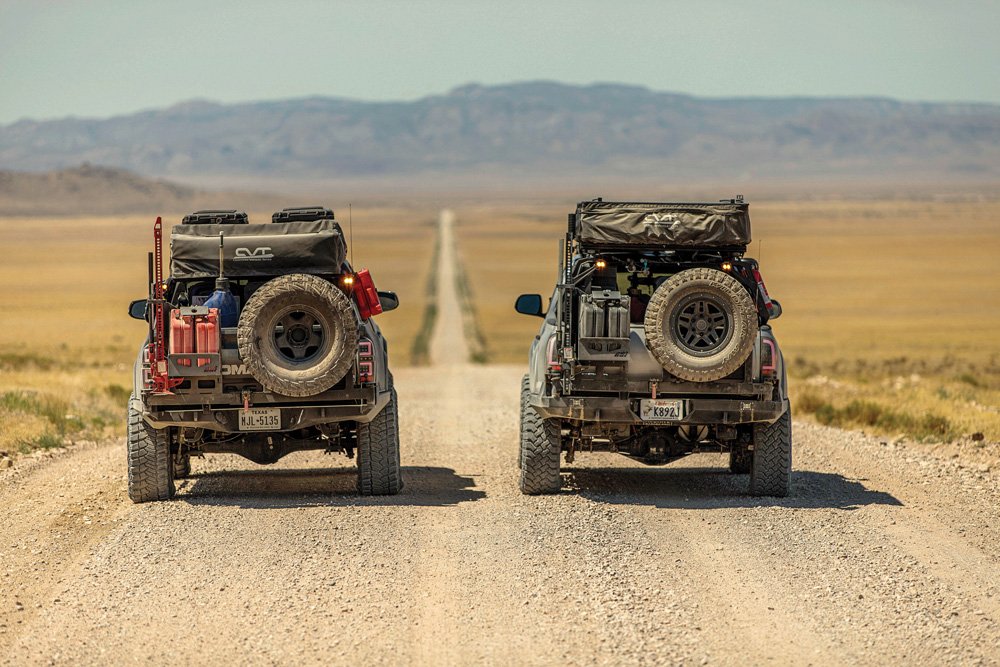 Mateo and Ken Hoglund are twinning with their matching rear setups.

This is not your average flagship rig and it certainly doesn’t sit in some office lobby space collecting dust. The Tacomabeast gets driven … hard. In fact, Mateo just finished a trip with Ken Hoglund on the Pony Express where he spent every night sleeping in his CVT Mt. Shasta Stargazer Summit tent. The two beastly Tacomas covered 673 miles of pure off-road terrain from Salt Lake City to Lake Tahoe. The longest trip this rig has seen so far was 6,281 miles from Miami to Idaho, then to California, then back to Miami. So yes, this truck gets driven hard. 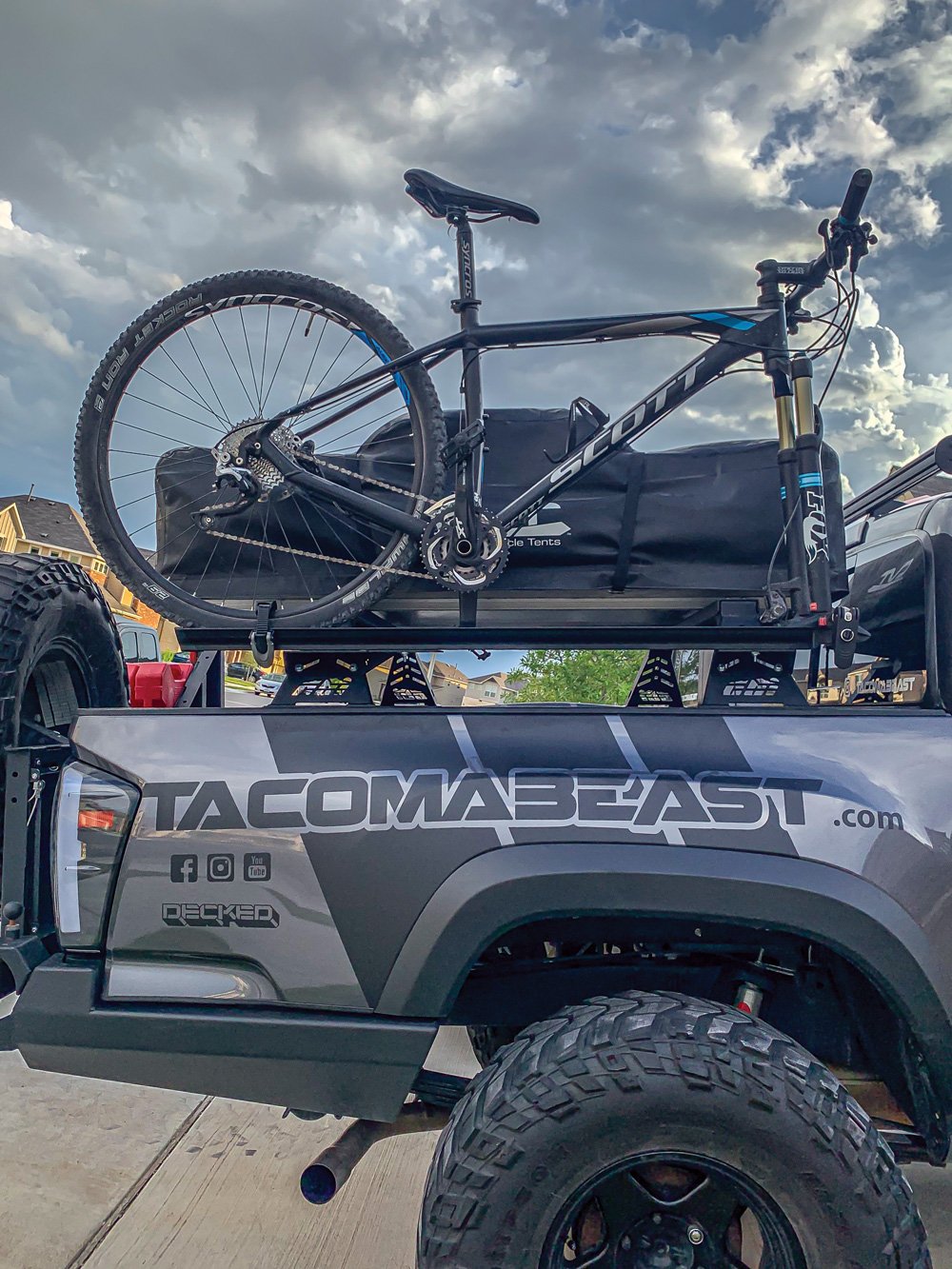 The Tacomabeast Tacoma is able to carry it all so Mateo can enjoy all his favorite activities.

The truck sits on 2.5-inch King shocks, 16-inch Stealth Custom Series F5 wheels, and 315/75-16 Goodyear Wrangler MT/Rs with Kevlar. While the install is pending, the rig will also benefit from a Stage 3 Deaver leaf pack, supported by Locked Off-Road bumpstops. All this finely tuned suspension makes for a perfect ride on and off the trails. 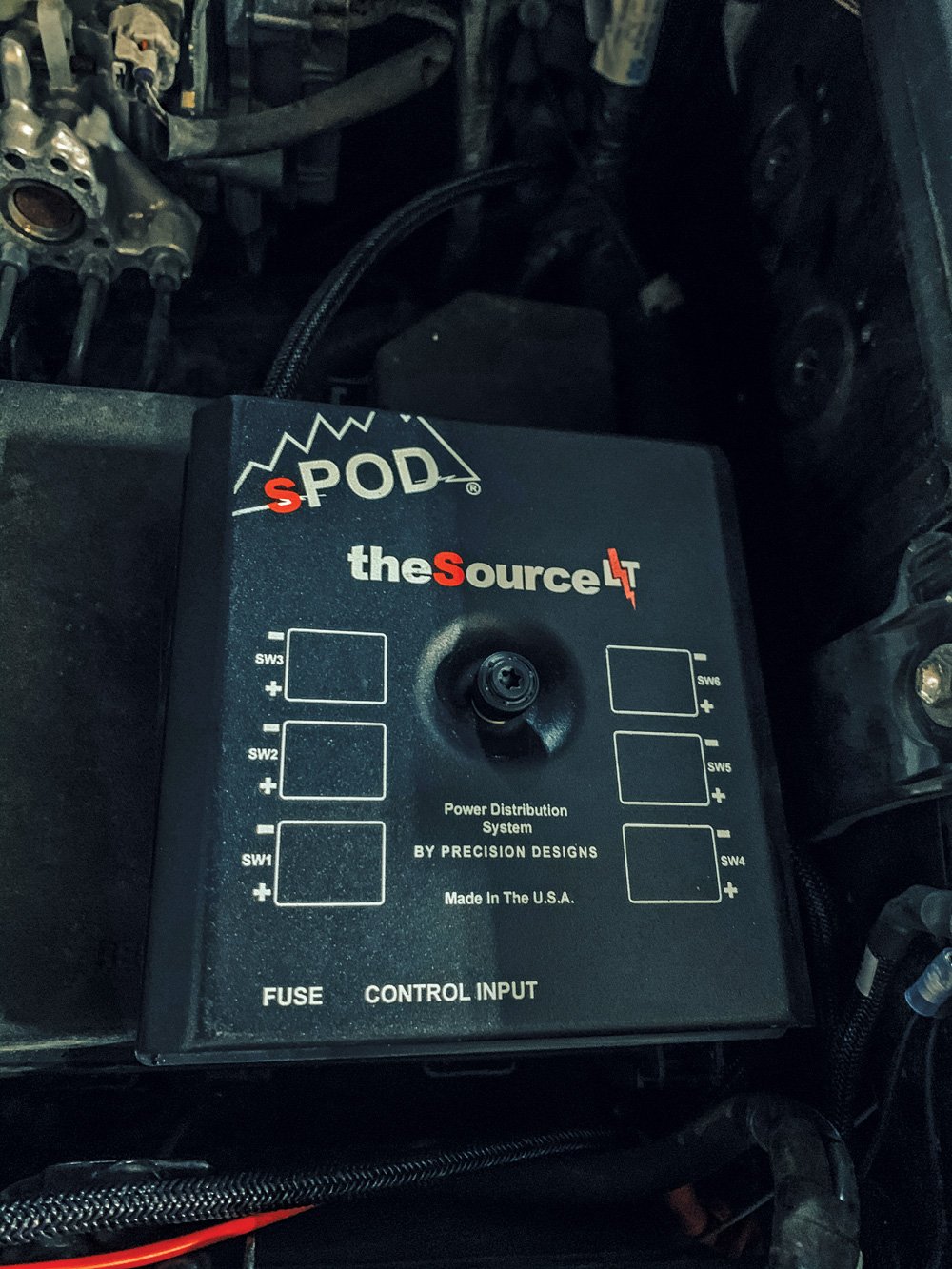 An sPod Bantam controls all the electronics in the Tacoma.

Of all the mods, Mateo says his favorite is his Dometic fridge. While it serves the obvious purposes, it serves an even greater need for Mateo: ice cream in the desert.

In 2019, Tacomabeast became a stewardship partner with Tread Lightly and in one month they raised $13,000 for the organization’s trail cleanup efforts. Mateo hopped back into his truck and drove from Austin, Texas, to Salt Lake City with an oversized check, ensuring to take and post pictures of the check at each state line. The two organizations collaborated on a meet-up at Four Peaks Wilderness Area that same year and helped remove 10,000 pounds of garbage. 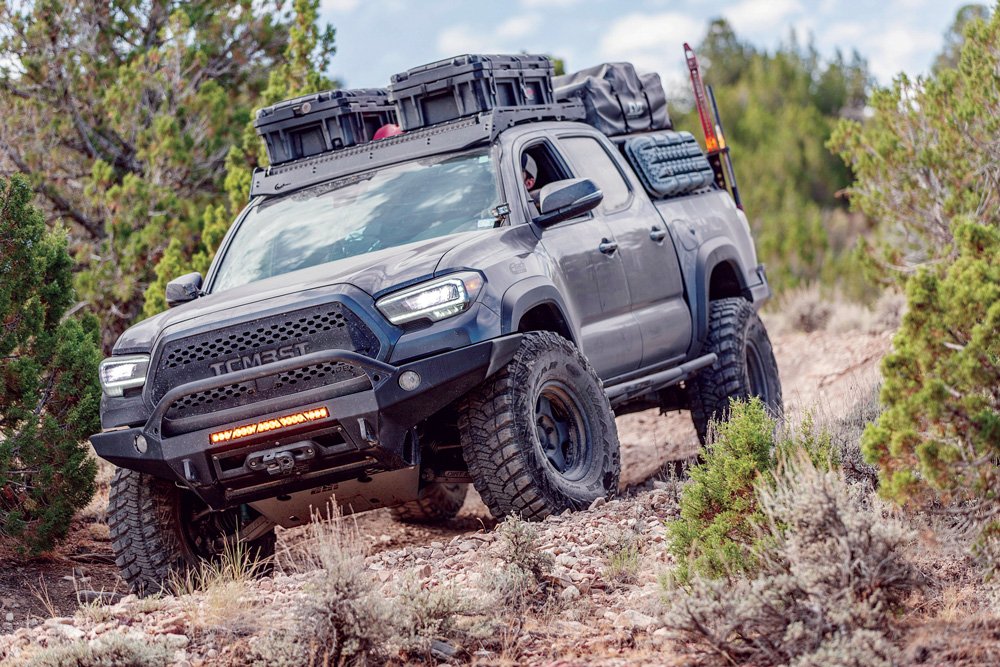 What scares Mateo is that with the current quarantine measures in place, organizations like this could lose funding. That’s why he’s made it a part of his business model to continue giving back to Tread Lightly and organizations alike. Tacomabeast now sells a collaborative Tread Lightly patch and T-shirt on their website where 100 percent of the proceeds are donated to the organization.

This event and business venture had a significant effect on Mateo, the direction of Tacomabeast, and without question, the many, many others involved in the trail cleanups. If you’re not involved, Mateo urges everyone to pick up a Trasharoo or something similar, help preserve nature and the trails we use, and leave no trace behind.

Led by Mateo, Tacomabeast now comprises of 10 full-time staff, and soon to join the team is Miguel. The company is venturing into designing and manufacturing some of their own products, with lots of projects already in the pipeline. What was once an Instagram page with a cool skull for a logo is now the growing organization widely known in the Tacoma world. 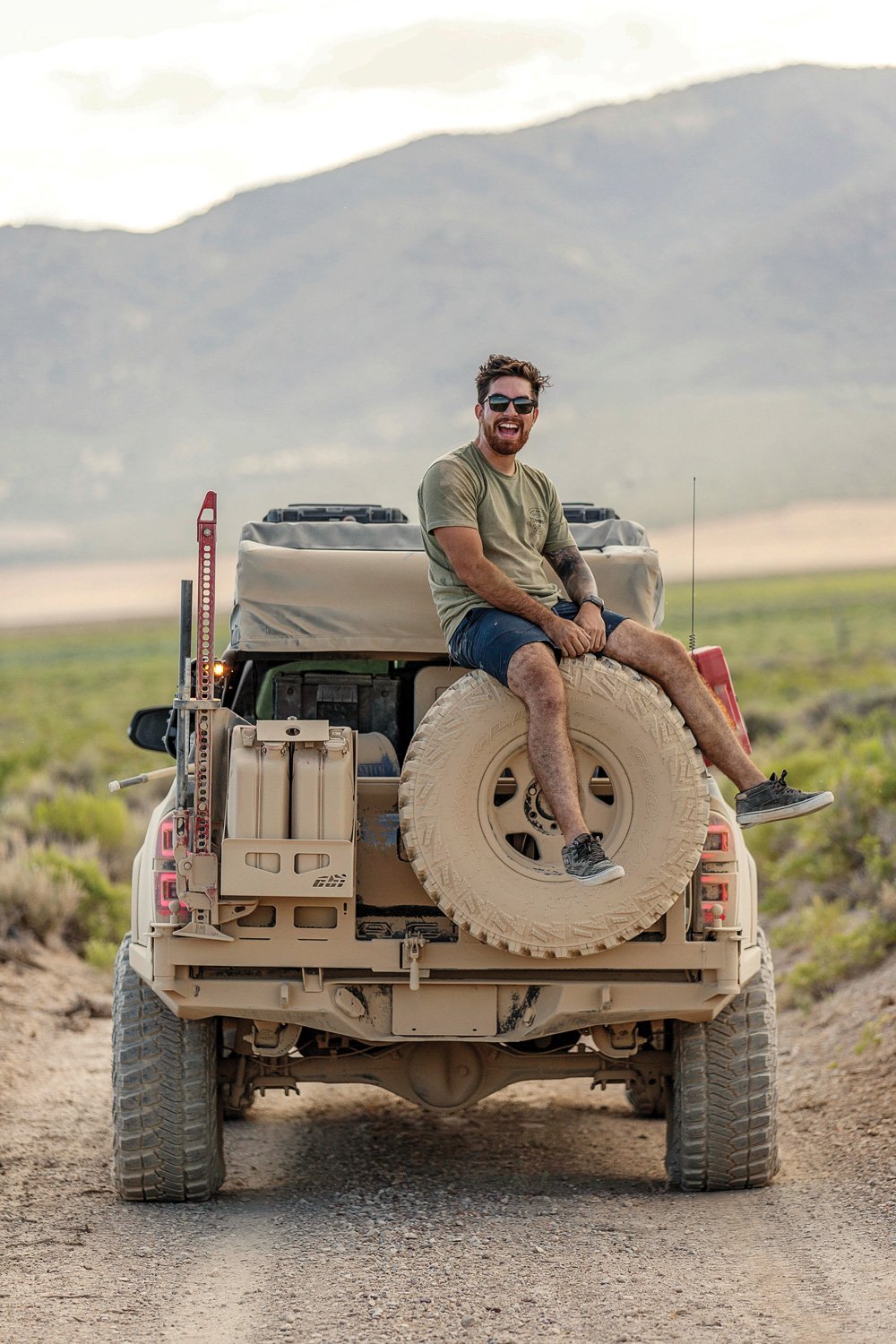 You can’t fake the excitement on Mateo’s face. Nothing beats getting out and getting a little dirty.

And while Mateo continues to grow the business and keep the Tacoma appeal alive for the younger generations out there, he will still be doing his own fair share of exploring. One day Mateo hopes to cross over the border to South America where they plan to drive down to Tierra de Fuego, Argentina. Driving back down to South America, where it all started, would be just the thing to see how his overlanding roots grew a tree of life.

Editor’s Note: A version of this article first appeared in the Winter 2020 issue of YOTA Magazine.