→ Submit your rig and win a Tread magazine feature of your truck! ←
Get the Magazine
Features

There is a war being waged on the truck battlefront. For years, American manufacturers touted their Open-C channel frames were designed to flex, while the Japanese market reveled in their fully boxed frames, with their strength and their other advantages they had over the American market. How really true was all of this?

Well, there was a reason why it took all the way until 2017 for Ford to finally relent and build a hydro-formed box steel frame, and it turns out it really was about flex. Modern day boxed frames are made using a process called hydro-forming. Hydro-forming is where a sheet of steel is placed into a one-sided die, which is then sealed, and hydraulic fluid is then pumped into the die at incredibly high pressures to force the metal into complex shapes. These super complex shapes would not be able to be stamped by traditional tool and die stamping processes.

These incredibly complex structures have allowed the use of extremely high-pressure steels, at thinner walls than before, to save weight and offer a super rigid backbone for the truck to ride on. This made for a very challenging engineering issue to overcome, as before, the suspension flex in a C-channel frame allowed some of the road energy to be absorbed by the frame itself, lessening the work load on the suspension. The rigidity also poses other issues, as well. Extreme rigidity means that there is a very low spring tolerance to the frame, which ultimately leads to stress cracking if pushed beyond the limits of what the frame was engineered for. Alternatively, Open-C channel frames are made from thick lower pressure steel, with a low harness temper that can flex millions-upon-millions of cycles and never develop a stress fracture.

While Japanese manufacturers were highlighting the strength, ride and handling of their smaller trucks and SUVs, American truck manufacturers were losing the consumer battle trying to weigh the durability, ease of repair and up-fitting (commerical/industrial) of C-channel and investing in boxed frames. Ultimately, Chrysler, General Motors and Ford relented and started manufacturing their trucks with semi-boxed frames in the late 1990s. These frames featured boxing under the engines and front suspensions to ensure a very rigid surface to mount to, and put increasing number of cross members in to improve rigidity, while still allowing frame flex to occur in the remaining portion of the frames, which were open C-channel. 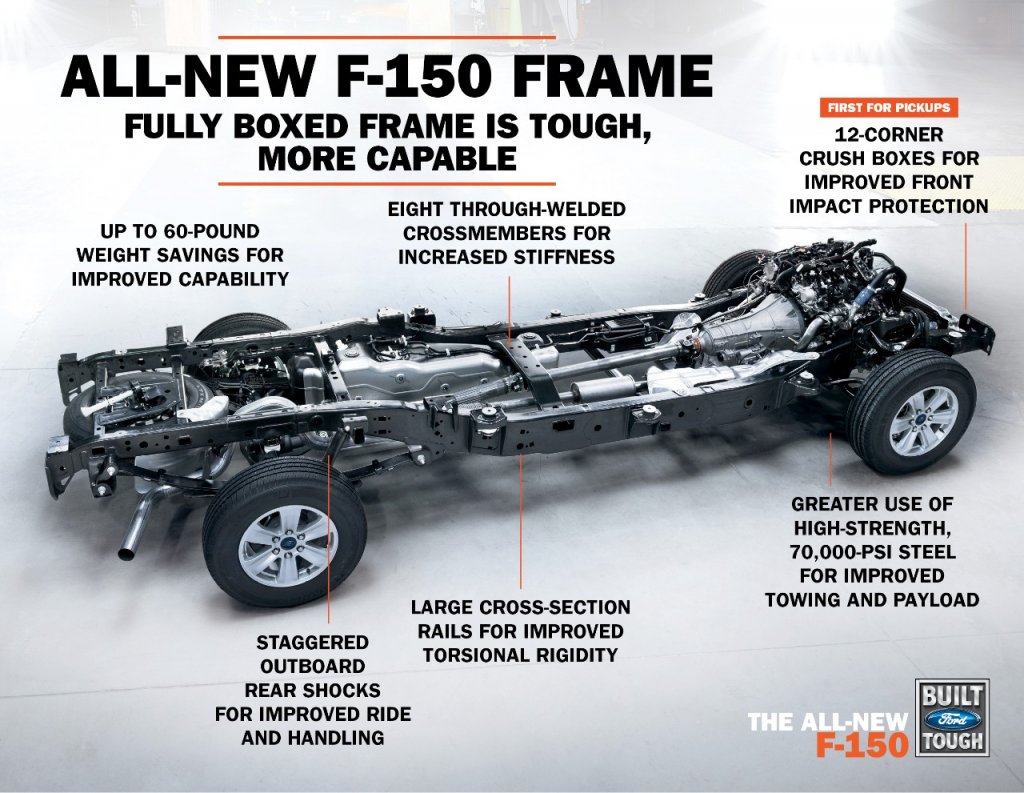 This was working great for the American manufacturers through the dot-com bubble of the early 2000s, when excess was the American way. Chrysler and General Motors started experimenting in the first attempts of fully-boxed frames in heavy duty trucks. Then, the U.S. recession started in 2005 and American manufacturers were hit with incredibly low sales. Chrysler and General Motors had to be bailed out by the US Government and Ford saw the fires and mortgaged everything it owned while it still could, and escaped financial bankruptcy. In the ruins of the US Automotive industry, The Big Three went at each other’s throats in an effort to keep their trucks on-top.

All of a sudden, the Big Three were drumming every cent of R&D money they had into developing a new breed of trucks that was going to one-up each other and take the throne of the market. Now we are here, with every manufacturer offering a fully-boxed frame on their trucks, with the exception of three models.

Who you might ask? Toyota’s Tacoma and Tundra pick-ups and Ford’s F-550 truck.

Why you might ask? Frame flex is essential when carrying heavy-loads in extremely demanding scenarios that might lead to stress cracking. And in Toyota’s case—it is a lot easier to keep a C-channel frame from rusting to death.

If you would like to know more about the mad science behind hydro-forming steel, Wikipedia has a great article and series of animations on how the process works.