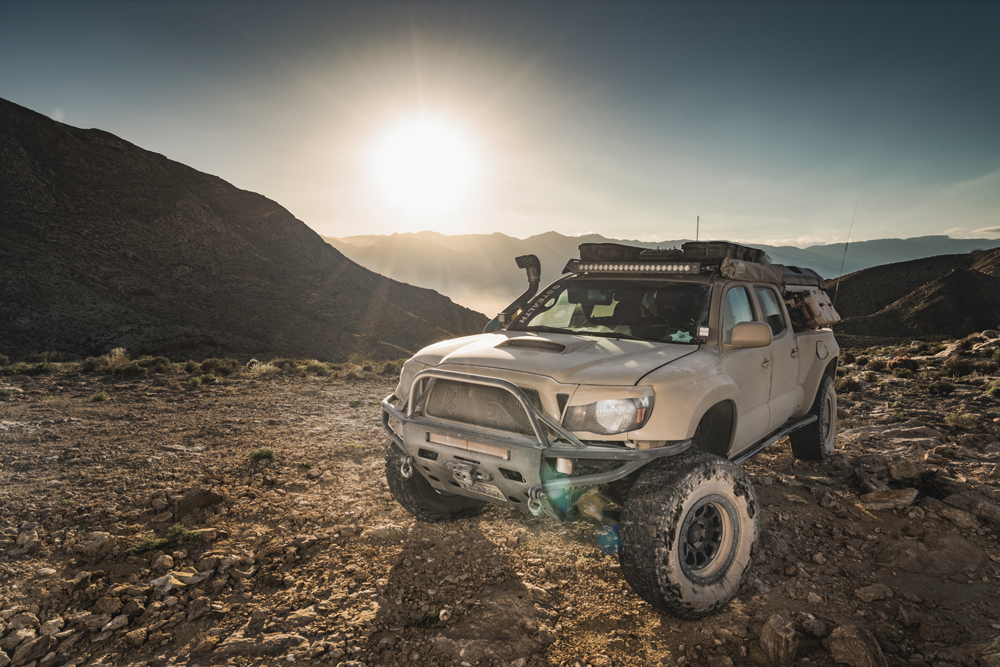 Compared to a lot of the more traditional off-road vehicles you could take under your wing, the Toyota Tacoma has quickly become one of the best selections you could opt for, and for a perfectly good reason (amongst many): they’re pretty f’in awesome.

I spent some time in the latest model TRD Sport last year on a couple occasions—one for mostly city cruising evaluations and the other where it was better destined to go, completely off pavement and in the dirt for a gig at the King of the Hammers. It was beyond comfortable and fit my vibe more than I feel a Jeep JK would while also being modification friendly. The Taco seems to be that type of truck for most beginning enthusiasts: lift it, install a decent set of wheels, throw your stuff in and off you go. 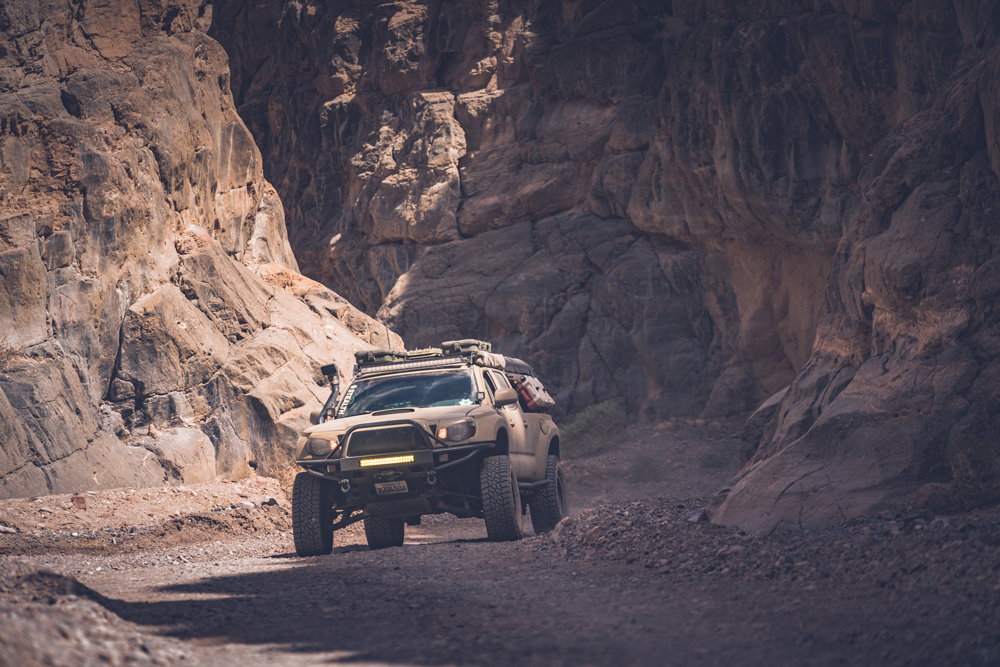 A Pelfreybilt front bumper with BAMF skids and ADV fenders give this Taco a beefy AF look.

Off the Deep End

For Alex Chan, this was certainly the case—to find a truck with multi-purpose: comfort on the daily commute and comfort when it’s time to go play on the weekends. Though it is an older generation model, it’s still a very formidable Tacoma. At first he thought a lift kit and wheels would be enough to start off with, but the forums, they sucked him in good. Alex says, “I saw a few other builds on Tacomaworld, which got some ideas going.”

After experiencing his first group trail run with some local off-road enthusiasts, he started to make more changes, modifying by specific needs and wants that each trip produced. One look at Alex’s Tacoma and it’s clear: he’s gone way off the deep end from simple and “good enough” into “don’t mess with this” territory. Scan his Instagram if you don’t believe us…

“I can take it on mild trails but can easily go fast on dirt and desert roads. It can haul a lot of stuff and be out for extended periods of time, but usually I daily drive it.”

Gone is the simplistic look and feel of the original Taco shell; now it’s prepped for doomsday, “kill the walkers” action, though Alex made no mention of it being destined for such type of messy activity. “The truck can do it all…to an extent,” he says. “I can take it on mild trails but can easily go fast on dirt and desert roads. It can haul a lot of stuff and be out for extended periods of time, but usually I daily drive it.” Given the amount of gear we see it moving around in these photos, “doing it all” is an understatement.

Having owned the pickup for some time now, Alex continues to make tweaks to the Taco with each trip to the outdoors. In the beginning, taking a few mountain bikes and friends to go riding required little thought, but trail runs demand more attention.

“If I knew then what I know now, I’d have started with my current setup and made adjustments from there instead,” he says. “That would’ve saved lots of time and money over the long run.” In fact, astute Tread readers may­­—or may not, since it looks so different—recall this truck from our premier issue. The makeover makes it completely indistinguishable from its previous life. That’s how real-world experience can evolve a build. 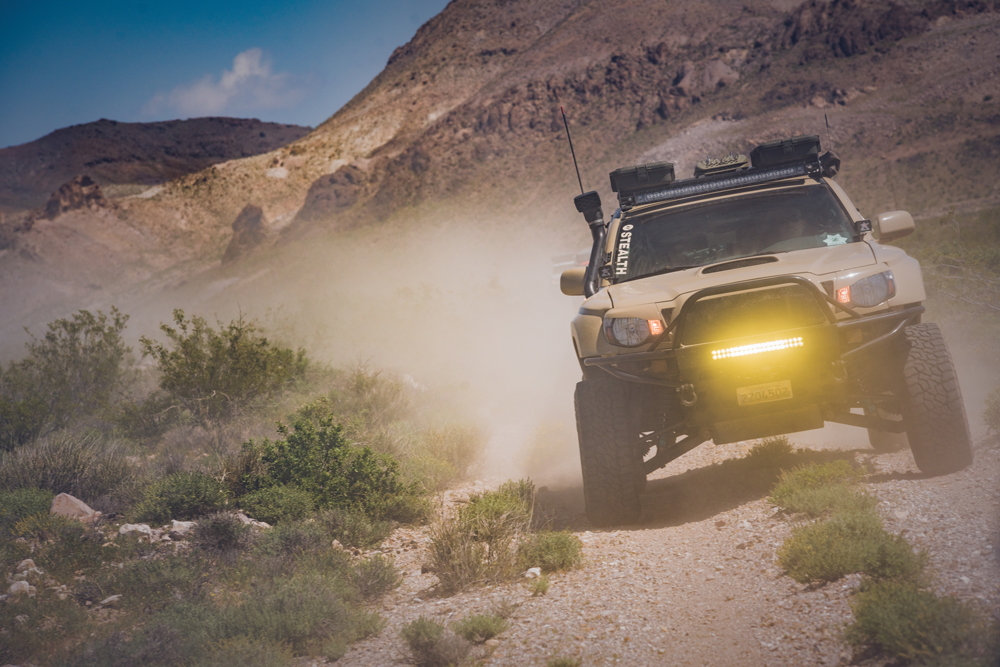 Not just a weekend warrior. When not eating up dirt trails, Chan drives his Taco daily. 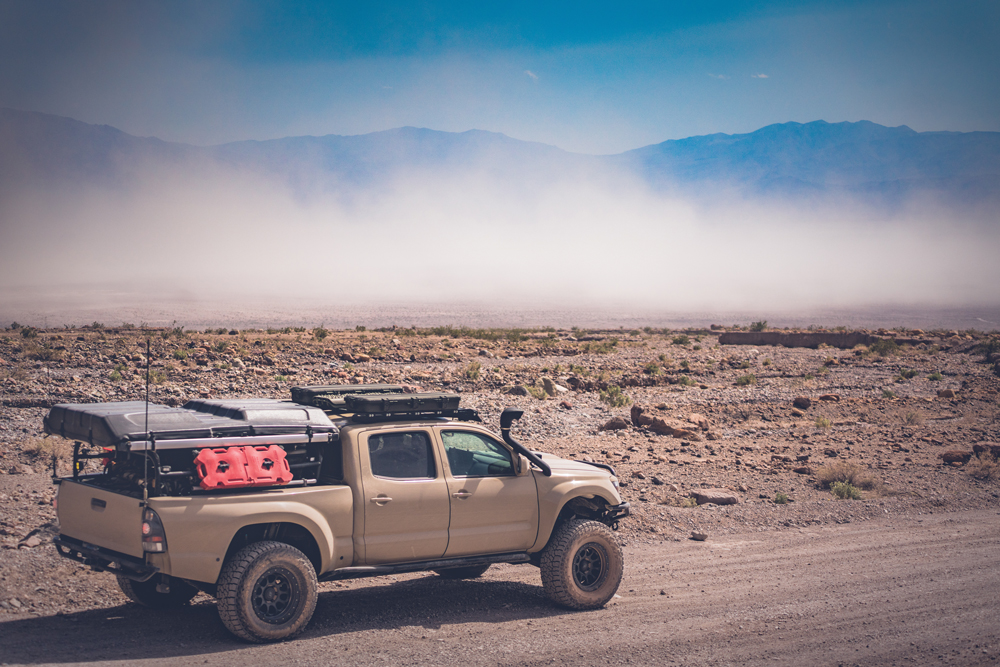 With a Tacoma under your control, how could one not follow Toyota’s current slogan? Alex’s Tacoma has been on several trips since purchasing it certified pre-owned back in 2012 with only 40K on the odometer.

“For $25K, it was in decent condition,” he says. “All it needed was a little TLC but overall it was a good starting platform.” So far, some of his favorite getaway destinations include some of the forest areas that lie just north of home in the outskirts of the Bay Area, including Slick Rock (not to be confused with the popular ‘80s rapper), Eagle Lakes, Deer Valley and as far out as Joshua Tree. His longest trip took Alex to Grand Canyon North Rim, where it wasn’t just a long drive to get there, but a couple hundred miles were spent off-road driving through the area.

“One look at Alex’s Tacoma and it’s clear: he’s gone way off the deep end from simple and “good enough” into “don’t mess with this” territory.”

As the truck sits now, its current setup is the result of recent trips that involved lots of off-road maneuvers that covered plenty of distance and camping at remote locations. The truck bed houses the Freespirit Recreation Adventure Series 49 roof top tent and annex room, which is equipped with a solar panel to provide power solutions where power’s in limited supply or simply not available by traditional means. Other creature comforts include the 50-quart ARB fridge that’s mounted to an ARB fridge slide for easy access to cold beverages and food storage. 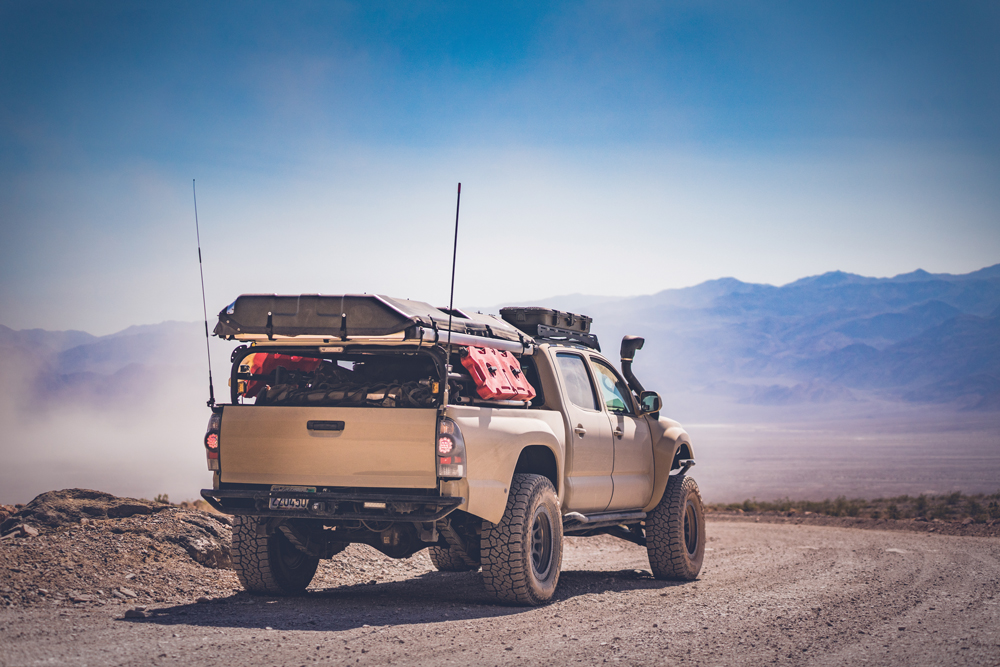 A BAMF bed rack at the rear and a Prinsu Design roof rack up front help the Tacoma house enough gear for extended trips. 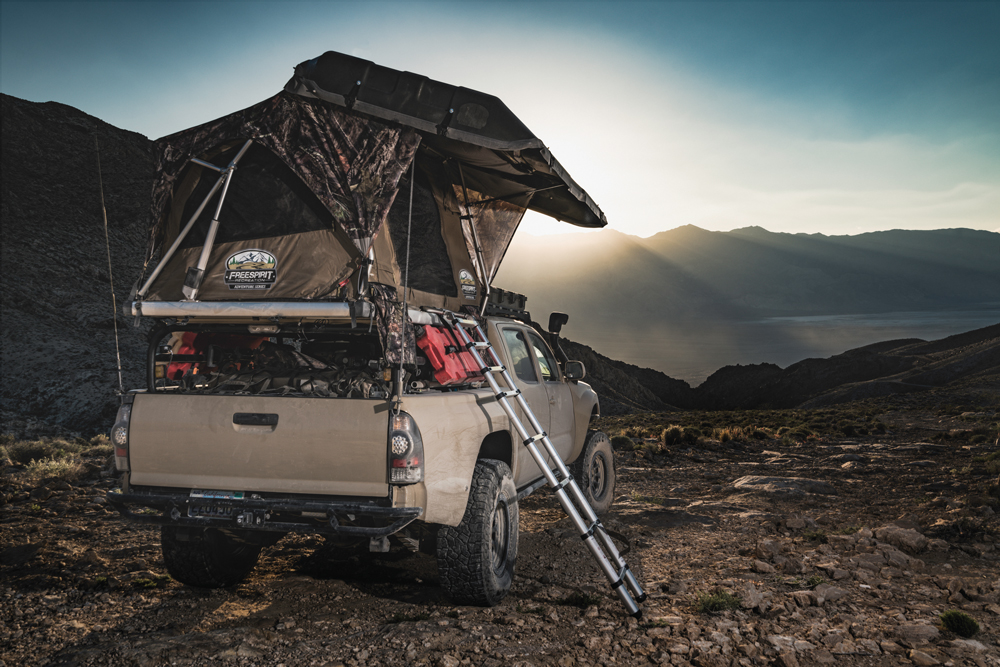 To help give the factory 4.0L V-6 a little more power, Alex bolted on a supercharger and intake kit, both from Toyota’s in-house TRD division, better known to enthusiasts as the Toyota Racing Division. A custom-made engine snorkel ensures that not only fresh, but also clean, air is delivered to the intake, while preventing other dirt or debris from entering during off-road excursions. A little more power is extracted with the addition of Shortie headers from Doug Thorley.

“As the truck sits now, its current setup is the result of recent trips that involved lots of off-road maneuvers that covered plenty of distance and camping at remote locations.”

Inside, the Taco’s cabin is decorated with enough flair to drive a TGIF employee insane. The ceiling is covered from front to back with various morale patches from his friends and his travels. An AutoMeter boost gauge provides detailed supercharger PSI readings from the TRD blower, and basic necessities, such as a Cobra CB and Yaesu ham radio are on call for use whenever he needs to reach out to any other friends on the trail to warn them of any oncoming hazards or to shoot the shit. 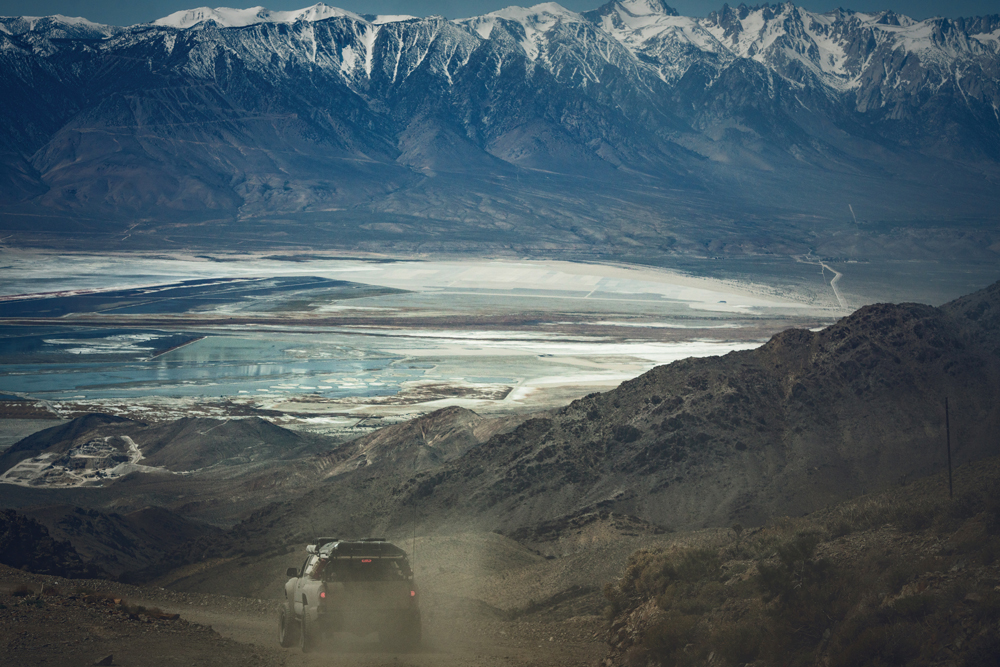 Chan continues to make tweaks to the Taco with each trip to the outdoors. 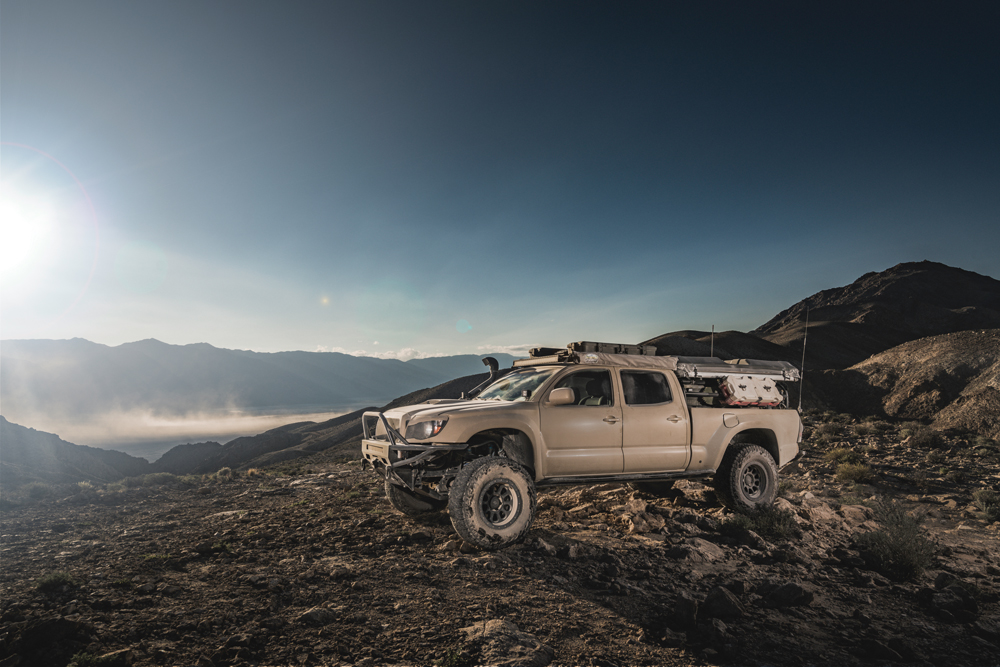 This mean stance is thanks to a Dirt Designs long-travel race kit coupled with King coilovers in the front and a DMZ SUA long-travel kit with Deaver HD long travel springs and King triple bypasses and air bumps in the rear. 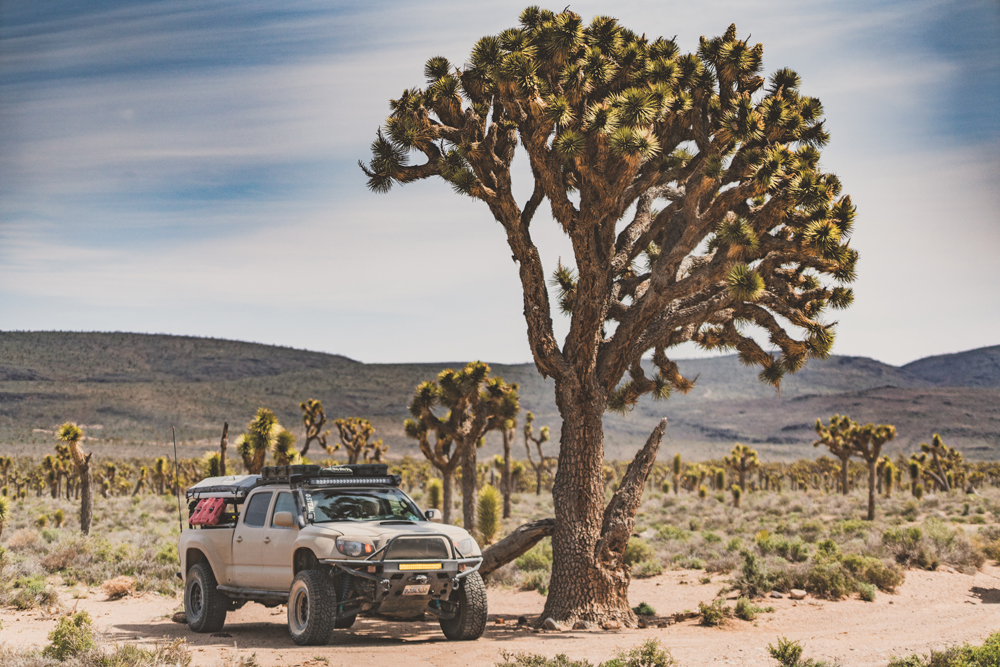 From Slick Rock to Joshua Tree to the Grand Canyon, Chan and his Taco has been there. The only question for the pair is, “Where to next?” Keeping things lit AF (yes, we’re using any opportunity to use that word whenever possible) are plenty of lighting accessories from Rigid and SRM, as well as replacement Depo black headlight housings that have been retrofitted with LED headlight bulbs from PIAA.

Alex set out to build a multi-purpose rig that can be daily driven as well as take on some serious trails when desired. After some trial and error and a whole lot of hands-on experience, we’d say that he not only accomplished, but dominated his goal. This Taco certainly has versatility in spades with the looks to match.

“The make over makes it completely indistinguishable from its previous life. That’s how real-world experience can evolve a build.”

To see some crazy off-road eye-candy featuring Alex’s Tacoma in various terrains and weather conditions, follow him on Instagram at @sytfu510, and be sure to let him know that you found him through your friends at Tread! The bed has enough storage capacity for essential gear and tools and then some. The cockpit’s layout is outfitted for function.