Get the Magazine
Features, Jeeps
TEXT & IMAGES by CHRIS COLLARD

Hitting the Trail with the 2020 Wrangler JT Gladiator 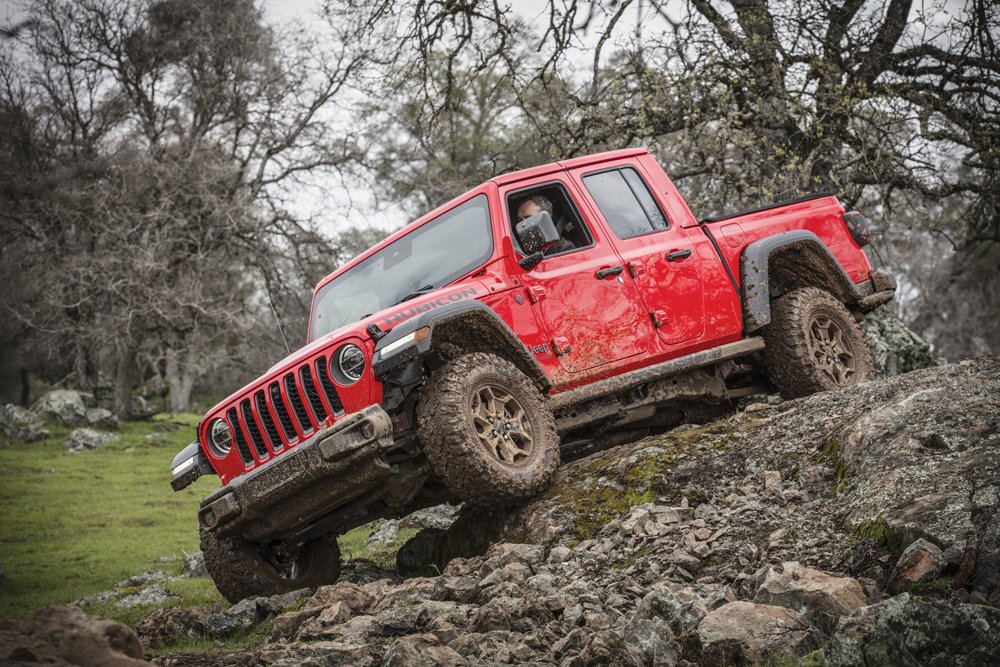 Return of the Warrior

At the end of World War II, Willys Overland emerged as a major player in the U.S. automobile industry. Having produced more than 600,000 vehicles specifically for the war effort, its role as a peace-time manufacturer would need to expand. In 1947, the first Jeep “utility” truck rolled out of its Toledo, Ohio, facility and the rest, we will say, is history.

The Willys pickup was phased out in the ’60s and replaced by the fullsize Gladiator, which claimed numerous “J” designations and enjoyed a 26-year tenure. The midsize Comanche, introduced in 1982, ended production in 1994 and the seven-slot brand would be bedless for more than a quarter century. Jeep has since hung a few carrots in front of pickup devotees with their annual batch of concept vehicles. The J12 Scrambler, Nukaiser, and Crew Chief 715 prompted the $64,000 question—when was Jeep going to get back in the pickup game? Enter the 2020 Wrangler JT Gladiator. 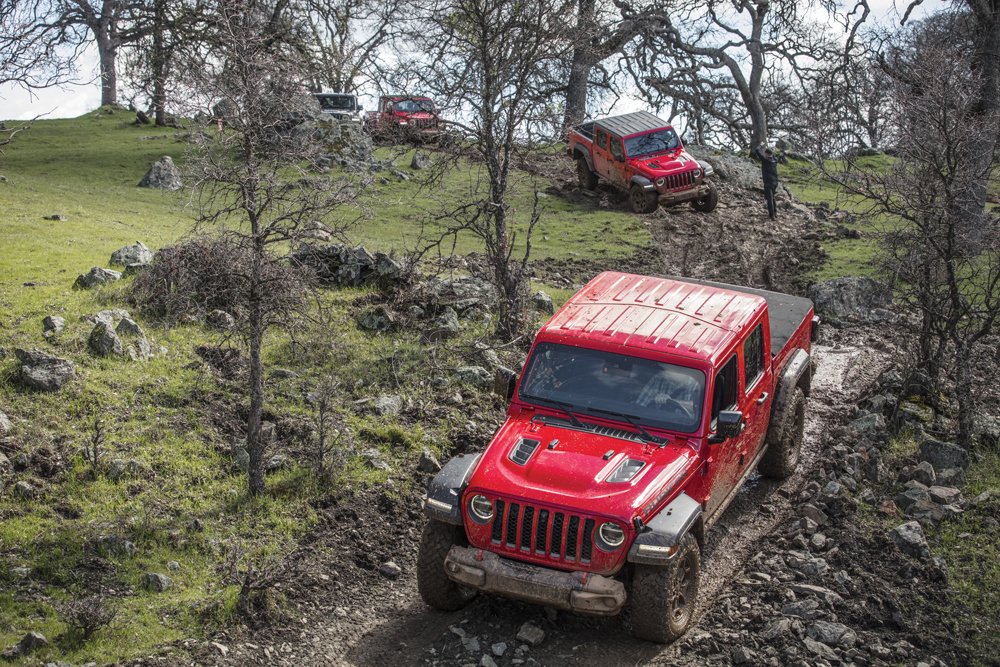 Seven-slot aficionados will notice grille slots are a bit wider than the JL. The reason is to allow more airflow to the radiator to accommodate increased demands while towing. The gadget in the middle is the new TrailCam.

While most money would have been bet on Jeep simply stretching the four-door Wrangler and dropping a bed on the back, the team in Toledo knew that being competitive in the truck market would require, well, building a truck. They worked with Ram to design a chassis worthy of solid payload and towing capacities, as well as Dana and Fox for upgraded axles and shocks. As is the case with the new-generation of Ram trucks, the frame is comprised of high-strength steel to reduce weight and increase rigidity. 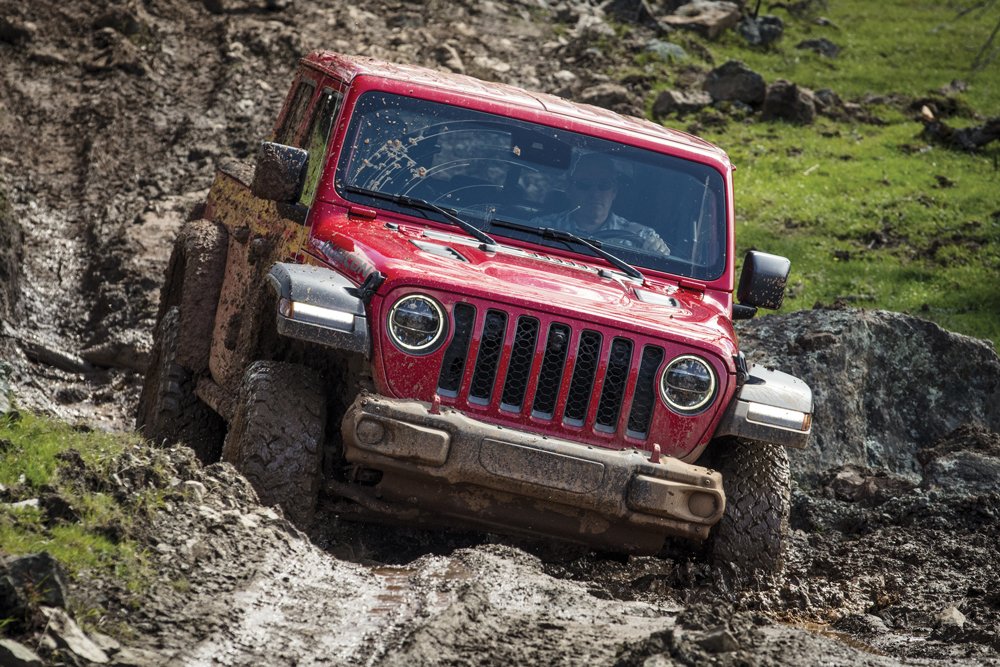 With a solid front axle and locking differentials, the JT Rubicon is exceptionally capable and in a class of its own.

Raising the hood reveals a Pentastar 3.6L V-6 tuned to produce an impressive 285 hp and 260 lb-ft of torque. No surprises here, the Pentastar has become one of the industry’s most versatile and reliable midsize mills. The D478 six-speed manual transmission is standard fare (manual cog gearheads rejoice!), while the 850RE eight-speed automatic is an available option ($2,000). Gladiator won’t see the turbo-charged four-cylinder found in the JL, but Jeep states that next year we’ll see the 3.0L EcoDiesel. Transfer case options are the NV241 Command-Trac (Sport and Overland models) and the NV241OR Rock-Trac (Rubicon). Down below are Gen III Dana 44 axles fitted with 3.73:1 or 4.10:1 gears depending on model. As with its sibling the JL, the suspension is coil-sprung links with monotube gas shocks. Rubicon models host features we’ve grown to love: a 4:1 low-range transfer case, electronically actuated Tru-Lok differentials, disconnectable front sway bar, Fox shocks, and 33-inch Falken all-terrain tires.

Glancing at the Gladiator from the front it looks much like its brethren JL. But closer inspection reveals wider slots in the grille, as well as an 800-watt electric fan for improved cooling when needed. Under the paint are aluminum doors, hood and tailgate, another weight reduction measure. Mindful features include a three-position tailgate (damping mechanism in the hinge), roll-up tonneau cover, and 115V outlet in the bed. Up front is Jeep’s Trailcam, which allows you to preview the terrain directly in front of the bumper. Adhering to its historical roots, the doors and roof are removable and the windshield folds down to provide a full view of the trail. The entire process takes about 10 minutes using the provided in-tool kit. If you get caught topless in a rainstorm, no worries, the carpet can be removed for drying and the tub washed down. 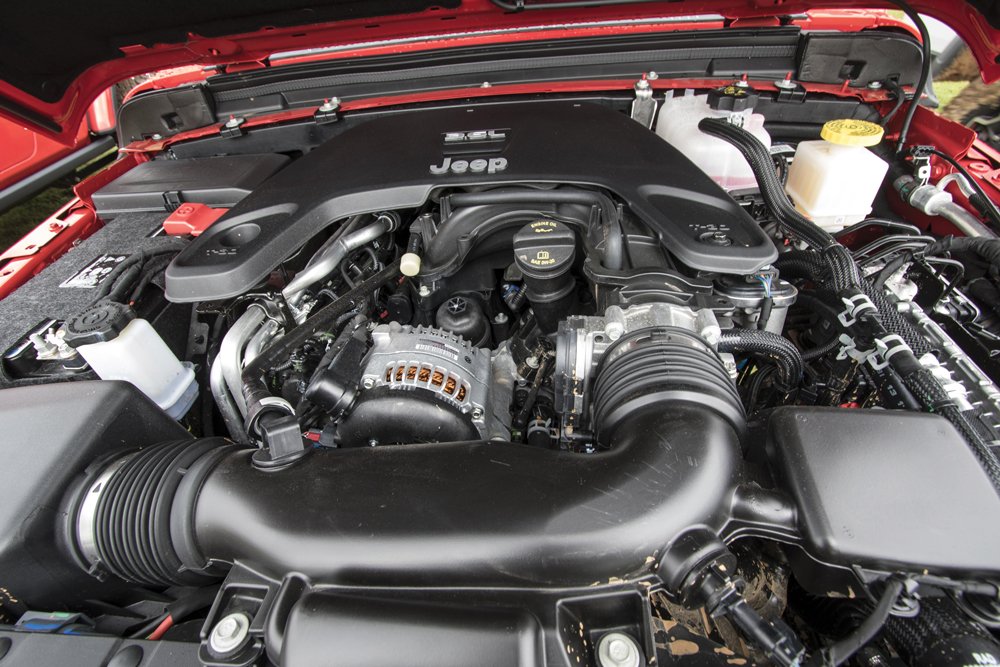 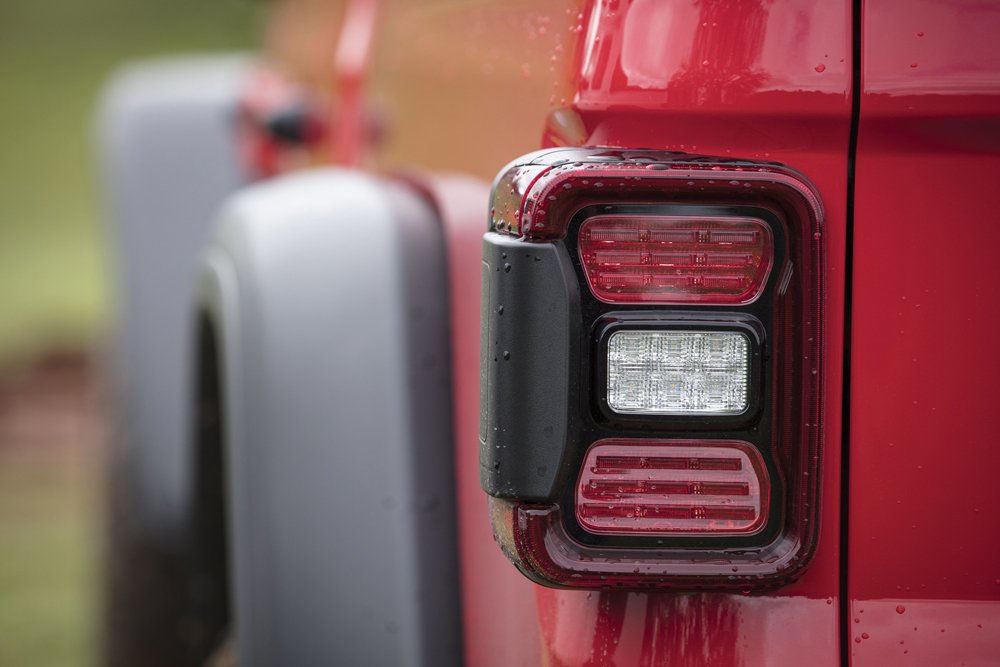 LED lighting can be found throughout.

The interior takes cues from several of the JT’s predecessors. The dash a shorter aspect ratio similar to an old Willy or CJ, yet instruments and controls are in full view and at arm’s reach of the driver. Via the fourth-generation Uconnect touchscreen (up to 8.4 inches) you can access SiriusXM, Android Auto, and Apple CarPlay, which will provide your favorite tunes in any quadrant of the planet. Siri, along with steering wheel controls, allows the driver to keep his or her eyes on the road and hands on the wheel. Another cool option is a grab-n-go Bluetooth speaker, and numerous USB and 12V ports are standard. Locker controls are out of the JL’s playbook—a toggle below the Uconnect screen allows for rear, front, or dual locker engagement. A single button turns everything off. 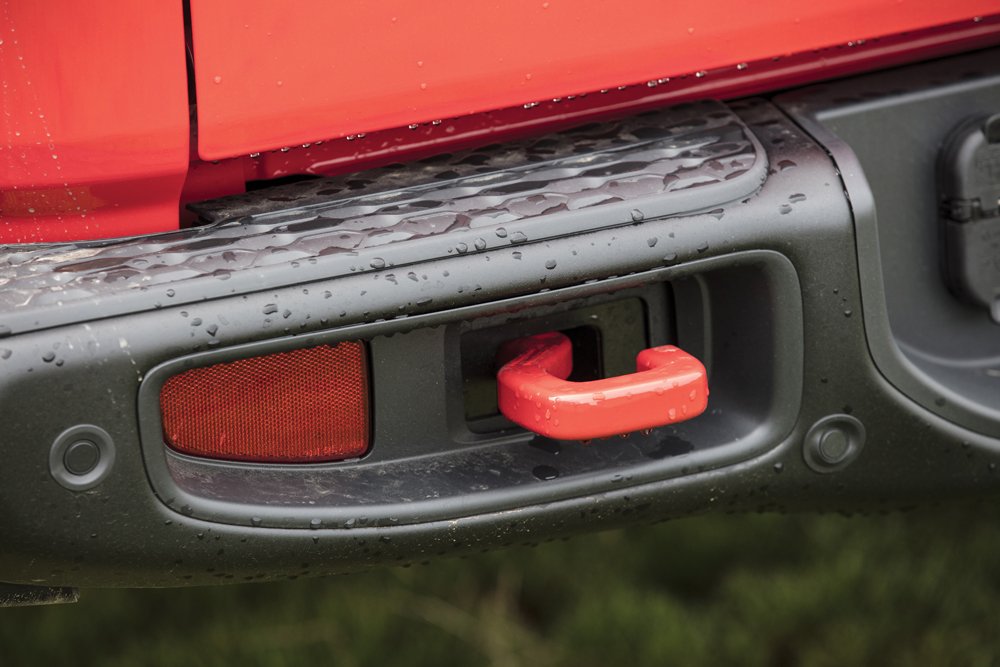 Proper recovery points can be found fore and aft. 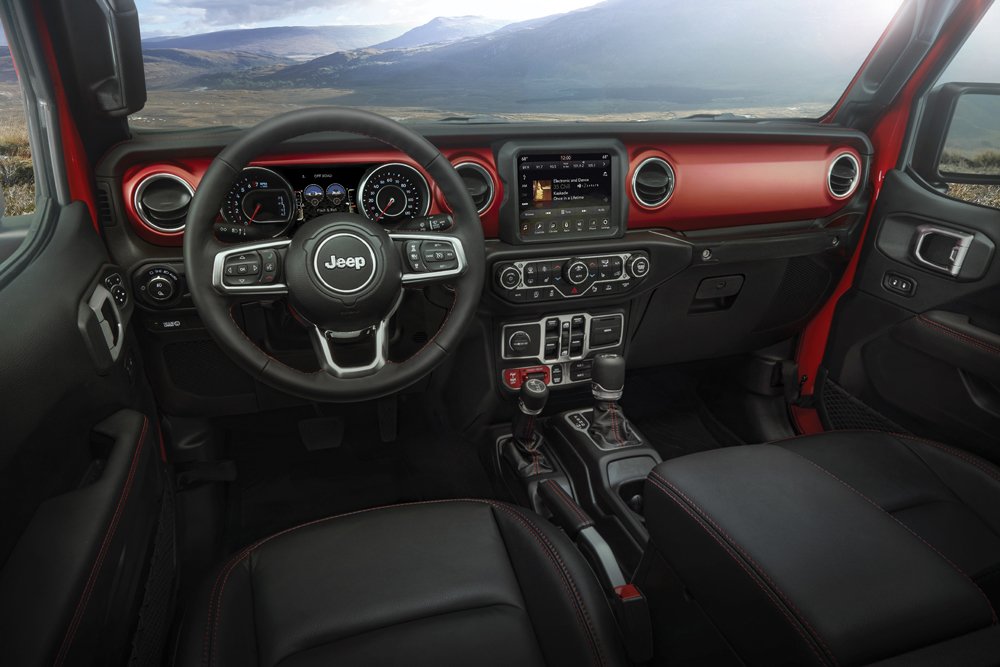 The Gladiator’s interior is reminiscent of a well-designed aircraft; instruments are in clear view and controls at arm’s reach.

Seats are sporty and comfortable, and the rear provides enough room for a fullsize adult. There is plenty of secure storage in the form of lockable compartments under the rear seat. The seat can be locked (with a key) in the up or down position to keep sticky fingers from accessing your gear when going topless. As with all new Jeeps, the Gladiator has engine start/stop (ESS), ABS, electronic stability control (ESC), blind-spot monitoring, a backup camera, adaptive cruise control, and a host of modern safety features.

On the Road and Trail

And now for the big question, how did this Jeep pickup do in real-world conditions? We spent three days with various Gladiators (Overland, Rubicon, and Max Tow models) in California’s Sierra. First impressions were that the extended wheelbase and upgraded suspension provided a stable and comfortable ride. Tracking on constant-radius corners was predictable, simulated emergency braking and lane changes did not turn our knuckles white, and in-cab noise levels (soft and hardtop models) were on par for a Wrangler. It is louder than its closed-cab competitors, but lest we forget that in 10 minutes we can take the top off and kick the windshield down.

“The team in Toledo knew that being competitive in the truck market would require, well, building a truck.” 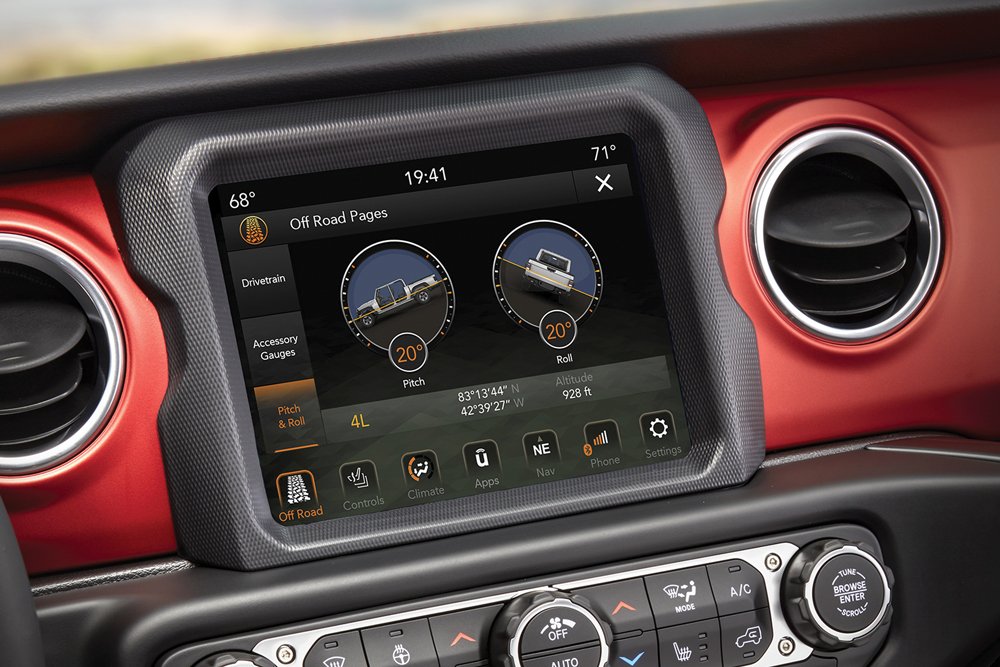 Engine vitals, front and rear cameras, and “off-road” modes can be viewed on the Uconnect touch-screen.

Diving into midsize truck territory, Jeep took it to task to ensure payload and towing capacities would best its 4WD competitors. The Gladiator’s stats come in at 1,600 and 7,650 pounds respectively. Heavy-duty progressive-rate coil springs manage the additional burden, and the links, track bar, and mounting system are straight from a Ram 1500. Brakes were also upgraded, now with 345 mm rotors outback and 330 mm discs up front. Generating 285 hp, the Pentastar V-6 is no slouch. In fact, it flat-out gets with the program. To evaluate the company’s towing capacity claims, we grabbed a Max Tow model with a 5,000-pound boat on the hitch. While we definitely knew it was back there—that amount of weight will wag the tail of just about any vehicle—the Pentastar took it in stride. 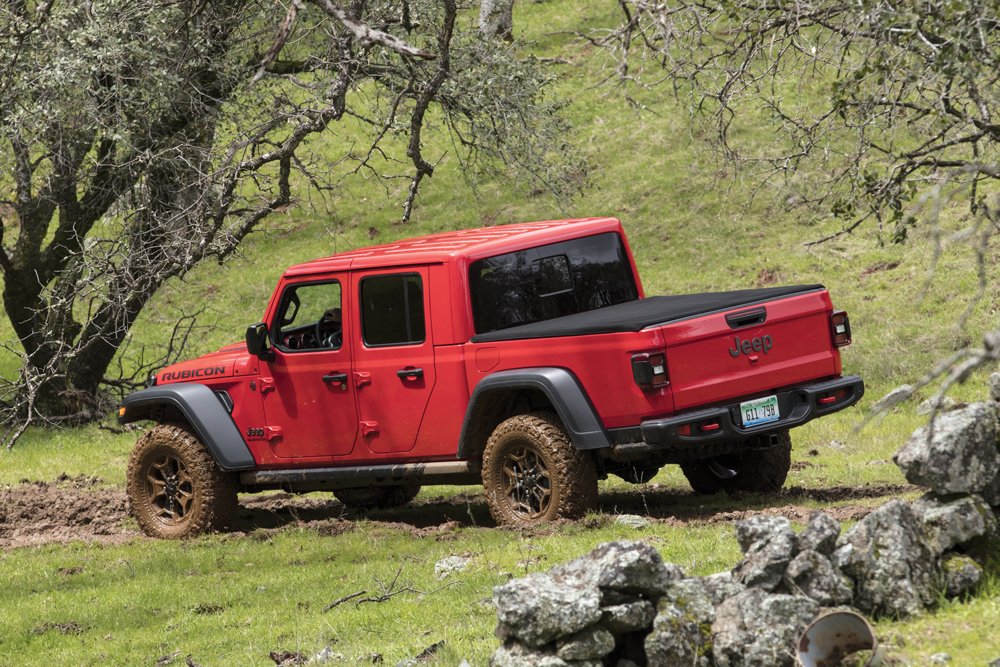 The 60-inch bed is wide enough to fit a couple of dirt bikes or a stack of plywood.

When it comes to technical terrain, the Wrangler still reigns. We spent a day in a Rubicon motoring through March mud and over rock-strewn obstacles in the Sierra Nevadas. When needed, toggling the lockers kept all four tires turning in unison, and the coil-link suspension did an admirable job of keeping them in contact with the tractive surface. While the solid front axle is not as cushy as its IFS rivals on the highway, this reviewer (who learned to drive on the Rubicon Trail) feels it is far superior than an independent suspension in cross-axle conditions. It also offers greater latitude with regard to raising ride height and other modifications.

We’ve heard comments that the longer wheelbase will hinder trail performance—approach, departure, and breakover angles land at 43/26/20.3 degrees respectively. The turning circle (44.5 feet) will take a bit more planning in close quarters, but benefits of having room behind the cab for a dirt bike far outweigh the additional effort. I do need to note that even with 11 inches of clearance, the reduced breakover angle put the skid pan in contact with the hard deck a few times. The Rubicon’s 4:1 transfer case provides a best-in-class crawl ratio of 84.2:1 (72:1 with the automatic). Although the Sport and Overland are not available with Tru-Lok differentials, I’ve driven JLs equipped with the Trac-Lok system over highly technical terrain and found it to work exceptionally well. 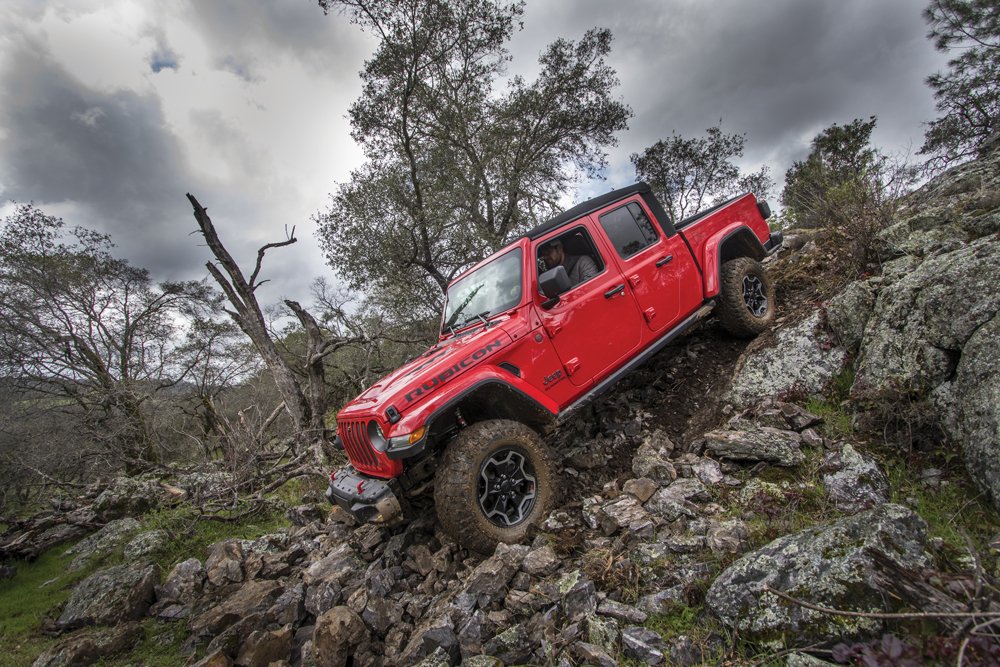 We’ve been waiting for years for Jeep to jump back into the pickup world. When they did, their focus was on capability and capacity. Capability was confirmed when they entered (and finished) a pre-production unit in one of the toughest races on the planet, King of the Hammers. Payload and towing capacities lead the field, and we love the fact that you can put a canopy and roof top tent out back. After three days behind the wheel, we’d say the Gladiator JT was worth the wait.