First Drive with the Comfortable and Capable Defender 110

There may not be another vehicle for overlanders as iconic and as storied as the Land Rover Defender. Its roots run back to the Land Rover Series vehicles beginning in 1948 to the debut of the first Defender in 1983. The history of this rugged and highly capable off-road utility vehicle from the U.K. is admired and respected, from military usage to the legendary Camel Trophy events. The Defender’s legacy grew as it reached the U.S. in 1993, where it was made available for a short four years before leaving the market due to advanced safety regulations. It was no surprise the announcement of the new Defender 110 generated plenty of excitement along with high-expectations from its off-road legacy.

Not The First Time Behind the Wheel

I first drove the new Defender during the 4XFar event earlier this year. It was a bit of a tease as it left me craving for more time behind the wheel. The initial driving experience was on a closed course meant to quickly and efficiently showcase the vehicle to hundreds of people over a weekend, which was simply not enough time to truly get a feel for one of the most exciting vehicles to enter the market.  When I received the invite to spend more time with the Defender, I jumped at the opportunity. 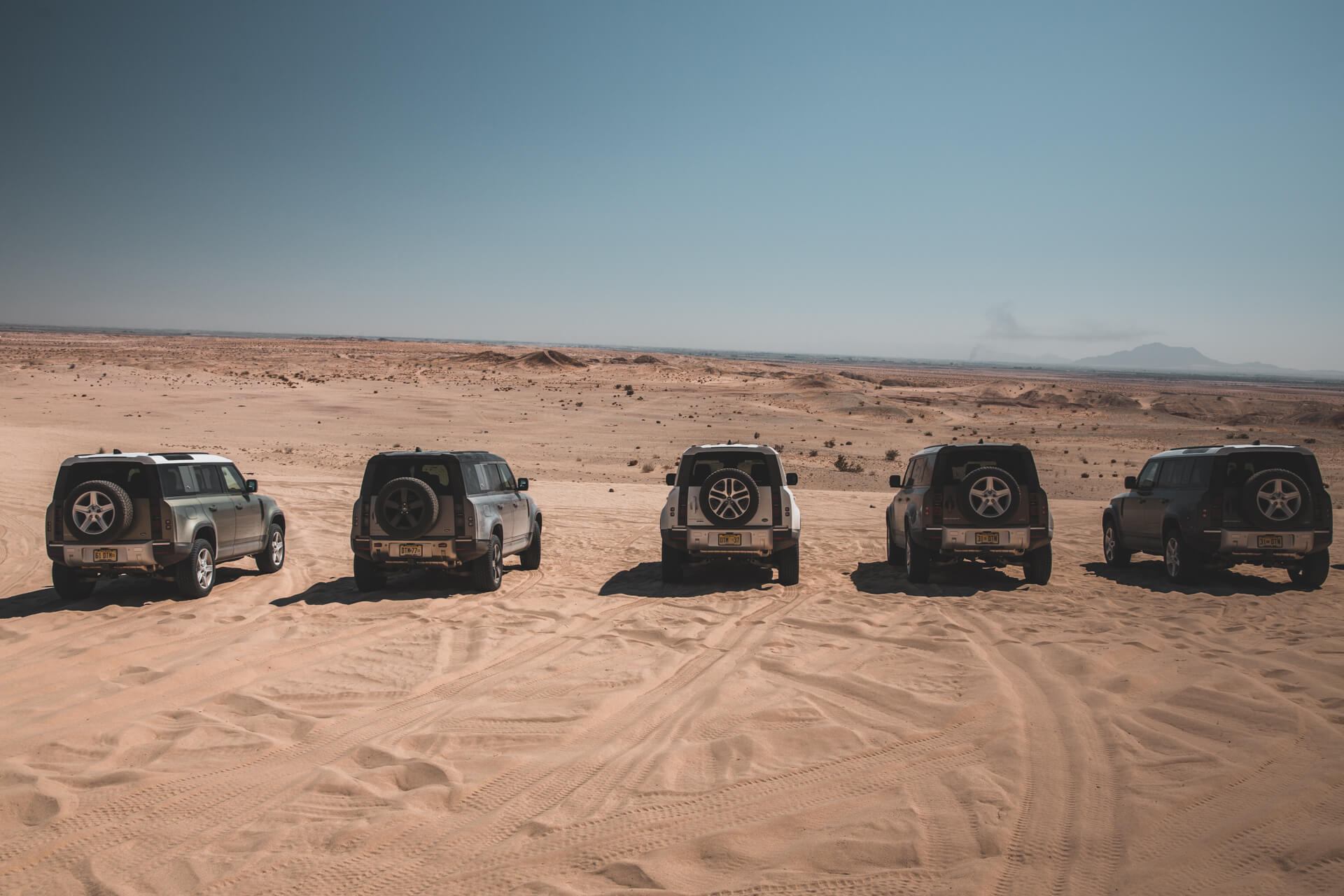 A beautiful Tasman Blue Defender 110 SE sat in the parking lot of the resort awaiting my arrival.  The blue gloss paint paired with a white roof and silver wheels pays homage to the classic 2-tone paint scheme that has become a signature for the marque. Upon first glance the Defender is striking with its bold and boxy body lines and rounded front end, but what I immediately noticed was the size. The 110 simply put is large. It’s longer than both the Wrangler and upcoming Bronco for reference. 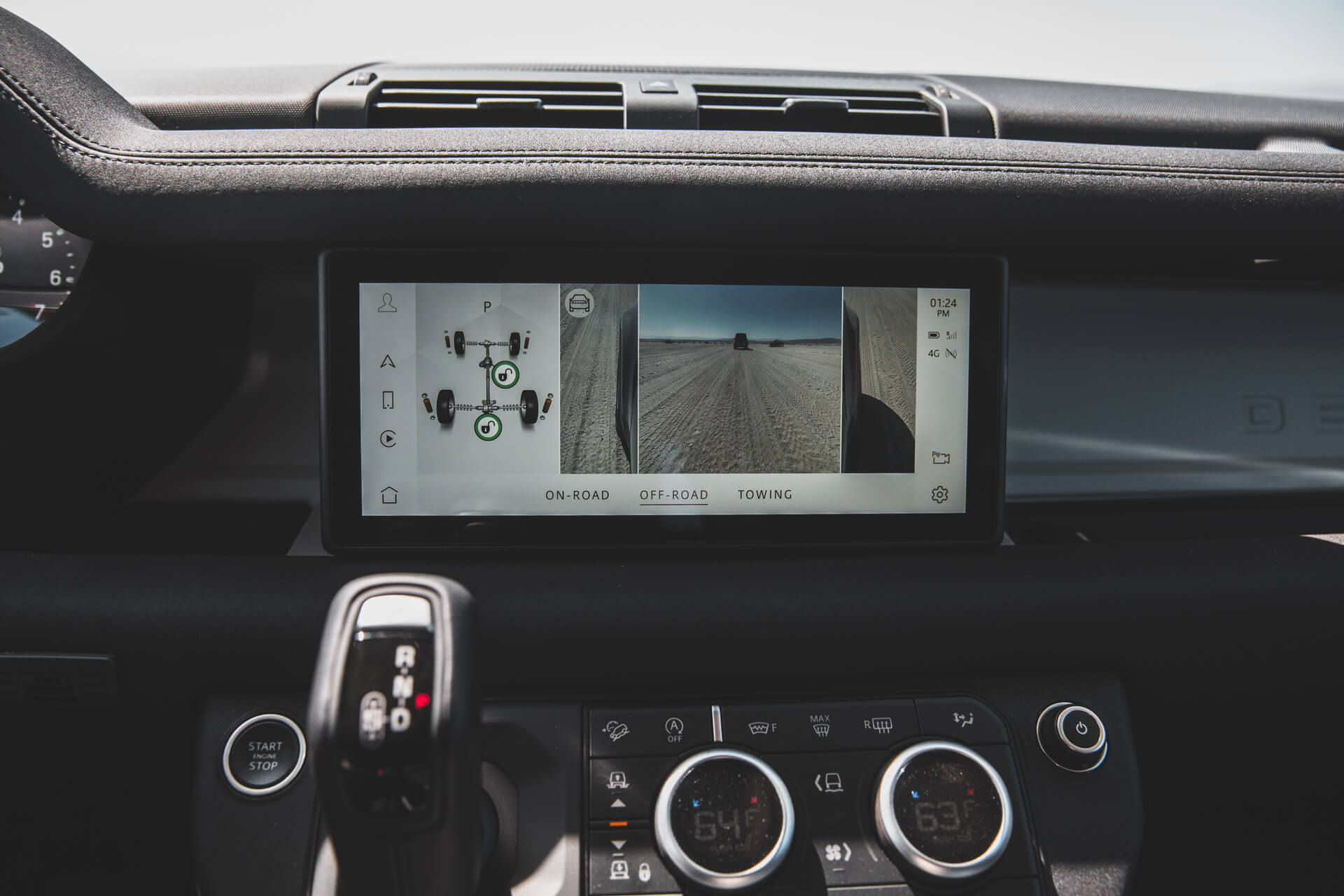 Inside the cabin is spacious and plush as you would expect from a Land Rover. The new Defender 110 incorporates all of the modern amenities that the previous model lacked. The incredibly comfortable and plush leather seats are equipped with both A/C and heat. And with the innovative infotainment system, you’d be hard pressed to guess you were sitting in an off-road capable vehicle. The cargo area felt ample enough just the essentials and in a pinch the seats lay flat to provide enough space for shelter to sleep overnight. Additional storage can be found by utilizing an optional roof rack to host everything from a full size spare tire to recovery gear. 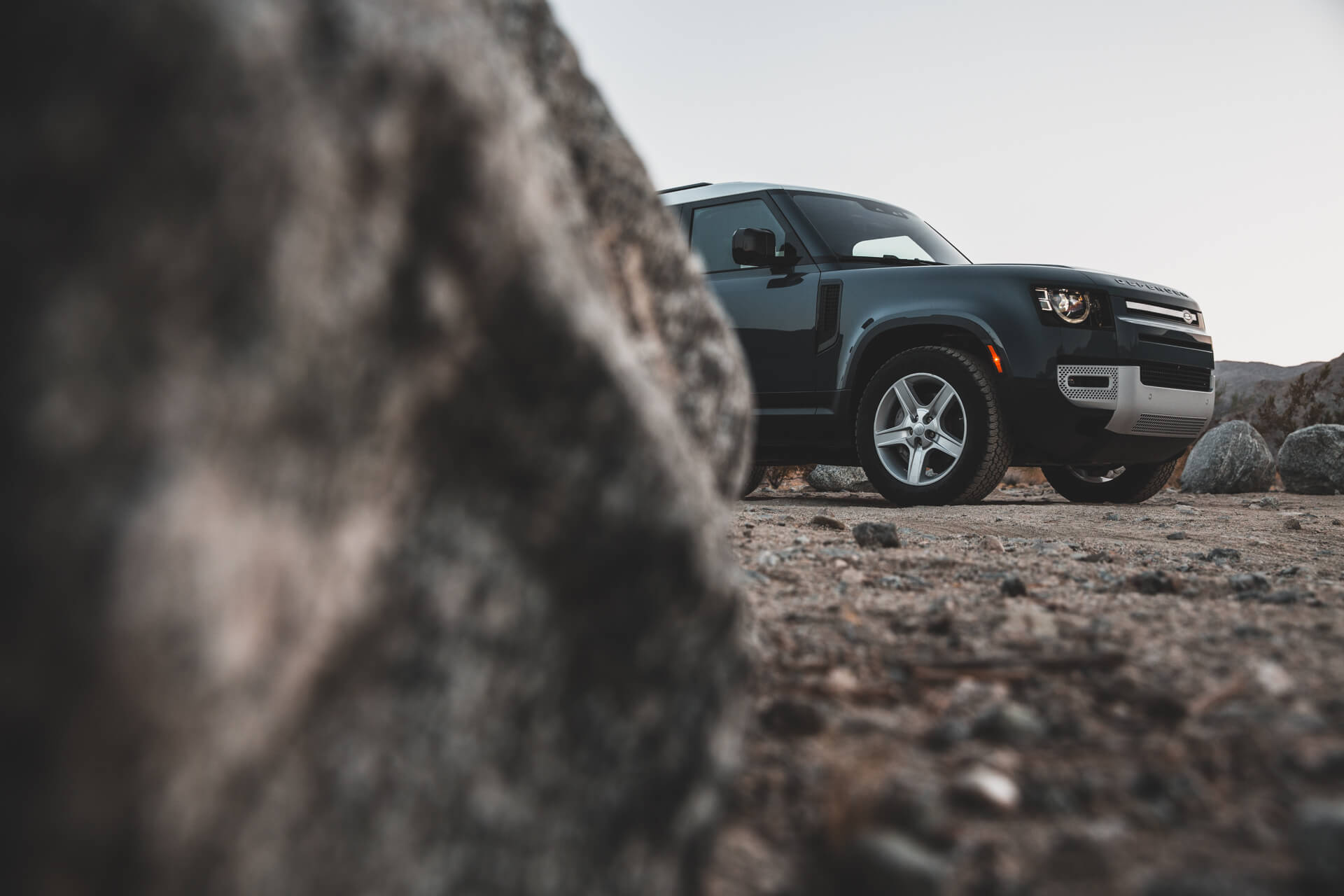 The most immediate and significant difference felt between the previous generations of Defender and the latest iteration comes down to the comfort.  The days of stiff suspension, lack of power steering, and loud, drafty cabins are now replaced with a refined and smooth ride, proper ergonomics, and practically every creature comfort imaginable. The workhorse, utilitarian vehicle has transformed into a modern all-terrain vehicle that can handle daily commutes and more strenuous excursions alike.

On the highway, the Defender SE is quick, easily reaching speed in a nimble amount of time due to the 3.0-liter inline-six that produces 395 horsepower and 406 pound-feet of torque. The steering is light making it easy to change lanes and maneuver the heavy machine.  Even at speed, the vehicle feels stable. This is all to be expected from the luxury automaker.
Now where the vehicle shines is off the pavement. We exited the highway onto a small unmarked and unpaved road.  Temperatures soared above 110-degrees and peaked close to the 125-degree mark through the hot Californian desert. Thankfully, the vehicle’s A/C system had no issues handling the heat as our convoy of Defender 110’s made our way through various landscapes of dirt and sand.
The Defender tested was well equipped with the Off-Road Pack that includes an electronic active differential and all-terrain tires along with the Advanced Off-Road Capability Pack, which allows for even more control and configurability. 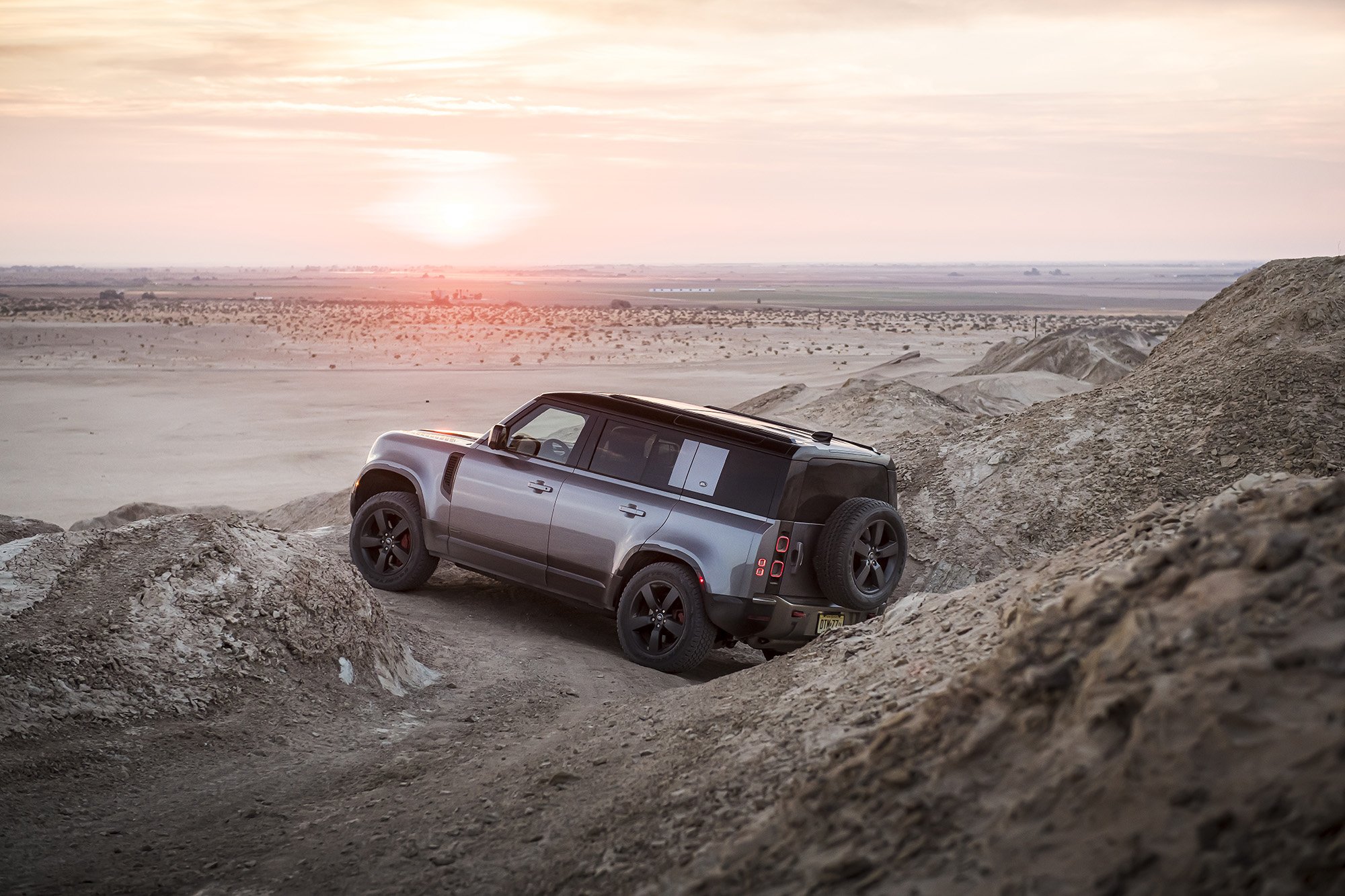 Off-Road Driving with the Defender 110

The first section brought us through lightly packed dirt, which was maintained and groomed making for a nice subtle transition before we reached a section of loose dirt and a few ruts. This provided the first chance to test out the vehicle’s Terrain Management system. Switching back and forth through the various modes from Sand, Gravel, and even Auto mode let the vehicle adapt to the environment.
Our group pulled up to an obstacle that would challenge the skill of the driver. It also put the vehicle’s off-road capabilities to the test. The first half of the obstacle required us to crawl on a ditch with a drop point. This forced a tire off the ground and in the air for a second as the suspension adjusted before dropping the airborne tire to the dirt. We then navigated through a tight path. This placed our driver side window a few inches from a wall of dirt. The backend was close to rubbing on the ground. This scenario was well planned by the design team, which took into account the vehicle’s approach, departure and break-over angle.
The rest of our journey consisted of varied terrain, while hitting speeds through a few sections. The vehicle’s suspension adjusted easily to the terrain. We then encountered a large and steep uphill ascent over a sand dune. It put the fully engaged sand mode to the test, as the vehicle needed every last bit of grip to make it over the crest. As we made our way through the sand with the scorching sun overhead, we came across one last sand dune. Here we would take a small ice cream break with the US / Mexico border in the horizon. The cold dessert was a nice treat before we got back into the driver seat to make our way back to the resort. 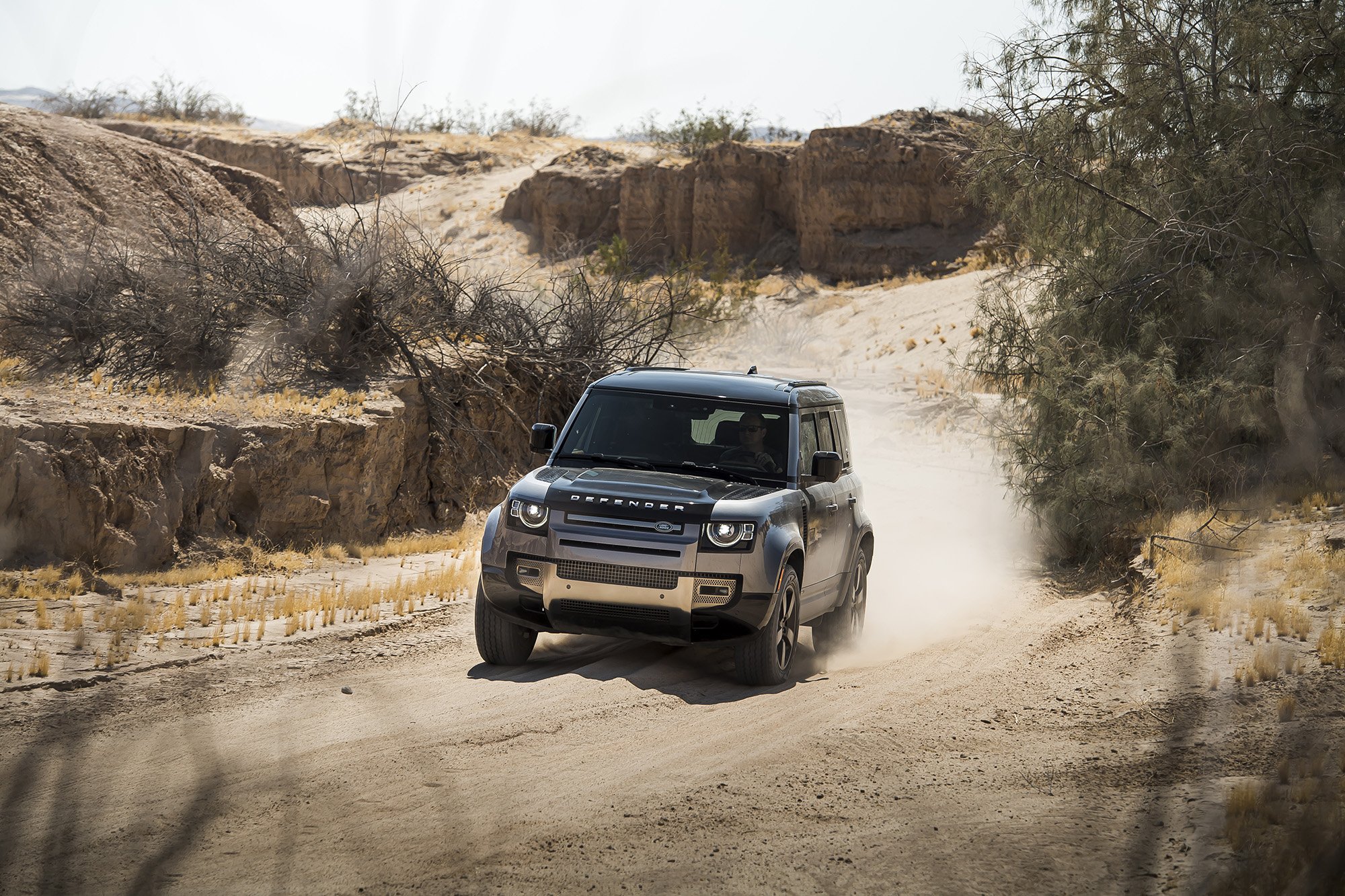 The new Defender already has a plethora of aftermarket parts available to further optimize the vehicle for the outdoors from roof top racks and tents to lighting and storage. It can easily be equipped with just a few accessories to be ready for just about any overland adventure. Lucky 8 based out of Buffalo, New York, show off their Defender 110 build in Tread January/February 2021.

Final Impressions of the Defender 110

Overall, the Defender is an all-new vehicle and completely different beast from the Defenders of the past so it’s difficult to compare the two.  The original was built for utility. The new model incorporates modern day technology and innovation for daily driving and longer-term excursions.  Dare I say it, the new Defender is a more capable and a whole lot more comfortable driving experience. The price tag (as tested was priced $71,025) may be the only thing making the Defender 110 more aspirational than obtainable. It was worth the wait and Land Rover has delivered a strong successor to the overland throne.