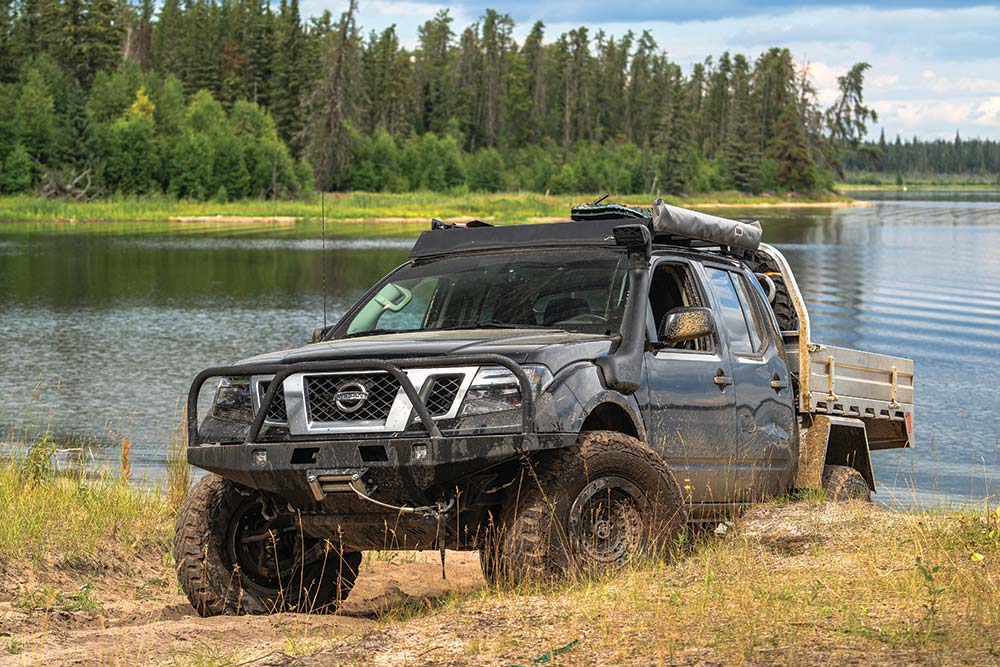 There are certain natural choices off-road enthusiasts flock to when building their off-road rig. The more popular the vehicle the easier it is to add parts and modifications to your checkout cart. But that isn’t the vibe Jason Spek was going for with his 2018 Nissan Frontier Pro-4X build. He wanted to build something truly unique embodying the rigs that inspired his love of off roading.

Why Build a Frontier?

Spek is a Corporal in the Royal Canadian Air Force currently in his 8th year of service out of Cold Lake, Alberta, Canada. His love of off roading and the idea behind the Nissan Frontier build had humble beginnings with some fellow military members. It all started with another automotive brand.

One look at the thing from any angle other than front and you will know that the best feature on Spek’s Frontier is the Summit Expedition Tray.

He would tell you he has been a car guy as far back as he can remember. Spek once owned a 2012 Ford Mustang and a 2016 Ford Focus. Neither were able to handle the snowy north around Cold Lake. For the snowy job at hand that would likely rear its head a few months of the year, he had purchased a 2019 Ford Ranger XLT with the dual purpose of daily driver and maybe towing a future weekend toy like a Foxbody Mustang. 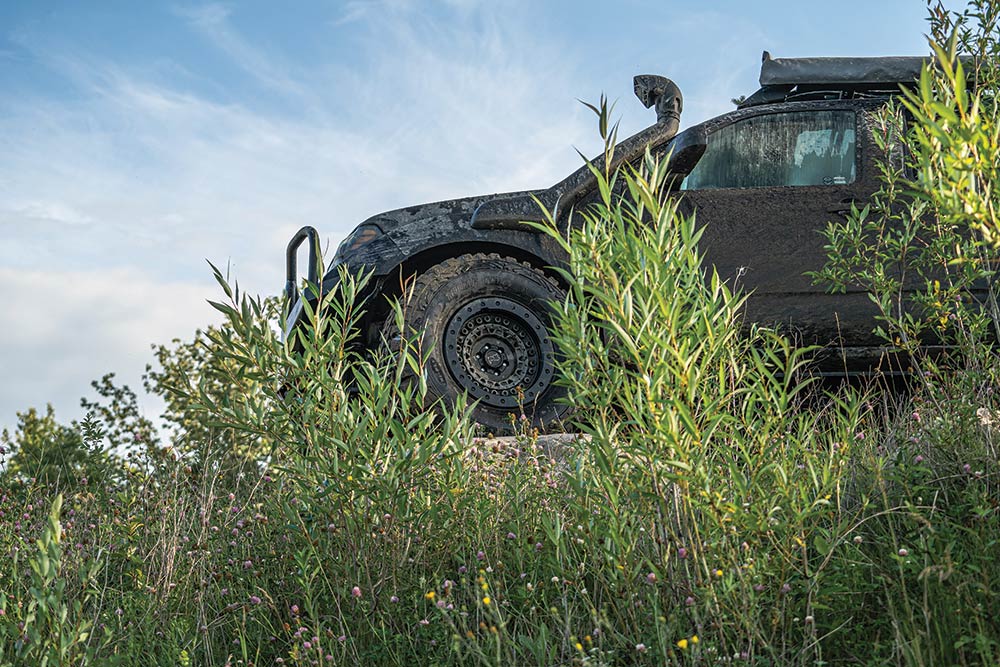 This Frontier was built to off road in the Canadian wilderness.

Into the Canadian Wilderness

He really got hooked on the overland off-road world after getting rides in some of his military friend’s rigs which featured some more off-road-oriented modifications. Sadly, the Ranger bit the dust in the way of an accident which freed up the ability to get another off-road capable vehicle.

Another one of Spek’s friends, Coburn, drove a built-up 2015 Nissan Xterra rig that was styled in all of the right places. Bigger tires on a smaller lift gave that rig the standoffish look he wanted in his next build. He opted for the Xterra’s mid-size truck cousin, the Frontier, and the build went from there.

He got the idea to give the truck a more Australian vibe after seeing the Nissan Navara builds overseas and set it apart from any other modified Frontiers.

“It’s been a blast hanging out with many military members including my good buddy Coburn. Most of the other folk have Jeeps so he and I have to really prove ourselves often,” says Spek.

As you can tell by looking at it, this Frontier was built for off-roading. Spek claims he tries to get outdoors and off-road in the mountains around him about every two weeks if he is off work and can afford the gas.

Playing in the dirt is in this Frontier’s DNA. It has seen some special places such as traversing the highest road in Canada located on Canoe Mountain, but the majority of its life has been spent making memories off the road, like when he spent a long weekend ping-ponging around Canada with his girlfriend and friends going from Banff to Canmore to Lake Louise to Hinton.

Spek claims he tries to get outdoors and off-road in the mountains around him about every two weeks if he is off work and can afford the gas.

Spek says, “Hinton is this wonderful little logging town on the outskirts of Jasper National Park in Alberta, there are trails all over the highway that will lead you to some incredible views of the mountains, the forests surrounding and the lakes as clear as the sky.” 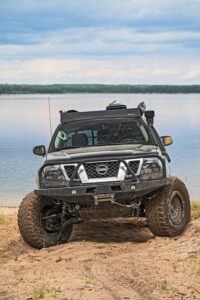 The truck is equipped with a Smittybilt XRC Gen 3 12,000lb steel cable winch for recovery needs.

From Hinton, Spek ended that particular trip with some mudding. Water coming in both doors and rooster tails of mud flinging into the truck is what he remembers.

“It was smelly, and wet, and awful, but we couldn’t stop smiling from how much fun we had,” says Spek.

Eventually, he aims to take it in the direction of a full camper setup. He wants to work with a camper builder in Canada to design a custom pop-up tent/canopy that will fit in his rear tray while allowing space for storage containers, a water reservoir, and even a bigger rooftop awning.

…all of that Titan underneath may give some insight in the future of the vehicle.

“I like being able to take the truck to the mountains where I am off road and decide on a whim when I want to camp in a location. I think it is fantastic,” says Spek. 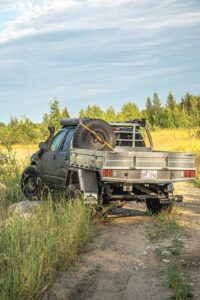 One look at the thing from any angle other than front and you will know that the best feature on Spek’s Frontier is the Summit Expedition Tray. He got the idea to give the truck a more Australian vibe after seeing the Nissan Navara builds overseas and set it apart from any other modified Frontiers. It looks so unique with it, but it fits so well as if it was some sort of weird factory work truck option.

Along with the eye-catching tray, the Black Rhino wheels wrapped in Procomp USA MT tires do the job, while everything underneath can be referred to as “Titan swapped”. Radflo 2.0 Titan swap coilovers with 650 lb springs, Z1 Offroad extended brake lines, SPC upper control arms, Dormman lower control arms, Z1 Offroad Titan swap axles and MOOG inner/outer tie rods. Will all of that Titan underneath give some insight in the future of the vehicle? 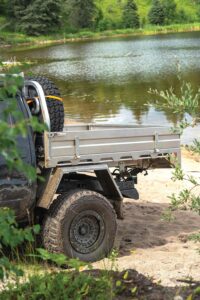 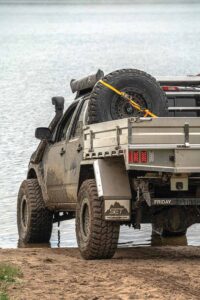 The Summit Expedition Tray gives this truck that Aussie look.

While it is already quite a unique vehicle in its current iteration, Spek is not done. There is a front differential off of a Nissan Titan sitting in his garage waiting for some 3.73 gears to show up and a front e-locker which is taking its time to get there too.

More uniquely in the Frontier’s future is a serious upgrade in the longevity between fuel stops. Spek was lucky to find a rare 38-gallon Long Range America fuel tank. Fuel tanks like it were originally designed for Frontier enthusiasts overseas. This means he is going to have to test some of his modification skills. While the fuel tank utilizes the stock fuel tank’s location, which is half the size of this replacement bad boy, some metal will have to get cut. An Ironman 4×4 snorkel protects the air box, while the RA Motorsports roof rack holds recovery boards and an ARB awning.

On the looks front, he has FiberwerX front fenders ready and queued up to get fitted on the Frontier, but you may have noticed that Ironman4x4 America snorkel popping out the side of the fender. He has to brainstorm a bit on just how the fenders are going to work with the snorkel, but when it is all said and done, he plans on painting the truck in old 1980 Nissan rally colors: blue, red, and white. Also, there might be a thought for a Titan V8 to go under the hood for an increase in horsepower and torque and to go along with all of the Titan-swapped suspension bits already on the rig.

He hopes to have most of these modifications completed by next spring, and once he does, he plans on taking the Frontier to some special trails. He is aiming for spring because he is potentially joining a group that is heading to Moab then and another which wants to tour the Canadian side of the Rockies later that year in 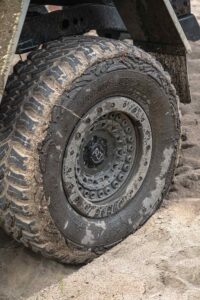 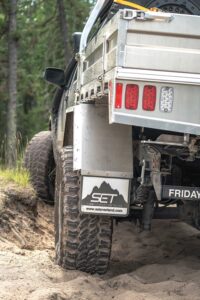 The Frontier stands out amongst the green landscape.

A standout in the grass, the truck moves with ease. (Photo: Marcus Quiban) 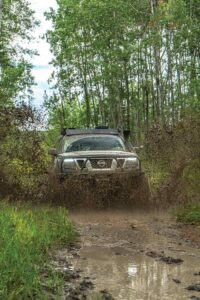 Running through mud puddles is in this Nissan’s DNA. 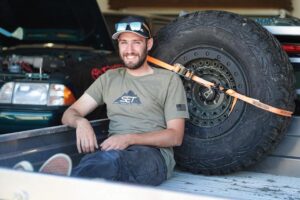 Owner Jason Spek takes a moment to relax in the bed of his Frontier at a local car show.

Editor’s Note: This story was originally published in the November/December 2022 issue of Tread Magazine.