→ Submit your rig and win a Tread magazine feature of your truck! ←
Get the Magazine
Features, Modifications, SUVs, Vehicles
Story by Ashley Giordano
Photos by Richard Giordano 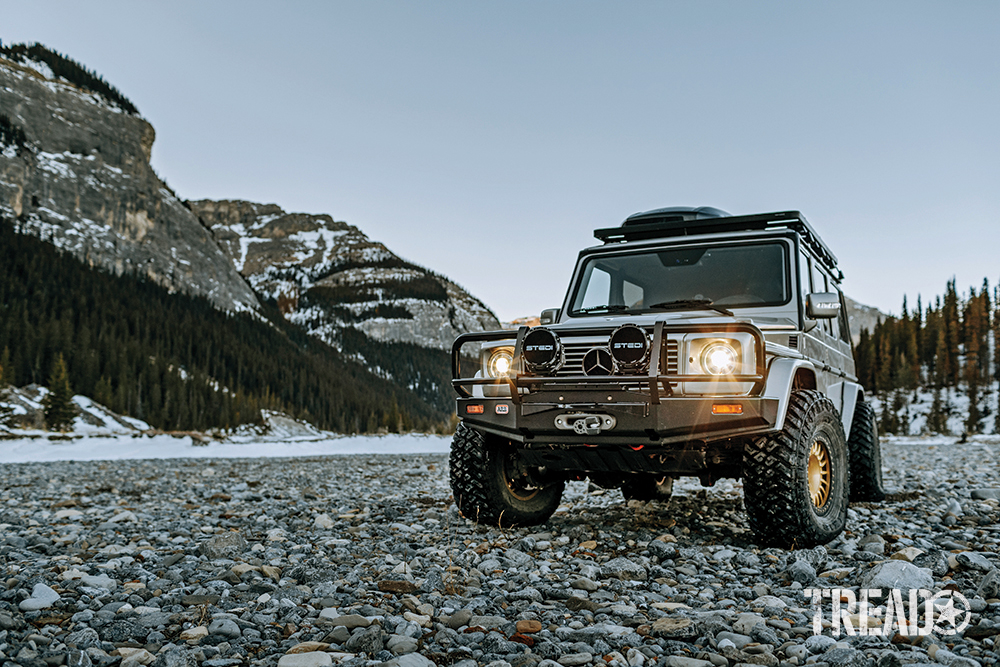 There’s a scene in the 1985 blockbuster, Back to the Future, where Marty McFly (played by Michael J. Fox) spots a 1985 Toyota SR-5 4×4 pickup strapped to the back of a flatbed truck. It’s tricked out with tube bumpers, a roll cage, KC halogen lights, radial tires and the signature Toyota 4WD mud flaps. Marty’s eyes glaze over. “Check out that 4×4,” he says. “That is hot!” 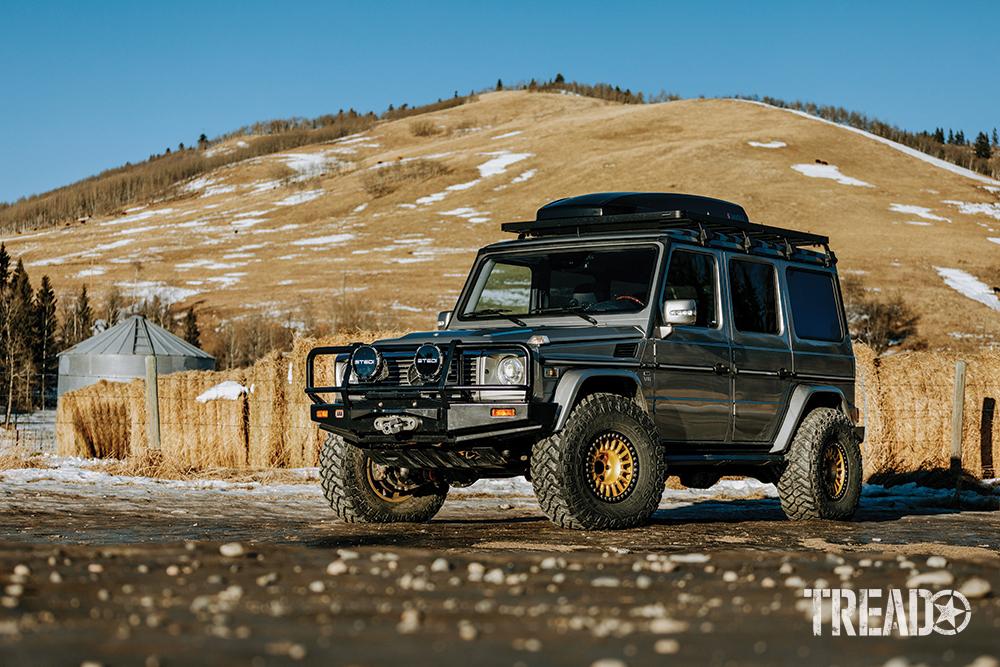 Nathan applied what he’s learned from his experience with past Toyota builds to his latest passion project—a 2004 Mercedes AMG G55 G-Wagen.

This 1985 Toyota Pickup was a dream truck for many 1980s kids—including Nathan Hayashi. Nathan purchased his first truck, a beat-up 1981 Toyota pickup, back in his college days to tackle the commute between Lethbridge, Alberta, and Fernie, British Columbia.

“I bought it because of Back to the Future,” he says, laughing. “I thought, ‘A Toyota pickup; that’s a cool thing to get!’ The truck was super cheap … and immediately broke down. I didn’t know what I was looking for when I bought it; it just looked cool.” 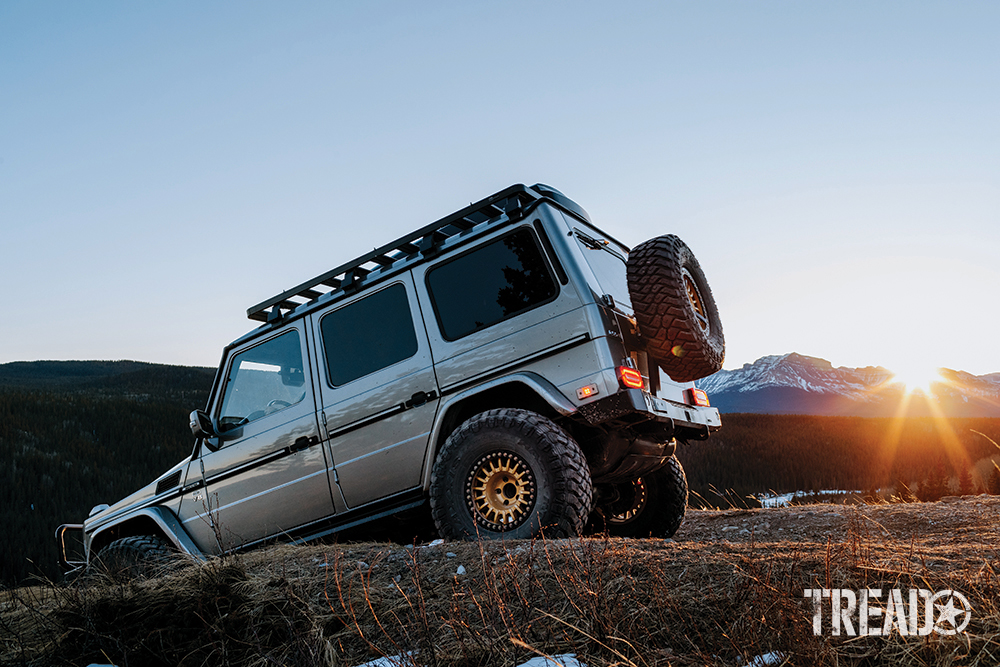 Shortly thereafter, a buddy invited Nathan to try off-roading for the first time—in the nearby Rocky Mountains. The area became a makeshift outdoor mechanic’s “classroom,” because Nathan spent many hours tinkering and repairing the temperamental 4×4 when it broke down (which was often).

“I learned a lot from fixing the truck,” he says. “I built it up quite a bit and started going ski touring or up mountain peaks to go skiing and camping.”

He continued to learn what he could from copies of Four Wheeler Magazine, forums such as Pirate 4×4, 4×4 Wire, the Marlin Crawler bulletin board and by watching Ultimate Adventure on VHS. But the real learning came from being out on the trail. 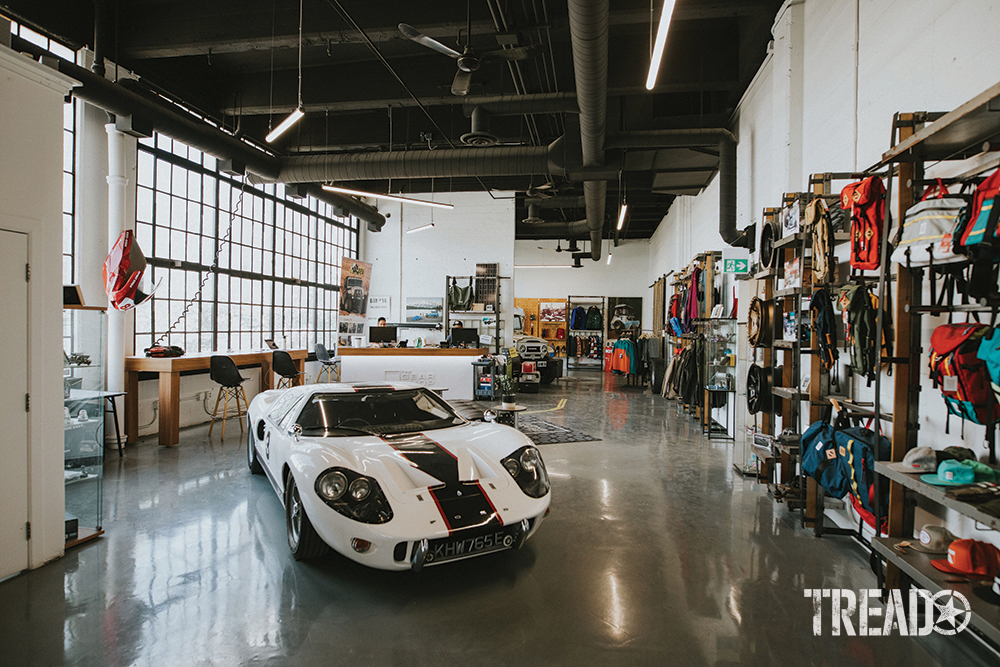 The Gear Shop lobby wouldn’t be complete without this Ford GT40! 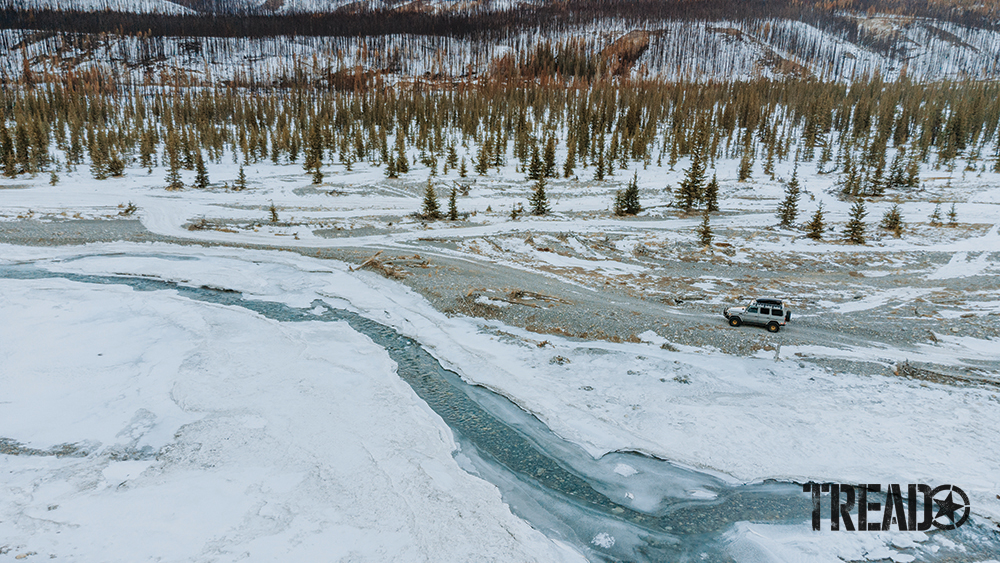 Nathan’s favorite playground in the Canadian Rockies comprises recreation areas such as McLean Creek and Waiparous.

Nathan now owns The Gear Shop, one of Calgary’s premier off-road and performance shops. Its vision is to support the needs of those who believe four wheels transcend simple transportation. 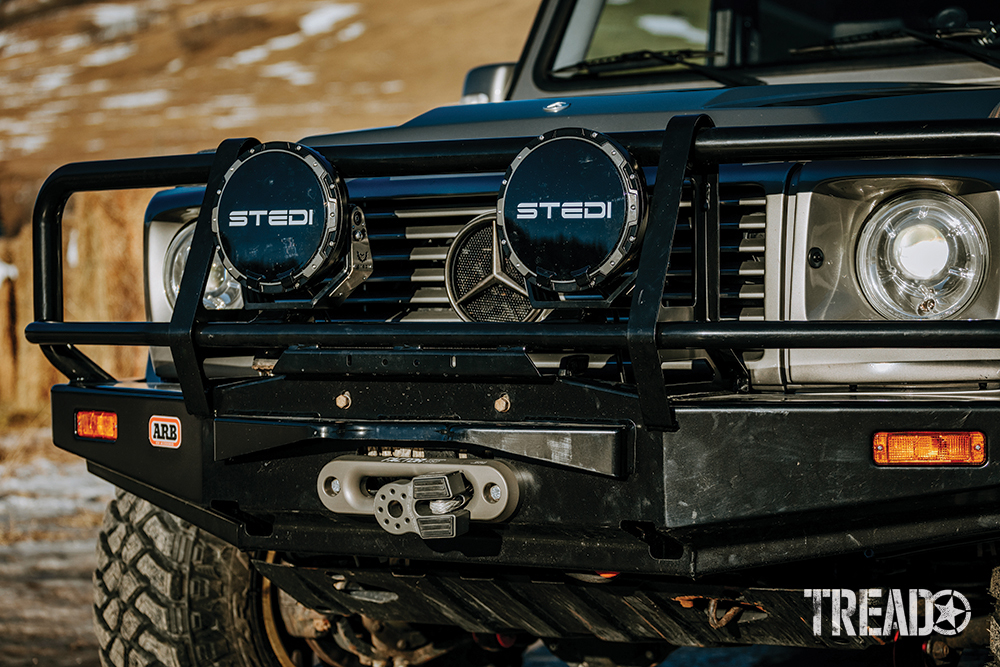 Nathan and his team at The Gear Shop designed and constructed custom rock sliders and 70 Series Land Cruiser ARB bumper adapter brackets for the G-Wagen platform. 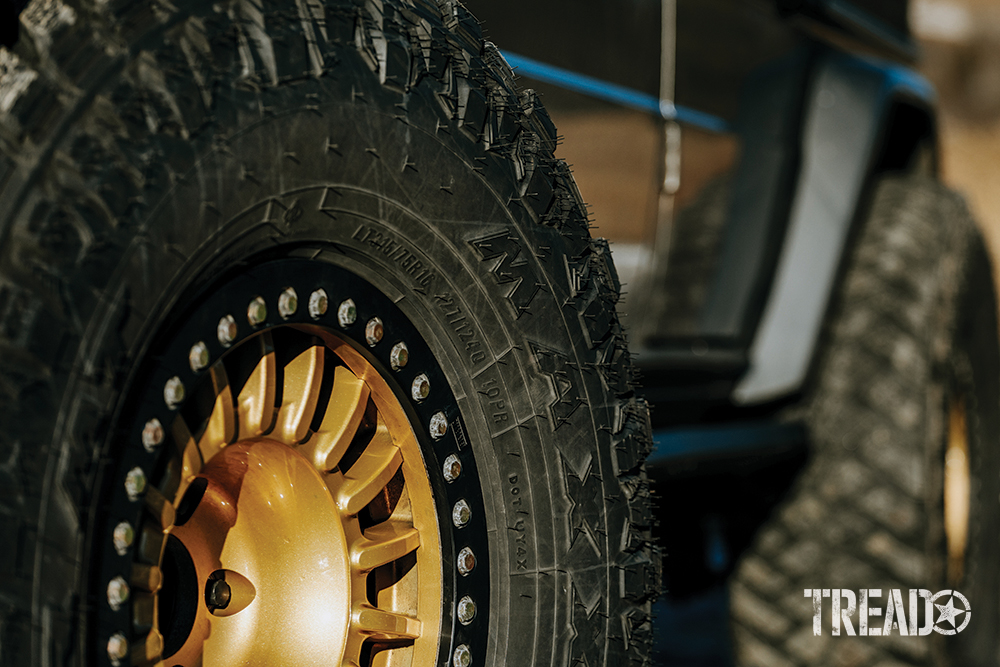 As a result of his background with CT4WD, Nathan initially specialized in Toyota long-travel builds. However, as the shop started to grow, his team began working on a variety of different vehicles—from Volkswagens to Raptors. 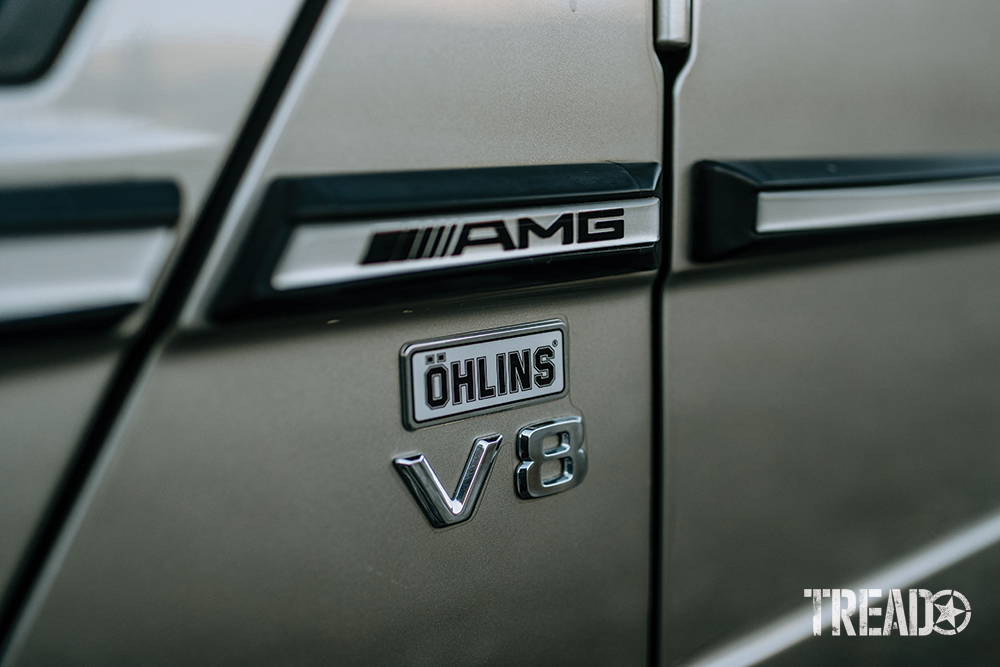 This build is equipped with Öhlins MEV front and rear reservoir shocks. Nathan is working with the company to manufacture custom shock lengths for more droop. 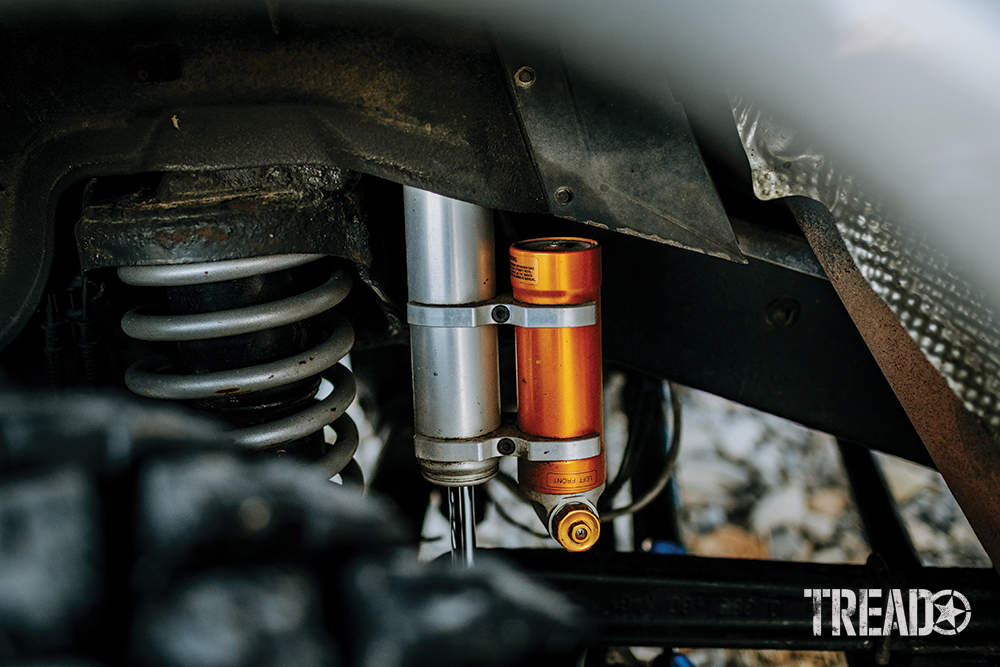 “The concept among all these vehicles is very similar if the goals are the same,” Nathan explains. “If someone wants to go camping, we can use very similar approaches while still understanding the intricacies of each brand.” 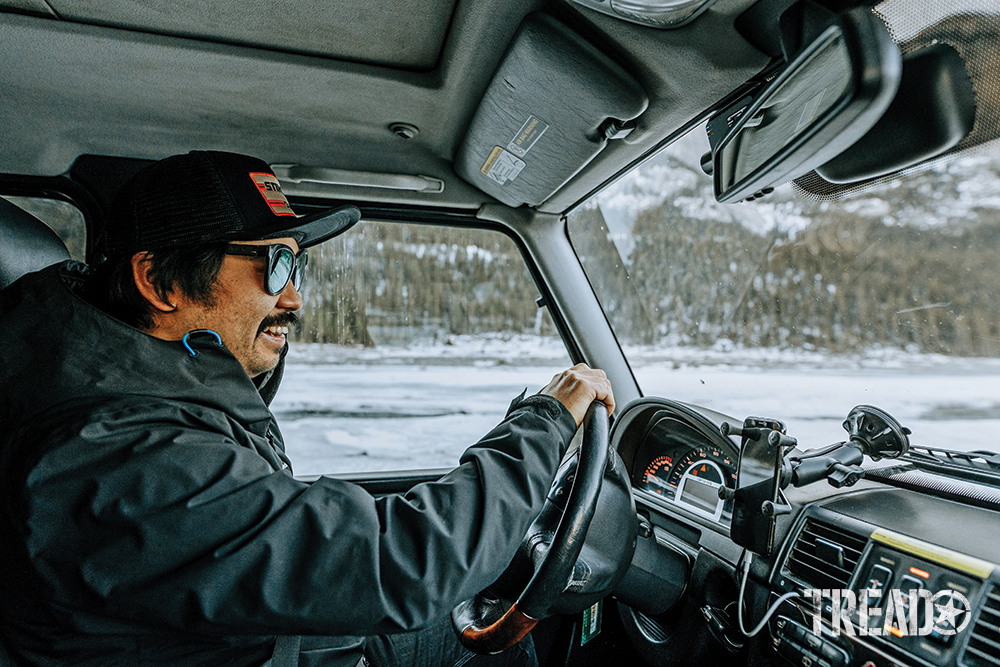 Nathan is applying his experience with past Toyota builds to his latest passion project: a 2004 Mercedes AMG G55 G-Wagen.

It was 2019, and Nathan was between vehicles, finding it difficult to replace his previous adventure mobile—a fourth-generation 4Runner with long travel suspension, lockers, sliders and 35-inch Maxxis Razr tires wrapped around OMF beadlock-converted Rays TE37 wheels.

A friend’s G-Wagen, up on a hoist at the shop one day, caught Nathan’s eye.

My vision for the future of 4WD involves vehicles that can do it all … Go on an expedition, crawl the rocks, hit gravel roads at high speed, hit the dunes, snow wheel and drive logging trails such as McLean Creek and Waiparous … but also raise a few eyebrows doing it!

“I looked underneath and thought, ‘This is nuts! This thing is built for off-road.’ Everything was tucked above the frame rail; the axles were larger than expected; and the birfields were massive when compared to a Toyota pickup. The thought that went into the truck was just mind-blowing!”

This was the first time Nathan saw a G-Wagen up close, and the Mercedes was new territory for him. 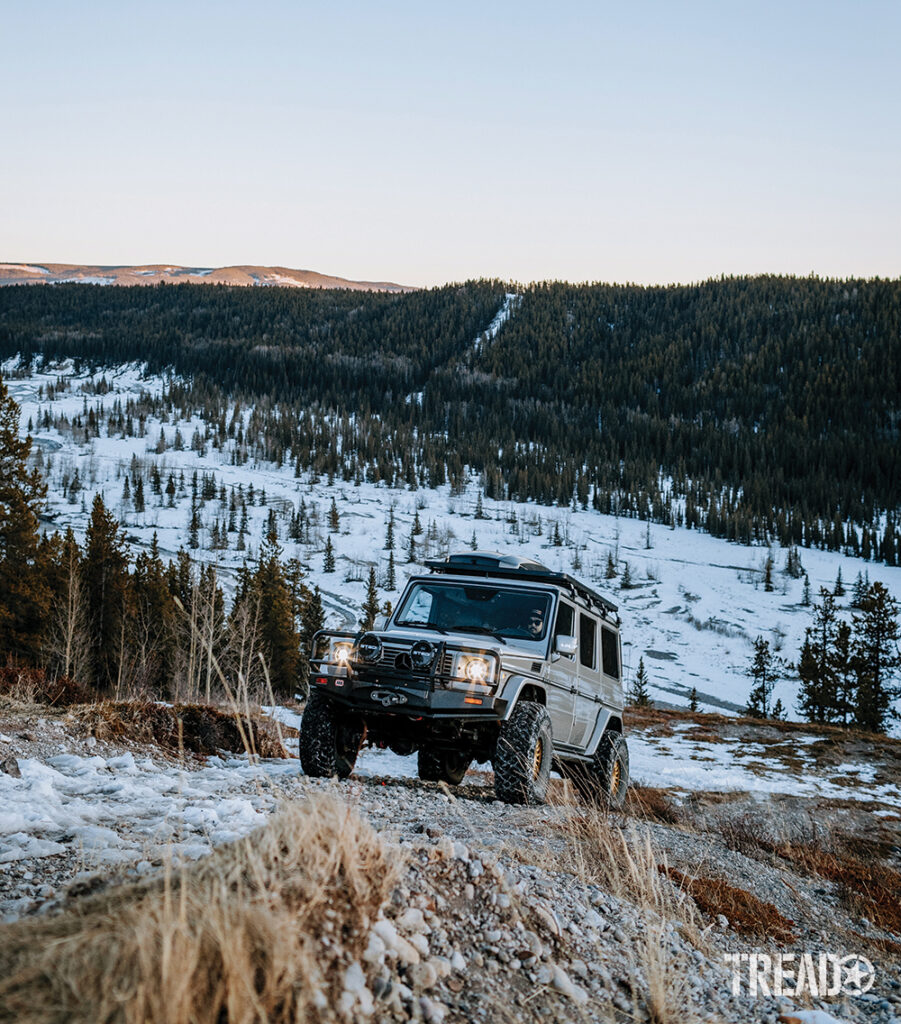 “I thought, ‘Well, let me see what this is all about.’ There was a solid axle in the front, but I was really used to drifting my truck. How would this thing drive?” (Really well, apparently.)

A listing in Saskatchewan proved fruitful, and Nathan and his 350hp G-Wagen had a “very spirited” drive home. He recalls, “I was mind-blown about how this ‘tissue box’ could cut through wind at proper speed.”

The G-Wagen platform met Nathan’s need for speed and tight corners from his competitive motorcycle racing days. It also offered The Gear Shop an opportunity for innovation.

“We were looking to open ourselves up, because the Toyota market is so saturated,” Nathan explains. “What could we do to innovate again? Why not put 35s on, get some long travel going and make this thing into the ultimate camping and off-road vehicle. It could still rip down the highway comfortably. We could apply a lot of the things we’d learned to a whole, new market.”

Education precedes innovation, so Nathan and his team dug into the G-Wagen platform, both on the trail and off. This luxury SUV proved itself off-road. It made quick and confident work of climbing obstacles or loose shale. It also flew over gravel roads with impressive control and stability. The G-Wagen’s wheelbase, being shorter than that of a Tacoma but longer than that of a 4Runner, made for a very stable crawling platform. The vehicle’s short overhangs and large greenhouse space reminded Nathan of his 1981 mini truck. He was impressed.

As with any vehicle platform, the G-Wagen isn’t without its challenges. For one, components are quite expensive and can be difficult to track down, while the CANBUS (Controller Area Network) electrical system can be daunting for those used to the simple wiring systems of the Toyota world.

Sometimes, the right product for the job needs to be shipped from overseas. The Portugal-built AFN rear bumper fits the purposes and esthetic of this luxury SUV/off-road build.

“You do need to carry around some electrical diagnostics and a STAR computer with you if you’re really in the middle of nowhere,” Nathan explains.

However, if the whopping, $131,000-plus price tag of a brand-spanking-new Mercedes G-Class base model isn’t for you, consider buying used.

The upfront cost is higher (the G-Wagen is equipped with three locking differentials in the front, center and rear.). However, the build cost is usually much lower than that of the popular Toyota models.

“Even with coil springs, shocks and a steering damper, we’ve seen G-Wagen builds come in at half the cost of a 4Runner, Tacoma or FJ Cruiser with long travel and lockers,” Nathan notes. “You only really need to spend $10,000 on a G-Wagen to achieve similar performance as a fully built-out, $75,000-to-$80,000 Toyota truck.”

This luxury SUV proved itself off-road, making quick and confident work of climbing obstacles or loose shale while also being able to fly over gravel roads with impressive control and stability.

“We also had Viking Performance send some coil springs that will hold the weight better. We’re weighing down the truck a little bit,” Nathan explains. “Other ideas we’re going to employ from our rock crawler days might also help out this platform.” 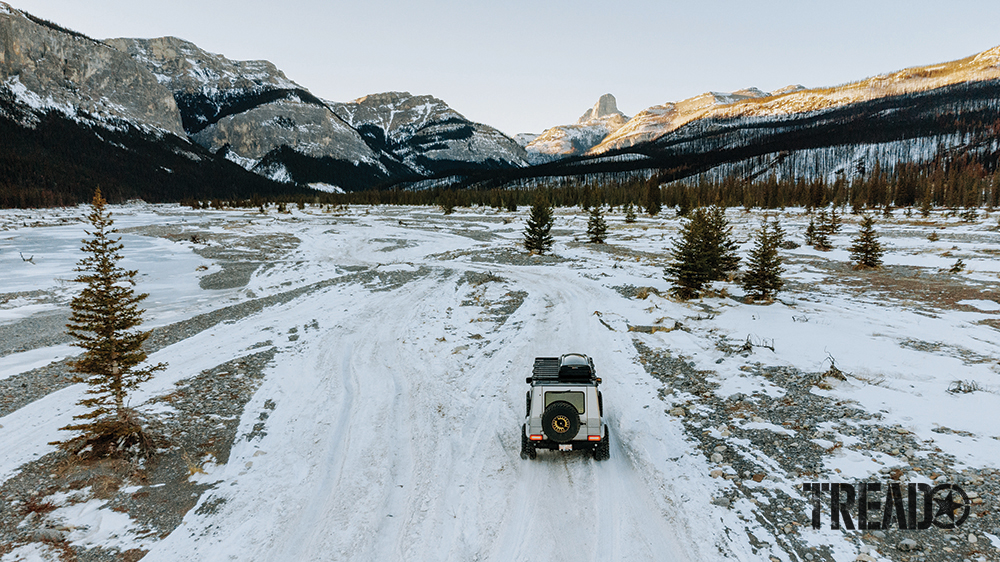 Platforms will always change. Nathan is building on the fundamentals he’s learned from the past. He has an eye toward the future. Gasoline “runs through his veins.” The ability to design, build and prototype new products directly transfers to new and innovative platforms. This includes the Rivian R1T, which will be a part of The Gear Shop’s focus in the near future.

“My vision for the future of 4WD involves vehicles that can do it all,” he explains. “Go on an expedition, crawl the rocks, hit gravel roads at high speed, hit the dunes, snow wheel and drive logging trails such as McLean Creek and Waiparous … but also raise a few eyebrows doing it!”