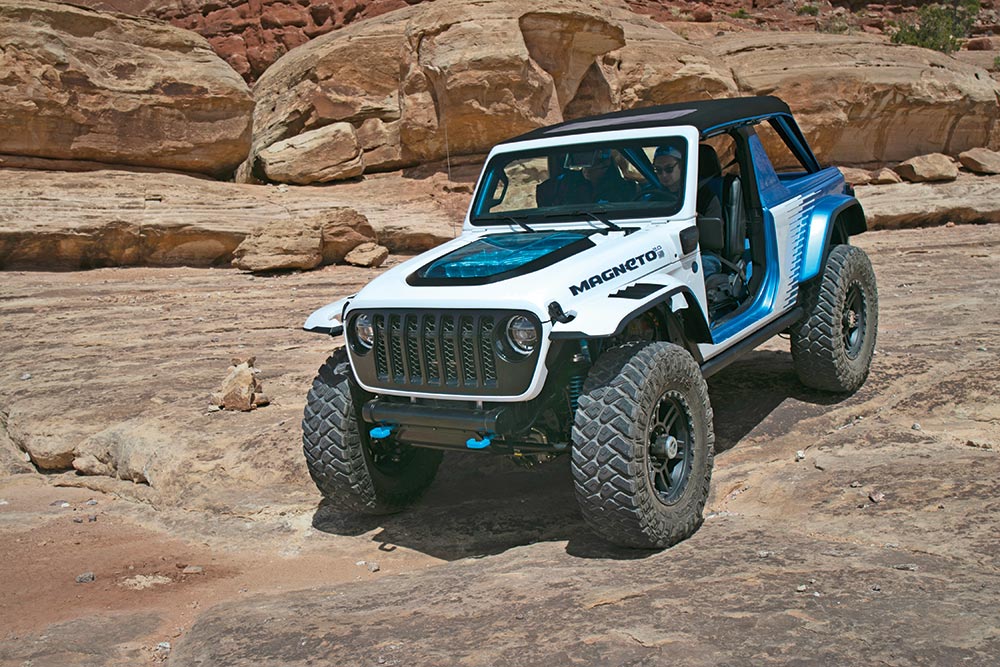 When we think of Moab’s Easter Jeep Safari, we think of Jeeps—and tons of them. What people may not immediately imagine, however, are the unique Jeep concept vehicles that roll into the public’s view for the first time during the event.

For over 80 years, Jeep has manufactured cool and capable 4×4 vehicles. This past year was no exception. The off-road giant’s trek towards electrification was evident, with five of the 10 total concepts electrified. Here, we’ll look at four of our concept favorites. 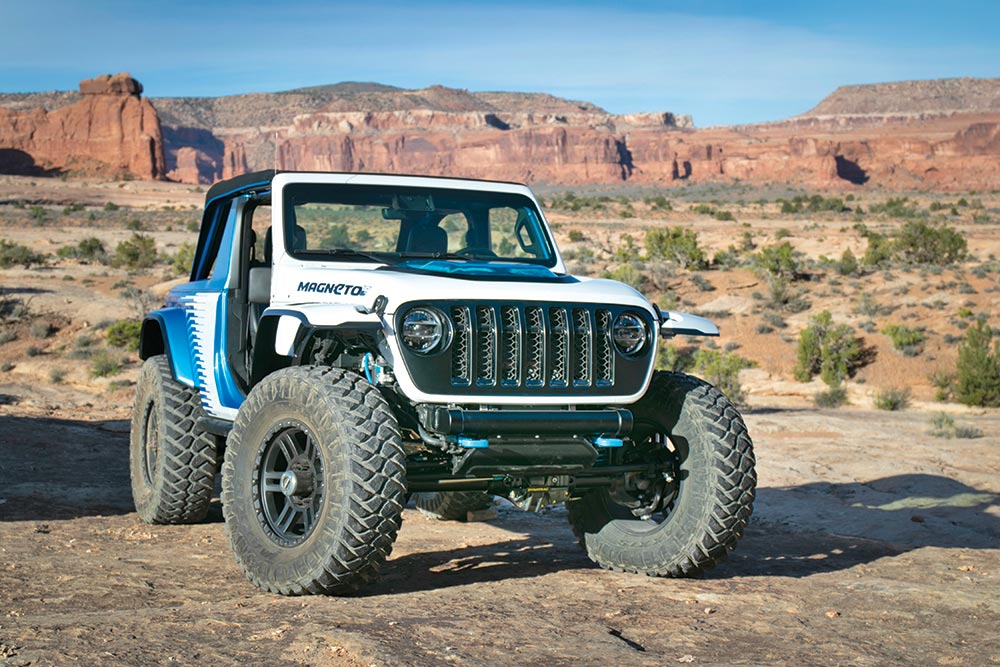 After a smashing success with last year’s first full-EV concept debut, Jeep pushed the electrified envelope with an improved all-electric 4×4: Magneto 2.0.  Jeep built Magneto 2.0 as an open laboratory to study the mannerisms of all-electric off-roading vehicles and as a gateway towards their quest for Zero Emissions Freedom. Jeep ran with Magneto’s initial design but enhanced its capability, technology and power.

Same as last year, Magneto 2.0 showcases a six-speed manual transmission. Although the 2022 rendition echoes a similar Surf Blue paint scheme and overall vibe, this two-door Wrangler is very different. It was stretched 12 inches to accommodate beefy 40-inch Maxxis Razr mud-terrains and 20-inch wheels. Double-locked Dynatrac 60 Pro-Rock front and Dynatrac 80 Pro-Rock rear axles utilize a 5.38:1 gear ratio. Jeep changed the first gear in Magneto 2.0’s manual transmission from 5.13 to 3.36, showcasing an incredible amount of torque, to allow for “true, one-pedal driving,” even in tricky terrain. Although last year’s Magneto had a solid hood without hood scoop, this year’s iteration features a massive blue-hued see-through window, drawing attention to the EV technology directly beneath it.

Magneto 2.0’s highest amperage is over double that of last year’s version, coming in at 600 amps. Same as with other all-electric vehicles, the Magneto 2.0 EV creates instant power. It pushes an impressive 625 hp and up to 850 lb.-ft. of torque. Magneto 2.0 more than doubles its horsepower and triples the torque from last year’s initial all-electric offering. Although we couldn’t try this during our time with it, Magneto 2.0 apparently claims a 0-60 miles per hour acceleration in only two seconds. We say yes, please. 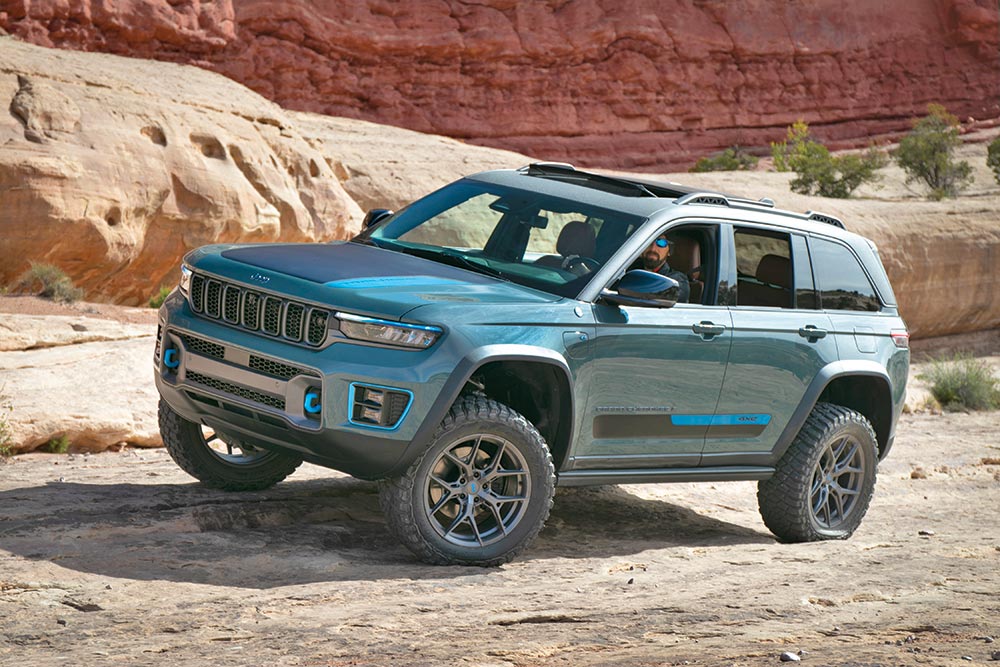 Four LED fog lamps are mounted within custom bezels, adding a bit of flair to the front of the 2022 Jeep Grand Cherokee 4xe concept vehicle.

Jeep showcased five electrified concept vehicles during the 2022 Easter Jeep Safari event. One of them was the Grand Cherokee Trailhawk 4xe concept. This plug-in hybrid concept offers 56 MPGe and up to 25 miles of pure all-EV range, boasting a near-silent driving experience when piloting it over off-camber rock ledges and off-pavement terrain. A new sway-bar disconnect adds to its off-road capability, too. 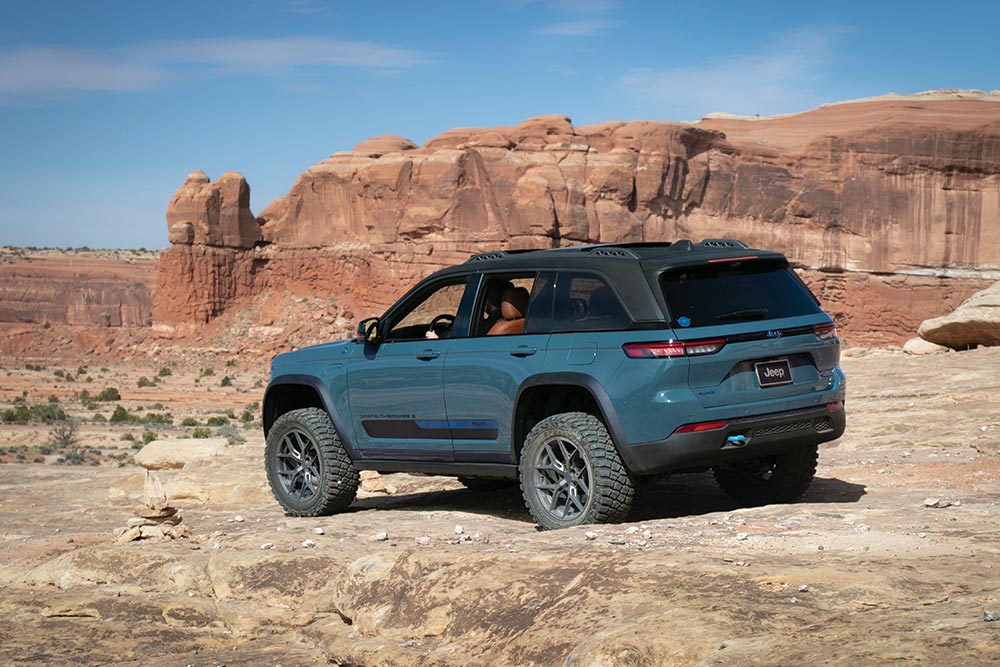 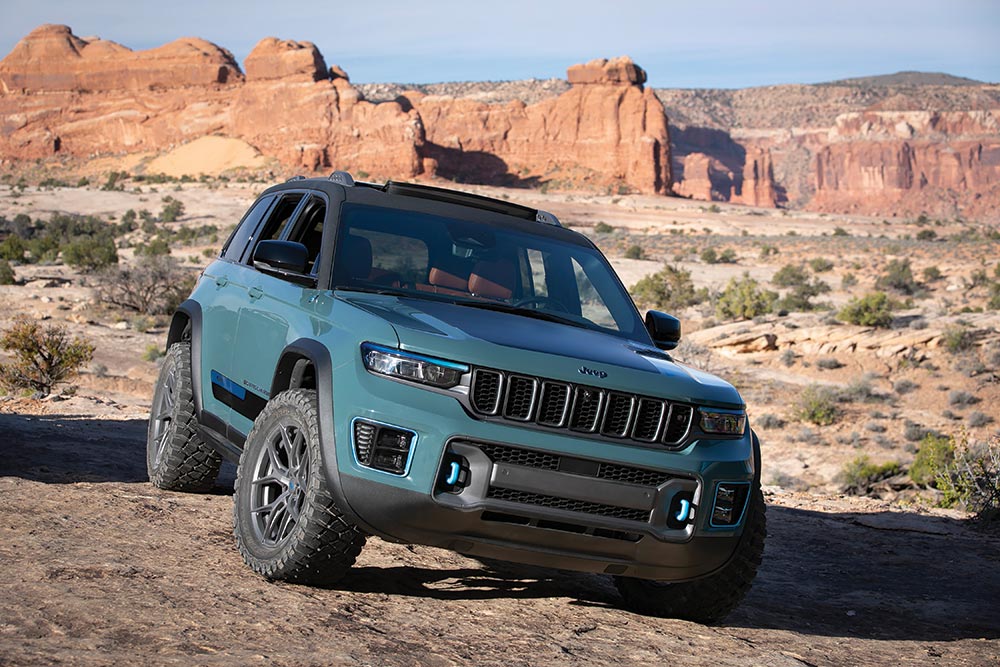 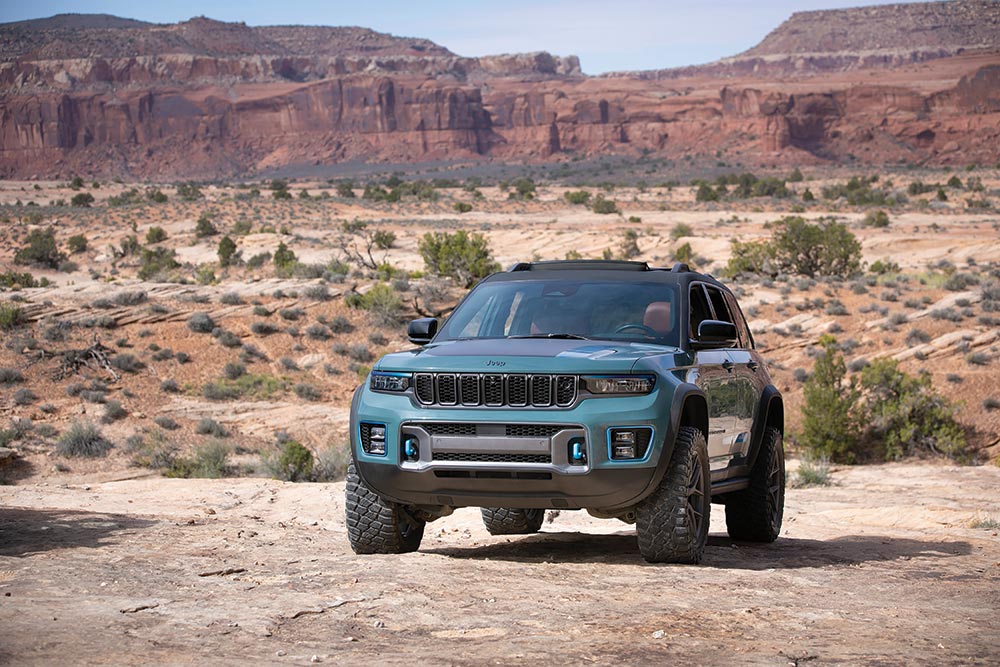 The Grand Cherokee Trailhawk 4xe concept gets 56 MPGe and up to 25 miles of pure all-EV range.

First built in 2002, the Jeep Wrangler Rubicon was initially a pipe dream for a small yet vocal group of engineers at the company’s headquarters. Calling themselves the “Lunatic Fringe,” they constructed the very first Rubicon 4x4s on their own time and dime. 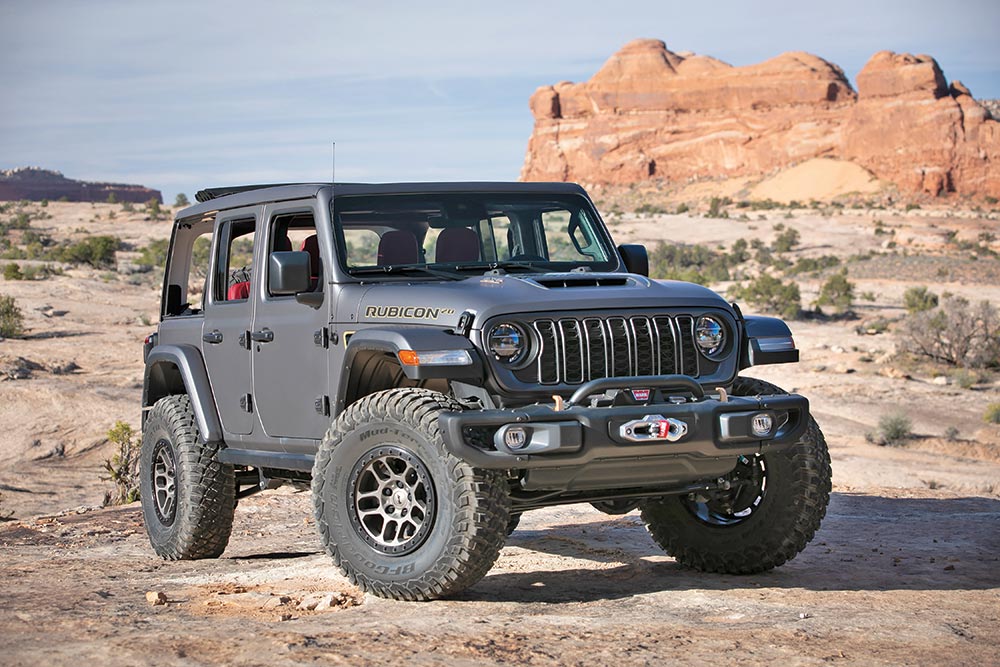 After deep discussions, however, Jeep succumbed to their pleas and started a small production run of Wrangler Rubicons, expecting the beefed-up beginner to soon die off. Much to their surprise, the Jeep Wrangler Rubicon took off. It powered its way into a mainstay moniker, currently capturing 30% of sales. 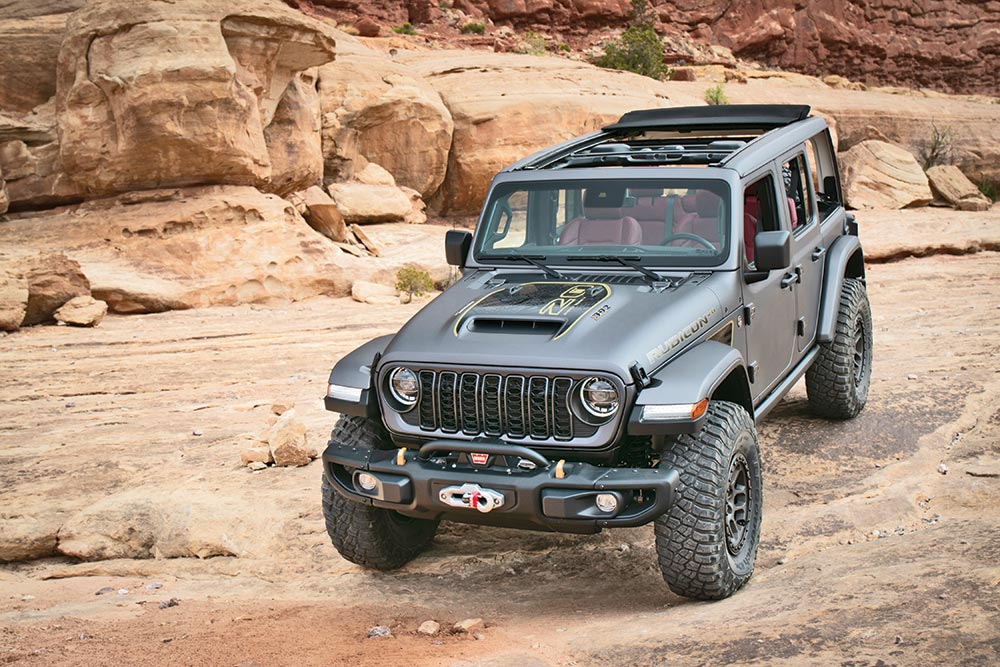 A Sky One-Touch Power Top, removable side panels and custom-built half doors offer an open-air experience. 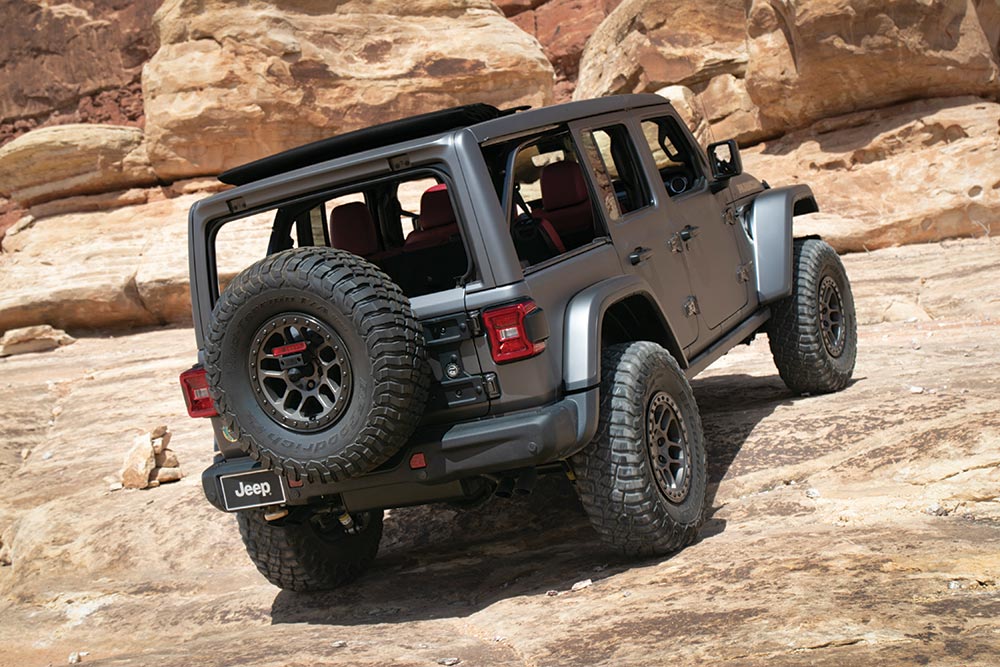 A matte Granite Crystal exterior vinyl wrap keeps the 2022 20th Anniversary Rubicon looking polished, even when off-roading it in Moab.

Note: Jeep hinted that part of the 20th Anniversary concept will work its way into next year’s production-ready 20th anniversary edition, although they didn’t specify the exact upgrade. Our wish: the 392’s 6.4-liter V8 powerplant. The Jeep Bob concept combines two specific models: the newcomer Gladiator JT truck and the crowd-favorite Wrangler Rubicon. Showcasing a “bobbed” bed, shortened by 12 inches, Bob’s fun, retro look makes us wonder if this is what “Back to the Future’s” Marty McFly would drive if he rocked a customized 4×4. Bob’s B-pillars and doors have been removed, making this retro-styled concept one cool adventure machine.

Designs of the Future The 2022 Jeep Bob concept shortened its bed by 12 inches, giving it better clearance but a smaller truck bed.

Best of Both Worlds

How did Jeep made Bob a reality? By incorporating a turbocharged 3.0-liter Eco-Diesel V6 engine mated to a TorqueFlite 8HP75 eight-speed automatic transmission. This combo gives Bob the low-end torque usually associated with deisels. A Mopar-supplied cold-air intake increases the engine’s airflow.

Bob’s B-pillars and doors have been removed, blurring the lines of adventure from the inside out. Bob stole the show with its colorful and capable personality. 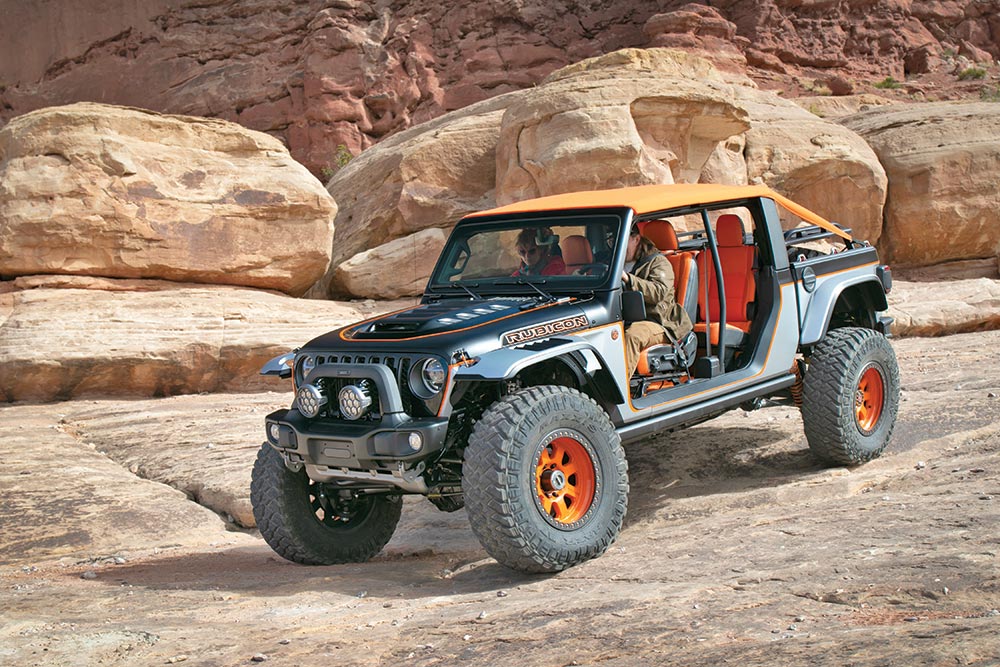 Looking to the Future

A variety of powertrains as well as JPP and Mopar parts made strong appearances at this year’s concept event. However, electrification was front and center. Magneto 2.0 captured everyone’s interest, with four additional Jeep 4xe concepts flanking it. Each electrified vehicle demonstrated variety and capability, as well as the company’s dedication toward an electrified future. While no one knows when the first production-ready all-electric Jeep may come to life, we’re 100% sure Jeep is charged up about it – and its long-awaited debut.

While no one knows when the first production-ready all-electric Jeep may come to life, we’re 100% sure Jeep is charged up about it – and its long-awaited debut.

Editor’s Note: A version of this story previously appeared in the TREAD September/October 2022 issue.