In the dead of night, fellow overlanders Trisha Mills and Bill Carmichael awoke to a wall of smoke and heard windows in their second story dining room blowing out sequentially as the fire headed toward them. With little time to react, they were forced to toss their beloved miniature Schnauzer, Dexter, out the window and jump approximately 20 feet to the ground, following after him.

Four months after they purchased the heritage building—which included the historic Hitching Post restaurant with their living quarters atop it—it caught fire. Ironically, last-minute plans changed Trisha and Bill’s outing of a camping adventure to now staying at home; they were going to have their fire extinguishers and fire arrest system inspected the very next morning. Little did they know then that those same adventures outdoors would help recover from the fire. 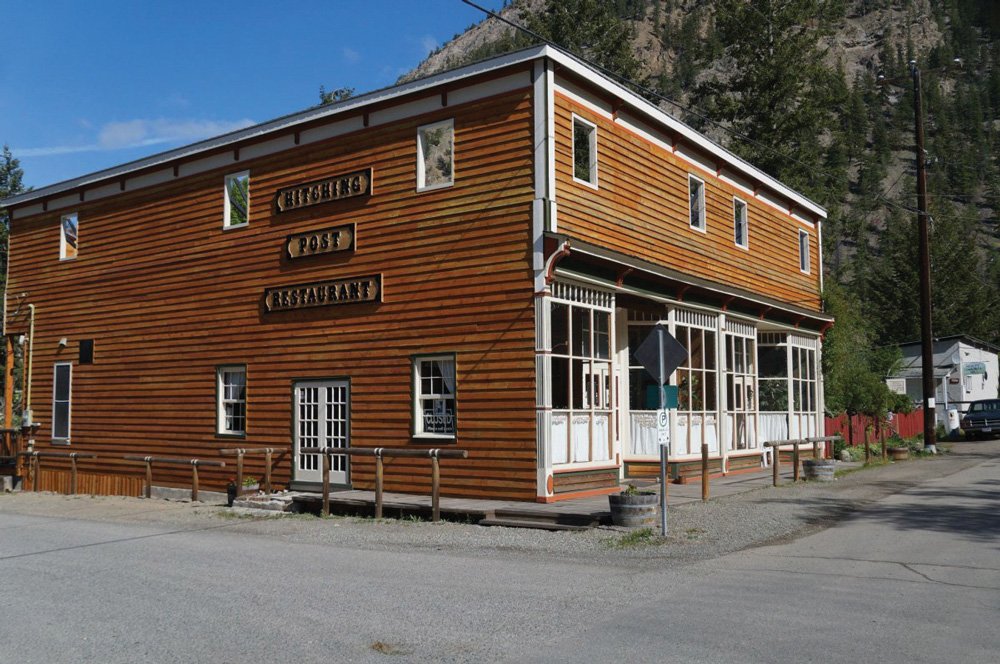 They nearly lost their lives when the fire engulfed the Hedley, British Columbia, Canadian property—trapping them on the second story with no way out but to jump. As Dexter ran off into orange-stained darkness, neighbors pulled Trisha and Bill to safety. Tragically, they watched their livelihood burn to the ground. Outdoor adventures are what originally brought them together, and that would also help heal their wounds after the horrible fire.

In 2011, a chance meeting on the Internet introduced the pair. They each wanted company when exploring “as it seemed all our friends at the time didn’t want to do that kind of thing,” Trisha says. They went off-roading and hiking together. Their relationship developed, even though it wasn’t obvious to them. Trisha explains, “It came to light we may be dating when a friend’s friend asked us when we started dating and we both said we weren’t. But then she tilted her head and said ‘Oh, yes you are!’” That led to a night of discussion and drinks—and the rest is history.

“TRAVEL ADVENTURE IS WHERE THE HEALING BEGINS. IT CAN OFFER TIME FOR INTROSPECTION AND GREAT LEARNING.” —BILL CARMICHAEL 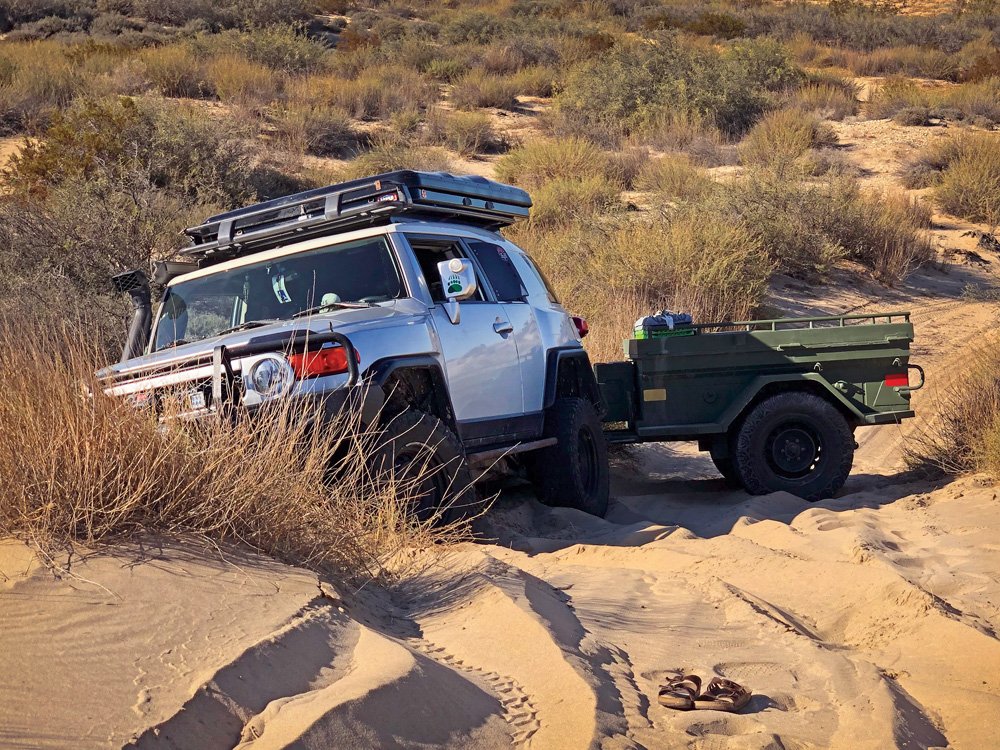 Another day, another gorgeous vista to spend the night in the peace of desert mountains.

“We both were looking for a change from city life [from Kamloops, British Columbia] and the restaurant opportunity came across our path and it just felt right,” Trisha states. “We both love being creative in the kitchen, but not just for ourselves. We love trying new things and sharing with friends and family.” Bill, a millwright journeyman by trade, and Trisha, an office administrator, moved to Hedley after buying the 115-year-old historic Hitching Post restaurant in the small town (about an hour’s drive west of Penticton, British Columbia). 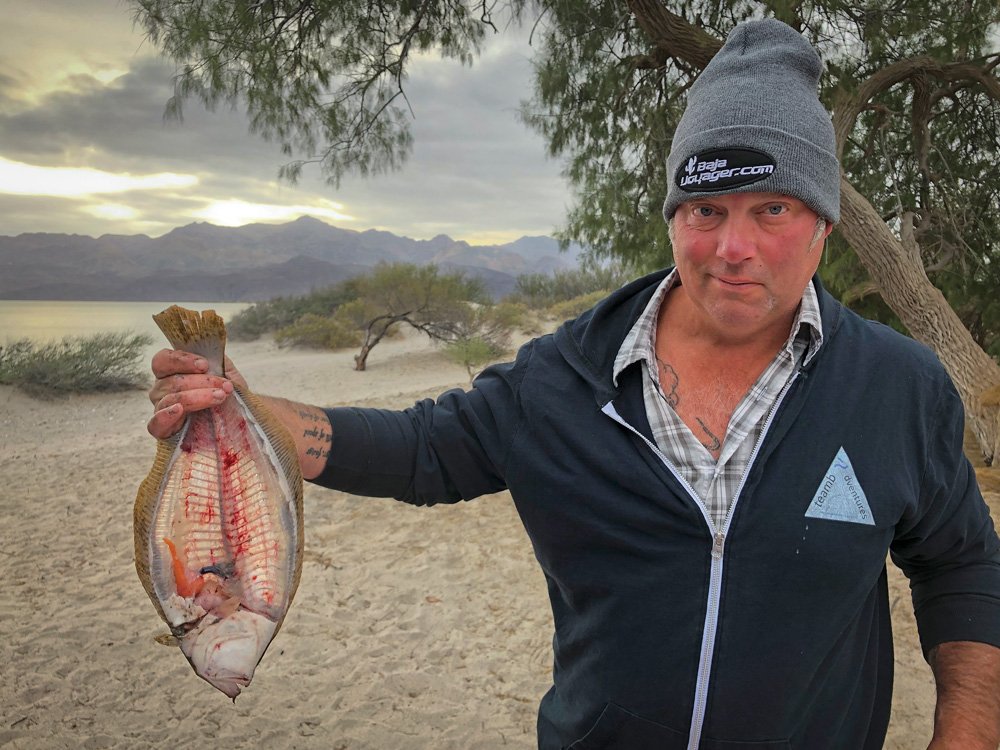 Bill’s first attempt at filleting a flounder. No waste and a delicious meal was had.

“Growing up my grandma and aunt owned a restaurant,” Trisha explains. “I had my own booth to fill napkin holders and wipe menus but was allowed to serve the regulars toast.” Once Trisha’s duties were fulfilled, she was served a plate of fries and had “staff meetings” with her helper, Mr. Bunny.

Nearly two years later, Trisha and Bill are still recovering from lower body injuries, which include broken bones, as well as muscle and nerve damage. Additionally, they’re still working with insurance in order to rebuild the restaurant and their home. But, once they were able to walk again, they got back on the road to find themselves. Their voracious appetite for life didn’t stop Dexter and them from exploring nature via their 2007 FJ Cruiser after the tragedy hit.

“THE POWER OF LOCALS AND THE OVERLANDING COMMUNITY HELPED THEM GET TOWARD ADVENTURE QUICKLY.”

“Travel adventure is where the healing begins,” Bill states. “It can offer time for introspection and great learning.” Adventure travel doesn’t have to cost a lot. Bill furthers that a well-maintained, reliable vehicle can prevent costly or unplanned repairs—“except when wrong decisions get made.”

Trisha’s physiotherapist shared some wise advice: Motion is lotion—use it or lose it. That’s not always easy for the duo, but it’s necessary. 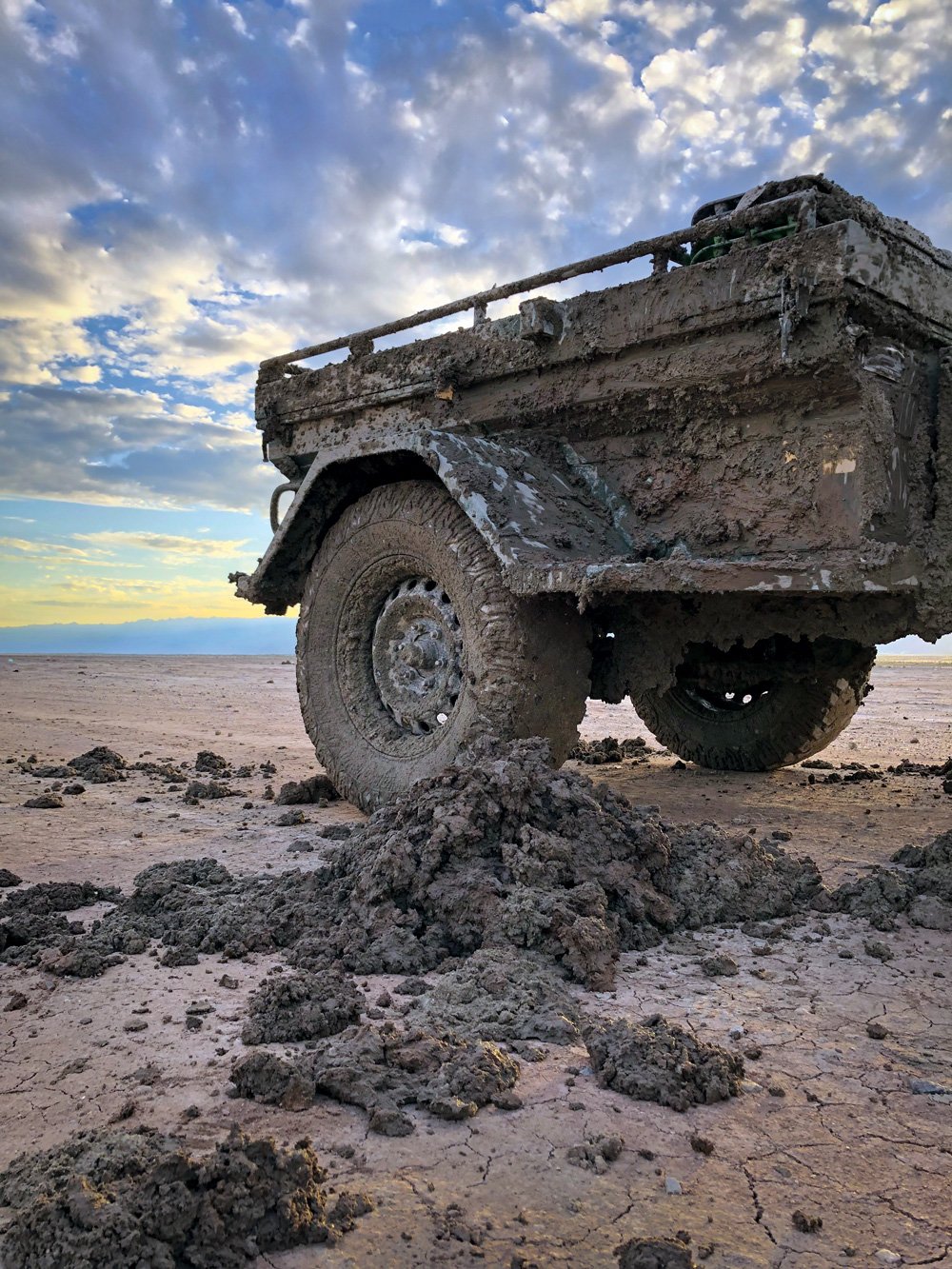 The trailer after a muddy drive through what they thought was a hard, dry lakebed. Expect the unexpected.

Both Trisha and Bill grew up off-roading and exploring with family and friends. “As adults we found our way back, even more so once we got together. The freedom it can give you and being away from crowds/city life can give one a ‘reset and refresh’ in one’s life,” Trisha adds. Adventures outdoors with their trusty FJ Cruiser have taken them from British Columbia all the way down to Mexico and back.

Their FJC boasts a factory differential locker and upgrades, which include ATRAC ARB bumpers (front and rear), an ARB roof rack, a second battery with custom tray and battery doctor switch, and a Safari Snorkel. The FJ’s rear seats were removed and a deck was built for storage. The top of the deck boasts an ARB fridge on a custom-built slide-out. Aircraft-grade attachment strips were fastened around the perimeter to tie down other cargo. MOLLE-style seat covers offer the couple more storage. A custom heat exchanger (built and added to the cooling system) coupled with a 12V pump, adds on-board hot water with any available source of H2O—great for post-trail showers. 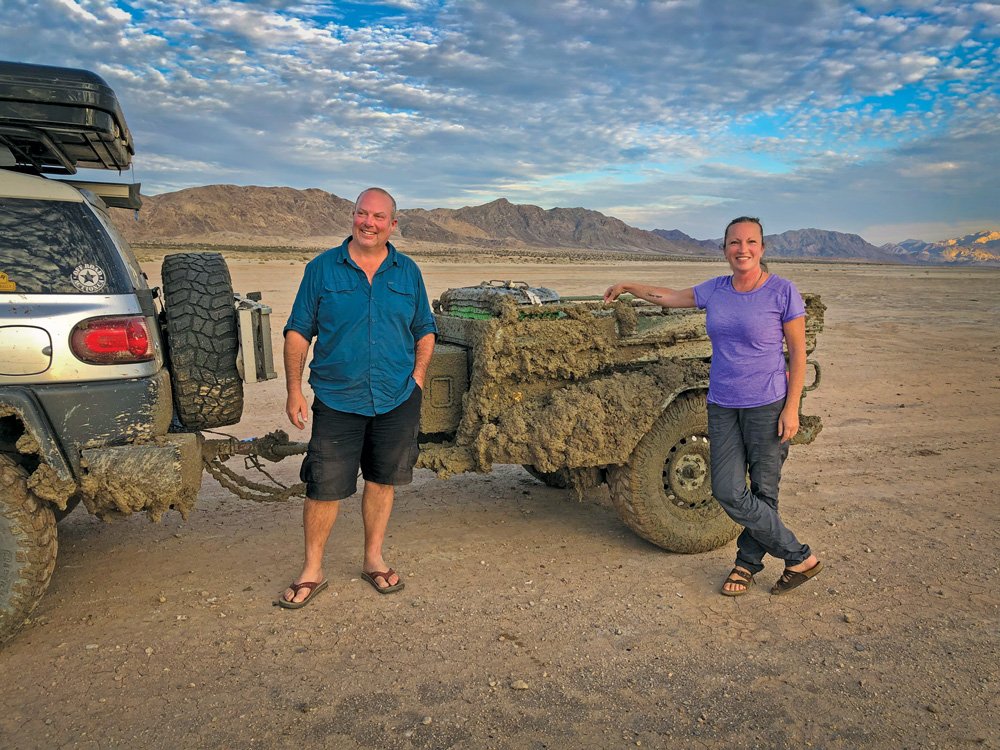 Trisha and Bill cross a wet/dry lakebed that started out hard, fast, and smooth, but quickly got muddy.

Bill exclaims he was drawn to the vehicle for its unique appearance. Plus, it’s a Toyota. The marque’s quality, durability, and reliability drew him to the brand. “When you see an FJC, you know it’s an FJC. Had a couple of early ’80s pickups for farm/work trucks,” he says. “Rugged, [can] take a beating and get the job done, even if broken.”

The FJ’s sidekick is a 1990(ish) CDN M101 1/4-ton Canadian military trailer. The couple purchased it used and built it up for overlanding excursions. Their trailer boasts rugged 33-inch tires, 100-watt solar panel, Toyota hubs, 12V LED lights, 35-gallon water tank, as well as an Optima RedTop battery with 1,500-watt inverter and 12V water pump. The hard lid offers rails for a roof top tent, boat, and so on, and currently showcases a Tepui Hybox hard-shell tent on it.

Their FJ Cruiser has visited remote areas that range from exploring the Bonneville Salt Flats to up-close-and-personal encounters with the not-so-dry salt mud of Baja. The couple witnessed countless beaches, sunsets, and serenity, but also had challenges regarding mobility—with both their bodies and the FJ.

“THEIR VORACIOUS APPETITE FOR LIFE DIDN’T STOP DEXTER AND THEM FROM EXPLORING NATURE VIA THEIR 2007 FJ CRUISER AFTER THE TRAGEDY HIT.”

In addition to getting the 4×4 stuck numerous times (but having proper gear to recover themselves), they recently sunk the FJC to its frame in soft, hot, Mexican sand. After multiple attempts to recover their adventuremobile, their last shot at freeing the FJ proved nearly fatal.

Reversing the 4×4 out of the sand, while using 4-Lo, diff locks, and a good bit of torque proved too taxing—the attempt shattered their planetary gear assembly for First, Third, and Reverse gears. However, friendly locals finally helped them break free from the situation and they limped themselves back to San Felipe (using only Second and Fourth gears). 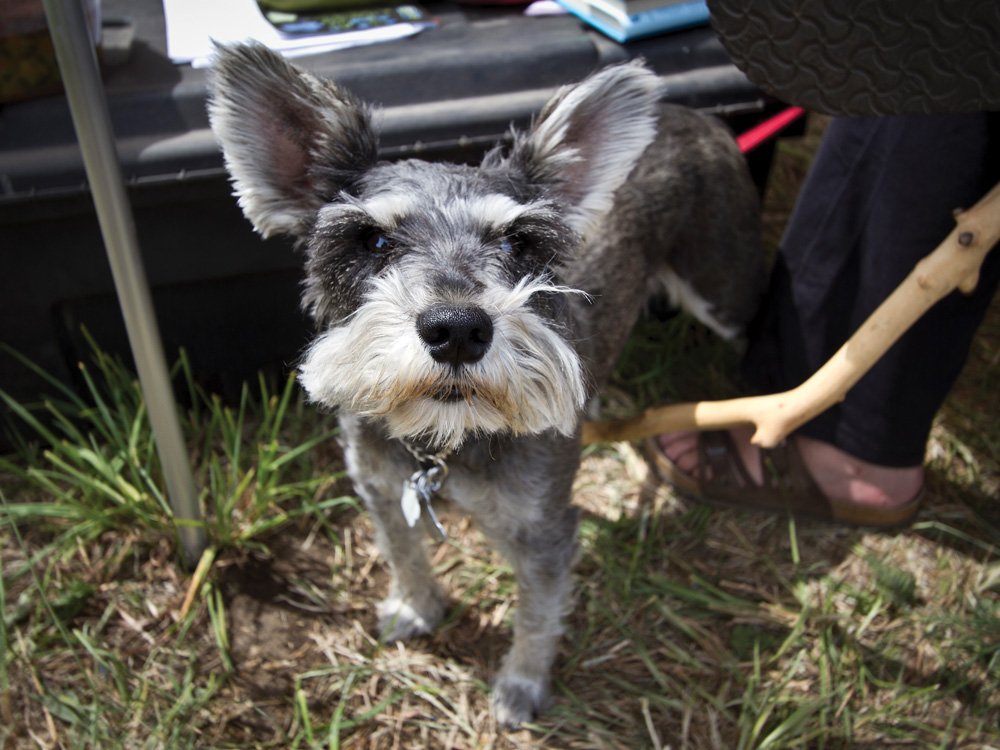 “Friends helped us source a mechanic and the best option was for the truck to go to Mexicali,” Bill exclaims. They had a place to stay but the stress of the unknown damage/cost/time to repair was almost too much to cope with. Bill says, “Keeping calm, analyzing the situation, and dealing with what one has control over is essential to any kind of forward movement.” The shop picked up the FJ, repaired it, and returned it to them in San Felipe. However, there were still issues. The repair on the planetary gears was great but they did not tighten all the bolts and screws! The FJC was leaking about a quart of oil per 125 miles.

Bill, who shouldn’t be on his knees, was under the vehicle pouring oil in so they could find another shop on the other side of the Baja peninsula. Two days later they were back on the road. The power of locals and the overlanding community helped them get toward adventure quickly.

Future travel plans are to head north to Tuktoyaktuk, Northern Territories, Canada, as well as to head east past Calgary. The list is endless. They’re also rebuilding their restaurant and home. Trisha and Bill recently purchased a food trailer as a source of income as “disability was denied because we aren’t broken enough and too educated,” she states. However, they started serving customers again because “serving food makes us happy.” As for the restaurant, Trisha says they hope to break ground next year, “as long as all the moons align.” 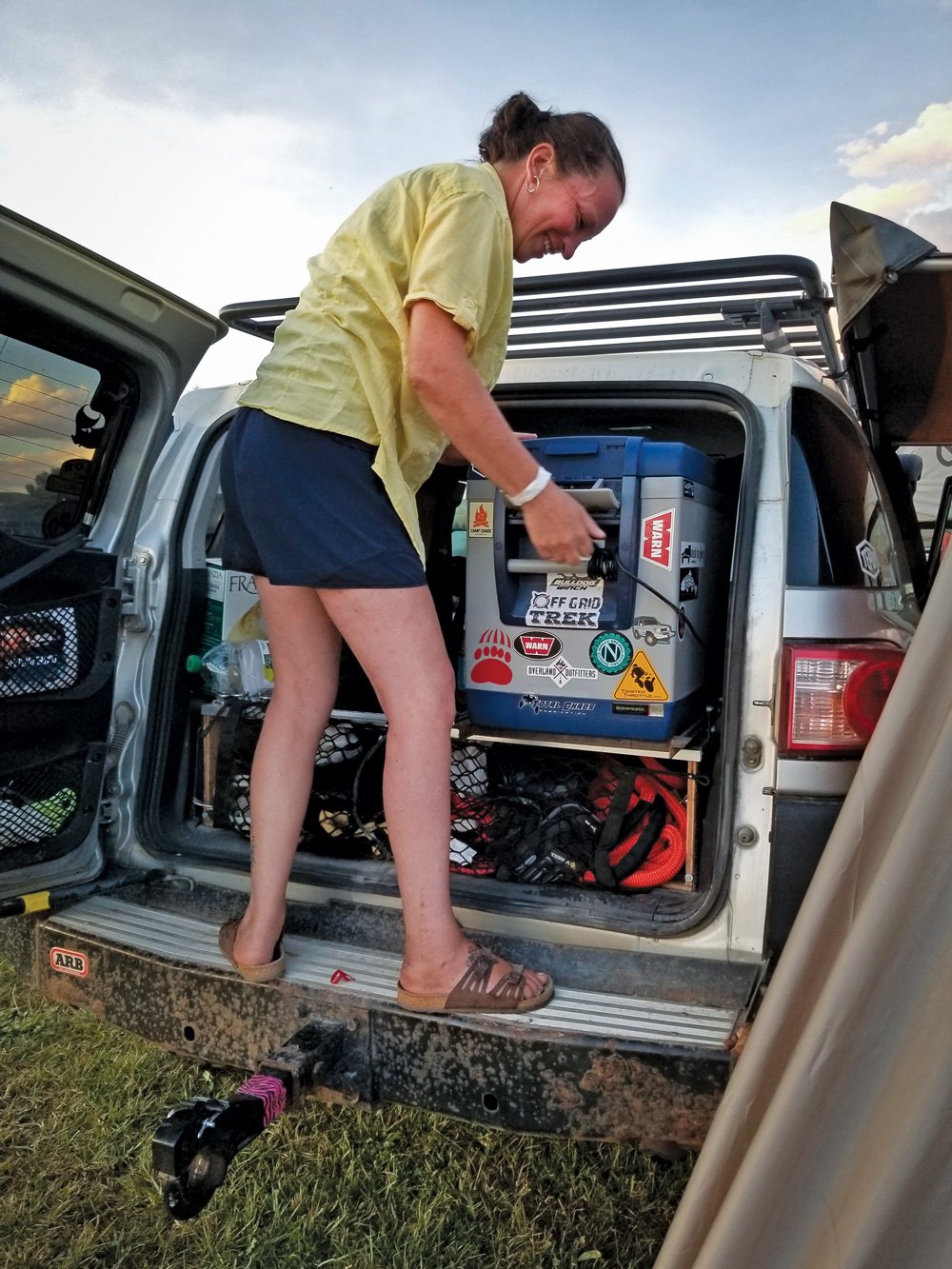 Everything is strategically packed into the couple’s FJ Cruiser, especially in their ARB fridge. 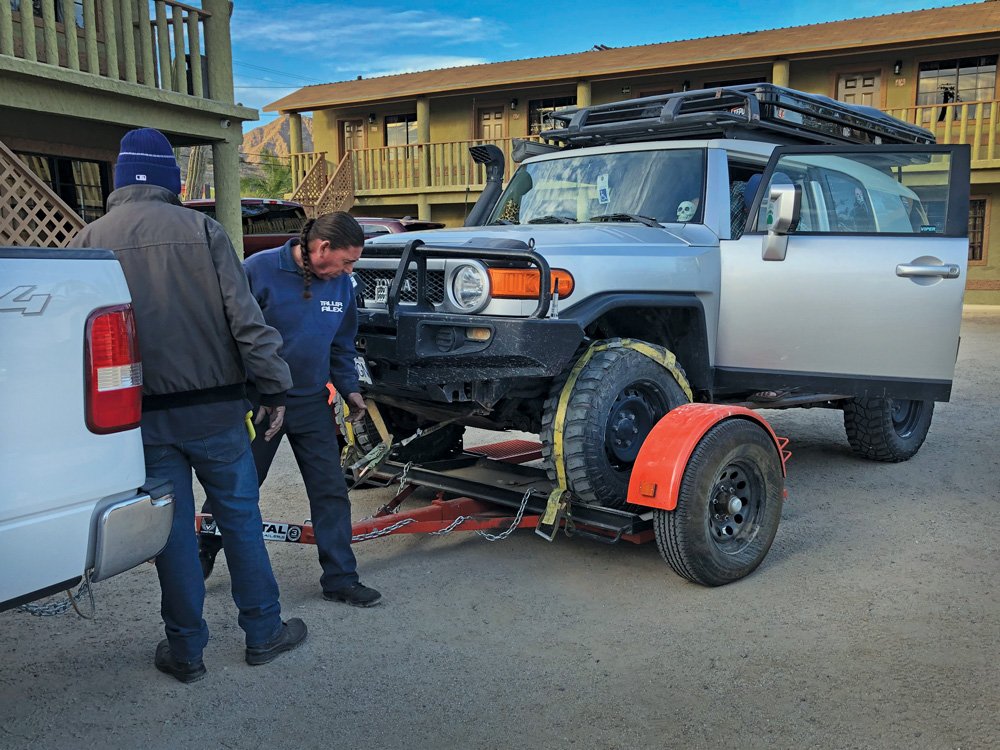 Their home getting prepped for the trip to Mexicali for transmission repairs. While they had a place to stay in the meantime, the stress of the unknown damage/ cost/time to repair was still stressful.

“Setting goals but being reasonable with your limits is key,” Bill exclaims. “You still need to push yourself, regardless.” Even though their physical bodies may be limited, their drive toward adventures outdoors and building a future together with a new Hitching Post restaurant isn’t. It just may be what the doctor ordered.

“REMOTE PARTS OF MEXICO CAN PRESENT ONE WITH WONDER AND BEAUTIFUL SURROUNDINGS.” 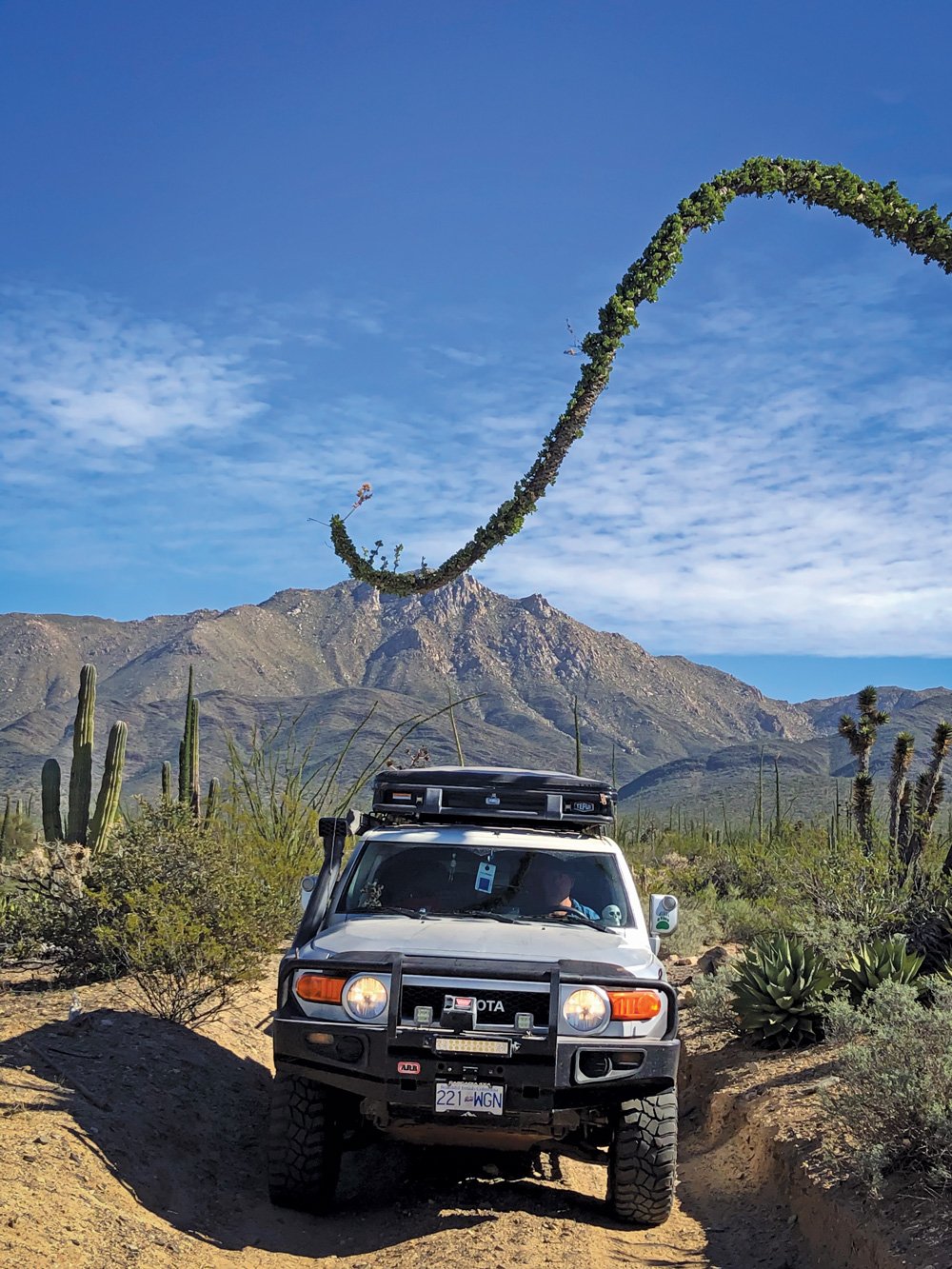 A GoFundMe has been set up under Hitching Post Fire to help Trisha and Bill.