Lesson Number One for Travel Safety

Lesson number one in safety and vehicle security while traveling: Don’t be stupid.

“There are bandits ahead on this road—very bad men! We can guide you past them.”

The driver of the 70-series Land Cruiser pickup seemed touchingly concerned for our welfare, as did his grinning friends in the bed, dressed in djellabas and carrying AKs and a single century-old Lee-Enfield straight out of a David Lean epic.

We were headed west from the Nile across the Egyptian desert, tracing the route of a 1912 Carnegie Institute expedition. The two Carnegie scientists had been on camels; there were eight of us in three Land Cruiser Troop Carriers hired in Cairo. Our expedition’s goal was to precisely replicate the scientists’ photos to document the changes of a century. 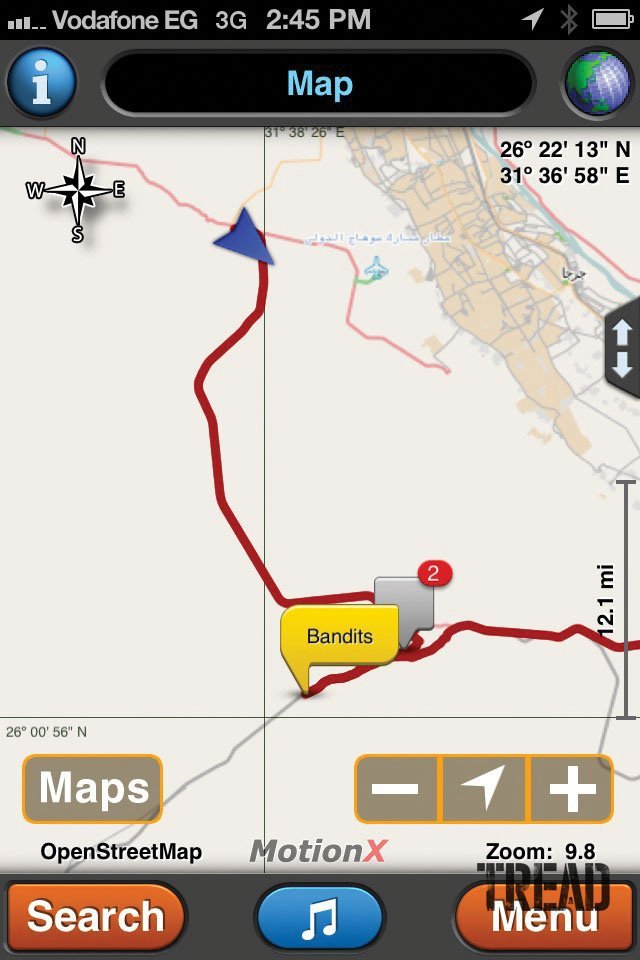 We’d turned off a tarmac road and had been paralleling a long-disused railroad line built by the British at the turn of the 20th century when the pickup appeared out of a cloud of dust and slid to a stop in front of our lead vehicle. There was some back and forth with our Egyptian guide, then the pickup turned around and led the way. Curiously, though, after a couple kilometers it took off at high speed and disappeared in the glare of the Saharan sun. Suspicions thoroughly aroused, we stopped the convoy and confronted the guide—who rather sheepishly admitted he now thought the guys in the pickup actually were the bandits, most likely now setting up an ambush.

We knew we couldn’t beat them back to the tarmac if they turned around and chased us, so we bumped across the railroad tracks and blasted completely off-tracks through wadis and over dunes—real Rat Patrol stuff—until we reached the well-traveled road between Luxor and Kharga.

Actually, overland travel is overwhelmingly a safe pastime. But it’s just as stupid to think nothing bad can ever happen as it is to think you’re doomed to die if you venture off paved roads or, God forbid, into some foreign country … like, er, Egypt. The best approach is awareness and preparedness, not paranoia.

I divide travel security into two parts: vehicle/equipment and personal. The former I address essentially the same way no matter where I am; the latter varies significantly depending on where I am.

The main focus with vehicle security is to make sure it’s still parked where you left it when you come back. The best way to do this is with a layered approach that makes your vehicle less attractive to thieves than someone else’s. It might seem eye-rollingly obvious, but taking the keys and rolling the windows all the way up is the first step many miss. Even an inch gap in a window is plenty for a thief to access the interior lock buttons. Next—even if you have a modern vehicle with factory anti-theft—is a visually obvious device, such as a steering wheel lock. These aren’t impregnable, but it’s another delay for them and thus another reason to move on. 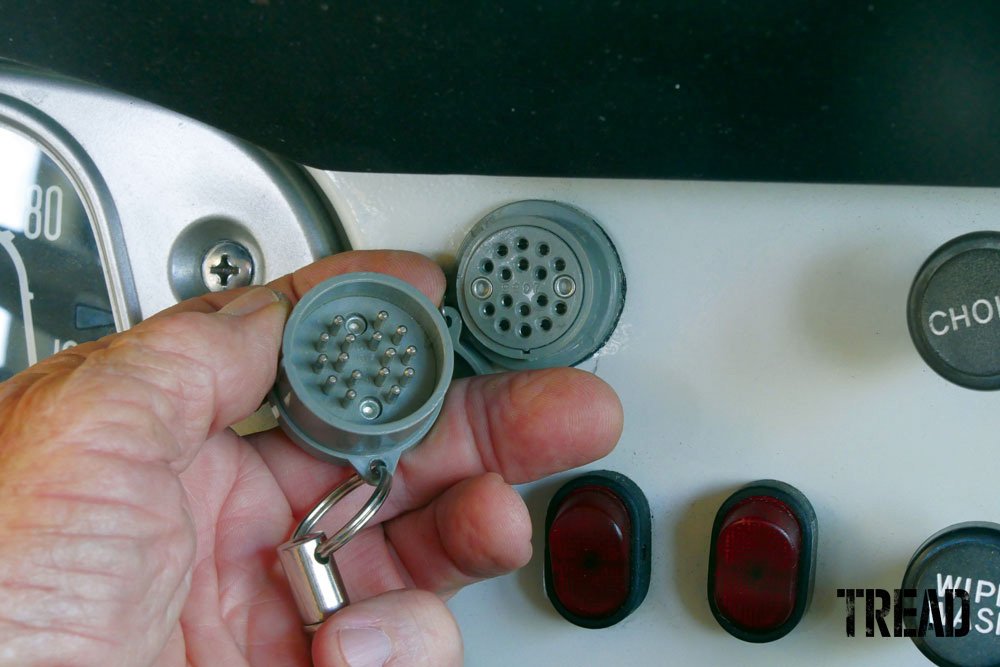 The Ravelco is an effective immobilizer that needs no moving parts.

Last, if not factory-supplied, is some type of immobilizer. I avoid complicated aftermarket alarms with door sensors and ignition interrupters; there are simply too many components to go wrong in the middle of nowhere. I prefer a simple, well-hidden or disguised kill switch. The ultimate in kill-switch sophistication is the Ravelco, which has zero moving parts and needs no hiding. A female receptacle on the dash or elsewhere accepts a unique male plug, without which the vehicle will not start. An armored cable into the engine compartment carries wiring that disables at least two engine systems and incorporates several false leads. The company claims no vehicle has been stolen by bypassing the system. A Ravelco won’t stop a thief from breaking in, but he won’t get your vehicle without a tow truck. (You can add a noise-only alarm if you wish; if it fails you won’t be stranded.) 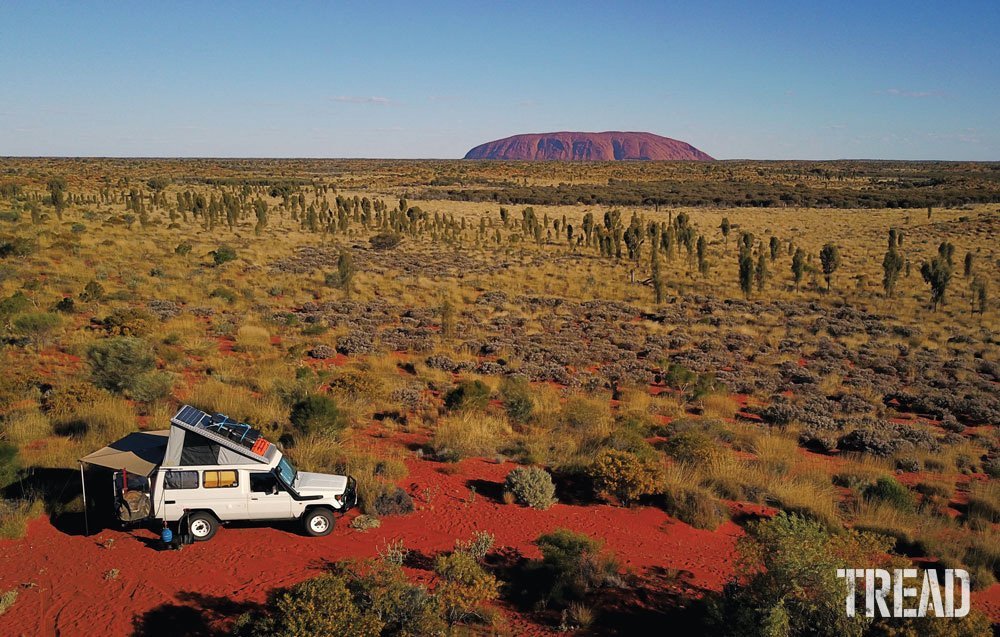 … but the closer you get to civilization, the more aware you need to be. A crowded hotel parking lot is a candy store for thieves.

NEVERTHELESS, RANDOMNESS HAPPENS, SO IT’S BEST TO BE PREPARED FOR IT.

Barring a built-in vehicle security device, an effective alternative is to remove a critical component. On older, gas-powered vehicles the distributor rotor or coil wire served admirably for this; on new ones the starter relay is equally effective. A top-post battery disconnect works well, too—just take the knob with you. If your vehicle has an ECU and alarm, you can run a light-gauge wire jumper with an inline fuse sufficient to supply power to those components. The fuse will blow if anyone engages the starter.

The other potential strategy for a vehicle thief is to steal it while it’s running—that is, a carjacking. In parts of Johannesburg I’ve seen street signs that read: “Warning: Carjacking Common in This Area.” But it happens in American shopping malls, too. 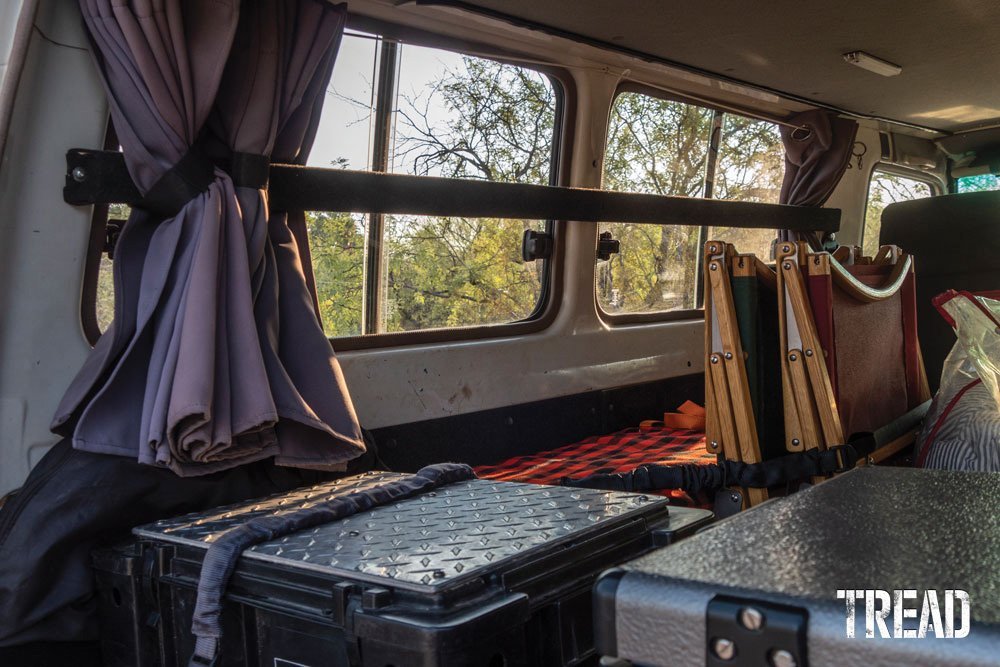 A bar bolted across the windows of the Troop Carrier prevents smash-and-grab loss of large items.

LESSON NUMBER ONE IN SAFETY AND SECURITY WHILE TRAVELING: DON’T BE STUPID. 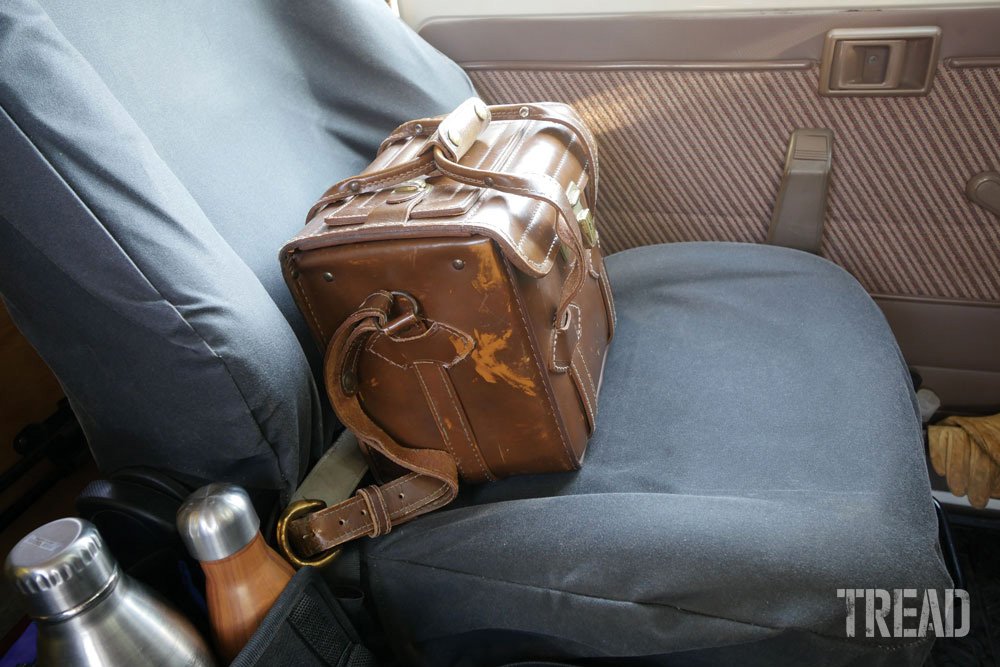 Don’t leave tempting items where they can be seen—and grabbed.

Again, some defenses are obvious. Locked doors, always. Windows rolled up whenever congestion appears. On a tactical basis, I never stop so close behind other vehicles in traffic that I can’t turn out of the lane, and I try to stay out of the center lane. In parking lots I maintain a constant 360-degree sweep of the surroundings. If I spot potential danger I simply walk past my vehicle and do a circle back into whatever business I just left. 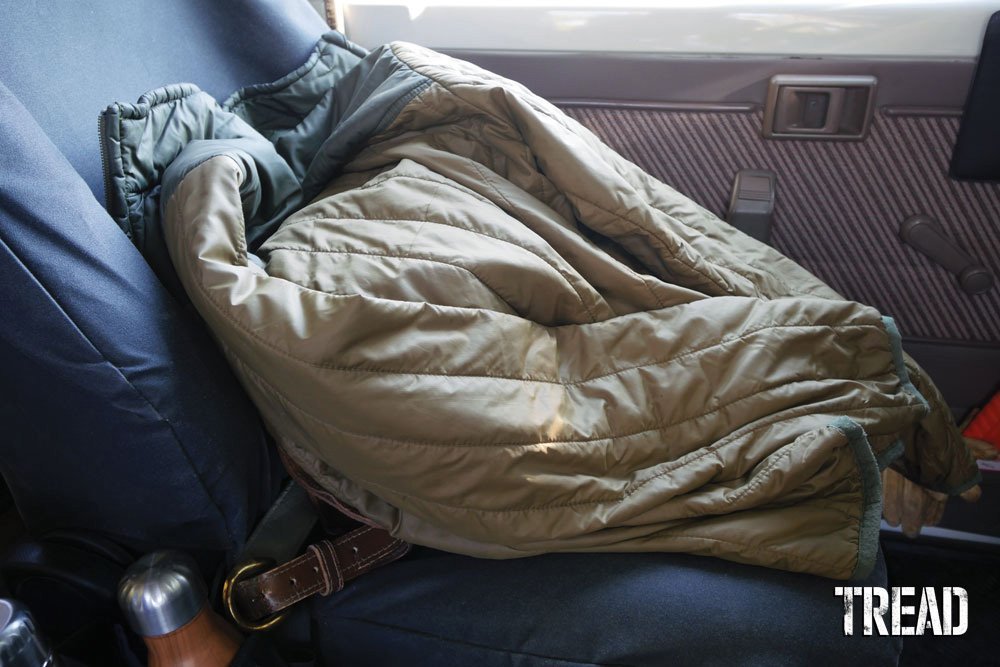 This does not count as concealment.

If your vehicle is either stolen or carjacked, systems such as LoJack, AutoWatch, or CarLock will transmit the vehicle’s location to your phone or the police, or even shut off the engine after a short interval.

Protecting equipment inside is more straightforward. First, keep valuables out of sight to anyone peering in the parked vehicle—and that doesn’t mean just throwing a jacket over them, which will only make the thief wonder what goodies you’re hiding. The emptier the interior looks, the better.

I had a 12-gauge steel safe made to fit under the driver seat of my FJ40; cameras and other valuables there are both out of sight and secured. Boss StrongBox makes seriously stout bolt-in vehicle safes and drawers in several sizes—but even one of those is better off hidden. On the Land Cruiser Troop Carrier we drove across Australia and Africa, we had steel mesh guards screwed over the rear windows, and a horizontal bar bolted across the glass of the two big side windows to prevent a rock-initiated, snatch-and-run of the luggage.

What about your own safety? The first rule for handling trouble is to avoid it in the first place (see beginning of article). For foreign travel that means checking in advance on forums such as the excellent Horizons Unlimited Bulletin Board (HUBB) for trouble spots or even dodgy neighborhoods in just about any country you can name.

When choosing a campsite in a sketchy region, I try to go with either densely populated or not populated at all. Thieves are generally cowards and unlikely to make trouble in a crowd. They’re generally lazy and don’t want to drive for miles and miles looking for a victim. But crowded parking lots in hotels are a different matter; it give thieves lots of opportunities because people are used to seeing lots of activity.

Nevertheless, randomness happens, so it’s best to be prepared for it.

Beyond advance research, your goal with personal security is exactly the same as with the vehicle: Make it more trouble than it’s worth to mess with you. Bad guys don’t want to get hurt any more than you do. If they see there’s a good chance they might, they’ll move on.

To Carry, or not to Carry

In the U.S., the big question is do you take a firearm? It’s important to remember that in the vast majority of cases in which a firearm is used successfully for self defense, no one gets shot—the mere presence of the weapon is sufficient to reorder the balance of power from the bad guy to the good guy, precipitating a hasty retreat. Nevertheless, if you commit to carrying one, it’s your responsibility to be familiar with laws regarding both carry and justifiable use of force wherever you travel, to know how to use the weapon, and to be willing to use it. If you’ve considered buying a firearm but thought to yourself, “I’m not sure I could shoot someone,” you need an alternative form of self-defense—period. And there’s no embarrassment in that. Pepper spray is a good alternative—but skip the little personal-defense canisters. Buy one made for hiking in bear country; far more range and more volume.

In foreign countries a different approach is necessary. Firearms are out, of course; pepper spray and Tasers are illegal in most countries, and in many (Australia, for example) even folding knives that lock are verboten. So if you want to bring a PDW, it needs to be something not recognized as such, and legal in most countries.

THE BEST APPROACH IS AWARENESS AND PREPAREDNESS, NOT PARANOIA. 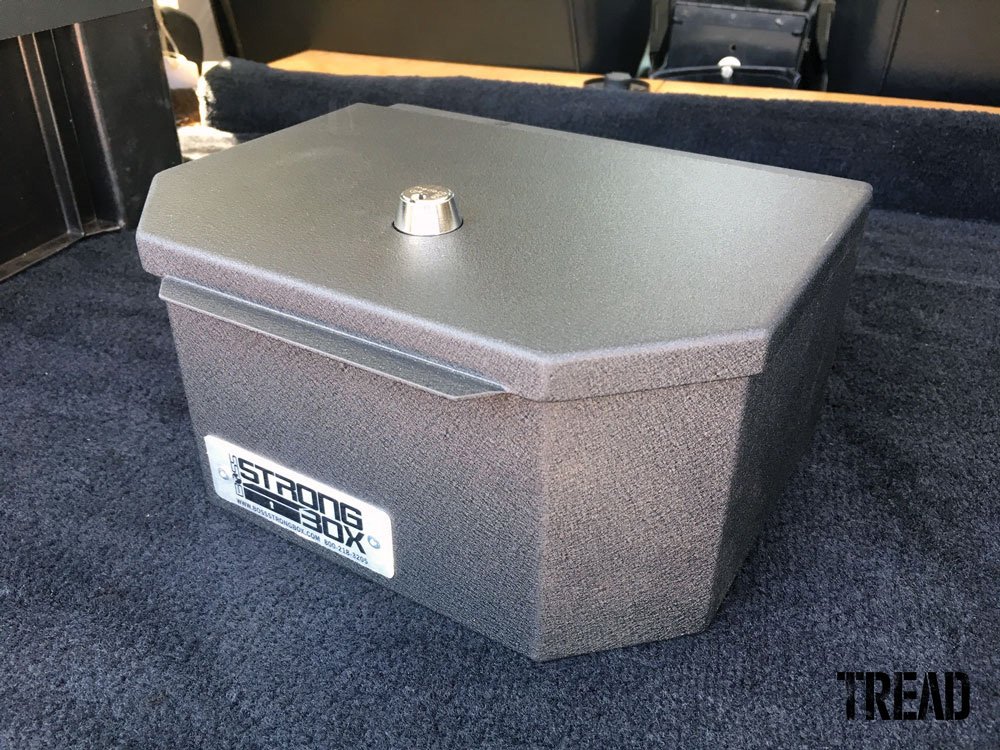 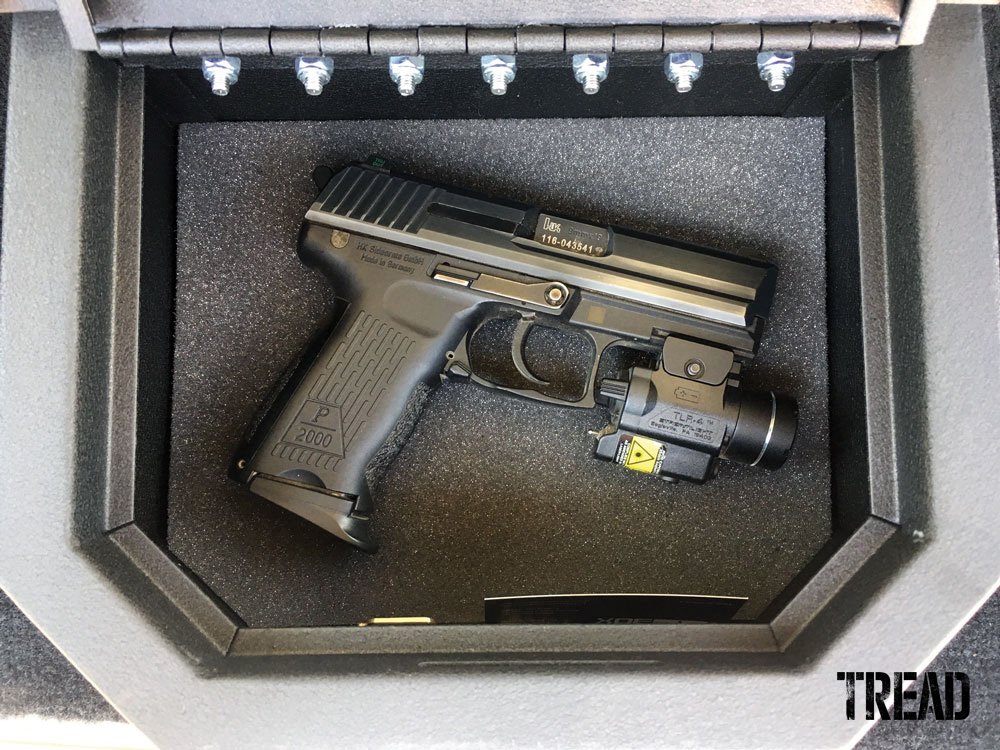 The small Boss StrongBox is perfectly sized for a handgun or camera.

Somewhat astonishingly, a speargun is one such device. In a hostile confrontation, its intimidation factor is enormous, and its actual utility for defense is considerable as long as you remember you have only one shot. Just make sure you have a diving mask and fins to go with it, in case you’re questioned. (And, incidentally, fresh grilled fish on a beach is hard to beat.) 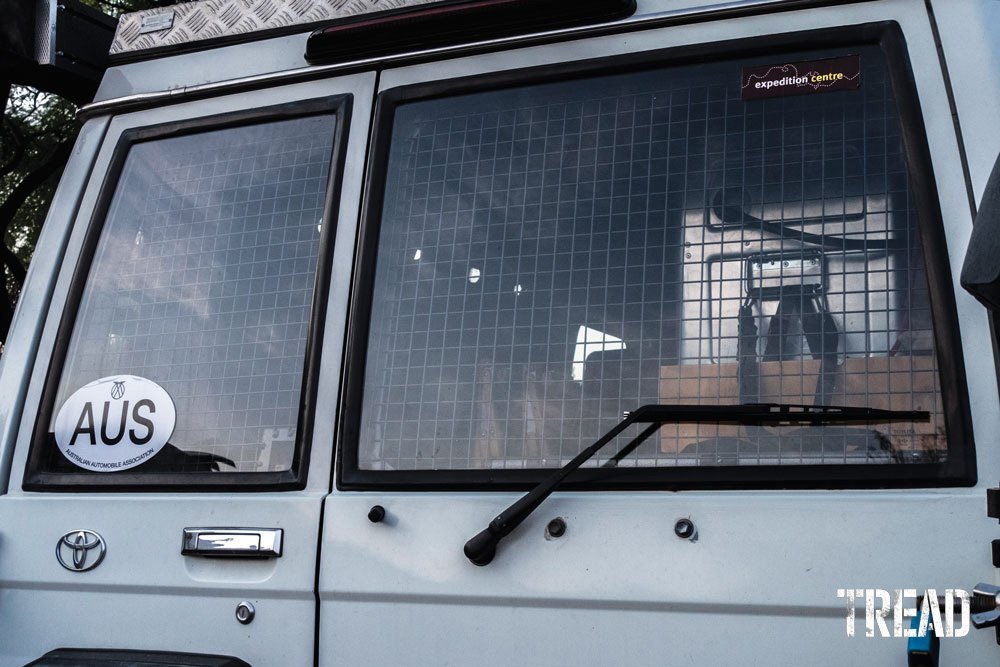 An axe is another multi-purpose tool/weapon, as are various “tactical” shovels available online. A friend of mine carries perhaps the ultimate nondescript weapon—a 2-foot-long welding cable. He gave me a light swat with it as a demonstration, and I knew I wouldn’t want to be hit with it in anger. 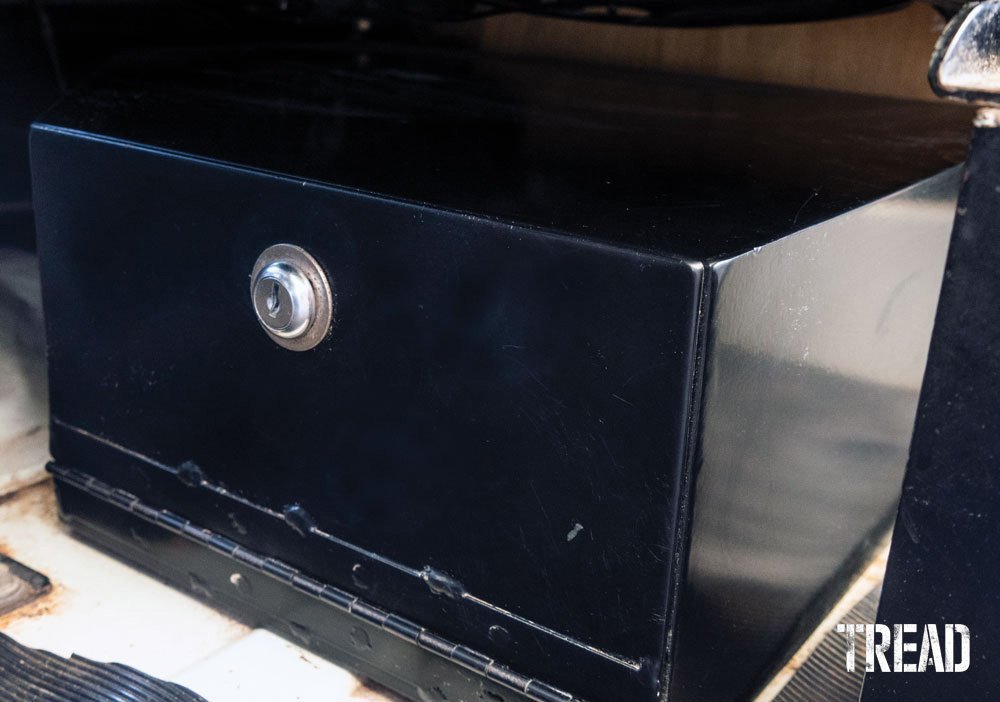 A custom-made 12-gauge steel safe secures valuables under the driver seat of our FJ40.

This is all smart preparedness, but don’t ruin your trip obsessing on the possibility you might need to whack someone with an axe. In the end, your best PDW is the one between your ears. Employ it frequently and you’ll be less likely to need the others.