→ Submit your rig and win a Tread magazine feature of your truck! ←
Get the Magazine
Camping, Features, Off-Road, Outdoor, Outdoor Adventures
Written by Chris Collard 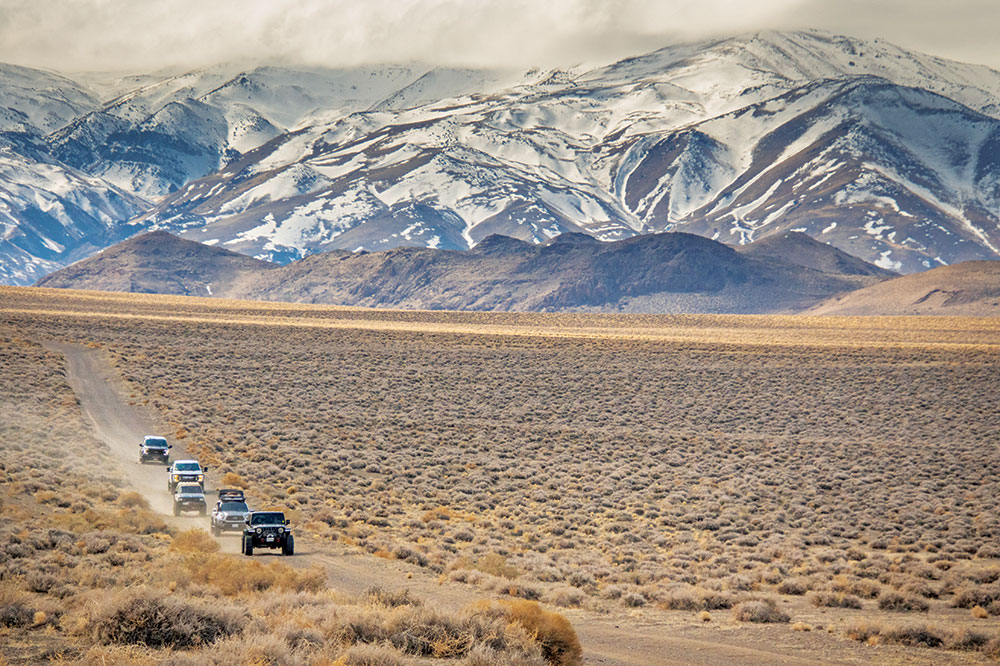 Peering over the edge, my eyes slowly adjusted to the inky abyss below—a wormhole in the earth that seemed to spiral into oblivion. I glanced up at my traveling mates and treasure hunters near the mouth of the crevasse, reaffirmed my snowy footing and carefully backed away to safer ground.

This was not a cave or natural grotto but a deep fissure formed by the hands of men with picks, shovels and dynamite. My friend, “Geology John” Mears, picked up a chunk of rock and began a short dissertation on its formation and elemental properties.

This was the Nightingale mine, one of a plethora of mines that pepper a range of mountains of the same name. I joined the group and listened. We were standing on “hallowed” ground—hallowed, that is, if you were a treasure hunter at the onset of World War I. 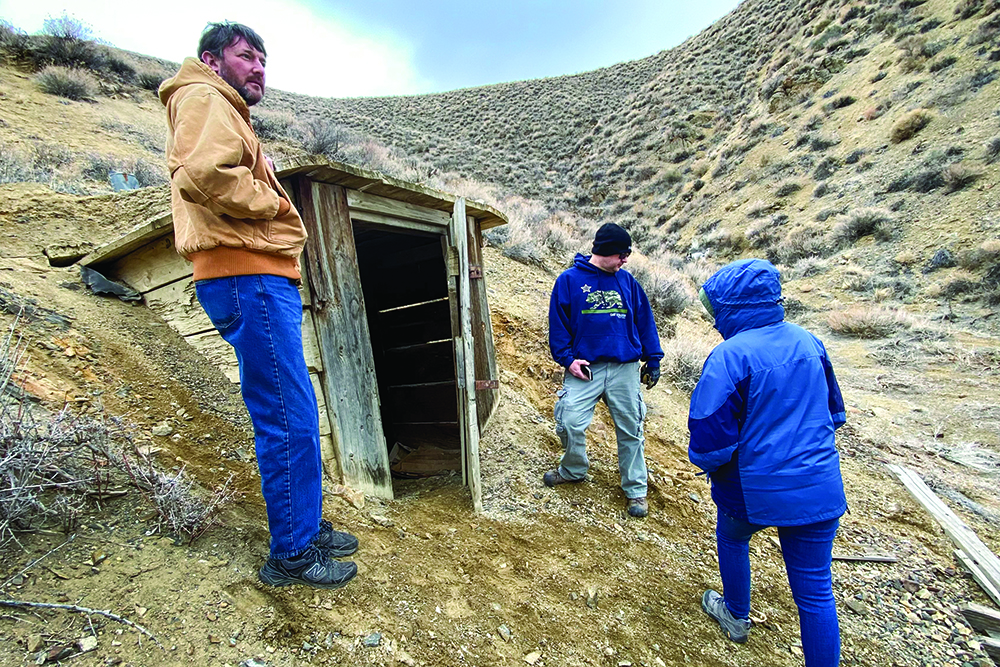 Timber from the Sierra Nevada was harvested en masse to construct large ore slides such as this one at the MGL mine.

I had joined the Sierra Treasure Hunters for a journey into the rich history of northern Nevada. The previous morning, we had aired down the tires on the edge of the Winnemucca Dry Lake, a vast and arid expanse of alkali and silt. Above, high on the adjoining mountains, were tiered layers of horizontal steps such as those you might see on a lake shore in late summer. On the lake bed were hundreds of odd-shaped mounds resembling the aftermath of a mud-slinging battle between giants.

We gathered around John, who transported us to an epoch before the first Europeans set sail for the Americas, before Christ changed the world with his words and before the Egyptians laid cornerstones for the Great Pyramids of Giza. At that time, about 13,000 years ago, the spot on which we were standing would have been covered with 500 feet of water. Winnemucca is one of the many desiccated skeletons of ancient Lake Lahontan, an endorheic inland sea of the Pleistocene period that covered much of western Nevada. The mud blobs, which ranged from minute to massive in size, were remnants of steam vents in the lake’s floor. 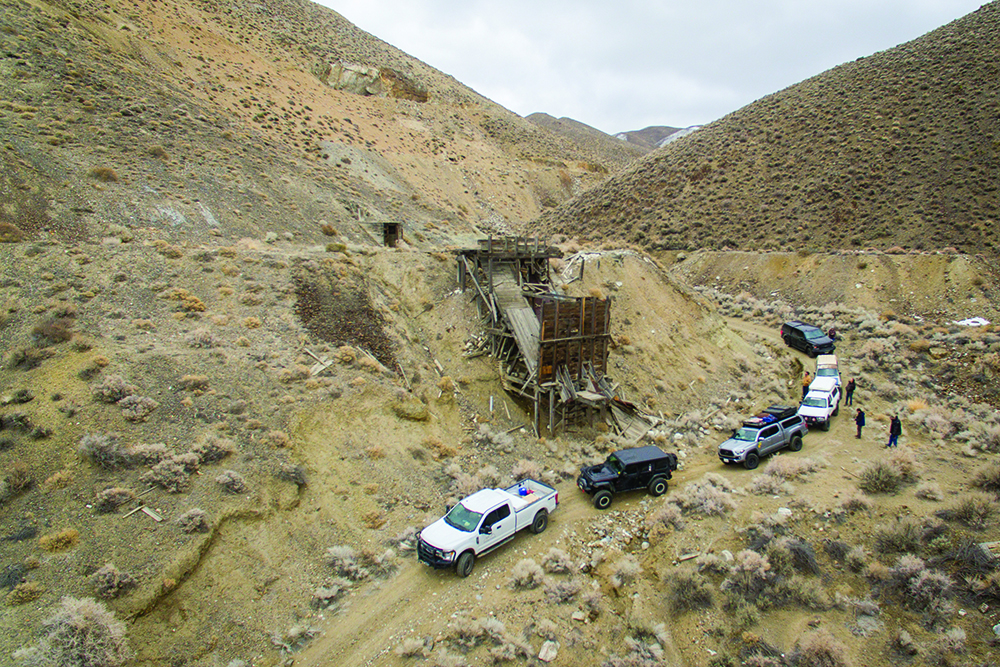 Partially buried dugouts were used to store core samples drilled from the hillside. Each core was catalogued and neatly stacked in boxes for later analysis.

Engaging four-wheel-drive, we skirted the shoreline to the east, stopping at a large concrete structure at the entrance of a narrow canyon. These were the remnants of the MGL, a mining operation started by C.R. Cowles in 1917. The treasure sought by Cowles, along with every prospector in the region, was tungsten.

Venturing up the ravine, we found a set of narrow-gauge rails that disappeared into a tunnel, its other end terminating on an elevated landing designed for dumping ore into awaiting wagons or trucks. 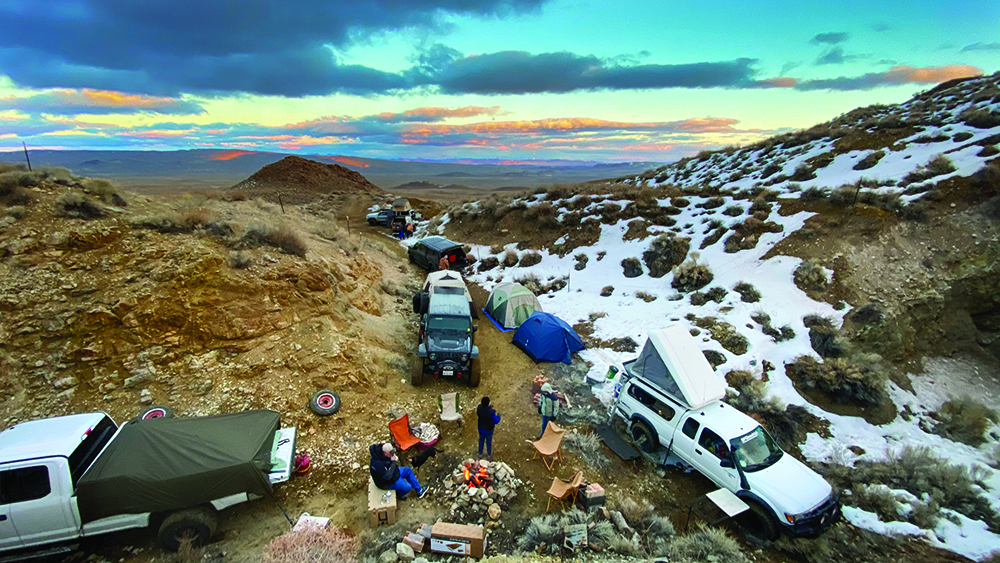 The author and his companions found shelter for the evening camp in a narrow cut in the mountain.

Although we often think of the desert as dry, this area receives a fair amount of precipitation. The problem is that it often all comes at once, and the sandy soil does a poor job of retaining water. The resulting flash floods can transform a dry wash into a raging torrent in a matter of minutes. One had washed away the trail, and we wound our way up on a rough-cut new track.

Stopping for lunch near a decaying core shack, we found thousands of fragmented granite cores extracted from the adjoining hills. We scanned the hillside, finding a honeycomb of mineshafts, precipitous mule trails and evidence of considerable industry.

It was mid-February. Stormy weather was closing in, and temperatures were plummeting.

Threading our way over Coyote Pass, we found refuge from the wind in a narrow defile on the side of the mountain. Shoehorning our rigs in and setting up camp, we stoked a big fire and gathered around. John, who has been a consultant for mining operations the world over, is an encyclopedia of knowledge on earth sciences. His company had recently purchased this mine, the Nightingale, and he shared details on the tungsten booms of the 20th century. 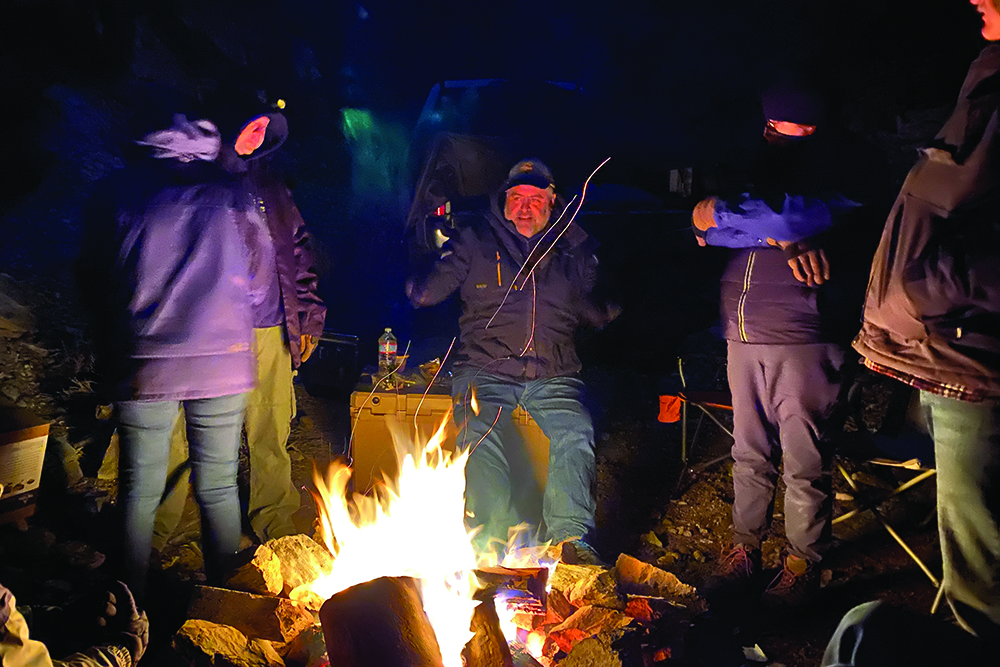 With temperatures dropping into the 20s, everyone huddled close to the fire and shared travel and adventure yarns.

Although we might associate tungsten with light bulb filaments, its physical properties (hardness and a high melting point) make it ideal for industrial tooling and military applications.

World War I was the catalyst for development of the area, but then, the mines were abandoned until the beginning of World War II. They were deserted again as peace settled over the planet and have sat idle since 1956. John’s firm has been re-assessing the Nightingale’s viability as global demand for element #74 increases.

“This region between Lovelock and Winnemucca has been a stronghold for wild mustangs—some of the last vestiges of America’s ‘Wild West.’” 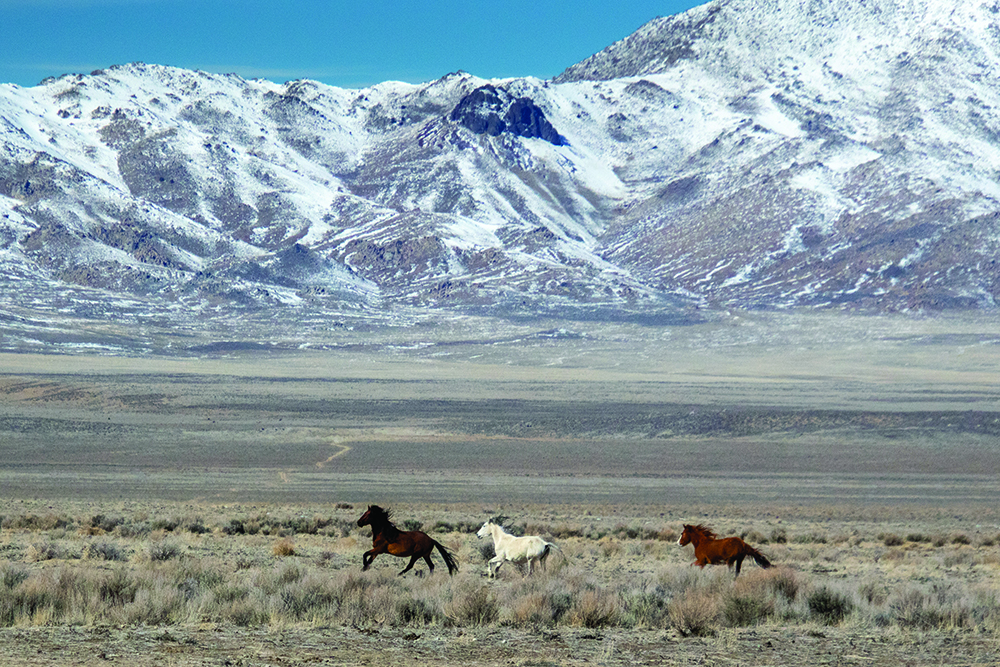 The area between Lovelock and Gerlach, Nevada, is a haven for wild mustangs.

Morning temperatures were in the mid-20s, and the snow was crisp under foot as we followed John into a cut near the top of the mountain. With a pickax, notepad and specimen bags, he chipped away ore samples, labeling and cataloguing their locations while explaining the methods of modern-day treasure hunters. We left John to his work and headed north toward Tunnel Camp, a ghost town rumored to be fairly intact.

This region between Lovelock and Winnemucca has been a stronghold for wild mustangs—some of the last vestiges of America’s “Wild West.” Interestingly, it has long been debated whether horses were indigenous to North America before Europeans arrived in the 15th century. Petroglyphs, such as those on Newspaper Rock, Utah, are said to pre-date Columbus’s voyage. Nevertheless, the Bureau of Land Management has been rounding up local herds to reduce their impact on the land. 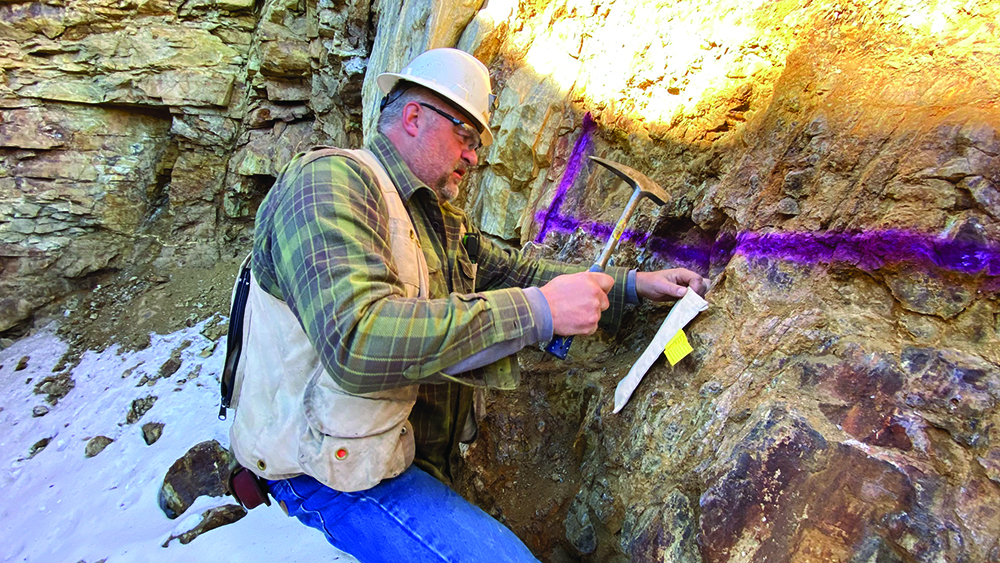 John Mears’s company recently purchased the Nightingale mine, and he explained the complexities of identifying and extracting tungsten from thousands of tons of ore.

Keeping a vigilant eye on the horizon, we threaded a path up the valley, where we found evidence of their presence at both Sage Hen and Stonehouse springs. Moments later, we were rewarded handsomely when 50 or 60 of these magnificent creatures came into view.

We had read about Tunnel Camp, a living ghost town north of Lovelock, and made our way over the Seven Troughs Range, visiting the old homestead at Porter Springs en route. A fun fact about boom-or-bust mining camps is that when one went belly-up, the equipment, mills—and even buildings—were dismantled, packed up and moved to the next big strike. Porter was no exception, because several of its remaining structures had been transplanted from the short-lived town of Vernon. Descending from the summit, we found Tunnel Camp, stopping outside of town at the cemetery.

“Life during this region’s heyday was challenging for all takers. Exposure to the elements was a constant, supplies were scarce, and services were many miles away.” The author’s group spent an afternoon learning about how stamp mills operated, as well as the inevitable demise of Tunnel Camp

Life during this region’s heyday was challenging for all takers. Exposure to the elements was a constant, supplies were scarce, and services were many miles away. Although the voices of those hearty souls have long been silenced, their chronicles can be decoded from weatherworn inscriptions on their tombstones—a deceased mother and her newborn child; a young man lost in a mining accident; and toddler siblings who perished within weeks of each other.

Midway up the mountain in a shallow draw, various structures lined the hillside like the Moai statues standing guard over Easter Island. Beyond a row of decaying wooden shacks, a formidable brick building seemed to be the town’s centerpiece. Behind its tall, paned windows, three rattly diesel generators once provided electricity for the township. Above rested the concrete remains of a smelting plant. On it, a 100-ton ball mill stood proudly over the settlement, entrenched in a century-long battle of survival with Mother Nature. This was Tunnel Camp. 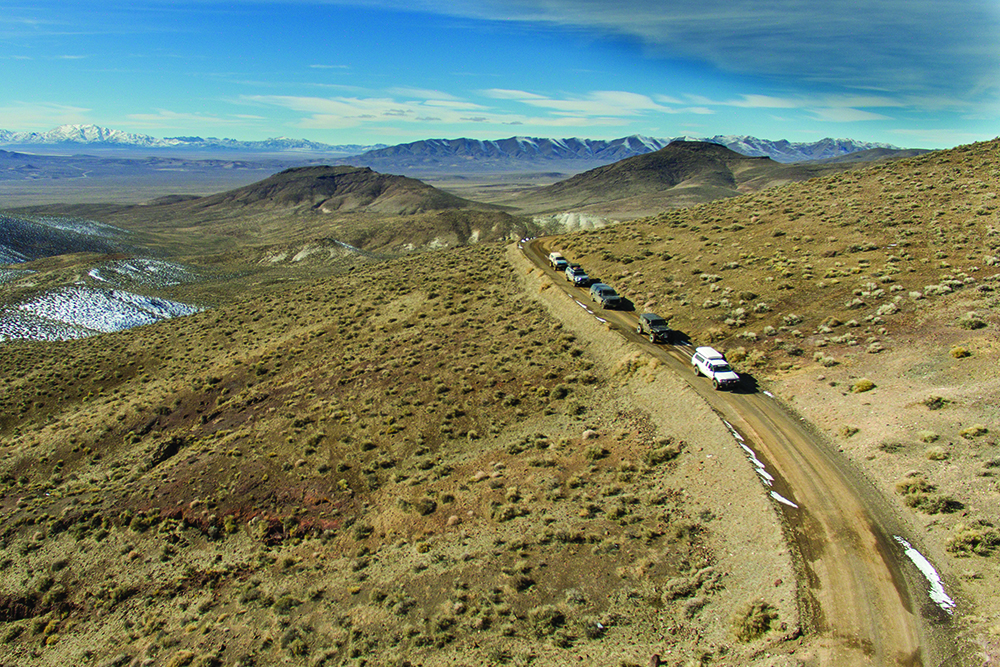 Single file, the author and his group made their way over Seven Troughs Summit en route to Tunnel Camp

The archives tell us that this once-thriving operation ceased when the nearby Coalition Mine flooded and water seeped into the other mines via fissures in the rock. With land at fire sale prices, an entrepreneur named L.A. Friedman acquired most of the mines with the intention of boring a tunnel to drain them. Other speculators invested in the venture, and Tunnel Camp was established. What began as a simple bunkhouse and a dream had developed into the rough-and-tumble town before us. 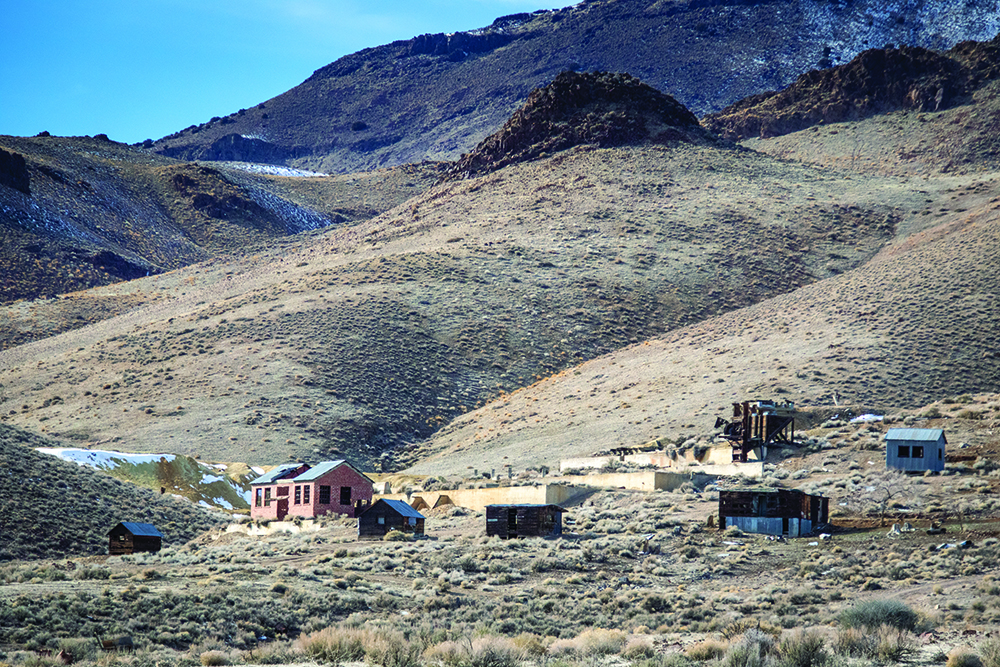 Tunnel Camp, a bustling tungsten mine from the early 20th century, is one of the few preserved ghost towns in northern Nevada.

Giving Up on the Dream

After several years of exhaustive work and extensive capital investment, the tunnel had reached its terminus and the 7,000-foot goal and was complete … at least in theory. But a slight error in trajectory put it 700 feet above the intended target.

As with most mining camps of the era, when the bankroll ran dry or the ore played out, town folk simply packed their belongings and headed for the next get-rich-quick locale.

Late-afternoon shadows were stretching eastward as we made our way down the hill, paying our respects at the cemetery. 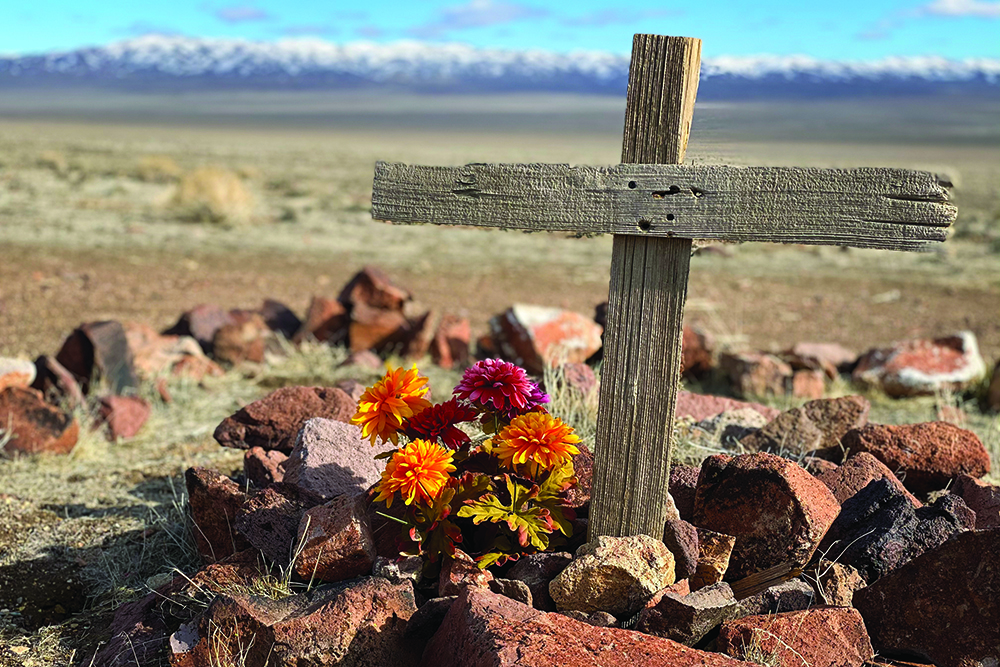 Weathered grave markers in the Tunnel Camp cemetery shared tales of lives in the balance.

Before turning our wheels toward the pavement, I glanced at the map and traced a thin, red line north to Wild Rose Spring, American Flats and Trego. With storied chronicles as compelling and colorful as the MGL, Nightingale and Tunnel Camp, they taunted us to follow that line and ignore obligations such as Monday-morning alarm clocks.

However, these places would have to wait for another day and our next journey into the lives of 20th-century treasure hunters.