→ Submit your rig and win a Tread magazine feature of your truck! ←
Get the Magazine
Features, Jeeps
Text and Photos by Chris Collard 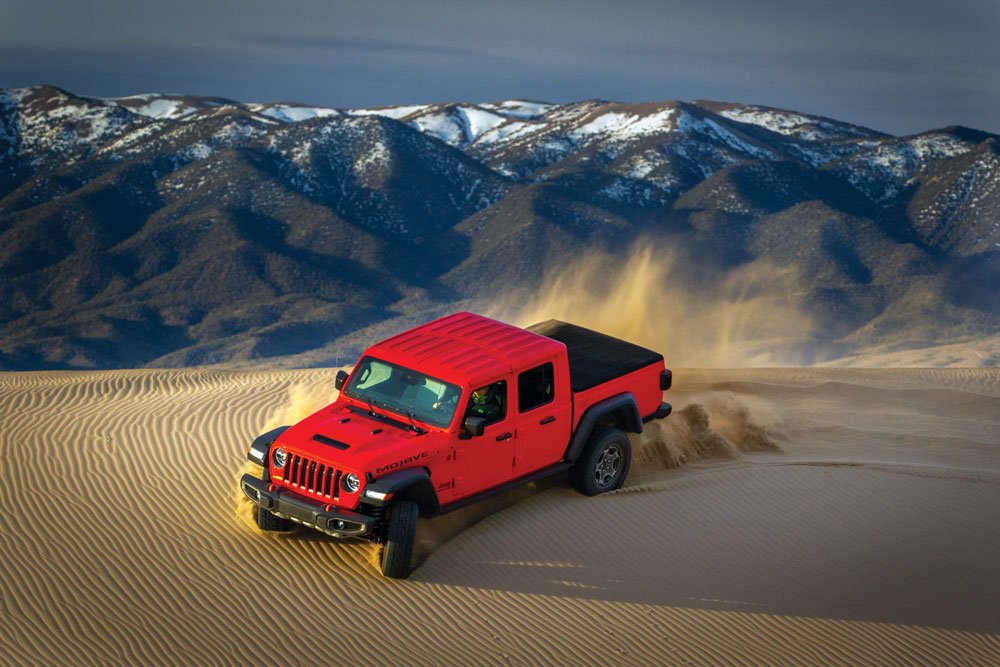 The Jeep Wrangler has set the bar in the off-road world for decades, and its reputation as a capable trail rig is undisputed. But when the Gladiator JT debuted in 2019—the brand’s first pickup in nearly 30 years—it rattled the industry, receiving praise and persecution. The cynics sited its length, wheelbase, and reduced breakover angle simply didn’t fit the bill for serious four-wheeling. But for truck guys like me, a Jeep pickup was long overdue. Comfortable seating for four adults, live axles, a nimble suspension, vetted drivetrain, and room for heaps of gear … what’s not to love? While the Rubicon model is crafted for the rock-crawling crowd and the overland is ideal for adventure seekers, the seven-slot powers-that-be realized the JT might be the perfect platform for dust-loving dirt aficionados who like to go fast in the desert. Enter the Desert Rated Gladiator Mojave.

“BORN TO RUN IN THE DESERT, THE GLADIATOR MOJAVE WAS RIGHT AT HOME IN A SEA OF SAND.”

Having spent thousands of hours in various Jeeps on a multitude of continents and terrains, I was curious as to what differentiated the Gladiator Mojave from the masses. And what is “Desert Rated” all about? To settle the discussion, fellow journalist Ned Bacon and I borrowed a Mojave for a multi-day, 500-mile evaluation through the deserts of Northern Nevada. Between us we’ve raced the Baja and Mexican 1000, tested shocks and suspension systems, crossed the world’s seven continents by four-wheel drive, and have a pretty good feel for what works and what doesn’t. But let’s first examine the platform.

“JEEP DID AN AWESOME JOB WITH THE SUSPENSION, WHICH DOES A SURPRISINGLY GOOD JOB OF MANAGING UNSPRUNG WEIGHT IN THE ROUGH TERRAIN. I’M IMPRESSED.” —NED BACON 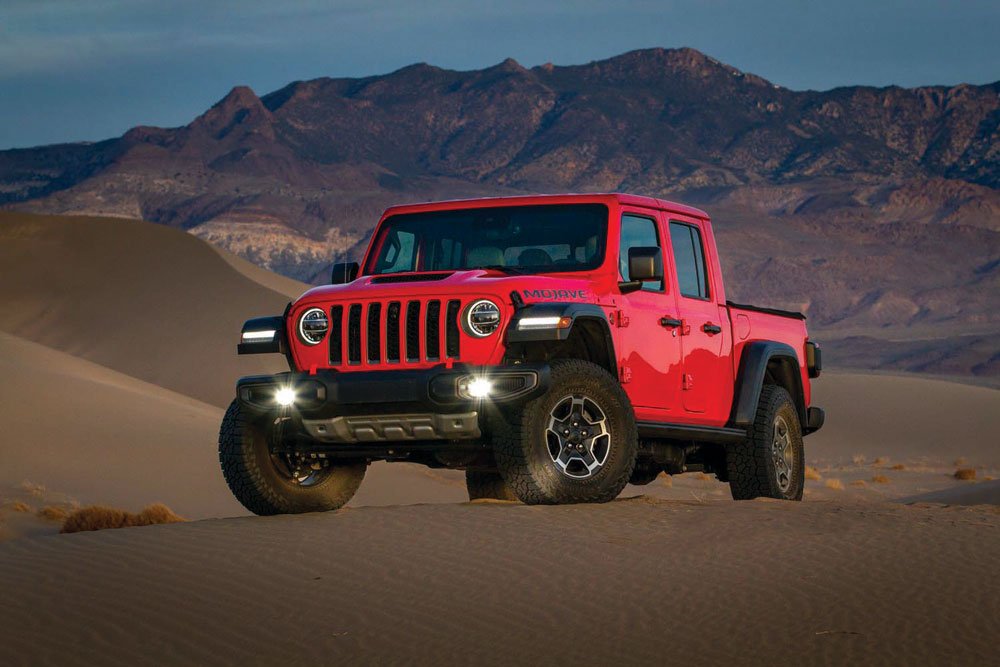 When developing the Gladiator Mojave, Jeep went beyond simply stretching a four-door JL. Working with Ram Trucks, they beefed up the frame, axles, and suspension to improve handling and increased payload and towing capacities. The powertrain remains the venerable 3.6L Pentastar V-6, which produces a respectable 280 hp and 260 lb-ft of torque. Transmission options are a six-speed manual (base) and eight-speed slushbox backed by the CommandTrac NV241 transfer case. Either combination provides a good balance between performance, economy, and off-road prowess.

The interior features all of the amenities we expect from a new Jeep: an ergonomically comfortable cockpit, 80-plus safety systems, Gen IV U-Connect touch screen nav/audio panel, Apple CarPlay, Siri, and plenty of connectivity options and power points. Overall mass was reduced via the use of aluminum doors, fenders, tailgate, and other components, and as is the case with all descendants of the Willys, you can kick the windshield down for a grand view of the world. Pack all this into a four-door pickup and it’s everything a truck guy could ask for. Well, almost everything.

It’s been a long time since Jeep dipped its grille in the go-fast desert scene, so it was a bit of a surprise when they announced Desert Rated badging. The designation indicates a focus on five key attributes: maneuverability, traction, ground clearance, ride control and stability, and desert prowess—a few of which are lofty goals for a live-axle rig think, unsprung weight. The magic of the Mojave is found in its suspension, which is supported by electronics enhancements.

In anticipation of severe duty, track bar diameters were increased and suspension attachment points beefed up. The Mojave’s axles, Gen III Dana 44s, were upgraded as well. The rear is fitted with thicker, 1.25-ton tubes and an electric locking differential (Rubicon variant), and the front received cast-iron steering knuckles. There isn’t a disconnectable sway bar or front locker, which is reasonable for a desert runner.

Interior enhancements are subtle. Climbing behind the wheel you first notice the seats have a sports car feel. Lumbar support, head rests, and more pronounced bolsters and wings tuck your body in place like a cocoon. The leather-wrapped steering wheel rim features raised thumb rests just above the lateral spokes, and Mojave Orange accents run throughout. Toggling through the apps screen we find the forward-facing off-road camera, which provides wing-to-wing view of the bumper and immediate foreground.

Moving onto electronic wizardry, this desert dueler includes a new variant of the brand’s Off-Road Plus mode. Pressing this delightful button modifies transmission shift points, throttle response, and de-tunes the Traction Control system. You can also permanently disengage electronic stability control (ESC), giving the driver full command (and responsibility) of the vehicle without an electronic babysitter overriding his/her judgment. If you’ve had ESC cut power while carving turns on big dunes, you will agree this is a huge safety enhancement. Off-Road Plus will also allow rear locker engagement in high range. This was not available on our test rig, but we are told it will be standard issue in late 2020.

Testing began in a remote dune field south of Tonopah, Nevada, which provided ample opportunity to evaluate the Mojave in its native environment. We immediately noticed that Off-Road Plus rendered the throttle more responsive and raised shift points dramatically. In drive they were spot-on when mashing the happy pedal to the floor. But when taking it easy, the mill still spooled up to about 5,000 rpm before finding the next cog. I’m a manual transmission guy, so sliding the shifter to the left and toggling through the gears was natural— it also allowed me to manage rpm and power to the ground more precisely. With ESC furloughed, carving big turns and high-speed sidehill drifts was a thing of beauty. 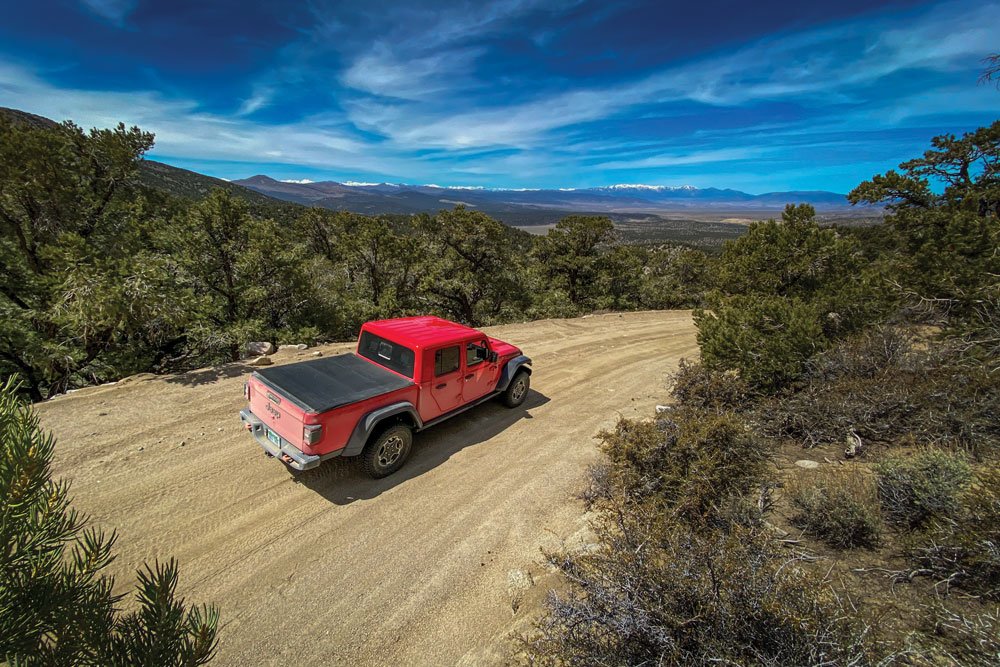 The last leg of our test took us over Sunrise Pass in the Pine Nut Mountains.

Day 2 found us running endless miles of two-tracks through the ghost towns of Nevada’s mining districts. The Fox bypass shocks earned their keep in the realm of yaw damping after hard turns (think emergency lane change). Return-to-neutral cycling was excellent, especially for a live-axle, off-the- shelf vehicle. We also experienced less “head bobbing” as the vehicle rolled left and right; another result of a properly balanced shock/spring combination. 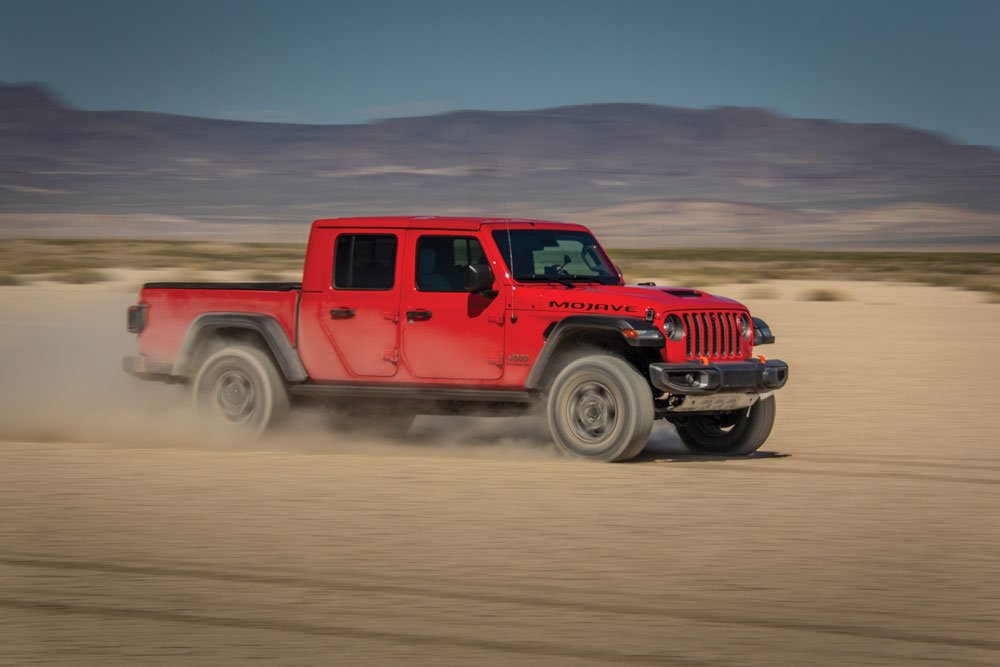 Corrugated roads (low-amplitude, high-velocity conditions) are king when it comes to assessing harshness and thermal buildup. If a shock doesn’t properly control how fluid moves past the piston and valving, the ride will be harsh and associated friction will generate heat. This can lead to cavitation, which will eventually cause the shock to “fade.” After several hours of high-speed two-tracks the shocks were still cool to the touch—another benefit of good valving and remote reservoirs. I don’t think there is a live-axle vehicle made that can match a well-tuned IFS on washboard, but the Gladiator Mojave comes pretty close.

“THE GLADIATOR MOJAVE’S BLEND OF WHEELBASE, WELL-TUNED SUSPENSION, AND ABILITY TO TURN OFF ELECTRONIC NANNIES ALLOWS IT TO GOBBLE UP THE DESERT LIKE A HOT FUDGE SUNDAE … SIMPLY FUN TO DRIVE.” —CHRIS COLLARD 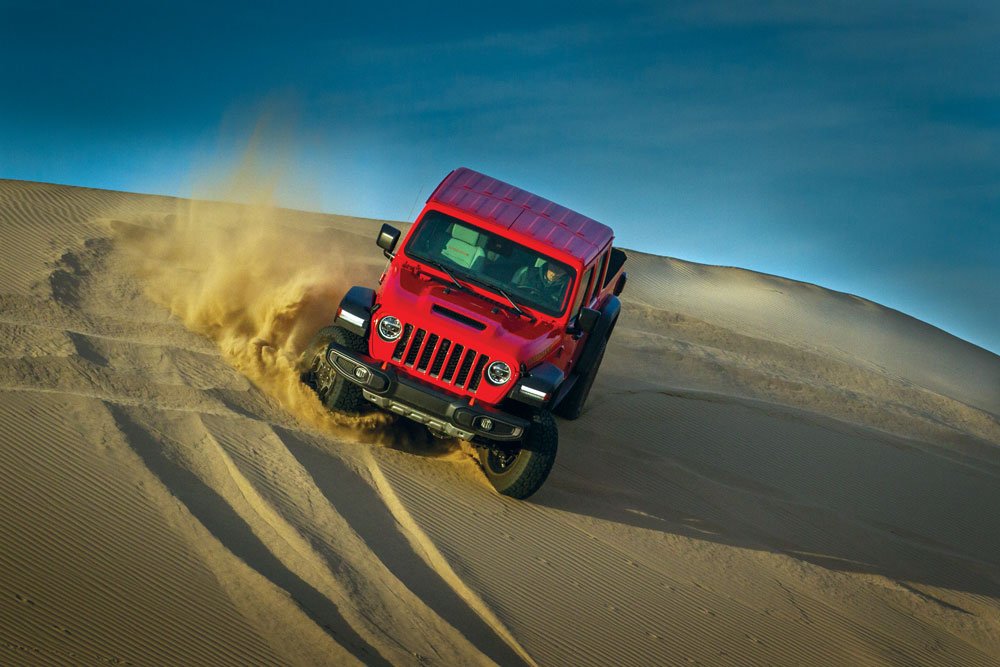 We love the 285hp Pentastar V-6, but next year we are holding out for a Hemi.

General damping—the ability of the shock to absorb impact firmly and rebound under control—was very impressive. In G-out situations (full compression), we could feel the hydraulic bumpstops engage, easing the last 2 inches of travel without feeling we hit a hard bottom. The combination of these attributes lent the Mojave to be very predictable, instill driver confidence, and blast through most terrain without flinching. 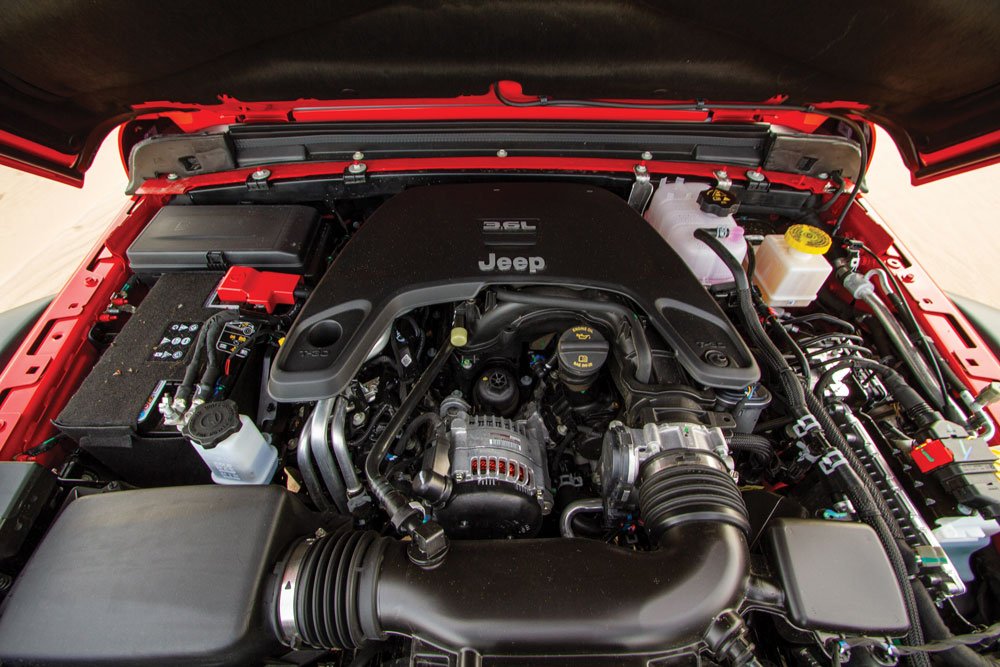 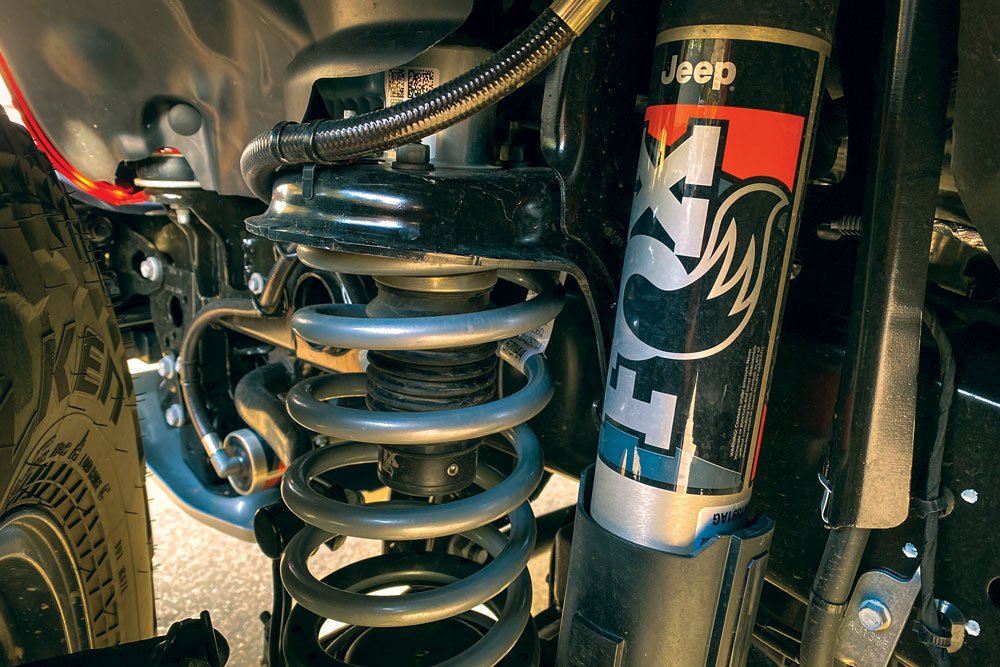 I do have one gripe, maybe two. With the driver side visor rolled out to shield against the afternoon sun, it rattled like a snare drum against the window. A simple clip could eliminate this. The second is more of an industry grievance. I’ve yet to get used to drive-by-wire accelerators. It doesn’t matter what vehicle I’ve driven; they all seem to suffer from jet lag syndrome—the time between when my brain tells my foot to go fast, and when the engine responds to the data. I suppose I need to think faster.

Lastly, more of a wish list item, is the need for a Hemi. I’m a fan of the Pentastar V-6, but when you want to go fast … you want to go fast faster! The Mojave’s 280 hp is ample for most conditions, but there is nothing like the seat-of-your pants feel (and acoustic bliss) of 395 ponies underhood. Come on guys, give us a 5.7.

When the dust settled, we had three days and more than 500 miles of mixed terrain under the tires. Considering this is an off-the-shelf offering, Ned and I were surprisingly impressed, and agreed this new Gladiator Mojave is well deserving of its “Desert Rated” badge. The Mojave gobbled up rough desert tracks like a hot fudge sundae and dove back into the menu for more. It was just plain fun to drive.