Get the Magazine
Features
Text by Kelly Nomura 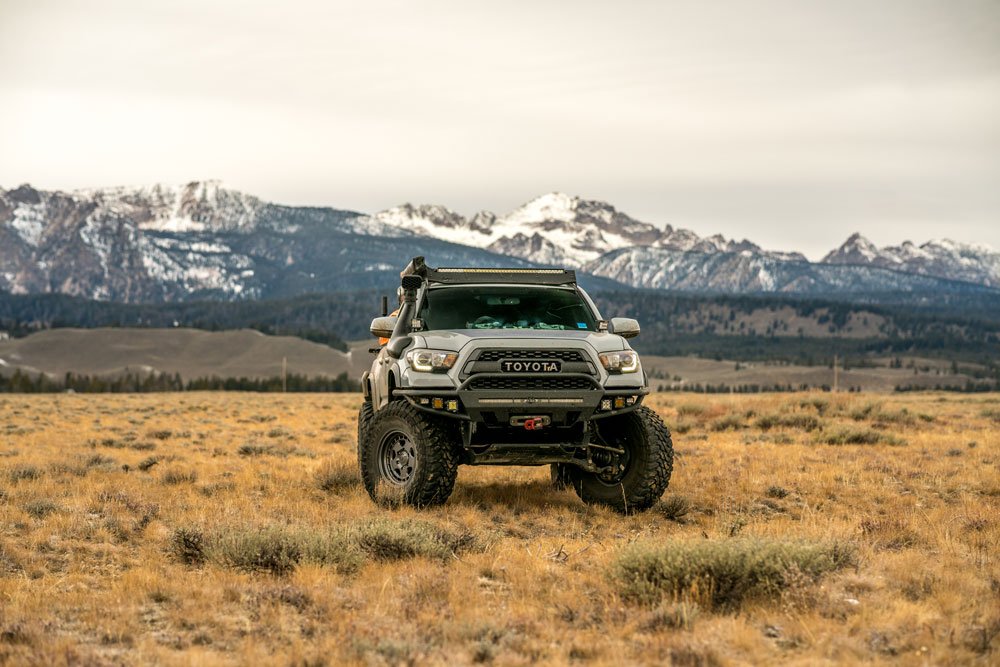 2017 Tacoma TRD Pro Gets All the Things

Three years ago, overlanding and the vehicle adventure lifestyle were new to Malcolm Tweed— but you’d think differently from the look of his Toyota Tacoma TRD Pro, conversations with him about off-roading, and his enthusiasm. Having grown up camping with his father on fishing trips, Tweed yearned to get back out into nature and relive those experiences. After some time deployed while serving in the Navy, he came back to the States with newfound knowledge about a different way of camping and exploring the outdoors. And like many before him and many who will follow, a simple truck purchase turned into much, much more. Inspired by the community via YouTube and Instagram, his new truck would soon take him on many adventures, deepen his relationship with his now-fianceé, Ali, and reunite him with the love of the outdoors. 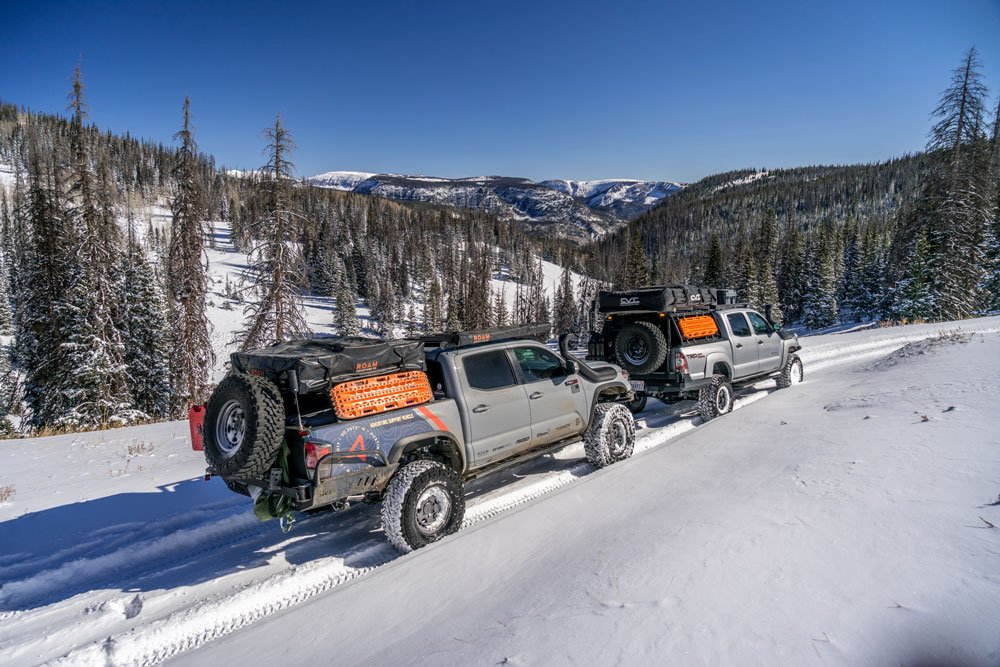 While in the Navy Tweed was stationed in San Diego, but he didn’t get to see much of the city before he was deployed overseas. Not knowing how long he’d be gone, he sold his Volvo and figured he’d get something when he returned. Tweed returned from his deployment in December 2017, nine months later, and needed something to drive. He went to a dealership in Pacific Beach, California, and drove away with this 2017 Tacoma TRD Pro, used with 10,000 miles. A testdrive behind the wheel of the Tacoma TRD Pro and he couldn’t say no; plus he was able to negotiate the cost down to $45,000. He knew he wanted a truck. What he didn’t expect was to buy this truck and change just about everything on it, except for the engine.

“… loving the vehicle you drive is more important than high mileage, so having the Tacoma as his daily driver is not an issue.”

What started as some light online reading when deployed turned into a full-blown lifestyle shift—for the better. Tweed hadn’t seen much of California before he was deployed, so he was looking forward to exploring the state and all it had to offer. This welcomed change of pace kept him wanting to learn more. Through the beauty of the Internet and a desire to learn from others, he let Clay Croft and Xpedition Overland teach him through hours of video watching. He learned how he wanted his vehicle to perform and began taking the steps to make that happen. Tweed doesn’t consider himself an overlander by any means, but he saw an opportunity to transition into a new form of camping while being able to experience off-roading at the same time. He wanted to build a truck that could take him exploring for weeks on end and also be capable of driving on a variety of terrain in various conditions. The outcome is just that and more. Tweed’s Tacoma TRD Pro handles daily driving with ease and flexes its real capabilities when off the pavement. 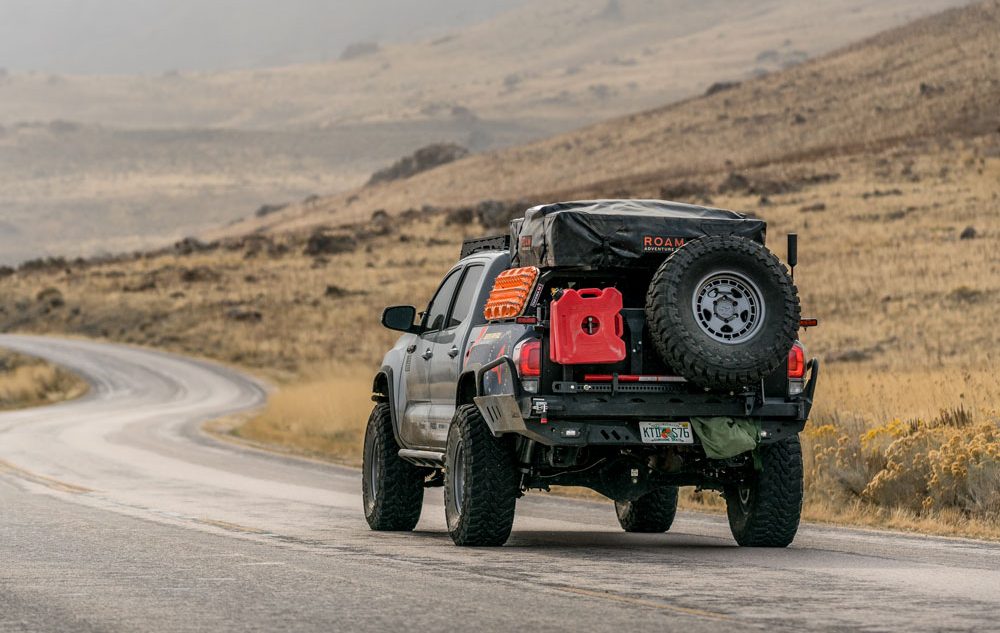 We could stare at that backside all day long. Snow-wheeling in Utah with friends brought the opportunity to use the recovery gear.

Tweed is no stranger to the wrench, or any tool for that matter. As a helicopter mechanic for some time in the Navy, fixing things and tinkering on the Tacoma came naturally—and we’re willing to bet Tweed wouldn’t have trusted anyone else but himself to work on his truck anyhow. He had a few friends help him out with some of the heavy lifting a few times, but he built this Tacoma himself. We can attest to that as we watched him on his Instagram story install a new bumper by himself. The Tacoma has the factory 3.5L V-6 but Tweed noticed that once he added a ton of weight to the truck with all his modifications he needed to do something to create more power. Ultimately, he decided the answer was to re-gear so he went with a 5.29 gear ratio from Nitro Gear. 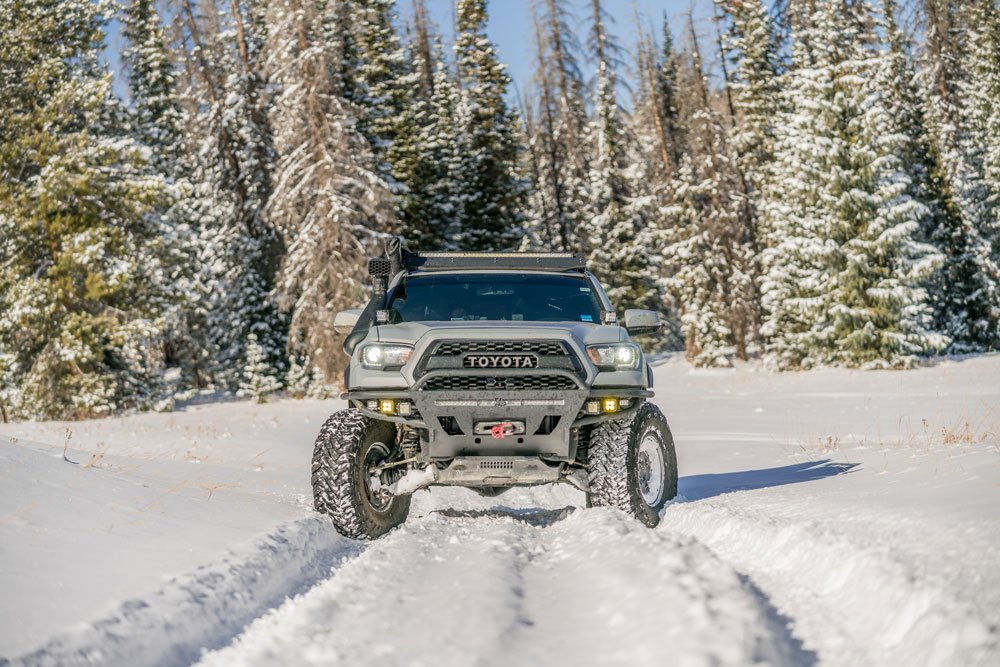 To create a smooth ride on the highway that’s also capable of rocky terrain, Tweed opted for ICON 2.5-inch extended coilovers with 700-pound springs and an external reservoir with adjusters. He also added Total Chaos uniball upper control arms to round out the suspension up front. In the rear are the ICON 2.5-inch double-bypass shocks with Old Man Emu Dakar HD leaf springs. There is also a cab mount relocation to give more clearance.

“All my travels and adventures have been spent with my fianceé and we both have found a love for this style of camping and off-roading.”

Touching the dirt and asphalt are Toyo Tires Open Country M/Ts in 315/75R-16 all the way around with a fullsize spare. Those rugged mud terrains complement the 16-inch fifteen52 Turbomac HD Classics with 0 offset. A fullsize spare sits on the C4 Rear Overland series high-clearance bumper. A little bodywork was performed to make room for the larger tires and still have enough clearance. Fenders and fender flares were trimmed and semi-tubbed wheelwells were added. 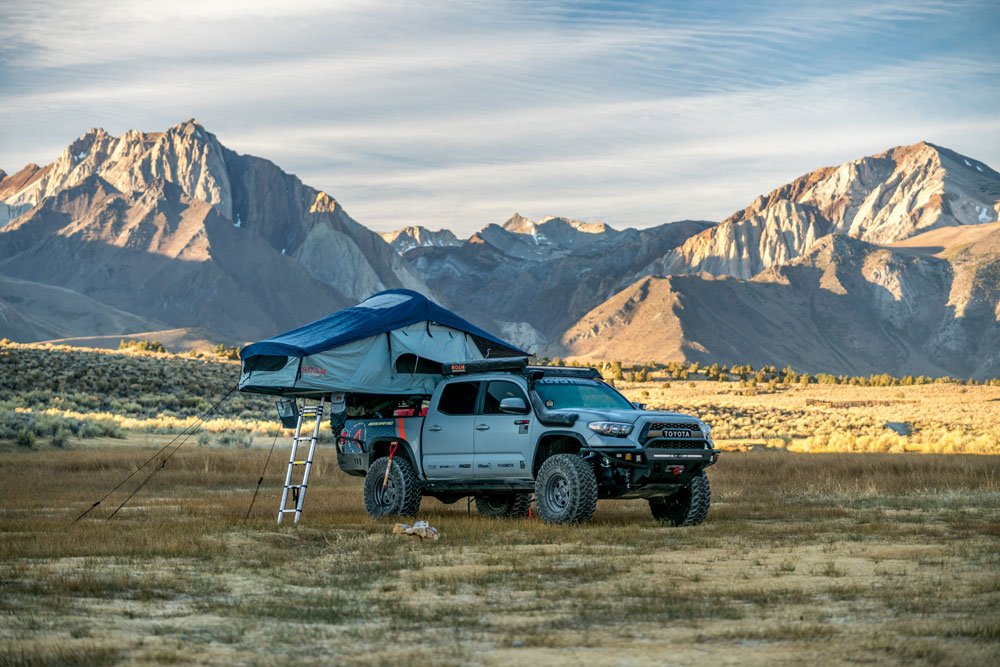 The 21-day excursion across the U.S. from California to Florida brought Tweed and his fianceé many memories that they will cherish.

In fact, C4 Fabrication protects this 2017 Tacoma TRD all the way around from wayward rocks and boulders or anything else that may creep up on it. C4 rock sliders run the sides while the C4 Hybrid series front bumper helps give the front end a clean yet protected look. Tucked behind the bumper is a Warn VR10S Evo Synthetic winch. If there is one thing this truck is lacking, it’s not lighting. The factory headlights were replaced with TacomaBeast sequential turn signal headlights. Up top on the Prinsu roof rack is RIGID Industries SR series 40-inch lightbar and peeking through the bumper is the RIGID Industries 30-inch SAE series lightbar. And the RIGID lights don’t stop there. There are numerous light pods around the vehicle, all RIGID, to light the way when the sun goes down and ensure Tweed is seen out on the trail—our favorite being the RIGID SR-Q Red Rear Chase lights. The chase lights help identify distance on a dusty trail without being too bright to be distracting. 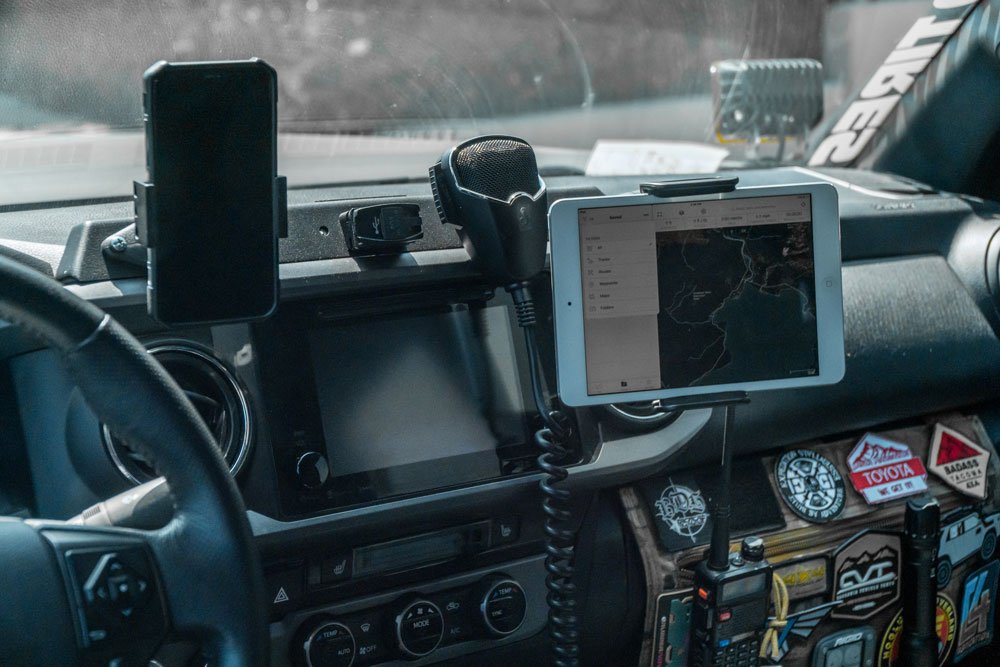 The Expedition Essentials 3TPAM accessory mount keeps his coms organized and iPad at an arm’s reach.

Now, an overland build wouldn’t be complete without an RTT, storage boxes, and an awning. It just so happens that Tweed is also part of Roam Adventure Company, as evidenced by the BeyondWraps vinyl wrap, which sells all of those things. You can’t miss the Roam Adventure Company Vagabond RTT atop the Leitner Designs ACS Bed Rack with Maxtrax mounted to the side. Also, the Roam Adventure Company 5-foot awning provides extra shade on sunny days, mounted on the passenger side of the Prinsu roof rack. Having the roof rack gives Tweed more storage options without being obtrusive in his daily life. Decked Storage System keeps the truckbed organized and tidy and serves as a platform for the Dometic CFX55 fridge.

Up in the cockpit, Tweed keeps things minimal. He has items organized and at an arm’s reach with the Expedition Essentials 3TPAM accessory mount. A BaoFeng handheld HAM radio is his choice for communication with friends when out on the trail. The weBoost Cell Signal Booster, 750-watt inverter, and Roam 95L Rugged Case for storage are the only other interior additions, leaving plenty of room for Tweed and Ali’s belongings, and their dog, Jack. 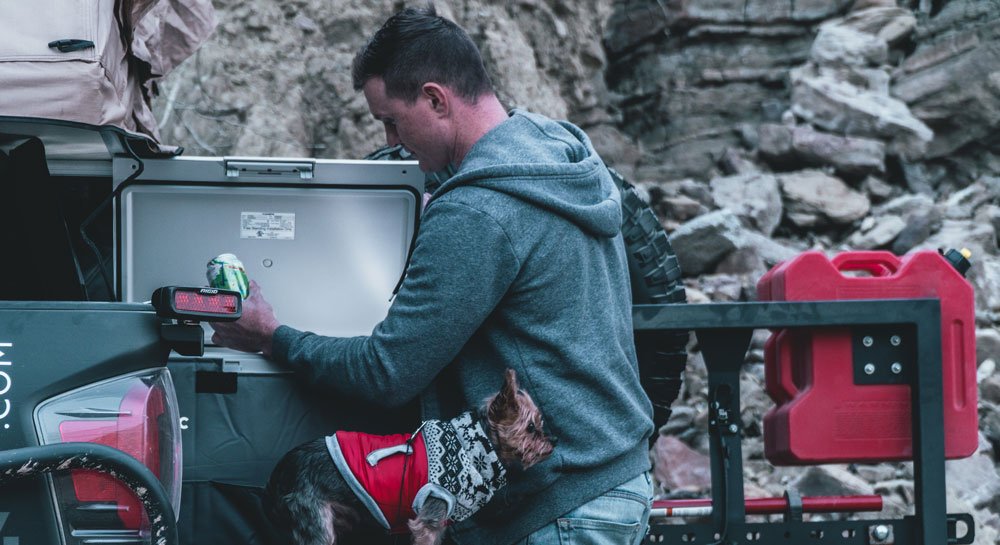 Tweed and Ali have certainly spent their fair share of time in the cabin of that Tacoma TRD. At the end of 2019, they took a 21-day trip from California to Florida where they resettled. For Tweed, his most memorable experiences with the Tacoma are with Ali. They explore together to find new camping locations. Tweed would plan for a week or two, they’d leave the city to go explore new areas, and they would both be so excited to get out there to give it a look to see what was ahead. Tweed says, “All my travels and adventures have been spent with my fianceé and we have both found a love for this style of camping and off-roading.” We could all be so lucky. He goes on to say, “Every trip we take is a new memory for us and this entire experience has brought us extremely close.” Of course, it goes without saying, the most memorable trip so far is their 21-day trip across the U.S. where they explored the mountains in Idaho, experienced several water crossings, and also a spider infestation in the Ozarks. They had it all. 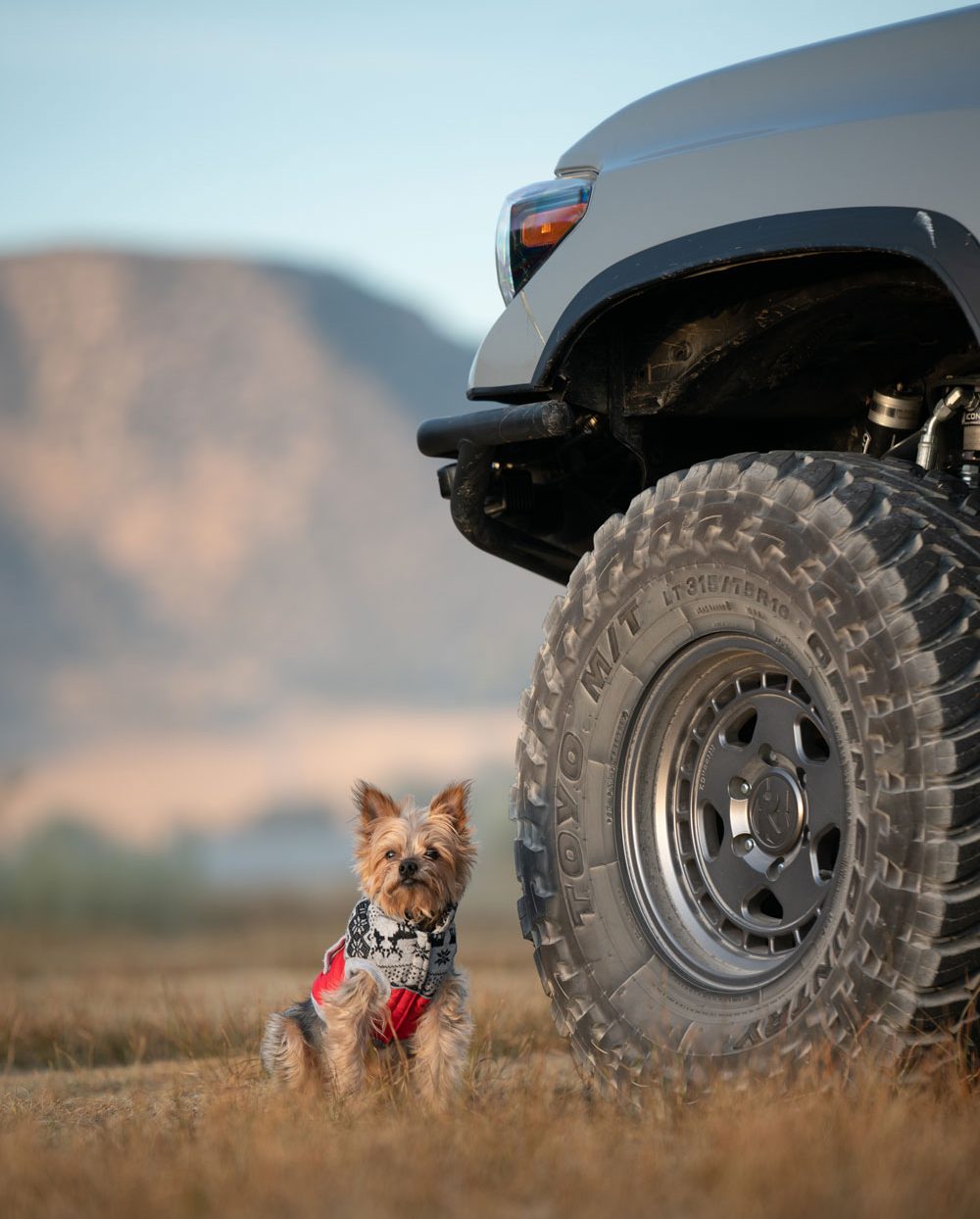 Jack loves the outdoors as much as his parents and accompanies them on their trips.

While Tweed may boast about his Tacoma’s reliability, it doesn’t go without saying that there were some challenges along the way. He had some issues with the 4WD actuators shorting out and also got stuck in the desert alone. But his biggest challenge was getting enough power in order to haul all the weight he added. “The 3.5L engine in the Tacoma is definitely not a powerhouse,” Tweed says, “so it was daunting at first.” But once he changed out the gear ratio in the differentials, the engine was able to regain some power. While it wasn’t difficult to figure out what needed to be done, the time it took to get the ball rolling on fixing it was.

“He wanted to build a truck that could take him exploring for weeks on end and also be capable of driving on a variety of terrain in various conditions.”

If given the opportunity to do it all over, he would shop around more to learn about other models of vehicles for the use he desired. He wouldn’t change anything on the Tacoma build, other than go with a long travel suspension from the very beginning—one of those “if I only knew then what I know now” moments. But there really isn’t anything negative Tweed can say. Toyota gets high accolades from Tweed as he believes the platform is tried-and-true. His Tacoma TRD has never broken down on the trail and even after racking up miles, the drivetrain and transmission are always good.

Nothing beats setting up camp with no one in sight.

Love What You Drive

Tweed is not scared to rack up the miles either. He and Ali drove over 4,000 miles on their 21-day trip across the U.S. He believes that enjoying the vehicle you drive is more important than worrying about high mileage, so having the Tacoma as his daily driver is a non-issue. When we first met Tweed he lived in San Diego. He told us that he drove from San Diego to Big Bear at least 30 times. He exclaimed that he’d drive just about anywhere; he loves driving so distance is never a problem. If he had it his way, Tweed would be doing more trips up to the Sierra Nevadas to Mammoth Lakes, his favorite place to go. “There is so much to explore in that area, from lakes to mountains to meadows. And just east of there is the desert in Death Valley.” That gorgeous and diverse landscape of that part of California really is something else. We share Tweed’s sentiment. “That area has it all and it’s always a great feeling, filled with excitement when I’m packing to head there.” Without any big trips planned, we hope Tweed and Ali make it back out to California soon to explore in their favorite place, and perhaps find somewhere new to adventure. 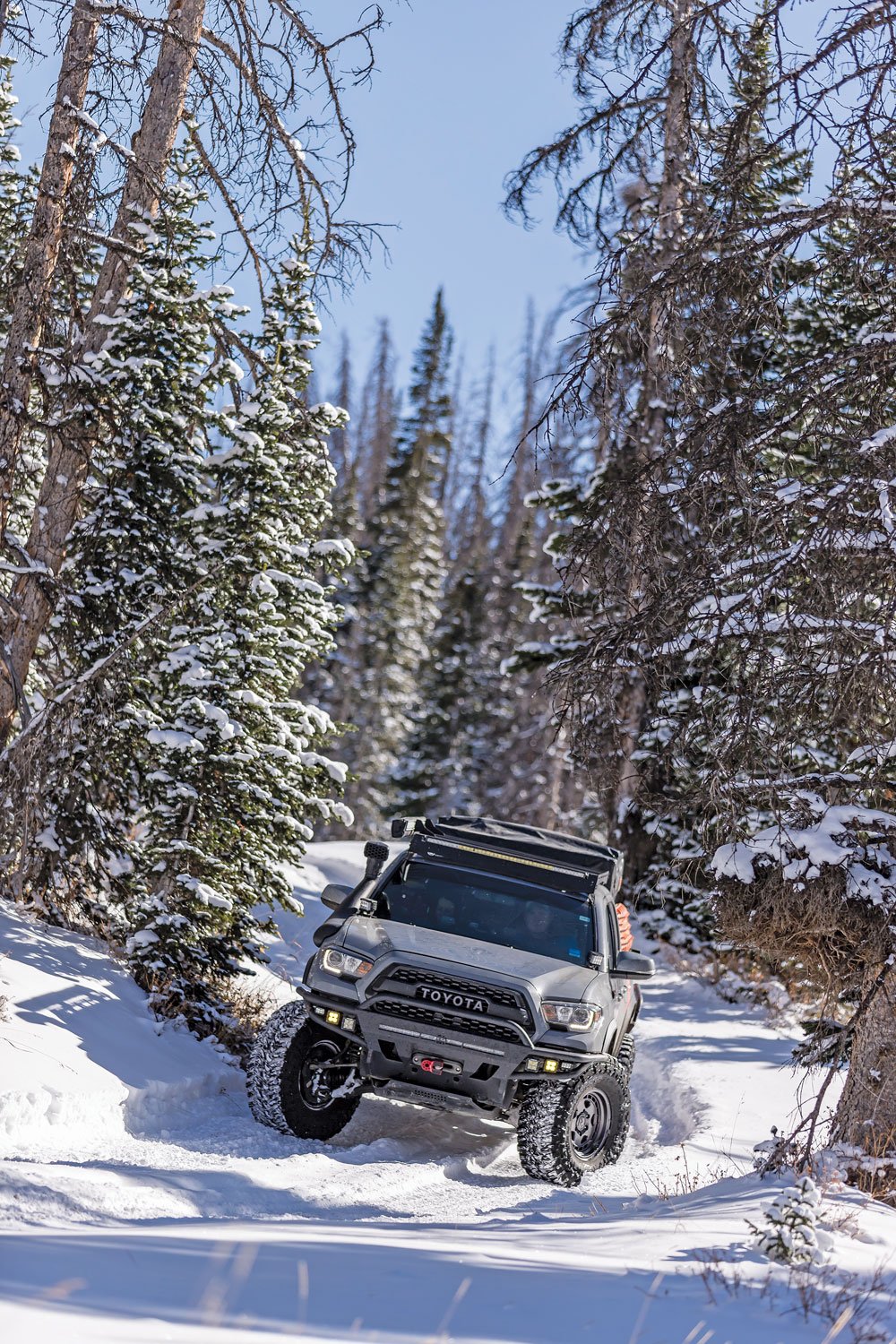 Tweed and his adventure partners, Ali and Jack, love exploring new areas together in the Tacoma. 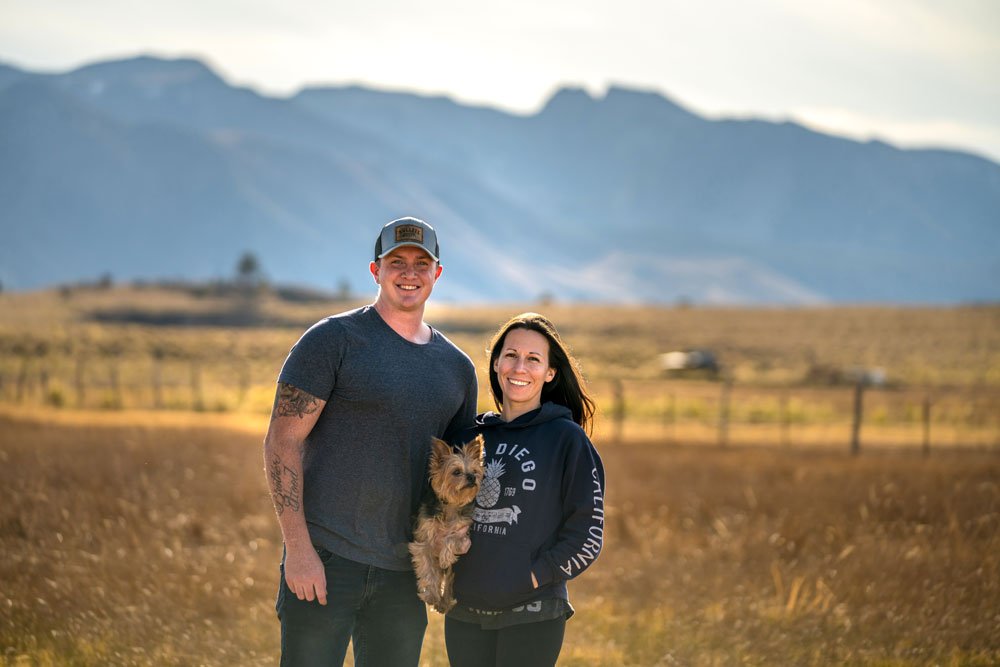