→ Submit your rig and win a Tread magazine feature of your truck! ←
Get the Magazine
Features, Outdoor, Trails & Tales
by
Text by Ashley Giordano
Photos by Richard Giordano

The Backroads of Bolivia 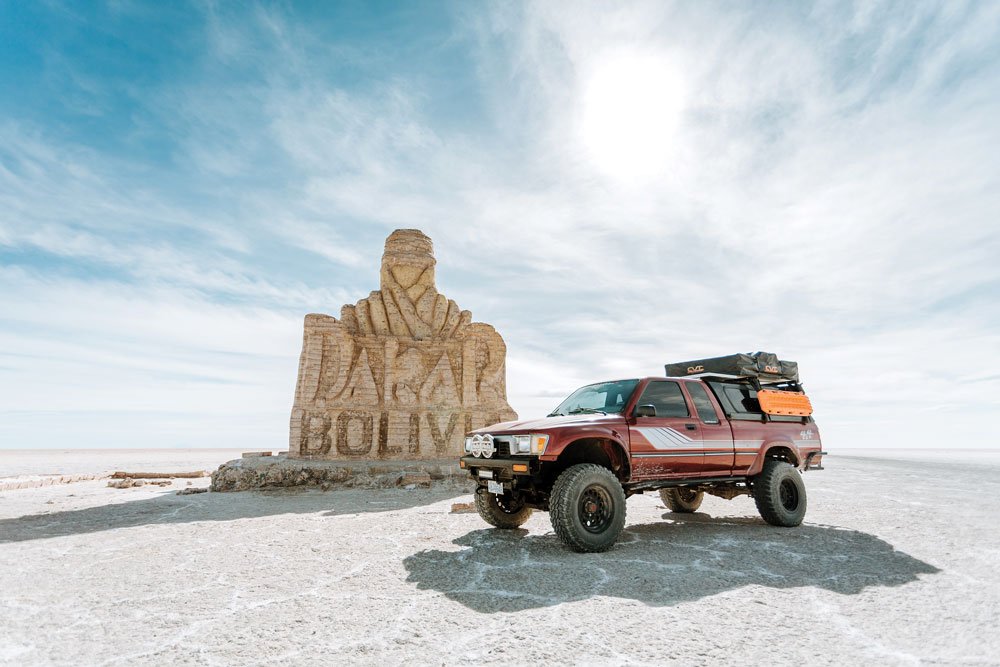 Overlanding the Southwest Circuit in Bolivia

We had been dreaming about Bolivia’s Lagunas Route (also known as the Southwest Circuit) for years. But now it was no longer some distant, wishful destination. It was time to start our truck’s little engine and complete what would most likely be our longest off-road experience in South America.

The Lagunas Route is an unpaved track from Uyuni, Bolivia, to San Pedro de Atacama, Chile. The route winds through soft sand and over bumpy sections of washboard and rocky outcrops located in the Bolivian Altiplano, or high plain. Thus far we had only seen photographs of the route depicting otherworldly and desolate (but beautiful) scenery. Glacial salt lakes shimmered in strange, vivid colors of rusty reds and alien greens. Pink flamingos huddled together in the middle of semi-frozen lakes attempting to conserve body heat in the sub-zero temperatures. It was time to experience the scenes we had only seen in photographs.

We convoyed with two other couples for the duration of the 474km western leg of the route—George and Jenine, driving a Sportsmobile and hailing from San Francisco; and Chris and Mallary, who had driven their 1994 4Runner from Virginia. We joined them with our 1990 Toyota pickup, affectionately nicknamed “Little Red,” which we had driven south from Canada. 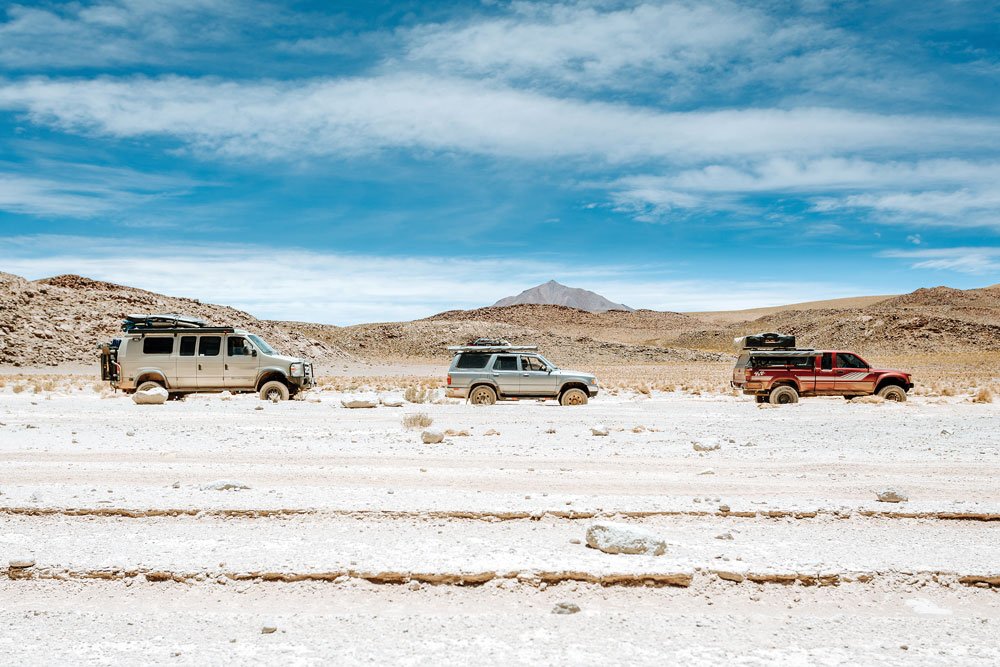 Our North American convoy, hailing from California, Virginia, and Canada.

After depleting our three-day supply of water, food, and cervezas while staked out on the Bolivian salt flats (Salar de Uyuni), we needed to visit the nearest town to stock up. We spent the night at our favorite train cemetery before meandering back into civilization. Showers for everyone! After we were scrubbed clean, we visited a local power washing station to deal with Little Red’s salt-encrusted undercarriage. He growled out of the open-air garage looking brand-spanking shiny, smelling of the corrosion-resistant diesel concoction applied to his nether regions.

“Our calculations indicated that approximately 100 liters of fuel would last us for at least 600 km, taking into consideration both the high altitude and the rougher-than-normal roads.”

One thing we knew for sure—we needed fuel, and lots of it. Our fuel consumption was unusually economical in Bolivia, despite driving at a consistent altitude of over 11,000 feet. Regardless, we purchased a couple of extra jerricans (actually they were random white plastic containers, as they were all we could find in the remote Bolivian towns). These were, of course, in addition to our trusty 20-liter army-green Scepter fuel can that had accompanied us on the trek from the Great White North. Our calculations indicated that approximately 100 liters of fuel would last us for at least 600 km, taking into consideration both the high altitude and the rougher-than-normal roads. 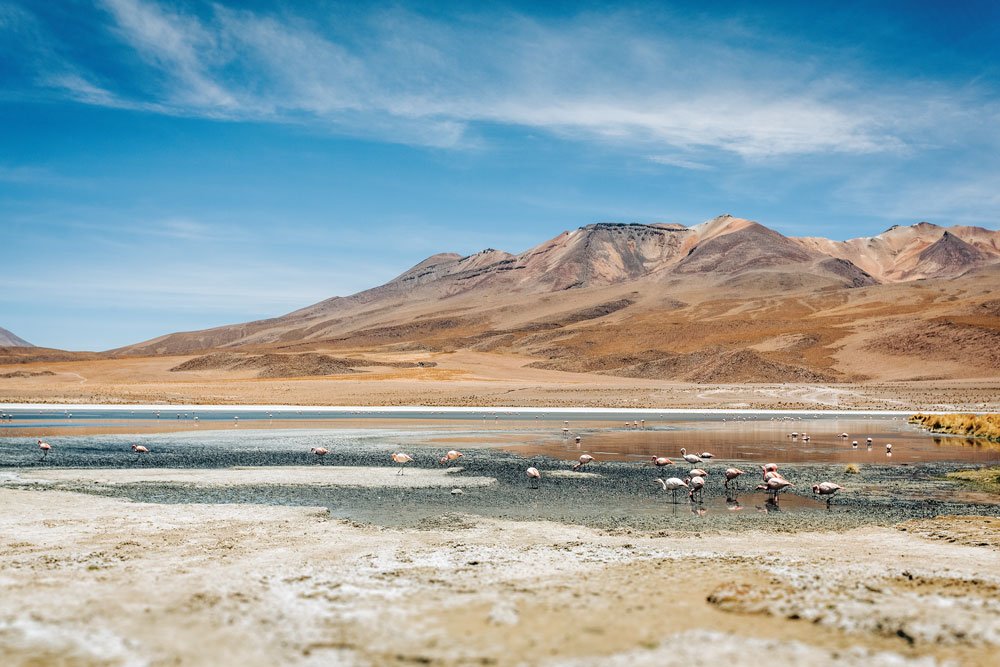 Flamingos fill the high-altitude saltwater lakes located throughout the high plains of Bolivia.

Selling fuel to foreigners is illegal in Bolivia. This can get a bit tricky when you are traveling with a group of six gringos all looking to fill a multitude of fuel containers in addition to their three vehicles. Due to the low gas prices in Bolivia and relatively higher prices in the surrounding countries, the Bolivian government doesn’t want foreigners transporting cheap fuel (about $3.48 Bolivianos = $0.50 USD per liter at the time of writing) out of the country and selling it for a profit. Some gas stations refuse to sell fuel to foreigners altogether. Others sell fuel legitimately at a tourist rate with a mandatory receipt. In some cases, you can negotiate for a lower rate without a receipt.

After being rejected by the attendants at the first gas station we visited, we rolled into the next one. It was like something out of a NASCAR pit stop. “Let’s go, let’s go!” The gas jockeys motioned us toward the pump where 10 gallons’ worth of jerricans were quickly filled, our tanks were filled, and with a flurry of hands the total cost was calculated and cash exchanged. Two and a half minutes later we hit the road. We weren’t going to win the Daytona 500 with that time, but we had the fuel we needed and the attendants didn’t lose their jobs. A win for everyone!

After about an hour of driving on dirt roads, we arrived at the beginning of the Southwest Circuit. Our Dutch friends Peter and Leonie had sent us route details and .gpx tracks months prior and we were finally at the start of those tracks. It was time to rock and roll.

We took the lead on the flat gravel roads, the 4Runner behind us and the Sportsmobile behind them. Twenty minutes later we lost sight of the Sportsmobile. We pulled a U-turn and drove back about 0.5 km, pulling up next to George and Jenine who were parked on the gravel shoulder of the road. Their van was up on a jack, sporting one completely shredded rear tire. George made quick work of the tire change. With no other option, they continued through the remaining
350 km of the route without a spare.

Just before dinnertime we arrived in a rock valley, found a little spot devoid of wind, and set up camp for our first night on the Southwest Circuit. 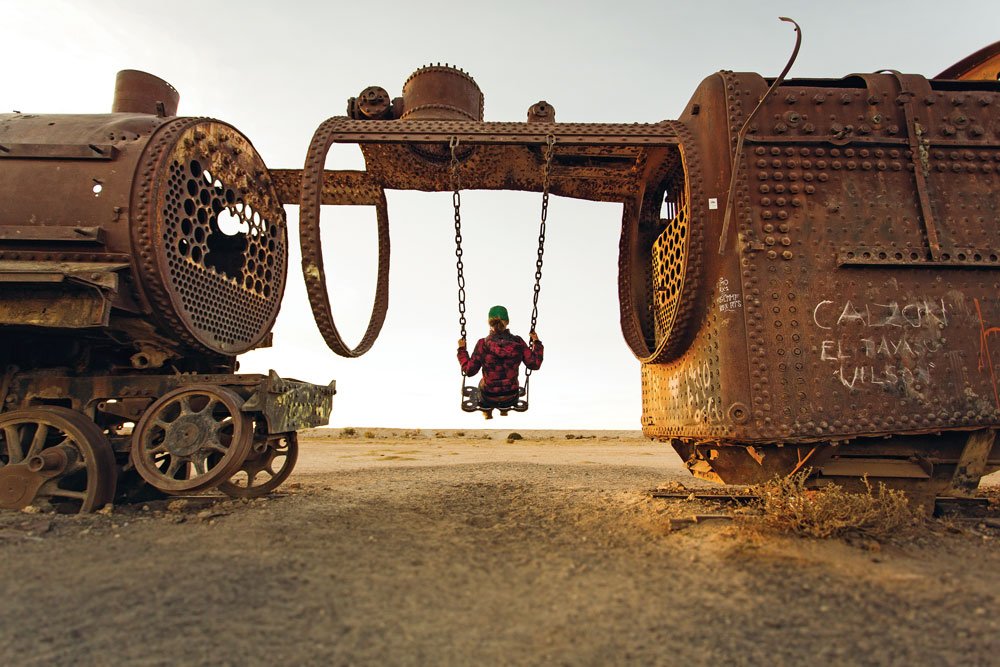 After the mining industry collapsed in Bolivia in the ’40s, many trains were abandoned, resulting in the train cemetery. 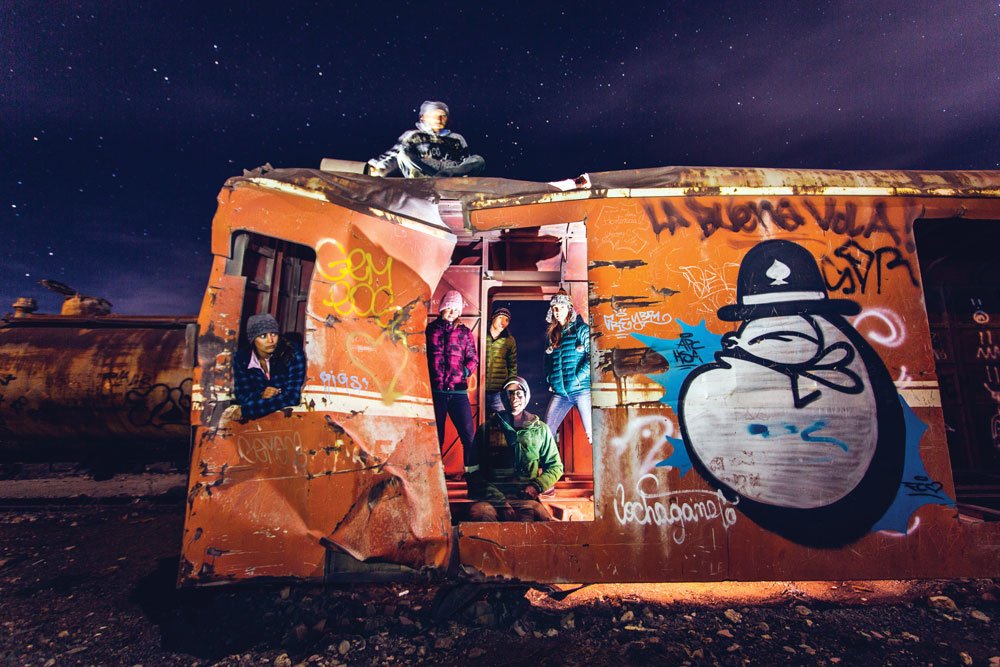 We stayed among the iron wrecks until well after dark, but when we heard footsteps and saw nobody we thought it was time to skedaddle.

The road changed from flat gravel to steep, rocky sections almost immediately. We threw the truck into 4-Lo and started an easy crawl up the first little hill. All of us wondered if the rest of the trip would be a crawl fest—a slow-as-molasses-in-the-middle-of-winter crawl fest. Soon the road flattened, turned into washboard, and then to fast sand. We let the little 22RE four-cylinder sing and made quick work of the sand before the lunch stop at our first high-altitude lake.

Several hours later the name “Lagunas Route” started to make sense, as we arrived at the second of many lakes, Laguna Chulluncani. After some scouting, we found a perfect camp spot. A large outcrop of boulders both concealed us from the main road and shielded our roof top tent (RTT) from the strong winds that were a constant presence in the Bolivian high desert. We also had a great view of the flamingo-filled lake nearby.

“The Lagunas Route is an unpaved track from Uyuni, Bolivia, to San Pedro de Atacama, Chile. The route winds through soft sand and over bumpy sections of washboard and rocky outcrops located in the Bolivian Altiplano, or high plain.”

We set up camp quickly (we were becoming efficient as a group now) and then prepared a potluck dinner. Happy Hour ensued, so we celebrated with cans of Paceñas and Brahmas and sips of the national liquor of Bolivia, Casa Real. But the party didn’t really start until Chris pulled out the Classic iPod with his late-’90s and early-’00s playlist. Ginuwine, Snoop Dogg, and Notorious B.I.G. helped turn the night into a party. The temperature dropped quickly, so we cranked up our 12V heating pad in the RTT and crawled into our sleeping bags while the flamingos flapped and squawked in the chilly laguna. 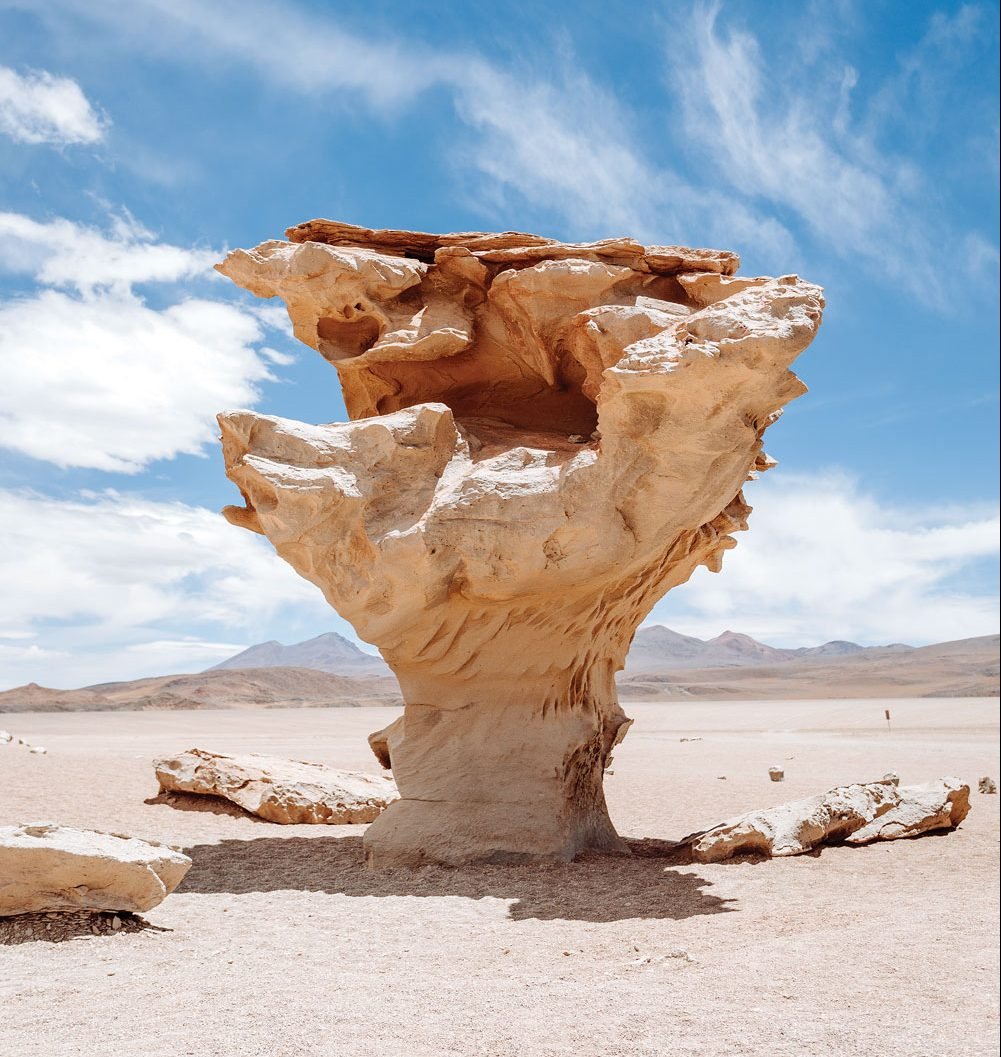 Things get frosty when you’re camping at over 13,000 feet of elevation. We woke up to frozen water bottles in the tent the next morning and the flamingos huddled together in the middle of the lake, looking adorable but, more importantly, attempting to conserve body heat. Fortunately, thin air warms up quickly!

We reluctantly packed up camp and motored south. Before long the landscape was looking very Mars-like. This was appropriate since we were listening to the audiobook The Martian during our drive through the barren landscape.

Eventually we encountered more of the dreaded washboard for short sections. Any vicuñas we sighted stayed clear of our convoy, remaining well in the distance. At one point we even identified a southern viscacha, otherwise known as a Bolivian chinchilla.

That night camp was located in the middle of a small canyon. 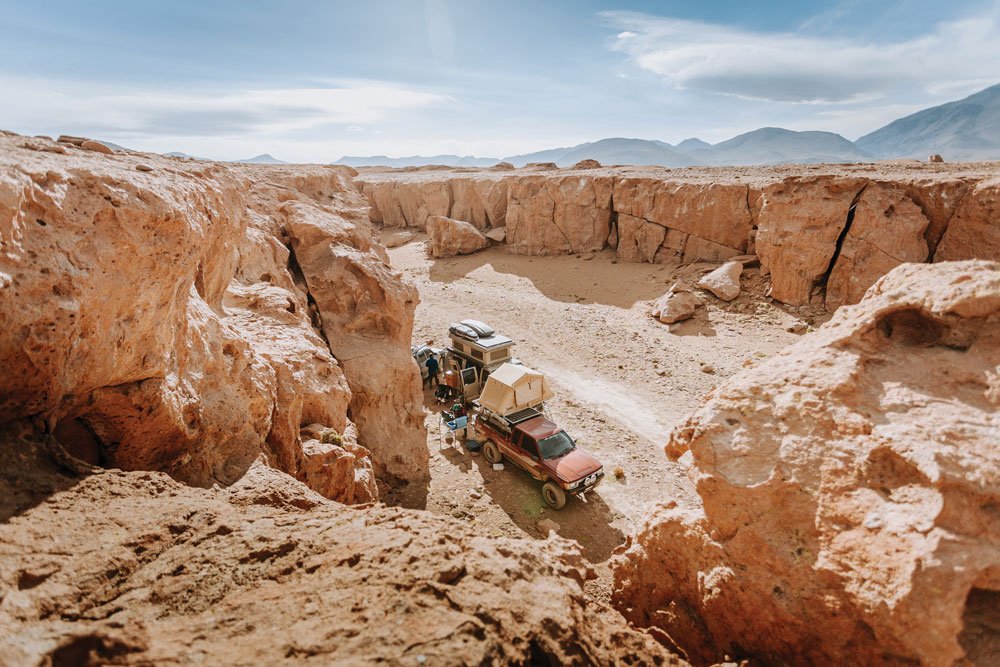 Camping in the canyon helped protect our RTT from strong winds that were ever present in the Bolivian high plains.

6:30 a.m. We parked our three vehicles among 10 Land Cruisers recently driven in by tour operators. Nearby, copious amounts of pungent, sulfury steam billowed behind the vehicles, emanating from large craters in the earth’s crust. Warning signs read: Do Not Approach.

We were at the sulfur springs field, Sol de Mañana, an area of volcanic activity characterized by mud lakes, steam pools, boiling mud, and geysers. Early morning is the best time to visit the geysers as the hot spring water, forcefully ejected from the earth, interacts with the cold air, resulting in incredible steam formations.

Geysers aren’t the only attraction in the area, given the local volcanic activity. Southwest Bolivia is also a great place to take a dip in the natural hot springs. AguasTermales de Polques offered a fantastic view and relaxing soak. The soothing effects of the spring made us somewhat impervious to the fact that a large group of fully clothed French tourists arrived and proceeded to take pictures of us in our bathing suits in the pool. Weird. We’re looking forward to making an appearance in some photo albums back in Europe.

The final task of the day was canceling our temporary vehicle import permit for Bolivia. Despite the fact that the Bolivia-Chile border and immigration office was located about 100 km away, procedure required that we visit the Bolivian aduana first to cancel the permit. Located at a boric acid plant at 5,032 meters (16,509 feet!), we successfully completed the requisite paperwork and headed on our way.

We found a spot on iOverlander called Dalí’s Rocks and blasted out to the desert. Once at camp, we scrounged through our remaining provisions, transforming them into the best American Thanksgiving you can offer with Ratatouille, vegan macaroni and cheese, and a Couscous salad. The wind picked up again so the six of us holed up in the Sportsmobile for a night of more music, cards, and tea (with a generous splash of Casa Real for good measure). 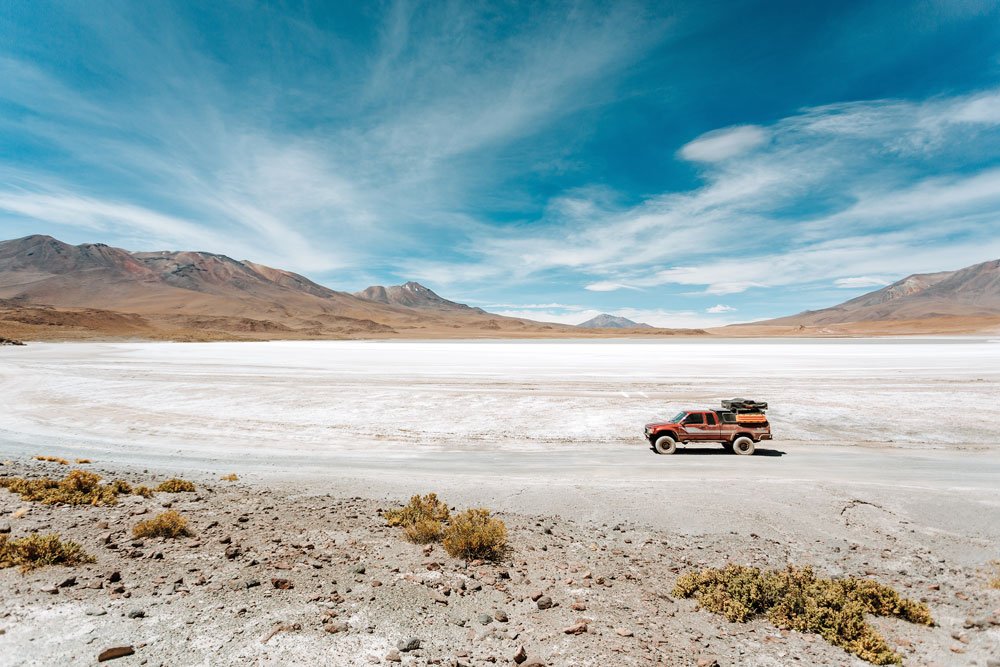 Epic landscapes were ubiquitous during the Southwest Circuit.

About 2 km from the border, Chris and Mallary’s 4Runner stalled. The engine was running but wasn’t responding to any throttle input. Richard poked his head underhood and noticed that the air intake hose had cracked in half. Awesome. We had the proper tools available (proper tools meaning duct tape) and were able to temporarily fix the situation and continue to the border.

Best border crossing ever? Maybe. It definitely took some time to arrive at the little shack in what seemed like the middle of nowhere. Our paperwork in order, we hit the road once again, this time on what felt like the smoothest asphalt of all time. After descending 6,500 feet we arrived in our first Chilean town, San Pedro de Atacama.