The Intersection of Concrete & Overland

The inaugural Adventure Expo, held March 7-8 at the Orange County Fairgrounds in Costa Mesa, California, may at first seem to be an odd location for an overland event, with no true campground on the property. However, this didn’t deter 75 companies who signed up as exhibitors, nor did it dampen the enthusiasm of tens of thousands of Southern Californians eager to learn more about overlanding or to see the newest parts and accessories for their existing rides. 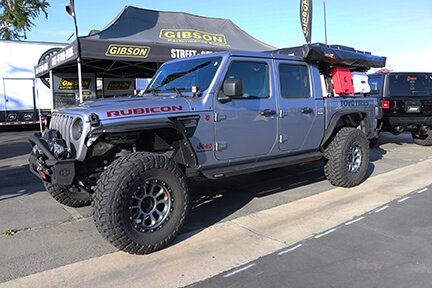 Gladiators were everywhere, including the Gibson booth.

With the sky only partially cloudy, the weather was ideal for those displaying outdoors, and for others inside. A good number of rigs were in the participant section, and for those who didn’t mind being on blacktop instead of dirt or grass, there was even an area for campers. The variety of food trucks and courtyard full of craft beers on tap only added to a weekend filled with joie de vivre. 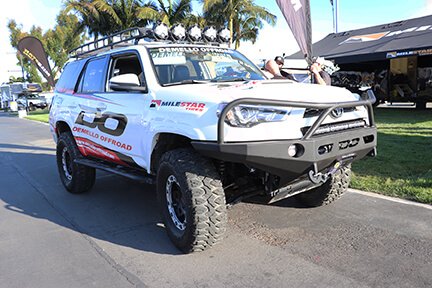 Why, you may ask, is adventure travel becoming so popular among urban dwellers who have to go further to get outdoors? As Sean Angues from Overland Vehicle Systems explained, “These are enthusiasts who work hard all week, and when they have time off [they] want to get away from it all. Overlanding satisfies the need to disconnect, to be surrounded by nature, and to experience life at a much slower pace.”

Industry insider Patrick Wagenbrenner echoed Angues’ sentiments, adding, “I’m not surprised at all by the turnout for this event. You have all the right elements in one place: the right location, an affluent audience, manufacturers that are based here, and the weather cooperated. There are plenty of people who want to experience overlanding and are looking for what they want to buy.”

Is there a difference between Jeepers who go off-roading, those who rock crawl, overlanders in Jeeps, and others who go mudding? According to one expert, there are distinct differences between each group of Jeep enthusiasts, and it depends on how they use their vehicles. Some distinctions can be regional or geographical, comparing the relative flatness of Texas and the Plains states to the Rockies and the deserts of Arizona and California, for example. How each type of Jeep is set up can be discerned visually, and as we found their proponents are as animated about the attributes of their rigs as they are about the kind of wheeling they do.

One of many vehicles in Rebel Off Road’s colors.

Overall, the Adventure Expo brought together a number of different elements, from adventure travel to off-roading, UTVs to rock crawling. While the emphasis here was unquestionably on overlanding, you could see that some vehicles were not equipped for extended travel, which was OK, too. There’s plenty of crossover with all these other types of four-wheeling activities, and a feeling that one supports the other. Clearly, the “off-road nation” is growing, encompassing many different types of vehicles and how they are being used, and aficionados across the board are benefiting from it. 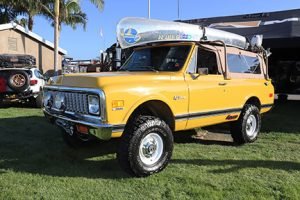 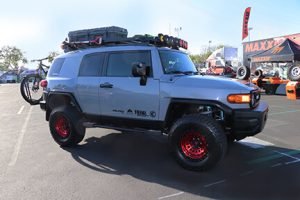 Trucky McTruckFace was there showing off his new additions in the KC Hilites booth. 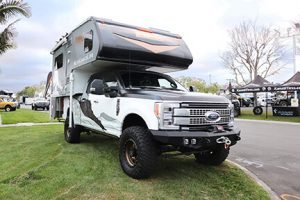 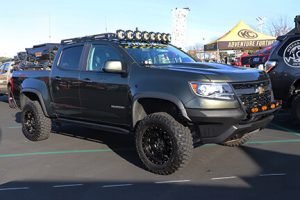 Chevy Colorados are being built more often and worth checking out. 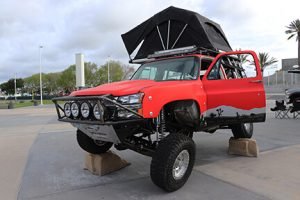 Kenda Tires had their red Trail Blazer out on display.