→ Submit your rig and win a Tread magazine feature of your truck! ←
Get the Magazine
SUVs, Vehicles
Story and Photos by Bryon Dorr 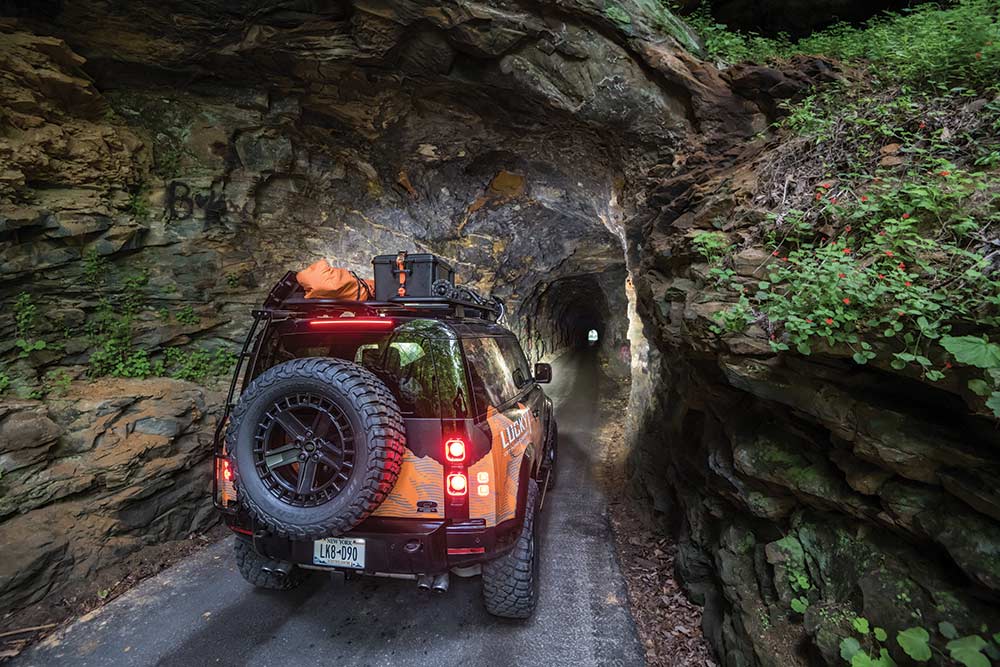 Lucky 8 Off-Road continues to unlock the full potential of modern Land Rover vehicles for proper off-road and overland adventures with Proud Rhino. Its approach to vehicle modification is all about functional upgrades that work in harmony with the OEM vehicle systems and are nearly all reversible to OEM spec. That all sounds easy, but it is anything but to do correctly.

Proud Rhino is Lucky 8’s in-house Land Rover parts brand. The latest build to get the Proud Rhino treatment is this 2022 Defender 90 V8 Carpathian Edition. Justin Monnin, Lucky 8 founder and lead troublemaker, says they “set out to make the Defender to dominate overland trails and class 4 roads, while still being able to play in the rocks at the off-road park before a speed run to Starbucks for a latte.”

A new V8 Defender 90 with all the bells and whistles from the factory, as well as the full Proud Rhino treatment by Lucky8, makes this one of the most comfortable and capable Land Rovers on the planet. Monnin says this might be his forever Land Rover, and he has—and has had—just about every Rover there is to have. 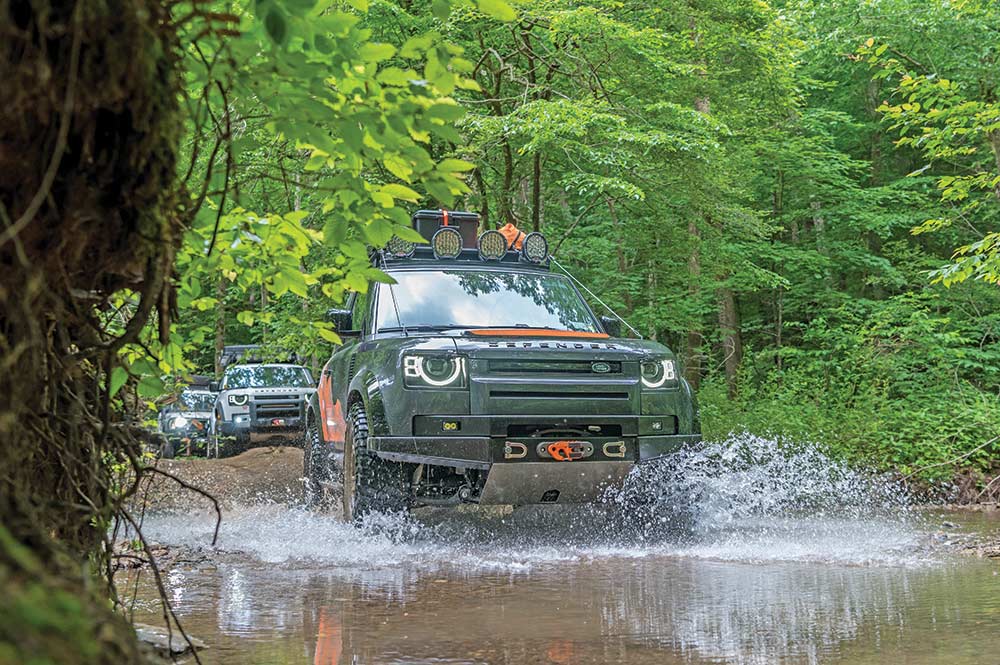 Out on an adventure is where a Land Rover should be used, and Lucky8 does just that with its vehicles.

A Basis For Greatness

This build starts with a $115,000-plus top spec D90. That means it has a 5.0L V8 putting out 518 hp under the hood, good for a sub-5-second 0-to-60-mph time. It also means massive 22-inch wheels with equally massive brake calipers and 15-inch front brake rotors. Inside you get loads of suede and leather and all the latest tech for comfort, safety, and off-road capability.

“…They ‘set out to make the Defender to dominate overland trails and class 4 roads, while still being able to play in the rocks at the off-road park before a speed run to Starbucks for a latte.’”

This spec Land Rover Defender 90 offers up 1,255 pounds of payload capacity, which is important to consider when adding accessories. It also has adjustable air-ride suspension, with  11.5 inches of ground clearance in off-road mode and 8.4 inches in standard height mode.

As with all Lucky 8 Proud Rhino company builds, this new D90 was optioned in a grey paint—Carpathian Grey to be exact—and then wrapped in the orange and black mountain range livery. 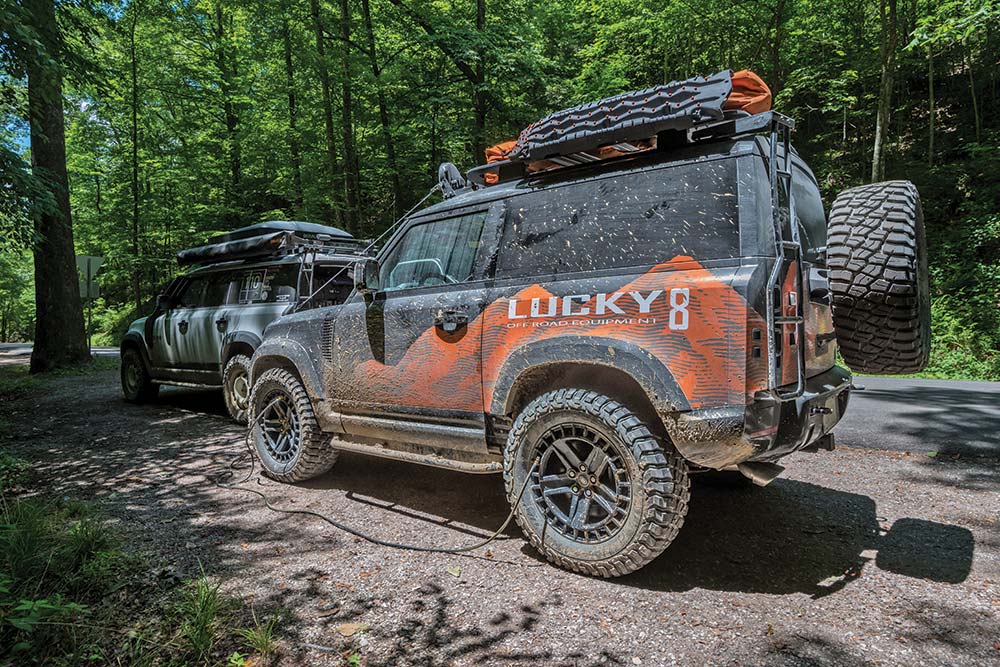 Even on 20-inch rims, 35-inch tires allow for airing up and down to suit trail/road conditions.

With a vision to do everything and be super capable off-road for the build, tires were the first item to figure out. Monnin decided that 35×12.50 BFG KM3 mud-terrains were the best tire for the job. He used that as the starting point to dictate the lift, fender liner modifications, bumpers, and sliders.

“No proper off-road Land Rover would be complete without four large lights on the roof. A Proud Rhino light pod is used to mount four 9-inch ARB Solis LED lights.”

Monnin couldn’t bring himself to change out the beautiful, and massive, Xenon-blue front brake calipers that come on the V8, in order to fit smaller, more off-road appropriate wheels. The best option Monnin found was a 20-inch Redbourn Alston wheel with a 25mm offset. Not ideal for off road, but the best compromise to make everything work, and considerably better than the 22s that come on the truck from the factory.

A small 1.5-inch lift, accomplished with Proud Rhino lift rods, made clearing 35s in the rear of the truck a non-issue. They do rub a bit under full compression, but Lucky8 is working on a ‘SYA’ (Save Your Ass) kit to help with that, like they offer for other modern air suspension Rovers.

The front end was another matter, as anything larger than a 33×10.50 tire takes a lot of work to make fit. This is because the supplementary intercoolers tucked in the front fender wells behind the bumper are in the way. In the past Lucky8 has relocated the coolers forward a little bit and trimmed the bumper, but that would not work for this project, as a full winch bumper was planned. Instead, this required making special brackets and reworking some of the intercooler plumbing. 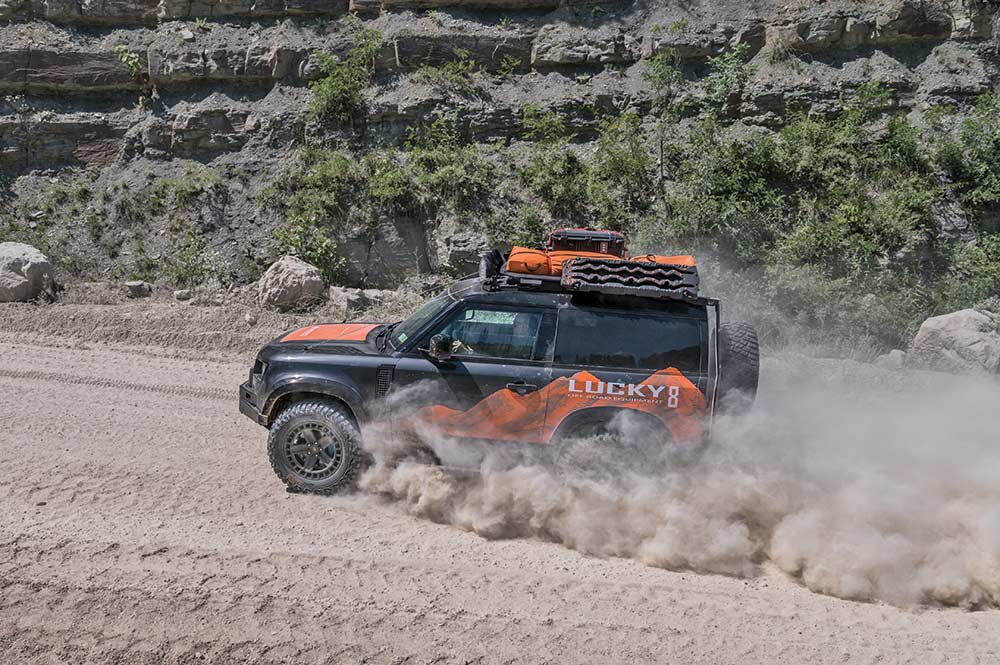 The V8 D90 is not a slow vehicle, on road or off. Even when loaded down and rolling on 35s.

The end result of all that intercooler relocation was the ability to fit 35s and have a cooler compatible slimline winch bumper. The Proud Rhino bumper features a Warn Zeon 10s winch, a Factor55 fairlead and UltraHook, as well as swivel recovery points. It also features a large skid plate that flows into the factory underbody skids.

Next up was the all-important lower body protection provided by sliders. Proud Rhino bolt-on rock sliders act as both impact protection and side steps.

“This spec Land Rover Defender 90 offers up 1,255 pounds of payload capacity, which is important to consider when adding accessories.”

Another unique problem with these new Defenders is the aluminum rear A-arms that tend to get hung up on rocks instead of slide over them. Steel Proud Rhino A-arm sliders were installed that easily glide over trail obstacles. 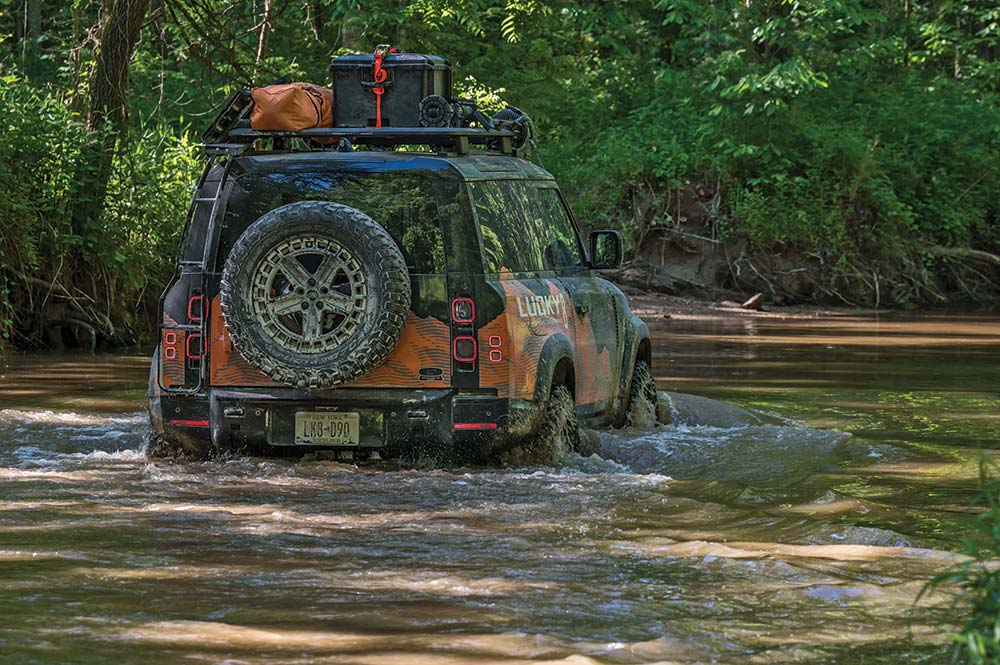 Now that the D90 had the capability and armor improvements sorted, it was time to add functional accessories to make life on the trail and around camp that much easier.

Up top, a factory roof rack is fitted with a set of ARB Tred Pros, a Proud Rhino Aluminum Shovel, an ARB Jack, a Pelican case housing a Starlink internet system, and a Gazelle ground tent. To access all the roof goodies a rear Proud Rhino Ladder was installed.

No proper off-road Land Rover would be complete without four large lights on the roof. A Proud Rhino light pod is used to mount four 9-inch ARB Solis LED lights. To complete the look, and keep branches off the windshield and lights, Proud Rhino Limb Risers are installed from the light pod to brackets that utilize factory mounting points under the hood. Inside, the rear seats have been removed and replaced with a custom mounting plate. On that plate is mounted an ARB Fridge Slide, 12V fridge/freezer, and secure tie down points. Those tie down points are used to secure luggage, ARB camp chairs, a Front Runner camp table, and a Factor55 Recovery Kit. 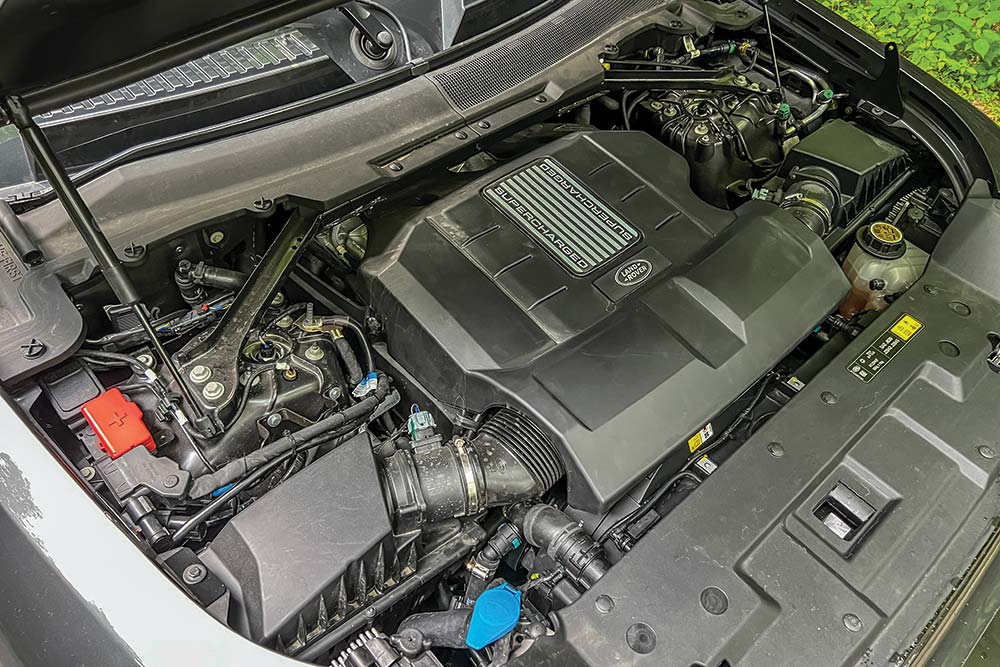 We were lucky enough to join Justin in his new D90 build for its inaugural adventure. We drove the 100-mile Daniel Boone Backcountry Byway in Kentucky. This is a public road route but entails everything from highway to narrow paved backroads and deep muddy steep two track to big boulder climbing. It even has a few solid water crossings and starts and ends with a cool tunnel through a mountain.

At the beginning of this overland adventure, the D90 only had 281 miles on the odometer and the final parts had been installed less than 24 hours earlier. In the past we had brake failures and airbag line leaks that disabled older Land Rovers on the trip, the brand-new D90 never skipped a beat. One plastic lower body cladding popped off—we saved it and it popped back on after the trip—one felt fender liner tore due to a massive stick intrusion, and there was some solid pinstriping in the beautiful new paint. Otherwise, the new Defender came away from the trip unscathed.

All the new parts also worked as intended. The limb risers continually pushed tree limbs up and over the vehicle on tight overgrown sections of the trail. The sliders and skid plates protected the body and undercarriage from rock impacts. The winch helped scale a big boulder without any vehicle damage. The big 35-inch mud-terrains provided the clearance. It also has traction to drive over and through nearly everything we encountered with ease. 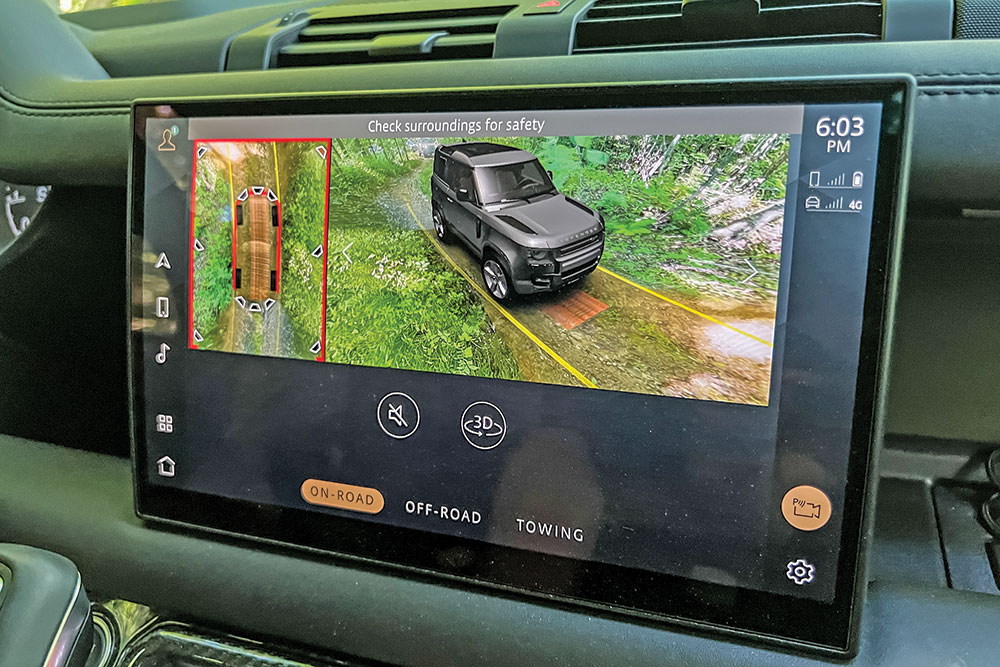 The camera system on the Defender is next level cool, and useful.

Only time will tell if this impressive build stays in the Lucky8 stable long-term. We’re guessing it will unless someone offers Monnin a too big-to-refuse check for it, which isn’t too likely an outcome. These V8 Defenders are extremely hard to come by and won’t be made for much longer. 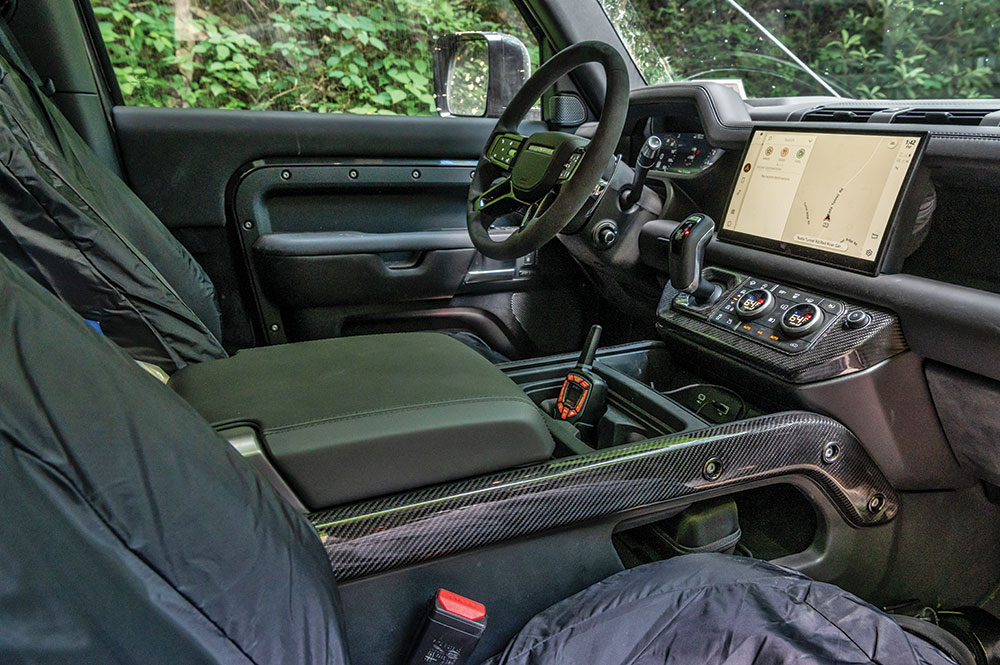 The Defender interior was designed just right, and the Lucky8 carbon trip pieces make it feel even more special and sporty. 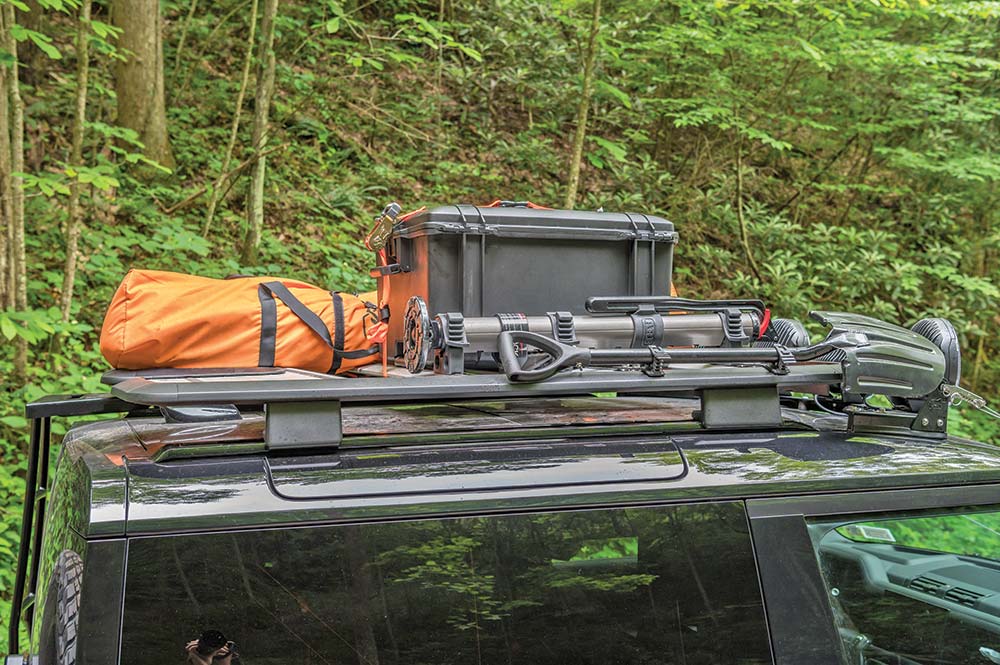 All gear inside is secured down so it is safe for passengers and doesn’t damage the truck. The official water fording depth of the D90 is a class-leading 35 inches, but the lift and tires on this Lucky8 build should be good for at least 41 inches plus. 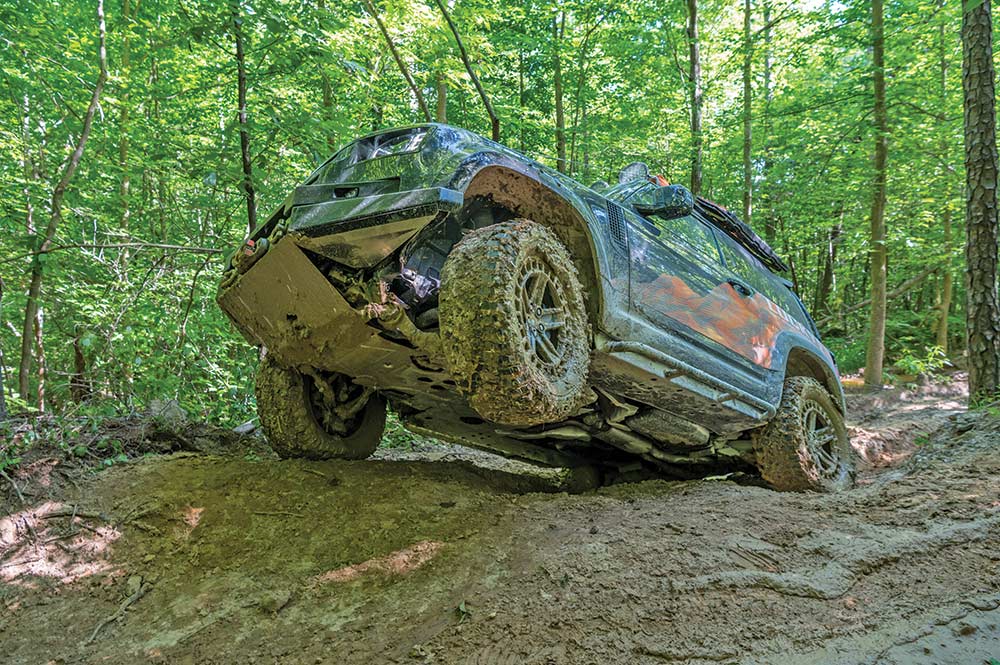 A short wheelbase is great for some situations and not as much for others.