→ Submit your rig and win a Tread magazine feature of your truck! ←
Get the Magazine
Features, Outdoor Adventures, Overlanding
Story by Delia Mo
Photos by Nick Savatgy 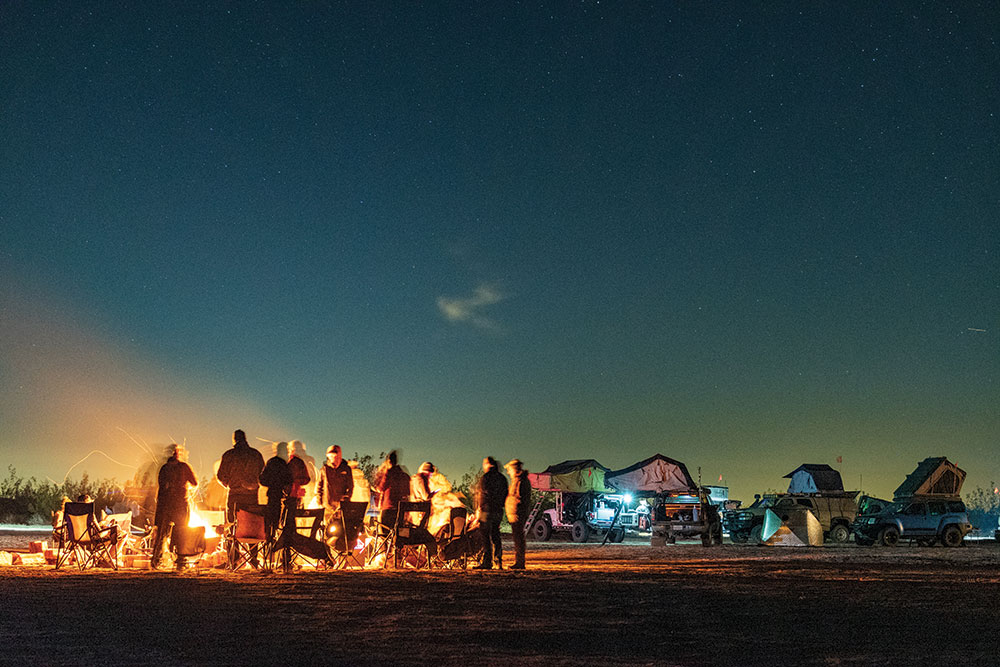 Rogue One leads the pack, making sure all of the roads are passable. Slave One calls into the radio that everything is clear, serving as the last tail gunner who makes sure no one is left behind. Out of the corner of your eye, you see Ghost speeding by, looking for the best area to set up for pictures. You are 1 of 30 vehicles split into 3 groups, following Red Leader, Blue Leader, or Gold Leader. You are traversing 200-plus miles of backcountry roads, stopping at unique points of interest, hanging out with old and new friends, enjoying a potluck, winning in a raffle, and socializing next to epic bonfires every night. This is what you’ll experience on the Rogue Overland Expedition.

What is Rogue Overland? 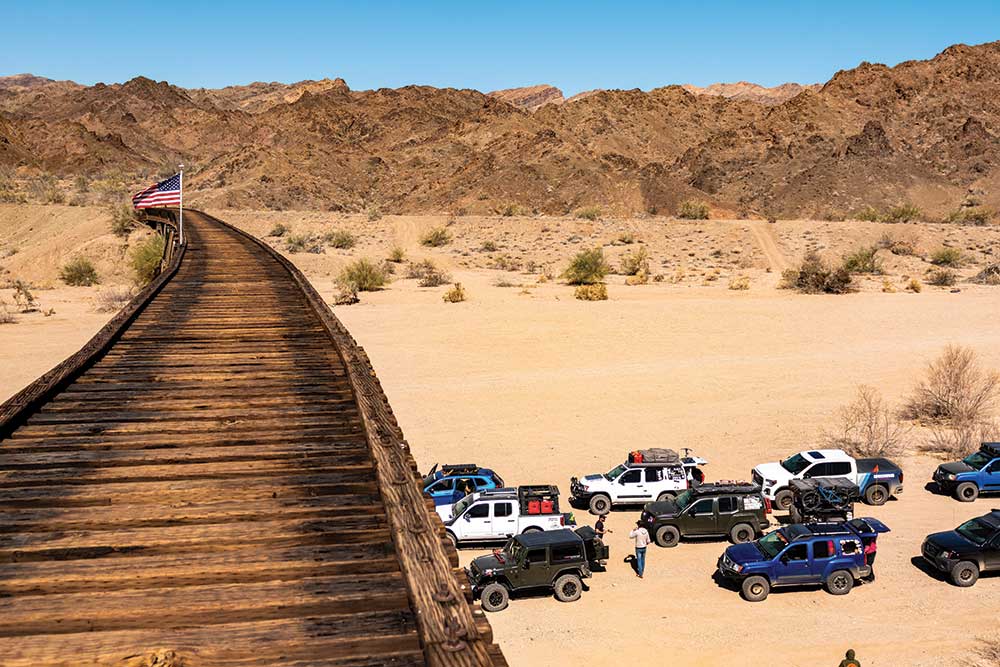 Lunch break at the Trestle Railroad Bridge on the Red Canyon Trail.

Founded in 2016, Rogue Overland is a vehicle-based outdoor adventure company. The company was formed on the founders’ love and passion for exploring the world around them with their family, friends, and vehicles. Known for their built-out Nissan Xterras, the group has amassed a large Nissan following. However, their trips are open to everyone, children and pets alike. Every year the founders choose a unique route to run. Some years were 4×4 only; however, this year they included all-wheel-drive vehicles. This is truly a family-friendly, pet-friendly, and vehicle brand-inclusive event. In January 2017, they had their inaugural expedition with just 12 overland rigs. The event continues to garner interest within the overland and off-road community and has grown yearly, with this year being the largest to date. A beautiful sunset at camp in the USAF Barry M. Goldwater Range framed the end to a great day.

On February 24, 2022, the 6th annual Rogue Overland Expedition began. Thirty overland rigs congregated in the parking lot of the General Patton Museum, in Chiriaco Summit, California, to begin a three-day trip, exploring southeast California and the western Arizona deserts. If you looked at the itinerary, you may wonder how one is able to cover so much ground in three days, let alone lead a group of 30 vehicles. The goal of the expedition is to see as much as possible in the limited time given. Mornings usually start at 8 a.m. with a driver’s meeting to go over the itinerary and what is expected of everyone that day. If you’re not a morning person, don’t let this deter you from attending. It is definitely worth participating, just be sure to bring a lot of coffee and/or energy drinks. 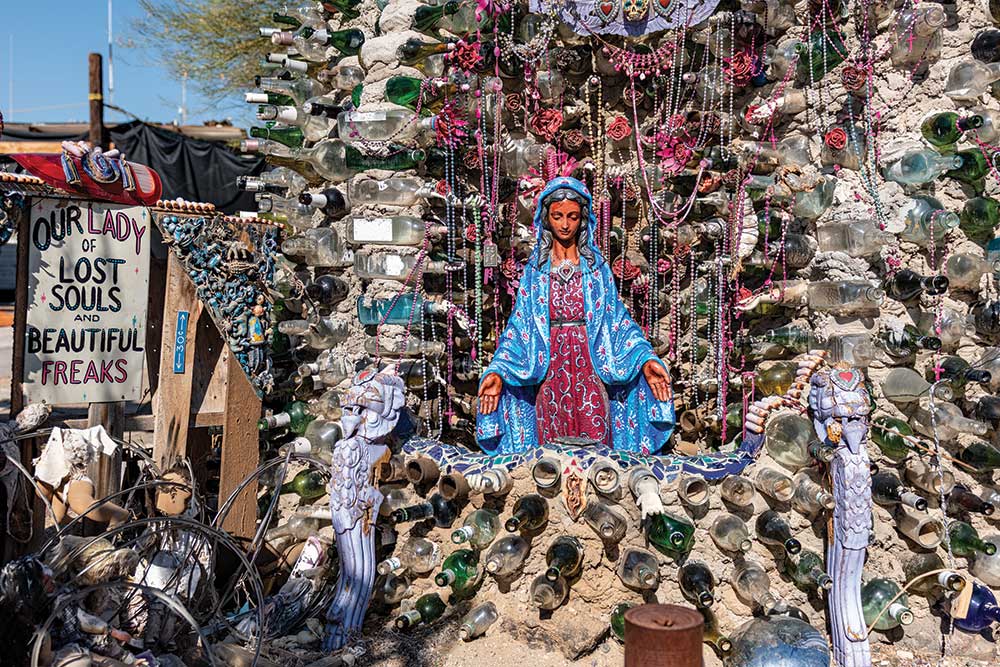 We traveled on the Red Canyon Trail to Eagle Mountain. We stopped at the Trestle Railroad Bridge for lunch, and from there, we headed to East Jesus and Salvation Mountain, both located in Slab City, California. Slab City is an off-the-grid, alternative-lifestyle community. It’s made up of people that don’t want to live within mainstream society. East Jesus is an eclectic art installation made by the residents of Slab City. As you enter the place, you will see what one would say is garbage, but the expressive individuals in this community have transformed this “garbage” into abstract pieces of wonder. As you walk around the gallery, you truly see how beauty is in the eye of the beholder.

Salvation Mountain greets you as you come in and out of Slab City. It is a large and colorful man-made mountain dedicated to the creator’s religious beliefs. What started out as a small mound in 1984 has grown to 50 feet high and spread 150 feet across the desert. It is made mostly of adobe, clay, and paint. If you’re planning to visit Slab City, you can’t miss Salvation Mountain (literally). 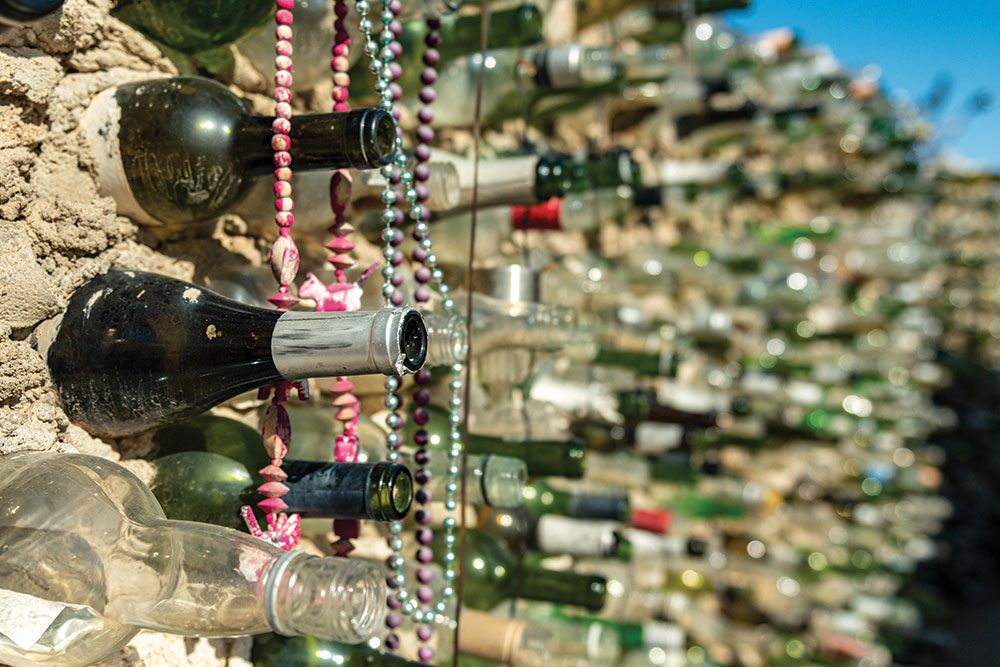 The last stop of the day and the campsite for the night was at Imperial (Glamis) Sand Dunes, the largest OHV sand dunes in the United States. Everyone was excited to get out onto the dunes and drift along the sand berms. The sand can be very fun to drive on, but you also need to be careful. A rule of thumb for a smooth ride is to air down your tires between 8 and15 pounds. One of the first vehicles to get stuck was a stock Ford Bronco. We connected a Bubba Rope Recovery Rope and Gator-Jaw soft shackle to a Nissan Xterra to pull him out.

However, that was just the beginning. When the sun went down, things started to take a turn for the worse. Lines were harder to see, and vehicles were getting stuck left and right. A Nissan Frontier tried to help a Nissan Xterra that was stuck, but ended up getting stuck himself. A Jeep got stuck trying to drive up to a ridge and ended up burying one side of his vehicle into the sand, leaving him in a vulnerable situation. Have no fear, experienced people were on-hand to help recover. We tied a kinetic rope from an Xterra to the Jeep for safety and hooked a winch from an FJ Cruiser to pull the Jeep upright to a driveable stance. Once we got everyone safe and secure, we eventually made our way back to camp to settle in for the night. 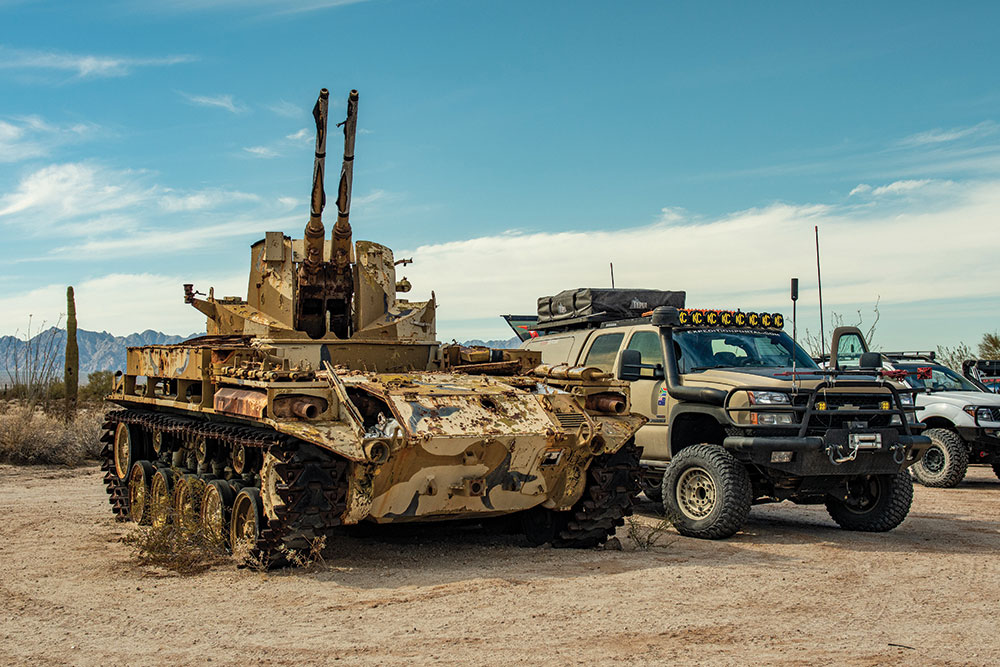 The Chevy Duramax poses next to one of the many obsolete tanks used for target practice by the U.S. Air Force at the Barry M. Goldwater Range.

History of the Desert

We traveled from Imperial Sand Dunes, crossing into Arizona, to the United States Air Force Barry M. Goldwater Range. We stopped for lunch surrounded by tanks used for target training by Air Force pilots. Everyone took the opportunity to climb on and take pictures with these tanks. Because…why not? We also stopped at two plane crash sites along the way. Both crashes were fighter jets that had a failure during flight training, and the pilots had to emergency eject from the aircraft. Thankfully, both pilots survived; unfortunately, the same can’t be said about their jets. However, now there’s pieces of history for people to find in the middle of the desert. Old friends, like these Rebelle Rally participants, and new acquaintences meet up each year for the Rogue Overland Expedition.

That night we had our annual potluck and raffle. Everyone in the group made a dish to share, and we all gathered around the bonfire pits to chat. Every year, the amazing sponsors of the expedition donate prizes for the raffles, and everyone has a chance to win. The prizes range from GUNK swag packs and Nisstec gift certificates to a Shiftpod. Attendees rarely leave empty handed. This year they also gave away three custom Rogue Overland fire pits, made by P&P Engineering.

Testing Rigs On the Trail

We hit the dirt roads hard on Day 3, driving through the Kofa Wildlife Refuge to our final destination, Robson’s Mining World. Throughout the trail, we encountered washes, whoops, some non-technical rock scrambles—and a lot of dust. Every vehicle in our group was able to complete each obstacle without any difficulties. We had an AWD Subaru Outback and a few fullsize pickups—two Chevy Duramax trucks, a Ford F250, and a Toyota Tundra—in the group. The fullsize pickups may have gotten some pinstripes, but those are just badges of honor in the off-road world. 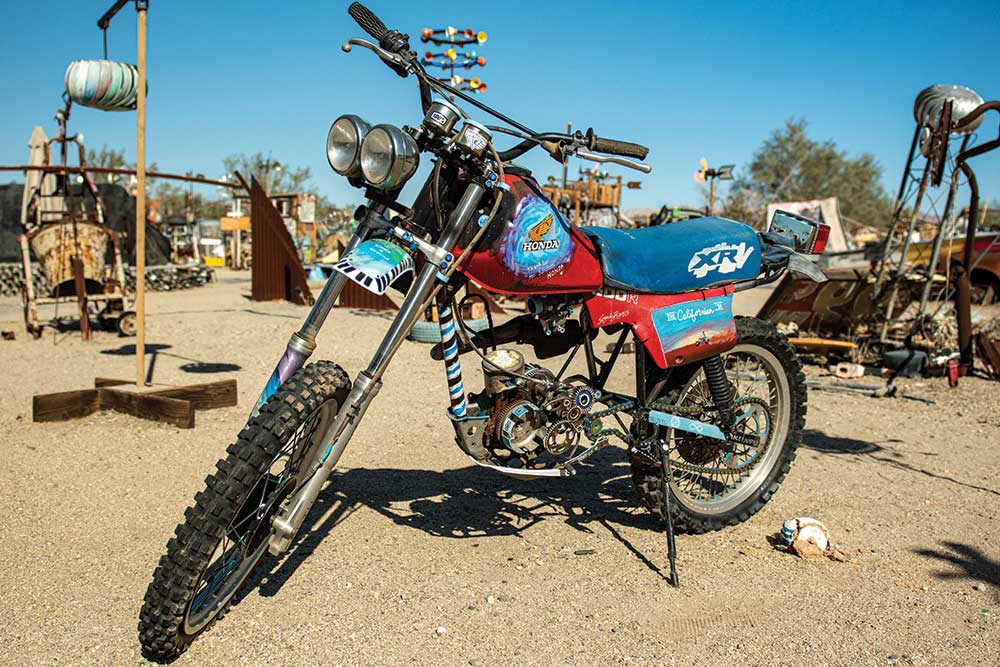 An old motorcycle turned into a beautiful work of art.

Halfway through the day, we took a break to stretch our legs at the Hoodoo Cabin. The Hoodoo Cabin, built in 1940, was a host for cattle employees to stay in overnight while checking the miles of fences on the trail. It was restored in 2007 so that current overnight visitors can experience the same desolation of the area.

The fullsize pickups may have gotten some pinstripes, but those are just badges of honor in the off-road world. 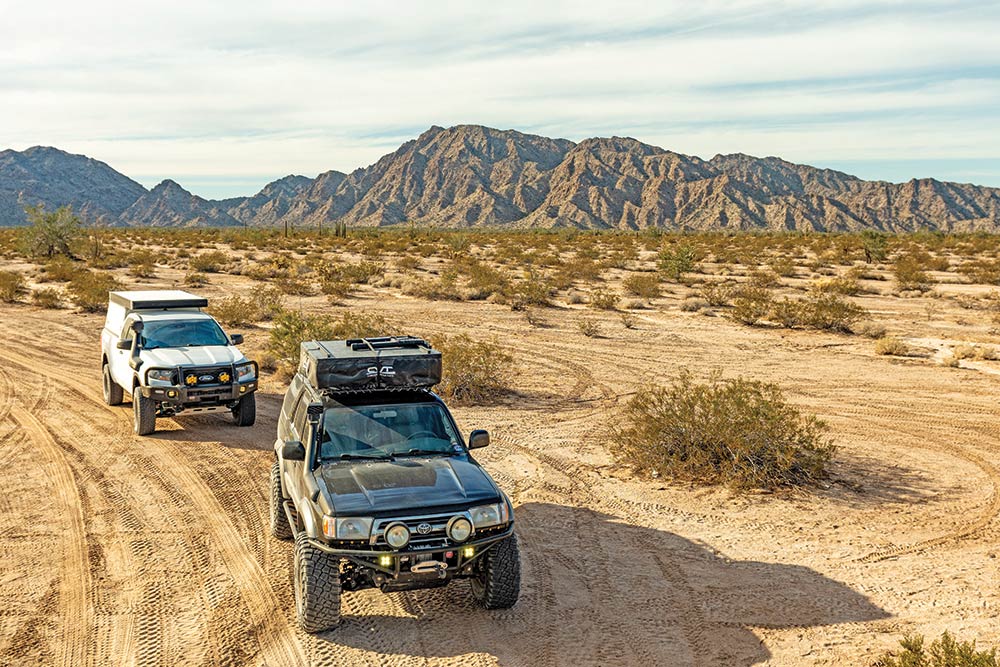 The wide open spaces of the desert offers majestic vistas and endless horizons.

On the last morning we woke up inside Robson’s Mining World. It was a free day without any set plans, so everyone was able to wake up at their leisure and move about however they wanted. We got a private tour of the grounds from the property caretaker. The mine was first established in 1917. The property has changed hands four times before Western Destinations took over in 2009. We were able to walk into the original buildings used by the old miners, and here were a lot of original pieces still intact, some brought in by the new owners to go with the overall aesthetic of the environment.

The goal of the expedition is to see as much as possible in the limited time given. 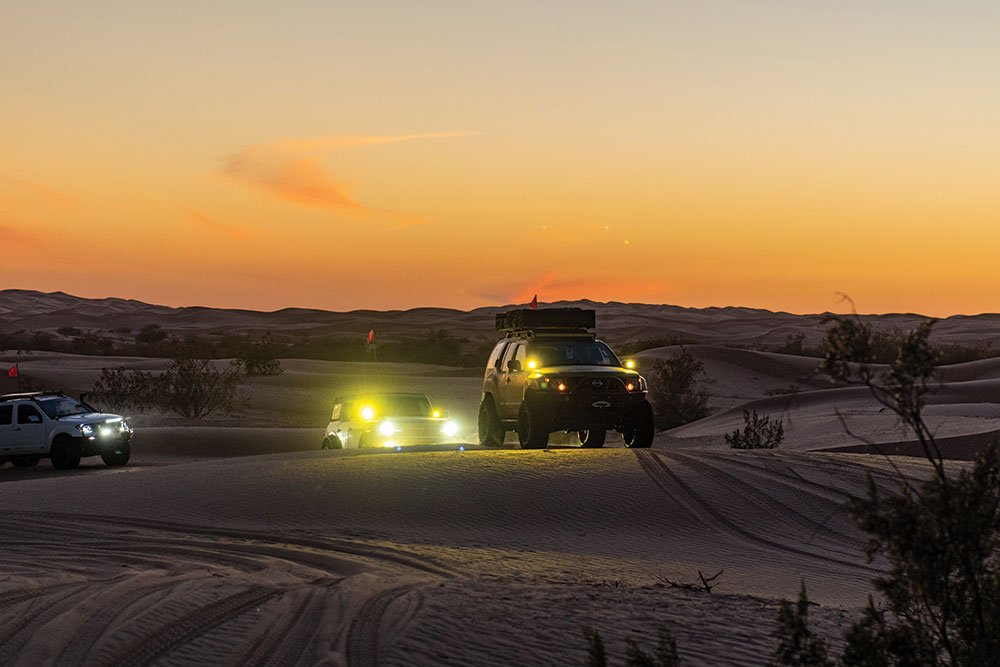 The famous sand dunes of Glamis did not disappoint, but many rigs succumed to the drifting sands.

If you’re looking to get off the pavement and hit the dirt road in February, we highly suggest checking out the Rogue Overland Expedition. You’ll make new friends, learn more about yourself and your vehicle, and see a part of the United States that you’ve probably never thought to explore. Bring yourself, your significant other, your family, and your pets to this annual expedition; you won’t regret it. If you’re not satisfied, you’ll have to take it up with Rogue One.

To learn more about Rogue Overland and their expeditions, check them out on social media @rogueoverland, or visit them online at rogueoverland.com.

Editor’s note: A version of this story previously appeared in the TREAD July/ August 2022 issue.

Members of the Rogue Overland group helping a fellow partipant fix a trailer that broke down on the trail.