→ Submit your rig and win a Tread magazine feature of your truck! ←
Get the Magazine
Camping, Features, Outdoor Adventures, Overlanding, Trails & Tales
Story by Ashley Giordano
Photos by Richard Giordano 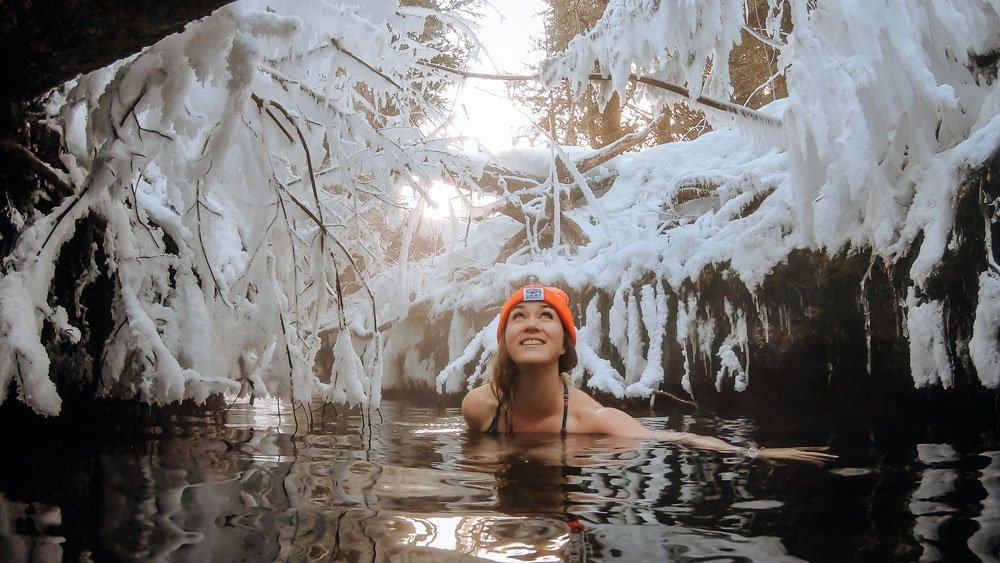 A Journey to the Frozen Tundra: Arctic Canada

As we investigated Arctic Canada, I danced around icy sections of the Arctic wooden boardwalk path. I saw a cloud of steam rising in the distance. We were almost there. The snowy trail led to a forest of aspen, birch, and white spruce, in the midst of which lay a pool of natural hot springs. These thermal springs marked the last unfrozen body of water my husband, Richard, and I would encounter for the next four weeks, as our travels took us north past the Arctic Circle to the hamlet of Tuktoyaktuk, Northwest Territories. Moreover, we looked forward to enjoying the mineral-rich heat and mystical Narnia-esque surroundings of Liard River Hot Springs in the wintertime.

Heading to the sheltered outdoor change rooms, we started the de-layering process. Thick jackets, ski pants, winter boots, and mitts were the first to go, followed by soft fleeces, wool long johns, and socks left in a heap on a frosty bench. Wrapped in a thin towel, I walked briskly toward the sulfurous haze, eager to warm my skin as it rapidly cooled in the chilly air. The pools were relatively shallow, however, forcing me into a grasshopper-like crouch, but the water was pleasantly warm. In addition, both hot and cold currents took me by surprise as we swam toward a canopy of branches dripping with a thick white frosting of hardened snow. In the warmer months, this area of the boreal forest is green and lush with ostrich ferns, cow parsnip, nettle, and 14 species of orchids. 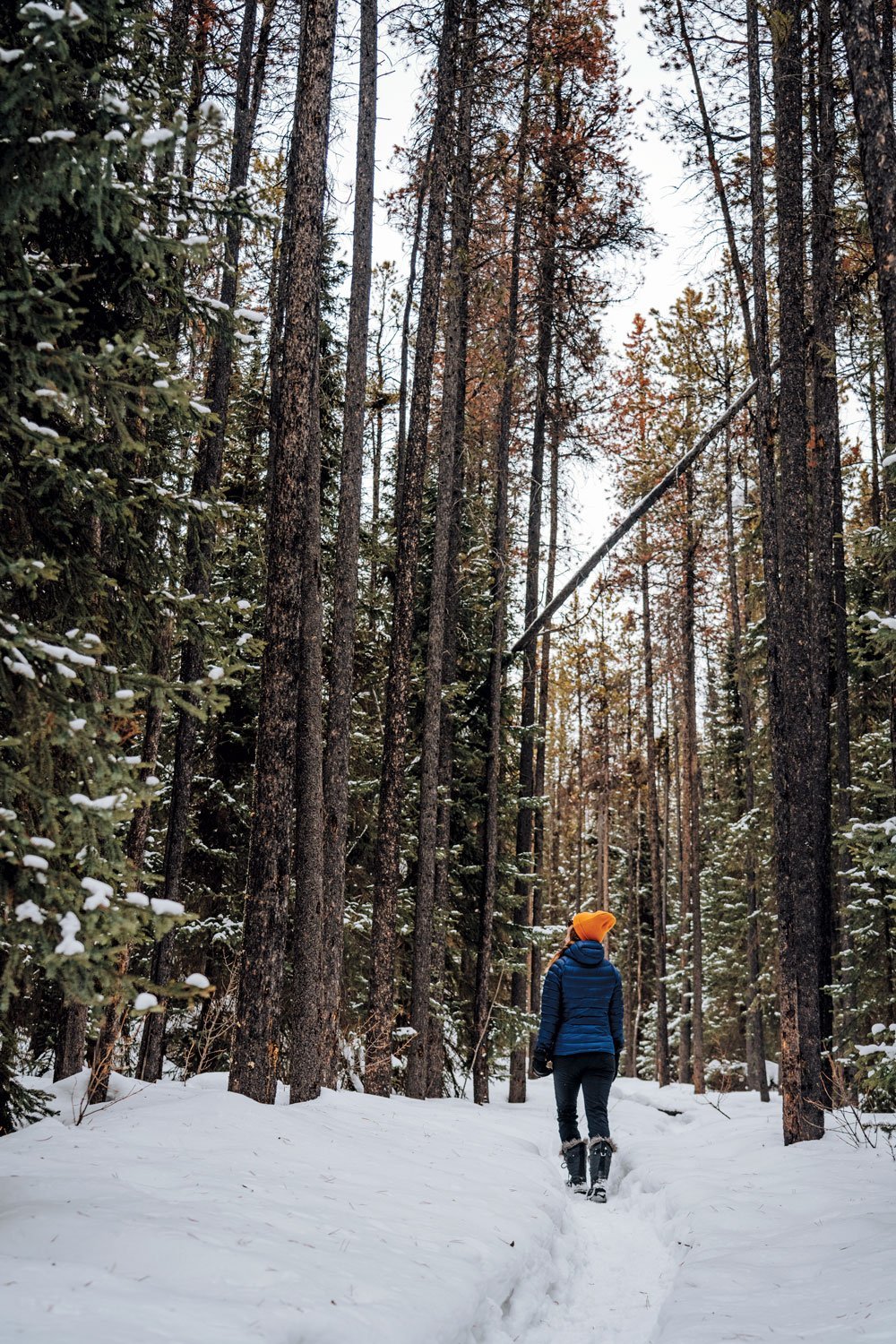 The boreal forest, which spans through most of Canada, Russia, and Scandinavia, is the world’s largest land biome. Twenty-nine percent of the forest is located in Arctic Canada, running south of the Arctic Circle but north of the temperate zone in the southern part of the country. It is within these 270 million hectares of wetlands, woodlands, and lakes that 325 North American bird species, caribou, moose, elk, wolves, cougars, lynx, and bears call home. Fortunately, around 80 percent of Canada’s boreal forest remains relatively intact and free of industrial disturbance.

Eager to continue north into the wilds of the boreal forest, we reluctantly took a deep breath, slipped our toes into frozen sandals, and braced for the biting cold as we stepped out of the comfort of the warm water, running toward our pile of dry clothes.

Stepping into the lobby of the downtown hotel, I made an inquiry at the front desk, “Where is the bar located?” The hostess, like every local we’d met in Dawson City, Yukon, was very friendly and directed us to the Sourdough Saloon several meters to our right. Continuing to the barroom, we passed a run-down piano in the corner, several sets of moose antlers mounted to the wall, and a pair of old west swinging saloon doors marked as an exit. The saloon was cozy, in a Victorian-era-décor-meets-trapper-cabin kind of way.

“Toe Time” wasn’t until 9:00 p.m. but, given it was the slow season, our amiable bartender agreed to serve us several hours early. Being a tourist in the wintertime does have its benefits. To our surprise, we would be served by The Captain—a young man sitting at the end of the bar who also happened to be a bartender at the Sourdough Saloon. A nearly empty bottle of Dom Pérignon rested beside his elbow on the bar top. The Captain enthusiastically donned his sailor’s cap, grabbed the bottle of Dom, and a wooden box containing a mummified human toe wrapped in white cotton.

We were off to shoot back the legendary Dawson City right-of-passage: the Sourtoe Cocktail. 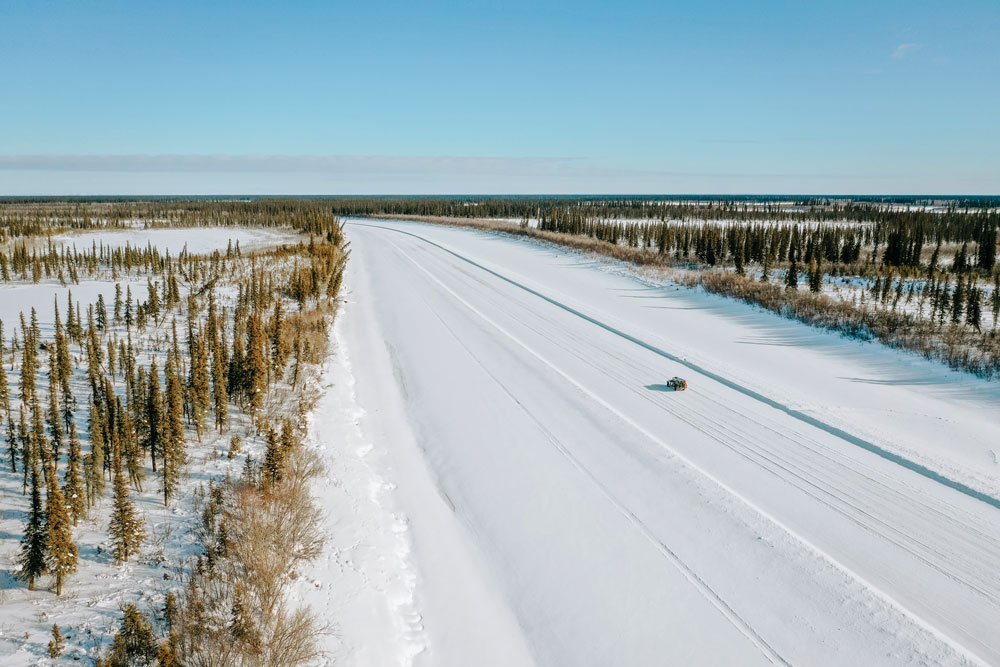 The Inuvik to Aklavic ice road. 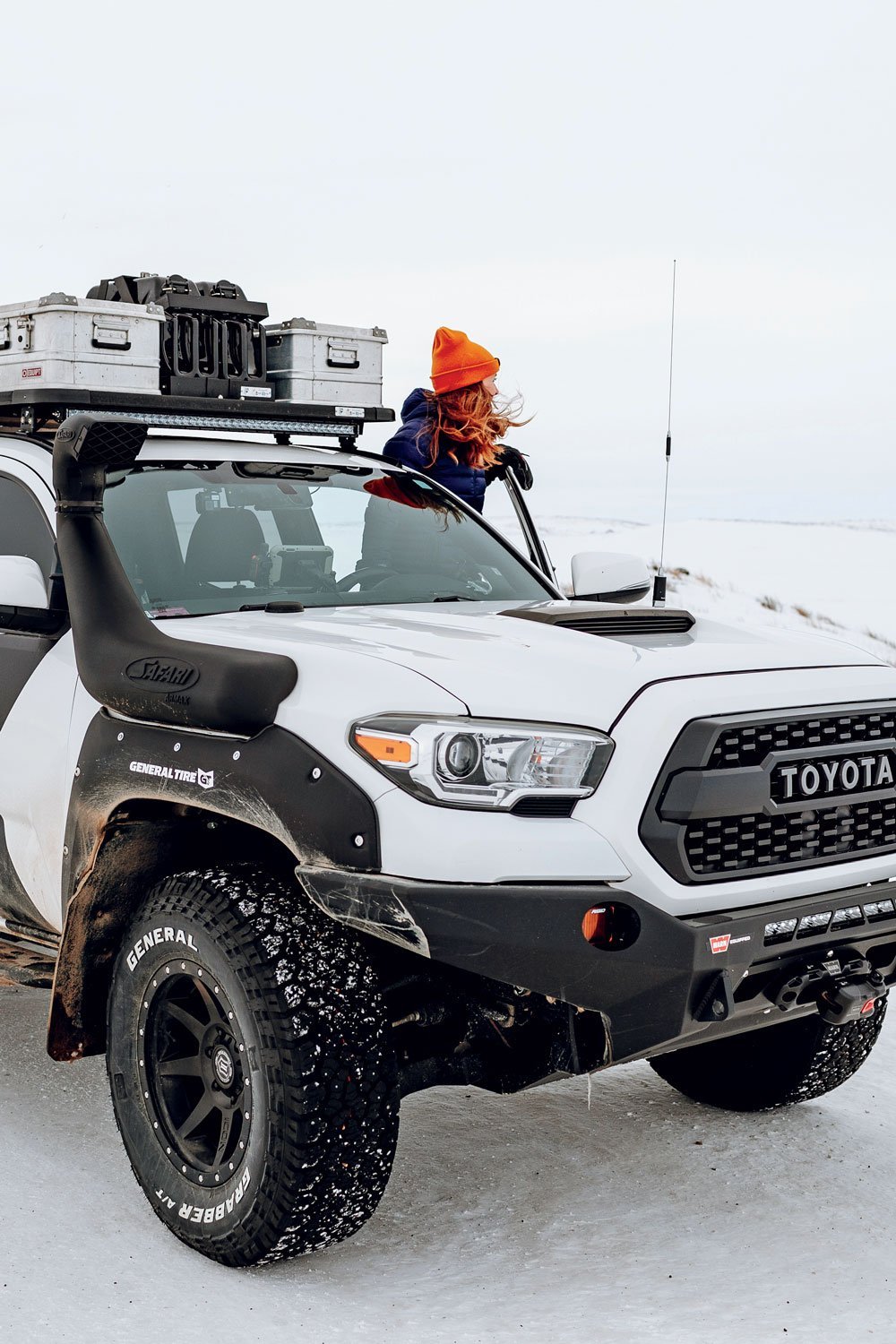 Finally above the treeline, we make our way to the hamlet of Tuktoyaktuk and the frozen Arctic Ocean.

The Sourtoe Cocktail origin story begins with two brothers named Louie and Otto Liken. In addition to their day jobs as miners, they passed their time smuggling liquor into Alaska during the Prohibition Era.

During one of their rum runs Louie’s right big toe succumbed to frostbite. It was amputated and subsequently preserved in a jar. Legend has it that nearly 50 years later, Yukon local and river barge pilot Captain Dick Stevenson bought the cabin. (This was complete with a pickle jar containing Louie’s toe, preserved in salt.) He bought it from an old fur trapper and rum runner named … Otto Likens. Captain Dick brought the toe to town and invented the beginnings of the Sourtoe Cocktail. It contained champagne, a beer glass, and a mummified toe. 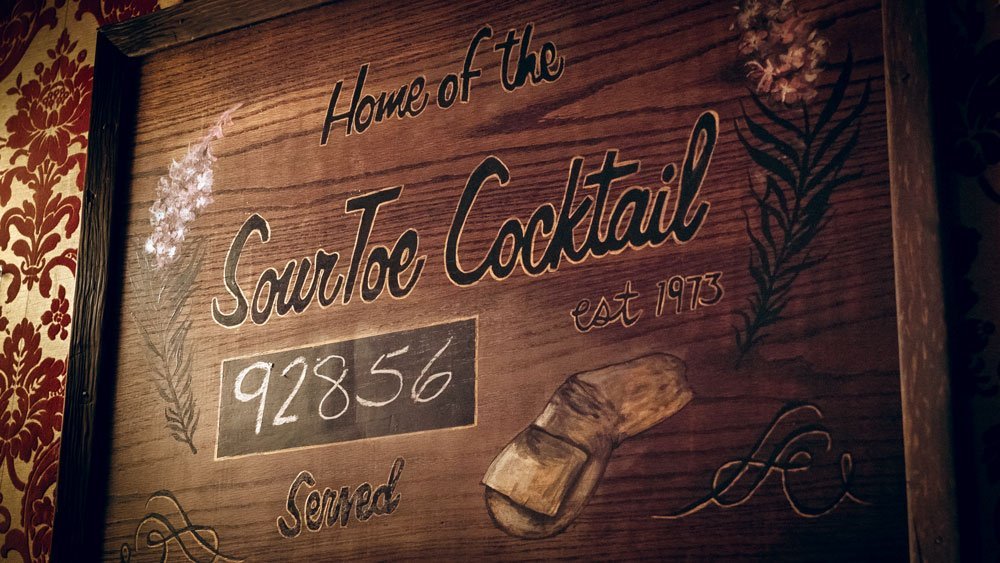 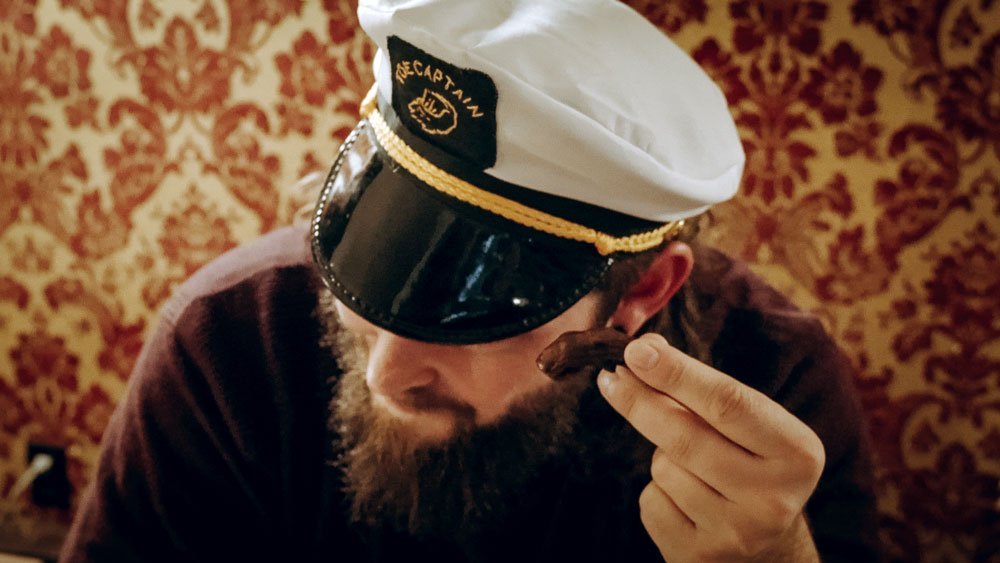 The Captain prepares us for the Sourtoe Cocktail in Dawson City, Yukon. 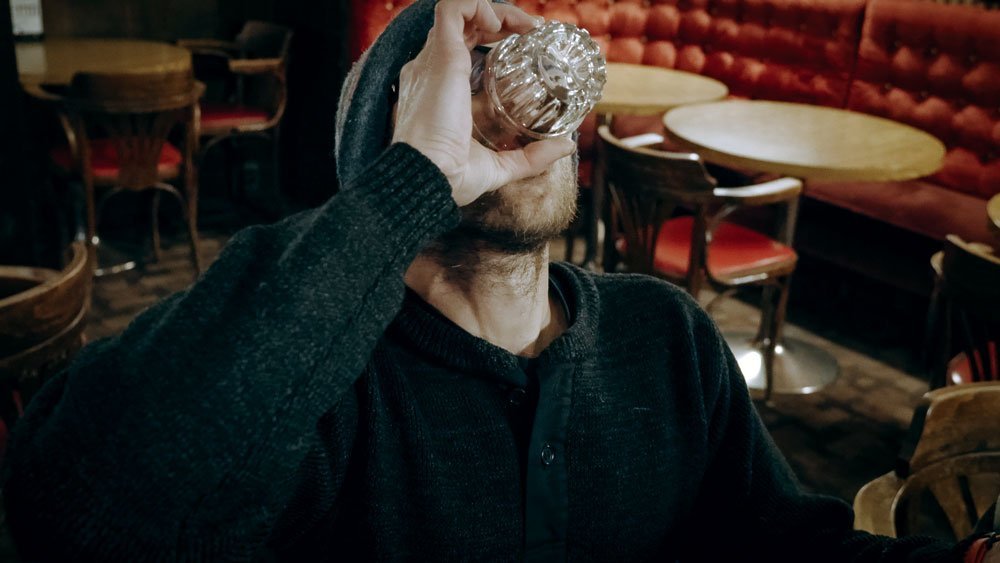 Today, Yukon Jack whiskey is the traditional alcohol of choice. The induction into the Sourtoe Cocktail Club (complete with certificate) is contingent on the following phrase. “You can drink it fast, you can drink it slow. But, your lips must touch the gnarly toe.”

“Eager to continue north into the wilds of the boreal forest, we reluctantly took a deep breath. We slipped our toes into frozen sandals, and braced for the biting cold as we stepped out of the comfort of the warm water, running toward our pile of dry clothes.” 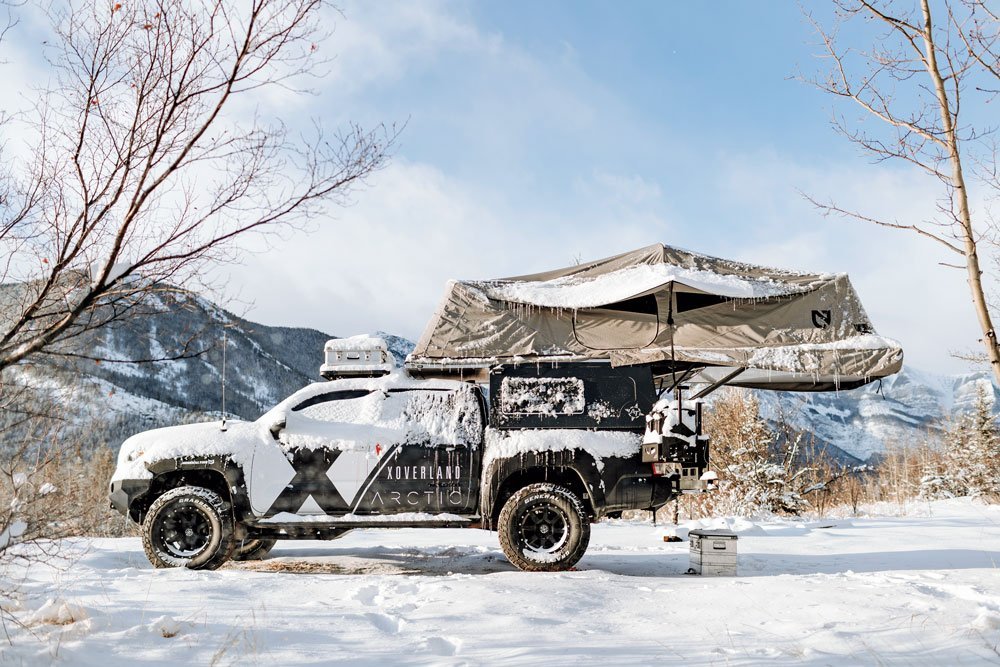 A throwback to the original recipe, our present-day Captain emptied champagne from his Dom Pérignon bottle into my shot glass. He slid the toe (complete with toenail) to rim the glass. With a flourish, he finally dropped the toe straight into my drink. Consequently. I picked up the shot and threw it back, all while bubbly champagne hit my throat. And, the wrinkly old Arctic Canada toe hitting my lips. 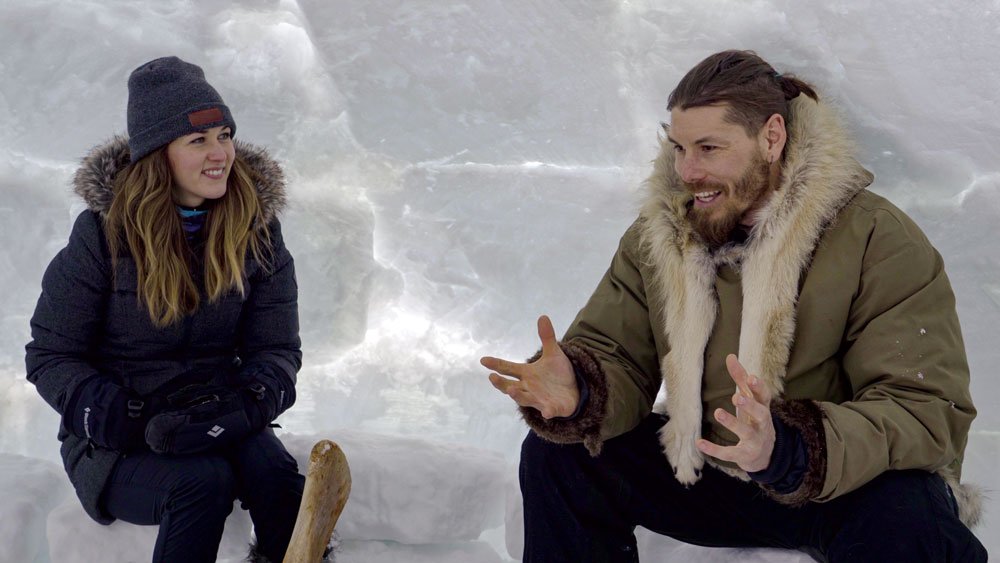 Local guide Kylik Kisoun talks about embracing winter and all it has to offer.

This wasn’t my first time in an igloo, however, but it certainly was the most interesting. Sitting on a hard-packed bench, I observed the large blocks of snow arranged in a dome shape around me. Cracks between the blocks had been filled by the builder. For instance, they have strengthened the structure while providing insulation from the cold, Arctic air. The indigenous people of the western Canadian Arctic, collectively referred to as the Inuvialuit, have rich nomadic roots. They widely traveled according to the seasons by foot, boat, and sled. They made the Arctic Canada snow igloo a great temporary shelter during hunting trips.

Our own nomadic tendencies led us to the frozen Mackenzie River Delta and onto the Inuvik to Aklavik winter road. Made completely of ice, this road is only accessible to vehicles in the winter. 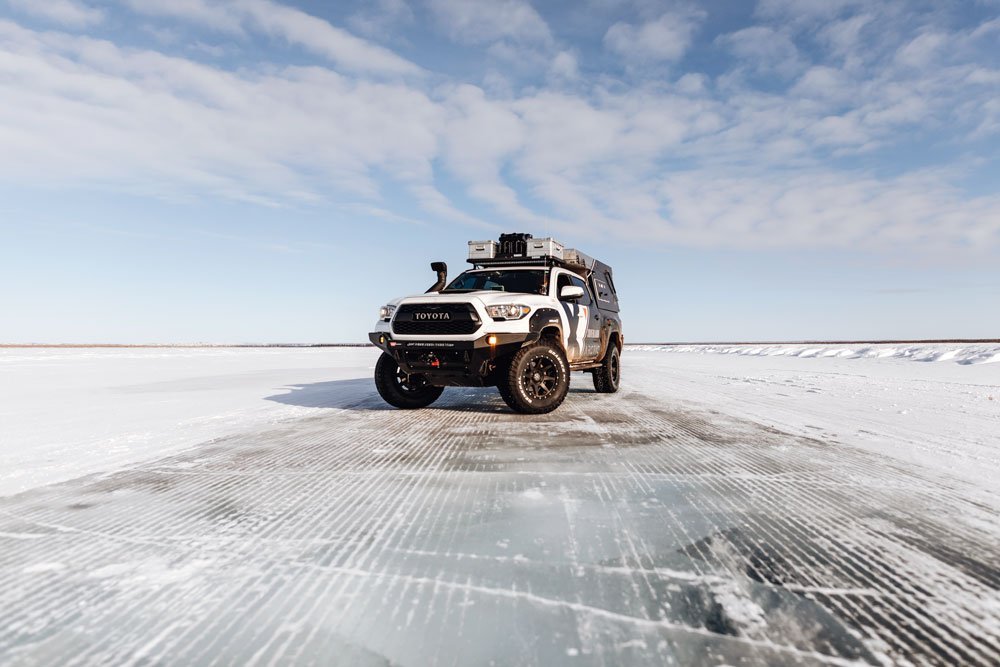 The Mackenzie River Delta freezes in the winter, creating the 117km Inuvik to Aklavik ice road.

Although neither by foot, nor boat, nor sled. Our nomadic tendencies led us to the frozen Arctic Mackenzie River Delta and the Inuvik to Aklavik winter road. Made completely of ice, this road is only accessible to vehicles in the winter. We arrived at our destination and hopped on the back of a snowmobile. After that, we arrived at an igloo village with local guide Kylik Kisoun Taylor of Tundra North Tours. We talked about the importance of preserving cultural practices. Additionally, the beauty of viewing the Arctic Canada winter as more than something to merely survive. “Most people walk away from these experiences and want to be in the environment, despite its harshness,” Kisoun explains. “It’s the most exciting time. When there’s a storm that’s the best time to go outside because … well, that’s when you feel the most alive.”

Check out Expedition Overland’s Solo Series on YouTube for more on Richard and Ashley’s journey to the Canadian Arctic.