→ Submit your rig and win a Tread magazine feature of your truck! ←
Get the Magazine
Camping, How-To's, Outdoor
Text and Photos by Chris Collard 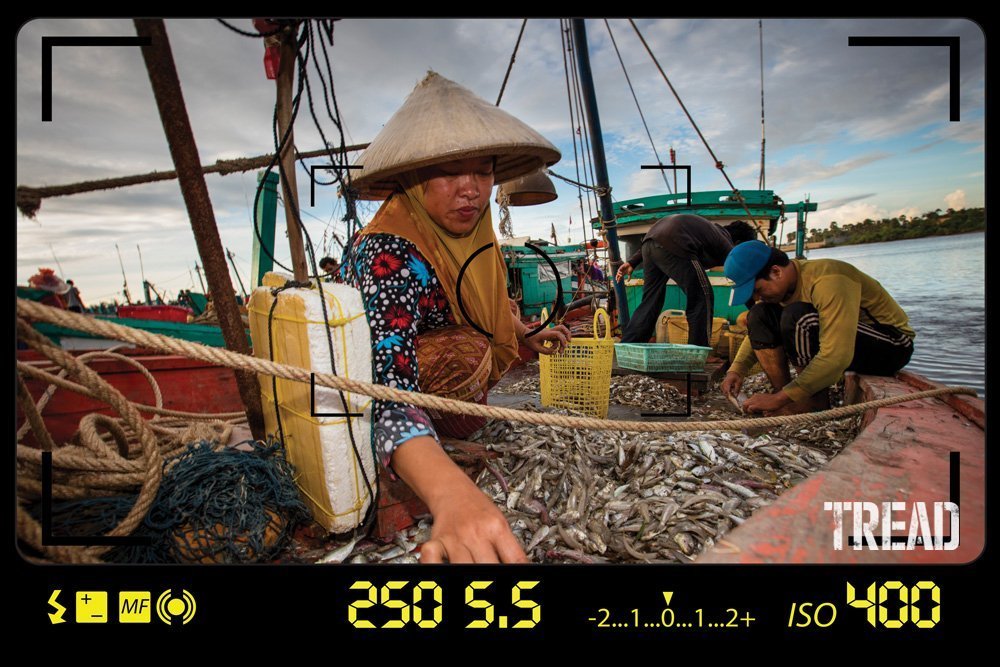 Penning the Chapters of a Journey With Your Camera

They say a picture is worth a thousand words, and as a visual storyteller the ability to capture a moment in time is crucial, especially in documentary photography. It requires the combination of technical aptitude, conceptual forethought, and what some regard as dumb luck. The former two can be taught, studied, and practiced, but the latter is usually more than luck. It is putting yourself in the right place, hopefully at the moment when something amazing transpires.

Atropical humidity weighed heavy in the air as I made my way down a damp street in the predawn hour. The previous evening I’d learned of a fish market on the river, which might offer a unique opportunity to capture frames of life in Southeast Asia. In locales such as Kampot, Cambodia, fishermen work through the night and head for the barn around 0300 to sell their catch to restaurant owners and fish mongers. Dawn was breaking as I stepped over a rusty steel cable and entered another world. I made my way through a labyrinth of wicker baskets with men, women, and children separating squid, crustaceans, and fish I could not identify. After buying a bag of fish and sharing many smiles, I requested permission to raise my camera and worked my way through the scene, firing off hundreds of frames. 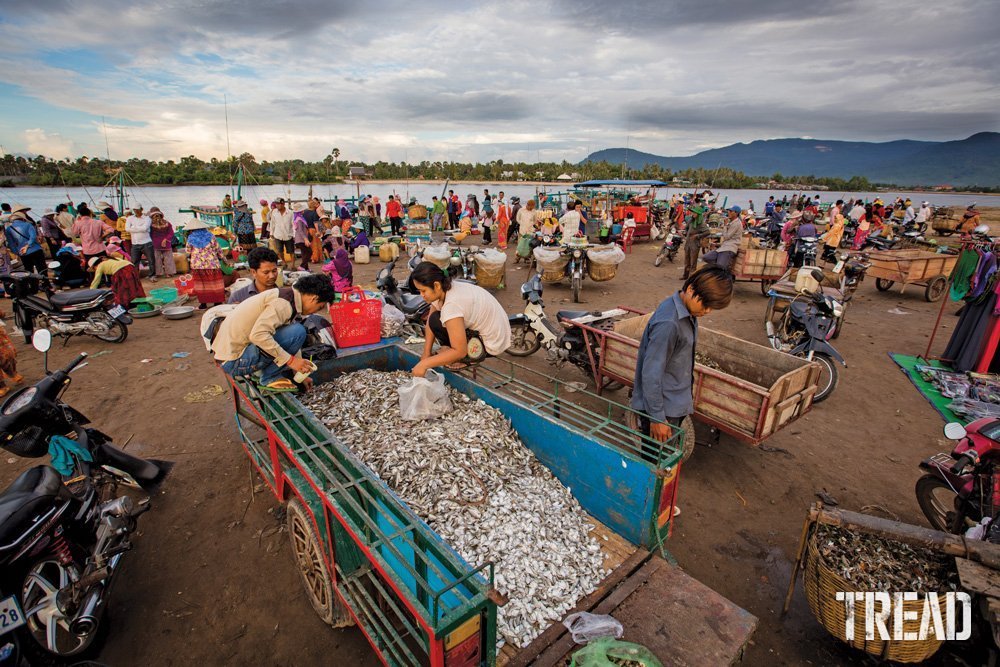 Camera in-hand, you have prepared and are ready. This foundational acumen separates the wheat from the chaff, and will make the difference between your friends saying, “Oh … that’s nice” or “Wow, this photo should be in National Geographic.” During my tenure as a magazine editor I received many story pitches that didn’t make the grade because they contained nothing but vehicle photos. We’ll have an in-depth discussion about shooting our beloved rigs in an upcoming Viewfinder, but documentary photography is about everything else. 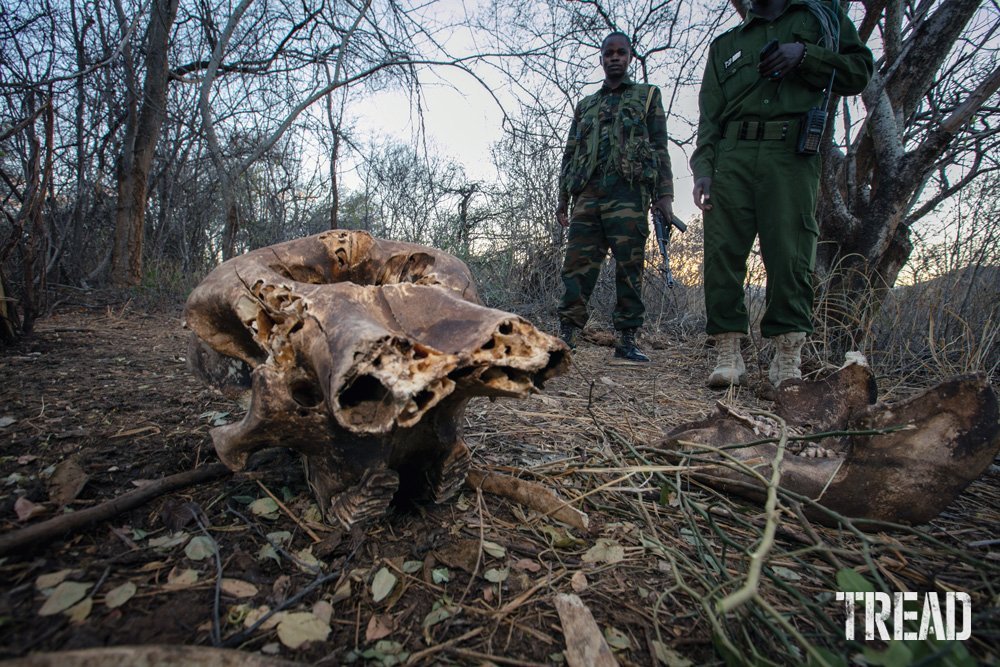 Working with Kenya Wildlife Service in their rhino reserve, my aim was to capture a day-in-the-life of rangers who protect one of our planet’s great endangered species.

TIP: Documentary photography is akin to penning chapters of a great novel.

There is a longstanding rule that the establishing, or master, shot should lead a story in documentary photography. It conveys an entire setting, puts a place, its character, or geographical region in context, and sets the tone for what follows. Like the opening paragraphs of a good book, it’s the hook that prompts our hand to turn the page. It is our job to determine the storyline, so think of every image as a chapter, and each must lead the eye to the next. If you are submitting a story for publication, you’ll probably be limited to 15 to 18 chapters, so make each one count.

I entered the Kampot fish market not knowing what I might find, but as I stepped over that cable I envisioned my establishing shot. I then needed to meander around, buy some fish, ask permission, and get back to the cable. But in the process I found a dozen more frames of equal impact. A core requisite of visual storytelling is to keep your mind open and eyes moving, letting your inner creative take control. While the establishing shot is essential, lest we forget its brethren the point shots. 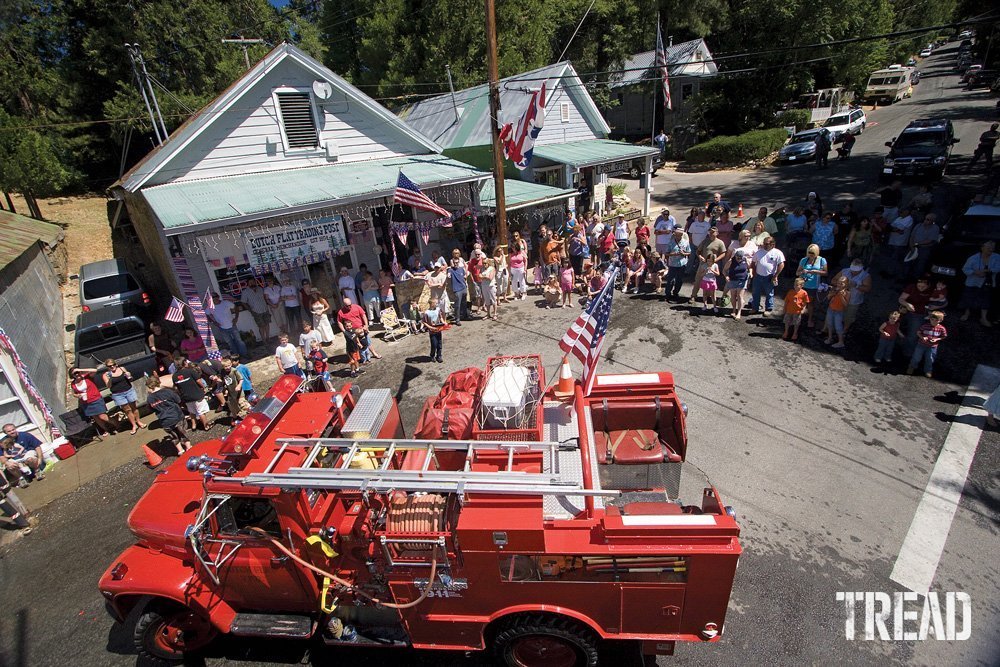 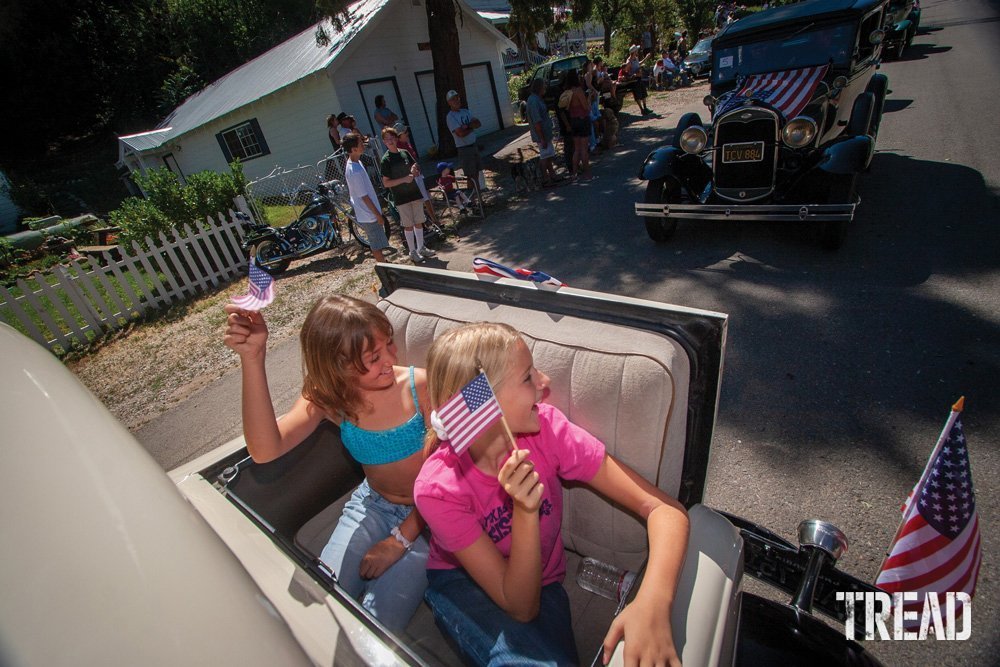 Fourth of July parade, Dutch Flat, California: Balconies and rooftops are perfect for capturing an establishing shot, but don’t be afraid to get in close and be part of the action.

The point shot dives into the finer details and brings the viewer with us on the journey. These elements are what you discover when you view the world through 360-degree goggles. Wander into a butcher shop in Ouarzazate, Morocco, or chill out with locals at a dog sled race in Dawson City, and let your goggles lead the way.

Sporting your new goggles, dissect the setting into modules, which may contain many sub elements. A good telephoto zoom is an asset in documentary photography, allowing you the flexibility to shoot wide or long without swapping lenses. Consider what composition will best convey what you are seeing, and more importantly, what you are feeling.

TIP: Break down each scene into establishing, medium, and close-up shots.

People have asked why I often travel alone, stating how boring it must be. Quite the contrary, my friends. Traveling solo does have shortfalls, but it is by far the best way to meet people and capture images of locals partaking in everyday life. I’ve traveled this way in Africa, Central and South America, and Australia. The times that I’ve been with others, I look for opportunities to break away to a street market, church, or other local flavor.

I rarely jump out flailing a camera like a cruise ship tourist to nab a shot (though I have been guilty of this). I prefer meandering through market stalls, chatting with vendors, asking about their wares, if their family works with them, all with a genuine interest in their lives. I call this the icebreaker technique. As was the case in Kampot, people become familiar with you and it sets the stage to request a photo. I then ask how they go about their normal routine, which allows me to photograph them in a more natural setting. 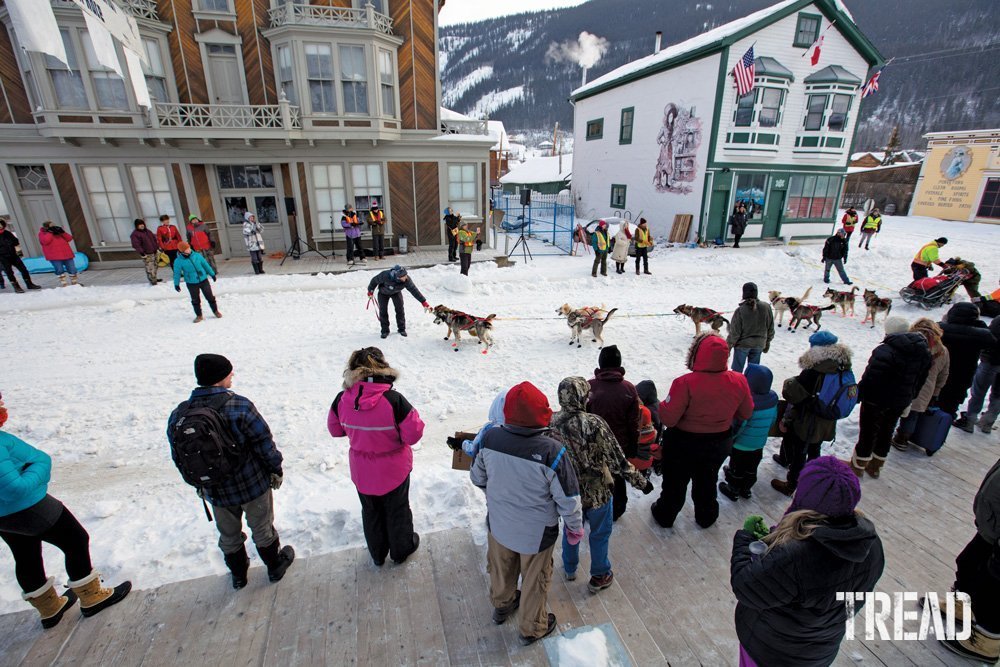 You need to like people and be willing to turn right when the tourist crowd follows their guide left. These conversations have led me to places I’d not imagined; locals-only attractions, invited for tea or dinner, or to stay the night with my new host. This takes time, but remember that time is the photographer’s friend.

TIP: Getting away from other travelers will expose you to the unexpected.

If there is one thing certain, it is that everyone loves to see their smiling mugs on an LCD screen. Instant sharing is a marvel of digital photography, and nowhere does it make a bigger impact than in the developing world. Once you’ve gained permission to take a photo, flip that camera around and let your subject view the results. This is the ultimate complement to the icebreaker, and more often than not, they will want to pose for more. 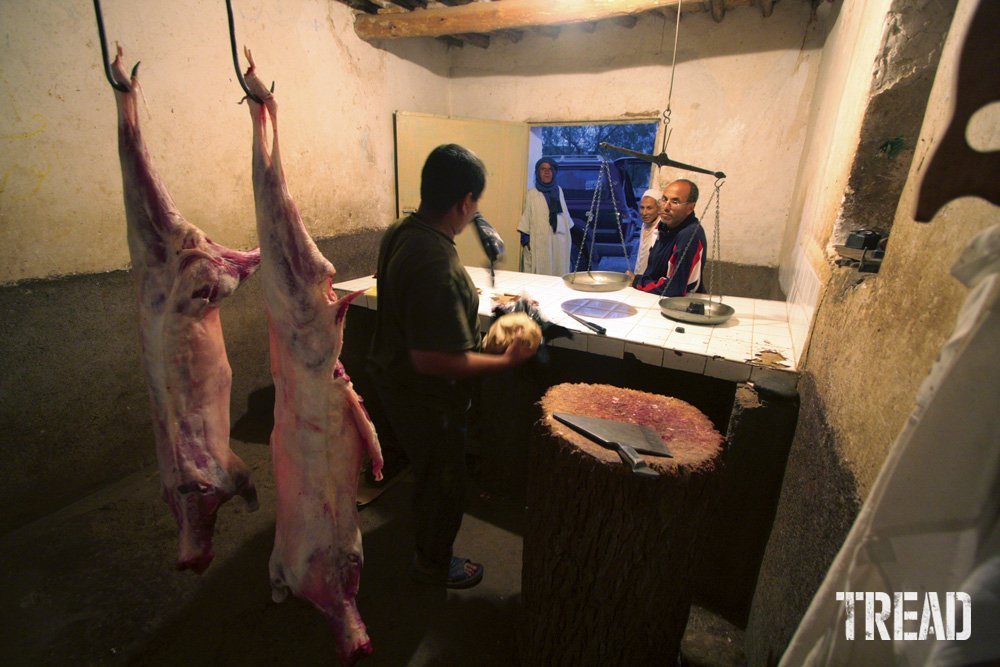 Ouarzazate, Morocco: It is the journey, rather than the destination, that makes travel interesting. While en route to M’hamid, the author stopped at a local butcher shop to buy goat meat. After asking permission, he retrieved his camera and captured a gallery of images depicting traditional life in central Morocco.

Cell phones are ubiquitous the world over, yet there are still regions where the indigenous people have rarely seen a picture of themselves. If they have a phone, take a second shot on yours and text it to them. Back in the ’80s and ’90s, global nomads Gary and Monika Wescott, of Turtle Expedition fame, pioneered the art of instant sharing. They utilized a Polaroid camera but now carry a portable printer.

TIP: Sharing photos with your subjects is the ultimate icebreaker.

A number of years ago I shared a gallery of images with my friend Dewitt Jones, a Nat Geo guy and motivational speaker. He said, “These are nice, but they all have one thing in common … you are in them.” I had to think about this, and after reviewing my photos I understood the lesson—nearly all of my subjects were acknowledging the photographer’s presence.

Several challenges arise when photographing people in third-world regions. The first might be that they don’t want to be photographed—some cultures believe a photograph steals their soul. The second is that you are a novelty, and they are so curious that they won’t leave you alone. Utilizing the icebreaker and sharing images will put subjects at ease, and make it easier to capture candid portraits for documentary photography. As for kids in remote regions of Africa? Forget it, they will be on you like white on rice until you move on. Heeding Jones’ words, I’ve spent many years trying to stay out of the shot. 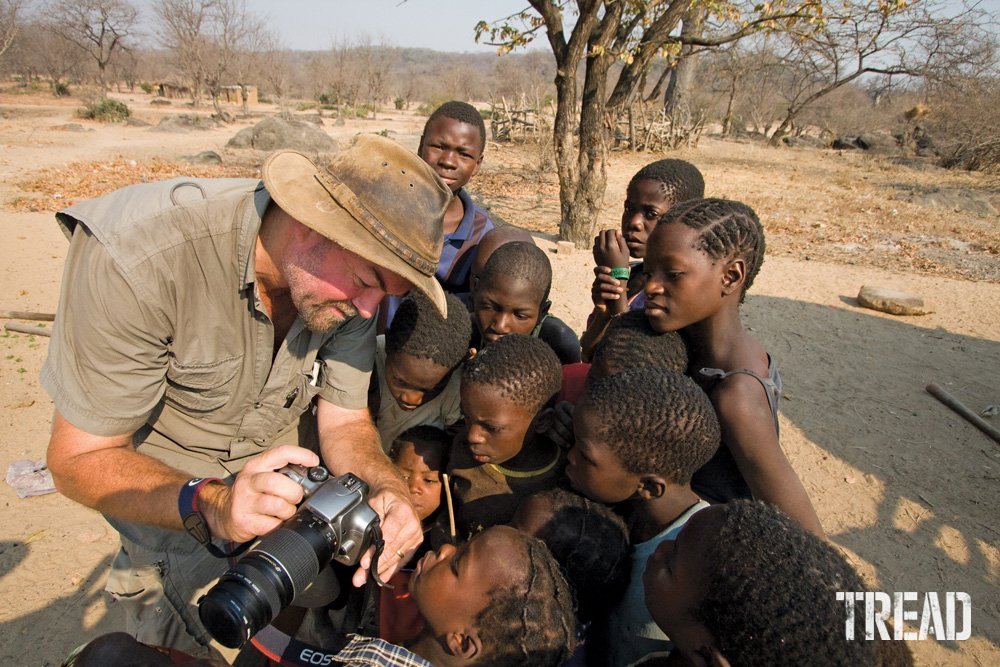 Tribal village, Lake Kariba, Zambia: In remote regions, the ability to instantly view a photograph on an LCD is still a novelty. Sharing images with locals is one of the best ways to make new friends, and they will most assuredly be happy to pose for more.

TIP: Avoid having the subject acknowledge your presence.

In the previous Viewfinder we examined framing subjects, the Rule of Thirds, and experimenting with various camera angles. Now let’s apply those skills to your next adventure. Whatever the scenario, avoid standing in the same place replicating the same composition. Put on those goggles and move around, look for interesting people or unique architecture, shoot long, short, wide, and low, get on a rooftop, launch a drone, or get in close to the action. At the end of the day, documentary photography is like penning a novel, but without the pen. As for dumb luck, I’ve had plenty of it. But as they say, better to be lucky than good sometimes.