After spending years building one of the most refined and capable fifth-gen Toyota 4Runners out there, Isaac Marchionna realized the limitations of the platform he was working with. Late last year he got an offer on his 4Runner that he couldn’t refuse. He already knew what was next. He went straight to the dealership and purchased one of the last Magnetic Gray 2018 Ford Raptor Supercrews available in the country.

Marchionna built his 2015 TRD Pro 4Runner in an overland style, but with an emphasis on high-speed desert travel. It was a jack-of-all-trades-and-master-of-none–type build. Over time it got too heavy and complex, which led to significant wear and tear on big adventures, especially faster off-road excursions in Baja. 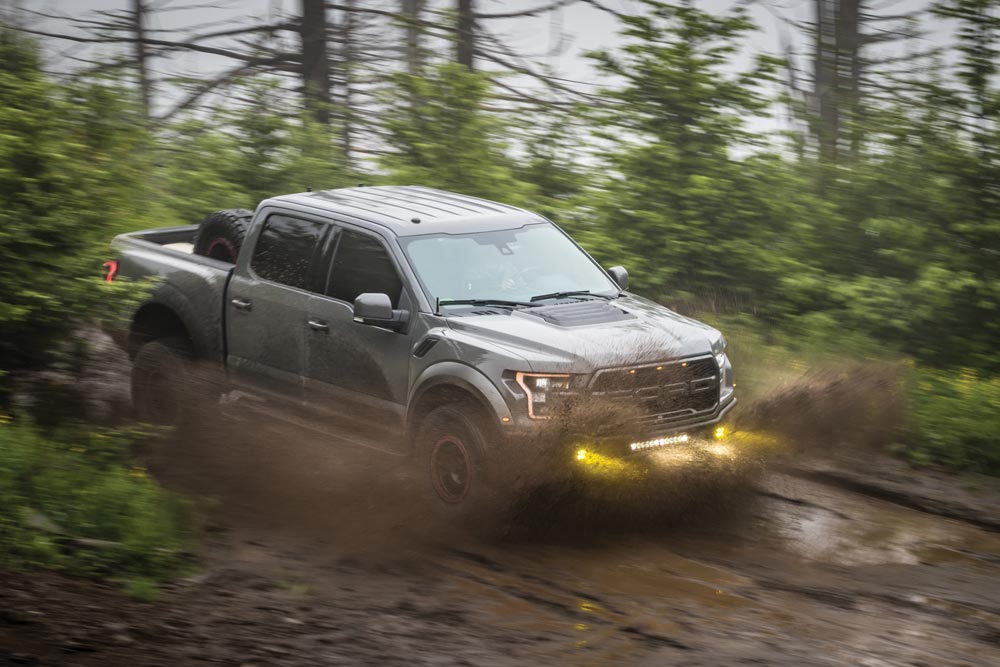 In the end, Marchionna wanted a vehicle that was ready to party with the best of them in Baja, but would still work as his daily driver and wouldn’t require big changes to go camping anywhere. The Ford Raptor was an obvious choice, as it is extremely capable at high-speed off-road endeavors, while being comfortable and refined for daily driving. You get all that in a vehicle straight from the factory, needing only relatively minor upgrades. 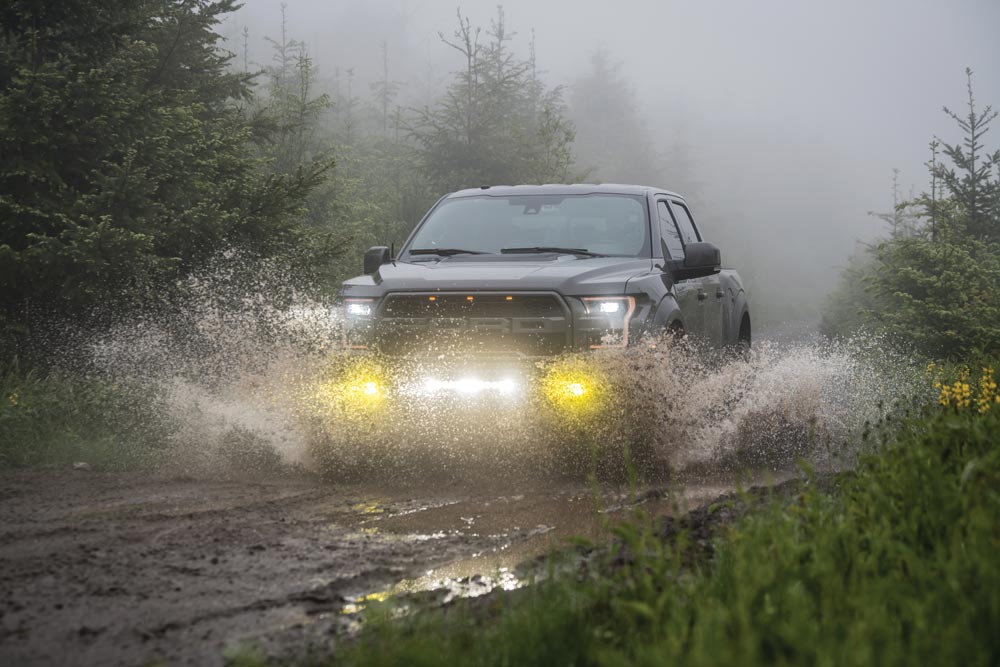 High-speed, off-road action is what the Raptor was built for.

The Raptor is lighter, more powerful, more comfortable, and gets better fuel economy than his modified 4Runner. The Raptor is a lot wider and longer, however. Marchionna mainly uses his off-road vehicles for high desert camping in eastern Oregon and big adventures down in Baja, places where the size of the truck isn’t much of an issue.

“2019 was Marchionna’s third Trail of Missions trip. It was extra special as he drove his newly completed Raptor build and had his dad along as his co-driver.”

The big off-road adventure that Marchionna is most excited about each year is the Trail of Missions trip. The trip is put on by Cameron Steele, of Desert Assassins fame, and entails about 20 or more vehicles, mostly Raptors, on a nine-day adventure across Baja visiting the historic Spanish missions along the El Camino Royale. The trip is featured each year in a one-hour made-for-TV documentary aired on the ABC network in the fall. 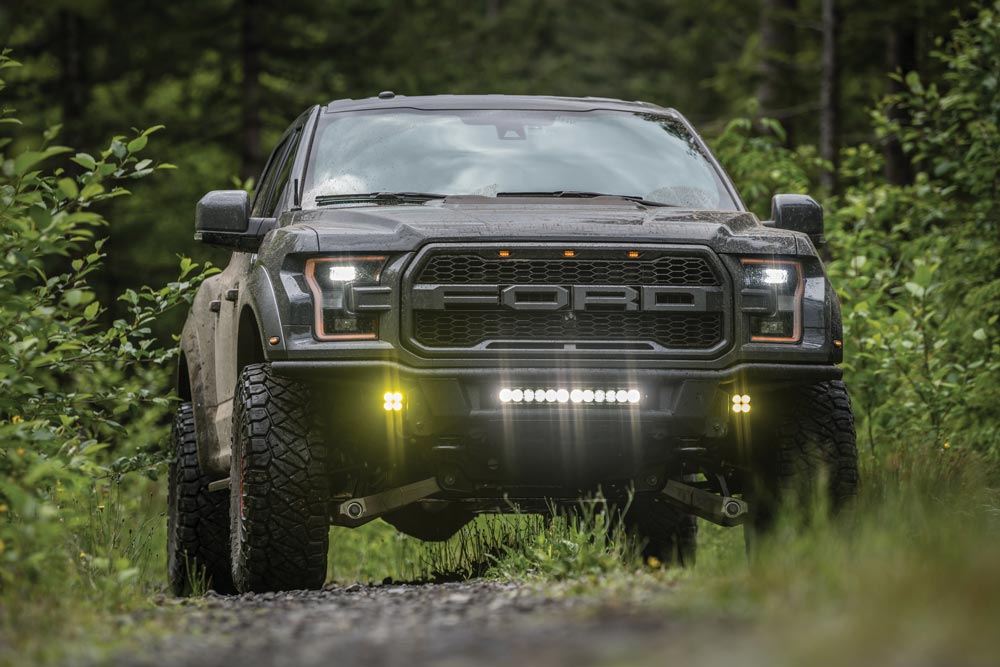 Understated but effective lighting from Baja Designs lights the way ahead. 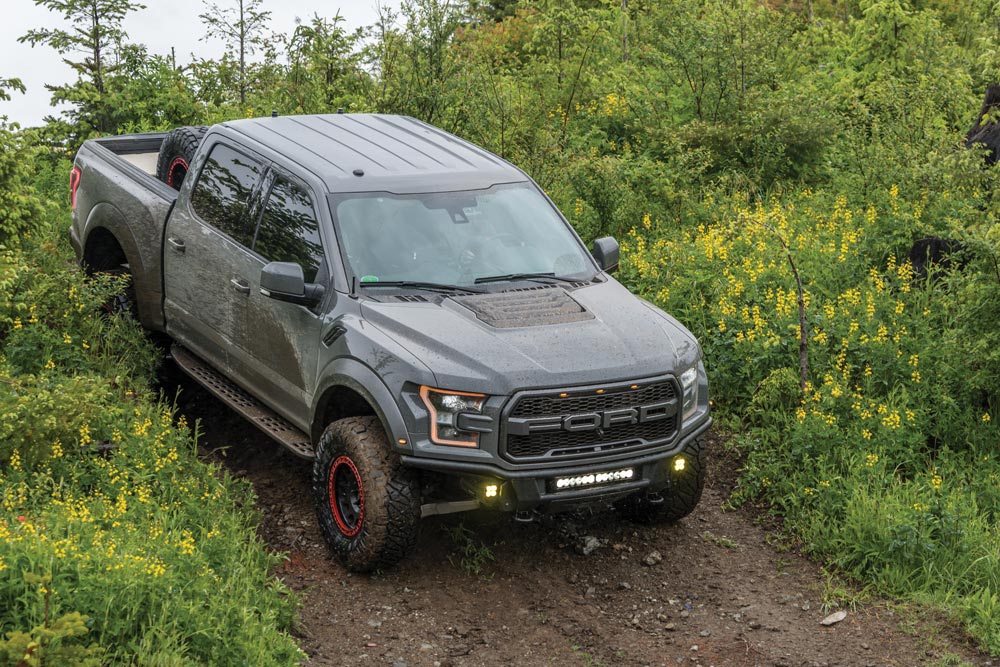 2019 was Marchionna’s third Trail of Missions trip. It was extra special as he drove his newly completed Raptor build and had his dad along as his co-driver. The trip was a gift to his dad for his 65th birthday.

Lots was learned while building and refining the 4Runner. Carrying those lessons over to the Raptor build was natural and challenging at the same time. Marchionna didn’t want to build a pre-runner or an overland vehicle this time, but instead wanted to build something that had the best of both worlds in a package that could be daily driven.

The first order of business for any vehicle build that will be used off road, especially at speed, is the right tire, wheel, and suspension setup. For this build the tire size was enlarged less than an inch, and only a 2-inch lift was fitted. Thirty-five-inch Nitto Ridge Grappler (35/12.50R17) tires are wrapped around Method 105 (17×9) beadlock wheels. The Method 106 beadlock rings are also custom powdercoated in Illusion Copper, a close resemblance to the Inferno Red on his previous 4Runner. The colored rings add a pop of color to this all-gray truck.

“The Raptor already comes with a slick specially tuned Fox 2.5 suspension setup, but there is always room for improvement. The shocks were upgraded to Fox 3.0 remote reservoir adjustable all around.” 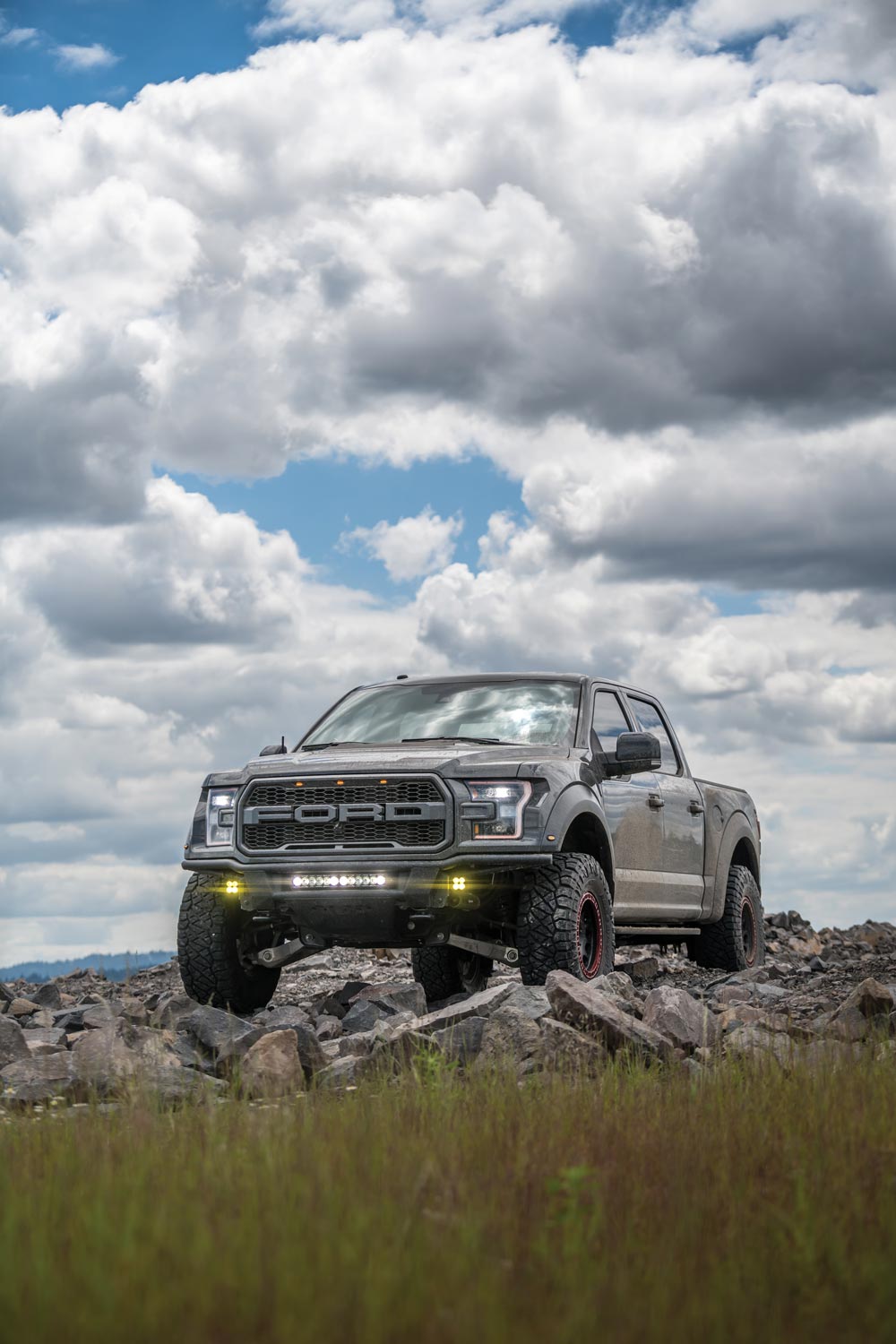 Not a rock crawler but quite capable in a wide range of off-road conditions. 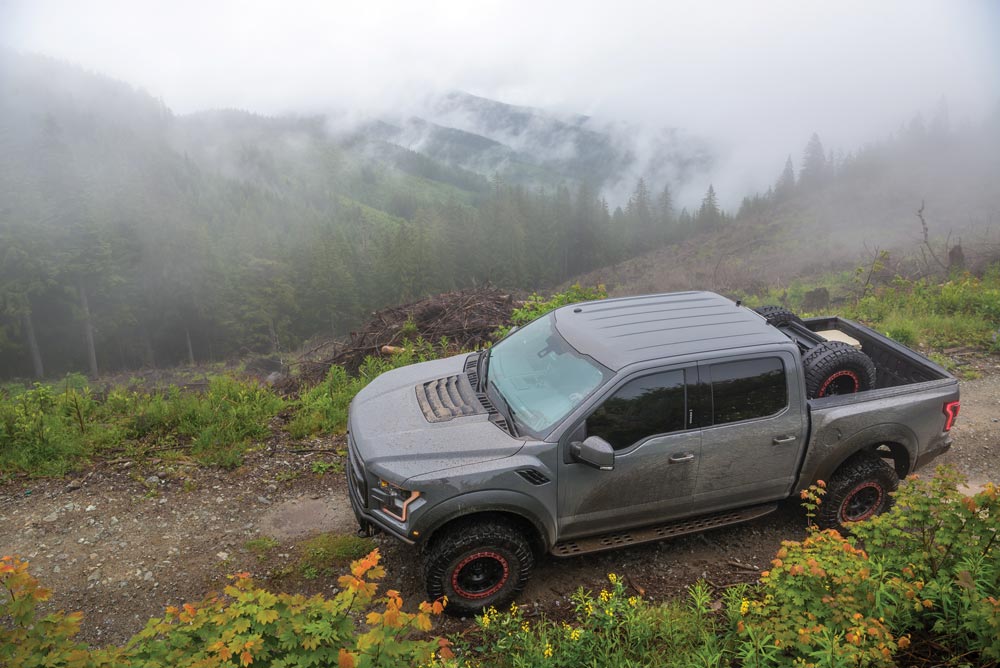 The Raptor already comes with a slick specially tuned Fox 2.5 suspension setup, but there is always room for improvement. The shocks were upgraded to Fox 3.0 remote reservoir adjustables all around. Up front, there are Camburg Kinetik upper control arms. In the back, you’ll find Icon Vehicle Dynamics multi-rate springs and a Camburg rear bumpstop kit.

Not much was needed underhood, as the twin-turbo 3.5L V-6 EcoBoost already puts out 450 hp. The Raptor also has some pretty impressive electronics and a smooth 10-speed gearbox with paddle shift manual select mode straight from the factory. 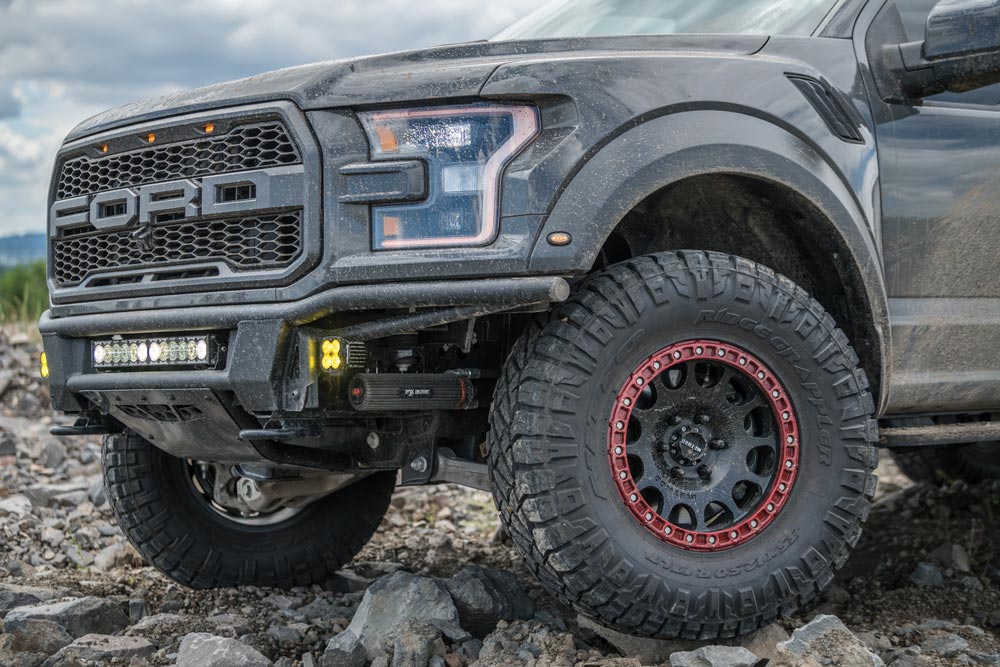 A Cobb Stage 2+ kit was added. It ensures clean air through a new higher flow intake. A front-mounted intercooler ensures the engine stays cool no matter how hard the truck is pushed, even in the desert heat. New downpipes make sure the engine breathes easy. Cobb’s Access Port tuner module lets Marchionna set the truck up for the specific tasks of the day, whether that is keeping up with racing legends across the desert in Baja or saving fuel on the local grocery run.

Business in the Front

Party in the Back

In the bed of the truck is where most of the modifications lie. The main feature is a SDHQ dual tire carrier. The tire carrier has been upgraded with a custom storage box and triple Scepter 5-gallon fuel can carrier. Also mounted on the tire carrier are a Pro Eagle Jack, CO2 Powertank, and a set of Maxtrax Extreme. A rail-mounted fire extinguisher and BuiltRight side-panel racks complete the bed build out. 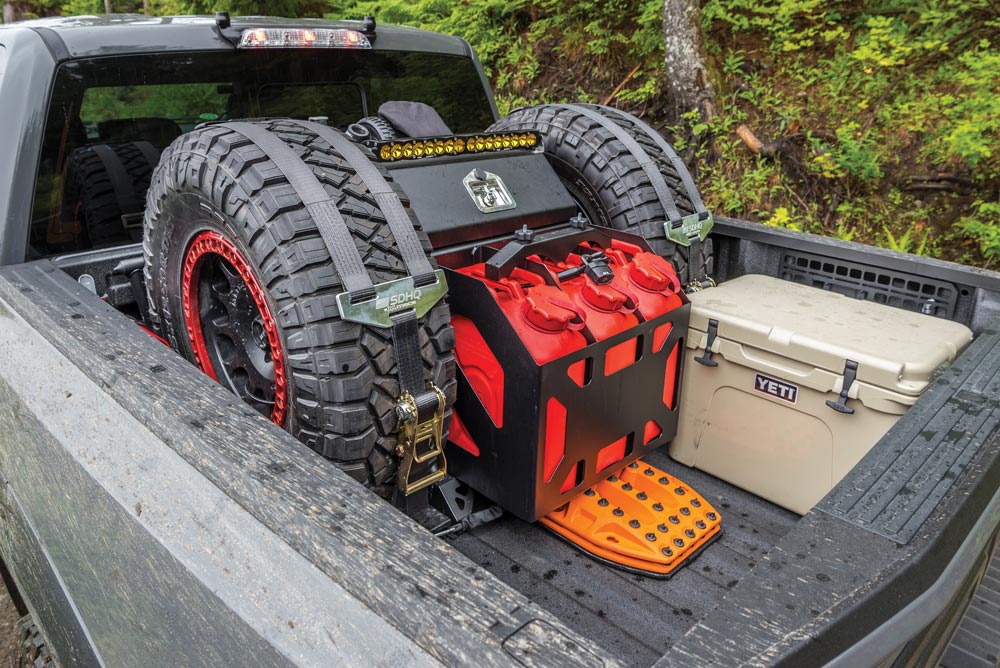 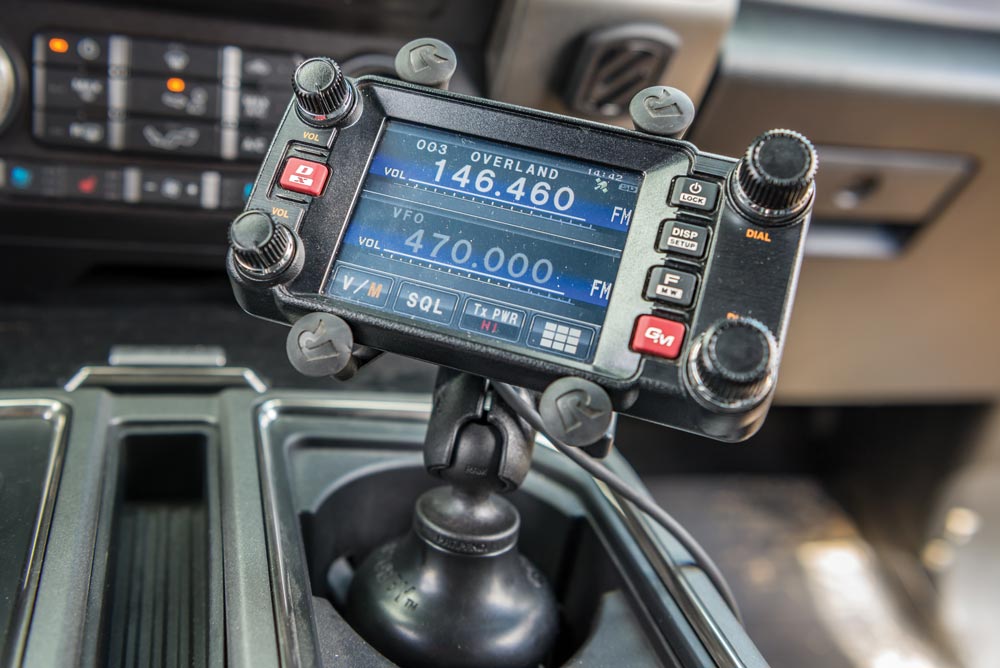 Need the Yaesu FTM-400XDR radio because coms are important.

Lighting on the back of the truck consists of two S2 Baja Designs Sport reverse lights mounted on the bumper. To ensure this Raptor is seen, even in the dustiest of conditions, a Baja Designs S8 20-inch strobing amber chase light is mounted atop the storage box on the tire carrier in the bed.

Life in a Raptor

The inside of a Raptor is super spacious, well put together, and well laid out. Even so, it got some tweaks to fit Marchionna’s lifestyle. The cavernous center console is organized with the custom TrekPak Organizer System, while loose gear is kept from flying around the cabin through pouches on the Blue Ridge Overland Gear Molle Seat Back Panels.

“After the trip, he hopes there won’t b much to do besides enjoy the vehicle, but Baja can be tough on vehicles, and this Raptor may surely need some attention.”

Communications and navigation are key in remote desert areas, so a full host of electronics are installed in the cab. For navigation, Marchionna uses LeadNav or Gaia GPS on a 10-inch iPad, mounted with a RAM Mount GDS-powered dock, mounted to the dash via a BuiltRight platform. Communications are handled through either a Yaesu FTM-400XDR Ham radio or Kenwood TK790H race radio, mounted with RAM Mounts. The vehicle also supports a WeBoost Drive Reach cell booster. 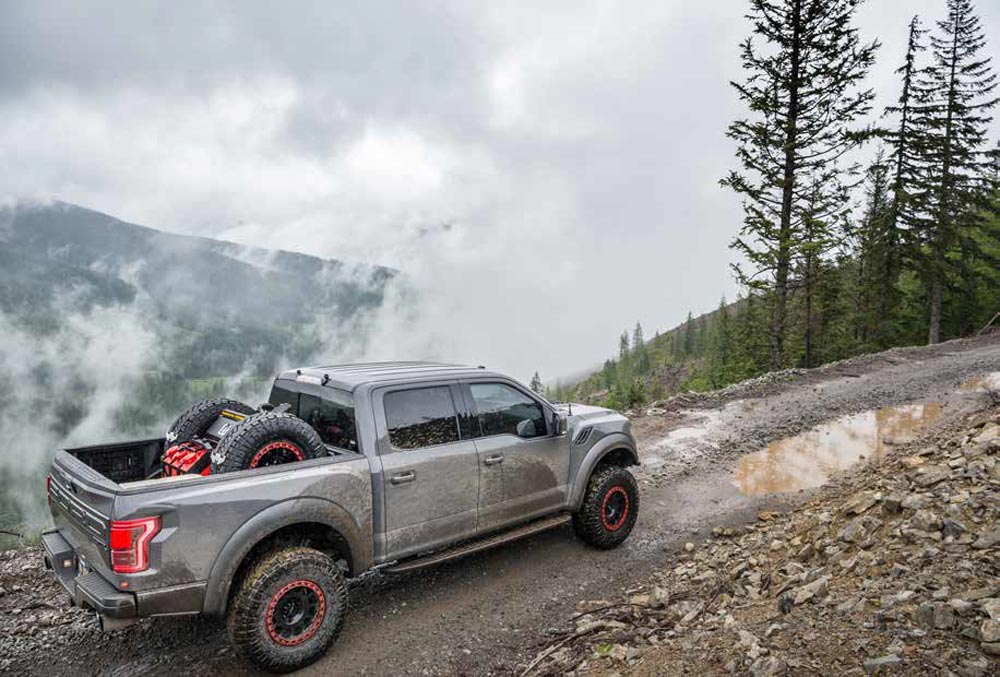 The Raptor is a sports car for the dirt. Just look at those dual exhausts.

Marchionna’s dog, Pozzi, a 3-year-old Aussie Doodle, is the true ruler of this Raptor, so she gets the whole back seat to herself. The back seat is protected from Pozzi’s excitement for adventure with a Solvit Premium Bench Seat Cover.

To wrap up all this awesomeness and protect it from the cactus pin-stripping and guaranteed rock chips from long miles in Baja, Marchionna had the Raptor covered in a 3M XPEL clear bra.

Before Marchionna hits the Trail of Missions, he’ll have Foutz Motorsports belly and diff skids installed. He’ll also have race radios installed and programed for the trip.

“In the end, Marchionna wanted a vehicle that was ready to party with the best of them in Baja, but would still work as his daily driver and wouldn’t require big changes to go camping anywhere.” 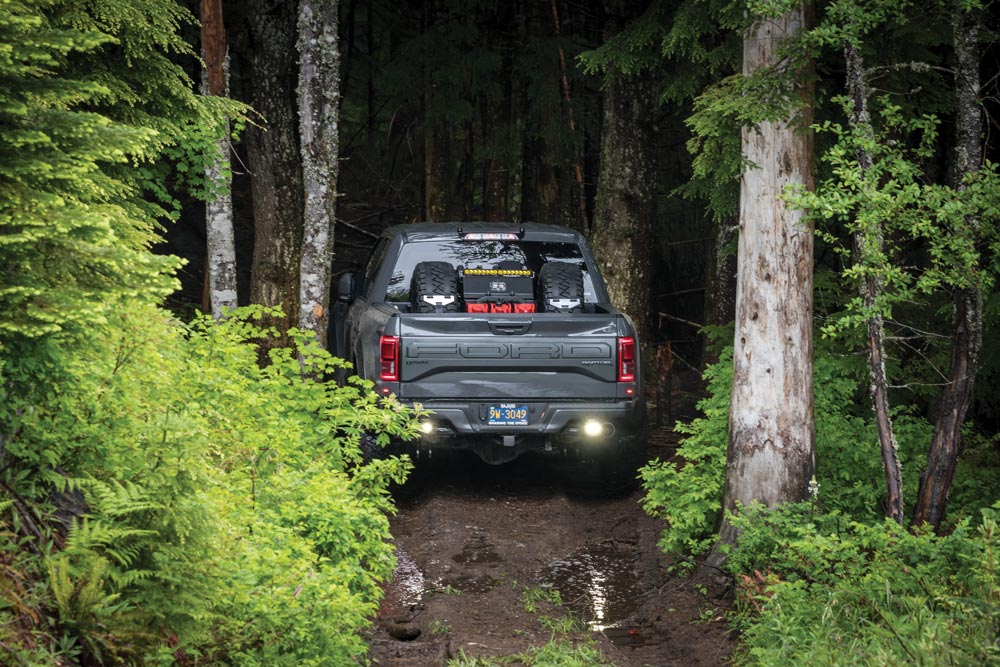 Adventure calls and this Raptor is ready.

After the trip, he hopes there won’t be much to do besides enjoy the vehicle, but Baja can be tough on vehicles, and this Raptor may surely need some attention. A custom graphics wrap is also in the works for post Baja life, with a custom stripe and topo design.

You can expect to see this beautifully crafted Raptor regularly cruising the streets of Portland, Oregon, and hitting the high desert trails in eastern Oregon. You’ll also see it down in Baja from time to time, and might even catch it on the next ABC television documentary about the 2019 Monster Energy Trail of Missions.