Retrospective is an important viewpoint to take in life. You shouldn’t foster regrets, but you should look back on your decision making, what brought you to success or failures. 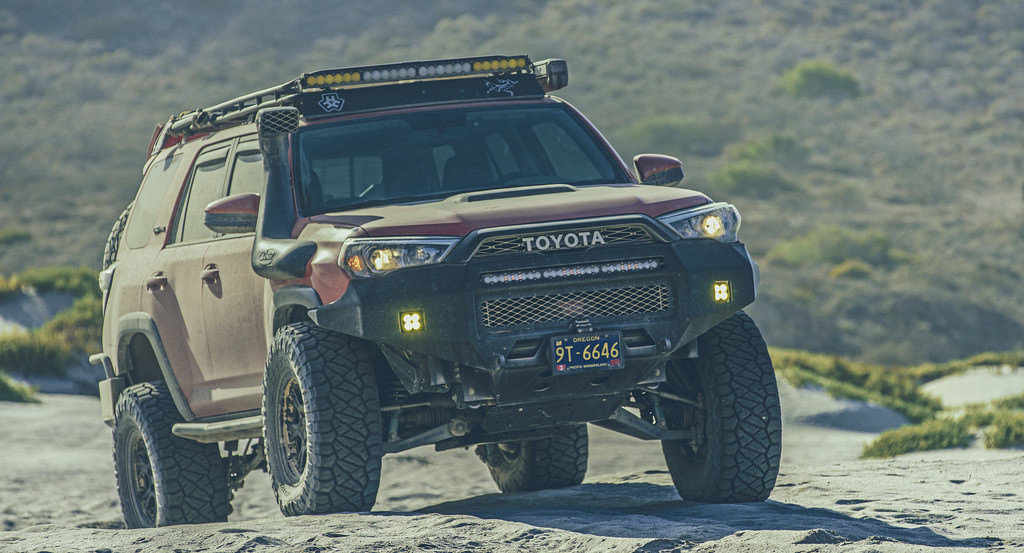 When I started my 4Runner it wasn’t going to be this big of a project. It was going to get some rock sliders, a light bar, and a roof rack, which was retrospectively naive in the same way that saying Tony Montana was just in it to start a small, low-key, pharmaceutical business. But fast forward a few years and, poof, you’re high on your own supply and things are out of control. And I’m going to be brutally honest in my tear down of my design thinking. While the components I originally chose were high-quality, it’s more that my needs changed the more I used the vehicle.

Okay so you’re all blown away by that shocking revelation. But the reality is that “expedition” style vehicles reflect the needs of the owner, as much as they are “projections” of what we want to be doing—or at least perceived to be doing. Be honest with yourself, 95 percent of the year you’re not out camping, but the roof top tent stays on because you like looking rugged, you’re an adventurer.

When I started, a light bar, sliders, and a roof rack probably would have done me solid for the majority of camping I would do in that first year or so. But then you add a winch, because of course you need a winch, and then the vehicle is sagging, so of course you need a better suspension and bigger tires. A certain type of person is drawn to vehicle modifications; the tinkerer. We’re always trying to improve things through what we have on hand, or what we can upgrade through better options. It’s an addiction, and it’s often blinding. The metaphor of losing the forest for the trees is appropriate here.

Here’s my mindset when I started: I wanted a good road vehicle that can go off-road and take me to some fun campsites without becoming too expensive or complex. Here’s where I am now: I want something that can handle complex off-road terrain, such as Baja at faster speeds, and scare road vehicles in front of me into getting out of the way due to the sheer impressiveness of my 4Runner (at least in my mind).

I think I nailed that last part. But in reality, what I ended up with was a vehicle that was in many ways too fat to go fast (without self-destruction), and too complex as a daily driver. For those who have yet to go to Baja, let me basically distill that experience down to this wonderful metaphor; imagine being in a paint mixer for over a thousand miles while you occasionally catch air and try to tell yourself, “Nah it’s okay, that part falling off is replaceable and/or didn’t need to be there in the first place!” Baja isn’t Mars, it’s not running the Dakar, don’t make it into this insane endurance slug fest. If you want to take it at an easy pace, nothing is gonna break. If you want to go really fast off road, prepare to have bolts stretch, fluids leak, and parts shake themselves off.

Okay, so I transitioned from “moderate camping” 4Runner to “I wanna go fast…and camp.” So how did I change my vehicle configuration to streamline for that change in mission? I didn’t, and it sucked, and that’s what lead to a lot of grief, because I was dumb and naive, and admitting it is the first part of solving it.

Ask anyone building their first “overland” inspired vehicle, and they’ll probably point to some configuration based what they see in on a YouTube show, magazine, old travel books, you name it. What you end up with is a vehicle motivated more by “what ifs” than your actual needs based on the results of going out and traveling. The end result is just a lot of stuff that looks really impressive on the street, but becomes too much—too much weight, too many things to fail, too many things to stress about.

If I could rewind and do things again I would wage a war on component weight that would make religious conflicts look tame by comparison. I love my cargo system in my vehicle, but you have to be wary that it’s not an open invitation to pack as much gear in there as possible. I run a Goose Gear drawer system in my vehicle. It’s great, it’s well built, and you should give them money. But it enables some of the worst pack rat, hoarder mentality that lurks inside all of us. “I have this much space, I must pack it to the gills with all of the things.” I carry a 250-piece tool set in the back, why? That’s the result of ‘what if’ mentality, especially given that in the Toyota there’s like maybe 8-10 bolt types at most.

Some of the most common first upgrades people do are roof racks and lights. It’s probably not the right first choice, but whatever. But it’s also easy to get bogged down in that blank canvas of what can get mounted on that rack. If I’m being honest, I have a great roof rack that I don’t justify very well. It’s well designed and built, but I purchased it based on the “what ifs” of carrying gear up top. I don’t carry gear up top. Instead, I mounted a big light bar on it that I’ve found is so bright that its use cases are very specialized. This may be something I remove or re-think as time goes by. At some point if gear does not get used enough, it should be up for debate, or better yet, the chopping block. In a lot of ways this is all just healthy retrospect, but I also think it’s good to solicit trusted outside opinions. Especially those that may challenge your beliefs.

I had a frank and sobering conversation with someone who looked at my wiring and basically stated that it was not good. Nothing was death trap level bad, but rather it was working against me and adding too much complexity. This wasn’t the fault of the shop who did the work. It was a result of shoehorning in electrical upgrades at different times, and lacking consistency or forethought. It has since been replaced by na sPOD controller, rather than the original switch assemblies. Because at the time I said to myself, “I don’t have that many accessories so why would I need an sPod!” So when I had that work done, the shop that reworked it told me they would have preferred to just gut all the wiring and start again, and that their customers typically bring them a brand new vehicle to do everything clean from the start. While I admire this mindset, it’s not really realistic. If you have such a clear vision of your ultimate electrical needs from the minute you roll off the dealership I applaud you, can you also tell me the winning lotto numbers as well?

Bells and whistles are cool, everyone likes bells and whistles, but focus on simplicity. The more I’ve added stuff to the interior of my 4Runner, or the suspension of my vehicle, the more upkeep or distraction it has become. The more complex you make things the more maintaining them will be a challenge. Making your vehicle only heavy as necessary, but as light as possible, can be achieved by just making things modular and easy to add or subtract as the trip necessitates. For a simple camping trip by myself and the dog? Sure, let’s bring basic recovery gear, roof rack, and cargo system. But for when I want to go out to the desert to hoon around I sure would love to pull out 200-250 pounds (or more) of weight in a hurry.

I love my suspension system and 35-inch tires, when they work, it’s great. When something is off, or making a weird noise, it’s frustrating. It’s a sort of race truck-style suspension, and that comes with a lot of maintenance. It also means some big trade-offs in handling. Off road it’s a champ, I love it, I shower it with praise. On road? It’s…interesting, it doesn’t drive like a stock vehicle (for better or worse), and it means it’s a really intensive and a hands-on drive. This can make a 10-hour road trip feel like 15 plus. If you drive long distances yeah maybe that’s a knock against it. I’ve also done my best to have the suspension built to accommodate the amount of weight I carry, but I also know that same weight is also working to diminish the ride quality that the suspension is cable of providing.

The more I can remove from the vehicle what is not necessary, the more I can add to peace of mind from having less to worry about breaking. When my vehicle hits a ‘whoops’ at 60mph I like being focused with the sounds the vehicle makes from a mechanical standpoint, not the sound of a bunch of doodads flopping around somewhere in the cab, or if some externally mounted piece of gear is still tight. The simpler I can make my vehicle, the less I have to worry about, which in turn means the less that breaks, which in turn means the more fun I have on a trip because I’m not stressed about dumb things.

In the end, my biggest lessons learned have been identifying the time wasted looking for good solutions to problems that never existed in the first place. Finding ways to carry gear that didn’t get used, or adding weight for items that should have been replaced with simpler and more modular alternatives. Ultimately, we get into a mindset where we start justifying these things that we think we’ll need (the what ifs), without stopping to evaluate after each trip if we used them or not. Be honest with yourself and be willing to admit something didn’t work, or just wasn’t needed. There’s no shame in selling a piece of gear and looking for that lighter, simpler, and better alternative. Or even more shockingly enough, just getting rid of that piece of gear completely. Simplicity and efficiency will always beat complex, no matter how well it’s built.